Lakes and reservoirs of the world

What is a lake? Naturally occurring body of water not connected to the sea – but this is not an exact definition, because there are a number of lakes which appeared under very mysterious circumstances. Currently it is estimated that there are more than 5 million lakes on earth, and in Russia there are more than 2 million such reservoirs. And many of them contain secrets and ancient artifacts.

Dabakhtay-Nur is situated in the central part of the Tazheran steppe, it is separated from Baikal by 11 km, it is about 0.5 km wide and 3 m deep.

Geyzero Lake is located in the Eastern Altai, near the village of Aktash, is a unique body of water and has no analogues in Russia.

The trip to the Shavli Lakes is not a trip at all for a tourist, the trip to the mountains will be a serious trial, but it will be more than off-set by the beauty of the Altai Mountains and the crystal-clear lakes.

Lake Rublevka, located in the Chemalsky District of the Altai Mountains, is a vacation spot for the whole family, and the surrounding lake offers comfortable conditions for living and recreation for all tastes.

Nature, climate, wildlife and interesting facts about one of the most impressive lakes in the world, which is famous for incessant lightning.

Vologda region is famous for a huge number of fresh natural and artificial reservoirs, and most of the lakes are concentrated in the Kirillov district.

Lake Sonkol is located in the Tien Shan Mountains at an altitude of 3016 m above sea level in Kyrgyzstan and has an area of 278 square meters.

Rybinsk Reservoir is an artificially created body of water in the north of Yaroslavl Oblast, bearing the unofficial name of “Rybinsk Sea”.

Going to rest in Altai, the traveler should consider Lake Aya as the goal of his trip. Altai nature, lots of tourist bases, elite play area.

Teletskoe Lake and its surroundings is a unique natural attraction in Siberia, the lake stands out for the purity of its water and the unspoiled nature around it.

Hatta Rock Lakes is a UAE tourist attraction located in the exclave of Hatta. It is of interest to foreign tourists, locals and scientists.

The Caspian Sea is the largest confined water body on the planet. But its classification is more difficult.

Garda is the largest lake in Italy and the cleanest in Europe. On the shores of Garda there are many towns and villages, merged into a huge resort area.

Lake Como located in northern Italy is the perfect combination of spectacular scenery and a variety of recreational activities.

Lake Constance in the foothills of the Alps on the border of Germany, Switzerland and Austria, a great place for recreation and recovery

Lake Pichola the amazing lake of Rajasthan, it is surrounded on all sides by hills, palace complexes, places for ritual ablutions and other shrines.

One of the mysterious places is the Austrian park-lake Gruner See, which translates to “Green Lake.”

Top 25: Incredibly beautiful lakes from around the world

When someone says that he has seen the most beautiful lakes in the world, which ones come to your mind? If when you mention lakes you only think of an old pond you played by as a child, or the Loch Ness Monster, then you obviously don’t know much about the most famous lakes on our planet.

These incredible bodies of water are located in different parts of the world, so somewhere you could use a bathing suit, and in another place – an ice drill and a warmer jacket, but everywhere you will be amazed by the greatness of nature and its indescribable charm! Maybe after seeing this selection you’ll want to buy a plane ticket and see one of these lakes with your own eyes. 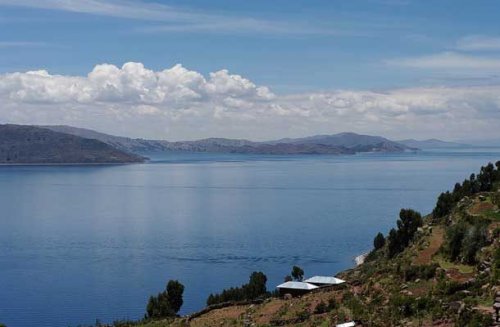 The highest navigable lake in the world is located in the Andes on the border between Peru and Bolivia at 3,811 meters above sea level. Titicaca is famous for its man-made floating islands built and inhabited by the Uru (Uros) Indian people. 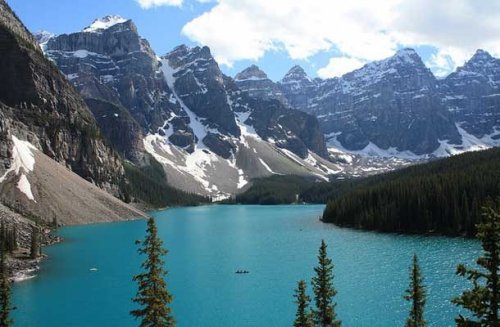 There are a lot of lakes in Canada but this unbelievably picturesque place was even once featured on the Canadian $20 bill. Glacial Lake Moraine is located in the Ten Peaks Valley and reaches its maximum depth and fullness for just a couple of weeks a year in late June during the most active glacier melt. 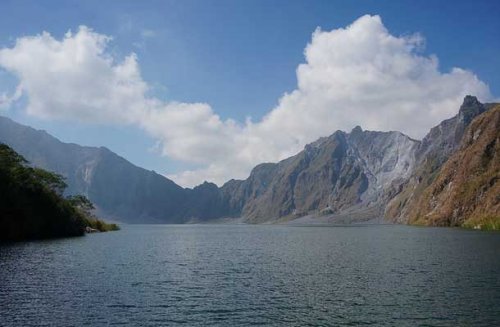 The reservoir was formed in 1991 after a strong monsoon. The crater lake Pinatubo is located at the top of the Pinatubo mountain, which is still an active volcano. 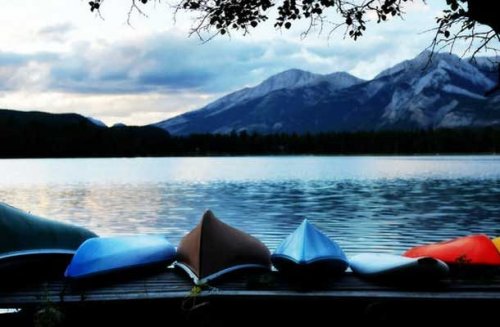 Lake Annette is one of the wet sols (saucer-shaped troughs), of which there are several in Alberta. It’s an ideal spot for picnicking, fishing, scuba diving or just stargazing. 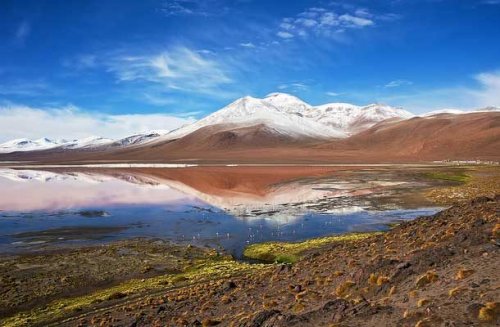 This amazing lake is located 4,200 meters above sea level in southwestern Bolivia and it owes its red color to mineral sediments and local algae. Laguna Colorado is a shallow body of water, with an average depth of about 50 centimeters. 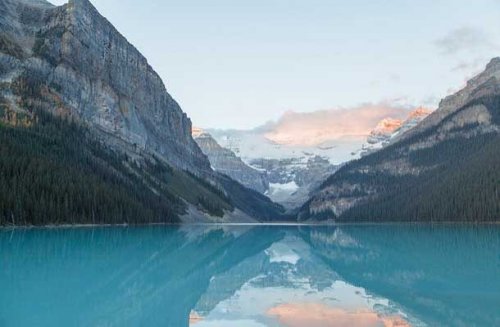 Also called Little Fish Lake, this pool is located in Banff National Park. The area around the lake is just a great place for hiking and camping, rock climbing, kayaking and canoeing. 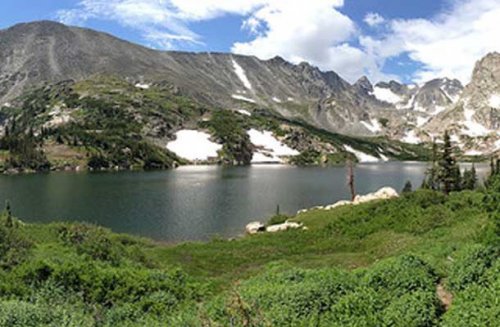 Isabelle Reservoir is located in Indian Peaks, Colorado, and its shoreline is very popular with hikers. It also has gorgeous views of the Navajo and Apache Mountains. 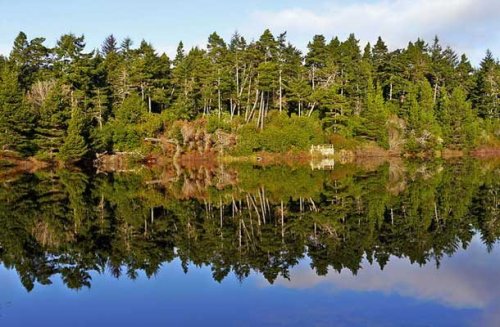 This lake is located high in the mountains. The local scenery is easily distinguished by the 2 small islets in the middle of Crater Lake, and it has become almost a favorite destination among nature lovers in Oregon. What’s more, Crater Lake has even been designated a U.S. national park. 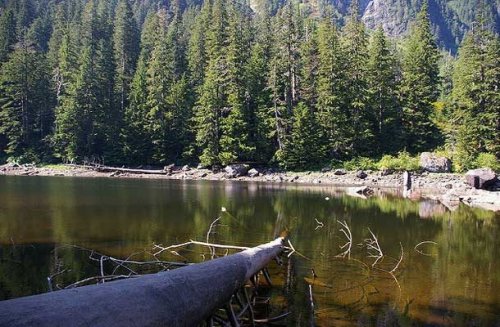 Forest Lake Barclay is surrounded by many hiking trails and people often come here to fish or just to relax in the campsite. 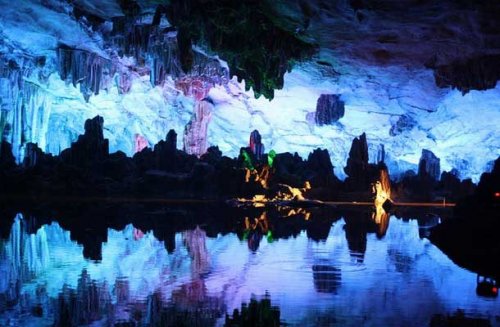 This limestone cave is located in the Guangxi Autonomous Region of China and is estimated to be over 180 million years old. It was rediscovered in the 1940s by sheer coincidence, and since then it has become world famous for its stalactites and unique colored lake. 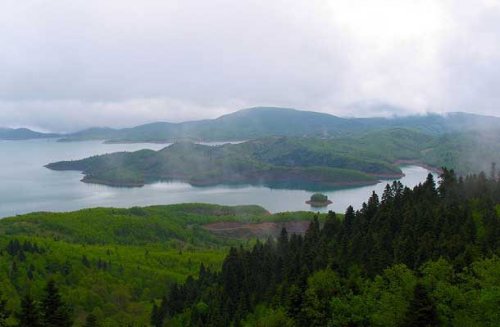 The reservoir has about 400 million cubic meters of fresh water and is considered one of the highest in Europe (800 m above sea level). The lake has become a very popular tourist destination because of its unique landscapes. 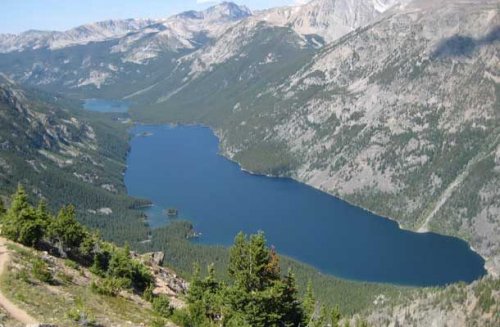 This is the largest lake in the Beartooth Mountains of Montana, and all nature lovers and hikers have incredible scenic and spectacular trails to explore! 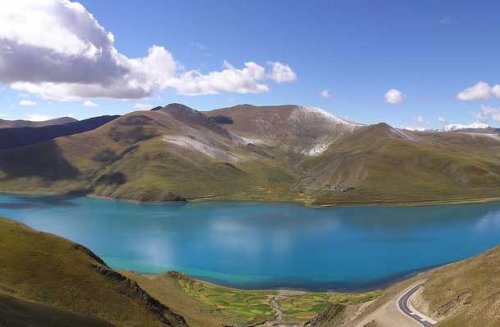 This unique lake is 72 kilometers long from edge to edge and is surrounded by snow-capped peaks. In 1996 a hydropower plant was built here, which became the largest in the whole of Tibet. 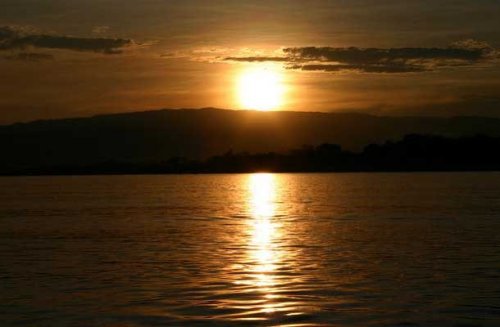 It is the second deepest lake in all of Africa, and more animal species live in its tropical waters than any other freshwater body in the world. Because Malawi has a unique geology and is inhabited by a variety of creatures, the lake has been designated a nature reserve and national park. 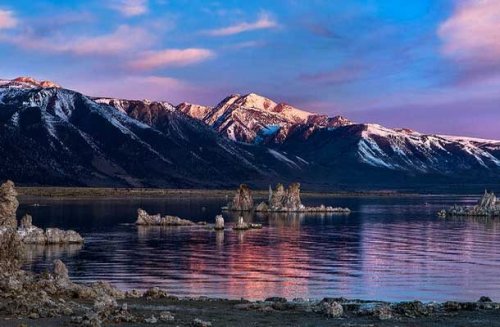 This shallow lake is located in the middle of scenic mountains in Mono County, California. It was formed over 760,000 years ago and because of its salinity it has a rather similar ecosystem to Laguna Colorado (21 points). 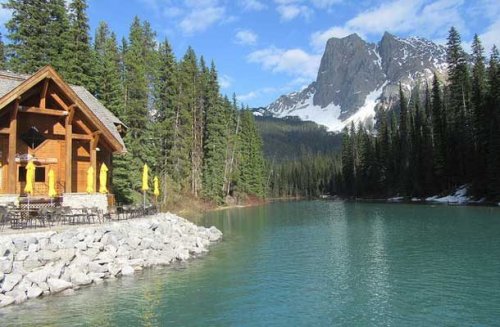 If you want to enjoy the mirrored reflections on the water’s surface, don’t come here between November and June, while the lake’s surface is under a layer of ice. It is during the summer months that the water in Emerald is colored in the most incredible shades of turquoise and blue due to the fact that the bottom of the lake is covered with white sediments of various minerals. 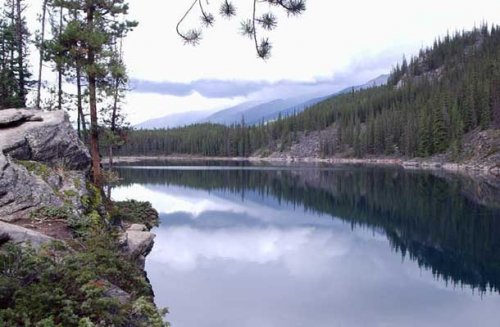 This is another amazing Canadian lake. The coast of Horseshoe is very rocky, which makes it a favorite place for high jumpers. Although the local water is actually quite cool for swimming. 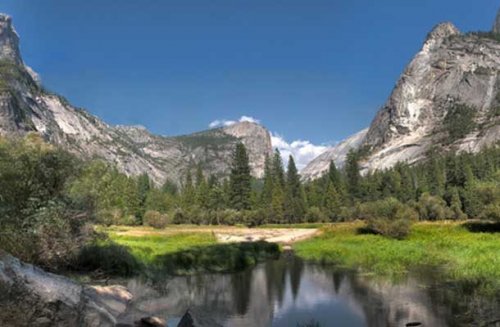 Mirror Lake is a small lake in the famous Yosemite National Park which is located between two majestic granite domes – North Dome and Half Dome. The views are mind-blowing from any angle. 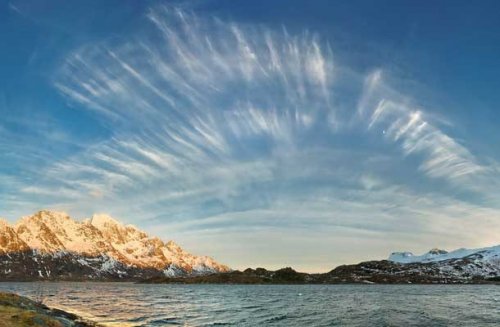 There are about 450 thousand freshwater lakes in Norway, and this is one of them, and it is fed by glaciers. Norway is full of surprises and beauties, so you must go there! 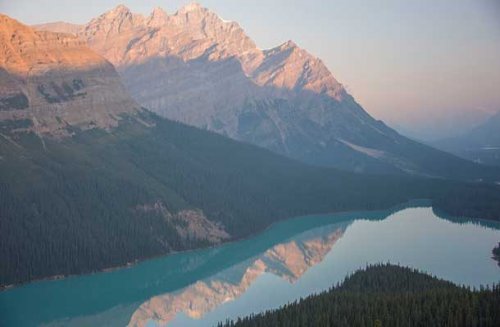 This famous glacial lake is located in one of the Rocky Mountains National Parks. Peyto is a natural wonder of heavenly color and unusual shape! As you’ve probably noticed by now, Canada is full of beauties that can easily drive you crazy. 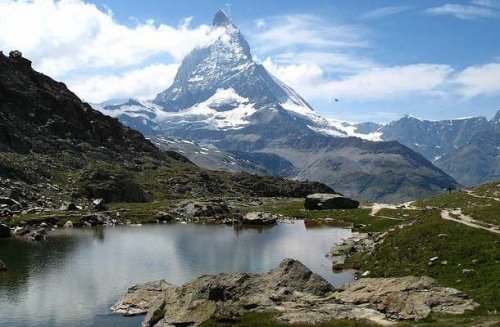 In the background, many recognize the legendary Matterhorn Alpine peak. On the coast of the Riffelsee you can enjoy simply unbelievably beautiful views! To see as much of the scenery as possible, just buy a train ticket on the Gornergratbahn directly to this amazing lake.

READ
Djibouti - the Republic of Djibouti state in East Africa 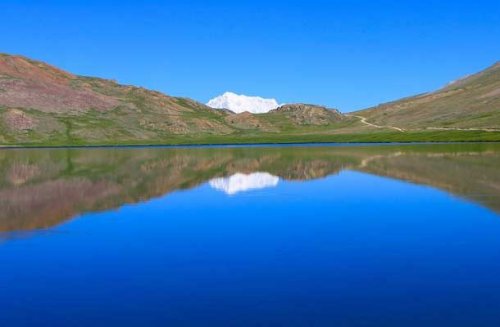 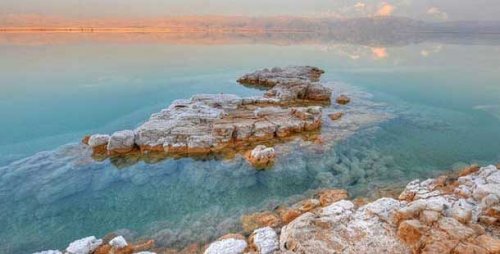 It is called the Dead Sea because this lake is so salty that no animals swim in it and no flora grows in it. The Dead Sea is the deepest of the world’s salt lakes. It has a salt concentration 8 times higher than the ocean, which is why it is almost impossible to drown in it and so easy to stay afloat. 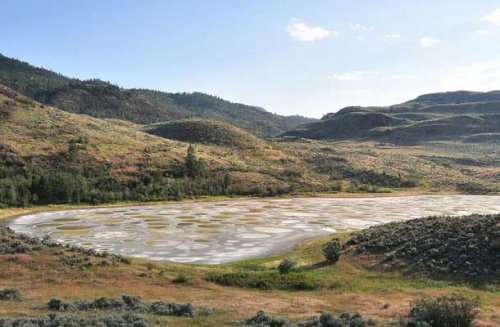 This strange lake is located in British Columbia, not far from the town of Osoyoos. The bizarre spotted look is due to the fact that in the Spotted Lake there is almost the highest concentration of minerals, sediments of which form the wonderful spots of different colors. 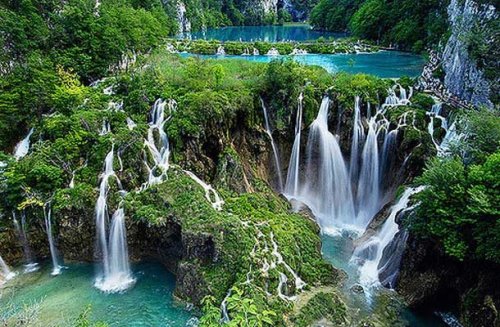 The Plitvice Forest Reserve is famous for its cascade of as many as 16 different lakes connected to each other by waterfalls. The natural dams are densely overgrown with moss and algae, making it one of the most picturesque national parks in the world.