A 12-meter-long steel pedestrian bridge opened in Amsterdam on July 15, 2021. Seemingly nothing out of the ordinary. No one is surprised by bridges in Amsterdam. But unlike other steel bridges around the world, this one was 3D-printed. 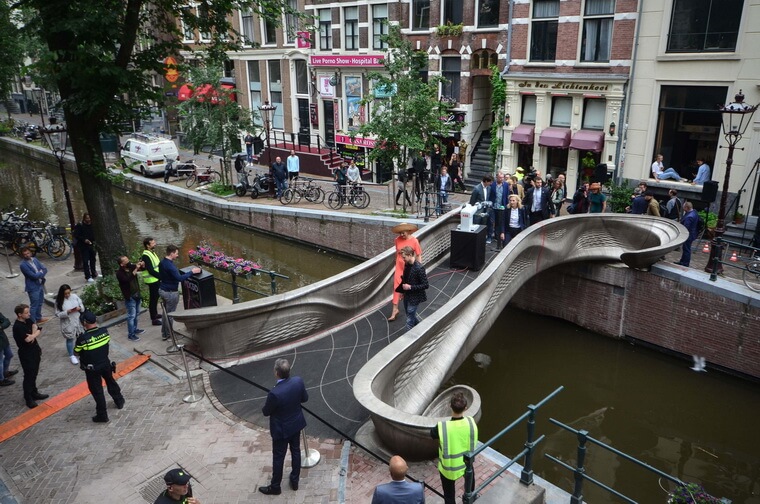 And here is the queen of the Netherlands herself.

Who printed the bridge and how

This first-of-its-kind bridge is made using stainless steel rods. They are welded into a single structure by a robotic system in the workshop of the Dutch technology company MX3D in collaboration with the engineering firm Arup.

Interesting fact – sometimes the bridge is called “MX3D Bridge” after the name of the manufacturer.

The bridge was built with the help of six axle robotic arms, equipped with welding equipment.

This is how it was possible to “print”, or rather weld, a steel bridge.

The idea for this unusual bridge came to Joris Laarman (founder of the Dutch studio Joris Laarman Lab) after combining robotic arms with welding machines for a machine capable of printing furniture.

The bridge has undergone many changes since the project launched in 2015.

The original plan was to print the structure across the canal right on site. The robots were to work from both banks and meet in the middle of the canal.

In the end, the bridge was printed separately and then set in place with a special crane. 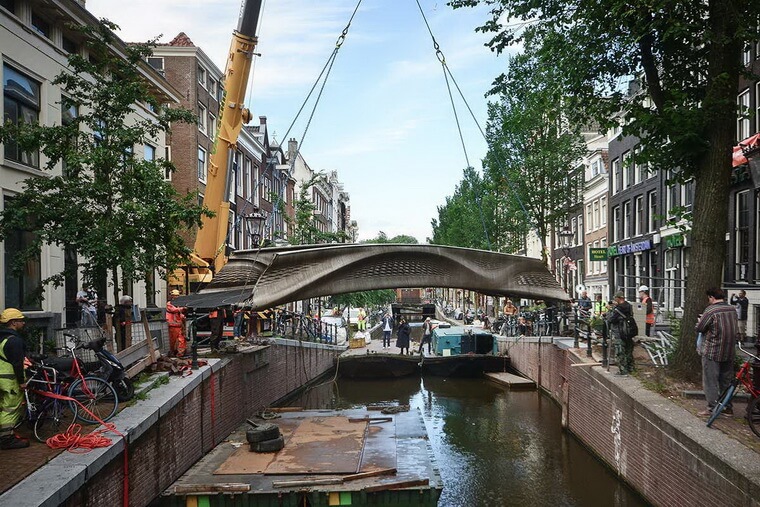 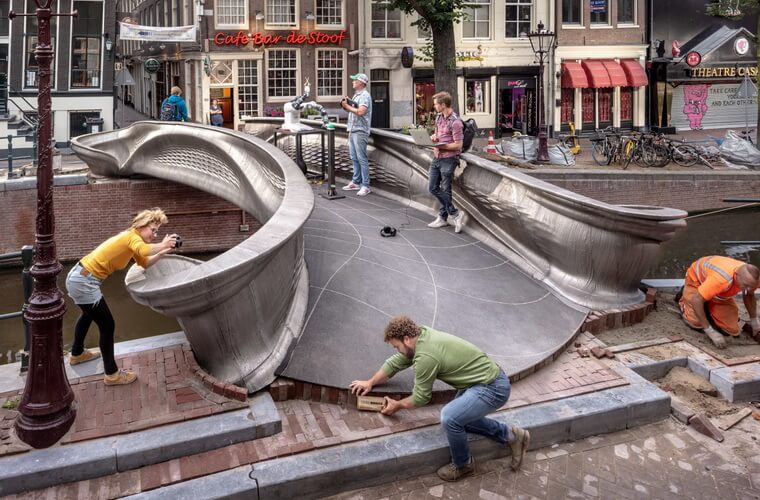 Final installation of the 3D-printed bridge

What else is interesting about the printed bridge

The curved S-shape of the bridge and the lattice perforated balustrades were designed using parametric modeling software. The development team, says this 3D printing technology could lead to more efficient designs that use less material. 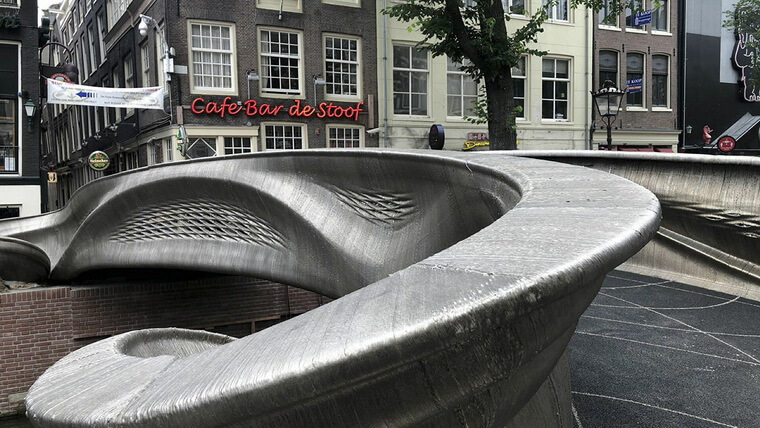 Perhaps we will see more of these unusual bridges in the future.

In addition to its main function, which is the ability to cross the canal, the bridge is a living laboratory with a whole network of various sensors. They collect data about the bridge’s performance in real time.

Every time someone walks, runs or cycles across the bridge, the sensors read the information. It’s then used to monitor the structure and the condition of the bridge. The sensor system measures voltage, displacement and vibration of the steel structure. They also measure air quality and ambient temperature. All this data is used to create a digital replica of the bridge, which will mimic a real bridge. This will make it possible to predict the behavior of the bridge in the future, and at the earliest opportunity to inform the developers of the need for maintenance.

But that’s not all. Collecting data will allow engineers to understand how steel structures created by 3D printing can be used for larger and more complex construction projects.

Take a look at the very interesting Moses Bridge. No 3D printers were used, but the effect is spectacular.

What do the engineers say

“A 3D-printed metal structure big enough and strong enough to handle pedestrian traffic has never been built before. We tested and modeled the structure and its components throughout the printing process and upon completion, and it’s fantastic that it’s finally open to the public,” says Leroy Gardner, a structural engineer at Imperial College London.

“3D printing opens up tremendous opportunities for the construction industry, providing much greater freedom in the choice of material properties and shapes,” Gardner added. “This freedom also comes with a number of challenges and will require civil engineers to think in new ways.”

Tim Gertjens, MX3D’s technical director, said the project’s success has important implications for the future of architecture. “If you want to have a really beautifully designed bridge or a really aesthetically pleasing bridge, suddenly printing it will be a good option,” he said. “Because it’s not just about making things cheaper and more efficient for us, it’s about giving architects and designers a new tool – a new very cool tool – with which they can rethink the design of their architecture and their projects.”

Interesting fact – Despite the modernity and uniqueness of the bridge, it’s not here to last. The bridge was unsealed and installed for only two years, until the old bridge formerly spanning the canal at this location was repaired

Subscribe to the author if you like his publications. Then you will be notified of his new articles.

You can always unsubscribe from notifications in the author’s profile.

A long-suffering project by the Dutch company MX3D is finally coming to fruition: an all-metal structure made by a robotic 3D printer using arc-fusion technology has been thrown over a canal in the center of Amsterdam. All that remained was to install the sensors and weld the missing elements. 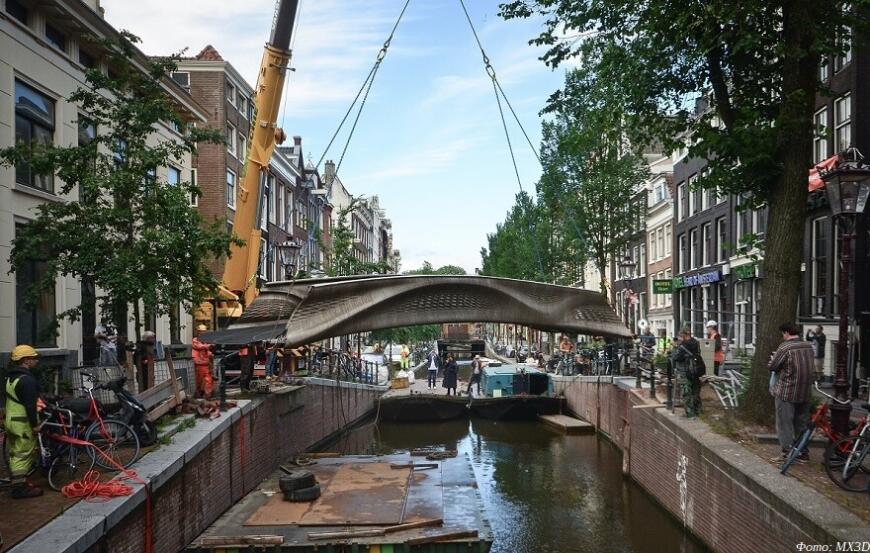 The project took nearly six years to implement. In addition to the obvious difficulties in working out the production technology, the company encountered other obstacles. Work on the steel structure itself was completed back in 2018, after which the bridge was put into storage pending the completion of the waterway reconstruction, as municipal authorities feared that the old masonry might collapse under the weight of the new structure. Then a covid surprise from Wuhan arrived, and only now has the bridge finally decided to be installed in its designated place. 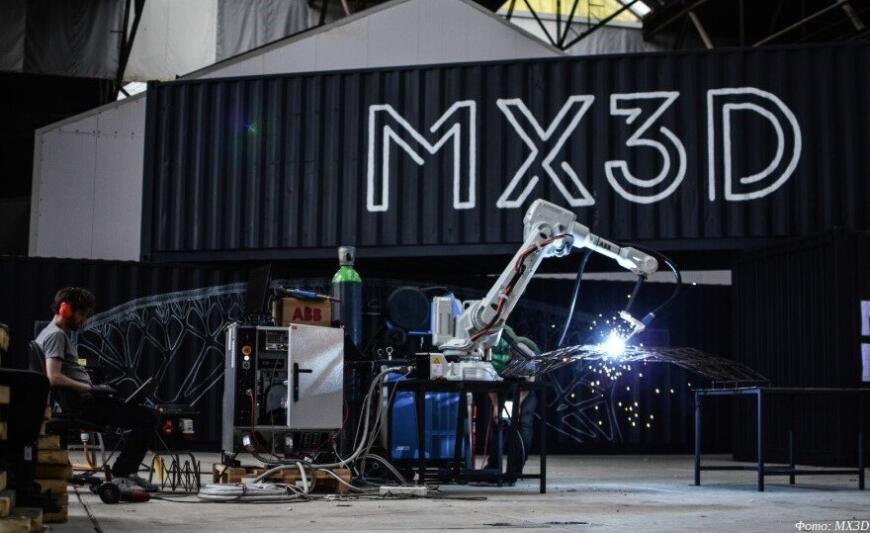 It is an all-steel construction made by a multi-axis robotic arm with a welding machine. The consumable material, of course, is a conventional welding wire, with a capacity of about two kilograms per hour. These are the main advantages of the technology of additive manufacturing by the method of electric arc deposition or WAAM (Wire Arc Additive Manufacturing): this scheme is much faster and cheaper than technologies of laser or electron-beam synthesis on the substrate that use expensive fine powders, besides, there are no severe restrictions on the size of printed products. On the other hand, resolution is low and compatibility with various metals and alloys is limited, but in this particular case both material and resolution are well suited to the task at hand. 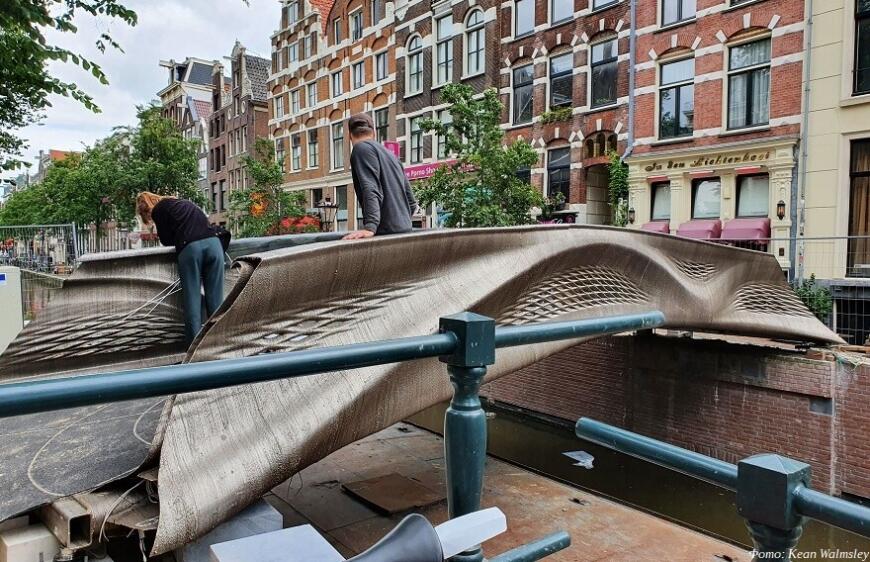 The design was created with Autodesk Dreamcatcher CAD and topology optimization, which allowed the weight of the 12-meter bridge to be reduced to about 4 tons. 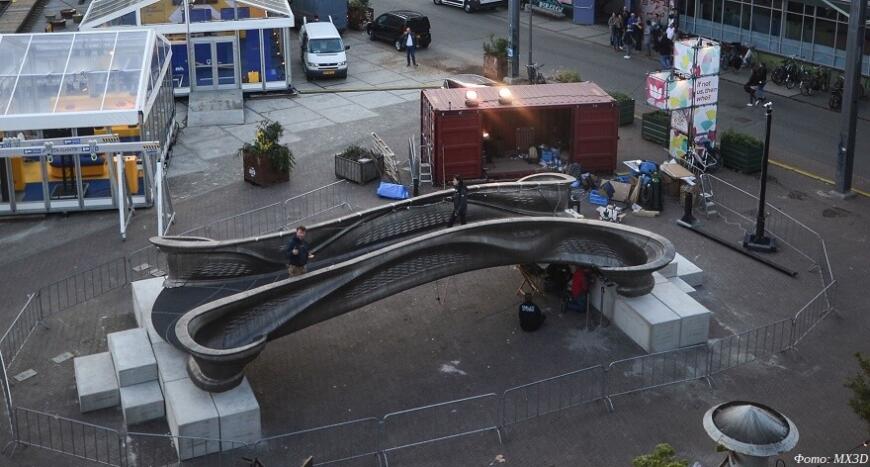 The design involves the installation of multiple sensors which will monitor the structural integrity, vibrations, deformations, loads and weather conditions. All this will help on the one hand to ensure the safety of the pedestrian flow, and on the other hand to improve the design methodology and 3D-printing algorithms for future projects. 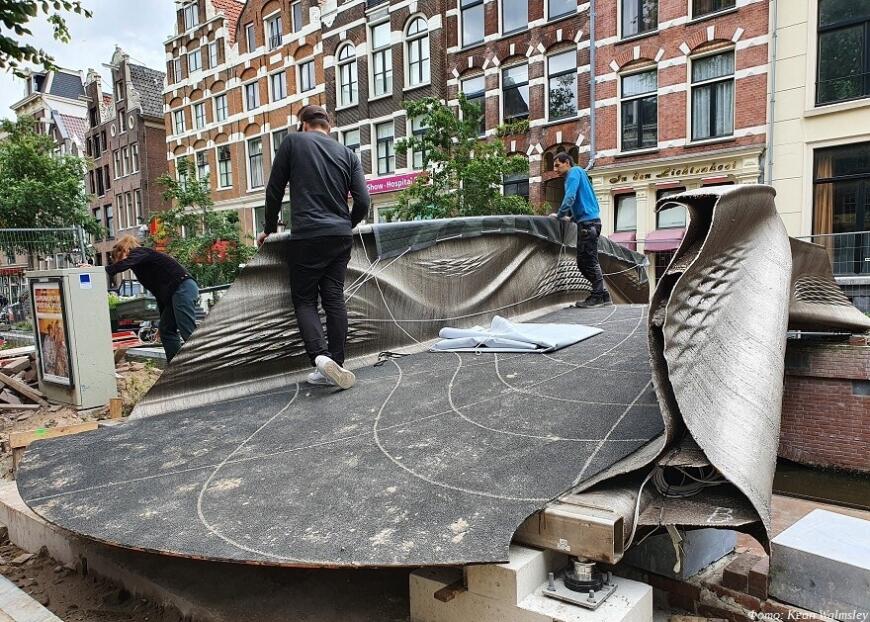 As for algorithms, MX3D is offering its software developments on the commercial market from 2019. This is partly a forced measure, as the company faced serious financial difficulties due to the low return on investment and high R&D costs. The guys decided to get additional income from licensed sales of the Metal XL software package, which provides support for the full cycle of additive manufacturing using WAAM technology – from design to 3D printing. 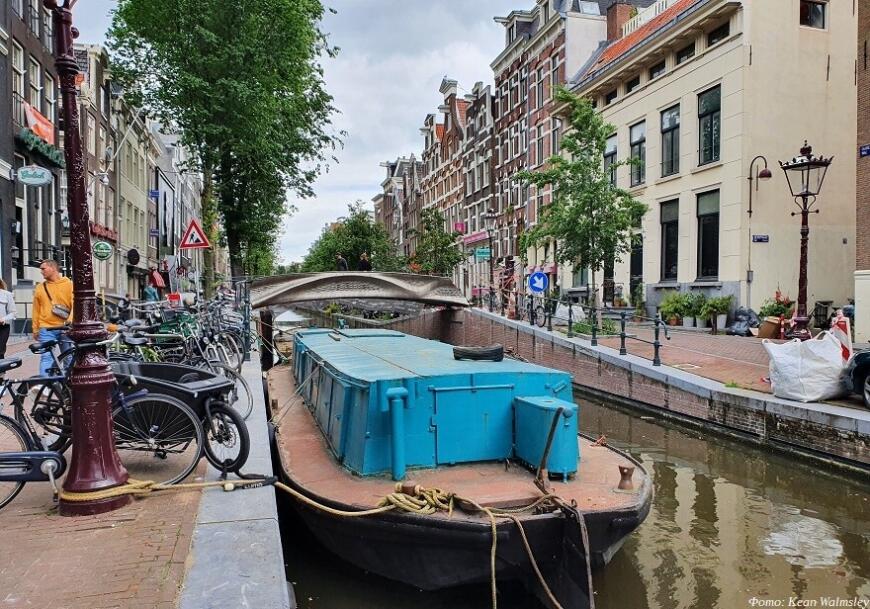 It will take a few more days to install sensors, put the finishing touches on the welding machine and test the structure, and the bridge is scheduled to be put into operation in the second half of this month.

Do you have any interesting news? Share your developments with us and we will tell the whole world about them! We’re waiting for your ideas at news@3Dtoday.ru.

Subscribe to the author if you like his publications. Then you will be notified of his new articles.