6 bridges into the future: China is no longer catching up in difficult but impressive construction

Receive in the mail once a day one of the most read articles. Join us on Facebook and VKontakte. 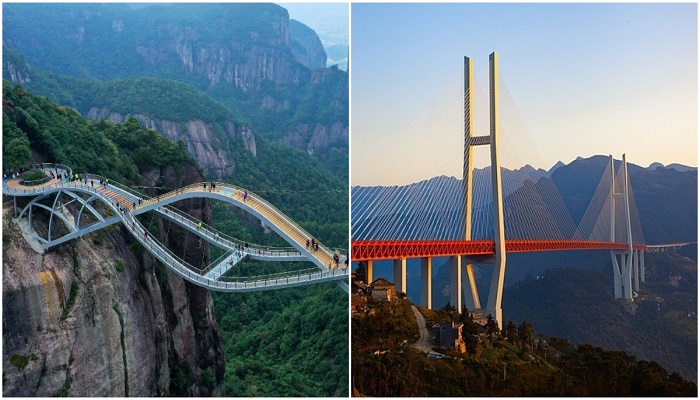 No one is surprised by the achievements of Chinese industry, architecture and science, but every time the construction of a grandiose facility is completed, no one is left indifferent. Take, for example, giant bridges, which have long moved from the category of engineering structures, in the architectural masterpieces. Their design, grandeur and futuristic shapes make them ultramodern works of art with impressive and innovative implementations, which arouse only admiration and quiet envy.

1. the Ruyi Glass Bridge over the Abyss (100 meters long) 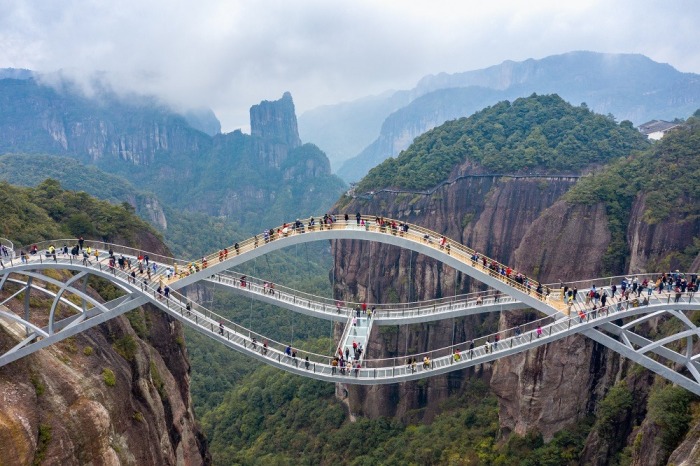 In 2020, Zhejiang province inaugurated the mind-blowing Ruyi Glass Bridge, a pedestrian bridge that few people still believe exists. The reason for this attitude was the fantastic design of winding pedestrian platforms, which hover 140 meters above a deep gorge. Despite the fact that this unreal tourist crossing is called a glass bridge, fortunately for most visitors, not the entire platform is transparent, but only in the center of the attraction so that extremists can get their portion of adrenaline. 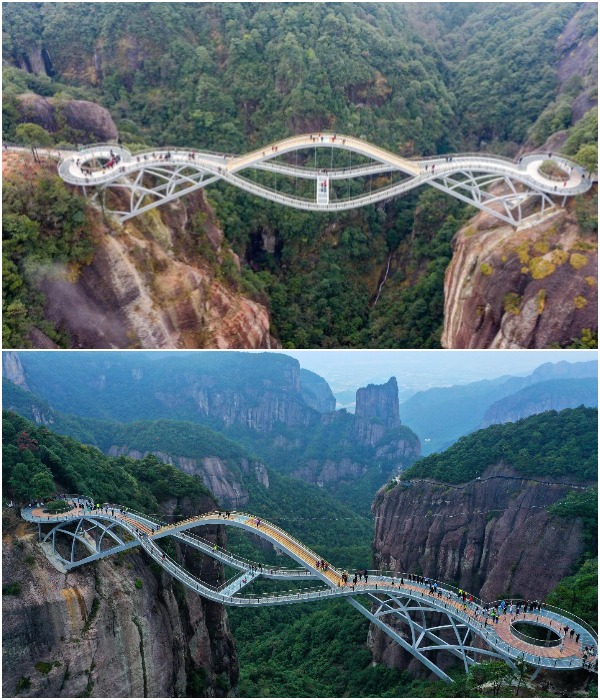 Ruyi glass Bridge has become the most visited tourist attraction in Shenxiangyu (Zhejiang).

For the rest of us, a walk along the ornate paths over the precipice (with transparent railings) and the breathtaking scenic nature, which can be admired from a bird’s-eye view, is enough. It is fair to say that the unrealistic forms of the bridge, installed between the tops of the mountains, in a short time attracted about 200 thousand tourists and this despite the pandemic and quarantine restrictions. 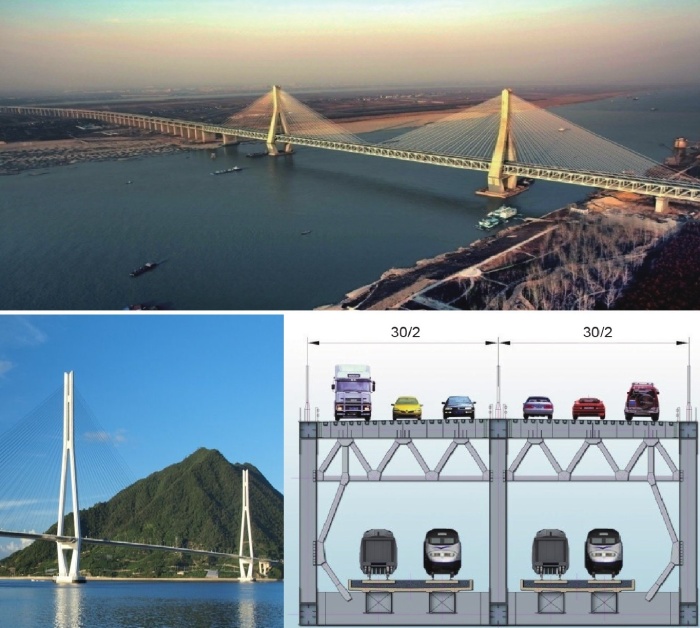 The Hutong Bridge, which connects Zhangjiagang and Nantong, was opened in June 2020 (China)| Photo: roadtraffic-technology.com.

Despite a pandemic that forced a halt to all construction work, another bridge was opened in Jiangsu province, connecting the Zhangjiagang-Nantong Expressway and the Shanghai-Nantong High-Speed Rail Link. The strategically important facility that reduced the route from 3.5 hours to 1 hour has fantastic characteristics. The total length of the bridge is 11,072 m, with a width of 22.5 m, the height of the main pylon reaches 330 m (110-storey building) with a main span length of 1,092 m. The last two positions are world records (relative to cable-stayed bridges). Due to the weighty dimensions, the two-component crossing has 6 highway lanes (on the upper level) and 4 lines for rail transport (on the lower level). 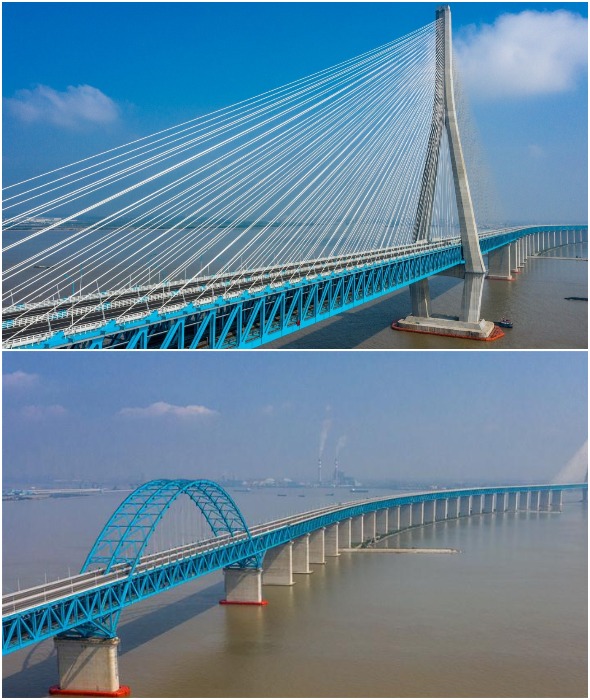 Advantages of the facility: As this is one of the last grand bridges to be commissioned (20. 06. 2020), it is not surprising that a number of innovative technologies were used in its construction. Among them can be noted: the system of warning of collision of a vessel with the support (the warning is activated within 3 km), the use of steel cables with the highest tensile strength (in the world), reinforced supports, allowing to withstand a typhoon 13-ball and the impact force (in case of ship accidents) weighing up to 100 thousand tons.

Above the clouds: In the province you can drive over the world’s highest suspension bridge (Beipanjiang bridge).

Most people are used to extreme suspension footbridges by now, but if you imagine cars rushing over the ground at 80 km/h at 564 meters, most of us would definitely feel uncomfortable. But for the province of Guizhou this exorbitant attraction was extremely necessary, because its entire territory is a continuous “roller coaster” and in order to connect some regions you have to resort to large-scale and very costly construction.

Remark: Chinese engineers and bridge builders managed to build the highest suspension bridge in the world with a length of 1,341 km in just three years, which to this day is considered one of the most technically complex and unique engineering structures in the world. 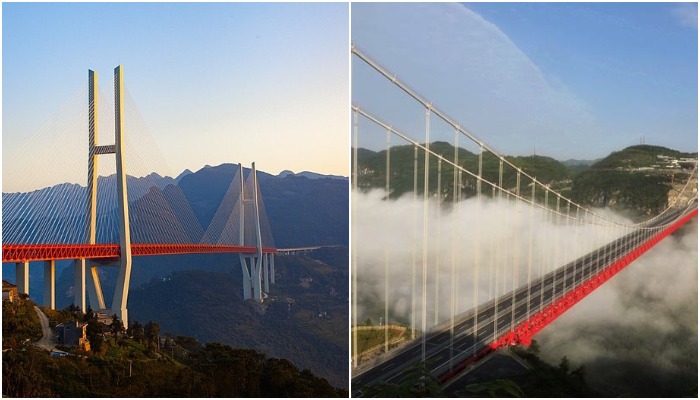 Interesting fact from Novate.ru: 50 years ago in China, specialists from the Soviet Union were invited to build bridges. In close cooperation, the first grand bridge across the Yangtze River was built, which marked the beginning of the bridge building industry. Now in the country annually by local companies are built at least a thousand crossings of varying complexity and length. It is also worth noting that Chinese bridge-building companies are involved in projects implemented in many countries around the world.

READ
Kelimutu. Three-color lakes in Indonesia on the island of Flores 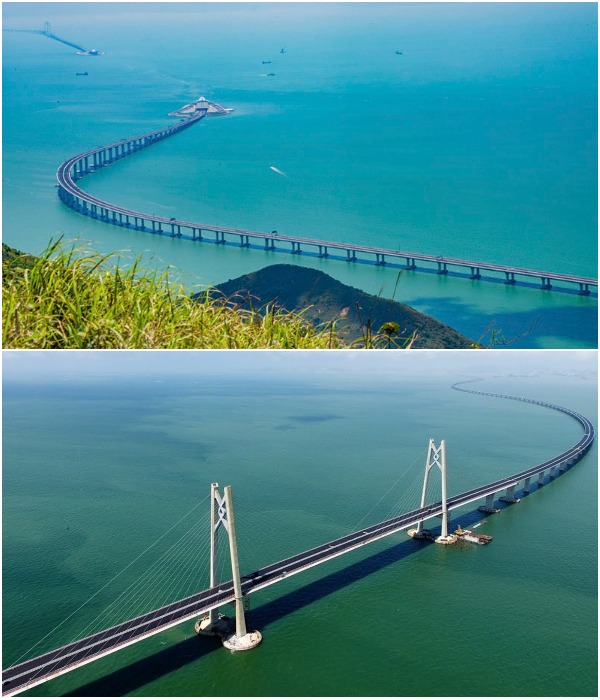 The bridge is incredibly complex and is one of those structures that have broken records in several nominations for the title of “the best”. It is difficult to list all the innovative implementations used in the construction of a giant facility, which over the water surface of the South China Sea and under it connected Hong Kong – Zhuhai – Macau. 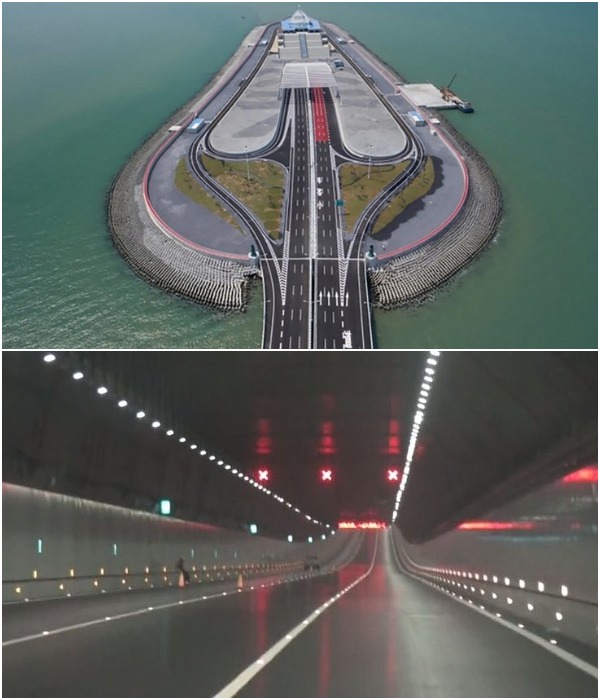 Although the complex did not break the distance record (the total length of 55 kilometers), still amazes with underwater tunnels, artificial islands and unprecedented constructions, which can withstand the onslaught of the elements and man-made disasters. The developers promise that the bridge complex can withstand 8-point earthquakes, the most powerful hurricanes and typhoons, and even a collision with multi-tonnage vessels. 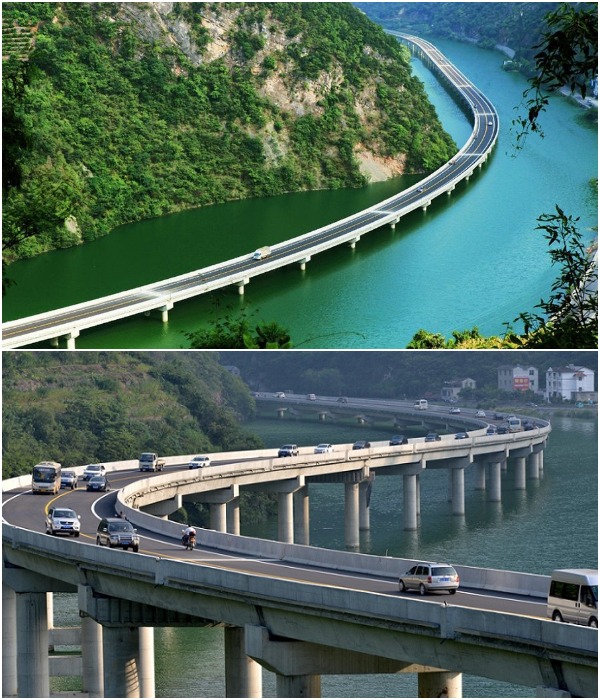 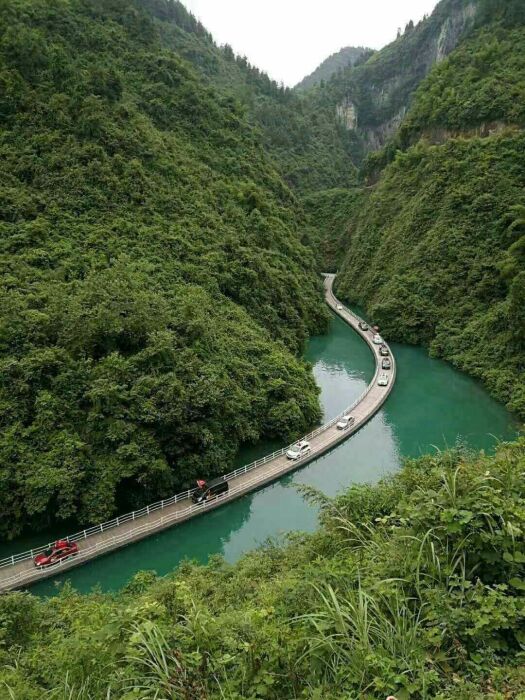 Hubei province has built an amazing bridge that follows the intricate twists and turns of a river bed. The Over-Water highway bridge, designed to significantly shorten the route between hard-to-reach settlements, became a stumbling block (local farmers refused to sell their land), which led to a change in the project. Despite such a scandalous beginning, the bridge has only benefited from the changes, as it turned out to be the first structure in the world to go over the river instead of across it. For now, the Over-Water Highway Bridge is the region’s main attraction, as few can boast such views and masses of incredible experiences from an ordinary road trip.

6. Zhuchanghe Bridge – A 672-meter girder bridge over the deep gorge of the Zhuchanghe River 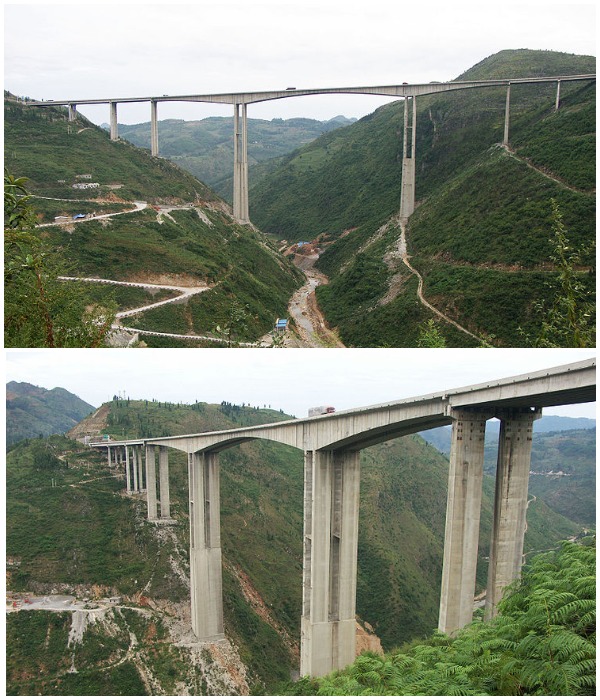 The Zhuchanghe Bridge super bridge over the Zhuchang River joins the Shanghai-Kunming Expressway in the province of Guizhou.

The impressive girder bridge spanning the Zhuchang River (hence the name Zhuchanghe Bridge) is the second highest arched bridge in the world (after the Millau Viaduct in France), with a maximum span of 200 meters between piers. At the moment it is one of the 60 highest crossings over the deep V-shaped gorge. Its maximum height reaches 224 meters. It is difficult to imagine what it is like to drive on the bridge when there is a 70 meter high cliff below you, but nevertheless it connects the Shanghai-Kunming Expressway which makes things a lot easier. 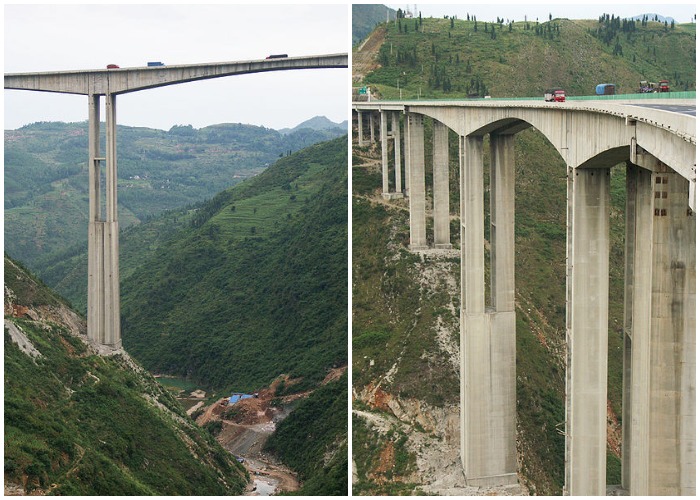 Structural features: Pre-stressed reinforced concrete structures were used in the construction of this technically highly complex structure, which is extremely strong and resistant to external influences. Unlike most of the multilevel girder bridges in China and in the world, the lower part of the Zhuchanghe Bridge piers are solid and the upper part is bifurcated, with thinner shapes. This allows them to easily withstand the raging waters of a river that looks more like a stream in the dry season, but turns into a roaring torrent when there’s a flood, destroying everything in its path.

Our new video explains why stores in military units are called Chipok:

The Chinese care not only about conquering mountain tops and the sea with bridges, but also about the environment. Here in the near future there are plans to build an impressive eco-resort, which will fit perfectly into the coastal sea zone, will not have a detrimental effect on the environment and will help maintain the health of the population.

The Longest, Most Amazing and Spectacular Bridges in China

The People’s Republic of China always amazes with the scope of its constructions. Apparently, after the Great Wall of China, they can’t stop, and they need all the best. Bridges in China attract special attention . If you go to Wikipedia with the question “the longest bridges in the world,” you can see that 12 of the 20 are in China, and occupy the top three positions. In this article we will tell you about the most exciting of them. 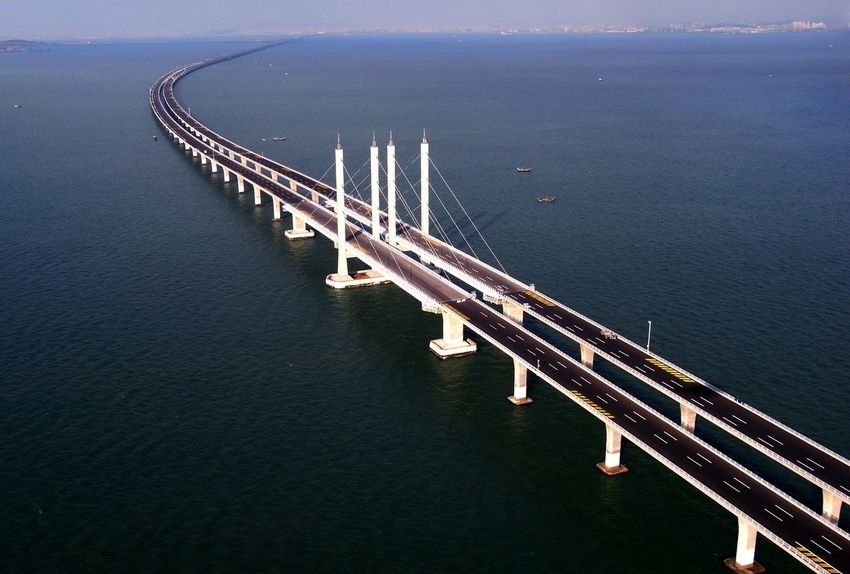 We will start with the longest bridge in the world, which is included in the Guinness Book of Records. The bridge is 164.8 km long. The most amazing thing is that the construction took only two years, the construction period from 2008 to 2010. 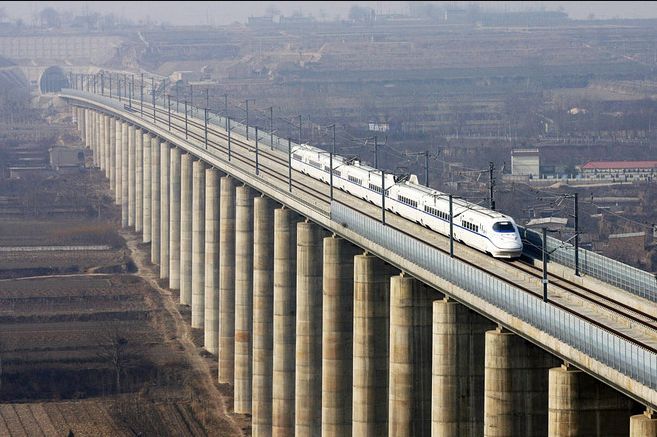 The Danyang Kunshan viaduct is located in the east of the country in Jiangsu province, connecting the cities of Shanghai and Nanjing, and is part of the Beijing-Shanghai high-speed railroad. About 9 kilometers of the bridge is above water.

READ
The Shondong Cave is the largest cave in the world. Vietnam 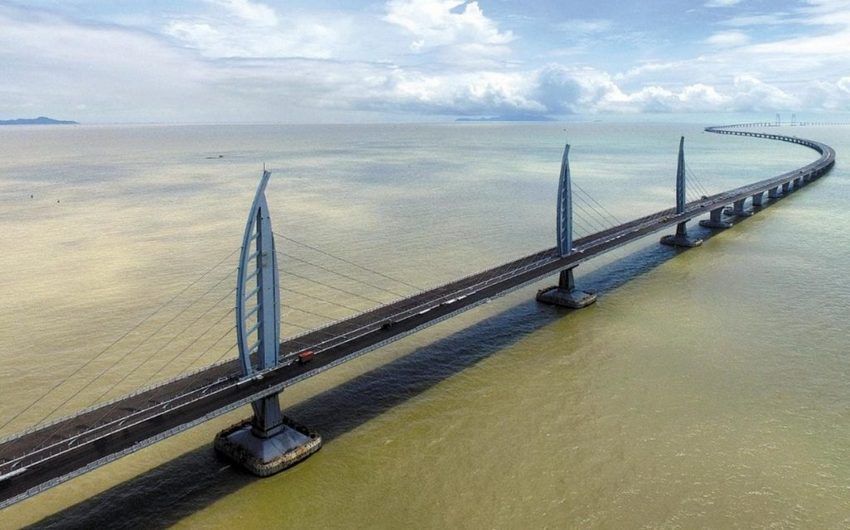 Another one of the world’s longest, but already the sea bridge connects major cities: Hong Kong, Zhuhai, Macau. The construction consists of a series of bridges – 38 km, underwater tunnels – about 7 km, trestles and artificial islands. The total length of the construction is 55 km, and the length of the main part of the bridge is about 30 km. Construction was completed in 2017 and took 8 years.

According to preliminary information in May 2018 the bridge should be put into operation. Before the construction of this object the first place among the sea bridges was also occupied by the Chinese bridge Qingdao across the bay. 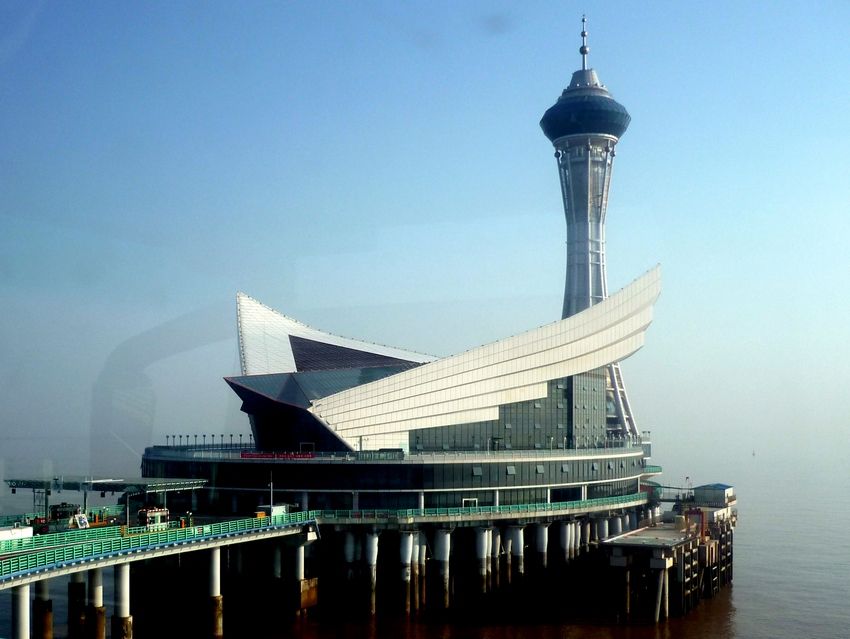 It is the longest transoceanic bridge in the world, connecting Shanghai and Ningbo. It is 36 km long, and halfway there is a platform island where drivers can stop and have a break or a snack right in the middle of the bay. Construction of the bridge lasted from 2003 to 2007. 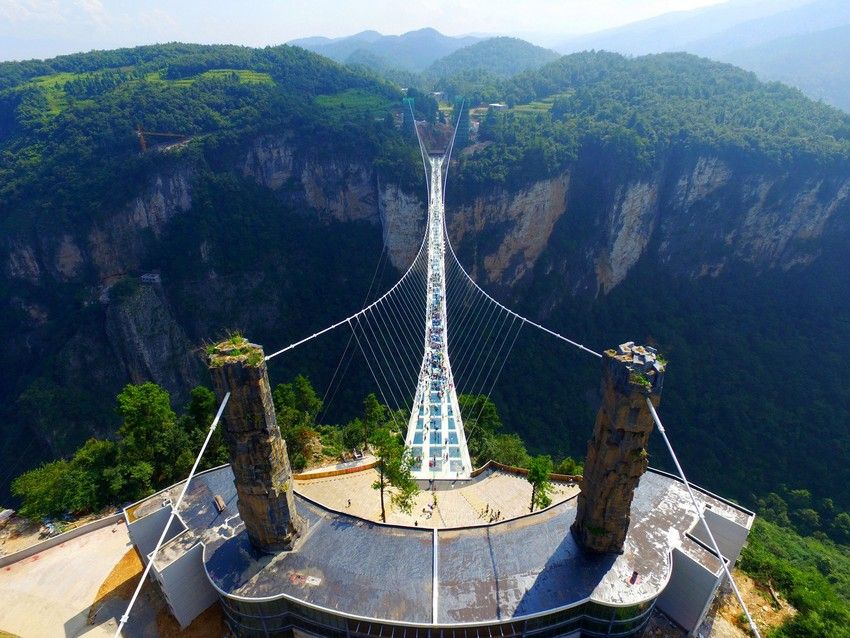 Another record-breaking pedestrian bridge in southern China’s Sichuan Province. He received the title – the world’s highest bridge of glass . Its length is 488 meters, and is located at an altitude of 1,880 meters above sea level (the distance from the bridge to the bottom of the gorge is 186 meters). 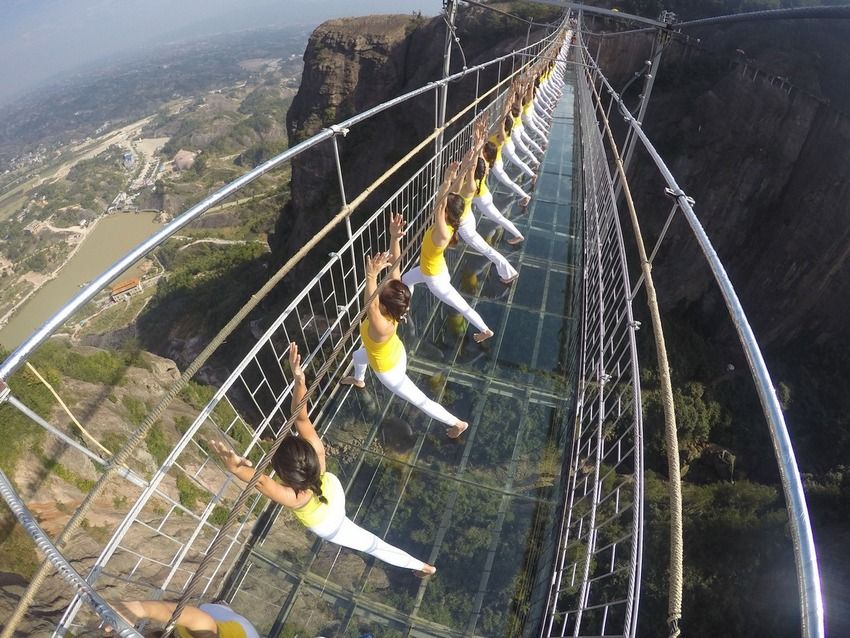 At any one time allowed on the bridge no more than 500 people, but the structure itself is designed for 2,000 visitors. Of course, such a walk is not for the faint of heart. In addition, the bridge has a special effect: it built plasma, which emit cracked glass underfoot. 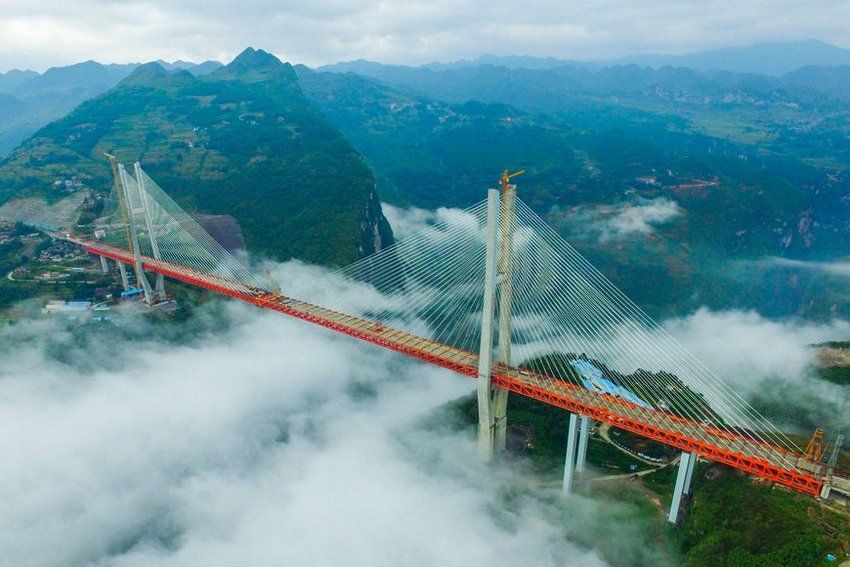 If we talk not about pedestrian bridges, but automobile bridges, the Chinese beat everyone here as well. In 2016, the highest suspension bridge in the world was completed, which connects the western and eastern banks of the Beipanjiang River. The Duge Bridge is 564 meters above the river and is more than 1,341 meters long. It took three years to build. 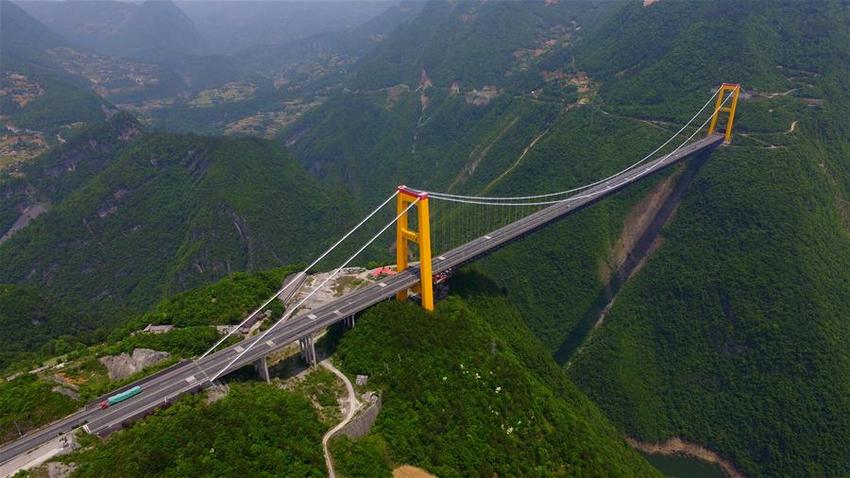 Another suspension bridge crosses the Siduhe River valley in Hubei Province. It was the one that ranked first among suspension bridges before Duge was built. But we couldn’t pass it up because of its laconic design, which looks so organic against the picturesque landscape. The total length of the bridge is 1,222 meters and the height above ground level is 496 meters. 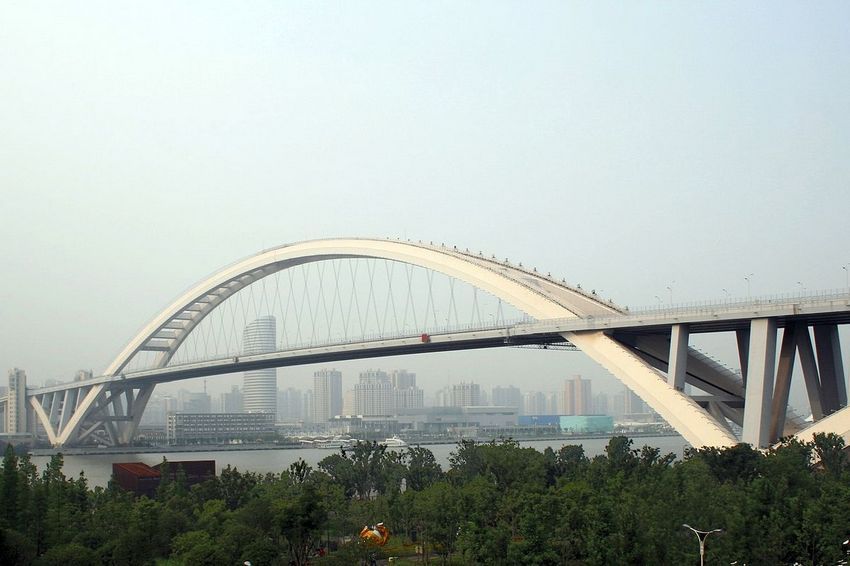 The second longest steel arch bridge in the world with a total length of about 4 km. It spans the Huangpu River and connects two districts of Shanghai. The Lupu Bridge has a modern design and looks especially spectacular at night when the lights are on. 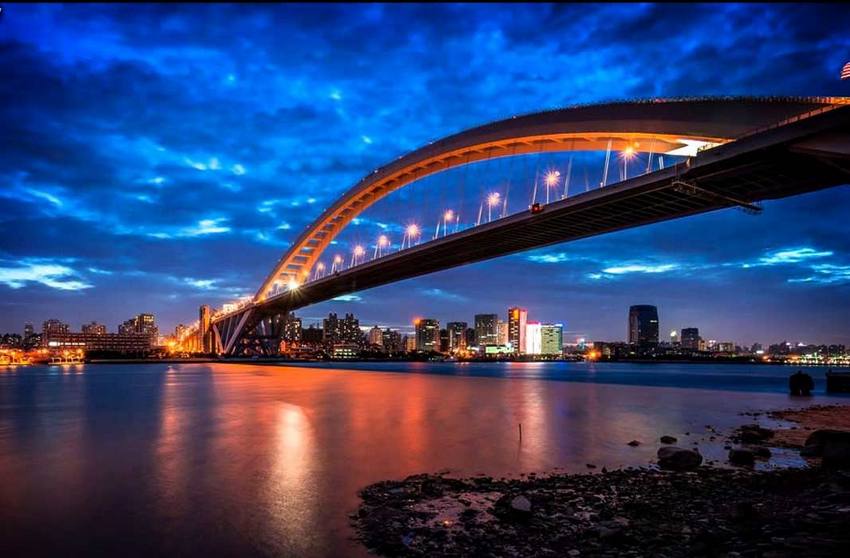 The project was selected through a competition organized by the city administration. The bridge was opened in 2003. 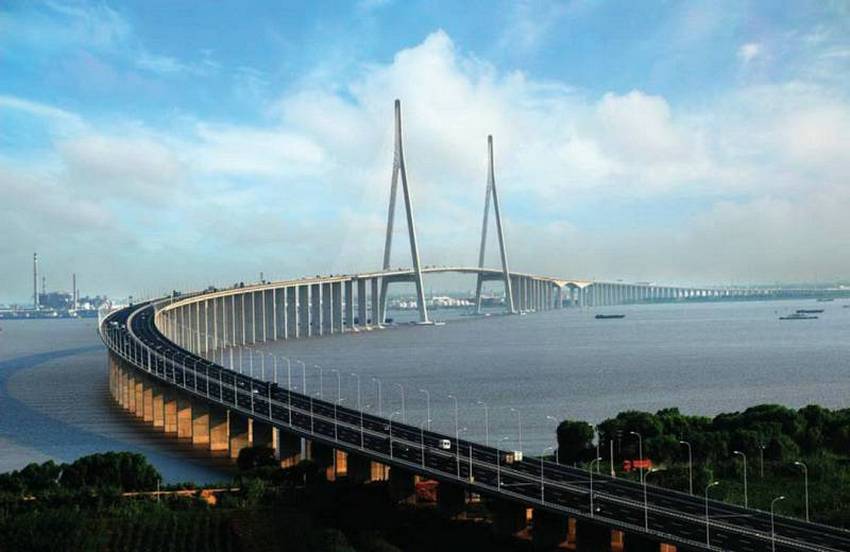 The bridge is located in Suzhou in Jiangsu province in eastern China. It spans the Yangtze River and is 8,206 meters long. The bridge was opened in 2008. It is not only an important facility as it shortens the route between the two counties, but also a striking landmark because of its futuristic design. 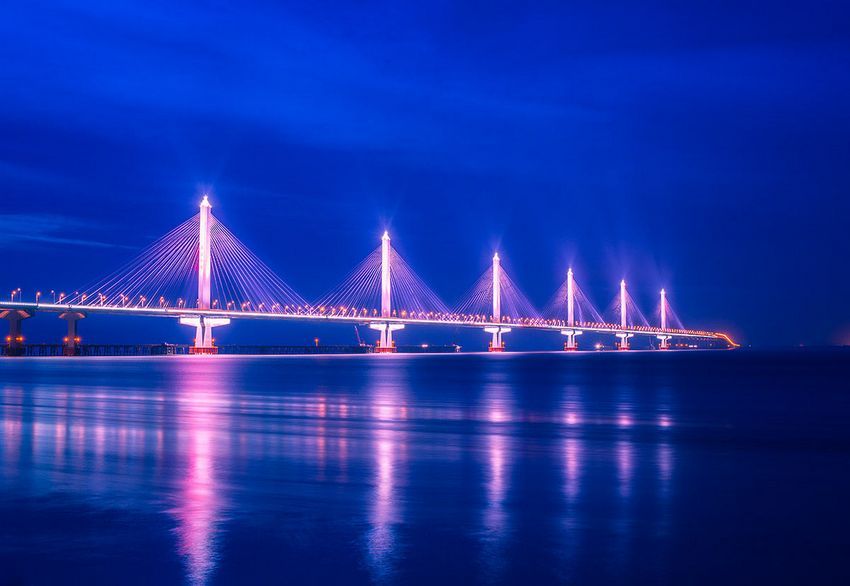 The longest and widest bridge among multi-pile cable-stayed bridges, crosses Hangzhouwan Bay and connects the cities of Jiaxing and Shaoxing. The total length of the bridge is 10,138 meters . It also looks very spectacular at night in the lights. Read more about travelling on our website.