On a lake in Denmark there is a miniature world map, which was created by a Dane half a century ago 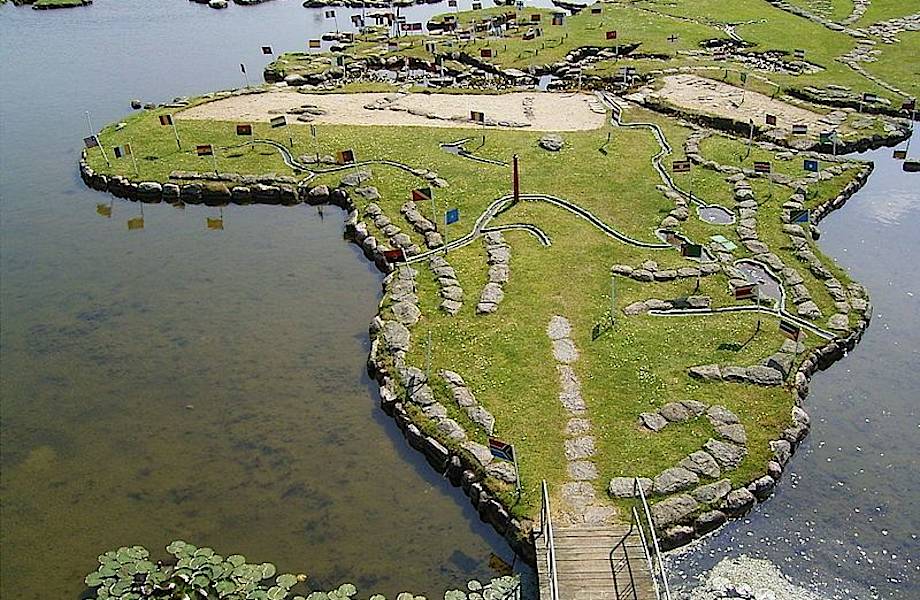 Biblical history says that the world was created in six days. Those who tend to believe science say otherwise: it took about four billion years to create the world. And the Danish farmer Soren Poulsen said nothing, but made his own world on his home lake. By the way, it took him a quarter of a century. 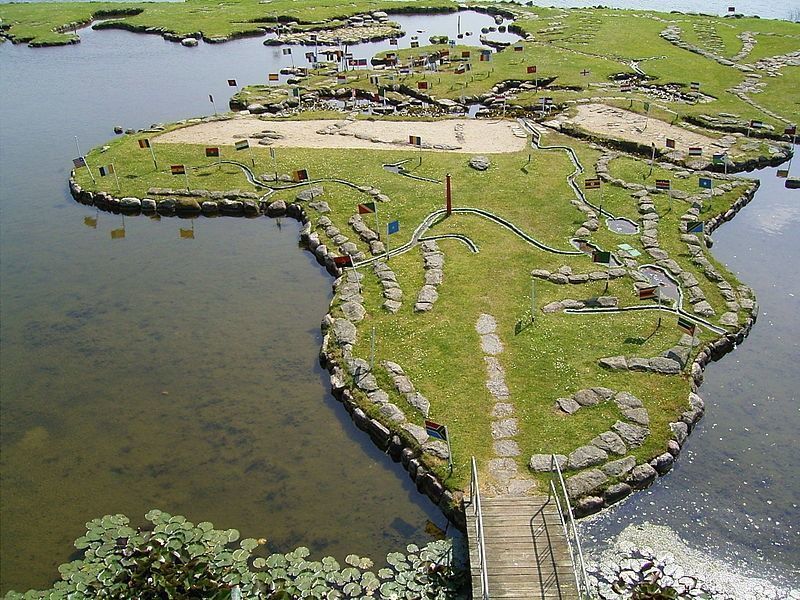 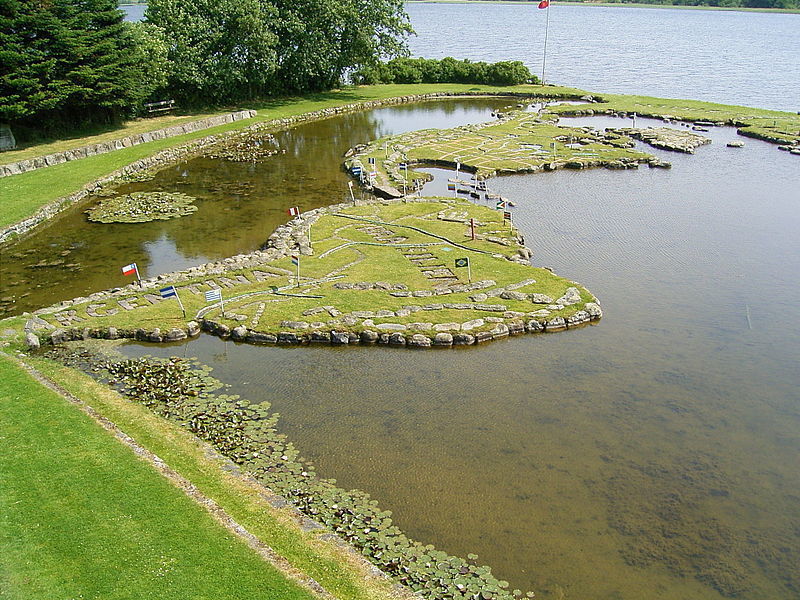 This is the most unusual attraction on Lake Kleitrup in Denmark. The world map is made of stones, some of which weigh about a ton. Every year, up to 40,000 people come to wander the countries and walk the footbridge from Africa to Europe. 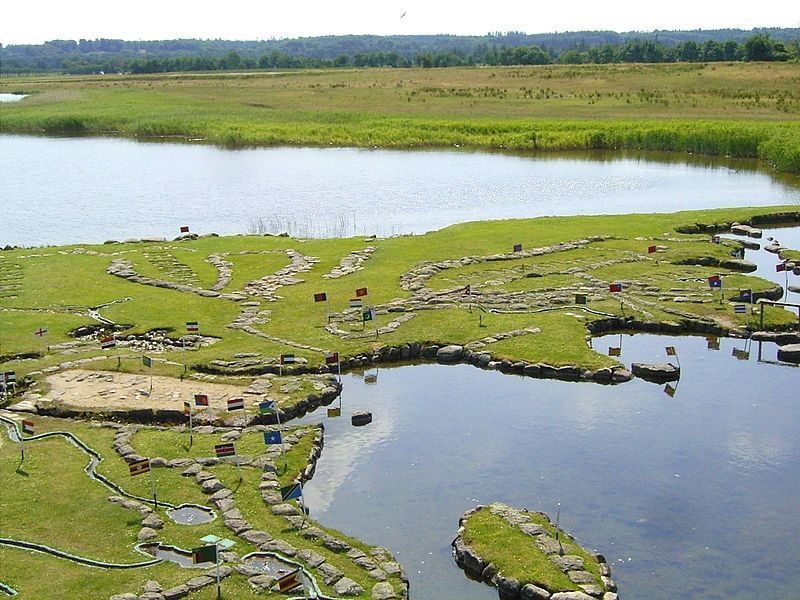 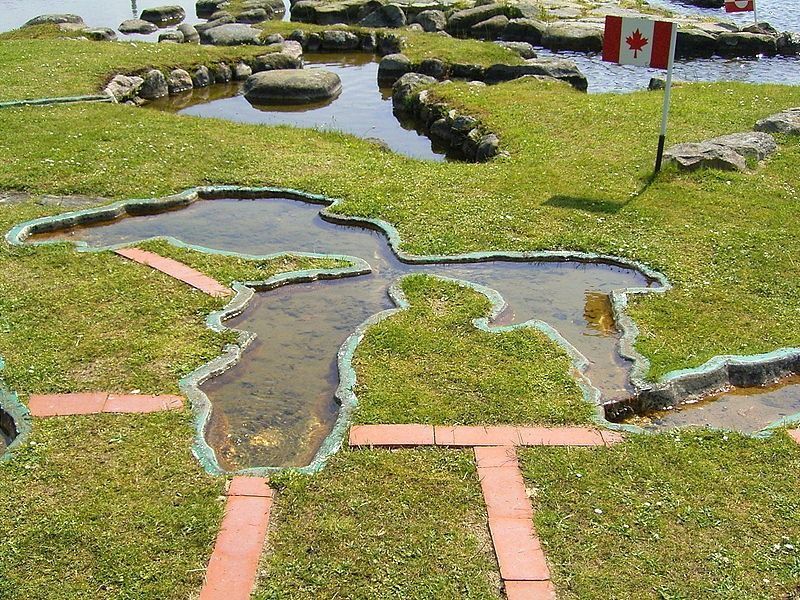 Poulsen was born in Denmark in 1888, but then emigrated with his family to the United States. He spent about twenty years in the States before returning to his native land. In 1943, while working in the fields, he found an unusually shaped rock that looked very much like Jutland, the peninsula that is now divided between Germany and Denmark. Apparently, it was difficult to find other activities in the Nazi-occupied country at the time, so Poulsen decided to create his own little world. 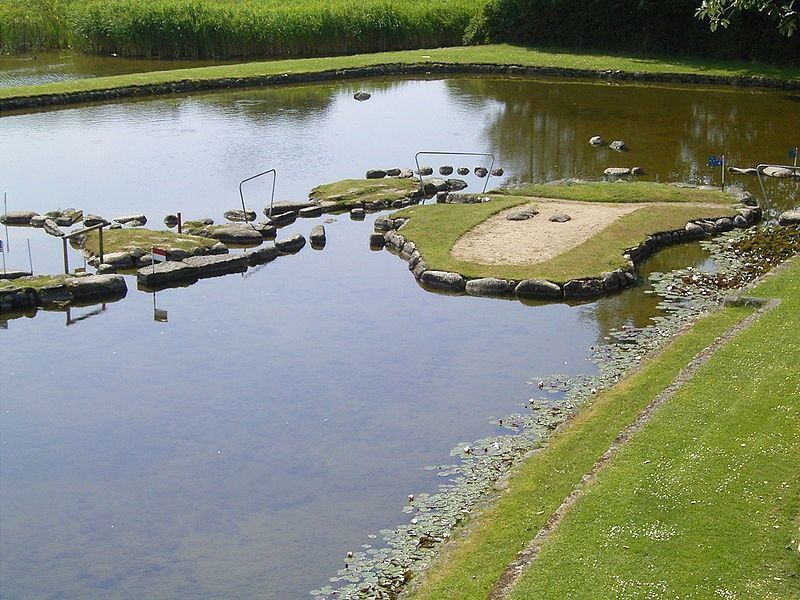 The war ended, but the inspiration did not disappear: the Dane worked on his creation until 1969. Each country was “created” by hand: he transported the stones on a small cart, stacked them on ice in winter, and when spring came, he pressed them to the bottom in shallow water. Gradually each country took on its own shape. Poulsen died at the age of 88 a few months after finishing his creation. 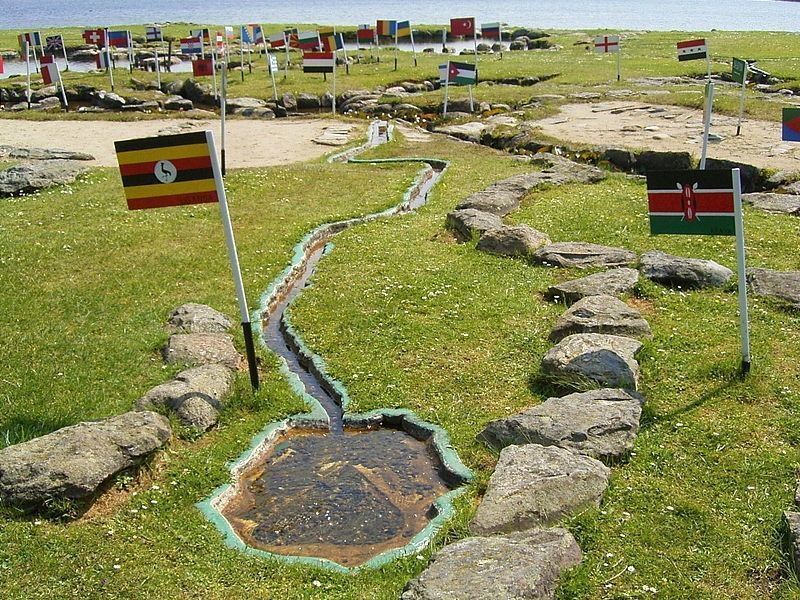 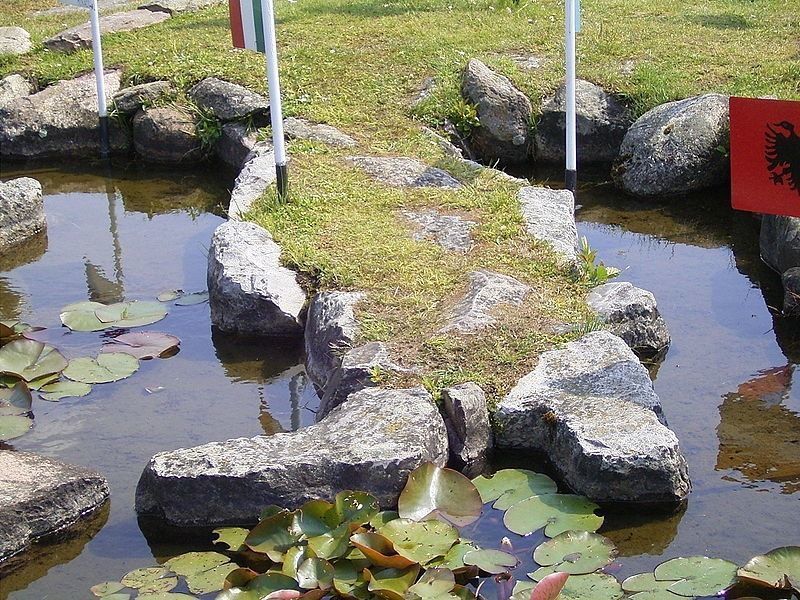 The result is a world that is small but so interesting. The most ideal place to travel around the world in half an hour, and the time saved can be spent on an ice cream parlor. The map covers an area of four thousand meters. Of course, the hardcore purists will find some inaccuracies (for example, there is no Antarctica here), in which case they had better go straight for the ice cream. Everyone else, however, will love the map. Each country has its own little flag, and they are updated every year. 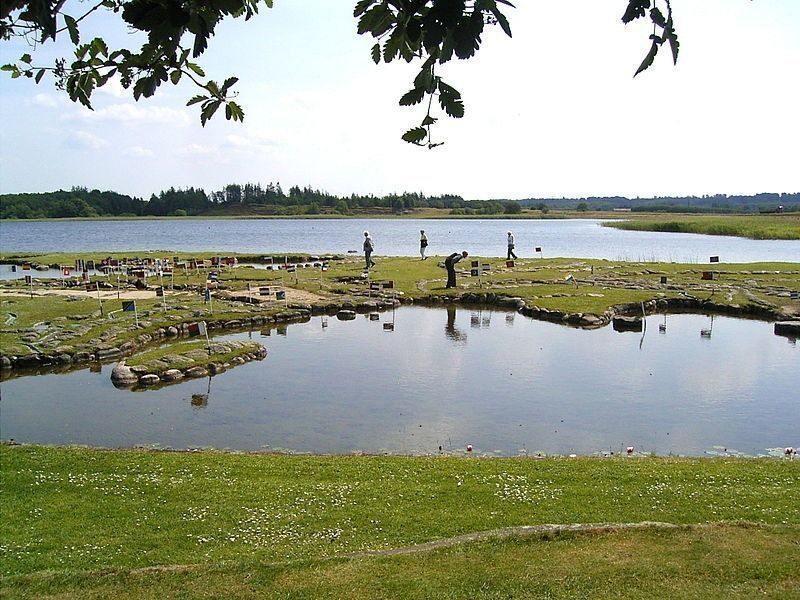 Today, the world map is guarded with awe. A park is laid out around it, where locals come for a picnic. Non-locals also come here, but mostly Danes. From time to time the map has to be corrected: it was especially hard work in the 1990s, when communism fell.

The most famous geoglyphs on the planet (42 photos)

Geoglyphs are called figural or geometric patterns on the ground, the length of which, as a rule, is more than 4 meters. Some geoglyphs can be so huge sizes, that they can be seen only from air, what we suggest to do right now: 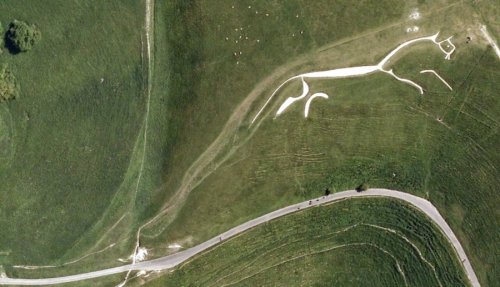 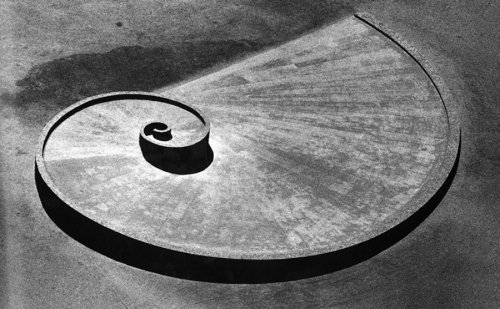 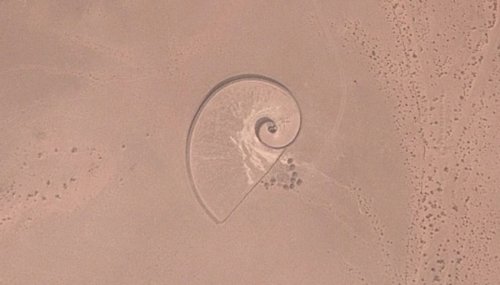 The inscription “Ni pena ni miedo,” which roughly translates to “neither shame nor fear,” was created on the sand of the Atacama Desert in Chile. It is the world’s largest poem authored by Chilean poet Raúl Zurita, who suffered at the hands of Augusto Pinochet’s military dictatorship in the 1970s and 1980s. The length of the inscription is 3.15 kilometers. 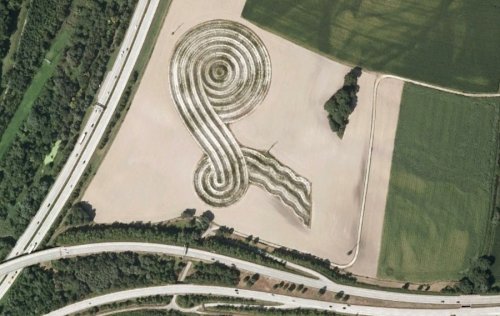 “Fauvant Signs,” near the village of Fauvant, Wiltshire (England). Created in 1916-17, the war signs were dedicated to soldiers participating in World War I.

The world’s largest portrait of Turkey’s first president, Mustafa Kemal Ataturk, is near Erzincan, Turkey. The image covers 7.5 km² and was created by 3,000 soldiers over a period of 2 months. 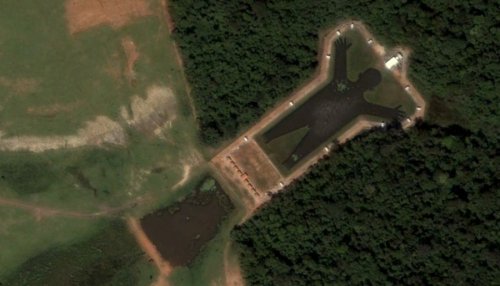 Lake, the shape of which repeats the silhouette of a man, Sao Paulo state, Brazil. 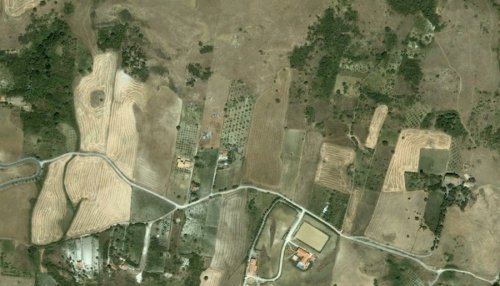 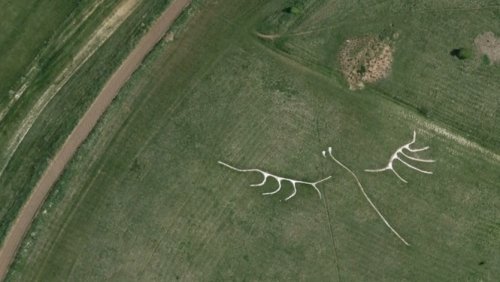 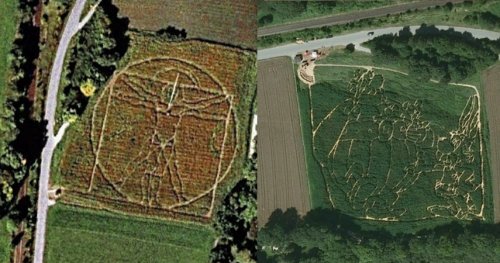 Geoglyphs of Nazca (Nazca lines), Nazca plateau in the southern part of Peru. Creation period presumably from 400 to 650 AD. 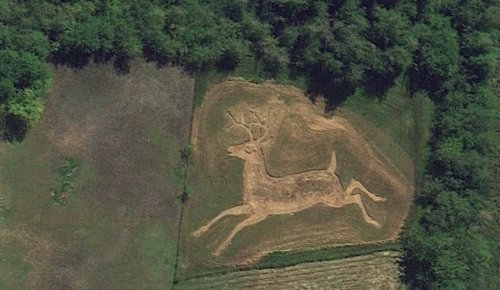 Portrait of Genghis Khan, created in 2006 during the traditional Mongolian festival Naadam. 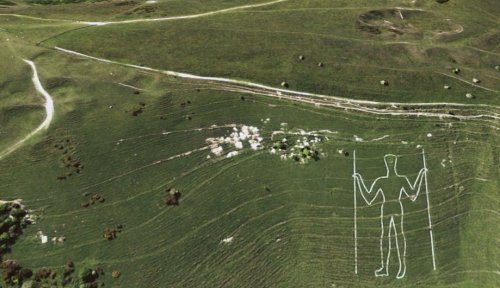 Wilmington Long Man, Wilmington, East Sussex, England. It is assumed that the geoglyph appeared in the Iron Age. Others attribute it to the 16th or 17th century.

The giant chessboard is near the town Bad Frankenhausen-Kiefheuser, Thuringia (Germany), 2009. Geoglif size is 400 by 400 meters. In 2009 there was a match between Elisabeth Pähtz, a member of the German women’s chess team, and the world chess community. 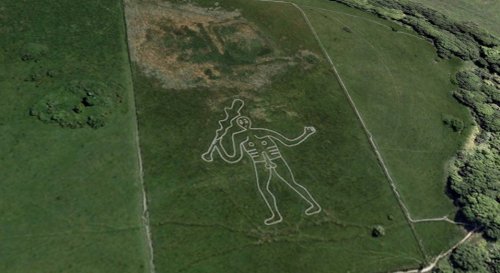 The naked “Giant of Sern Abbas” (or “Sern Giant” or “Rude Man”), near the village of Sern Abbas, county Dorset, England. The age of the geoglyph is still uncertain, but the first mentions of it date back to the mid-18th century.