The Abbey of San Galgano (Abbazia di San Galgano) and the sword of the knight. Italy.

San Galgano Abbey is a Cistercian abbey located 30 km from Siena in the wide fields and cypress trees. The once rich monastic complex included a hermitage and a large abbey, but now the monastery stands half-destroyed. Lonely and defenseless are the brick walls, unroofed.

Galgano Guidotti was born in 1148 in Cusdino, a small village not far from the abbey. Galgano spent his youth in wars and campaigns, his promiscuous lifestyle and lasciviousness were his choices. But over time, he realized the uselessness of such a life, felt an emptiness inside and a desire to change. So Galgano decided to spend the rest of his life as a hermit, in penitence and prayer. He returned to his native land and, as a sign of complete renunciation of violence and cruelty, he stuck his sword in a rock and began to pray to the crucifix formed from the hilt.

On December 3, 1181, Galgano died. And in 1185 he was canonized. Later, a small round church was erected on the spot where the sword protruded from the stones. The Cistercians, with whom the last years of Galgano’s life were associated, decided to found a monastery complex on this site, the construction of which began in 1218. The work was completed by 1288. The Abbey of Saint Galgano became the most powerful Cistercian monastery in Tuscany. It was graced by various emperors – Henry VI, Otto IV, Frederick II. Pope Innocent III exempted the abbey from paying tithes. The abbey’s countless riches gave it economic and cultural importance in the Republic of Siena. So in 1257 the monk Ugo became treasurer, i.e. he was fully responsible for the treasury of the Republic. This was not the only time that the monks of the Abbey of St Galgano were entrusted with such high missions. But the monks were not only responsible for the financial part, they were entrusted with the study of the aqueduct to provide Siena with water and the monks were the first builders of the Cathedral of Siena.

In the fourteenth century the crisis spread throughout Tuscany and the situation worsened at the abbey. The year 1328 brought a shortage of money, in 1348 an epidemic of plague swept through. Bandit raids became more frequent. The decline continued into the 15th century. In 1474, the monks erected the Palace of St. Galgano in Siena to move into it, leaving the abbey. Meanwhile, the land ownership of the monastery had long been the subject of disputes between the Republic of Siena and the papacy. The abbey was falling into disrepair, and in 1503 the lead roof of the church was sold, which drew the line under it. In 1576, only one monk remained within the walls of the monastery. Everything around was in ruins and desolation.

The ancient walls continued to crumble in subsequent centuries, in the XVIII century, lightning hit the bell tower and damaged it. Restoration work began only in the early 19th century.

Now the abbey, which still remains roofless, giving it a mystical image, is open to the public. It also hosts concerts and various cultural events.

The Church of the Rotunda is higher on the hill. The round, simple structure looks like a mausoleum. In the center of the first hall is the sword of St. Galgano, covered by a dome to protect it from vandals. Several years ago there were attempts to pull the sword from the rock, they were unsuccessful, but the relic was damaged. The walls of the church are covered with ancient frescoes.

The expressive ruins of San Galgano Abbey have been the setting for the filming of Tarkovsky’s Nostalgia and Anthony Minghella’s The English Patient.

http://www.sangalgano.org/ Drive to Monticiano. There will be signs to the abbey from there.

Free Thermas of Tuscany Tuscany, a sulfur-rich land of ancient volcanoes such as Monte Amiata, abounds with thermal springs that revitalize both body and spirit. From the wave-spreading Siena clay hills of Maremma and beyond, there are numerous places where you can spend your vacation not just resting and relaxing, but also enjoying direct contact with nature.

10 trips to Italian romantic movie locations. Italians not only know how to talk beautifully about love, but also to make cute and romantic movies where the main characters find the most heartfelt words and their views do not lie. Not the least of these is the location, .

San Galgano Abbey and the Sword in the Stone

Chances are you haven’t heard of Galgano Guiotti, but you know about King Arthur’s legendary sword. The same sword that was in stone and was ceremoniously extracted by Arthur to prove his right to the royal throne. So what do they have in common?

The legendary story of King Arthur and his sword Excalibur is known to almost everyone. But this literary fiction of the English became a reality for the people of Italy. To see for yourself, go to the Tuscan abbey in the town of Montesipi. There you will see a sword that actually exists and stuck in the very real stone. All you can see of it is the hilt and a few centimeters of the blade. It is usually called the Sword of Galgano. 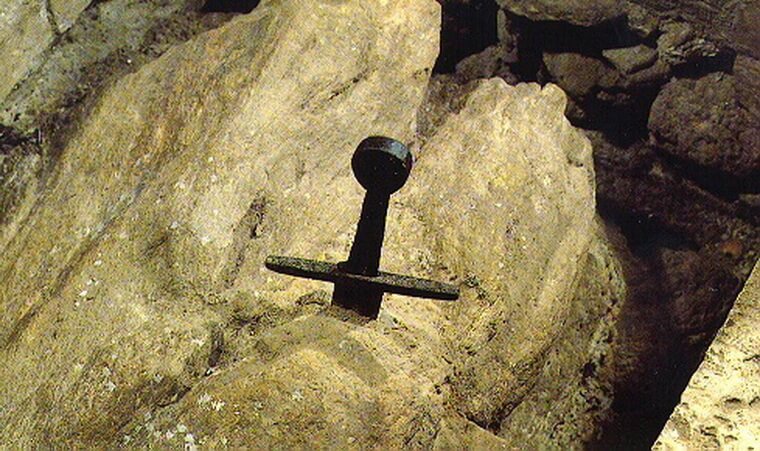 The sword is in the chapel of San Galgano Montesipi, 300 meters north of the ruins of the abbey of the same name, in central Italy in the region of Tuscany. The nearest major city of Siena is located 30 km northeast. 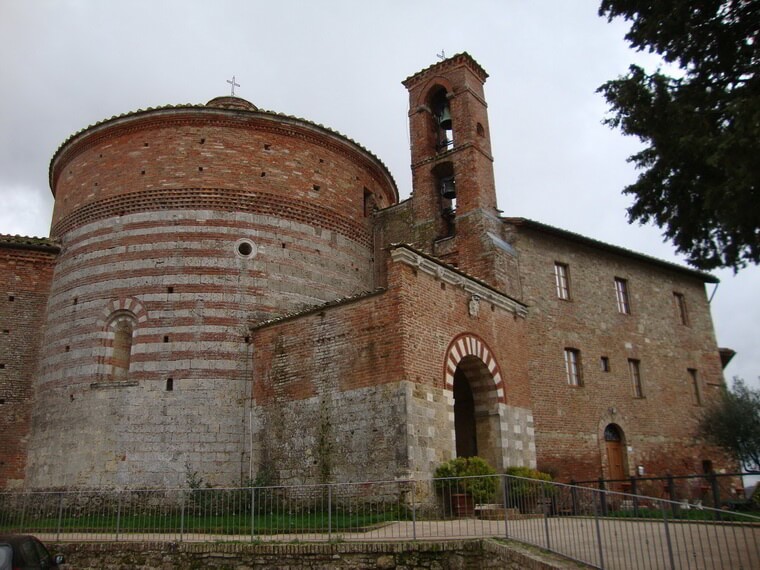 Legends of the sword of Galgano

This sword is believed to have been thrust into the stone by a Tuscan nobleman named Galgano Guiotti in the 12th century. But why did he do it? The answer to this question lies in two legends.

Galgano was born in 1148 in the provincial town of Ciusdino. He was said to have led a rather dissolute life in his youth. Although he was knighted and trained hard in the art of war, he was considered an arrogant and impudent thug. In general, he was a disgusting citizen.

One day Galgano had a vision. The Archangel Michael appeared to him and showed him the way to salvation. As if mesmerized, Galgano followed him to the hill of Montesipi. There he met the twelve apostles and the Creator himself.

After the vision, Galgano’s horse refused to obey his commands and stubbornly led him up the hill. It turned out to be the very hill he had imagined. Galgano understood that it was a Sign, and he resolved to put an end to his wicked past. And then another vision occurred. A voice from heaven told him to renounce all material possessions. But Guiotti said it was as unrealistic as piercing a rock with a sword. To prove it, he took the sword and tried to thrust it into the rock. Surprisingly, the blade entered the rock like butter and froze in it.

Then Galgano finally realized his future. He began to live on the hill as a humble hermit. He practically never left his abode and lived in poverty, accompanied by wild animals. Only rarely did he go out to the people and meet with the monks.

The hermit died in 1181. A few years later he was canonized as a saint. He is often called Saint Galgano (San Galgano). The abbey also bears his name.

According to another version, Galgano, after visions, wanted to put a cross on top of the hill. But there were no woods around. He decided to stick his sword in the ground instead of the wooden cross. It is said that the ground, into which the blade entered, immediately became petrified so that no one could pull it out. If you look more closely, you can see that the sword looks a lot like a cross. 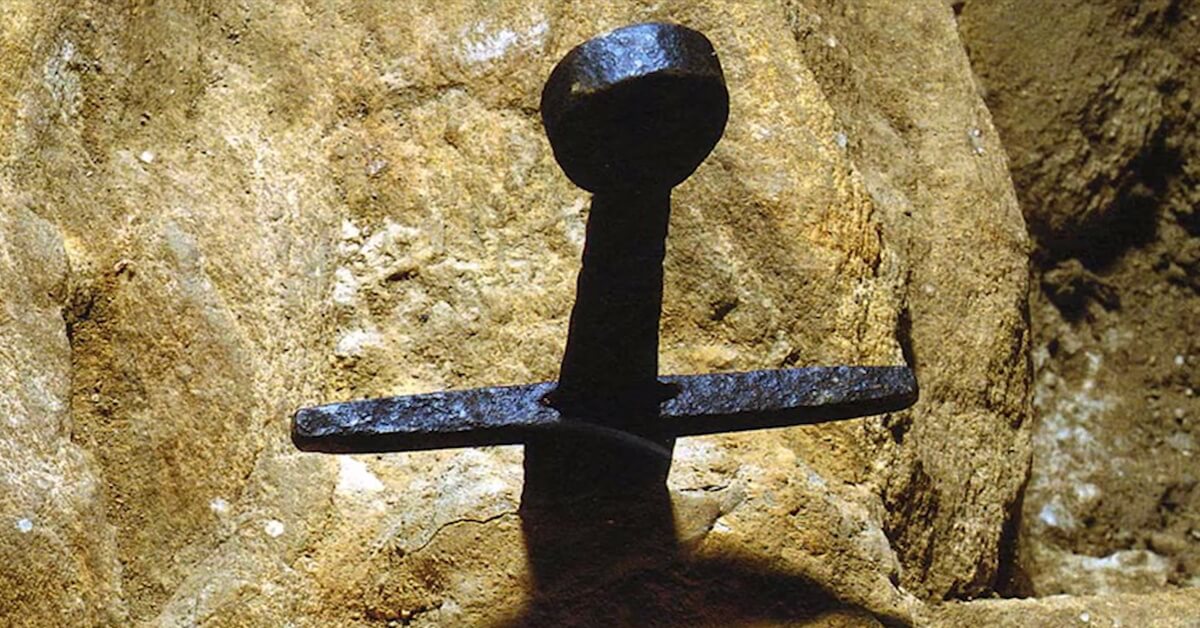 The sword in the stone. San Galgano Abbey

Research on the sword

For several centuries, the sword was considered a fake. It did not arouse the reverent attention of scholars. But after examining the structure of the metal, scholars claimed it was characteristic of the era.

Modern radar analysis has established that there is a cavity in the stone under the sword, measuring approximately 1 by 2 meters. It is thought to be a crypt in which the body of Saint Galgano may have rested. 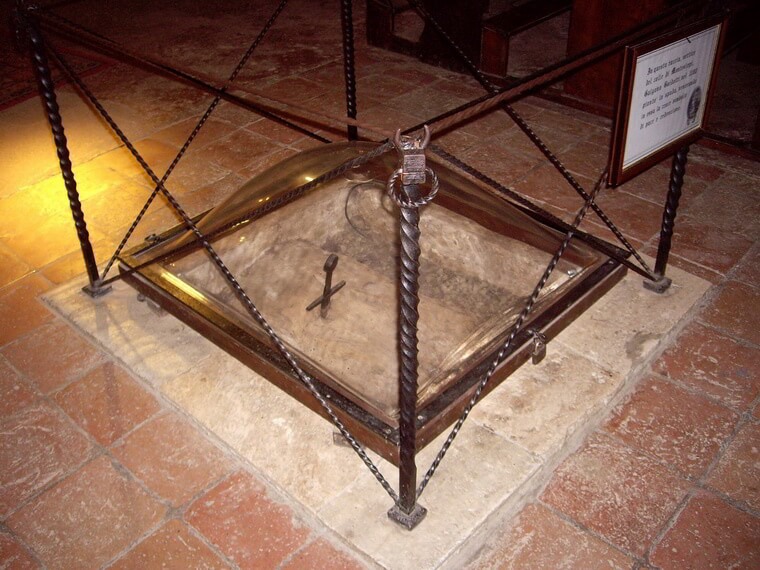 The Sword of Galgano is under a protective cover

It is believed that the legend of St. Galgano was the source of the medieval legends of King Arthur and the sword Excalibur.

It is noteworthy that the first story of Arthur pulling a sword out of a stone (and exactly pulling, not thrusting) appears a few decades after the canonization of Galgano. In particular, the sword in stone is mentioned in a work by the Burgundian poet Robert de Boron.

The abbey was built around the site of the former hermitage of Galgano. Construction began around 1220, but was not completed until 60 years later. 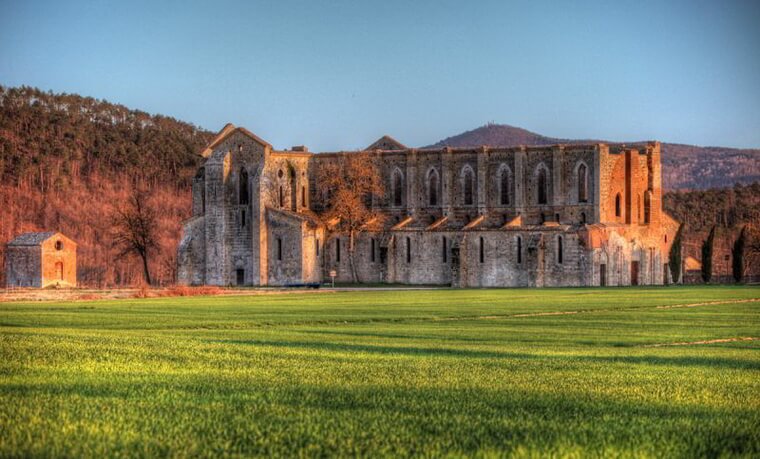 During the internecine strife of the 14th century, the monastery began to be ravaged. By the end of the 14th century, only one abbot remained. The impoverished abbey survived for about 4 centuries until, in 1786, the roof, along with the bell tower, collapsed. The ruins were stolen for building materials.

In general, the plundering of the ruins for building materials was observed even at the time of oblivion of the legendary Colosseum, which also gradually was stolen for the construction of other buildings.

In the 19th and 20th centuries there were attempts to rebuild the monastery, but it still lies in ruins.

Not quite in ruins, but without a roof The Abbey of San Galgano. View from above

The chapel of San Galgano was rebuilt in 1924 and retains its medieval form. It is here that the sword of Galgano is located.

Galgano Abbey as a tourist attraction

The abbey is open every day according to the following schedule

Adjustments may be made for tourists during weddings or other events. 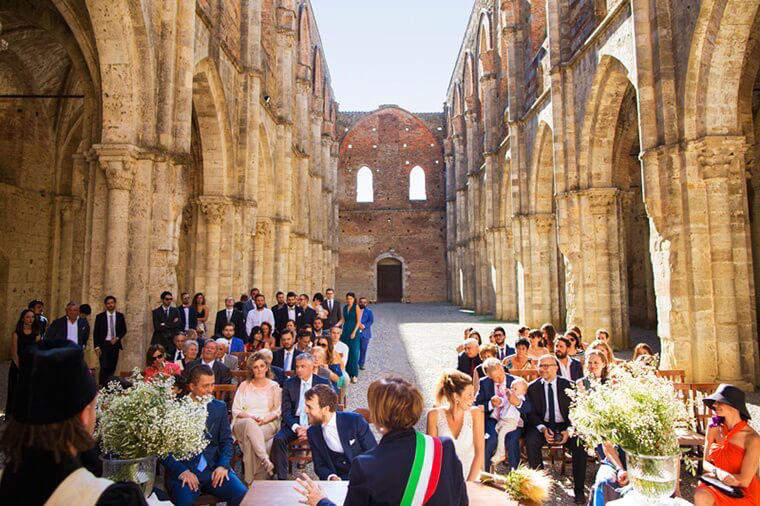 Weddings in the Abbey of San Galgano