Adam’s Bridge – the land link between India and Sri Lanka

An interesting geological feature known as Adam’s Bridge (or Adam’s Bridge) can be seen in the Palk Strait that separates Sri Lanka from mainland India.

Adam’s Bridge is a chain of islets and shoals, which from space looks like the remains of an ancient crossing between Ceylon (as the island of Sri Lanka was called until 1972) and the southern part of the Indian subcontinent.

Where is Adam’s Bridge

The bridge “connects” (if I may say so) the southern part of India with the northwestern part of Sri Lanka across the Palk Strait.

The distance between India and Sri Lanka is about 100 kilometers. On the mainland side, Adam’s Bridge starts from Pamban Island. It is an almost 30 km long stretch of land. On the side of Sri Lanka the starting point of the bridge is the island of Mannar. It also stretches for approximately 30 km.

But it is more correct to consider Adam’s Bridge as the distance between these islands. By the way, also about 30 kilometers. 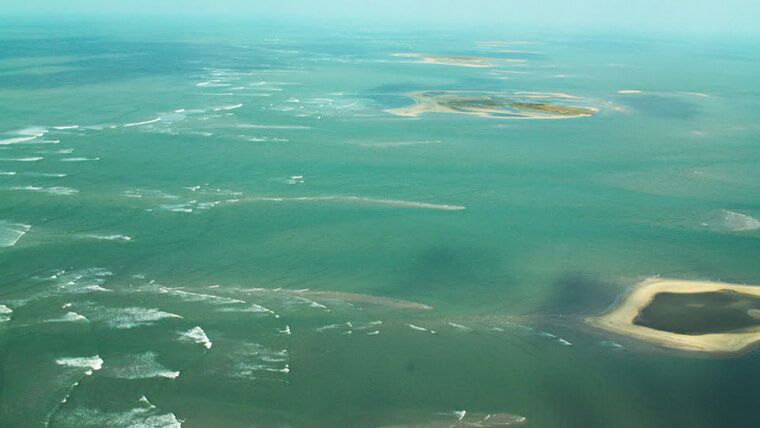 From space it is clear that this narrow isthmus in ancient times really connected Sri Lanka to the continent. In confirmation of this, records from local temples tell us that until the 15th century it was possible to get from India to Sri Lanka by land. However, in 1480, during the most powerful storms and cyclones, the overland trail was destroyed. Even 15th century shipping charts show Adam’s Bridge as land. 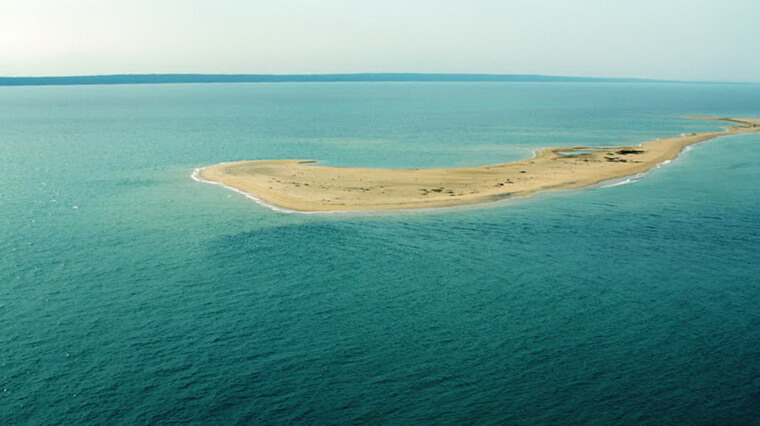 One of the islands of Adam’s Bridge

Adam’s Bridge currently has 103 shoals. Although you could argue with that, because during periodic sea level rises, many of the islands end up under a meter layer of water. The methods for counting the islands are also very rough. Using Google Maps satellite maps, we counted about 20 large islands in addition to Pamban and Mannar.

READ
Sentinel Island and the Aborigines of the Stone Age. India. Description. 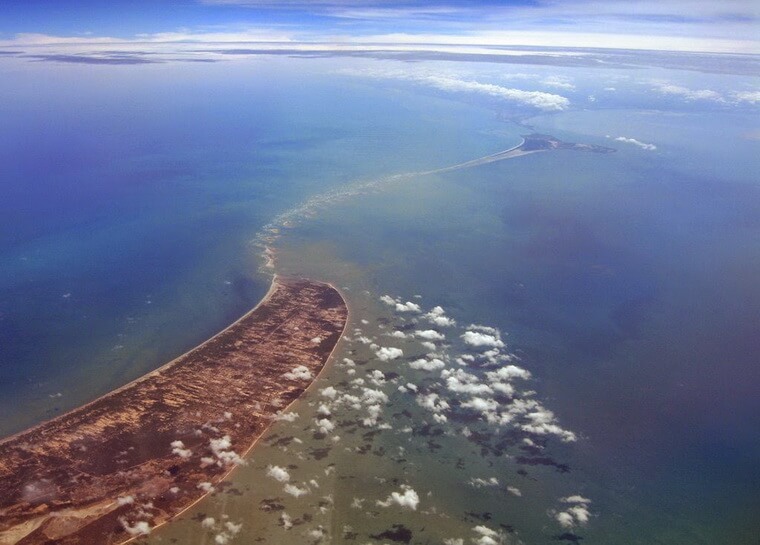 Adam’s Bridge from the Sri Lankan side

The sea in this area is quite shallow, about 1-10 meters. The presence of shoals makes it very difficult to navigate here. Only the small strait of Pamban between the island of the same name and India can be used for the passage of small ships.

Geologists in the 19th century put forward two basic theories of the formation of Adam’s Bridge.

The first suggests that it arose in the process of accretion and uplift of the land in this area.

The second believes that the isthmus was the result of the separation of Sri Lanka from mainland India. The fragile limestone ridges later evolved into large rectangular blocks, which gave rise to the belief that it was a man-made structure.

The bridge is first mentioned in the ancient Indian Sanskrit epic Ramayana. There it is called RamaSetu, which means Rama’s Bridge.

The sea separating India and Sri Lanka is called Sethusamudram, which translates to “The Sea of the Bridge.

Europeans first heard about it in the middle of the 9th century from the “Book of Roads and Kingdoms” by the Persian geographer Ibn Khordadbe. The very first mention of this place exactly as Adam’s Bridge dates back to 1804. Some sources link the bridge to a famous mountain in Sri Lanka – the famous Adam’s Peak. According to legend, Adam, who was expelled from Paradise, went down on the mountain and walked overland from Sri Lanka to India on his way to Eve. Accordingly, the passage was also named after him.

Another legend of Adam’s Bridge

The Brahmans (the Hindu priestly caste) call it the Bridge of Rama. From the epic “Ramayana” it appears that the construction of the bridge was carried out under the direction of Emperor Rama. And, in addition to humans, monkeys from the so-called Vanara Army were also involved. The bridge was built so that the Emperor’s troops could move to Sri Lanka for the decisive battle with Ravana, the evil king of Rakshasa, who had kidnapped Rama’s beloved, Sita. The bridge is called Setubandhanam in the epic, and this name is still in use today. 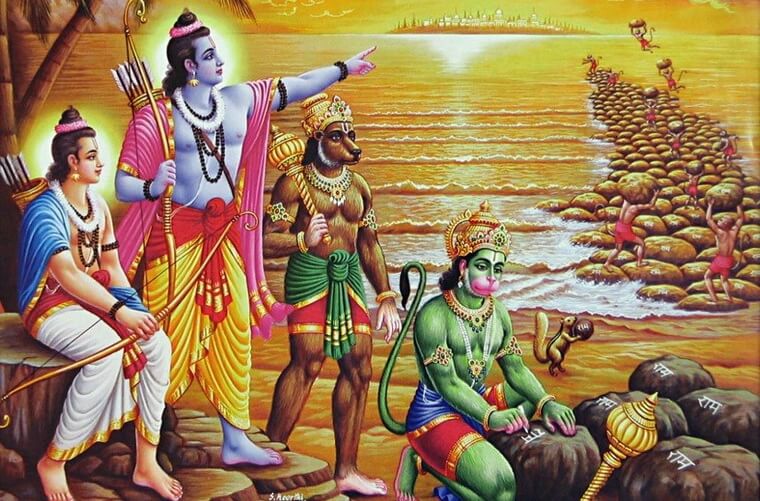 The present condition and problems of Adam’s Bridge

Large seagoing vessels coming from the west circle Sri Lanka to reach the eastern shores of India. It is more than 800 kilometers of travel and about 30 hours of time.

The Indian authorities have developed a project to deepen the section of the Straits near the Adam’s Bridge. But a lot of people and organizations are against such construction. The main emphasis is on the fact that Adam’s Bridge is described in the Ramayana and is of great religious significance. In addition, there are concerns about the impact of dredging on the ecology and the marine ecosystem of the area. The opposition claims that no proper scientific studies have been conducted for this project. Therefore, for now, the project remains unrealized.

There are two-hour boat rides for tourists that depart from the coastal town of Talaimanar on the Sri Lankan side. Notably, Sri Lankan Navy vessels are used for the walks. Usually 8 tourists and 2 accompanying crew members are placed on board. The cruises take place from 7:00 a.m. to 4:00 p.m.

Earlier it was possible to get from India to Sri Lanka by train.

By train from India to Sri Lanka

Parallel to the islands of Adam’s Bridge was a ferry railroad crossing. It connected the towns of Dhanushkodi in India with Talaymanar in Sri Lanka. During the British colonization of the region, this crossing was part of the Indo-Ceylon Railway. It was possible to buy a rail ticket from Chennai, India, to Colombo, Sri Lanka.

The journey was by rail from Chennai to Pamban Island, then by ferry to Talaimanar, and then again by rail to Colombo. But in 1964 a cyclone completely destroyed Dhanushkodi and the rail ferry ceased to exist.

The video says that the railroad still exists parallel to the bridge, but you can’t see it from the satellite, so we’ll take the liberty of doubting that. Everything else is well worth your attention. 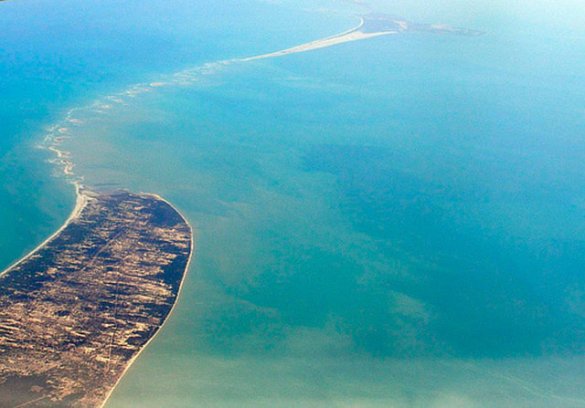 Adam’s Bridge is a bridge between India and Sri Lanka that existed several centuries ago. It is also called the Bridge of Rama. The Indian Sanskrit epic Ramayana Valmiki tells of the Setubandhanam Bridge, a bridge across the ocean connecting India and Sri Lanka. The epic attributes the construction of the bridge to Rama’s army of monkeys, who assisted him in his war against Ravana to win back his wife Sita. If the legendary epic is to be believed, there was a bridge between Sri Lanka not too long ago, connecting Ramswaram Island off the southeast coast of Tamil Nadu, India, and Mannar Island off the northwest coast of Sri Lanka. Geological evidence suggests that this bridge is a former land link between India and Sri Lanka, made of a chain of limestone shoals surrounded by a shallow sea 1 to 10 meters deep. The temple records of Rameshwaram suggest that the Rama Bridge was completely above sea level until it was destroyed by a cyclone in 1480 AD. The bridge and the surrounding sea were first mentioned in the Western Worlds in Ibn Khordadba’s “historical works of the ninth century” in his “Book of Roads and Kingdoms,” written in 850 A.D. The earliest map, which was prepared by a British cartographer in 1804 in reference to the Abrahamic myth, identified the bridge as Adam’s Bridge. It was believed that Adam used the bridge to reach the mountain, which the British identified as Adam’s Peak, where he stood on one foot for 1,000 years.

READ
Praya Nakhon Cave in Thailand. Description, photos, how to get there 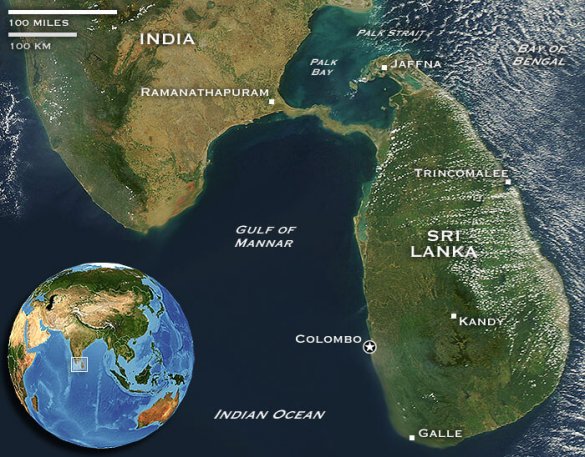 There are still many different versions about the nature and origin of this structure even today. In the nineteenth century, there were two common theories that explained the formation of the structure. According to the first theory, it was thought to have formed during the accretion and growth of the earth. At the same time, the other theory suggested that the bridge was formed by the detachment of Sri Lanka from the Indian mainland. Studies have also variously described the bridge as a chain of coral reefs, ridges formed in the region due to thinning of the earth’s crust, and a sandbar or series of barrier islands. The age of the bridge was also not precisely known. Various scientists speculate that it is between 125,000 and 3,500 years old, which, by the way, is the time of the Ramayana. A team from the Center for Remote Sensing (CRS) at Bharatidasan University, led by Professor S.M. Ramasamy, argued in 2003 that Adam’s Bridge between Sri Lanka and India is 3500 years old, and “since the carbon dating of the beaches roughly matches the Ramayana dates, its relationship to the epic must be studied.” It should be noted, however, that the 3,500 year age data for the bridge is based on studies done on the corals that are part of the bridge. That is, in fact, the bridge under the corals could have been formed hundreds of thousands of years earlier. 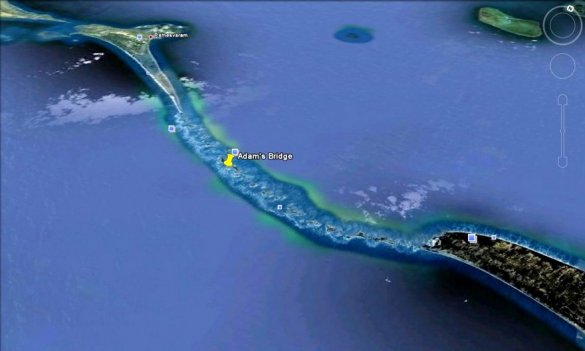 The former director of the Geological Survey of India, S. Badrinarayana, argues that such a natural formation would have been impossible. He justifies his version by the presence of a loose layer of sand under the corals. Badrinarayana believes that since corals usually form over rocks, not over layers of sand. Therefore, he believes that it is indeed possible to link this bridge with the Legend of Rama and the Hindu belief that the bridge was created by Sri Rama and Sri Lakshman with the assistance of Hanuman and the army of monkeys. Hindus consider Adam’s bridge sacred and refuse the Indian government’s offer to dredge the bridge to create a navigable canal known as the Setusamudram. In 2001, the Indian government approved the multimillion-dollar Sethusamudram shipping channel project, which aims to create a shipping channel across the Strait of Palca by dredging the shallow ocean floor near Dhanushkodi. The canal is expected to shorten by about 400 km the path for ships that have to sail around the island of Sri Lanka. By the way, the version of many Lankans about the bridge between Sri Lanka and India is also interesting. This version of the construction of Adam’s Bridge is the exact opposite of the Hindu version from India. Many Sri Lankans believe that the bridge was the construction of Ravana himself, using floating, weightless coral stones. Lankans believe that the bridge was a folding structure made by Ravana to cross the sea and reach India, if necessary.