Addu Atoll – the southernmost islands in the Maldives

As you remember, an atoll is not just one island in the vast ocean. It is a whole scattering of different sized islets. The Maldives is famous for its fabulous atolls, one of which is Addu Atoll. Even in our language, one of the richest and most beautiful on the planet, there are not enough epithets to describe all the charm and attractiveness of this atoll. 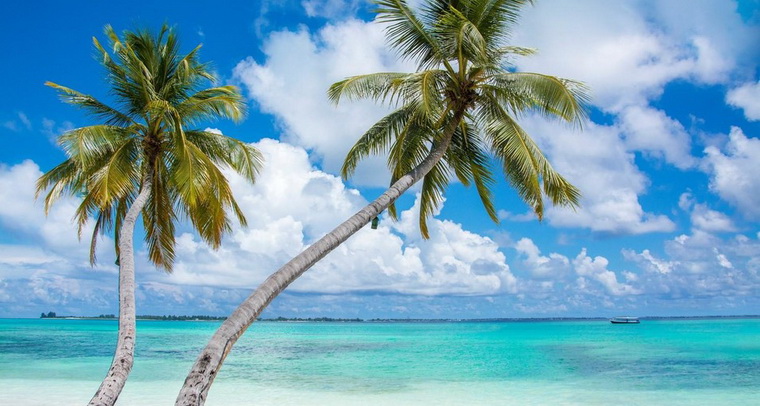 As we have mentioned somewhere on this site, the vast majority of tropical islands have such nature and such beauty, that, as they say, nothing can be described in a fairy tale. Ideally you should visit them all. And although to visit all the paradise islands is unlikely to succeed, we must strive for it. Here’s your choice: Ari Atoll in the Maldives, the island of Bali in Indonesia or Fiji in the Pacific. Or any other island closer to the equator.

Addu Atoll is a classic piece of paradise on the planet, consisting of 23 islands scattered across the Indian Ocean in the form of a giant horseshoe. The size of the atoll – from north to south is about 14.5 km, from east to west – all 18 km. In the center of the atoll there is a large turquoise lagoon.

Addu Atoll is the southernmost in the placer of the Maldives. It lies almost on the equator, or rather “a couple of meters” south.

Addu Atoll on the map 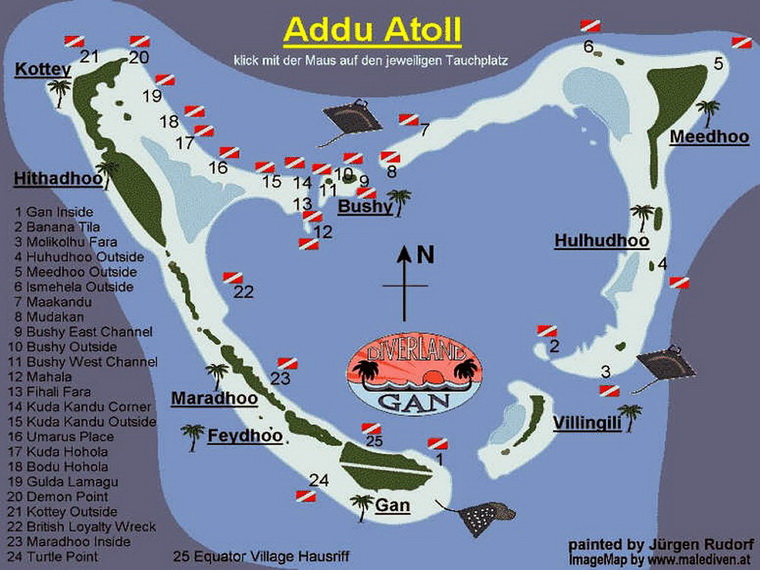 Sometimes the atoll has been called Seena or Sina, but the name Addu has stuck. We could not find any reliable information about the origin of the names. If you have such valuable data, please share it with us.

During World War II, Addu Atoll was home to a British air and naval base. They left behind a fairly well-developed infrastructure and an airfield, which later became the International Airport on the island of Gan. In addition, the British military connected several islands in the western part of the atoll with embankment dams.

Now you can ride around these islands, for example, on a bicycle rental (absolutely free) or on a moped, but for a small fee. Due to the fact that the islands have long been British, the locals speak English well until now.

Addu Atoll is surrounded by a beautiful lagoon with a rich underwater world. 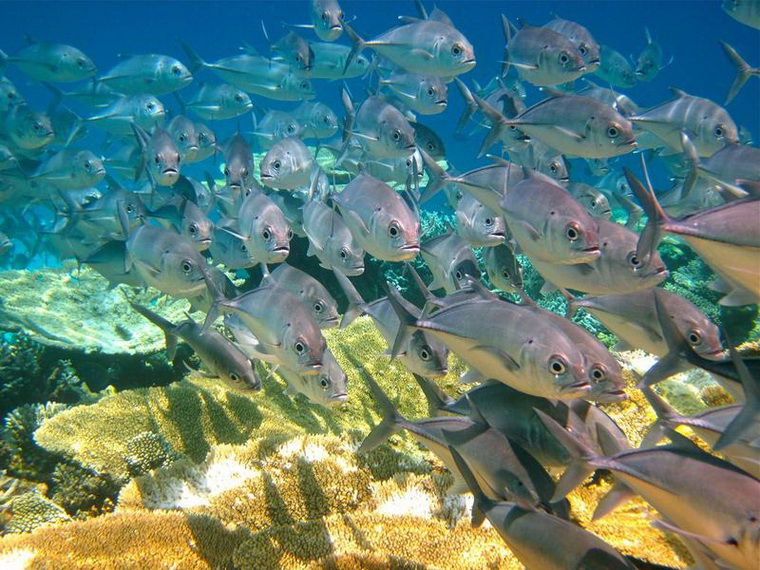 In addition, the atoll is surrounded by coral reefs, which protect it from the storms of the Indian Ocean. These factors are very important when choosing dive sites.

Diving and snorkeling are some of the most popular activities for tourists. Diving in the lagoon itself is optimal for beginners, as there are no underwater currents and unforeseen dangers. Experienced divers prefer more exotic places to dive around the atoll. For example, a sunken World War II ship, resting on the bottom and attracting fish and divers.

Plus, there are a lot of corals in the waters of the atoll, which survived during the epidemic of 1998. At that time, many corals on other islands in the Maldives died because of the rapid rise in water temperature. Some corals of Addu Atoll are almost on the surface, so you do not have to dive deep. Interesting varieties of corals are found in the surrounding area. These are branching corals, brainiac corals, and table corals. They can be hundreds of years old.

About first-class service, excellent beaches, palm trees and a sense of perfect recreation, it probably makes no sense to write. It’s all very clear – after visiting the Addu Atoll, you will plunge into the world of paradise tropical islands. 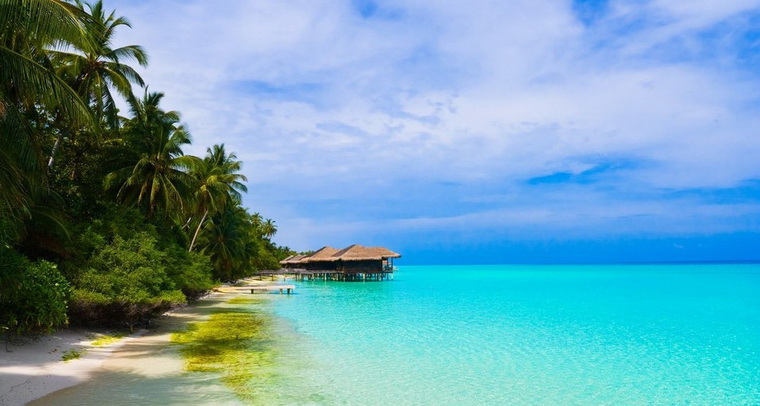 For tourists offered tours by boat on the nearby islands. For example, it is worth visiting the islet Fuamulaku, located 40 km northeast. There you will find the remains of an ancient temple and thickets of orange trees, mango and pineapple groves. It is believed that the inhabitants of this island are very long-lived and practically do not get sick.

How to get to Addu Atoll

There is no direct ferry connection to the atoll. Sometimes cargo planes are flown to Addu, which provides for the carriage of passengers. But the best way is to use local flights from Whelan Airport on Hulule Island, located just to the right of Male. The planes are usually small, light-engine planes. Flight time will be about an hour and a half. 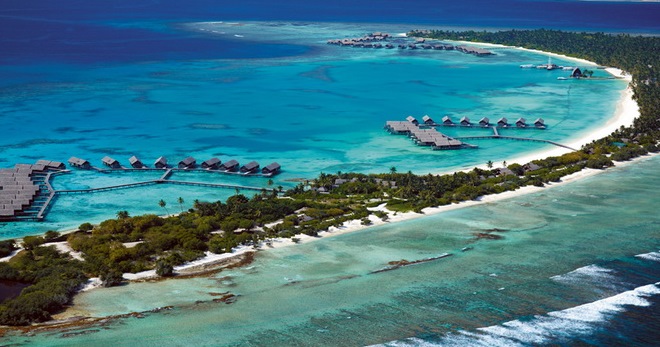 A fabulous scattering of islands of different sizes – atolls – the Maldives are famous for. A great place for a first-class vacation is one of these Maldivian atolls – Addu, almost entirely covered with flowering shrubs and banana palms. The atoll has a second name – Siinu, but most often it is used just Addu. Wonderful service, excellent beaches with airy sand and clear water, comfortable hotels, local cuisine and water activities of Addu Atoll in the Maldives, certainly deserve attention of every tourist.

Addu is a piece of paradise in the Maldives, represented by 23 different islands scattered across the Indian Ocean in the shape of a huge horseshoe. In fact, only 6 islands are inhabited, the rest of the land is very small, but ideal for an absolute communion with nature. From north to south, the atoll stretches for 14.5 km, from east to west – 18 km. The total area reaches 15,7 square kilometers. Being the most southern atoll of all Maldives’ archipelago, Addu is almost on the equator, in 478 km from Male. In the center stretches a turquoise lagoon.

Among all the placer of tiny islands of Addu the largest are:

Especially popular among tourists is the southernmost resort of Addu Atoll – Gan, quite unlike the other islands of the archipelago. Here, among the banana and coconut palms, bearing fruit all year round, reigns a true tropical paradise. Tourists find on the island quiet fishing villages, diving center, boatyards, and everything you need for a comfortable stay. In addition, Gan has its own airport. 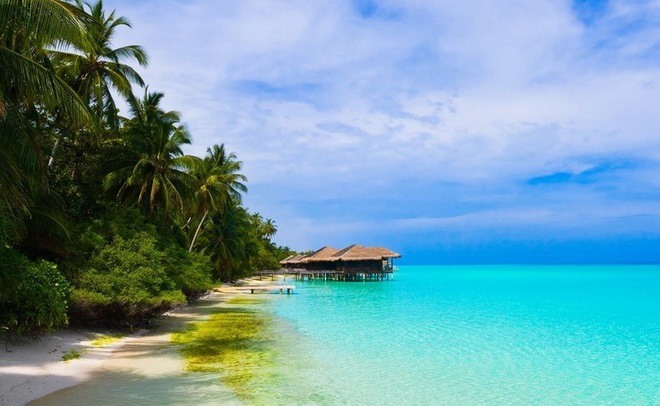 Addu Atoll is dominated by a monsoonal sub-equatorial climate. From November to March, under the influence of the northeastern monsoon, the dry season reigns, while from June to August, on the contrary, the rainy season begins with the arrival of southwestern winds. The weather is hot throughout the year. The temperature ranges from +24°C to +30°C. From January to February is a bit cooler, but the thermometers will not fall below +17 ° C. The temperature maximum is from April to May, but does not exceed +33 ° C. 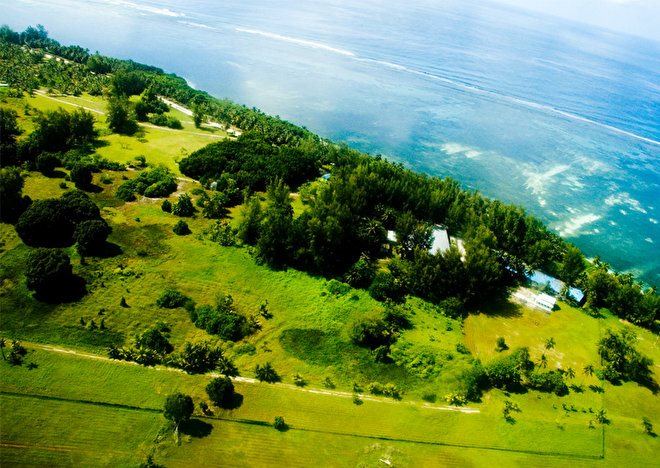 Attractions of the atoll

Historical sites and architectural monuments in Addu Atoll are very rare. This category of places includes, for example, the ruins of an ancient temple on the island of Fua-Mulaku. But the natural attractions here are a huge variety. Very rich underwater world, in the waters of the atoll grow unique brained and branched corals, and at a depth of about 30 m lies sunken British oil tanker. In addition, on one of the islands of the atoll bathes a small freshwater lake, which is beloved by red and orange parrots. 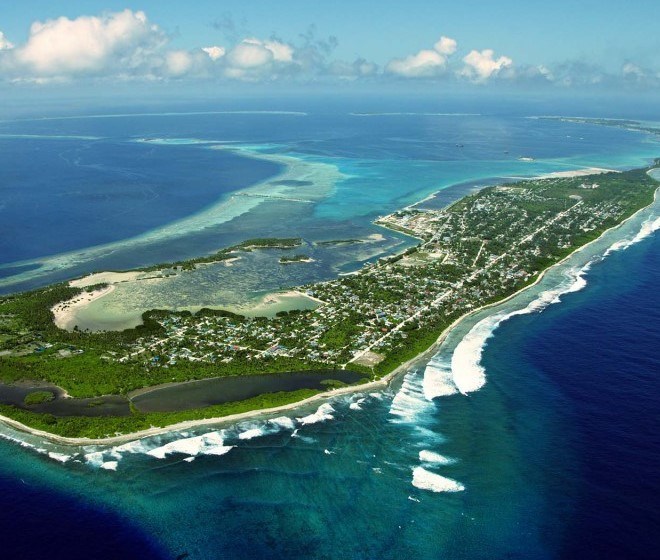 The most popular activities for tourists in Addu Atoll are diving and snorkeling. The Blue Lagoon is perfect for beginners as there are no unexpected dangers or underwater currents. Experienced divers will find more exotic places. On the island of Gan is a diving center Diverland – here tourists can always rent special equipment. On the territory of the atoll you can find secluded places for swimming with fabulous scenery. For vacationers organize trips on a boat with a glass bottom to get acquainted with the inhabitants of the Indian Ocean.

READ
Kauai Island Hawaii, where on the world map and description 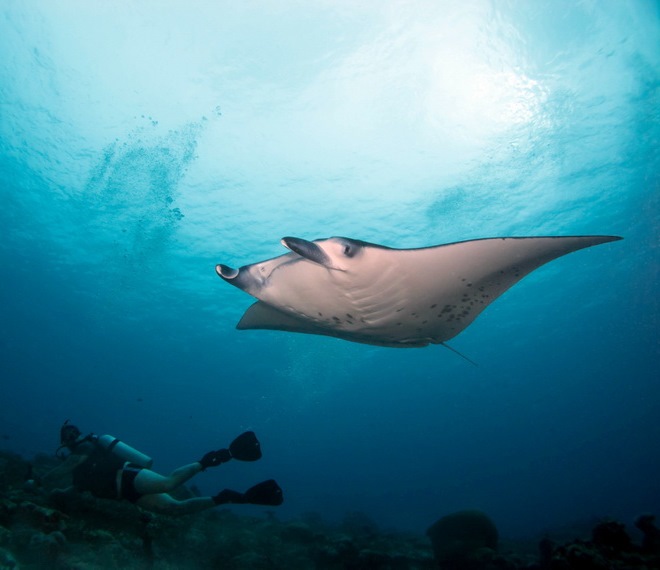 Several comfortable hotels are located on the island of Gan. One of the two three-star hotels, Equator Village, is considered the most affordable. Each visitor, having a rest within the walls of this hotel, receives a certificate of crossing the equator. J Resort Handhufushi is distinguished by its first-class service. The price for a double room starts at $120, but the hotel is extremely popular with visitors. Another great option for accommodation is Shangri-La Maldives Resort & Spa, which is part of an international chain of luxury hotels. The Aquaventure Manta Lodge is considered more economical. 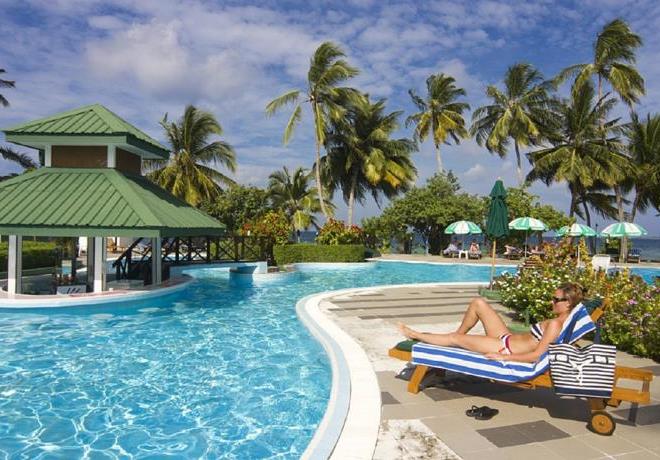 Travelling through the expanses of the archipelago, tourists can find catering facilities on each of the major islands. The few restaurants on Addu Atoll serve Indian, international, Asian and Maldivian cuisines. On the island of Gan is a cozy restaurant in the French style – Le Bistro de L’Ossau. Culinary masterpieces of local chefs can be tasted at Palm Village and Quench Restaurant. Open-air tables for romantic dinners are offered at Delifresh. 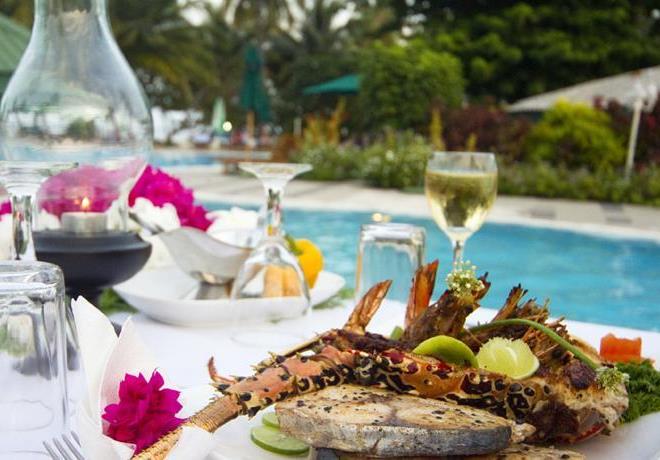 Those who like to store while vacationing in the islands of Addu Atoll will not be disappointed. There are quite interesting souvenir shops, street markets and stores, where you can always pick up gifts to loved ones. Popular among tourists enjoy the coconut monkeys, colored shells and sarongs, real shark jaws and mats made of palm fiber. On the shelves of local stores you can find a wide range of t-shirts, bags and toys with national symbols. However, keep in mind that any product on the islands of the atoll is very expensive. Of course, you can haggle, but the maximum you’ll get is $2-3. 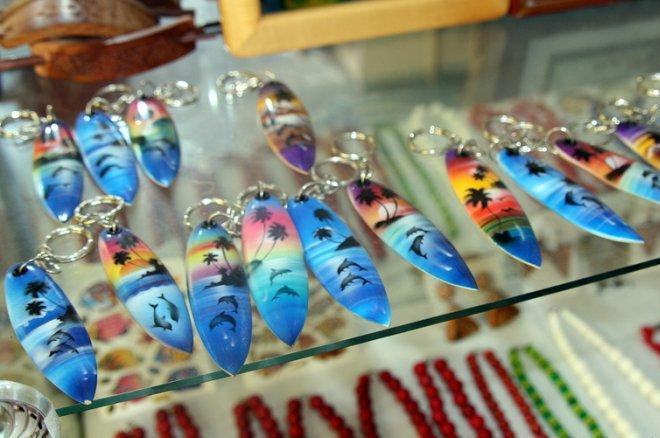 There is an international airport on the island of Gan, which receives both domestic flights from the capital and charter flights from Europe. Through the two major islands that make up the Addu Atoll in the Maldives – Gan and Hitadu – there are highways. There are no buses here, so the public transport functions are performed by local cabs. The four islets adjacent to Gan, which are connected by causeways, can be accessed by bicycle. Mopeds and bicycles are the main means of transportation on the atoll. You can also rent a dhoni or a speedboat. 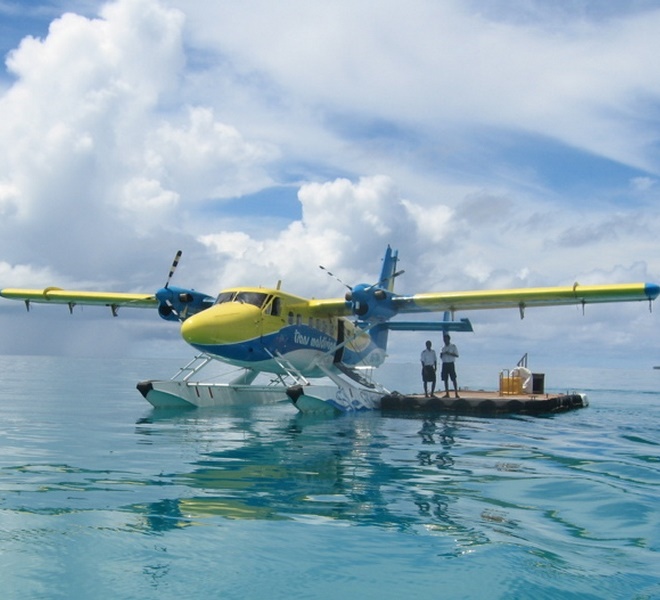 How do I get to Addoo?

The fastest and most convenient way to get to the atoll is by plane on local airlines. From Hulule International Airport, which is located in Male, flights are operated by several airlines. Light aircraft ATR-72 fly daily. The flight takes about 1 hour. A round-trip ticket costs about $280. You can also reach Addu Atoll by water. Depending on the type of boat, you can choose from $100 to $400 per day.