Alley of Chiefs. This is how they now call the underwater museum in the Black Sea near Cape Tarkhankut. Over 60 busts, statues and monuments lurk on the seabed, waiting for the tourists.

The exhibits stand at a depth of 12 to 19 meters. To see them better, you should put on a wetsuit, dive, and immerse yourself in the depths of the sea.

Where to find it

You can find the Underwater Museum in 100 meters from the coast of the Tarkhankut peninsula in the area of the diving center Afalina fishing camp Atlesh. It is located on the cape Bolshoi Atlesh in the western part of the Crimea.

Underwater museum of the Crimea has no clear structure. But it is customary to allocate two, so-called “halls”. They are separated by an underwater arch.

In one of the halls are the active theorists, followers and leaders of the socialist revolution of 1917. Among them are Klim Voroshilov, Felix Dzerzhinsky, Karl Marx, Joseph Stalin and, of course, Vladimir Ilyich Lenin himself.

Because of the abundance of statues of revolutionary figures, this place and called the Alley of Leaders. But apart from them, you will see a lot of other statues in the underwater museum.

The second “hall” is dedicated to the classics of art and literature, the world’s famous landmarks and prominent personalities. There is an underwater Eiffel Tower, the American Statue of Liberty, the Petronas Towers, London Bridge, a bust of the legendary cosmonaut Yuri Gagarin, and statues of Gorky and Ostrovsky. Mayakovsky, Vysotsky, Shukshin, Yesenin, Tchaikovsky you will also find here.

Every year the exhibition expands. Statues of the founders of the Esperanto language and a monument to the cell phone have been added.

History of the Underwater Alley of Chiefs

The ideological inspirer and actual creator of this exhibition was Vladimir Borumensky, a native of Donetsk. August 25, 1992 he first “drowned” here Karl Marx, Klim Voroshilov and two Lenins. This was the beginning of the formation of an entire underwater exhibition. 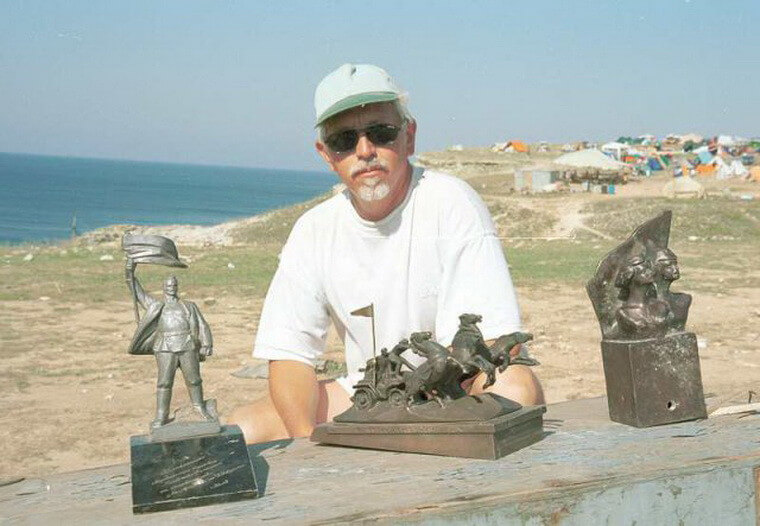 Vladimir Borumensky – Founder of the Alley of Leaders Museum

Borumensky said that he was inspired to create this extraordinary exhibition by the events in Ukraine at the end of the 20th century. At that time, when Ukraine became independent, it began to actively sell scrap metal abroad, including some monuments.

Ordinary monuments were hardly of high artistic value, but their rapid disappearance forced Vladimir to “hide” some statues at the bottom of the sea.

An interesting fact is that the founder of the underwater exhibition did not call it a museum for a long time. But in 1996 an Italian newspaper wrote an article about the exhibition, and called it a museum. 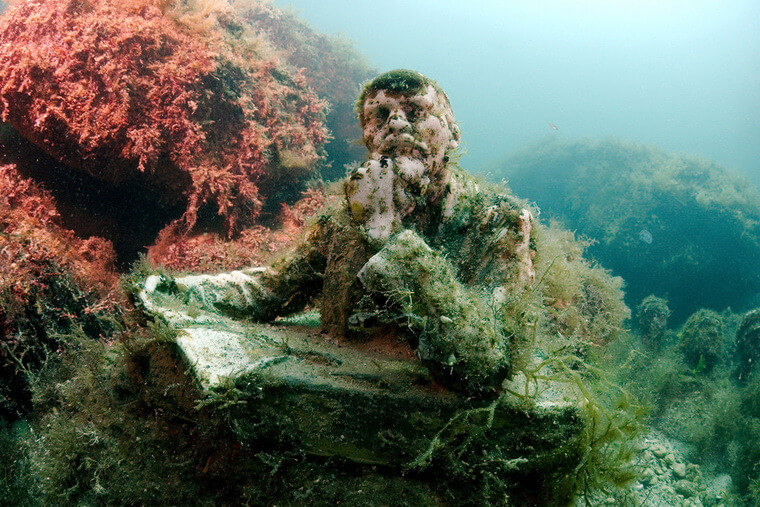 Alley of Leaders in tourism

Now this place has become a popular attraction in the Crimea. Many tourists seek not only to enjoy the beautiful views of the sea and the coast, but also to walk in a scuba diving on the Alley of the Chiefs.

An interesting fact – the point of stealing the exhibits of the underwater museum is completely absent. The statues have no value whatsoever. Instructors of the diving center periodically remind us of this.

It is noteworthy that unlike the famous Mexican underwater museum in Cancun, the exhibits of the Alley of Chiefs are often cleaned of marine growth.

By the way, the coast of the Canary Islands has its own underwater museum Atlantic.

The starting point to the Alley of Chiefs is Olenevka village in the western part of Tarkhankut cape. From there you can drive 5 more kilometers to the south down the country road to the diving center Afalina. 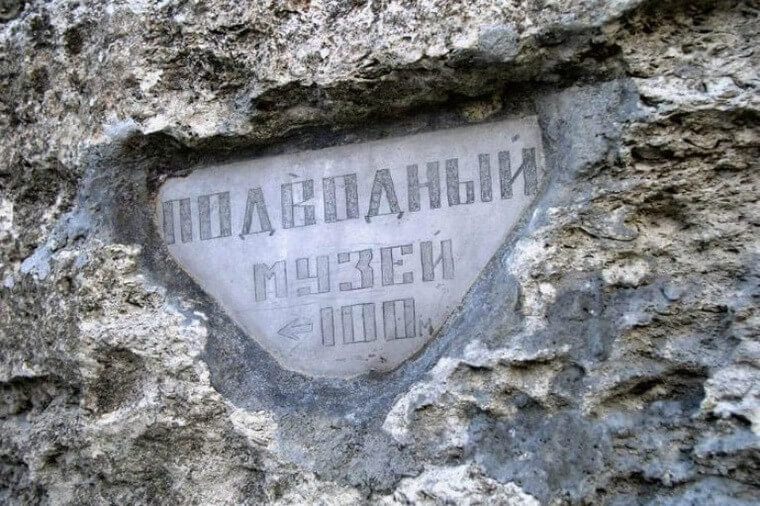 You will see a sign to the museum next to the diving center.

To see the underwater museum itself, you must pay for diving equipment and services of an instructor. 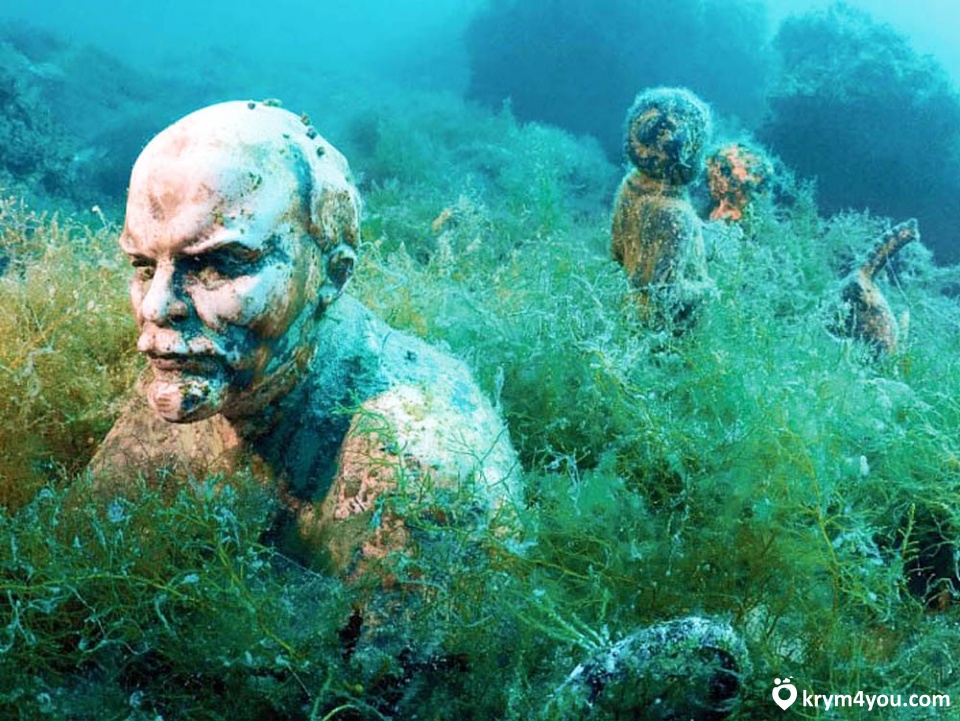 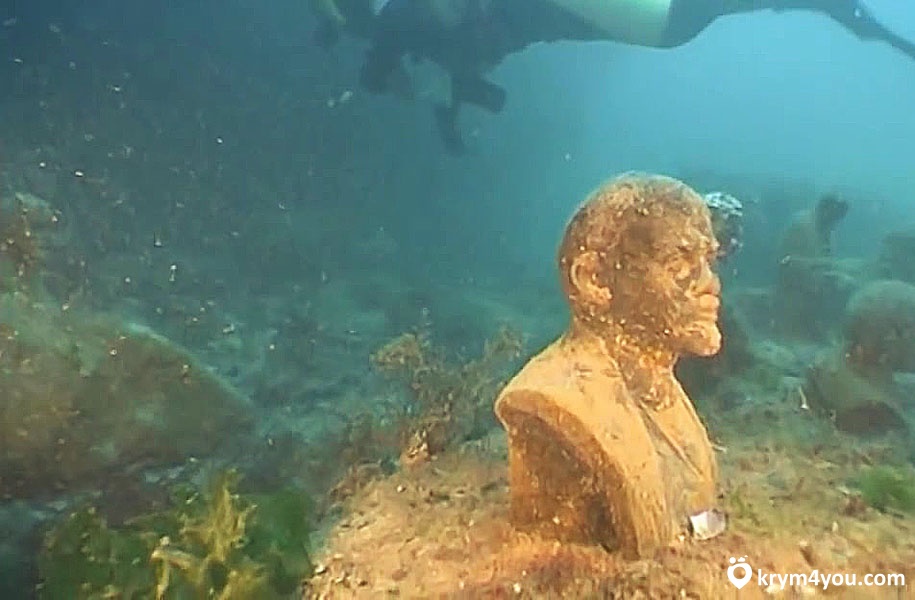 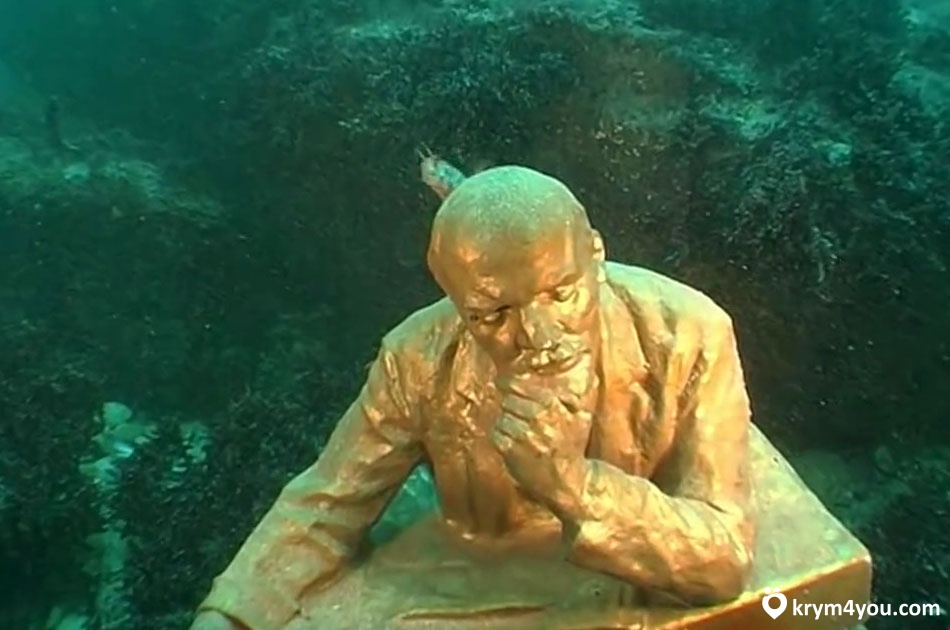 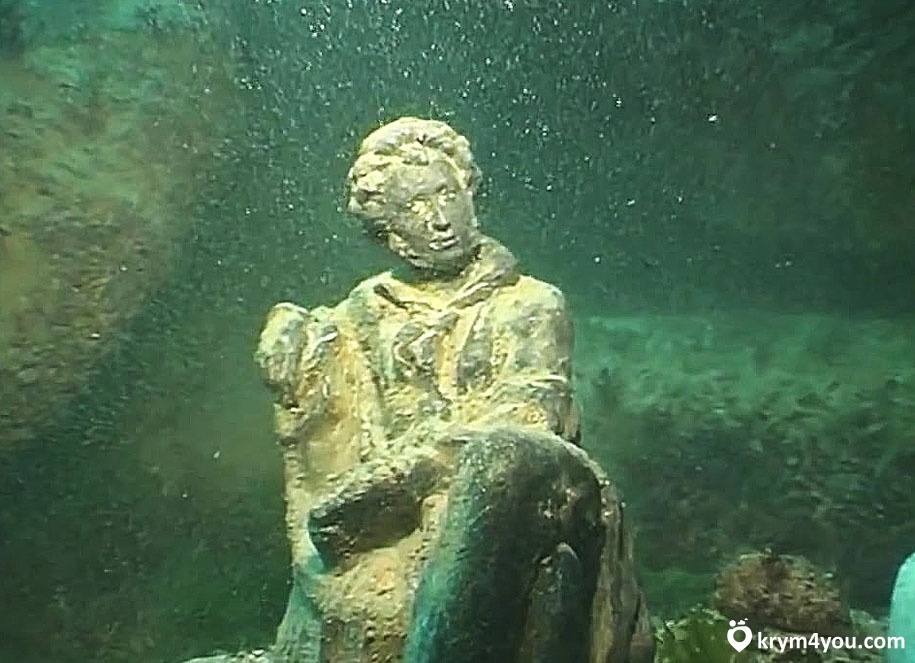 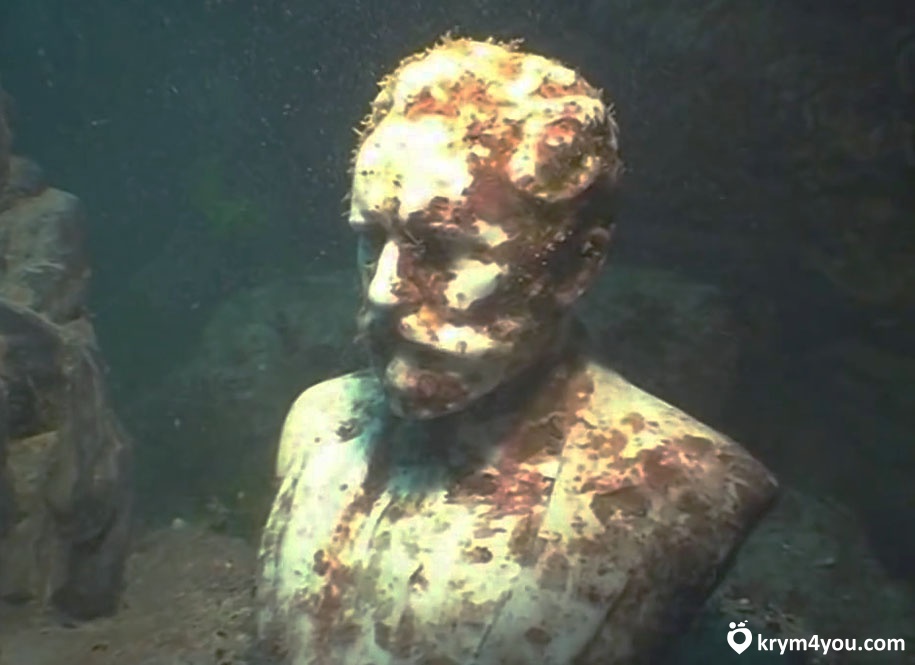 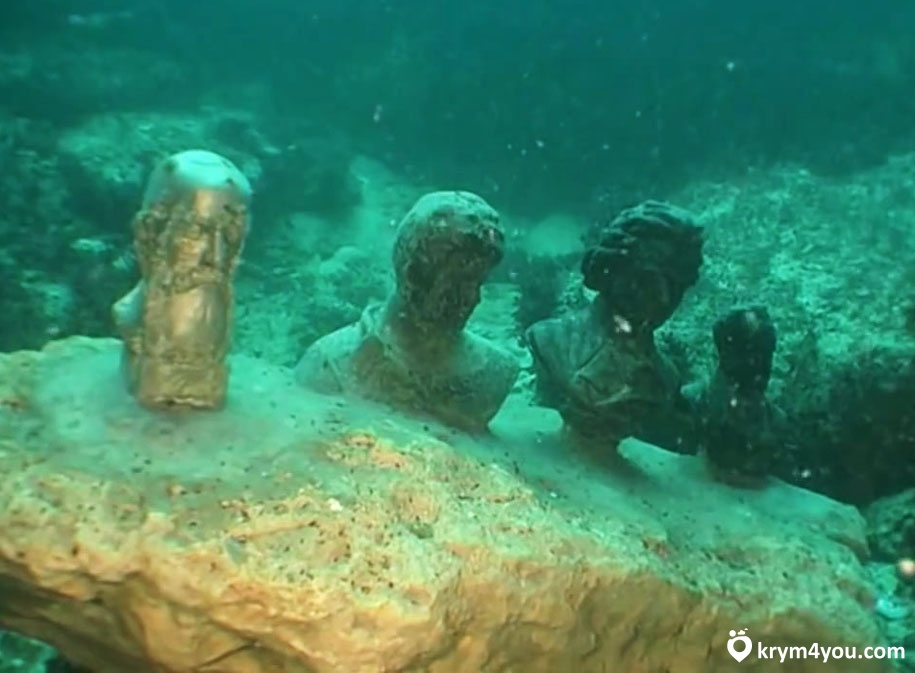 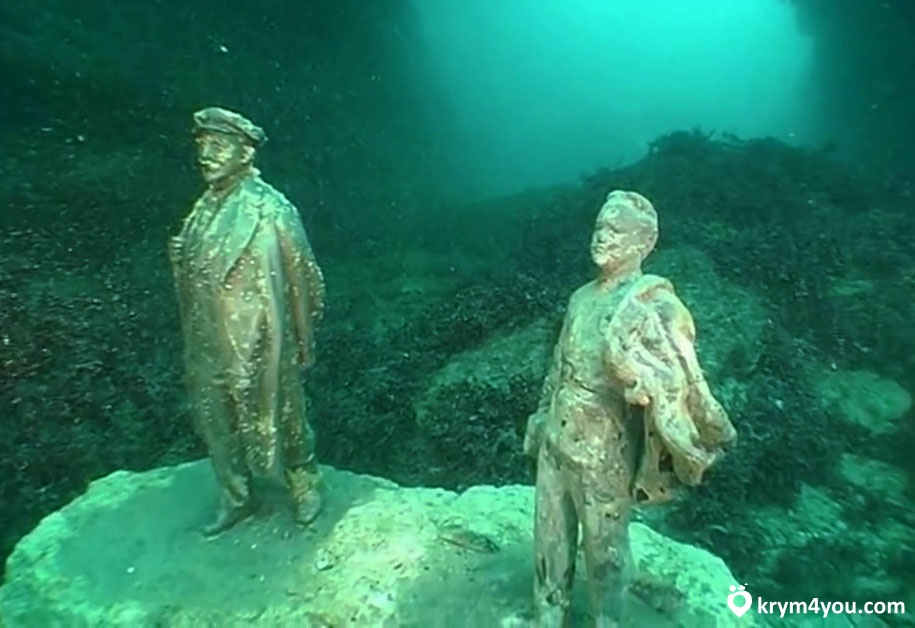 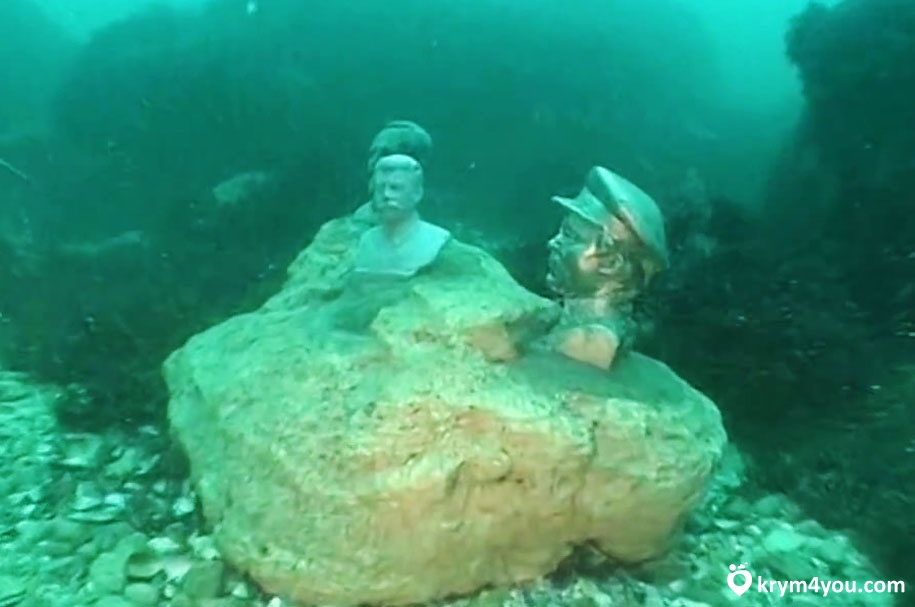 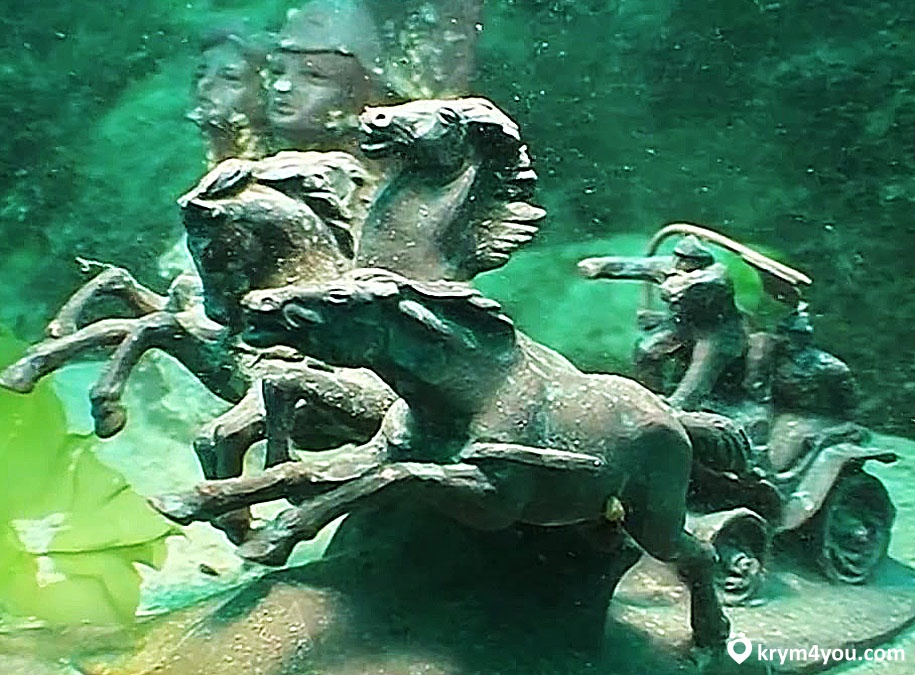 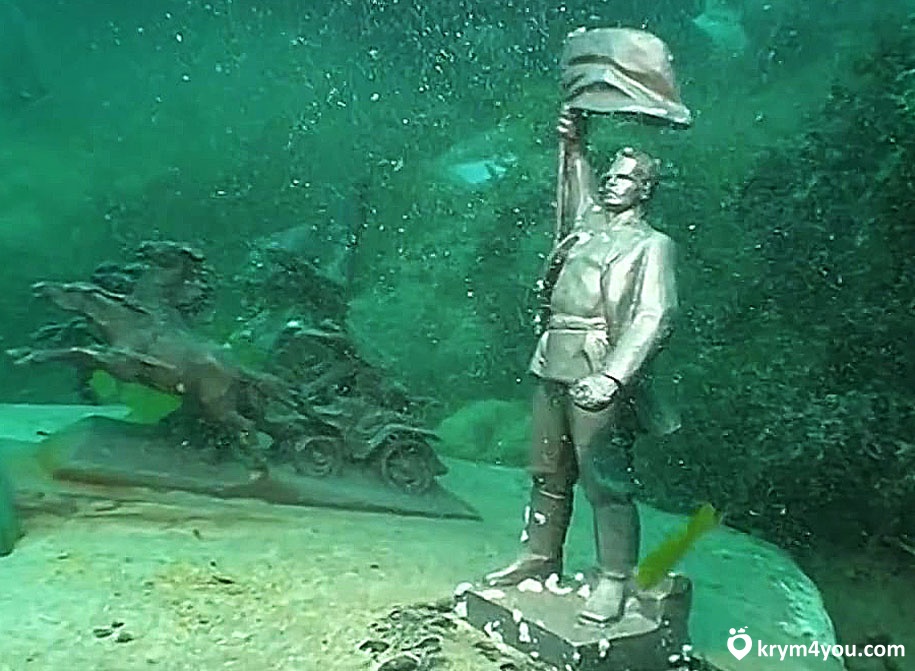 There is a place on the west coast of Crimea, a place familiar to everyone who counts himself as a diving enthusiast. Of course, this is Cape Tarkhankut. He is considered almost the best Crimean place for diving. The water itself Tarkhankut very clean and attractive flora and fauna, but especially interesting underwater museum, the so-called “Alley of Chiefs”. It is located one hundred meters from the shoreline of the Great Attlesh at a depth of about twelve meters.

Underwater Museum Tarkhankuta was founded August 25, 1992. Such an unusual idea came from a diver from Donetsk Vladimir Borumensky, who was an instructor of the club divers “Neptune”. A year before the creation of the underwater museum, V. Borumensky delivered and installed on Cape Tarkhankut monument to Lenin, which had been dismantled in Donetsk. But a year later barbarians destroyed it, decapitating the monument. It was then that the decision was made to move the monument to the bottom of the Black Sea. Thus, the monument became the first museum exhibit of the “Alley of Leaders”. Then every year the exposition of the underwater museum at Tarkhankut expands. In addition to the Lenin monument, there are the busts of Karl Marx, Kirov, Zinoviev, Dzerzhinsky, Stalin, Voroshilov and other figures of the Soviet party leaders. And one day Borumensky saw a bust of composer Ludwig van Beethoven on the market square and decided to buy it for the underwater museum. Thus was born a new trend in the development of this museum – to install monuments not only to leaders, but also to artists. Now there are busts of Vladimir Mayakovsky, Sergey Yesenin, Vasily Shukshin, Pyotr Tchaikovsky, Vladimir Vysotsky, Alexander Blok and others on the seabed. In general, the Tarkhankut underwater museum has over fifty exhibits and this is not the limit. By the way, a separate place for the statue of Adolf Hitler, which have to bring divers from Germany. Every summer, divers clean the museum “halls”. They clean the monuments of algae and sea life and put them in order. A lot of tourists-divers gladly come to the Cape Tarkhankut to visit the underwater museum. There are regular excursions at the cape, which include giving out the necessary equipment for diving or fishing. About the “Alley of Chiefs” even made a documentary film, which took part in the festival of international level. Also, after the release of this film, it was written about in Italian newspapers.

READ
Kola Superdeep Borehole is the deepest in the world

Underwater Museum of Tarkhankut on the map of Crimea 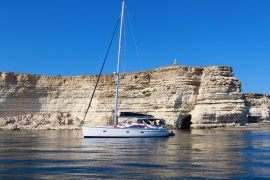 Olenevka village In the west of Crimea, almost in its most extreme part is the village Olenevka. Along the Karadzhinskaya bay from south to north extends the ownership of the village, and in its center there are three lakes – large and small Kapchak and Lyman. Lake Liman is famous for its therapeutic mud and is not inferior to Saki mud baths. The climate is subtropical, transitional to … 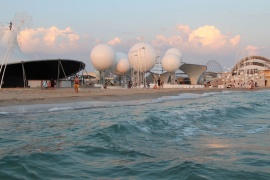 Village Popovka Endless sandy beaches, clean sea in the vicinity, within a radius of 95 km or so there is no industry, a large coastal zone, a lot of crabs, fish and other creatures of the sea, the cleanest sea air and all this about the village Popovka. Popovka village is on the west coast of Crimea, belongs to the Saki district, the nearest large city Evpatoria is 28 km away. Not far from the… 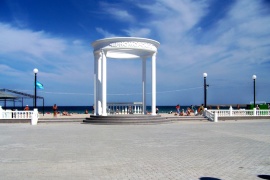 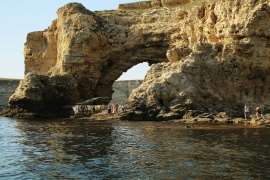 Okunevka village Crimea Okunevka settlement is situated on the west coast of Crimea. The nearest large settlement Olenevka is in 13 km. The distance from Okunevka to Yevpatoria is 78 km. The village is located on Cape Tarkhankut, without exaggeration the most ecologically clean place of the Crimean peninsula. Within a radius of 70 km there is no production and industry, most of the Tarkhankut is a… 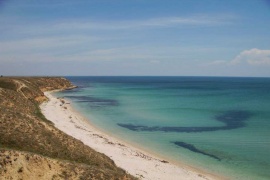 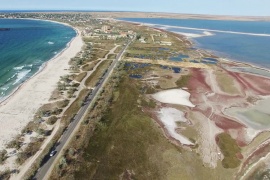 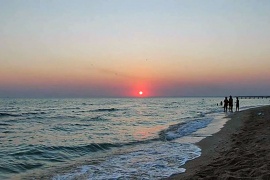 The village Shtormovoye in Crimea is situated on the west coast of Crimea, in 27 km from city Evpatoria. Nearby are the villages Myrny and Popovka. Settlement by the standards of the Crimea is young, founded in 1904, the first name was Voznesenovka, in 1924 it was renamed Frunzevku and in 1979 was named Shtormovoye. Why the village was given such a name, it is difficult to explain, the storm is not … 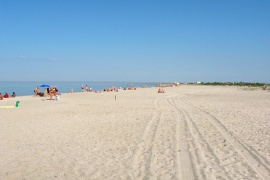 Myrny village, Crimea Myrny village is located on the west coast of the Crimean peninsula, 32 km from Yevpatoria. The population of the village of Mirny – 4210 people. The climate is temperate passing into subtropical. Geographical coordinates of the village of Mirny on the map of Crimea GPS N 45.308333, E 33.033333 The village was formed relatively recently, in 1969, was a secret military base of submarines,…