Alphabet Tower in Batumi: map, photo, video, how to get there

Alphabet Tower in the city of Batumi probably saw all tourists who come to the resort without exception. There is no mystery in it. It just towers over the city, more than 100 m (or even 130 m to be exact).

Even though this openwork structure is located next to high hotels, actively building a skyscraper financed by the newly elected U.S. President Donald Trump and other no less magnificent sights (Ferris wheel, moving statue of Ali and Nino, etc.), the tower stands out for its unusual shape and interesting idea, which unfortunately has never been fully completed.

Batumi Tower can be safely attributed to the new modern structures that have appeared in the city recently, namely in 2012. Architect was a talented Spaniard, Alberto Domingo Cabo. Thanks to his creation, not just a symbol of the city appeared in Batumi. This is an original structure, which was able to show the love and reverence for the Georgian people for their native language: the whole height of the structure is wrapped with ribbons with 33 letters, which look like DNA. 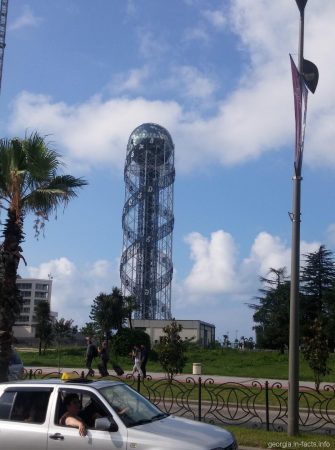 During the day the tower looks less presentable, but it still stands out against the background of other buildings.

Originally, the plan was to have a TV studio, an observatory, an observation deck and a restaurant slowly rotating on its axis. What went wrong is unknown, but at the time of our visit to the city (in 2016 and 2018) there was nothing in the building. Many people write that sometimes the restaurant is open, but it is not stable, everything in it is unreasonably expensive and tasteless.

Looking at Batumi from a bird’s eye view (from the top of the tower) is not so easy either. There is an elevator inside the building, and it works on the same days as the restaurant. This pleasure is paid and will cost you approximately 12 GEL.

READ
The temple of Pura Besakih is the most important temple on the island of Bali. Indonesia

Like all interesting buildings on the city’s waterfront, the Georgian Alphabet Tower is best viewed in the evening, when the lights are on. Near the building you will find a lot of convenient benches, a pier with boats, all kinds of stalls with fast food, entertainment for all ages (Ferris wheel, playground with cars, etc.), places for roller skating.

Alphabet Tower on the map of Batumi

The Georgian alphabet tower is located in a convenient place, it’s just impossible to miss it when walking along the seafront of Batumi. To avoid confusion and wandering around the resort, we attach a map below, with which you can orient yourself on the spot and see a few more sights.

To see the street names in that area of town, just zoom in on the map by clicking on it in the upper right corner (the rectangle). Marked icons also carry information. By clicking on a particular symbol, you can learn something useful about the landmark.

How and how do I get to the Georgian alphabet tower?

Going specifically to the tower, we would not advise. But if you take into account the other beautiful places nearby, you can successfully combine everything and see them at the same time.

If you live on the opposite side of the embankment and a long walk along it is not in your plans, you can get to the Wonderland Park (where all the most interesting things are located) by bus or car. Suitable numbers of buses: 1, 1a, 2, 4, 10, 13. The driver and the passengers will be glad to guide you there.

Parking for your own or rented car can be easily found near the park.

A selection of photos taken near the Alphabet Tower

On the observation deck of the building we decided not to climb (simply did not consider it necessary to spend money on dubious entertainment). So all the pictures posted here were taken from several points in the park, looking at the Georgian Alphabet Tower itself at different times of the day. 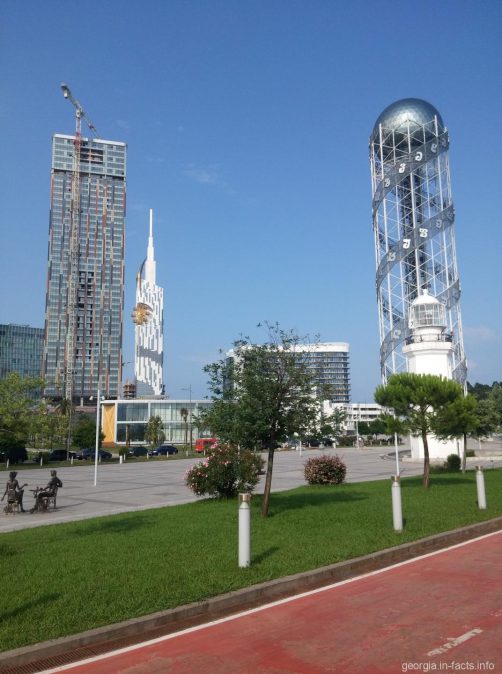 In addition to the Alphabet Tower, there are many interesting things to see in Wonderland Park. For example, on the left side of the photo you can see the statue “Me, You and Batumi”, near which tourists like to take pictures. 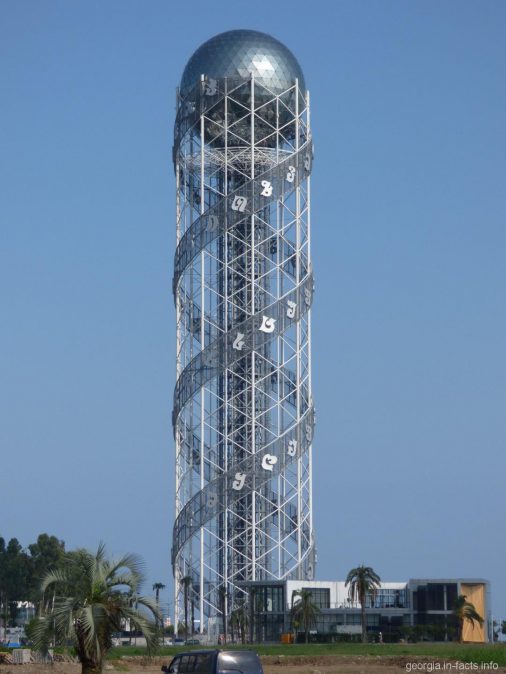 On one side in front of the Tower is a vacant lot. Most likely, another bright building will appear here in the near future. 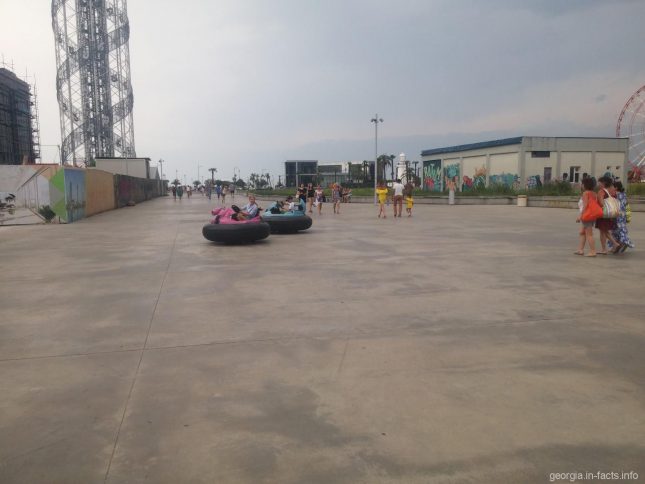 The square not far from the Tower is also used to the maximum. There every evening you can see children, teenagers, and sometimes adults riding these cars. 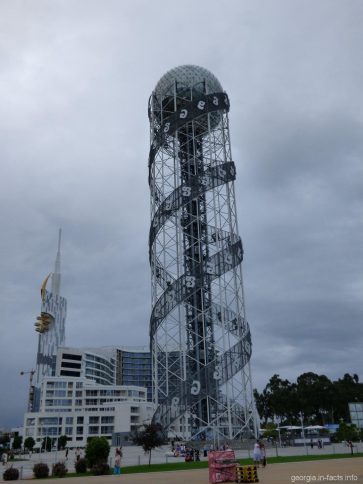 Under the dome of the Tower, is a good observation deck on three levels, but to get there is not easy and, frankly, expensive. 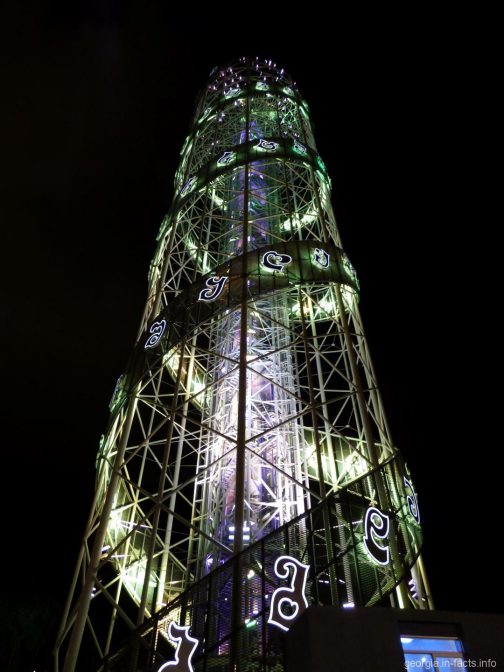 Downstairs they sell tickets to the observation deck of the Tower. But if you make a reservation at the restaurant under the dome, the elevator ride is free.

A small video, which is still hard to convey the beauty of the waterfront of Batumi. Come and see it for yourself: 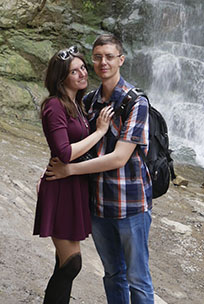 We are glad to see you in our site!

We hope that you will find it useful, because we love not only to travel, but also to share our own experiences and findings.

All information in the blog is checked by us personally. We write only about those places and countries, where we were ourselves!

We will answer your questions about vacation and its organization in the comments.

We often travel and we know how to organize a vacation in the easiest and cheapest way. 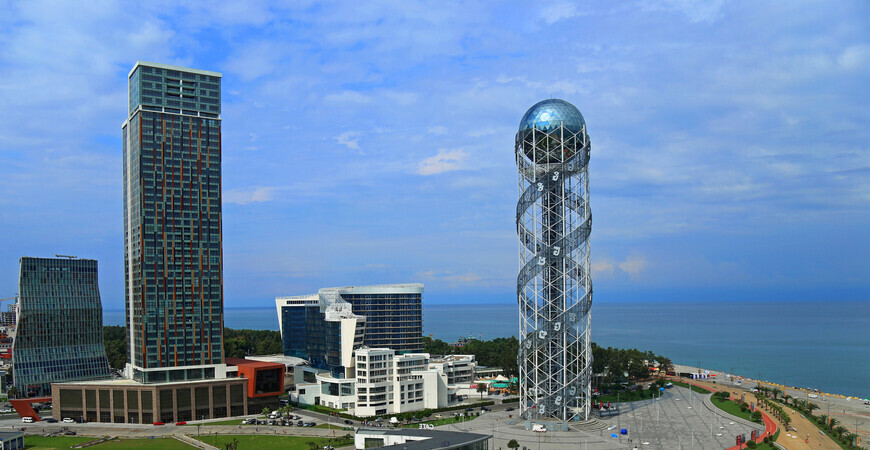 Monument to the Georgian alphabet (also met the names “Alphabet Tower” and “Alphabet Tower”) is a unique architectural structure located in the capital of Adjara, near the city beach. The monument, stretched upward, resembles the structure of DNA. This resemblance in architecture expresses the phrase “Language is the genetic code of a nation.”

Together with the sculpture “Ali and Nino” it belongs to the modern art of Georgia and forms a new image of Batumi in the so-called “Park of Wonders” area, where several other small sculptures are installed. The object is one of the most photographed attractions and has no analogues in the world.

The construction is a structure with 33 letters of the Georgian alphabet wrapped in ribbons, each letter is 4 meters high. The letters are made of aluminum. The internal structure of the tower is similar to the famous Shanghai Tower: in the center of the tower there is a rod, and the outer perimeter is belted with a ribbon of letters. The outer and inner parts are communicated by metal diaphragms in the form of stars every 10 meters.

According to the first plan, the tower was to be not only a monument, but also a functional structure. It was planned to have a television studio, an observation deck, an observatory, and a restaurant rotating on its axis. Currently there is only a restaurant in the building. But, according to the reviews of tourists, it is often closed, the food there is not very good and even the most simple items on the menu are quite expensive.

In addition to the restaurant (during working days), there is an elevator that takes tourists to the top of the tower. The ascent costs 20 GEL. The elevator takes tourists to the first level, then you need to change to the second elevator. It will take you to the observation platform at the top. There is also a kiosk with souvenirs, exposition with photos of Batumi in former times and information booths, telling about other sights of the city. Instead of walls in the elevator there is glazing, but it is slightly darkened.

If you do not plan to go up, it is worth coming to the tower of the Georgian alphabet in the evening. The illuminated structure looks much more impressive than it does during the day.

The Alphabet Tower in Batumi appeared relatively recently – in 2012. The author of the project was Spanish architect Alberto Domingo Cabo (the famous Spaniard was also the chief architect of the Georgian Parliament building in Kutaisi and the Tbilisi Ministry of Internal Affairs). The tower was built by the Spanish construction company CMD Ingenieros.

The tower was built using budget funds. The Presidential Fund together with the Batumi City Hall allocated 65 million GEL. But the construction cost 1 million GEL less. The construction of the structure began in October 2010, and was completed a year later, in December 2011. On July 9, 2015 the tower building was leased for 20 years to the Spanish company Boost Spain S.I. for a symbolic fee of GEL 1, which Batumi residents were very dissatisfied with. The decision was due to the fact that the City Hall can not afford to maintain the facility.

According to one version, the alphabet was based on Aramaic or even Coptic writing. According to the most widespread version Georgian alphabet has an Armenian origin. But there is no unified theory up to now. Now the alphabet consists of 33 letters, 5 letters were removed as archaic.

How to get to the Alphabet Tower in Batumi

The nearest public transport stop, “Drama Theater”, is on Rustaveli Avenue (near the roundabout). You can get to the stop by buses 10, 10a, 15.

You can also get to the tower by cab. The trip with a driver in Batumi is not very expensive. You can learn the price in advance and order a car through applications: Yandex.Taxi, Maxim and Bolt.