The Amber Museum is called one of the main museums in Kaliningrad for a reason. There is nothing like it in Russia. According to various estimates, the village of Amber in the Kaliningrad Region contains from 70 to 90 percent of the world’s reserves of the “sun stone”. This is why the largest amber museum should be situated not just anywhere, but in Kaliningrad.

It occupies the tower of the Don, a historic building which has the status of cultural heritage. It is surrounded by a moat, and in the courtyard there is a fountain and some benches.

There are more than 16 thousand exhibits in the collection of the museum. After the tour you will know everything about amber: its origin, cost, peculiarities of mining and processing. You will get acquainted with the masterpieces made of this stone – both impressive artifacts, and miniature jewelry pieces. You’ll see insects and lizards imprisoned in amber. Admire a huge piece of the Baltic gem, weighing over 4 kilograms and the Amber Room.

Working hours: 10 am – 6 pm, Mondays off in winter, seven days off in summer.

The Don Tower on the shore of Lake Superior, where the museum is located, was named after the Prussian military engineer Friedrich Carl zu Don who took part in the war of liberation against Napoleon in the early 19th century. The massive red brick building was built in the neo-Gothic style in the middle of the 19th century, and it was part of the inner city defensive belt – the so-called “Night Featherbed of Koenigsberg”.

At the beginning of April 1945 the Red Banner flew over the Don tower. In the 1970s, the restored building housed the Amber Museum. Most of the exhibits came courtesy of the Kaliningrad Amber Combine, which mines stone in the village of Yantarny. But there are also gifts from Russian and foreign masters, from Russian and foreign museums, including the collection of works, received from the Armory. And, of course, archaeological excavations – an inexhaustible source of replenishment of the museum’s collection.

The museum exhibition is divided into two parts – natural science and cultural-historical, they occupy three floors. The first one is represented with amber specimens of different weight, colors and transparency. The biggest piece of amber in Russia, weighing 4,3 kilograms, is amber exactly here. The most interesting part of the exposition is amber specimens with particles of animals and plants that got into the once liquid and viscous resin tens of millions of years ago.

In the cultural-historical section there are amber jewels and articles of everyday life found on the territory of the Kaliningrad region during the excavations of monuments of the Neolithic period and later times: from the 2nd to 5th centuries A.D. – time of intensive trade contacts between Prussia and the Roman Empire.

The museum also offers visitors to examine the restored fragments of the decor of the famous Amber Room .

The Amber Museum at different times of the year

You can admire and study amber at any time of year. If you decide to visit the museum in summer, get ready for the fact that there will be a lot of tourists. And the ticket price will go up. But the most beautiful pictures in the vicinity of the museum you can get just in summer. The green lawns, blue of the Upper Lake and red brick walls of the Don Tower – beauty!

Where to make a beautiful photo

The inner courtyard of the castle is very picturesquely twined with ivy. Photo: Maria ZARBALIEVA

The best way to photograph the Don Tower is from Marshal Vasilevsky Square, which is located across the street. A good place for a photo session is the Gothic-style courtyard with a round fountain. Good pictures are taken near the museum, on the shore of Lake Superior – there is a picturesque humpbacked bridge, which beckons for photos. 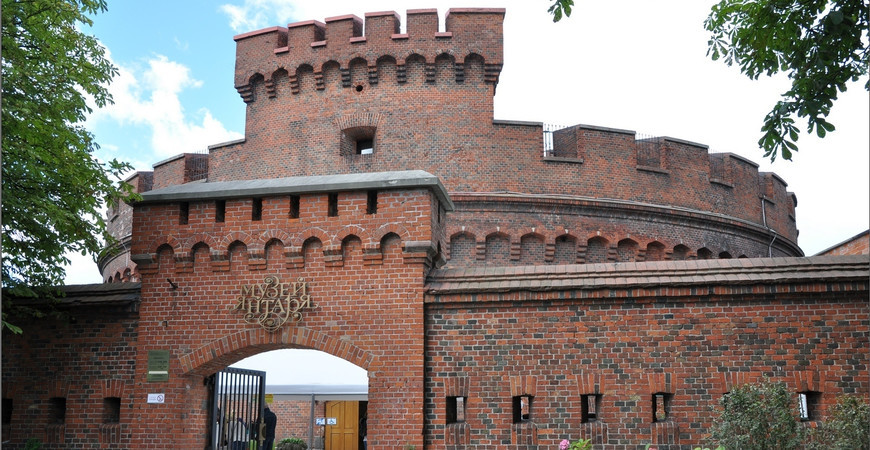 Amber museum is the most interesting exhibition center in Kaliningrad – the city, where the world’s largest amber deposit is located and the only enterprise, which processes the “sun stone” on industrial scale.

Visitors of the museum will learn about the history of mining and studying amber, and see the best examples of the stone and products made of it. The exhibition presents amber in the interconnection of different sciences: paleontology, mineralogy, geography, history, art history and others.

Amber is the petrified resin of ancient coniferous trees. Trees could be found more than 40 million years ago on the Scandinavian Peninsula and around the bottom of the Baltic Sea. The old Russian name of the stone is alatyr.

The only Russian amber museum was founded in 1979 as a branch of the Kaliningrad Historical and Art Museum, became independent in 2003.

The museum is located in the center of Kaliningrad in a historic building – the tower of the Don in the middle of XIX century, part of the fortress complex on the shore of Lake Superior. Previously in front of the tower was dug artificial trench 203 meters deep for protection from the enemy.

The cost of tickets for the permanent exhibition and all exhibitions depends on the age of the visitors:

Parents with children of preschool and school age are offered a special family rate for all:

The museum offers individual and group tours (up to 5 people) – 1,000 rubles in Russian, 1,400 – in a foreign language, paid in addition admission ticket. Tours can be booked in advance on the museum website.

For 100 rubles visitors are offered a pass to the observation deck of the tower accompanied by a museum employee (group of 4-10 people).

Free guided tours are offered on Saturdays and Sundays at 12 and 4pm. The cost is 50 rubles.

The exhibition area of the museum is three floors, occupying about 1000 square meters, with about 16000 exhibits. The main exposition is divided into natural-science and cultural-historical blocks and is available during all working days of the museum.

The natural part of the exposition introduces unique amber specimens: stones of different weight, size and different shades of color. This part of the museum displays a large number of stones with included remains of animals and plants, which got into the tree resin tens of millions of years ago. Such specimens are especially important for scientists, as they help them learn more about the living organisms and the climate of those times. Getting acquainted with the exposition, it is impossible to pass by one of the most famous exhibits – the biggest in Russia amber stone, weighing 4 kg 280 g.

Cultural and historical section shows articles made of amber: jewelry and household items, made in the Neolithic period and up to the present. For example, there are many findings of unprocessed amber, which was sold at the beginning of our era. The museum presents scientific reconstructions of famous antiquities, which have been lost at different times. Copies of antique items from the Amber Room, which was lost during the Second World War, have also been restored. A significant part of the exhibition is taken by works of contemporary Russian masters and their colleagues from Europe, the U.S. and Japan.

There is a separate complex on the history of Koenigsberg amber manufactory. The manufactory was in operation from 1926 to 1945. Two years later Kaliningrad amber factory – a unique enterprise with a full cycle of mining and processing of the “sun stone”, the only one in the world – started working. In the museum halls are presented some objects of author and serial production, produced at the combine.

In the museum you can also get acquainted with the works of modern masters from St. Petersburg and Kaliningrad. In 2013, the museum received a permanent exhibition “Amber house”. Kaliningrad Museum of Kaliningrad is a unique place for amber mosaic, which is larger than any other similar work in the world.

Kaliningrad Amber Museum is expanding its activities and is actively engaged in organizing and conducting various creative exhibitions and projects, and publishing books. Some of the largest projects: the International Biennial of Amber Art “Alatyr” and the Russian National Competition of Amber Art. The museum has a library and a communication center.

In the framework of the special project “Museum in a magic book” visiting of remote areas is organized to show 3D copies of 30 unique museum exhibits.

A poster of the exhibitions at the Amber Museum and its venues in the Kaliningrad region is available on the official website.

There are events for children and entertaining and educational programs at the museum on a separate page of the site.

Before visiting the museum it is recommended to check its seasonal operating mode.

How to get to the Museum of Amber in Kaliningrad

The main walking route in Kaliningrad leading to the Rosgarten Gate and the Don Tower includes the surviving defensive constructions of Koenigsberg. There are stands with descriptions and a map near each object on the route, and it is convenient to navigate and get there on foot. You can get to the museum directly from the airport “Hrabrovo” by bus 244 e.

The historical complex with the Amber Museum is located near a major transport interchange – Marshal Vasilevsky Square. Here, you can get to the same name stop by public transport:

Map of the route on foot from the stop “Pl. Marshala Vasilevskogo” to the Museum of Amber:

You can get to the Museum of Amber in Kaliningrad by cab: Uber, Maxim, Yandex. Cab, RuTaxi, Gett.

Panoramic view from the tower where the Museum of Amber is located: