Angel Falls are the highest waterfall in the world, with a total height of 979 m. The length from the precipice to the first obstacle in the path of the water is 807 m, after which the flow overcomes another 172 m. For comparison, the Angel is three times larger than the Eiffel Tower and 20 times larger than the Niagara Falls.

The unique creation of nature is located in the dense forests of Venezuela and is a treasure of the Canaima National Park, where it is located. A stream of water fills the Kerep River and partially disperses as fine particles, forming a mist. The moisture in the air can be felt within a few kilometers.

Location of the waterfall

Angel Falls originates on Mount Auyantepui, which has precipitous slopes and a flat, broad peak. The high-mountain plateau contains several layers of sandstone pierced by numerous cracks. It is these fissures that serve as channels for the powerful torrents of tropical downpours often observed in the area. Water collects here even after a small rainfall, allowing the waterfall to exist.

Auyantepui is the largest elevation in Venezuela, its name translated as “mountain of the devil. The name was probably chosen because of the constant thick fog that surrounded the mountain and seemed to the locals a mystical phenomenon. The word “tepui” itself means “house of the gods” in Pemon Indian. Such mountains are often found within the Guiana highlands. They are characterized by their great height, flat peaks, and steep vertical slopes. They are often referred to as “table mountains”, which perfectly describes the shape of the surface. Because of the terrain, the hills are virtually inaccessible, and for hundreds of years no one has set foot here. This area is ideal for the sprouting of unique plants and residence of unexplored animals.

From time immemorial the local Indians knew of the existence of the water stream, they called it Churun-Meru – “the waterfall of the deepest place.” Only at the dawn of the twentieth century it became known to the world. The researcher Ernesto Sanchez La Cruz was the first to stumble upon the landmark, but the American pilot James Aingeley is considered to be the discoverer.

In 1937, an expedition consisting of the pilot himself, his wife Maria and two colleagues, Gustavo Jeni and Miguel Delgado, went in search of ore deposits. Local guides claim that they may also have planned to find diamonds – their existence was told by the natives at the time. In reality, the “gems” were the quartz rocks that abound on Mount Auyantepui. There is also a version that the group was in search of gold.

The miners had planned to spend several days on the plateau, but they failed to carry out their plans. James Angel wanted to land at the very top of the hill, but the attempt was unsuccessful. According to various sources, the landing landing gear burst or the fuel line was damaged. The crash did not harm the passengers, but they found themselves completely isolated from the outside world. As a result, the group descended the mountain on their own, their way down lasting a week and a half.

A view of Angel Falls from an airplane

News of the gold diggers’ perilous adventure spread quickly and the waterfall was named after the pilot. The Spanish variant of Angel’s last name is Angel, so the name became that. The plane stayed on top of the mountain for the next 33 years, then was evacuated by a special helicopter. At the moment, the airliner is placed near the airport of the Ciudad Bolivar settlement in Venezuela.

In 1949, members of the National Geographic Society, one of the largest scientific organizations in the United States, went to the waterfall. The scientists calculated and officially documented the exact height of Angel. All of their observations during the trip were recorded and then published as a book. In 1994, UNESCO listed Canaima National Park and Angel Falls as a World Heritage Site. In the spring of 2005, climbers from England, Venezuela and Russia made the first pass of the wall of the waterfall.

In December 2009, the head of Venezuela, Hugo Chavez, announced the change of the name of the waterfall to Cerepacupa y meru. This was done due to the fact that the natural landmark is the property of the state and cannot be named after a citizen of another country. In addition, the site had been known among the locals long before James Angel discovered it. Such a statement of the President is true for the Venezuelans, but the falls are known worldwide as Angel. Most likely, on the maps of all countries its name will remain unchanged, the innovation will affect only Venezuela.

Angel Falls are located among the tropical vegetation. Venezuelan authorities did not build asphalt roads to this place. Tourists can get to the site by air or by boat with a motor. Fans of extreme experiences have the opportunity to try jumping off the edge of the plateau on a hang-glider.

The village of Canaima serves as the starting point of the journey to the waterfall. The town has many hotels, restaurants, and souvenir stores for tourists. It is accessible from Caracas or Ciudad Bolívar. There are many planes operating regular and commercial flights. Tickets range from $110 to $350. Upon arrival, you will need to pay a certain amount to visit the National Park and provide a certificate of yellow fever vaccination.

It is recommended that you visit the falls from spring to fall, as Angel is spectacularly full at this time. The only obstacle may be cloudy weather – during this period, it is almost impossible to see the attraction. In winter, the waterfall is not as lively, but there is a chance to get a good look at it. 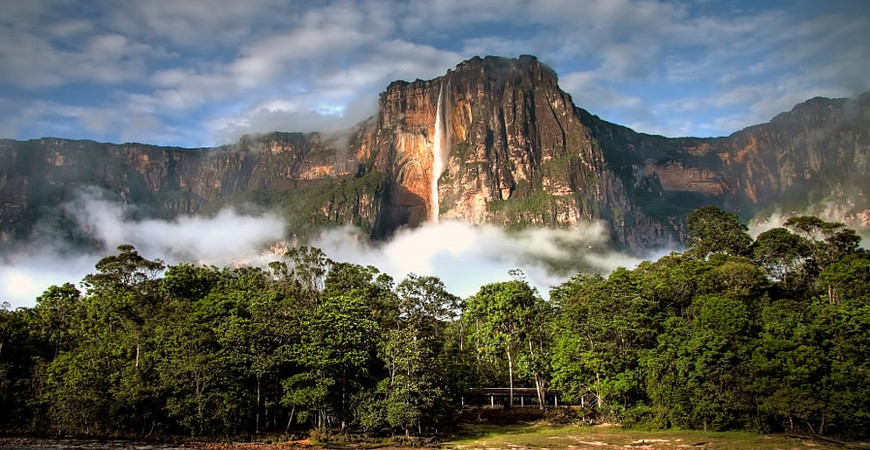 Angel Falls in Venezuela is an outstanding experience that you should definitely plan for if you are going to visit this colorful South American republic. Angel is part of Venezuela’s largest reserve, Canaima. The national park covers a huge area that’s almost unimaginable – 3 million hectares! Territorially it is located in the northern part of South America, on the Guinea Plateau, which is famous for its jungle.

The water of Angel does not fall down in a continuous stream: without any obstacles it travels 807 meters, collides with a barrier, and collapses with another small stream of 172 meters.

The height of the falling water in Ángel according to official data is 979 meters, but some researchers claim that in fact the waterfall is even higher – at least 1,054 meters.

This may well be true – as we study the waterfall, the data about it are constantly being verified. For example, it is now known for certain that the width of the stream in Angeles is 107 meters, although relatively recently it was thought that the waterfall was significantly smaller, no more than 50 meters.

Surprisingly, if you ask many people about a high and powerful waterfall, involuntarily comes to mind the famous Niagara Falls. Angel is almost 20 times higher than Niagara!

The top of the cliff, from which the stream of Angel Falls rushes down, is often shrouded in fog – a natural effect. Moreover, this fog and dampness can be felt even far enough from the waterfall.

The power of the waterfall depends on the time of year. During the rainy season (which usually falls between May and November) the amount of water that the falls passes through is absolutely titanic – every second (!) It is about 300,000 liters of water. When the rains go away, the volume of water in Ángel decreases: most often the stream splits in two, sometimes turning into a small stream at all. If you find yourself in this region during such periods of drought, you are sure to catch a small pond that forms at the foot of the waterfall – at such times you can swim here.

However, it is very clear why Angel is much less developed by tourists than Niagara Falls and a number of others. It can be said that it is one of the most difficult tourist destinations in the world. There are no roads, no hotels, no guides and no crowds of tourists around it. On the other hand, this is what has helped preserve the pristine nature and the richest wildlife here. Until today it is still easy to come across porcupines, deer, sloths, anteaters, monkeys, jaguars, etc.

The huge waterfall was first talked about in 1910. Ernesto Sanchez La Cruz, an explorer of the Venezuelan tropics and traveler, told about it then. He was the first to discover the falls and wrote about it.

But the news remained for the most part in the narrow circles of specialists, until in 1937 there made an emergency landing of James Angel. Four years earlier he had flown over the falls to look for ore deposits. This time something went wrong. Angel planned to land on top of Angel but failed. The damaged plane had to be left there and he had to make his own way to people and help. It took the pilot more than 11 days, made the newspapers and made not only him famous, but also the unruly waterfall. It was immediately dubbed Salto Ángel (Angel Falls), which is how the pilot’s last name (James Crawford Angel) was read in Spanish.

Eigel’s plane remained at the top of the Falls for more than 30 years – only in the 70s it was removed and made part of the museum exhibition of the Venezuelan airport Ciudad Bolívar. The pilot willed after his death to scatter his ashes at Angel Falls, which was done in 1956.

The waterfall is a UNESCO World Heritage Site since 1994.

How to get to Angel Falls

In order to get to Angel, you need a great desire and certain resources – the trip will not be cheap. It is not possible to come here with a tour, booking a tour or renting a car.

Part of the journey is more or less clear: There are commercial flights to Canaima National Park from five cities in Venezuela (these are Caracas, Porlamar, Santa Elena, Puerto Ordas and Ciudad Bolívar). Flights take off most in the morning to bring passengers back in the evening (as you remember, there is nowhere to stay overnight near the falls). There are also private planes that take off at the request of small groups who want to see the falls. The ticket price for such a flight is on average from $200 per person.

READ
Iguazu Falls - the most powerful waterfall complex in the world

And then there are options. From Canaima, some travelers choose to fly up to Angel in a small plane or helicopter, which actually turns out not to be the best choice. The rock around the waterfall, as we remember, is surrounded by fog, especially in rainy times, and it is quite difficult to see the waterfall in such conditions. Others choose motorized canoes for this purpose. In the experience of those who have been here, this is the best option. It is a longer adventure – the road to the waterfall takes at least five hours, and some tours last even up to several days, depending on the wishes of the group.