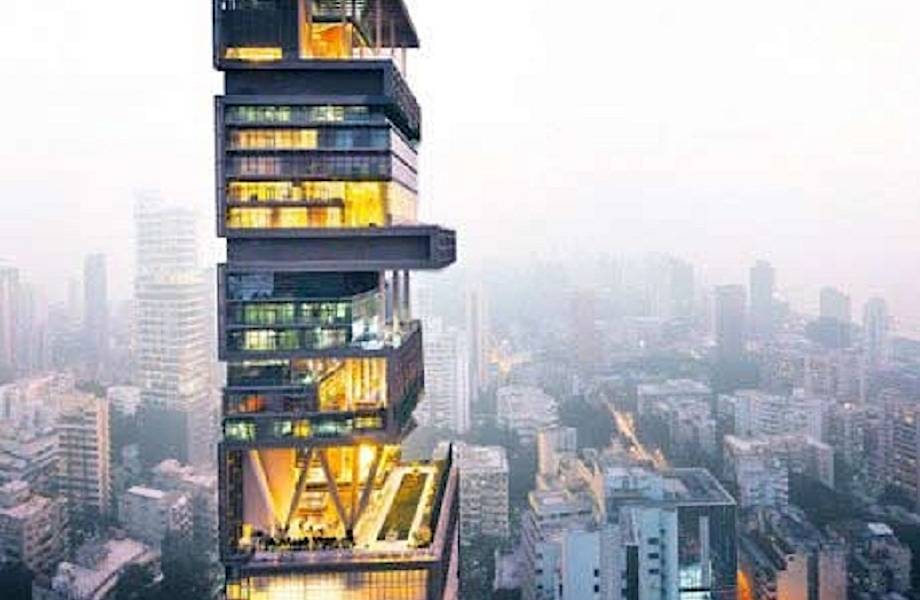 There are skyscrapers in every city. There are even buildings that contain only residential apartments (for example, in New York, we told you about it once). And there are skyscrapers that house hotels. But that’s not the limit. Apparently, that’s what the Indian billionaire decided and built himself a cottage in the form of a skyscraper! The biggest one, of course. And the most expensive. And TravelAsk will tell about it in detail.

The tallest private house in the world is located in Mumbai. It is a 27-storey skyscraper Antilia. It belongs to a 59-year-old Indian billionaire, one of the richest men in the world, Mukesh Ambani. 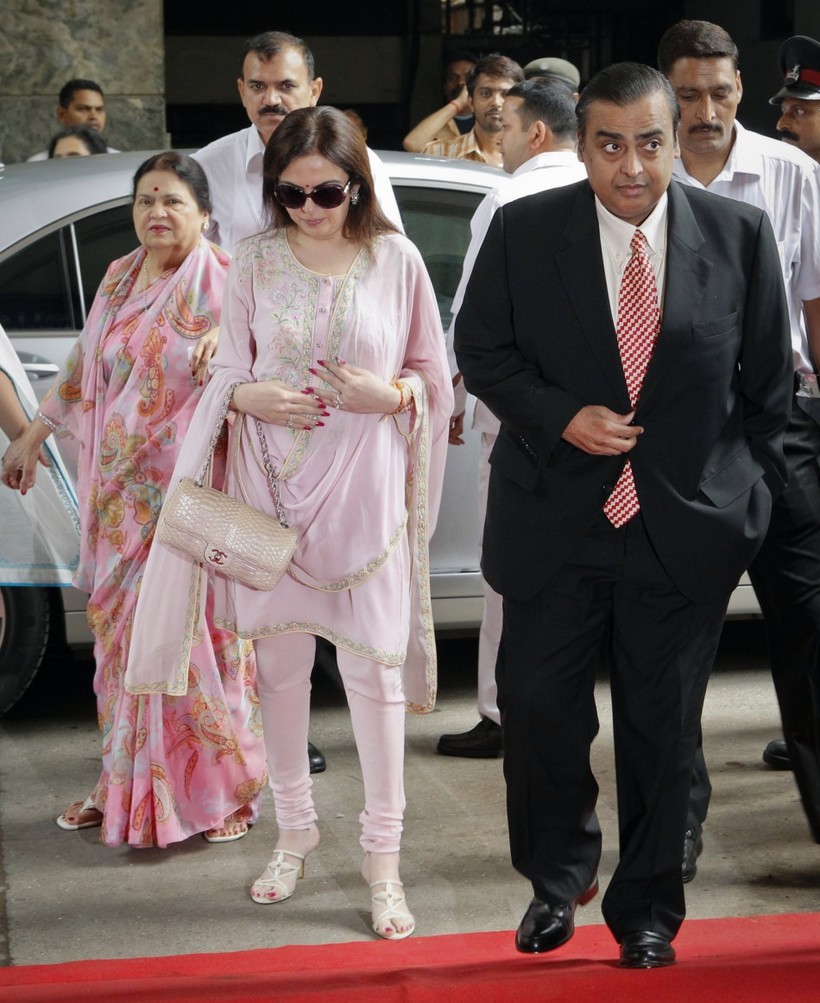 The height of this mansion-cottage is 173 meters. By comparison, the Foreign Ministry building in Moscow, along with the spire, is one meter lower.

Moreover, the 27 floors are a convention. Some of them are separated by a large space, i.e. the total height of the tower allows 60 floors. 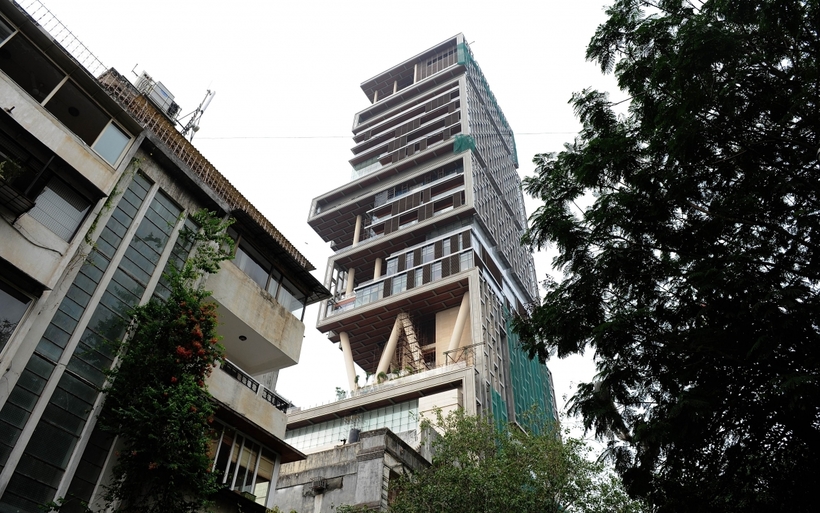 The mansion has everything: a garage for 168 cars, a private car service, hanging gardens, a gym, a small theater, a swimming pool, a ballroom, and three helipads. And all this in one house. The mansion cost Ambani about $77 million. But on the real estate market, as land values in Mumbai have risen, it is already valued at one billion dollars minimum.

The mansion itself is about 37,000 square meters, making it the largest private residential home in the world. The skyscraper is served by a staff of workers (about 600 people).

The giant cottage was designed by Chicago-based architecture firm Perkins & Will.

The mansion was named after the ghost island Antilia in the Atlantic Ocean. This island was depicted on a map in the 15th century, but it didn’t actually exist. Thus, Columbus planned to make a stopover on it. And some travelers also speculated that this island marked the American continent.

READ
The Kimberlite Pipe, the largest hole on the planet 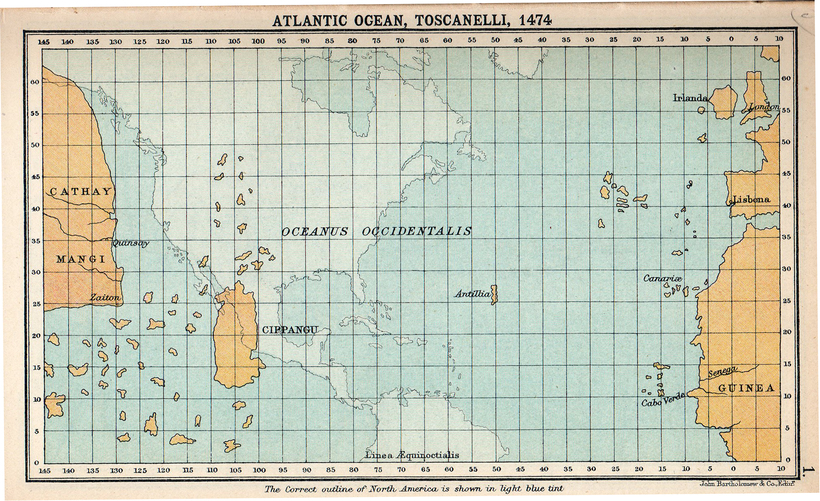 The design of the building is based on the ancient Indian tradition of harmonizing Vastu space, a kind of Indian feng shui. Each of the 27 floors is different in design and finished with different materials.

It is said that Madame Ambani was the main ideological inspirer of this design.

In general, the construction of the mansion outraged many people in India. Moreover, there were even lawsuits in which it was claimed that Ambani had illegally taken possession of the plot. Incidentally, the plot formerly belonged to a Muslim orphanage. A lawyer against Ambani said the city authorities had no right to sell him the land in 2002 and demanded compensation. 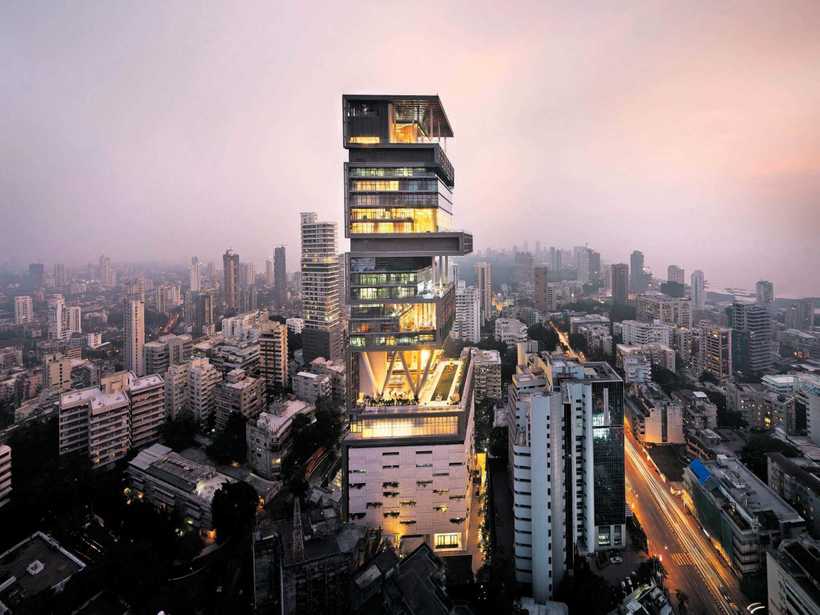 Many believe that such wealth is unthinkable in principle, moreover, it is shameful for Mumbai and the country as a whole, where children go hungry.

And here are some interesting facts about this giant:

Fact #1 . The building is designed to withstand an 8-point earthquake.

Fact #2 . The mansion has nine elevators.

Fact #3 . Parking is on the first six floors.

Fact #4 . The private car service is located on the seventh floor.

Fact #5 . The theater seats 50 people and is located on the eighth floor.

Fact #6 . Then there is the spa, several swimming pools, hanging gardens on three floors and a ballroom.

Fact #7 . Above are the guest suites, and above them is the residence of the Ambani family itself, which includes Mukesh, his mother, wife and three children.

Fact #8 . Above the residence are 3 helipads and a flight control center.

Join our community on telegram, we’re already over 1 million people

READ
The longest bench in the world, where is it located and photos 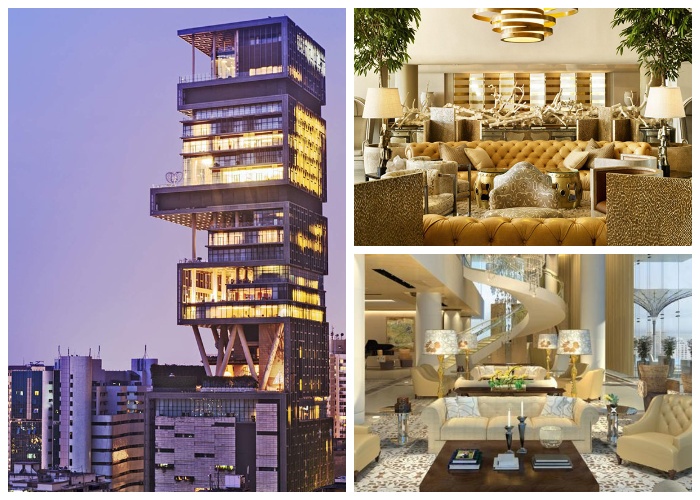 A real skyscraper was built for his family by Mukesh Ambani, India’s wealthiest man. The gigantic building strikes not only the maximum height of 173 meters, but also has a total area a little less than the entire Vatican, not to mention the interior decoration, which, with its luxury and wealth can compete with the residence of British monarchs – Buckingham Palace. 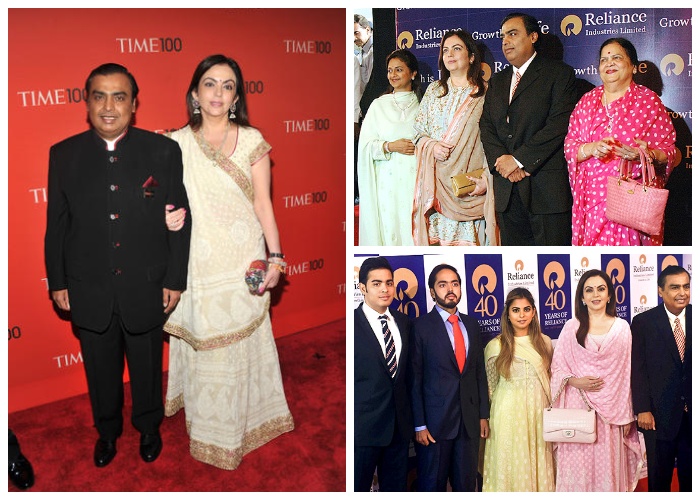 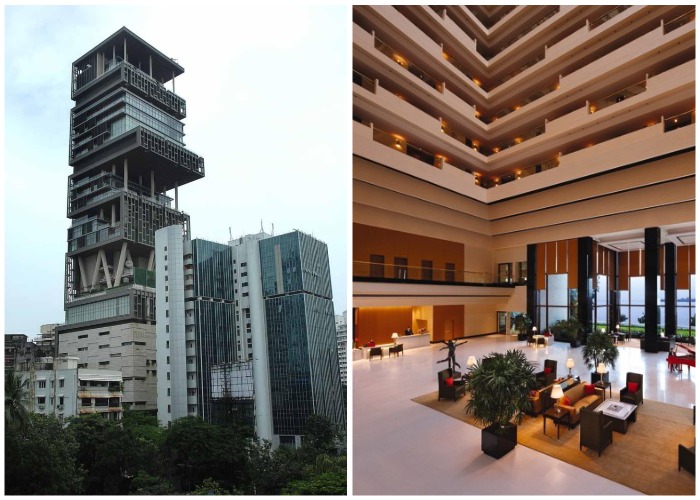 Ironically, it is not the Emirates or China, which tend to create the most, but India can boast of the highest private house in the world. Its owner is the country’s richest man, multibillionaire Mukesh Ambani, who heads the largest petrochemical company Reliance Industries Ltd. According to experts of some well-known publications, in 2-3 years Ambani will become the richest man on the planet. 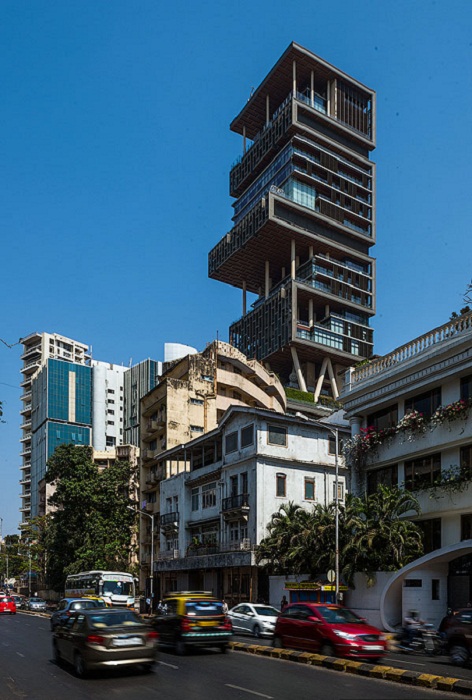 To emphasize the status of a rich man, the billionaire decided to build a skyscraper, instead of the usual apartments, which has caused a wave of outrage and indignation among fellow citizens. After all, the construction of such a grandiose house has once again emphasized how big is the gap between the poor and the rich, about which the authors of Novate.ru repeatedly wrote. 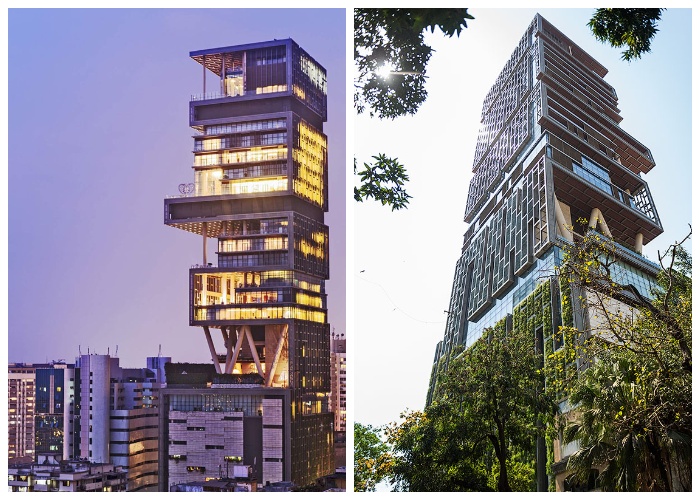 The skyscraper “Antilia” for a very small family of a billionaire was built in the most expensive district of Bombay – Mumbai. The building was designed by the architects Perkins & Will (USA), the construction was done by the company Leighton Holdings and many other major construction and design firms, including decorators. 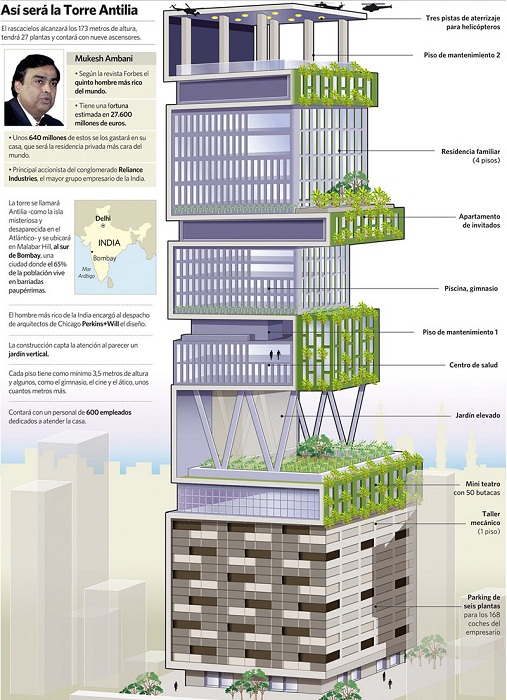 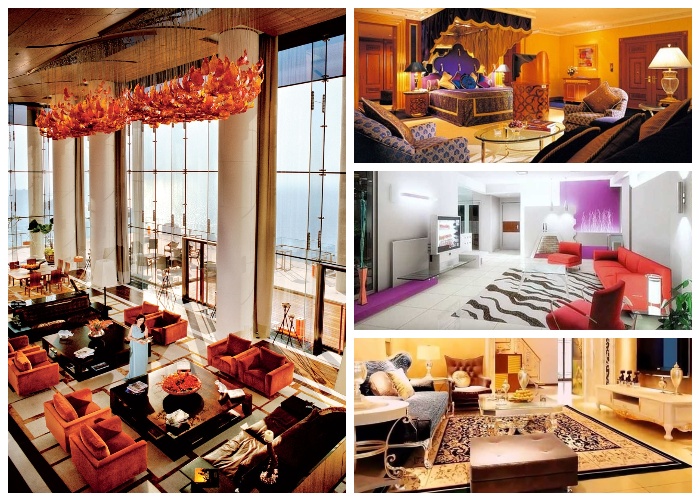 The luxury of the interior decoration can only be compared with the wealth of Buckingham Palace (Antilia, India).

It took seven years and about $1 billion to build this skyscraper. IT IS NO WONDER. And it is no wonder, because this “family house” consists of 27 floors (at standard construction there would be 60!) And has a total area of 0.37 square kilometers, and that’s a little less than the area of the whole Vatican! It is not clear why a family of six such huge apartment, because everyone has more than 6,000 square meters, and for personal use, each received a floor, but the rich have their whims.

READ
Ojos del Salado, the highest volcano in the world 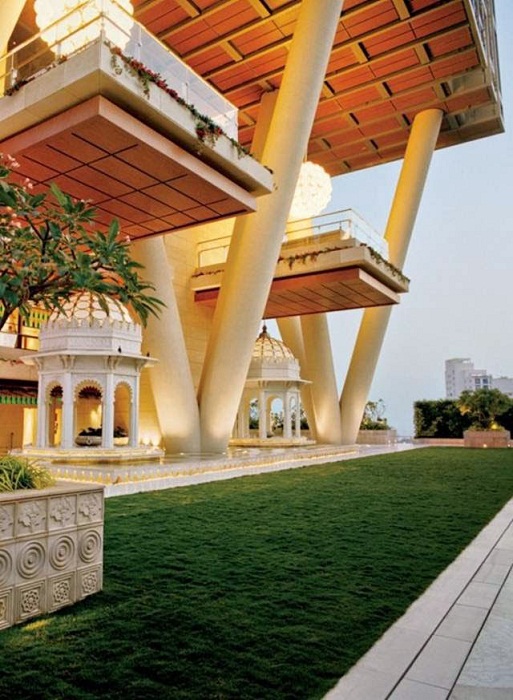 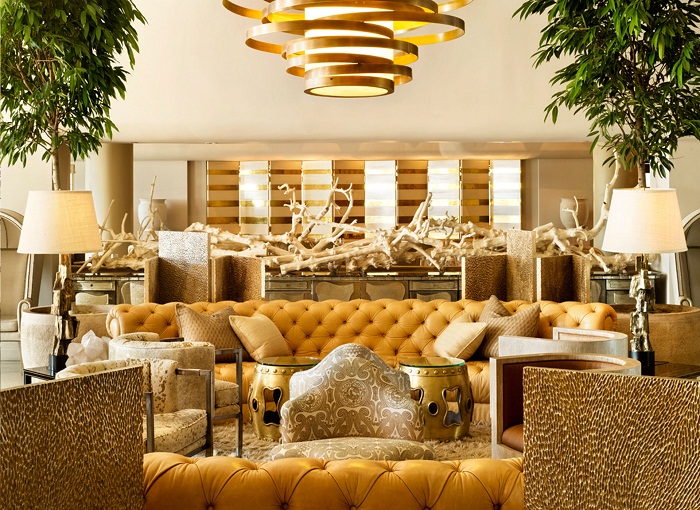 The appearance of such a grandiose construction raises conflicting comments and opinions, but it depends on taste and color. So that the family members do not feel uncomfortable, moving around their personal skyscraper, there were installed 9 elevators, because only the upper floors are residential. Although magnificent staircases decorate the luxurious interior of the giant mansion, it takes too long to ascend or descend them. Each floor of the majestic house fulfills a different function and is decorated accordingly. 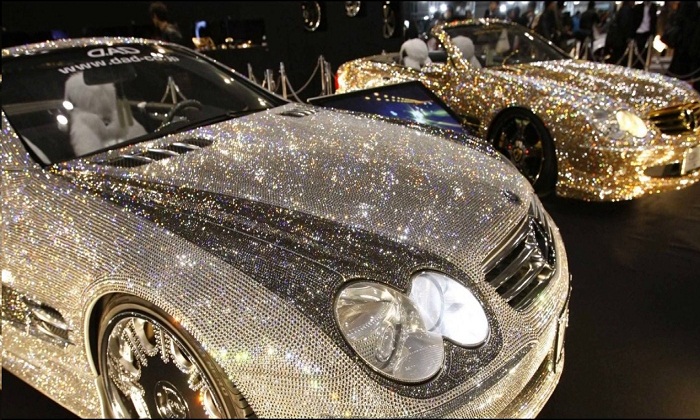 The most resplendent exhibits from the numerous car collection located in the Antilia Skyscraper. (Bombay, India). 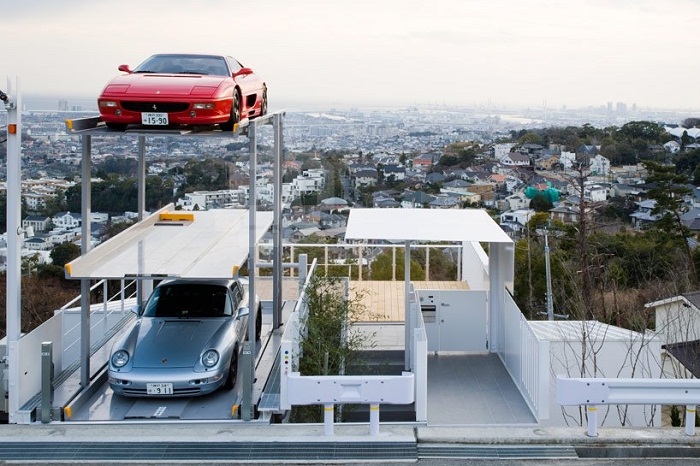 The first six floors are used for . garage, which housed 168 cars, which the head of the family is engaged in collecting. On the seventh floor there is a real car service for the maintenance of such an impressive fleet of cars. 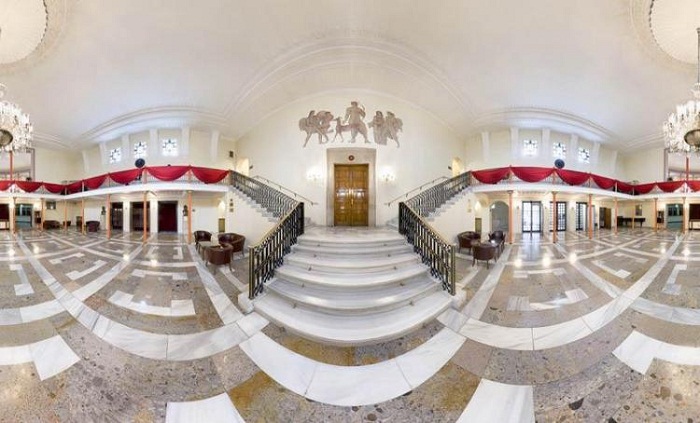 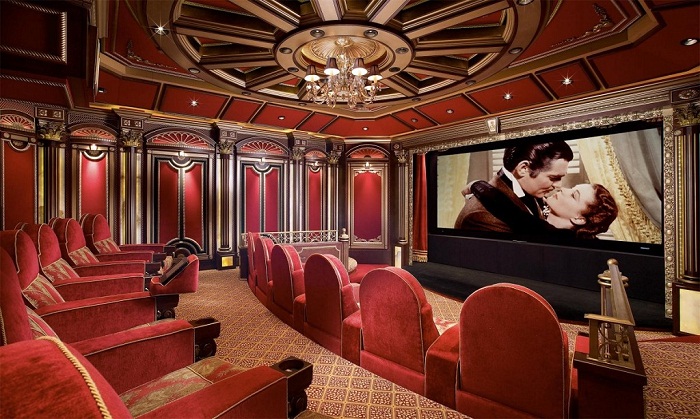 On the eighth floor there is a real theater with two magnificent silver staircases, and the auditorium can easily seat 50 people. 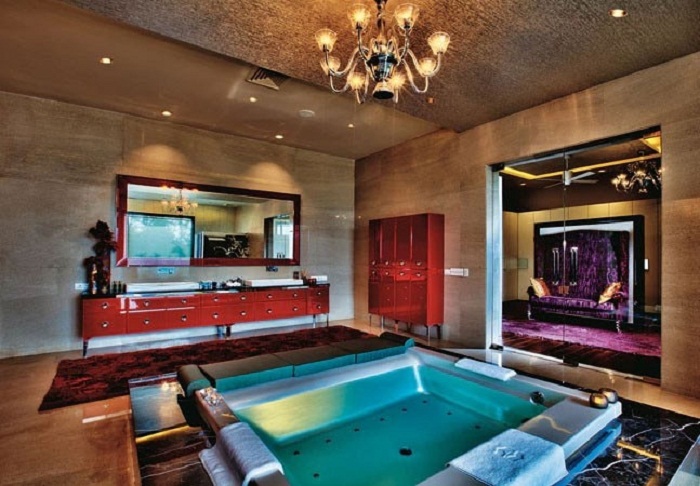 The next floors include a health spa with a beauty parlor, a fitness club and a yoga center, a movie theater and an ice cream parlor. 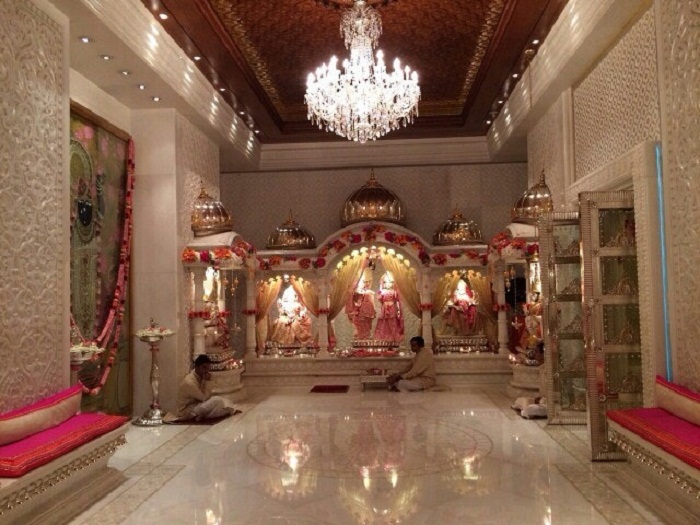 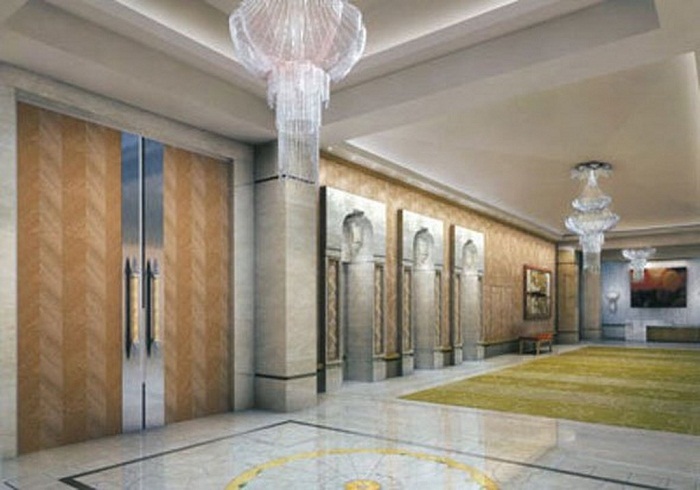 Another floor was given for a dance studio and a ballroom, an ice room with artificial snow and a real temple were created. 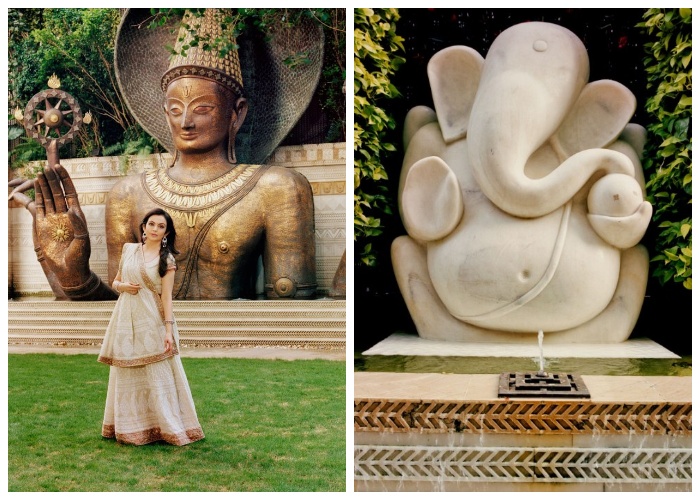 On the three floors were placed hanging gardens and several swimming pools. One floor is a self-contained “panic room” equipped with all the security systems. Another floor is given to accommodate the maids (600 people!), who serve these unusual apartments. 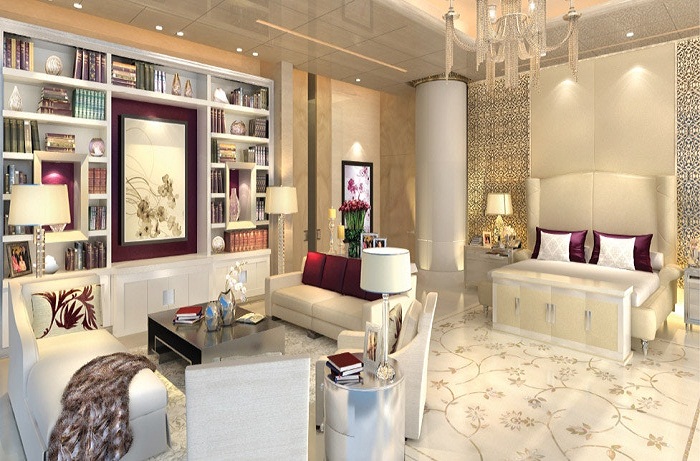 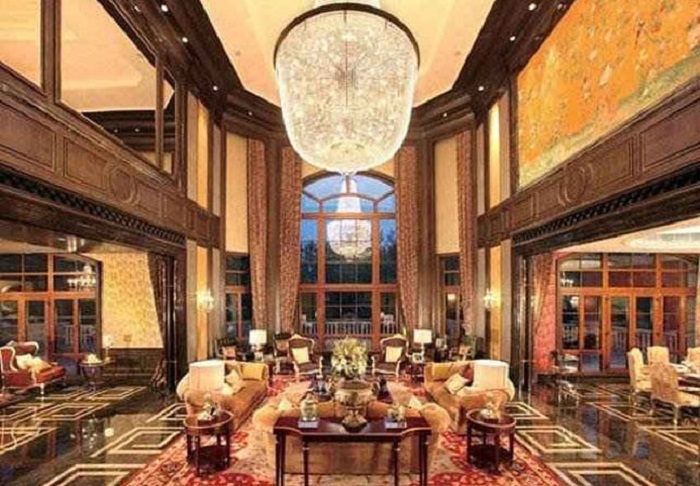 Above that are the luxurious guest apartments, and on the last six floors is the fantastic residence of the Ambani family, with apartments for Mukesh himself, his mother Kokilabin, his wife Nita, his daughter Isha and their two sons Akash and Anant. 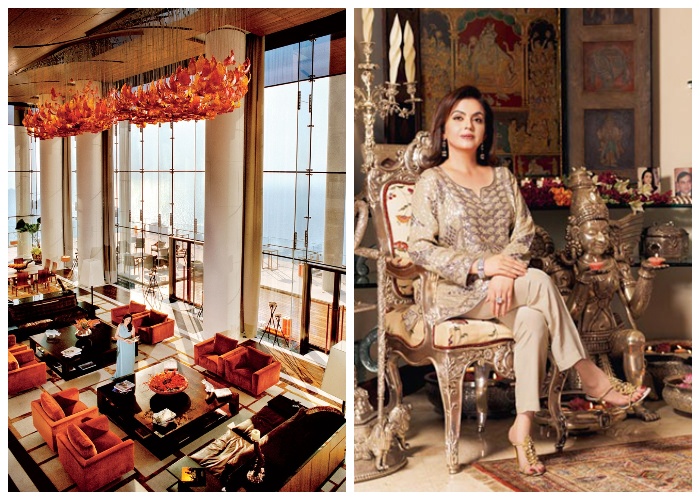 The roof of the skyscraper was also used by placing three helipads and a flight control center. 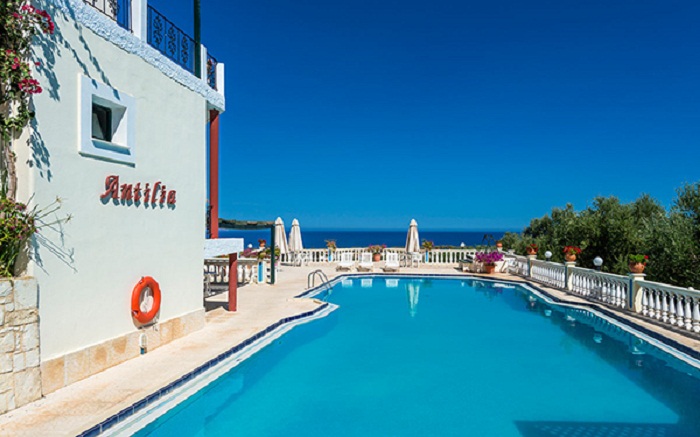 Each floor has balconies and open terraces from which (on the upper floors) there is a magnificent view of the city and the Arabian Sea. 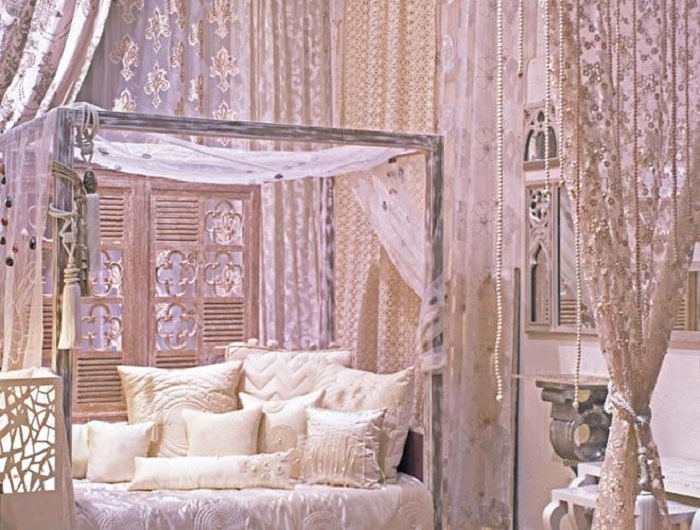 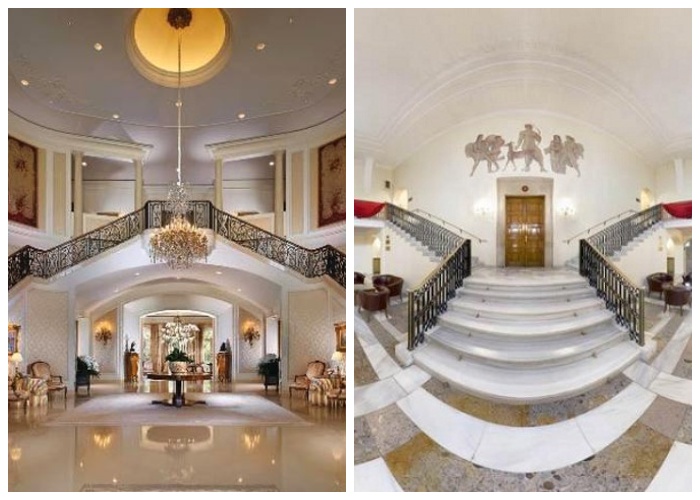 In this gigantic house, every floor, every hall or room has been created from the highest quality materials, the rarest species of natural wood and magnificent marble. And the interior decoration, from furniture fittings to crystal chandeliers and valuable antiques, is meticulously chosen and decorated. 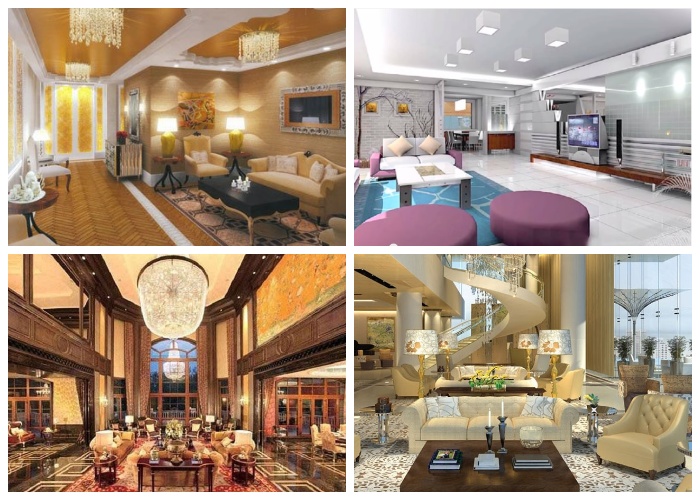 Remarkably, but after the construction was completed, the family Mukesh Ambani a whole year did not move into the house, adhering to the ancient customs, so as not to lose their luck.

As you know, India is the most controversial country in the world. Along with the fact that India is one of the most beautiful and mysterious places on the planet with incredible traditions and rich culture, it is a country of contrasts, where the excessive luxury coexists with illiteracy and poverty. In the following article you will learn about 20 shocking facts you never knew.