Aogashima is an island, a volcano and Japan’s smallest municipality

Japan is a country of mountains and volcanoes. Its population is quite large, about 126 million people, but the area of the country is not enough. That’s why people have to settle there, “where the calf has not asked. You already know about the Japanese volcano Fujiyama and remember that there is a temple at the very top (which, by the way, officially belongs to the volcano itself). In the temple, of course, only monks live there.

But imagine that there is a volcano island, where not monks live, but ordinary people. And the island is relatively far from the “mainland”. The place is unique, although I can not say that very spoiled by the attention of tourists.

So, this is the island of Aogashima. It is located 260 km south of the coast of Japan in the Philippine Sea.

The island is part of the Izu Islands complex, which in turn belong to the Nampo Archipelago. Aogashima is notable both for its appearance and its famous volcano of the same name. In fact, it is the remains of an old stratovolcano, so we can safely call this place a “volcanostrove.

Its appearance is very original. High and impregnable coastline encircles the island around the perimeter. In the center is the mouth of a dormant volcano, overgrown with lush green forest. Aogashima looks very much like a cake or a waffle, which is very difficult to get to from the sea. It would make an excellent outpost for defense against enemy attacks. 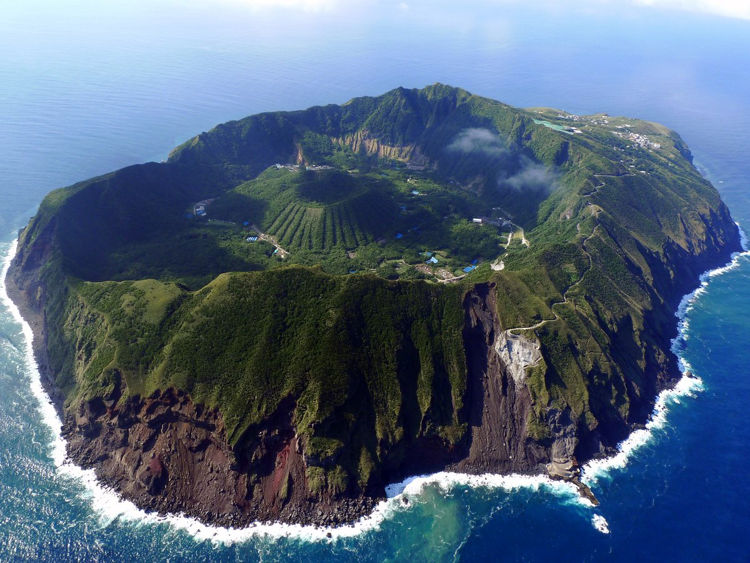 The location of the island has contributed to the mild tropical climate. The water off the coast is very warm and the air is humid, which is quite natural for these latitudes.

The size of the island is modest and comparable to the “billionaire” island of Laucala.

According to scientists, volcanic activity began here more than 3,000 years ago. The last eruptions in 1780-85 resulted in a landscape with two cones in a volcanic caldera. They have survived to this day.

Incidentally, in April 1783, an eruption killed seven people and wiped out 61 houses. But this did not calm Aogashima, and exactly two years later, in 1785 (again in April) a new eruption has caused the death of 140 people. People were forced to leave these places for 50 years. Then they, however, returned, and their descendants still live here. At the moment, there are just over 200 locals on the island. Guess what the only village on the island is called? That’s right – Aogashima. The Japanese did not make anything up, and called everything by the same name.

As we have said, it is almost impossible to get to the island from the sea. For communication with the outside world by sea, there is a small pier, capable of receiving ships of up to 500 tons displacement, and only under favorable conditions – the area around the pier is quite strong current. 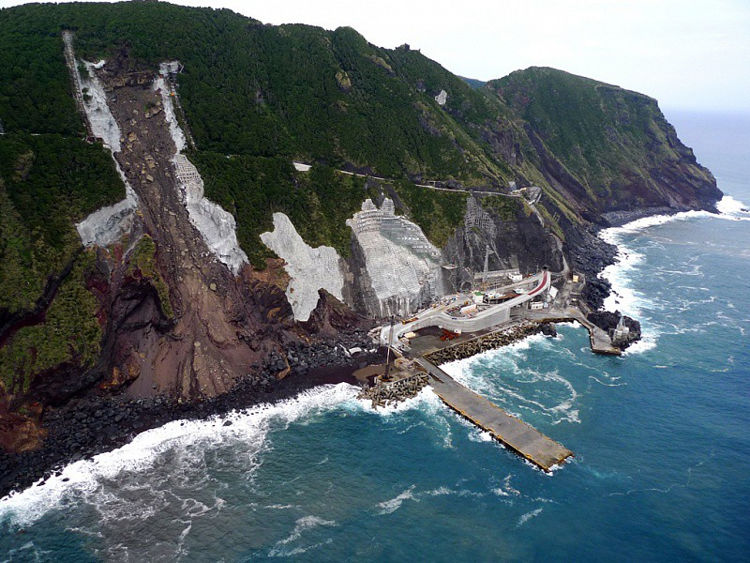 The best way to get to the island is by helicopter. There is an airstrip on the island for this type of transport. The locals are engaged in fishing and agriculture. Many extract sea salt by evaporating water with volcanic heat. This is one of the few trades on the island.

Although there are no hotels or cafes on the island, travelers still visit it. It will be especially interesting for divers and fans of underwater hunting. And those tourists who want to be in silence and solitude. Excellent views can be seen from the top of Otunbu.

In addition to the serenity and quiet, guests are offered a geothermal bath, located in the center of the island. You can also try dinner cooked directly on the natural volcanic heat. 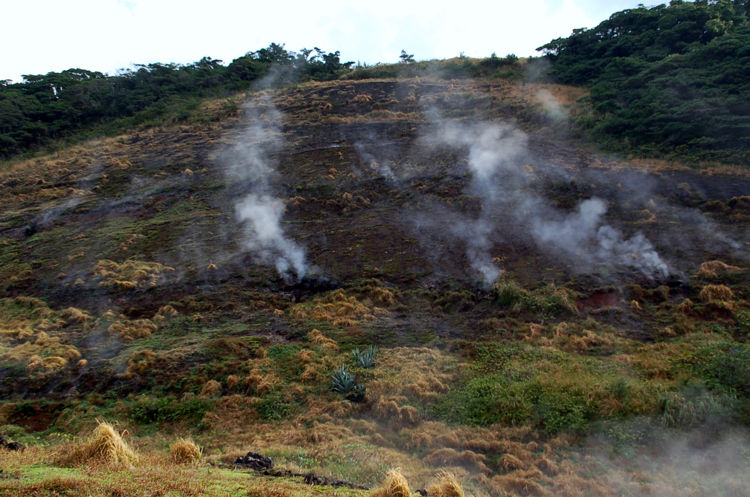 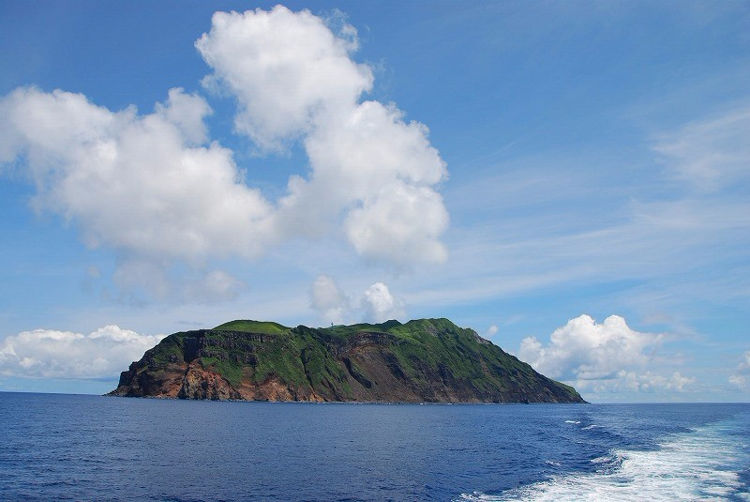 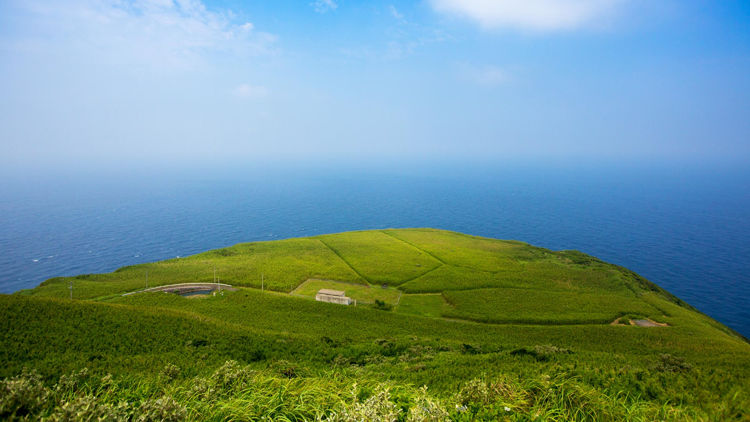 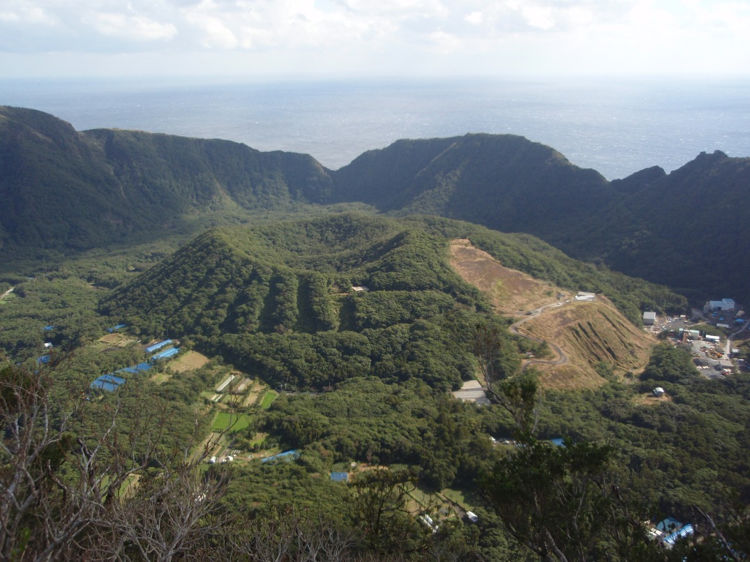 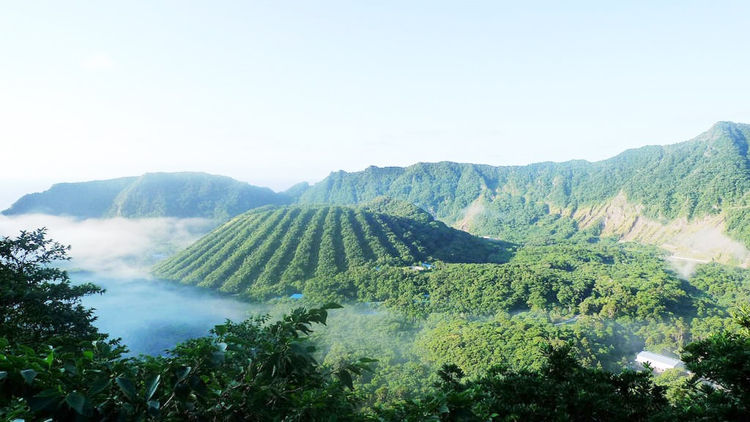 Fog in the crater of Aogashima Island

Aogashima is a volcanic island where people live, Japan

Aogashima is a volcanic island in the Sea of Philippines, a part of Tokyo Prefecture, Japan. It is the southernmost and most isolated inhabited island of the Itsu archipelago. The island is home to the eponymous village of Aogashima, which is the least populated municipality in the country.

The climate of the volcanic island of Aogashima is warm and mild, a subtropical paradise with a moderate humid climate and the warm waters of the Kuroshio Current. The island was formed by the eruptions of at least four volcanoes, but how long people have lived here is not known. The settlement is surrounded by many cliffs of volcanic magma.

Local residents, live here, risking at any moment to be under the deadly lava – the volcano is active! But even without major “pranks” of the volcano, from time to time some of the islanders die (hot water near the coast, emissions of steam, lava …) Nevertheless, people are not going to change their home for something else. The total population of the island, about 210 people.

Even the remoteness of the island of Aogashima (Aogashima), does not prevent the pilgrimage of tourists. Many want to visit next to a functioning volcano. Climbing to the top of Otunbu, you can admire the view of the sea.

But walking around the island and taking pictures of the craters is not the only thing to spend time on. In the central part of the island is a geothermal sauna. You sit there, take a steam, and think about the temperature of the volcano itself. Also, you will be offered to cook yourself dinner in the volcanic heat.

The volcano on the island of Aogashima is a Category C active volcano (according to the Japan Meteorological Agency). The last eruption was around 1781-1785.