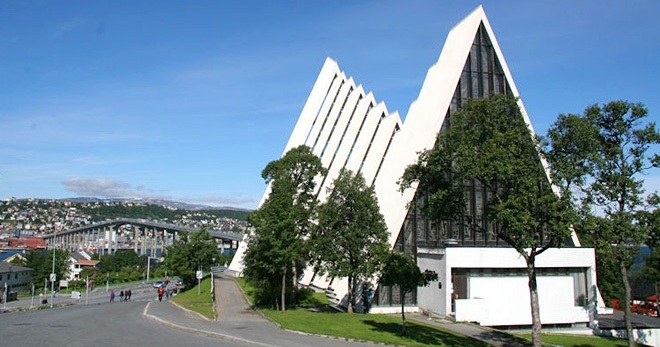 Arctic Cathedral is one of the sights in Tromsø, Norway, reminding tourists that they travel in a northern country where freezing cold is a frequent phenomenon. Because of its outward resemblance to the Sydney Opera House, the Arctic Cathedral has been given its humorous name, Opera Norway. The temple is active and invites visitors to concerts.

The majestic snow-white Arctic Cathedral is located in the Norwegian city of Tromsø and is officially a Lutheran parish church. Its geographical location allows you to enjoy the unusual architecture and watch the Northern Lights at the same time. 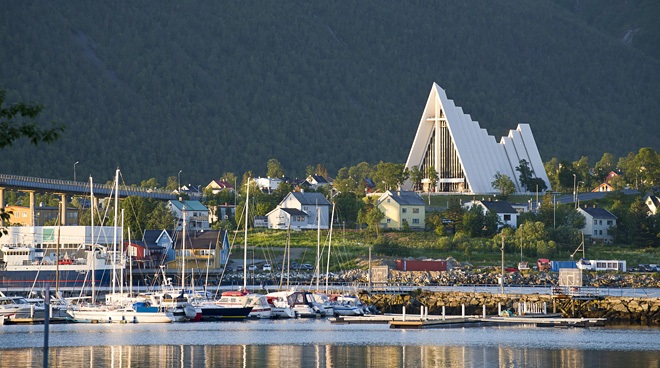 History of the Cathedral

In the mid-1950s, a council in Tromsdalen decided that a parish church of the city should be built. Seven years later, the plan by the architect Jan Inve Hovig was adopted, which was implemented a few years later with minor revisions. Work on the church continued from April 1, 1964 until the end of 1965. On December 19, Bishop Monrad Nordeval consecrated the Arctic Cathedral. Since then, the temple is visited by both parishioners of Tromsø and many tourists from different countries who want to admire the amazing architecture of the cathedral. 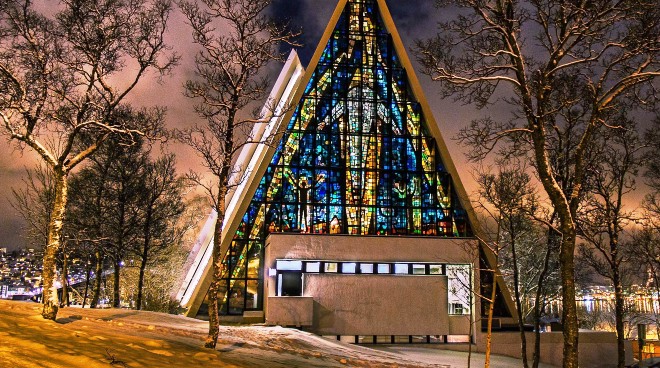 What is interesting about the Cathedral?

In the design of the Arctic Cathedral in Tromsø there are features of the Gothic style. The building is made in the form of two linked and passing each other triangles, reminiscent of a large iceberg, floating in the polar night on the vast expanses under a clear sky. In winter, the temple blends in perfectly with the local landscape, merges with the mountains and looks great during the days of northern lights. But perhaps the most beautiful picture can be seen in the early morning, when the orange rays of the rising sun illuminate the stained glass windows of the temple, giving them a mystical mystery and depth. 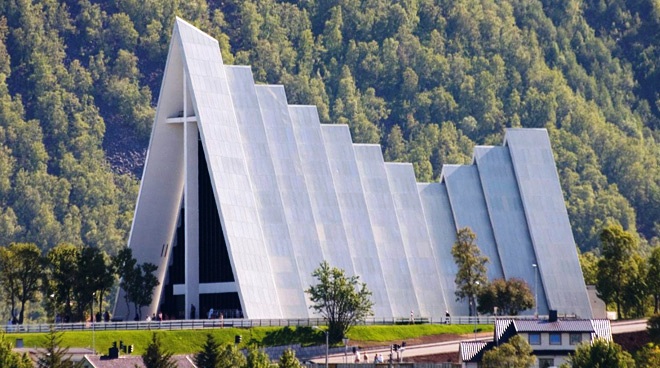 The stained glass windows of this cathedral are recognized as the largest in Europe (the largest of them covers an area of 140 square meters, 23 meters in height). For their manufacture was used about 11 tons of glass. The main stained-glass window in the chancel was made by master Victor Sparre in 1972. The hand of God is depicted with three rays of light on the figures of Jesus Christ and the two apostles departing from it. The main theme in the cathedral’s stained glass windows is “The Coming of Christ.” 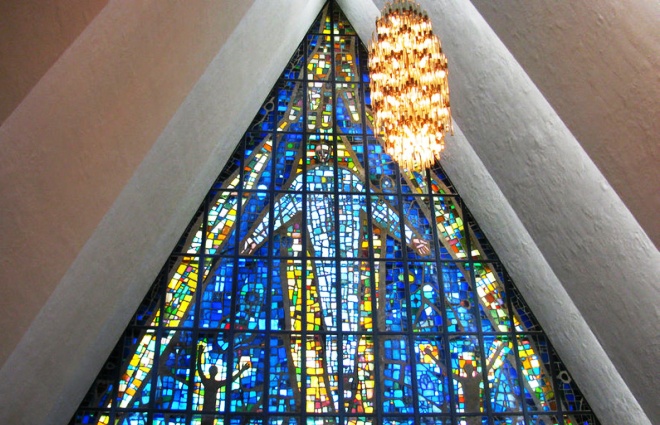 The cathedral is characterized by excellent acoustics. A unique feature is the three-register organ that was built in 2005 in the French Romantic style. It has 2940 pipes and is used for divine services and numerous concerts of organ music in the cathedral. During the summer (May 15 to August 15), the cathedral hosts Midnightsun concerts, starting at 11:30 p.m. and lasting one hour. There are also northern lights concerts. 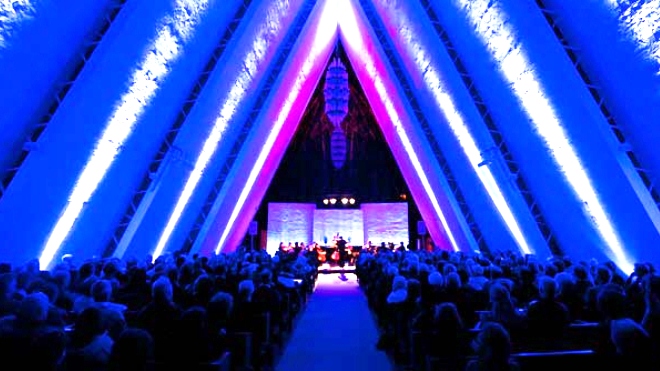 As a memento of your visit to the Arctic Cathedral in Tromsø you can buy postcards, souvenirs, postage stamps sold here.

Mode of operation of the cathedral is as follows:

To visit the Arctic Cathedral, you can take a cab or rent a car. You’ll need to take Route E8, turning onto the graceful Tromsøbrua Bridge, which spans the Balsfjord on your way from mainland Tromsdalen to the island’s city center. The snow-white Arctic Cathedral rises to the right of the highway.

Tromsø is located in Norway. It is the northernmost city in the world and the second largest located above the Arctic Circle. The first one is our Murmansk, but it is situated 200 km to the south. Tromsø is called the “gateway to the Arctic”, because it was the place where the explorers left to discover the North Pole. 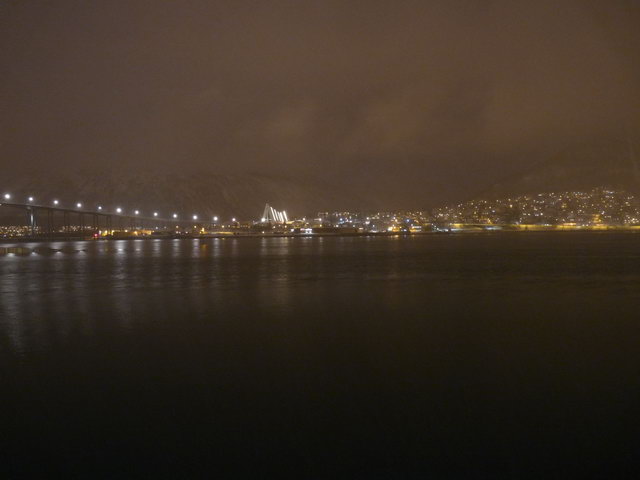 There is a lot to see in Tromsø: from the giant mountains and the northern lights to the creations of human hands. But I’ll tell only about the Arctic Cathedral, which has become one of the symbols of this city, and in general of this harsh region. 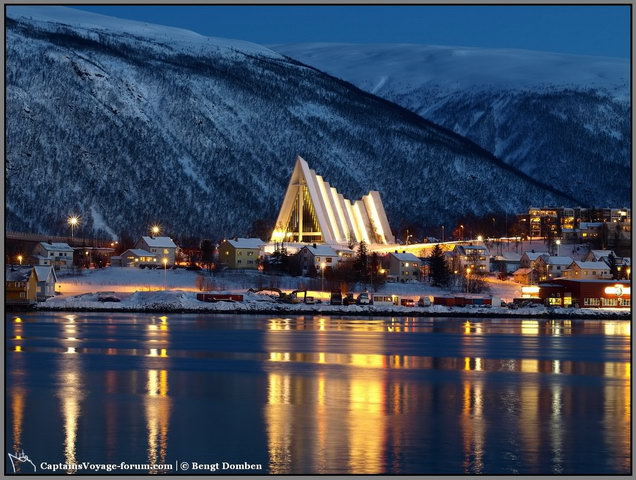 In its purpose this temple is an ordinary parish Lutheran church, which as a result of a successful architectural solution has become one of the main attractions of the city. Arctic Cathedral stands at the foot of the mountain on the fjord opposite the city center, so it is clearly visible from the main promenade. From afar, it looks quite tiny against the background of the majestic mountains, like all the creations of human hands in these parts. 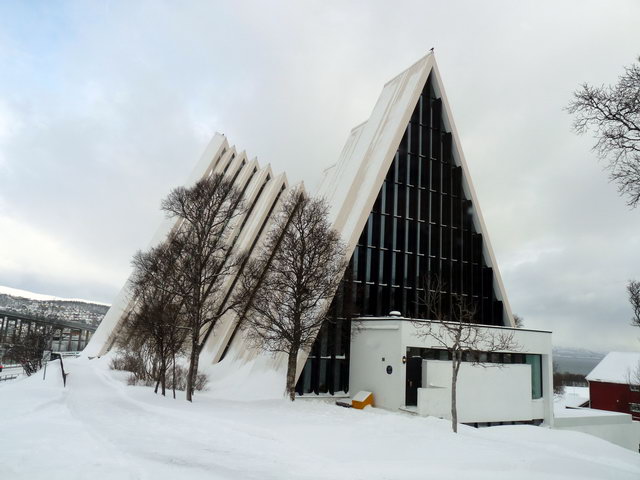 Up close it is quite imposing, but inside it seems even cozy. Its ideological program is easy to read in the triangular vaults, which look like mountains turned inside out, in the overall composition of the long hall, which begins with a bright spot at the entrance and ends with a huge luminous stained-glass window. Of course, this tunnel, too, is inspired by the local features of the landscape, and alludes to human life, whose beginning and end is the light that each person will inevitably behold in due time. This structure does not compete with the landscape, which is impossible here; it harmonizes the supernatural environment, trying it on a human scale. 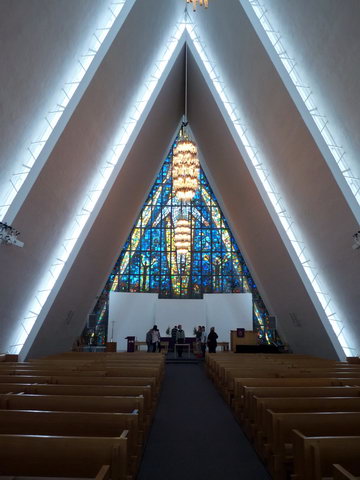 The building was built in 1965 (architect Jan Inge Hovig). The stained glass window was installed later, in 1972. Finding the name of the creator of stained glass windows is usually a difficult task in churches and not always solvable on site: using photographic technique one has to magnify the angles of the glass, peering into the dark outlines in search of the author’s signature, searching through bulletin boards, booklets and books, asking locals. Here everything is simple and respectful of its creators: the architect and the artist are named on a metal plate right on the facade. 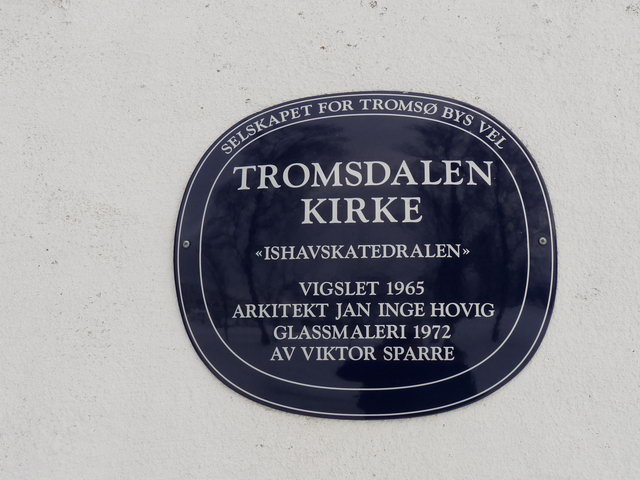 The glass panel covers the entire triangular end wall and is made in the technique of dalle de verre, known in Russian art as the technique of cast (or chipped) stained glass on a concrete bond. 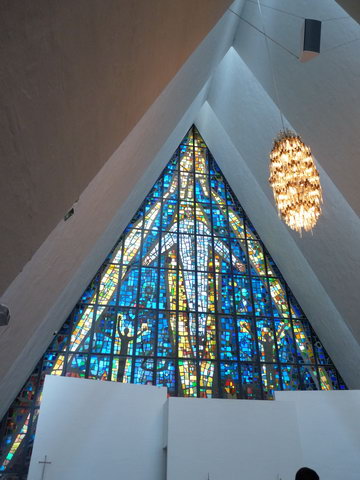 This bright spot is more than appropriate here in Tromsø, where in winter you experience a real hunger for color, where there is literally nothing for the eye to “catch” in the black and white picture of the world. 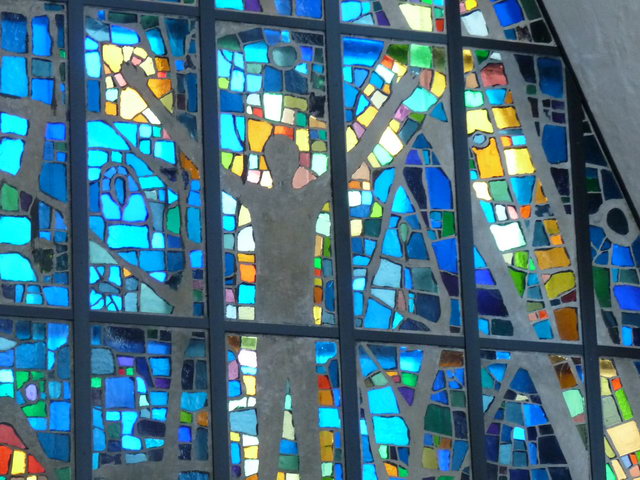 The stained-glass window depicts the hand of God the Father emitting three rays of light on the giant figure of Jesus Christ in the center and the two human figures at the sides. The luminous image of the Son of God rises above the opaque, small, almost childlike human figures. We’ll leave the artistic solution to the conscience of the author, and a detailed analysis of the ideological content to theologians. Stained glass windows are good in themselves, deep rich colors, which is so attractive in cast glass blocks. 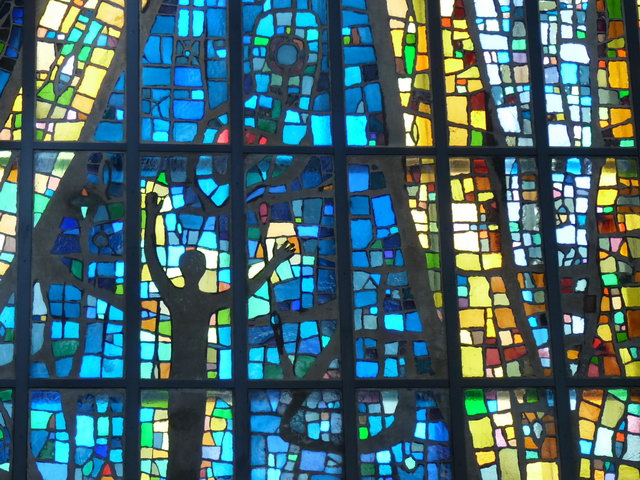 This luminous multicolored window is spectacular both inside and outside the temple, especially with the illumination of the dark night that lasts half a year here. In general, the most northern stained glass windows in the world are made in the spirit of the art of the 1960s-70s in the stained glass technique and style typical of that time. 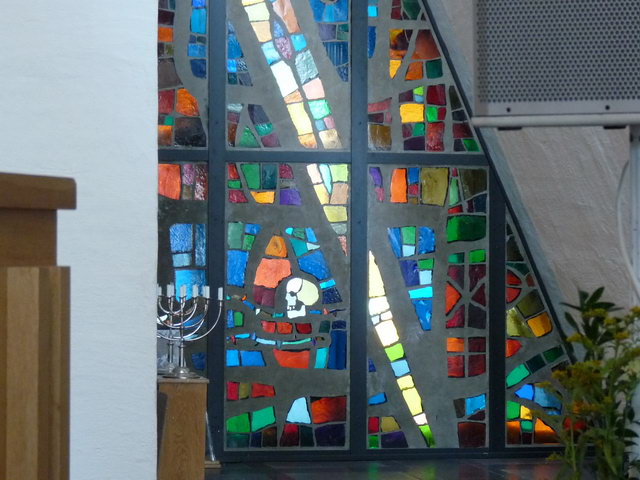 Elsewhere on the planet: in St. Petersburg, Chicago, or Mexico City, tourist guides would have dubbed this stained glass window huge, magnificent, majestic, maybe even grandiose. That’s generally true. But looking at the nature of this region with its completely inhuman scale, the language is not rotten to apply all these solemn epithets to the work of human hands. Especially when the Northern Lights appear in the sky above Tromsø. These “celestial stained glass windows” and mountains give a different scale to any object, even the largest, even if it is the size of a huge wall. Here in Tromsø, all that has been created by humans bears no comparison with the deeds of the force that created our world. 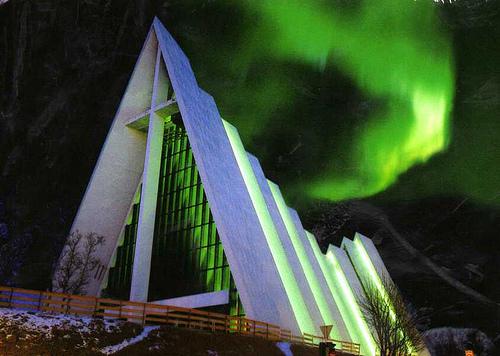