The Arizona crater is the footprint of a giant meteorite. USA

Numerous meteorites have been falling to Earth since long ago. Some of them do not leave any trace, landing smoothly on the surface, such as the famous Goba meteorite in Namibia.

But in the vast majority of cases the fall of a celestial body is accompanied by a crater. One such crater is located in Arizona (USA), 30 kilometers west of the town of Winslow. 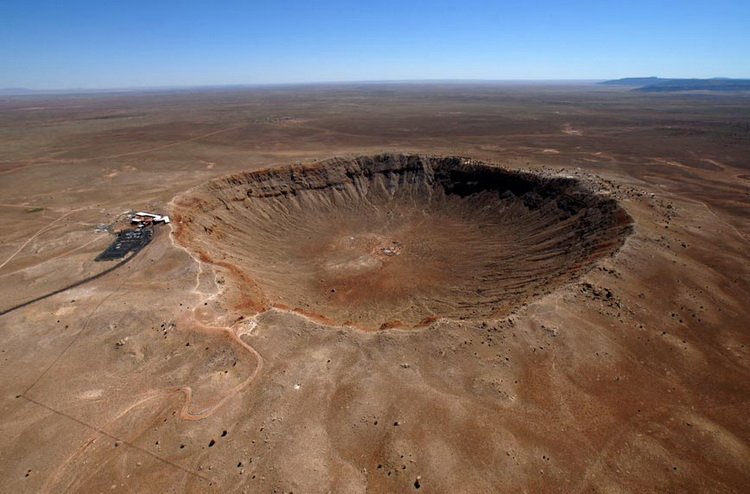 Arizona crater on the map

Arizona’s crater is a classic impact mark from a huge meteorite. It has an almost perfectly round shape with a diameter of about 1200 meters. And its edges rise to a height of 46 meters from the surface.

According to some reports, the crater is 229 meters deep, while according to others it is 174 meters deep. Frankly, we have not been there and, accordingly, we have not measured with rangers or tape measures. Even the Russian and English Wikipedia have different data. It is quite possible that in one case the depth was measured relative to the plain, and in the other case relative to its edges. So the truth is somewhere nearby.

Other names of the crater

There are several known names for this crater.

But, still, it is usually called Arizona Crater.

As well as the famous geological formation in Arizona is simply called the Arizona Wave (and on the maps it is marked as “The Wave”). It is located about 220 kilometers to the north.

When did the meteorite come to Arizona?

Scientists’ estimates about the size of the meteorite itself are mixed. But the data are roughly as follows: The crater was formed about 50,000 years ago by the impact of a meteorite with a diameter of about 50 meters and a mass of 300,000 tons. Its speed was over 40,000 km/h. 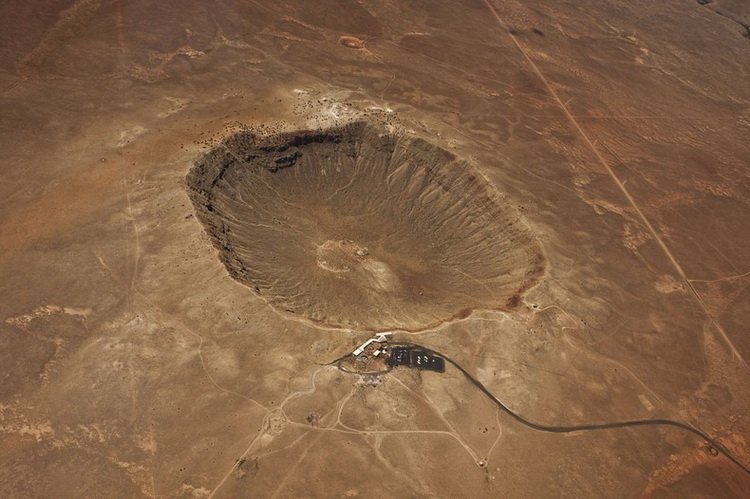 As we said, one of the names of the crater is Berringer Crater, after the man who spent his life proving that it was a meteorite crater and not a volcanic crater, as previously thought.

A little history about the Arizona crater

Such a giant formation, of course, has been known to local Indians since time immemorial. Their legends tell that once upon a time the Fire God himself descended to these places from the heavens on a chariot of fire and left such a huge crater as a memento. This, by the way, indirectly confirms that the crater is really from a meteorite.

The Indians worshipped this place as sacred. They found numerous metal fragments around it, which they used to make amulets. They were believed to protect them from evil forces. The Indians were reverent about these amulets, that even at the burial they used them as one of the main attributes of the ceremony of leaving the deceased in the “Land of the Happy Hunt” (as the Indians called the afterlife).

He is the one who put forward the idea that the crater appeared as a result of the fall of a meteorite. Given the size of the crater and the presence of metal fragments in the vicinity, Berringer suggested that the mass of the meteorite is quite large, and it consists mainly of iron with an admixture of nickel and platinum.

How to sell a meteorite

In those days, 1 ton of iron was worth about $125. Berringer estimates the meteorite could be worth about $1 billion. In 1903, he buys the area where the crater is located and begins excavating.

Daniel spent the rest of his life trying to dig up the meteorite. But, unfortunately, he never reached his goal. Twenty-six years of grueling excavation went in vain. Despite the fact that Berringer was able to dig down to a depth of 419 meters and found around a lot of meteorite fragments, the most important and coveted piece of metal, was not found. Mines and fenced-off excavation sites remain at the bottom of the crater to this day. 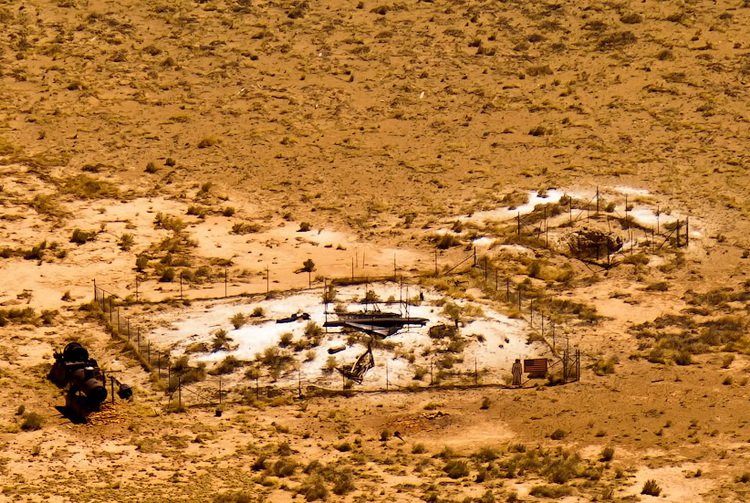 Today, the Arizona Crater is a famous attraction for the state of Arizona in particular, and the entire country in general. Tourists from all over the world come here all the time. Lookout sites are provided for them. 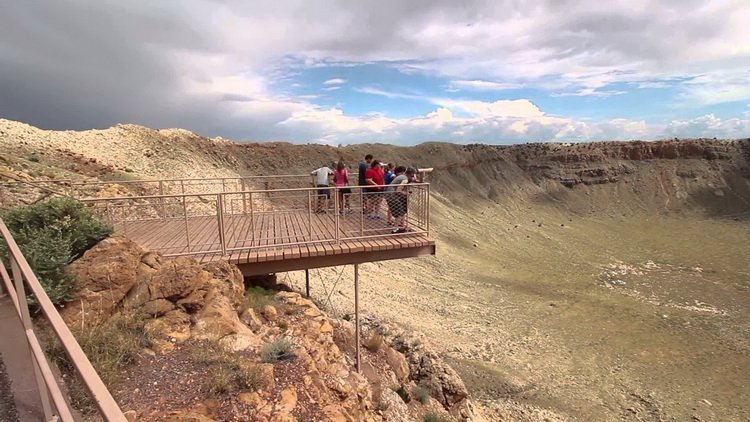 To maintain and increase attention to the crater, locals often talk about the appearance of glow (mysterious, of course) above the crater, periodic UFO sightings and geomagnetic anomalies in the crater itself (of course, all with the adjective “mysterious”).

Some experts in the field of parapsychology and parallel worlds claim that the Arizona Crater is a gateway to hell. It is rumored that people periodically disappear around the crater, and some tourists experience unexplained nervous tension, but there is no reliable information on this matter. 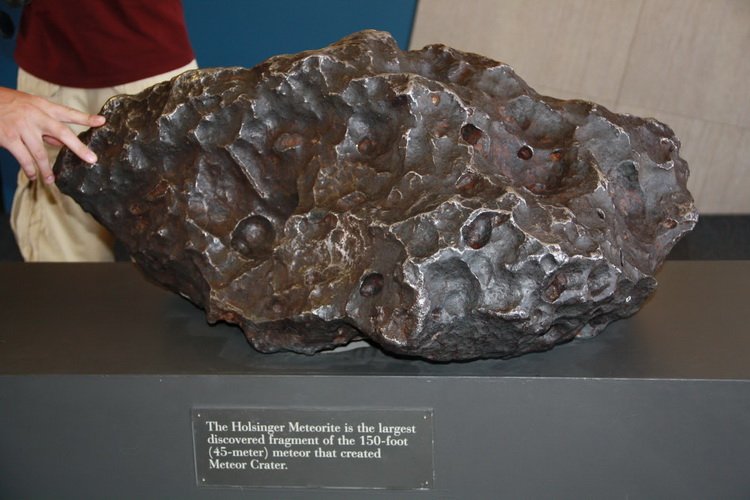 READ
Thor's Well - no one knows what's at the bottom, or if there is one. USA Arizona Crater (Meteor Crater, Barringer Crater, Canyon Diablo Crater) – A large meteorite crater (astroblem) in Arizona (USA), 30 km west of Winslow (Winslow) and 69 km east of Flagstaff (Interstate 40, exit 233). It is a giant earthen bowl 1219 meters in diameter, 229 meters deep, and the edge of the crater rises 46 meters above the plain. This crater because of its good preservation is one of the most famous craters on Earth, it is often filmed in science documentaries, in particular Discovery and BBC.

The crater arose about 50,000 years ago after the fall of a 50-meter meteorite, which weighed 300 thousand tons and flew at a speed of 45-60 thousand kilometers per hour. The explosion from the fall was three times more powerful than the Tunguska meteorite explosion and was similar in power to the explosion of 150 million tons of trinitrotoluene or 8000 atomic bombs, similar to those dropped on Hiroshima. Fragments of meteorite nickel-iron have been found in and around the Arizona crater.

History of discovery and research

The location of the crater has long been known to local Indians, who used meteorite metal shards for their own purposes. The local tribes had a huge number of legends and legends associated with this sacred place. Scientists about the existence of the crater became known only since 1891.

Until the early 20th century, it was thought that the crater was of volcanic origin, and only in 1902, a mining engineer from Philadelphia, Daniel Moreau Barringer, hypothesized that this giant crater was formed by a meteorite impact. He purchased a piece of land where the crater was located and quickly began drilling its bottom, as he was convinced that he would find the meteorite itself. Barringer spent 26 years of his life searching for the meteorite and convincing those around him that his crater was of extraterrestrial – meteorite origin.

READ
Belize. The main sights of the country

The drilling proved futile. Scientists’ estimates, which may have caused Barringer’s fatal heart attack, showed that the meteorite must have evaporated almost completely in the atmosphere when it hit the Earth. Nor did Barringer succeed in unequivocally proving to the scientific community during his lifetime the nature of the crater’s origin.

His services were recognized only thirty years later, when convincing evidence that the crater in Arizona was the result of a meteorite impact was presented by Eugene Shoemaker, one of the world’s greatest experts on comets and meteorites.

Astronaut training in the crater

The Arizona crater was considered to be the place most reminiscent of the lunar landscape on Earth, and it was there, under Shoemaker’s guidance, that all the astronauts who were to go on a mission to the moon underwent part of their training.

Arizona Crater is one of the attractions of the state of Arizona. Many tourists visit it daily. To attract tourists, locals regularly report numerous sightings of glowing air and hovering UFOs above the site, as well as mysterious geomagnetic anomalies inside the crater.

A museum stands at the edge of the crater.

Comparison with other meteorite craters on Earth

The meteorite crater in Arizona, often referred to as the Barringer crater in honor of its first explorer, is by no means the largest on Earth. In Antarctica, a meteorite crater with a diameter of about 500 kilometers was discovered under a kilometer thick layer of ice on Wilkes Land in 1962. In Canada, there is a crater 443 kilometers in diameter on the coast of Hudson Bay. However, unlike the largest ones, whose diameter is measured in hundreds of kilometers, the Arizona crater is the only one that has retained its nearly pristine appearance. According to the museum’s official booklet, “Although there are larger impact marks on Earth, the meteorite origin of this crater was the first to be proven, and it has retained its pristine appearance better than any other.”