The magnificent five-domed Cathedral of the Assumption (1559-1585) was laid by order of tsar Ivan the Terrible in the center of the Lavra, in the place, previously free from the old wooden cells. The tsar and his family were present at the foundation of the church. 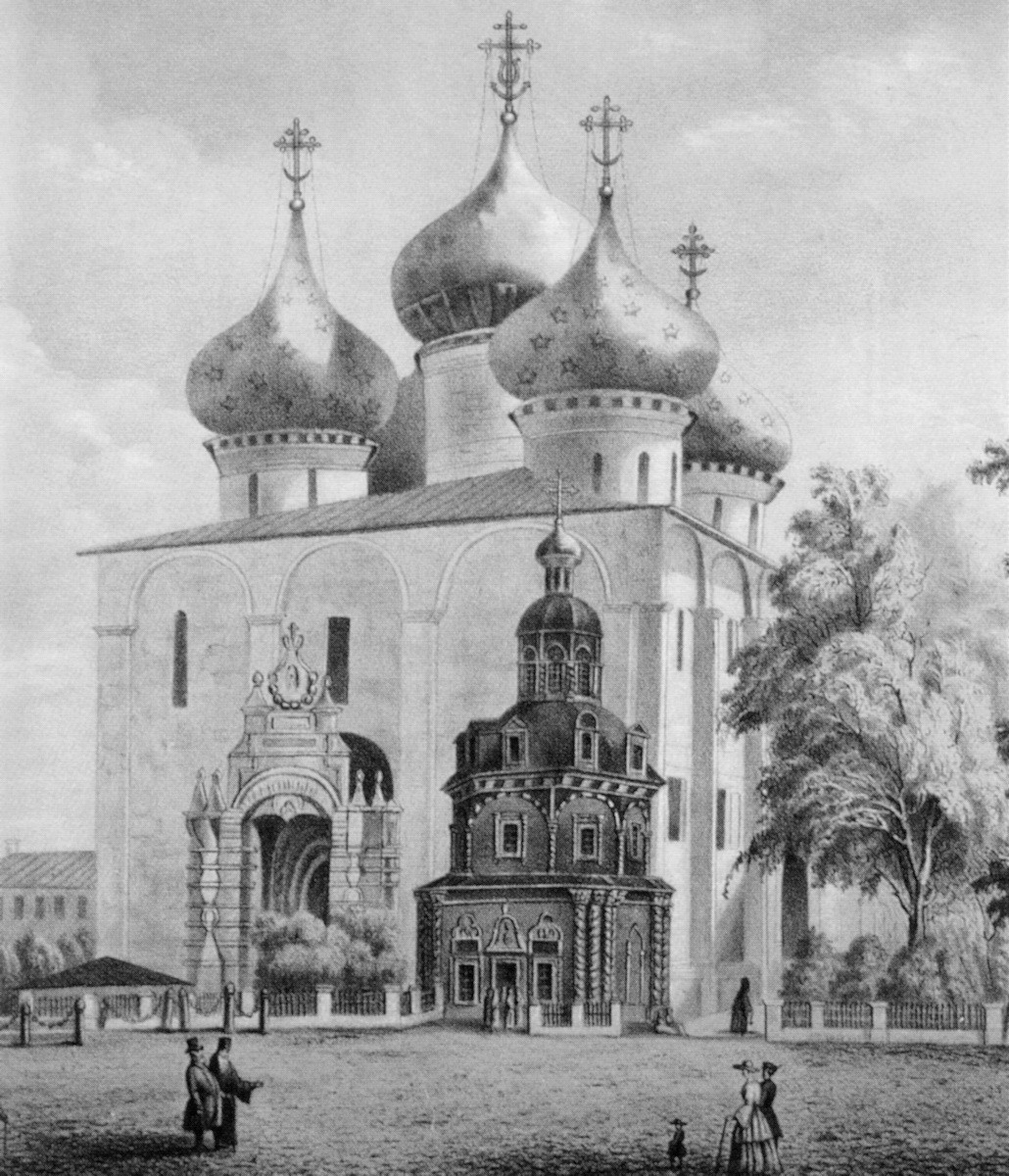 The Cathedral of the Assumption. A fragment of a lithograph of 1860.

Its construction was a continuation of the tradition of the main cathedrals of ancient Russian towns (in Rostov, Suzdal, Vladimir, Moscow) being erected in honor of the Dormition of the Blessed Virgin Mary. The church was consecrated in 1585, after the death of Tsar Ioann Vasilievich, by Metropolitan of Moscow and All Russia Dionysius in the presence of Ivan the Terrible’s son, Tsar Feodor Ioannovich and his wife Irene. The Assumption Cathedral was given state importance. 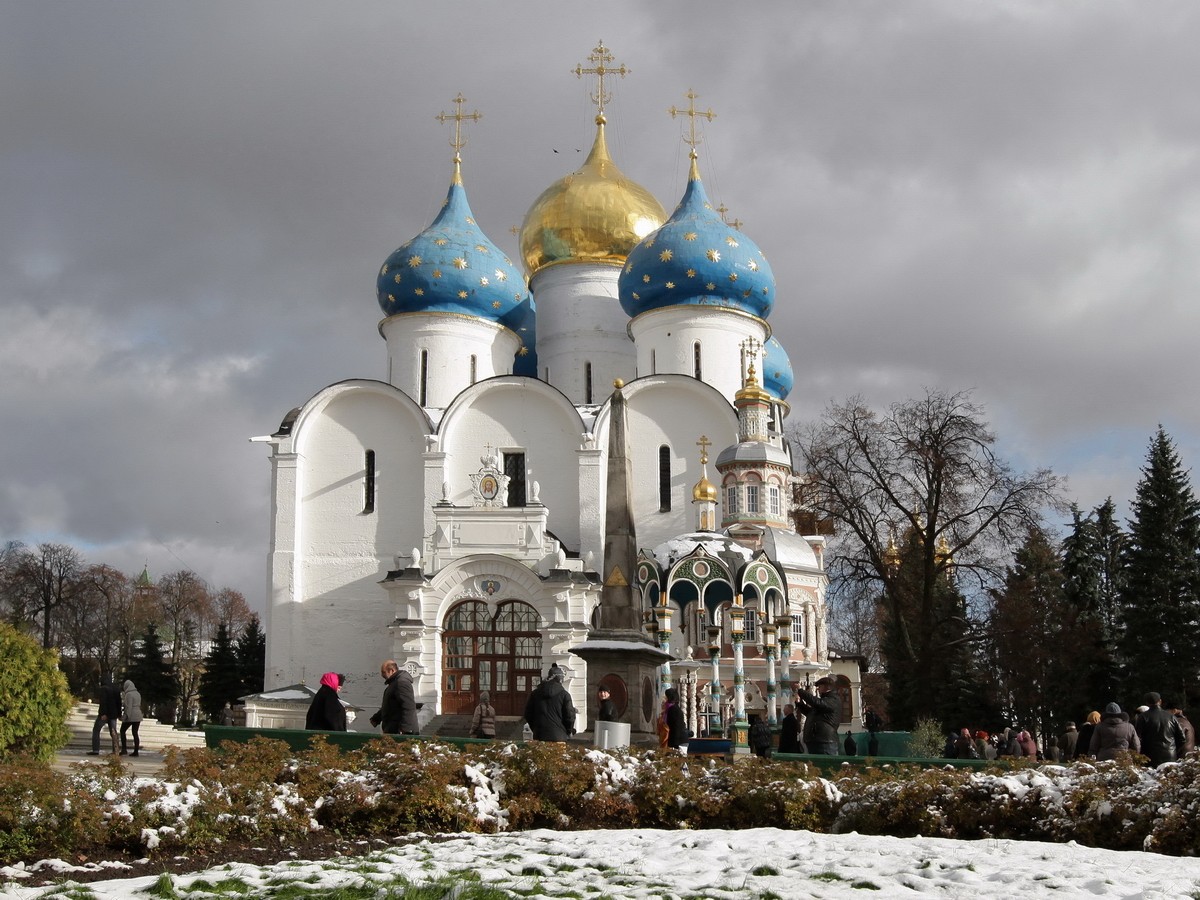 The Assumption Cathedral. View from the western side

As a model for a new cathedral of the main monastery in Russia became the Assumption Cathedral of the Moscow Kremlin. Monastery cathedral repeats the general composition of the five-domed and five-apsed church, exceeding the metropolitan model in size (respectively, 29.2×42,3 m and 27×39,75 m). In contrast to the white-stone Moscow church, the monastery cathedral was built of brick, the thickness of its walls was 2.25 meters. Its cubical volume with not high apses is topped by five closely placed chapels, whose original spherical form was replaced in the XVIII century with an onion-shaped one (at the same time the drum of the central head was added to the height). Powerful blades, supporting semi-circular zakomary, protrude from the plane of the wall by 0.8 m and resemble massive buttresses. The characteristic adornment of smooth walls of the cathedral is the arcature-columnar belt typical to the Vladimir-Suzdal architecture and used again as a decorative device in the construction of the Dormition cathedral of the Moscow Kremlin. 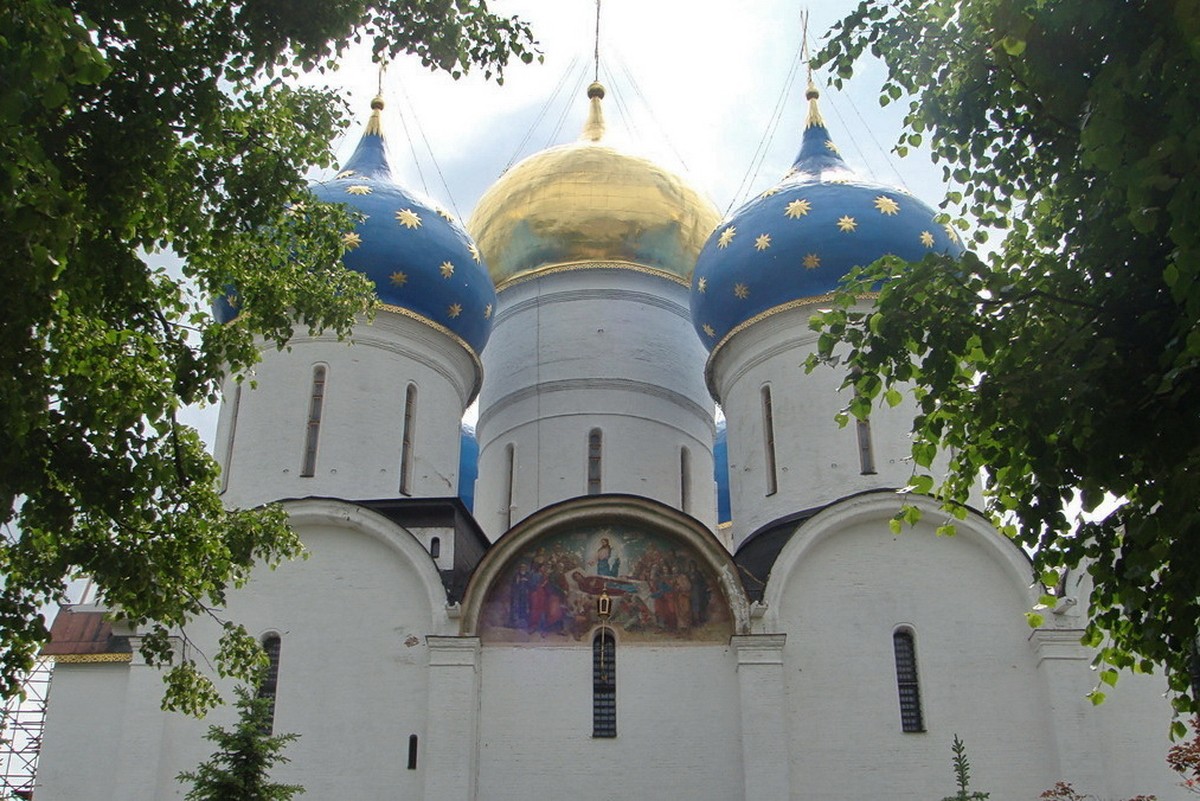 Massive constructions and more simple drawing of details distinguish the monastery cathedral from the capital temple erected by the Italian architect Aristotele Fioravanti. On the west side of the cathedral there was an open porch that was replaced in the XVIII century by a porch (1781), painted on the instructions of Metropolitan Platon (Levshin). 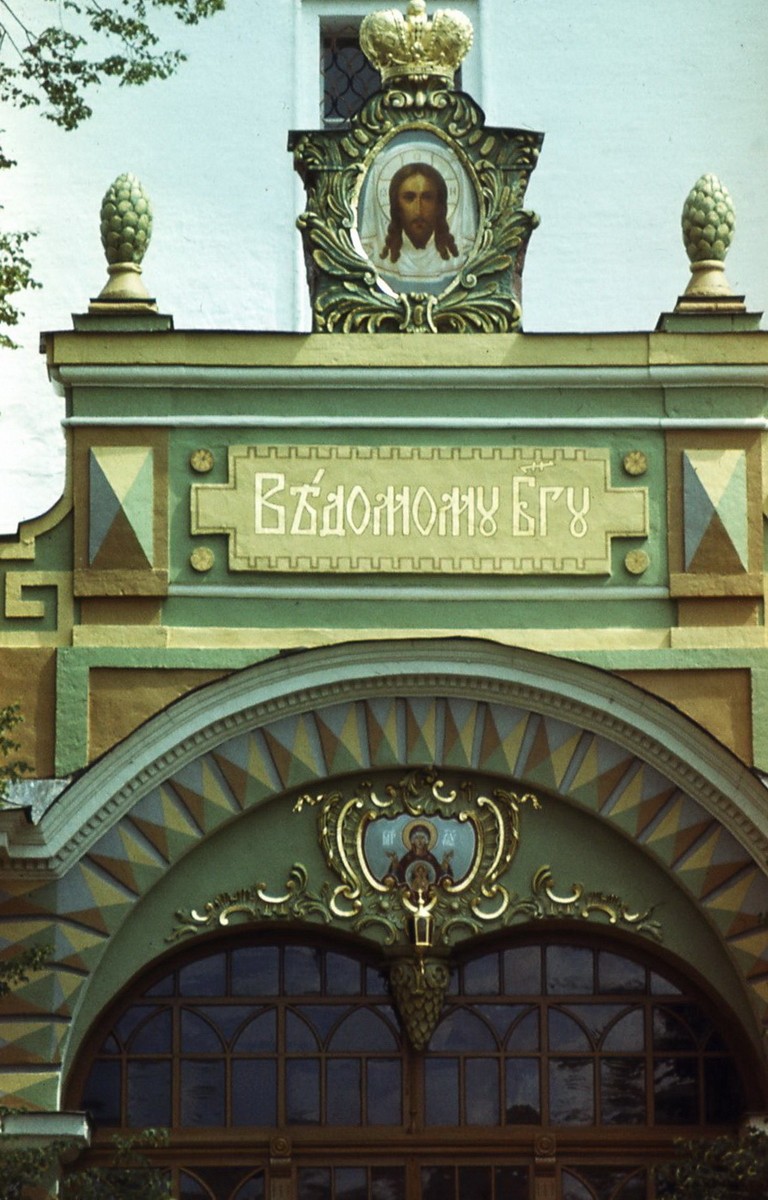 The western porch of the Assumption Cathedral. Photo of the 1980s.

The interior space of the Cathedral of the Assumption is amazing with its majestic size and fullness of light. Six massive pylons of 3×3 m hold high placed cross vaults with five deep drums, window openings of which emit a powerful stream of light. Builders of a monastic temple have not begun to reproduce the form of the cylindrical columns of the Kremlin sample, and have returned to traditional Russian supports – pylons of rectangular section. 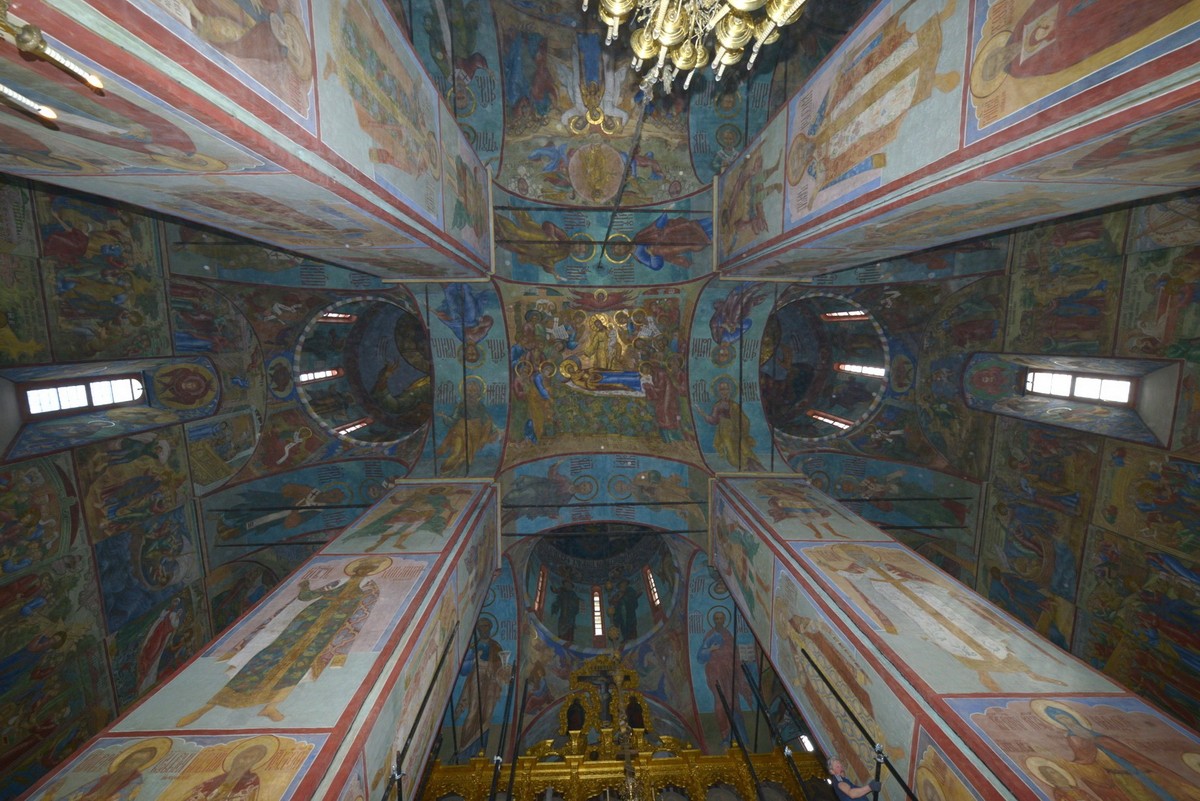 Assumption Cathedral. Fragments of the vaults and pylons paintings

The central aisles and the corresponding walls of the facades are wider than the others, not repeating the regularity of the forms of the Kremlin cathedral. Behind the iconostasis there are choirs in the form of a three-tier gallery similar to choirs of the Dormition Cathedral of the Moscow Kremlin. 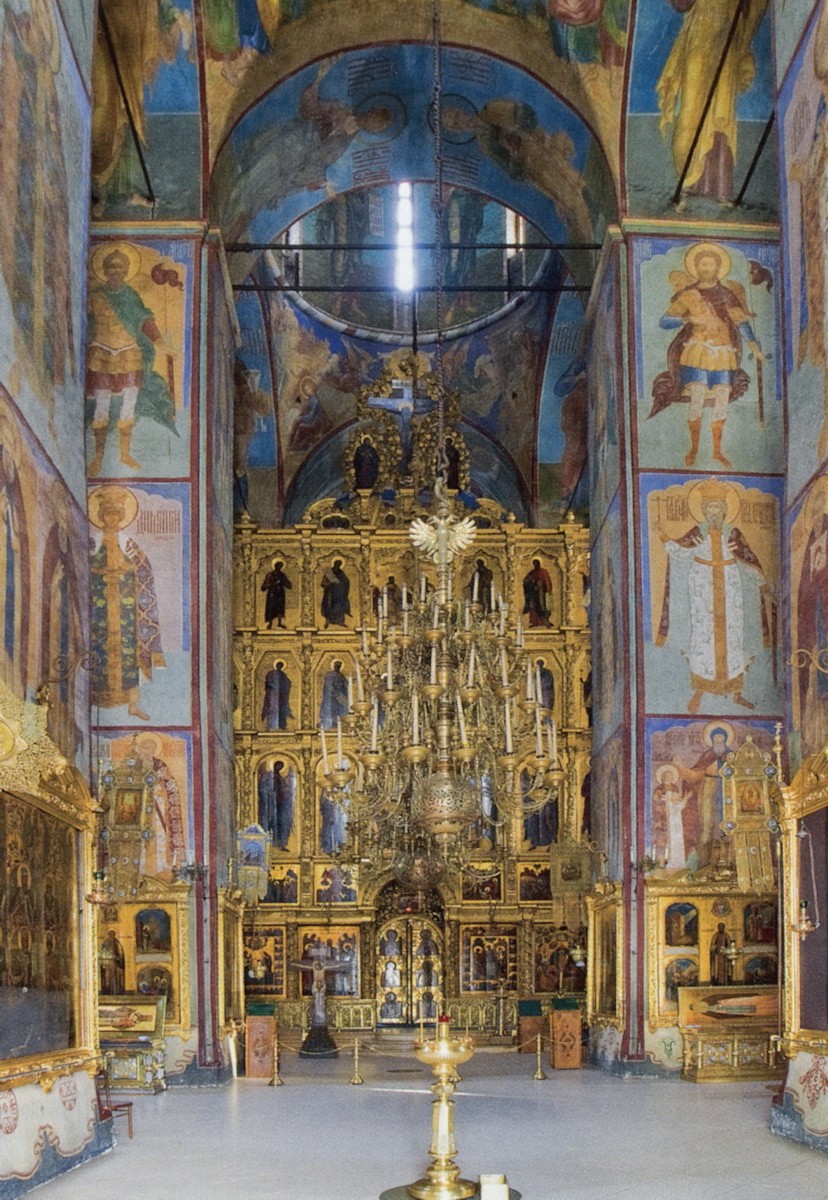 Interior decoration of the Cathedral of the Assumption

The main altar has two side-altars: the Great Martyr Theodore Stratilat and Martyr Irina, in honor of the heavenly patrons of Tsar Theodore Ioannovich and his wife, Tsarina Irina Fedorovna Godunova. Another side-altar, of St. Nicholas the Wonderworker, was dedicated to the years 1608-1610, the time of the heroic defense of the monastery from the Polish-Lithuanian army. 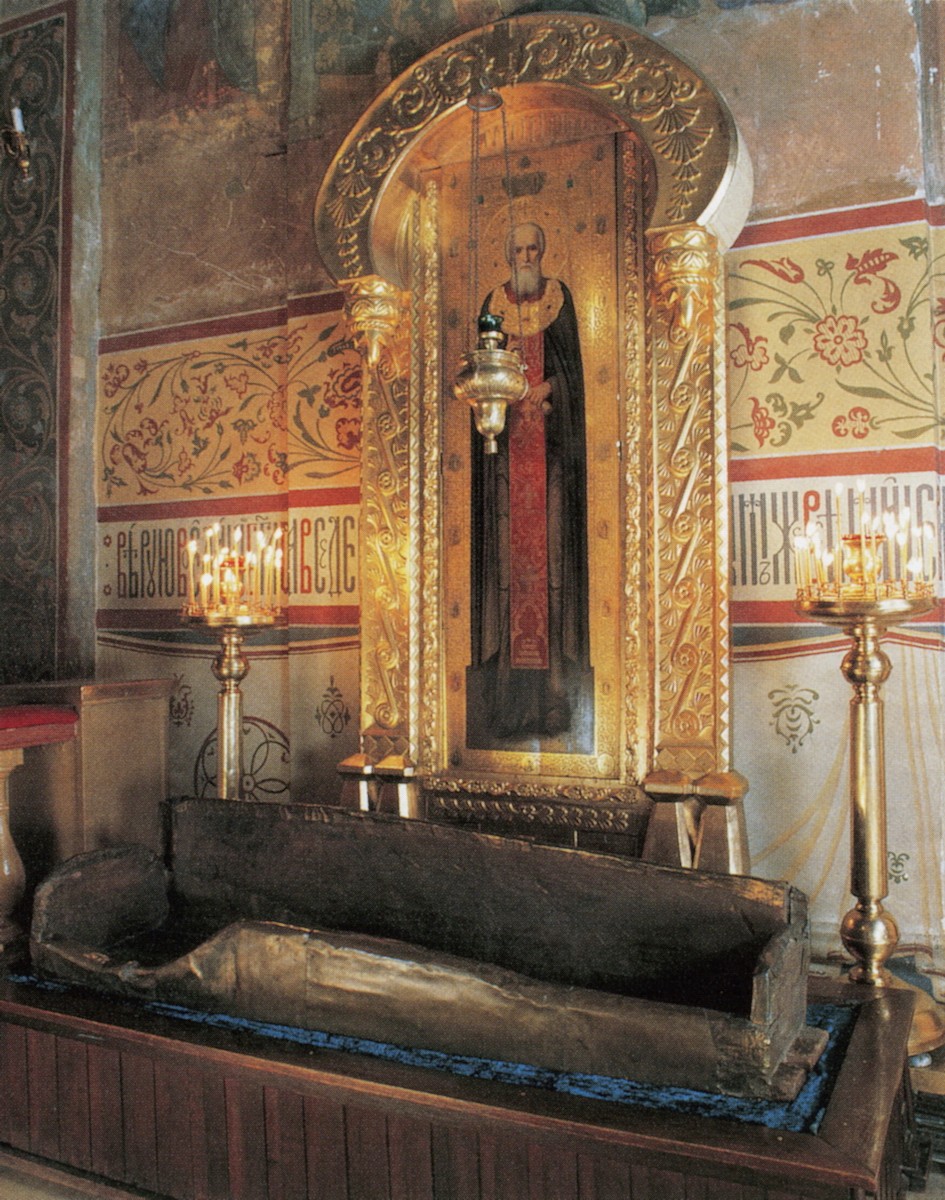 The first wooden reliquary of Venerable Sergius of Radonezh

In the cathedral on the “noon” (southern) side in a glass sarcophagus is kept the main sacred thing of the cathedral – a wooden coffin, in which the relics of Venerable Sergius of Radonezh rested until 1585. In 1585 the coffin was transferred from the Trinity cathedral to the Assumption cathedral, and the relics of the Venerable reverend were transferred to a silver, gilded reliquary in the Trinity cathedral, which was completed under Tsar Fyodor Ioannovich. 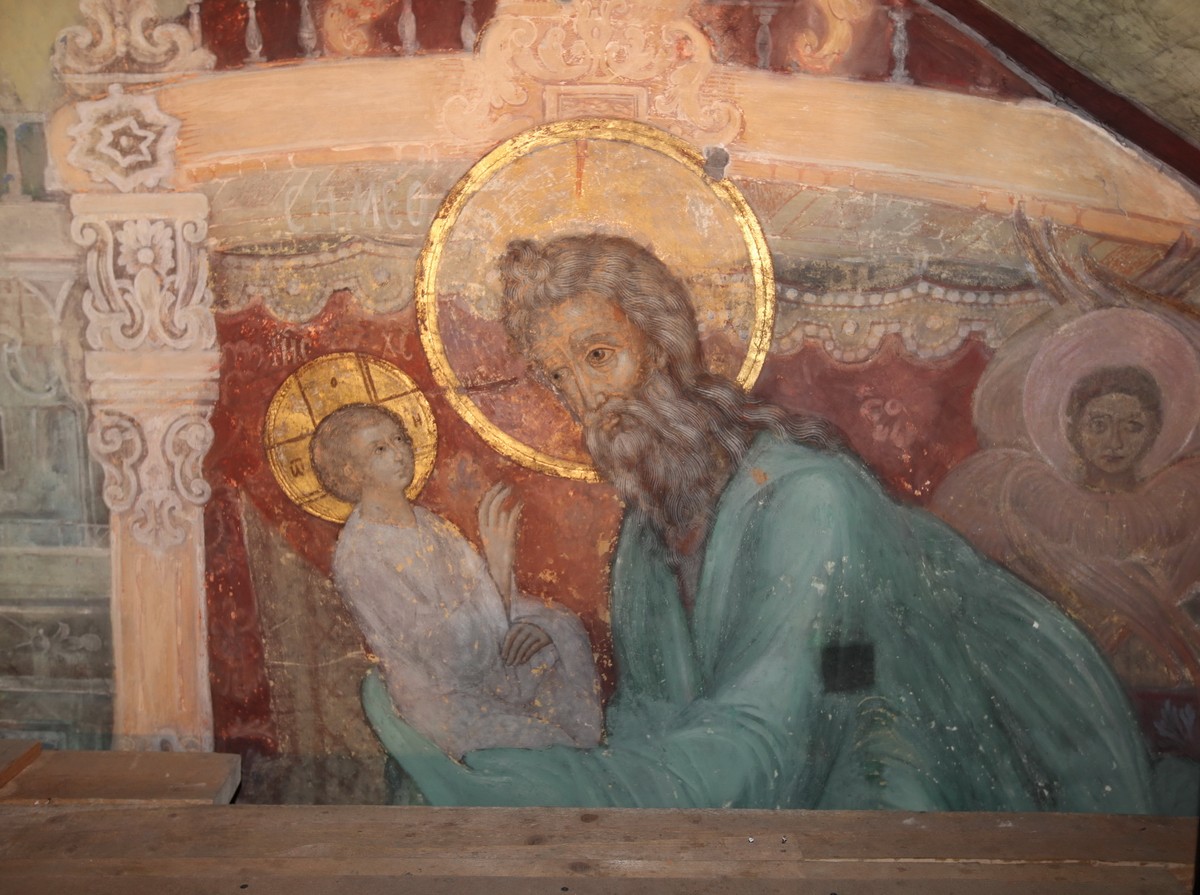 Simeon the Epiphaniac. Fresco of the Assumption Cathedral

The cathedral was painted with frescos during three and a half summer months of 1684 by the masters from Yaroslavl and Troitsk led by Dmitry Grigorievich Plekhanov, one of the most famous icon painters of that time. This artist is credited with a number of remarkable murals, including the murals of the Archangel Cathedral in the Moscow Kremlin (1660-1666), the Dormition Cathedral in Rostov (1676), the Sofia Cathedral in Vologda (1686-1688) and others. 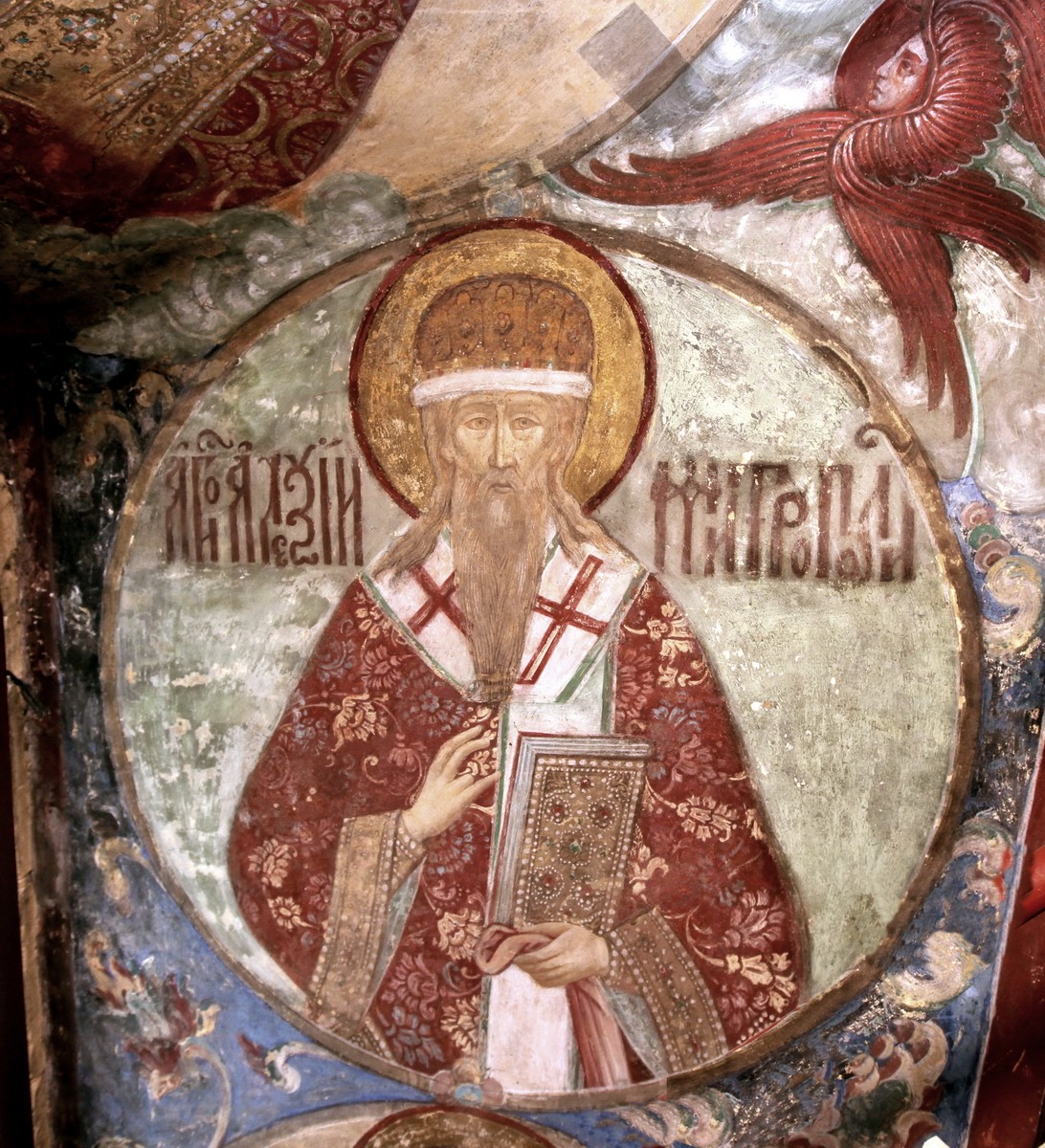 Hierarch Alexis, Metropolitan of Moscow. Repainting of the southern wall of the Dormition Cathedral

The mural painting of the Assumption Cathedral is made in the best traditions of the 17th century fresco painting and is a coherent and vivid complex. Over the XVIII-XIX centuries, it has been repeatedly renewed, and in some places it has survived under several layers of records. On the northern and southern walls, in four registers, are images with Gospel themes, themes of the akathist to the Mother of God, the Seven Ecumenical Councils and a belt of “towels”; on the western wall is the “Last Judgment”. Powerful pylons and window apertures depict figures of saints. 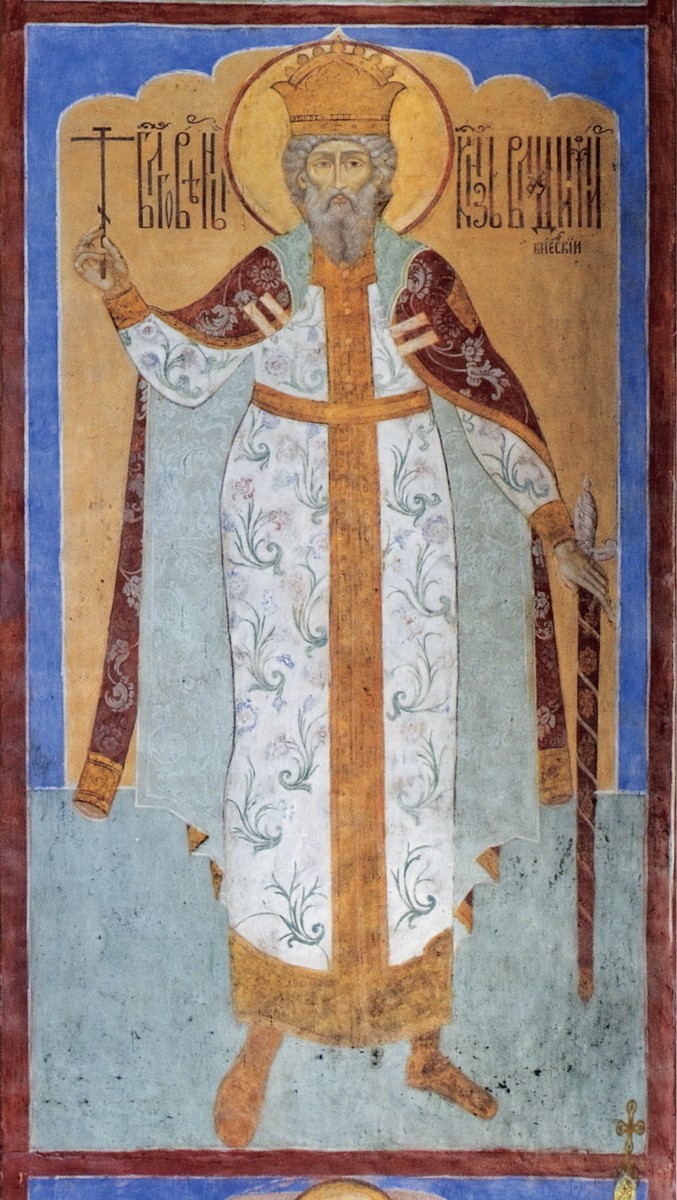 Numerous images of Russian saints of princely origin: princes Vladimir of Kiev, Boris and Gleb, Alexander Nevsky, Mikhail of Chernigov, Dovmont of Pskov, tsarevitch Dimitry and others are remarkable feature of the cathedral monumental painting. An important place is taken by the images of especially revered reverend fathers: Onufrii the Great, Peter of Athos, Pavel of Feveysk, Antonius and Feodosius of Pechersk, Zosima and Savvatius of Solovetskiy.

A special theme of the painting is the images of the Radonezh wonderworkers Venerable Sergius and Nikon, Micah, Maxim the Greek, Savva of Stromyn, including a rare image of the monastery’s archimandrite Dionysius (Zobninovsky). 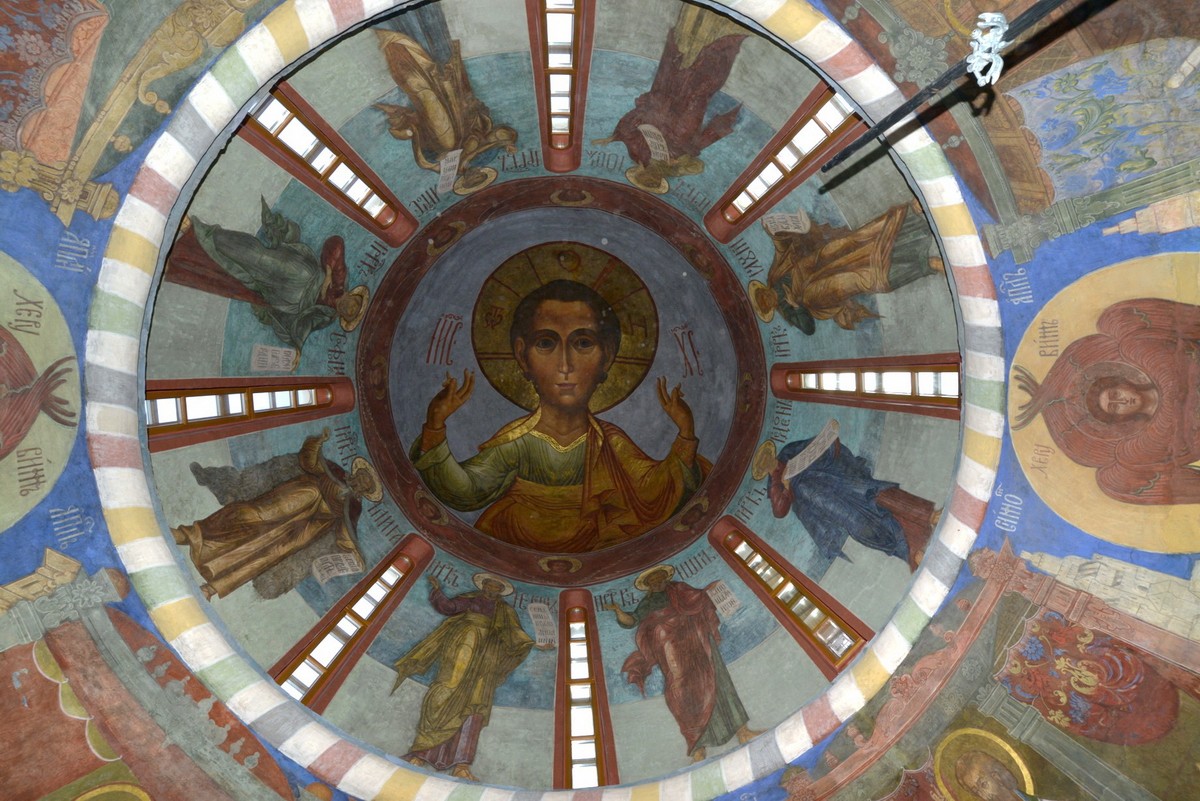 The adolescent Jesus Blessing. The painting of the small dome of the Assumption Cathedral

The central dome is occupied by the image of Christ Almighty; the small ones display the image of the Lord of hosts, the Prophet Jesus Blessing, the image of the Most Holy Mother of God “The Sign” and St. John the Baptist; in the drums – the figures of forefathers and prophets. 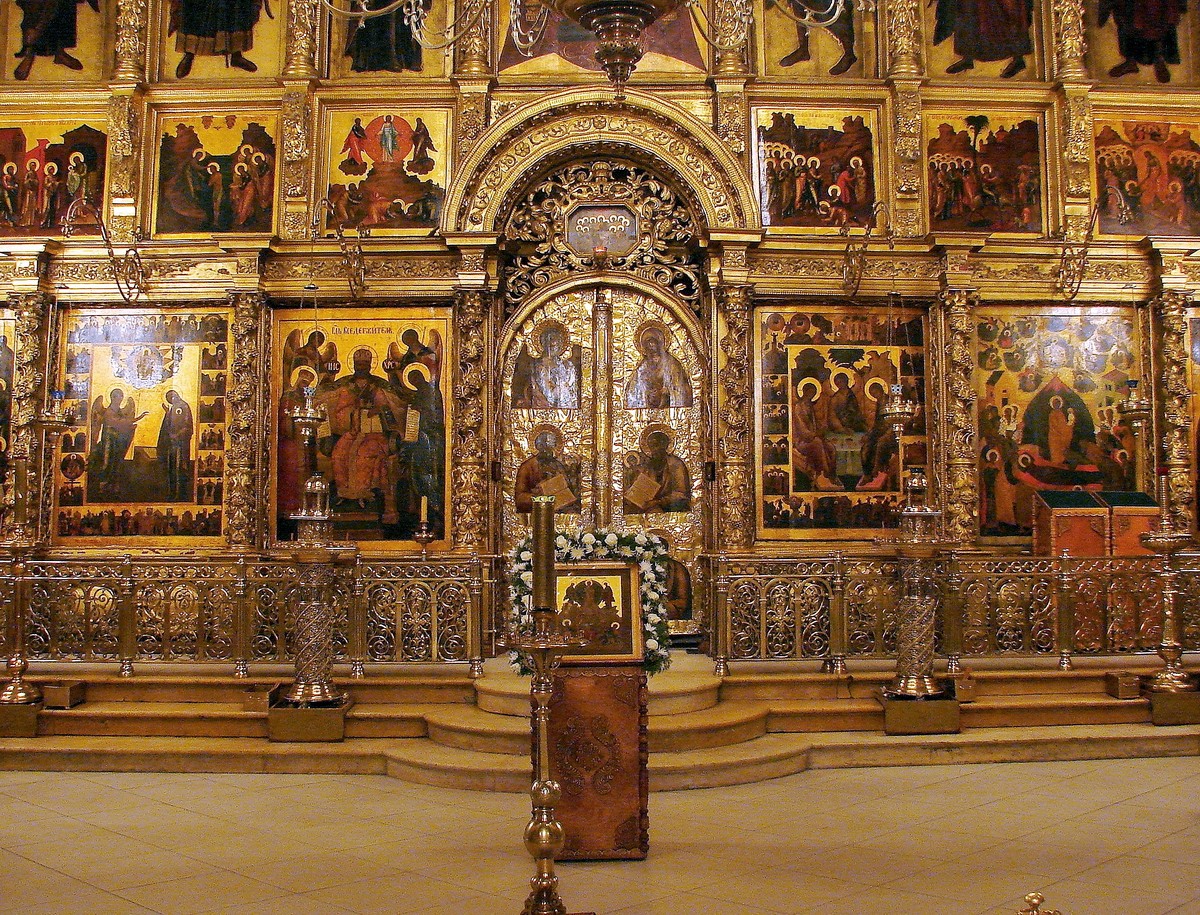 The iconostasis of the Assumption Cathedral

Apparently, simultaneously with the frescoes a five-tier carved gilt iconostasis was also created, which currently includes 76 icons. The majority of icons in the iconostasis date back to the end of the XVII century. The icons have been repeatedly renewed and are under the record of the XIX century. 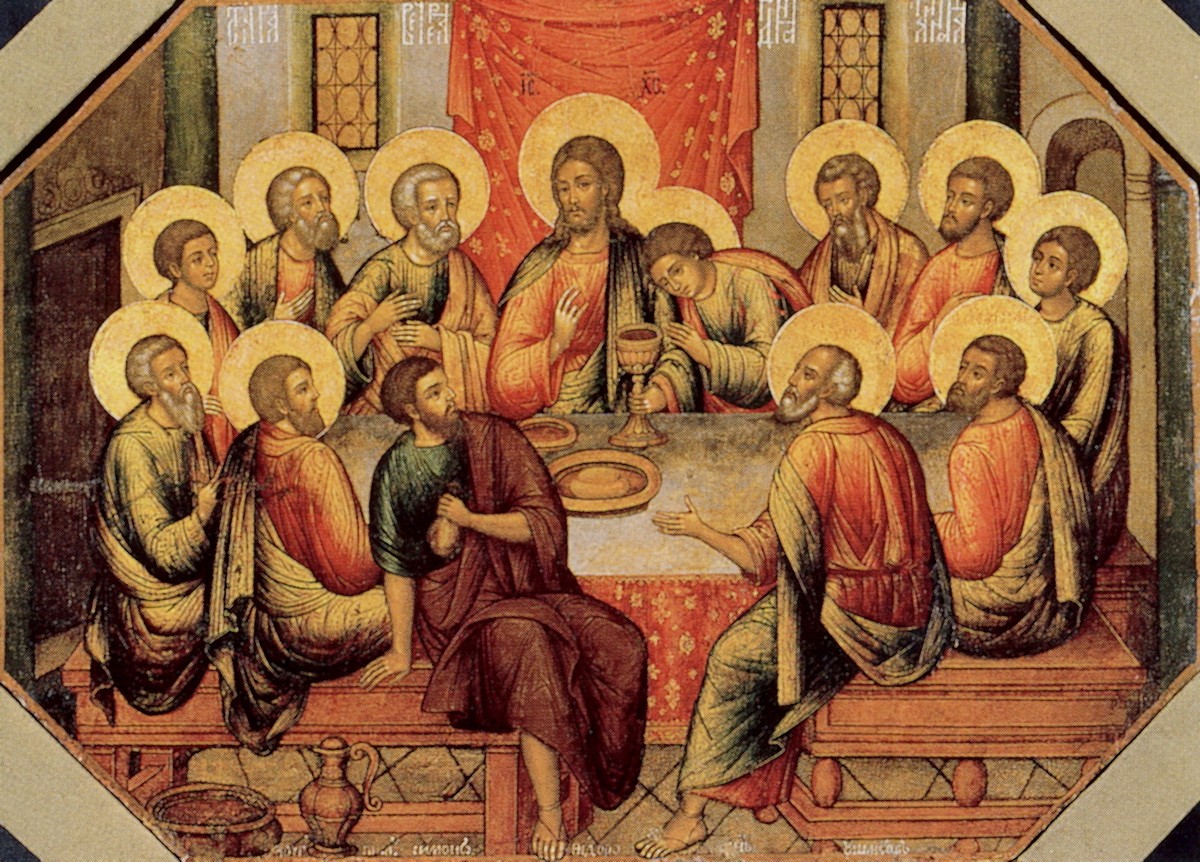 At the end of the 17th century, the famous tsarist iconographer Simon Ushakov took part in painting icons for the Assumption Cathedral. Among them is one of the iconographer’s last works, a signed icon of The Last Supper (1685, now in the Riznitsa Museum of the Trinity-St. Sergius Lavra). The researchers think that the images of the Annunciation of the Holy Virgin and the four evangelists on the Holy Gates are also the work of Simon Ushakov. 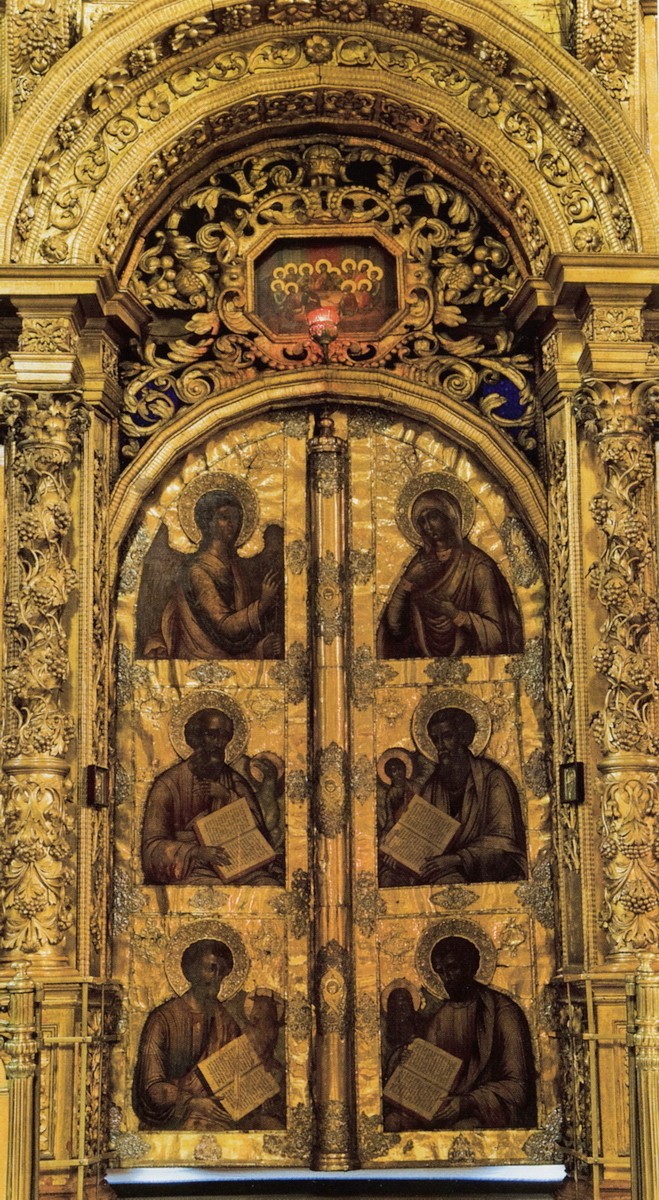 The Holy Gates of the iconostasis of the Dormition Cathedral 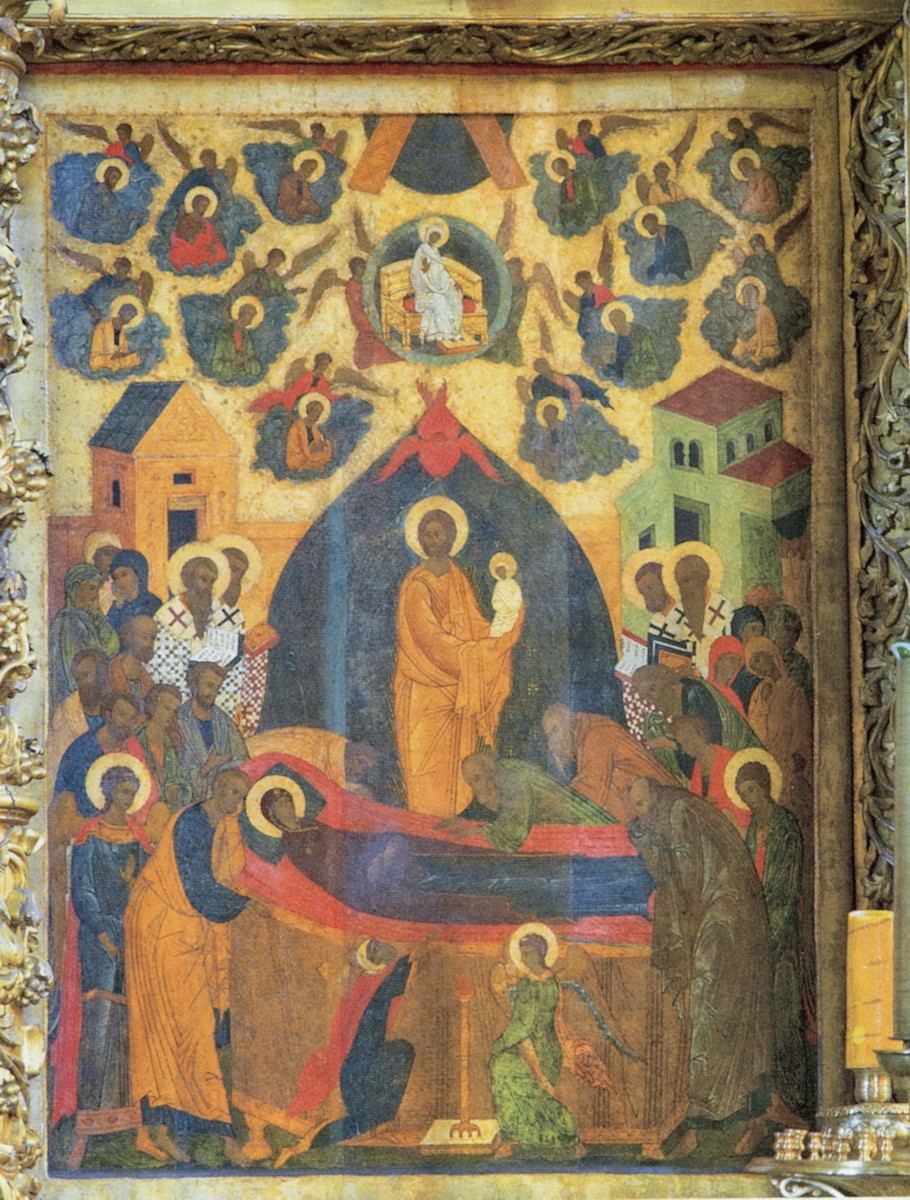 Two cast bronze and embossed panichadels made in the 17th century by the masters of the Moscow Armory Chamber, presented to the monastery by representatives of the Yanov family, have been preserved inside the cathedral. 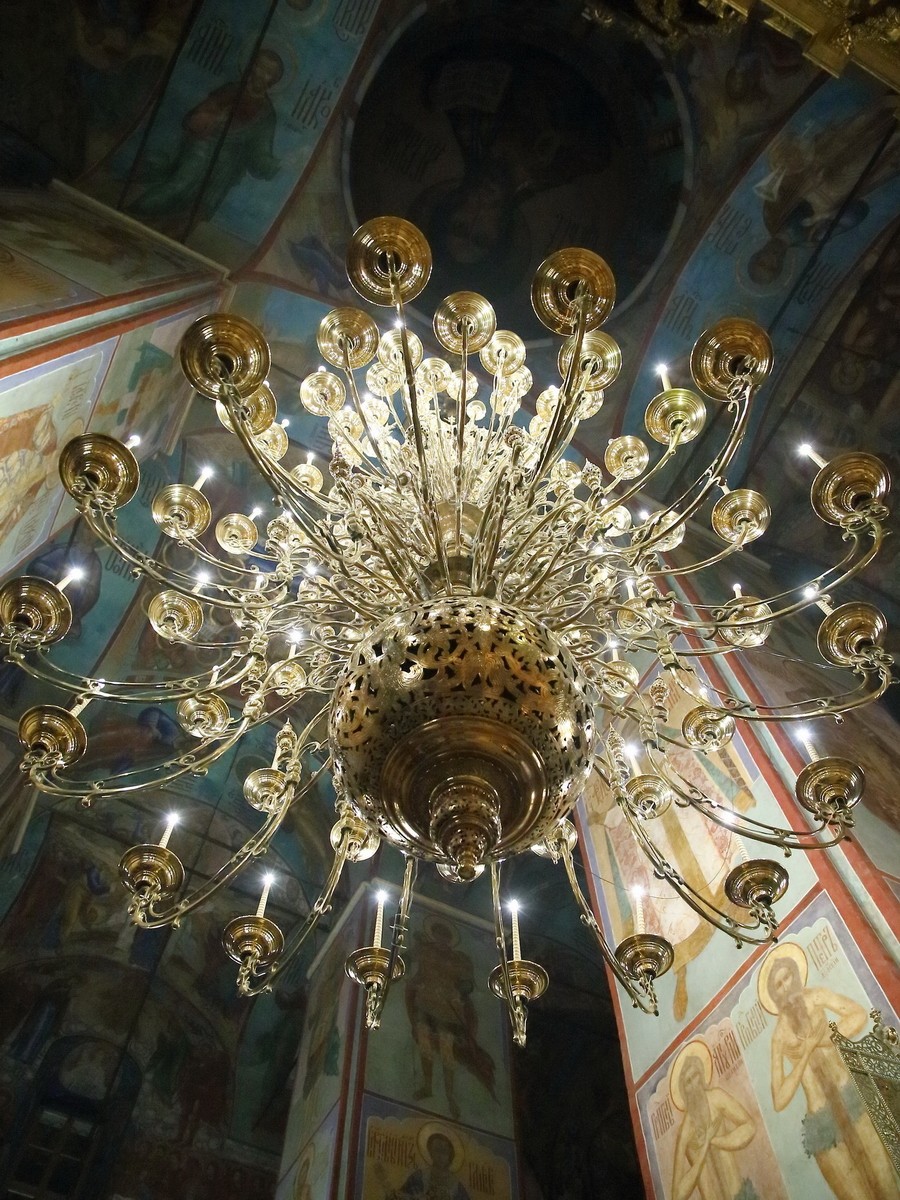 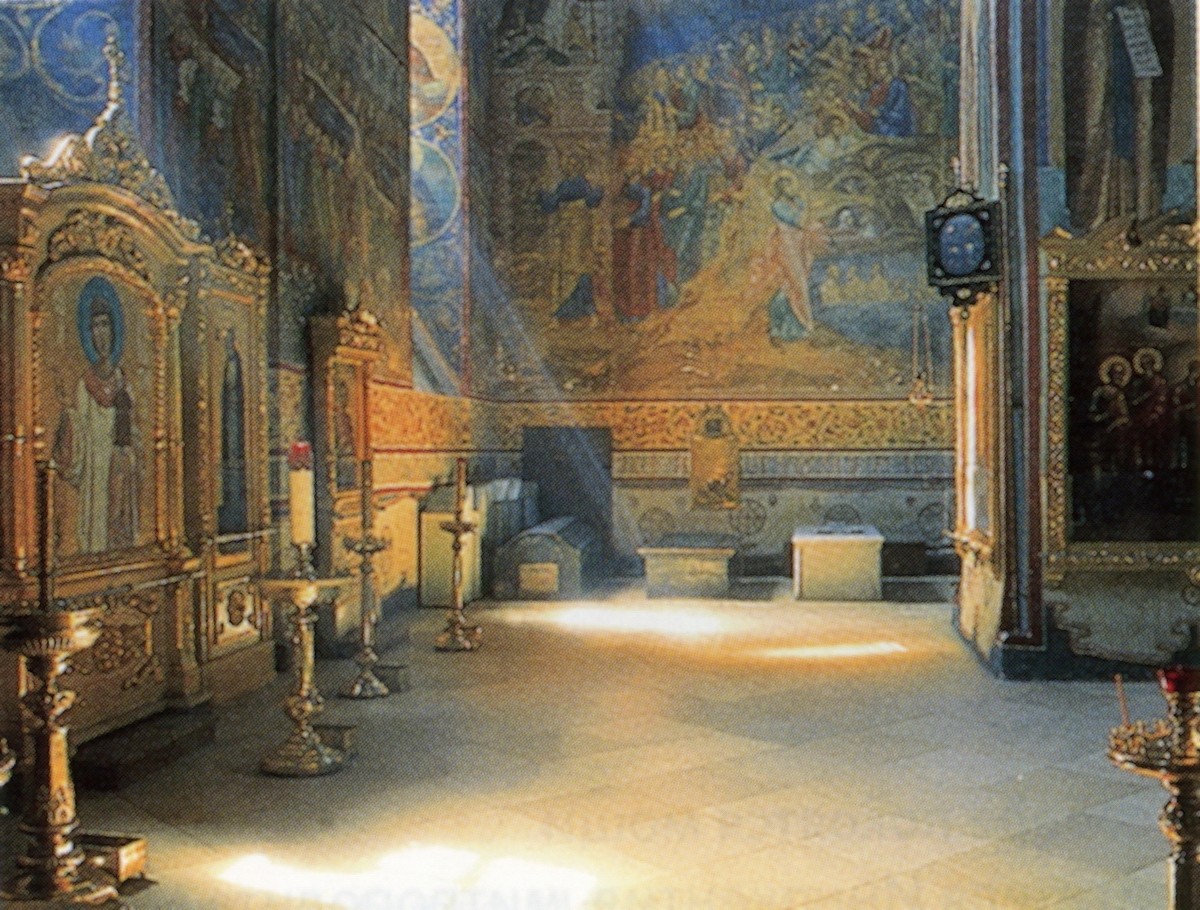 Western wall of the Cathedral of the Assumption

In the middle of XIX century, after the filling of the Pisarevsky pond in the academic garden to the north-east of the cathedral, the latter began to have dampness on the walls and cracks appeared. 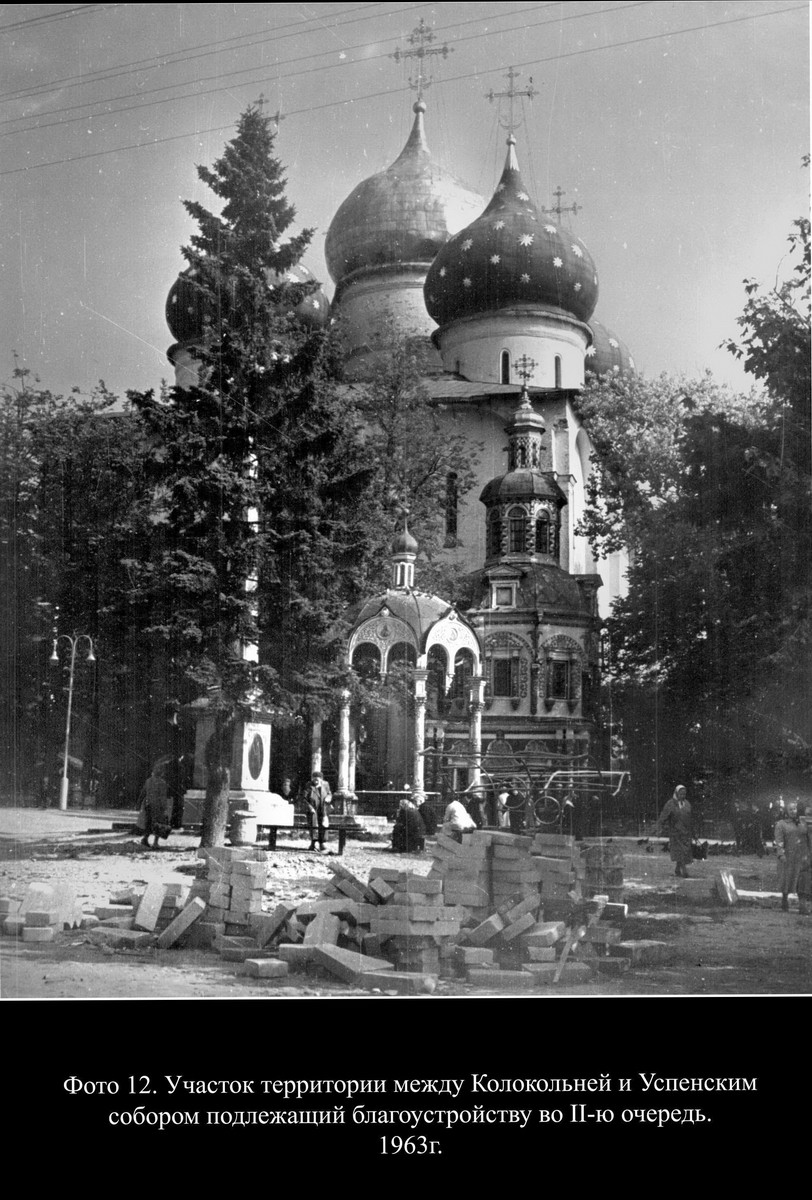 The first restoration of the Dormition cathedral after the Revolution was conducted in 1940-67, the frescos were washed from the late glue writings, the basement of the cathedral, damaged by damp was repaired, the window openings of the lower tier were restored, the initial mantle covering was restored. 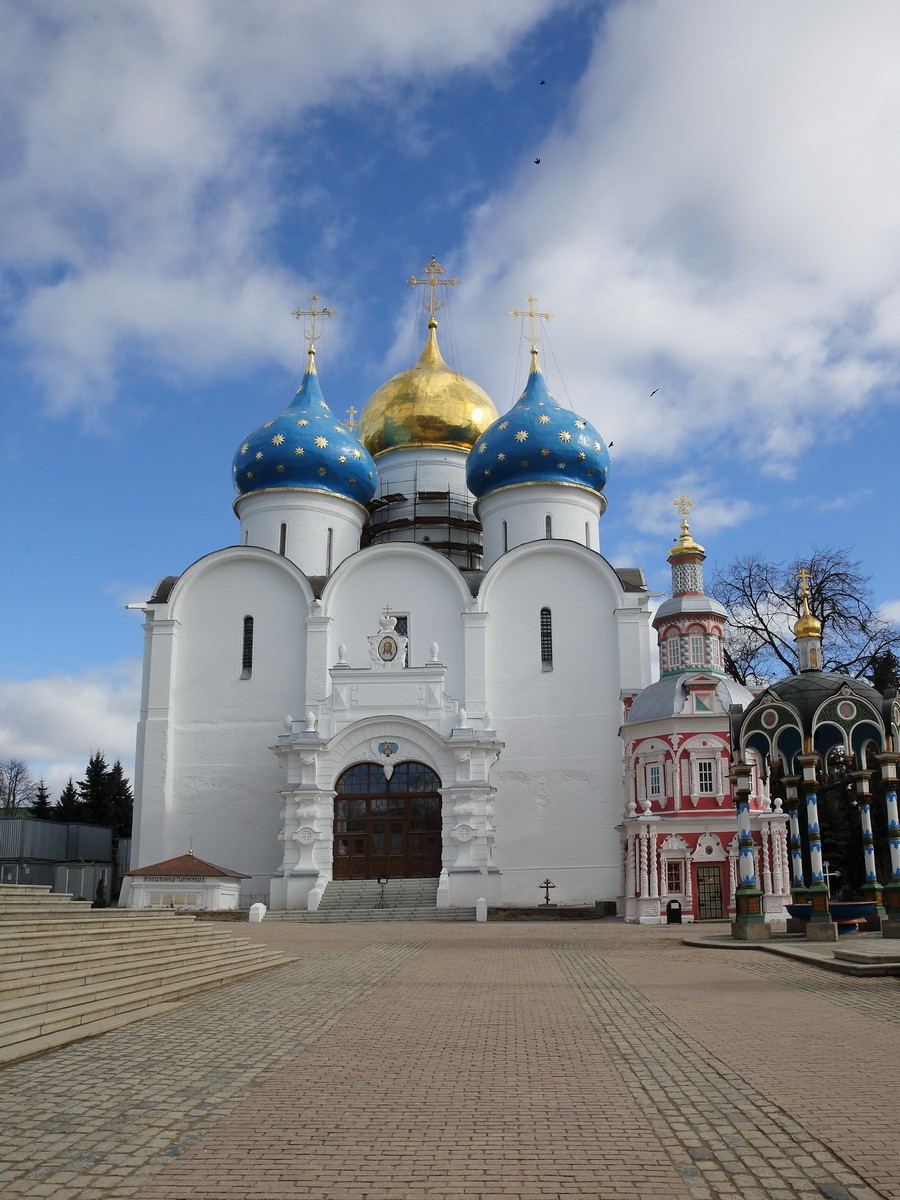 Extensive restoration work, carried out for the 700th anniversary of the birth of the Father Superior of the Russian Land by BALTSTROY helped to restore the Dormition Cathedral, the real gem of the Monastery of St. Sergius, to its original splendor. 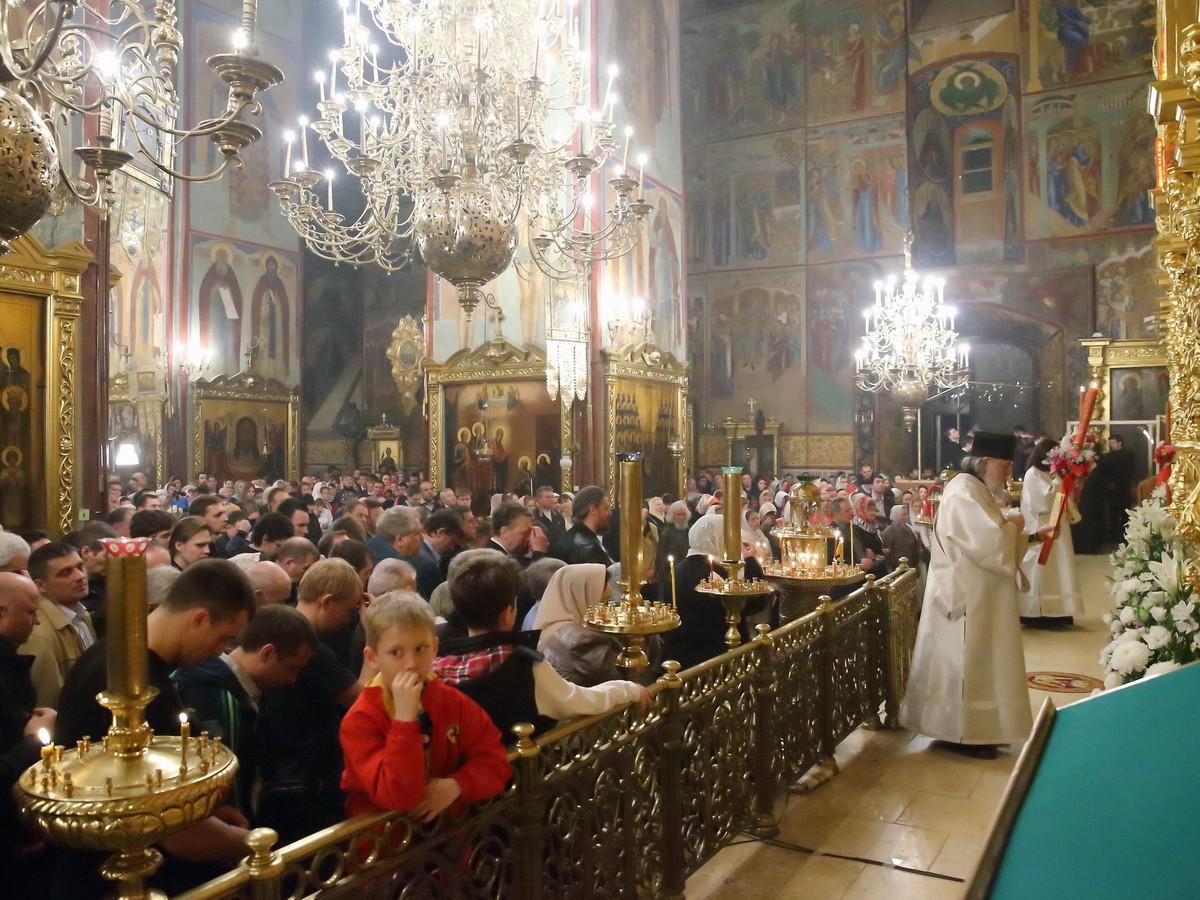 Dormition Cathedral is a masterpiece of Russian architecture built under Ivan the Terrible at Holy Trinity Sergius Lavra.

If you have at least half a day in Moscow, take a trip to the town of Sergiev Posad (only 1 hour by train) where the Holy Trinity-St. Sergius Lavra is located, which is listed by UNESCO as a World Heritage Site.

It is the spiritual heart of Russia.

This is a bird’s-eye view of the Lavra from the internet – the Assumption Cathedral is in the center of the Lavra.

This majestic five-domed cathedral was laid in 1559 at the command of Tsar Ivan the Terrible, who was present with his entire family

The height of the cathedral is 29 meters and is 2 meters higher than the Moscow Dormition Cathedral.

The cathedral also has a crypt underneath, where Moscow metropolitans are buried.

We go inside the cathedral, which has four thrones, but since three of them are in the altar of the main one, built in honor of the Assumption of the Mother of God, it seems that the cathedral is single-altar

A special atmosphere in the cathedral is created by a magnificent gilded iconostasis, consisting of five tiers of icons – there are 76 of them – they are mainly icons from the 17th century.

Different works on the decoration of this temple were carried out until the 18th century.

This cathedral is an undoubted masterpiece of Russian architecture.

Address of the Cathedral of the Assumption – Holy Trinity Laura of St. Sergius, Sergiev Posad.

✔️ Russian guides and excursions around the world. Transfers, photographers services and much more.