Astypalea is a small island of the Dodecanese islands in the southeastern Aegean. Thanks to its secluded location, it manages to remain out of sight of mass tourism. This is why it still retains its authenticity.

Despite belonging to the Dodecanese island group, Astypalea has a characteristic Cycladic architecture. 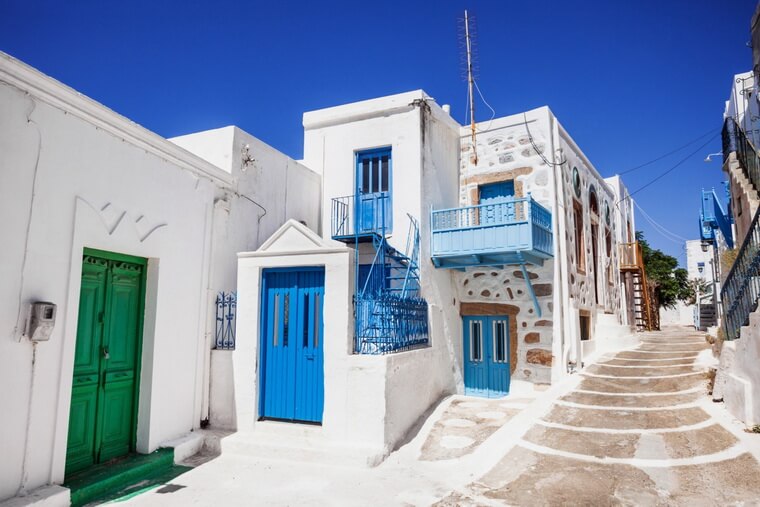 The cubic whitewashed houses and churches, the narrow streets, the blue windows and wooden balconies, create a unique atmosphere of the Cyclades.

Chora, the capital of the island, is built on the slopes of a hill. From here you have a breathtaking view of the Aegean Sea. On the very top of the hill is Kverini Castle, built during Venetian times. 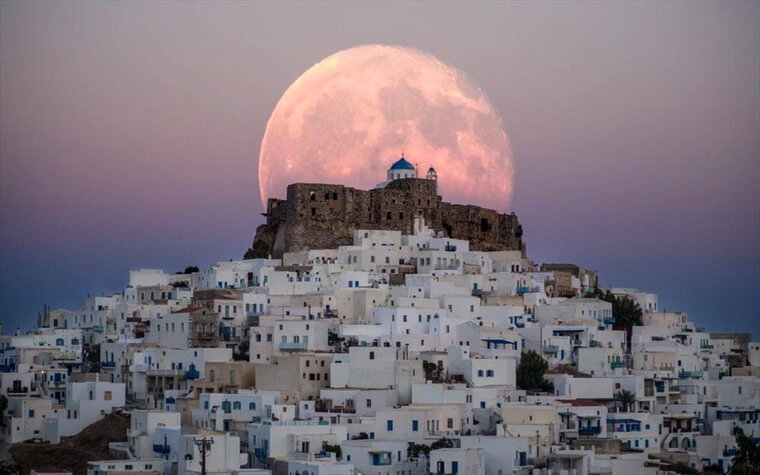 This castle protected the island during the Middle Ages, but has now become the main attraction of Astypalea

The island of Astypalea is situated in the Aegean Sea, between the famous Greek islands of Crete, Mykonos and Rhodes. Geographic coordinates (36.561586, 26.346925)

Few Greek islands can boast such impeccable charm as Astypalea. Viewed from a certain angle, Astypalea bears a striking resemblance to its not-so-distant but far more charming counterpart Santorini. 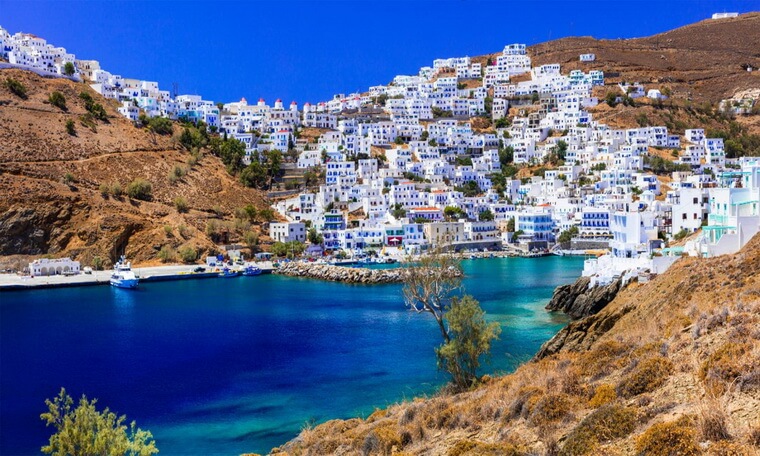 The island, with its pristine beaches, white houses and uncharted walkways, is a traveler’s paradise. Especially for those who want to avoid the large crowds of vacationers.

Astypalea and its attractions

It is the main port and capital of Astypalea. And of course the most popular place on the island. Picturesque cascades of white houses, a Venetian castle on top of a hill, windmills, museums and many places for perfect photos. All this is Chora. The town is often referred to simply as Astypalea.

The Venetian Castle of Astypalea

The main castle of Chora is called the Castle of Querini. This ancient fortress is located on top of a hill. The castle is made of dark stones, which create an amazing contrast with the white houses on the slopes of the hill. 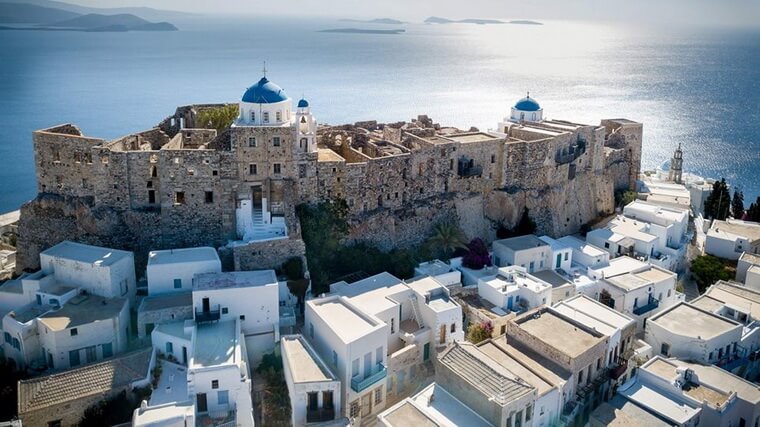 The history of the castle is inextricably linked to the struggle for power between the Venetians, Byzantines and Turks

The castle was built by the noble Venetian family Querini, who came to rule the island of Astypalea after the siege of Constantinople by the Crusaders in 1204. The castle was built as a refuge from pirates and other enemies. In 1310 John Querini II carried out a major reconstruction of the fortress. The castle belonged to the Venetians for over 300 years, and each ruler made various changes to its design.

Stone frescoes with family coats of arms of different rulers have survived in the castle. 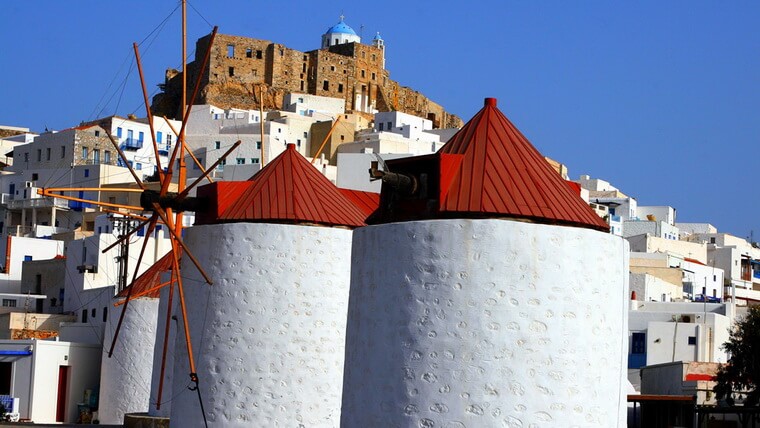 The windmills of Astypalea

The eight well-preserved ancient windmills of Astypalea are perhaps as famous as the castle. According to historians, the mills date back to the 18th century.

Located on top of a hill, the traditional windmills certainly add to the charm of Chora. 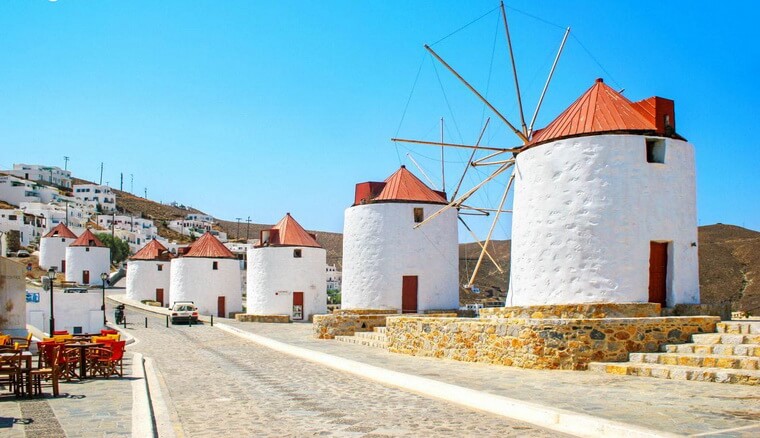 Just one kilometer south of Chora is the village of Pera Yalos. It used to be the main port of the island. Today it boasts a relatively developed tourist infrastructure and a charming beach, ideal for swimming. Boat excursions to nearby attractions and other beaches run from here. 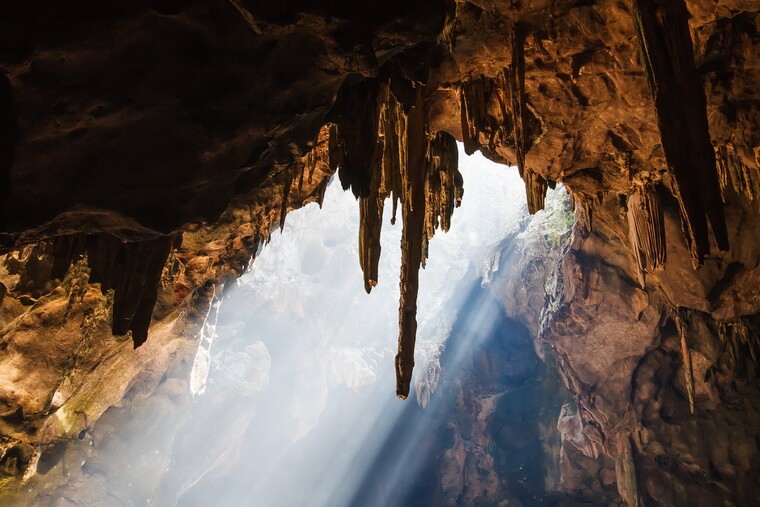 This attraction is perfect for caving enthusiasts.

Drakos Cave or “Dragon Cave” is a natural cave in the north of the island (near the village of Vathi). The color of the stalactites and stalagmites in it varies depending on the content of minerals in the water. That is why each visit to this cave is not like the previous one. 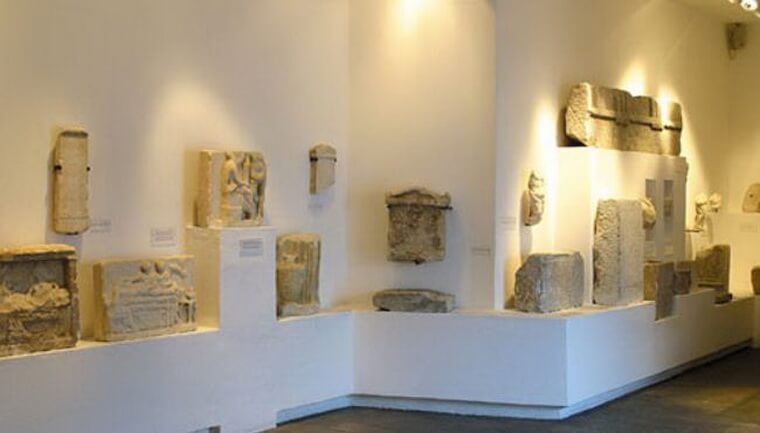 The compact but informative Archaeological Museum of Astypalea will provide you with a brief overview of some of the finds on the island. Exhibits include jewelry, tools, pottery and other items dating from prehistory to the Middle Ages. 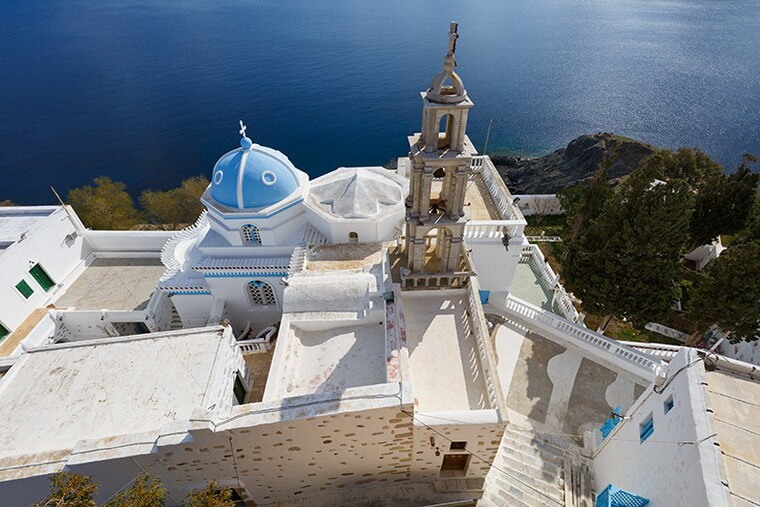 The epitome of the iconic “white with blue dome” Greek style. It’s a great view for photos. The church stands just below the main castle in Chora. It was built in the mid-18th century.

The seaside resort of Maltesana (named after the Maltese pirates who used the island as their hideout) is a popular destination among vacationers. Some of the must-see attractions include the Greek baths of Talaras, the ruins of an early Christian basilica and the ancient church of Analipsi.

The shape of the shoreline near the village of Vathi gives the water a stunning crystal blue color. In and around the village you can see the bizarre rock formations of the Drakos Cave and the remains of an ancient Minoan settlement.

READ
The City of Cuenca and the Spanish Hanging Houses

Just in two kilometers from Chora is located a small village Livadia. It is located in a valley with citrus groves and lush vineyards. The cave of Negros in Vatses (accessible by boat from Chora) and the ruins at the top of the hill of Agios Vasilios are a must-see.

The church is located in a remote area on the east side of the island. Here you can see a natural rock formation in the shape of the Virgin Mary embracing a child. This church can only be reached by boat or on foot.

The Beaches of Astypalea

Unlike some other Greek islands in the Aegean Sea, Astypalea does not boast such a developed tourist infrastructure. In the bigger settlements (such as Chora, Maltesana and Livadia) the beaches are usually well maintained and equipped. 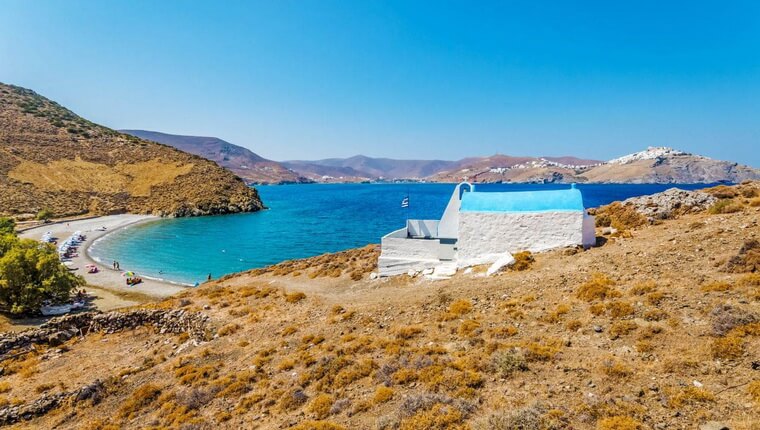 The sandy beach of Agios Konstantinos is located 7km south of Chora, in a pristine cove. There are some facilities like sunbeds and umbrellas, but the beach remains mostly uninhabited and the only tavern is open only in summer. 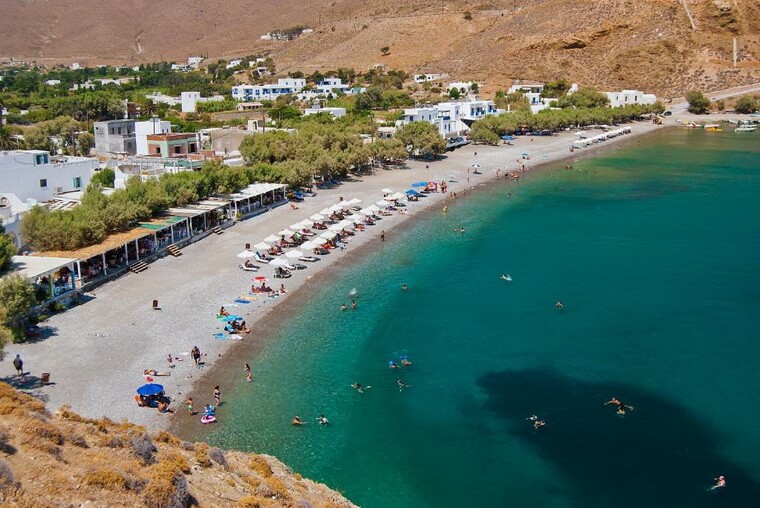 The beach at Livadia is pretty well maintained. There are several secluded coves and one long beach where water sports are often practiced. 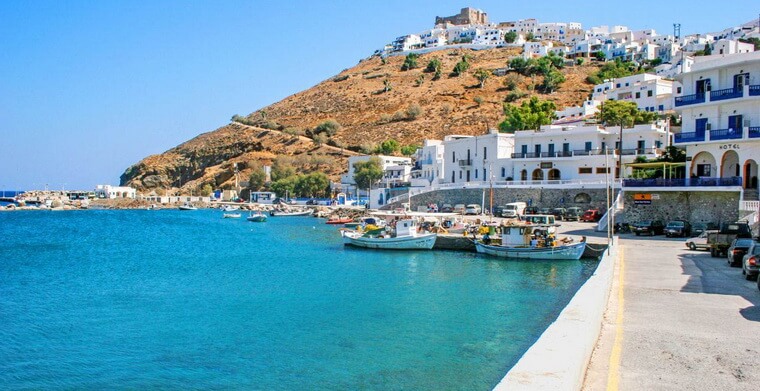 Pera Yalos (a short walk from Chora) has a relatively well-developed tourist infrastructure and a charming beach, ideal for swimming and snorkeling. There are many cafes and tavernas nearby. 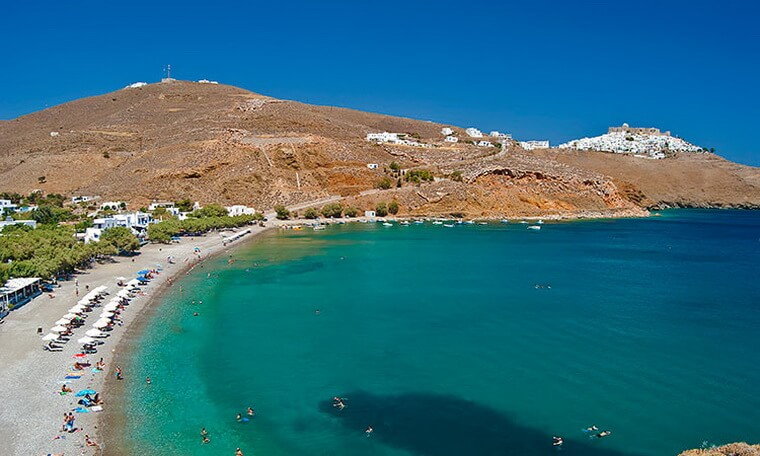 The beach has a long coastline consisting of several secluded coves and one pebble section.

Marmari beach consists of three small beaches. But only one of them has some facilities (sun loungers and umbrellas). The other two beaches are almost untouched by civilization. 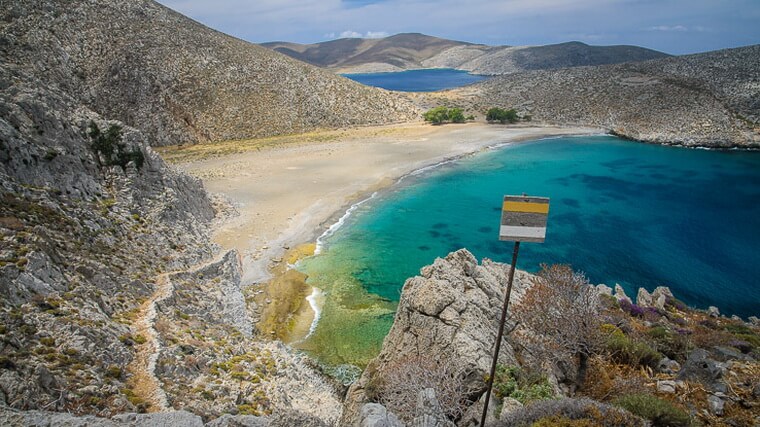 This pebbly and pristine beach is located at a considerable distance from Chora. It is ideal for seclusion seekers. 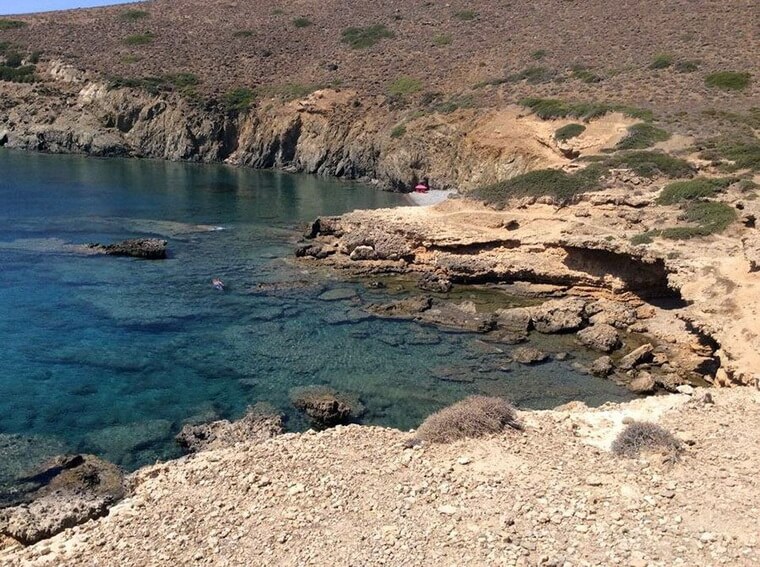 It is not a real beach. They are just a few boulders above the sea. This is a place where you can dive from the rocks and swim in the sea. Plakes is located 8km east of Chora.

Tsanaki is a small secluded bay with crystal clear waters near the tourist village Livadia. It is the official nudist beach of the island. Be sure to take this into account if you plan to go there. 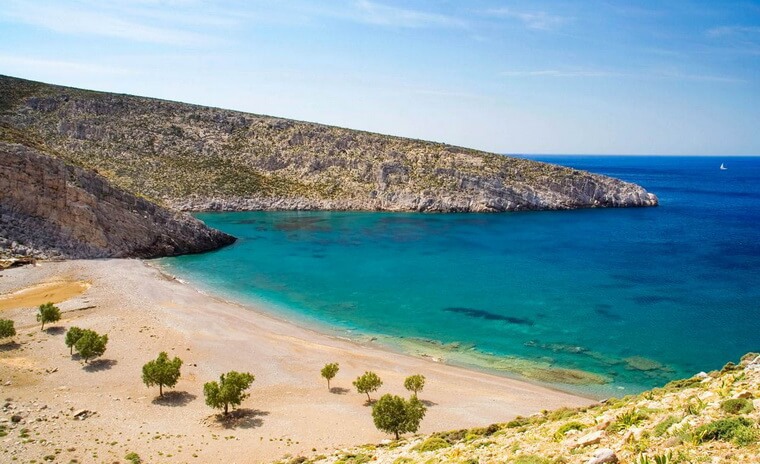 Although this beach is very compact, it is ideal for those who want to escape from the touristic area of Chora (located 21km away).

This is one of the most famous sandy beaches on the island. But despite its relative popularity, it does not get crowded.

The beach is located 7km northwest of the capital Astypalea. It is located directly on the isthmus connecting the two parts of the island. You can reach it via an unpaved road. The beach is not very crowded yet and has a sandy shore. 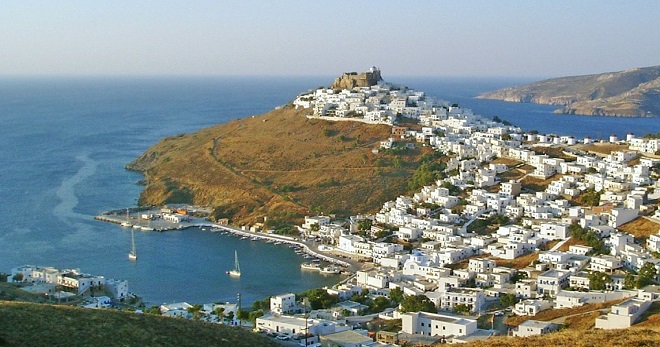 The first thing that greets the traveler on the island of Astypalea in Greece is the wild, sweet scent and arid landscape as far as the eye can see. “Astypalea is a little drop of heaven in the middle of the Aegean Sea,” said Maria Kampuri, vice mayor of the island, and it is perfectly true.

In the old days, the island was called Ichthioessa because of its abundant fishing grounds. The first people settled here back in prehistoric times. In 1204 the island came under Venetian rule, in 1537 the Turks occupied the island. Like the other islands of the Dodecanese, Astypalea remained under Turkish rule until 1912, then it was conquered by the Italians, the British and the Germans, until it was finally integrated into Greece in 1948. Only about 1,500 people live here in an area of 97 square kilometers. 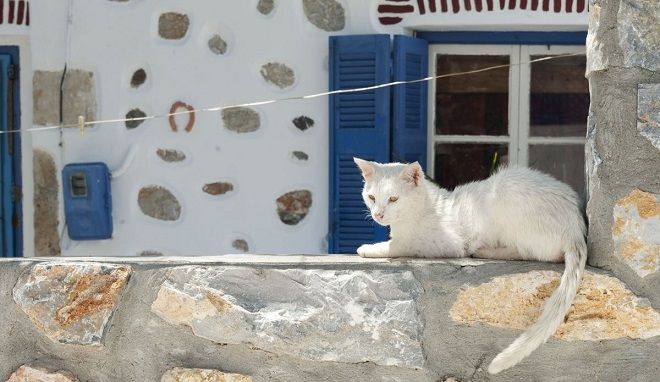 Located at the meeting point of the Dodecanese and Cyclades archipelagos, in the heart of the Aegean Sea, the island of Astypalea is named after the beautiful nymph whom Poseidon fell in love with. The nymph turned into a tailed leopard to elude the god, but he managed to find her and kidnap her. Perhaps she then transformed from a leopard into a butterfly and spread her wings while resting in this secret corner of the Aegean Sea. The island is indeed shaped like a butterfly, but the legends surrounding its name are shrouded in mystery and lost under whitewashed houses with blue doors or carried away by the wind beyond the foaming waves that caress the rocks and beaches of Astypalea.

The island is divided into Mesa Nisi (western part) and Exo Nisi (eastern part) by a thin strip of land less than 100 m wide. The coastline of Astypalea is very uneven, rugged, and full of reefs. 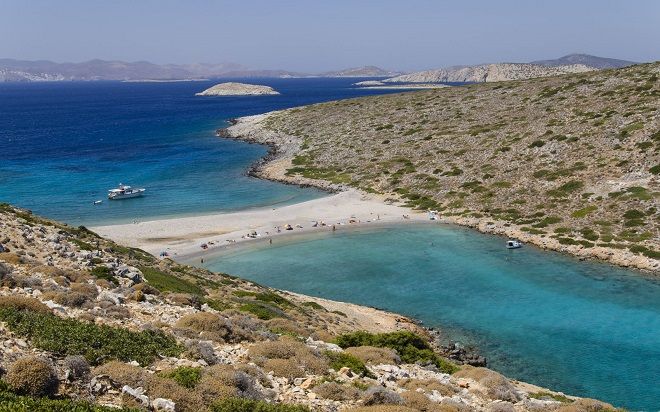 The relief of the island is hilly, many paths are difficult to follow because of the boulders and stones. That is why farming is difficult here – the soil is stony and infertile, but in some places it is possible to grow nice citrus groves and small private vegetable gardens. Even wild vegetation is extremely poor – thorns and dwarf juniper. The most common herb – sage, which the islanders brewed instead of tea. Animal life is not particularly diverse – there are many sheep and goats, but Astypalea is the only island in Greece, where there are no snakes. 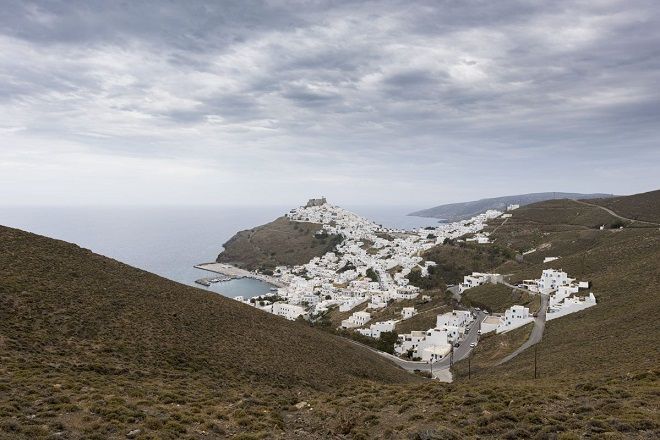 What to see in Astypalea?

Despite its modest size, the island holds many interesting places to wander to get to know Astypalea better. The most popular attractions are:

Being on the island of Astypalea, it is impossible not to take a dip in the blue waters of the Aegean Sea. The most popular beaches, Livadia and Agios Konstandinos, are located on the sandy coast. If you want privacy, go to Vatses or Kaminakia. The beaches of Maltesana are beautiful – narrow, but cozy and with beautiful views of both the sea and the entire island.

The eastern part of the island is occupied by a national park, and it is uninhabited. All civilization is concentrated to the east, including hotels and restaurants. You can comfortably spend time in apartments:

Do not look for fancy restaurants on the island, most of its establishments are small taverns with very tasty homemade food:

From Athens you can reach Astypalea in two ways: