The first and so far Europe’s only underwater museum (or museum of underwater figures), called Atlantico (originally Museo Atlantico) is a fascinating spectacle. The exposition at the bottom of the ocean can frighten on the one hand, fascinate on the other and amaze on the third. But for sure it will not leave anyone indifferent. Hundreds of concrete human figures rest in the waters of the Atlantic Ocean, attracting tourists and sea creatures.

Where is the Underwater Sculpture Museum

The Atlantic Museum is located off the southern shores of the island of Lanzarote in the Canary archipelago (belongs to Spain).

The sculptures are located on the bottom of the ocean at a depth of 12 to 15 meters near the resort of Playa Blanca. The total area of the territory on which the statues are located, about 2500 m 2 .

A little about the author and why he did it

The mastermind and creator of the Atlantic Underwater Museum is the British artist Jason de Caires Taylor (born 1974). He is quite an interesting man with a broad outlook and a boundless love of the sea. Jason is not only a sculptor, but also a diver. He is well aware that man, as a rule, causes irreparable harm to the environment, and for his part tries to benefit both tourists and nature.

For his statues Taylor uses a special type of inert marine cement, which is designed to last for hundreds of years. He avoids using metals because they are prone to corrosion and pollute the environment. 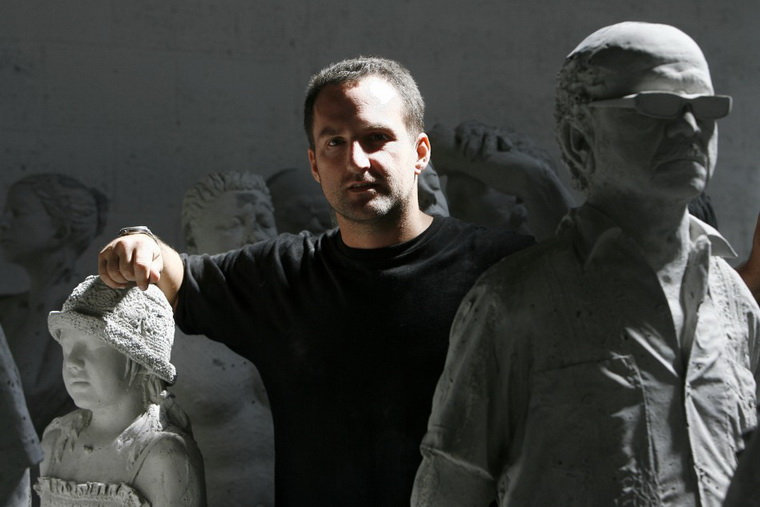 You probably know Jason de Caires Taylor as the author of the famous MUSA underwater museum in Cancun off the coast of Mexico.

On the island of Lanzarote he used the same technology as in Cancun. The goal of these ambitious projects is to achieve a positive interaction between humans and the underwater world. According to Jason’s team, the sculptures submerged in the water increase the number of marine life in the area by more than 200%.

To see the stunning underwater world in its natural setting, head to the amazing Palau Archipelago.

The main installations of the underwater museum

There are a total of 300 life-size sculptures in the museum. They are grouped into artistic displays that illustrate the many questions of humanity.

The composition depicts a group of children on brass boats called “jolateros.” It is a kind of metaphor for the possible future of our children and how difficult it is to sail through life on a fragile and unstable boat.

The sculpture consists of concrete sticks and represents a traditional funeral pyre. The prototype was a local fisherman from the island of La Graciosa, on the north coast of Lanzarote. 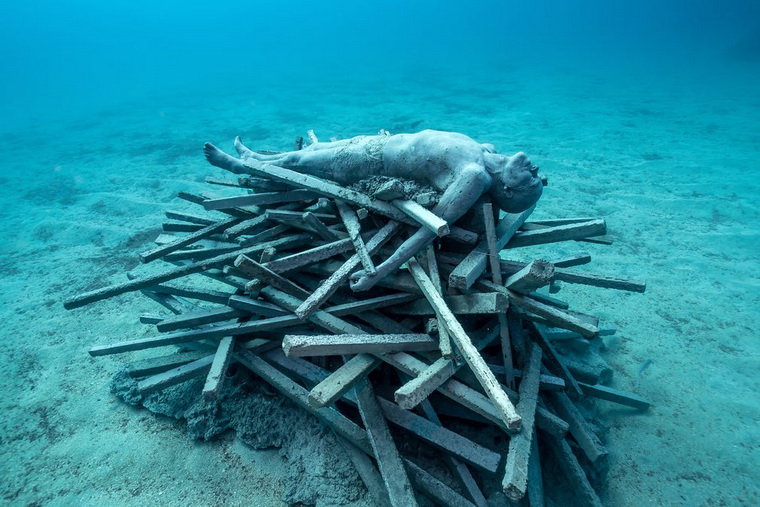 The Raft of Lampedusa

This installation seeks to show the tragedy and hope of refugees from Africa who began to arrive in droves in Europe on old unreliable boats. 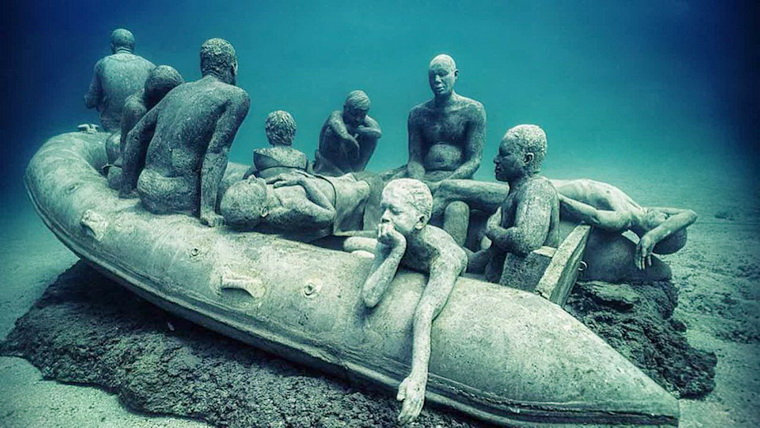 A couple taking selfies makes us think about the use of new technology and encourages us to look inside ourselves. The sculpture symbolizes the modern addiction to social media and the pursuit of likes. 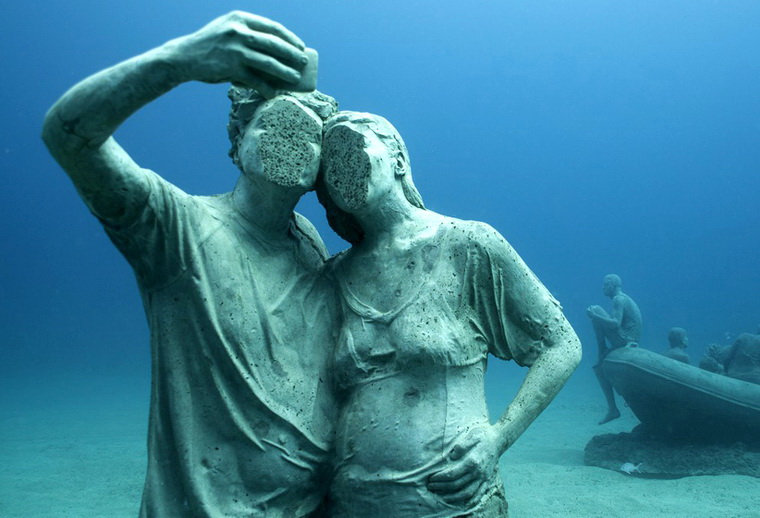 The large-scale composition consists of 35 human figures walking to the entrance in an underwater wall. It is a kind of boundary between the realities and the point of no return. Perhaps it is a symbolic entrance to the Atlantic Ocean. The wall extends 30 meters in length and 4 meters in height. It has only one rectangular doorway. The wall is a monument of absurdity, an unnecessary barrier that can be bypassed from either side.

This sculptural composition tells us that in fact there are no borders in the world, all borders are just conventions. Humanity has no right to separate the oceans, the atmosphere and wildlife. We often forget that we are all an integral part of the living system of the planet, and are responsible for the environment. 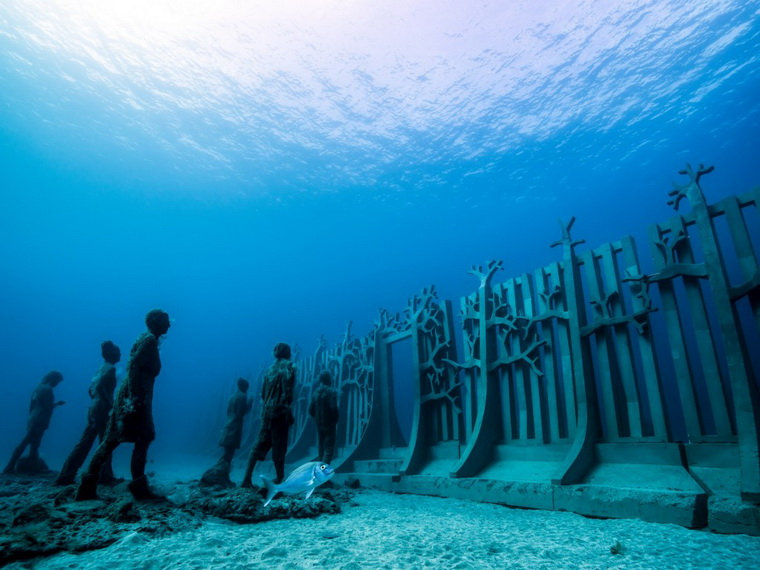 These sculptures represent a fusion of nature and man. Look closely, the statues are half human, half cactus. 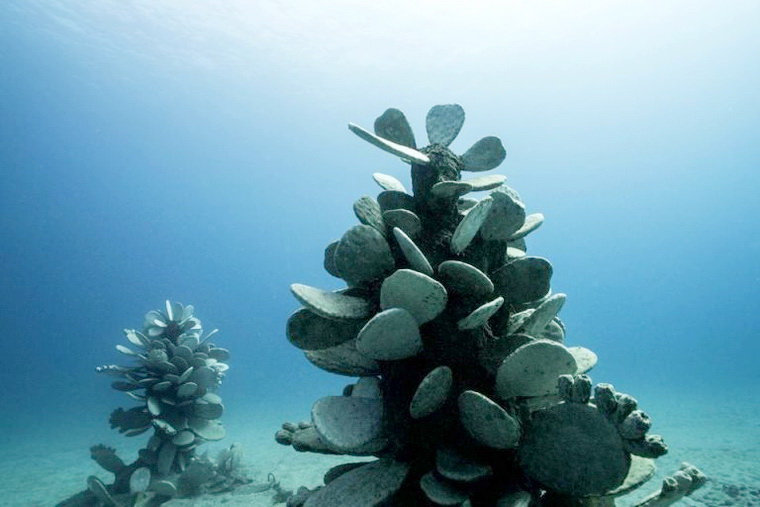 Here you will see a hybrid animal-human sculpture that looks into a large square mirror, symbolizing the moving surface of the ocean. The composition depicts water in water. It is like a portal to another world. 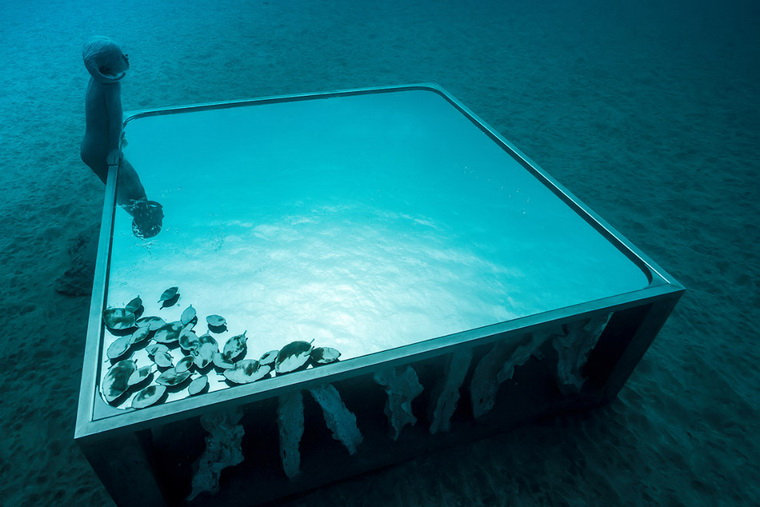 Actually deregulated means “deregulated”, but in our subjective opinion it would be more logical to call this installation “Swing”.

It looks like an ordinary child’s swing with some respectable guys sitting on it. The composition demonstrates the insanity and arrogance of the monetary world toward nature. 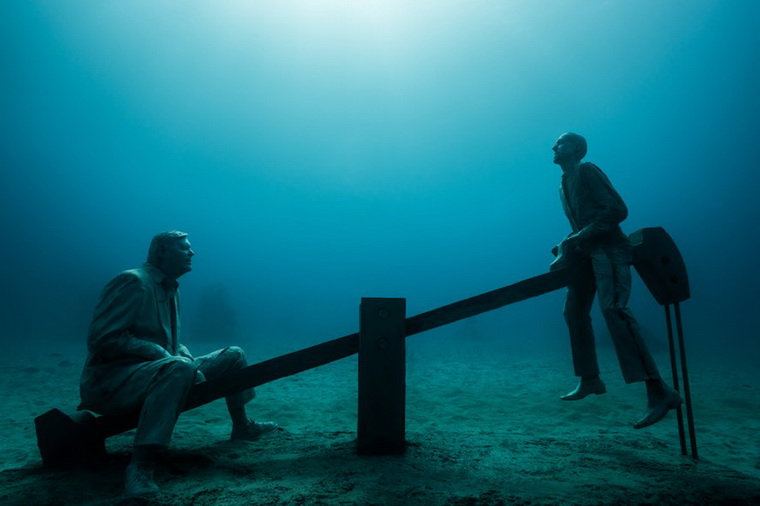 Here everything is more prosaic, these are the usual photographers, who are the symbols of the modern world of new technologies. 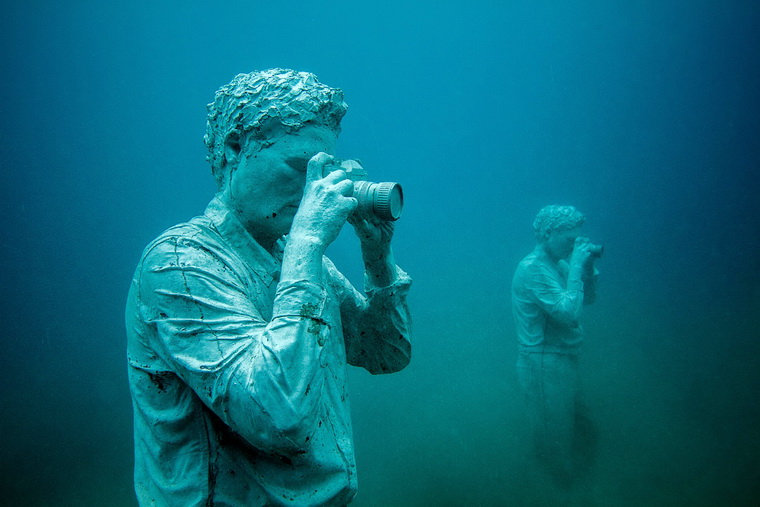 Perhaps the most impressive and controversial exhibit at the Atlantic is the Human Gyre. Here more than 200 human figures are piled in a circle, creating a surreal swirl of human bodies. Here we see people of all ages and from all walks of life.

In addition to the fact that this complex formation creates a habitat for marine life, this art installation is a reminder that we all evolved from the marine world, and are accordingly subject to the movements and will of the ocean. 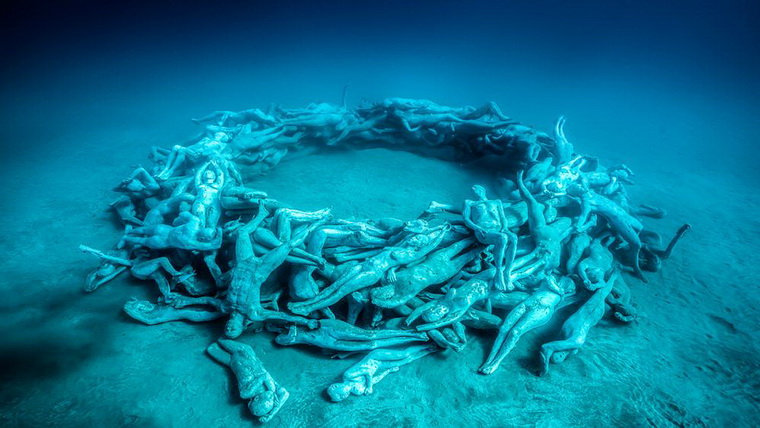 The best way to view the entire Atlantic Underwater Museum exhibit is with a scuba diver. You will literally touch the amazing world of Jason de Caires Taylor. You can also view the sculptures underwater using a special boat with a glass bottom.

READ
Bridge of Sighs in Venice.

In 2017, the amazing Atlantic Museum opened in Colorado Bay in Lanzarote, one of the larger islands of the Canary archipelago. The underwater gallery is spread over an area of about 2.5 square kilometers. Its exhibits are set at a depth of 12 to 15 meters – to get to the exhibition hall is only possible with a scuba diver or by buying a place on the sightseeing boat with a bottom of transparent material. 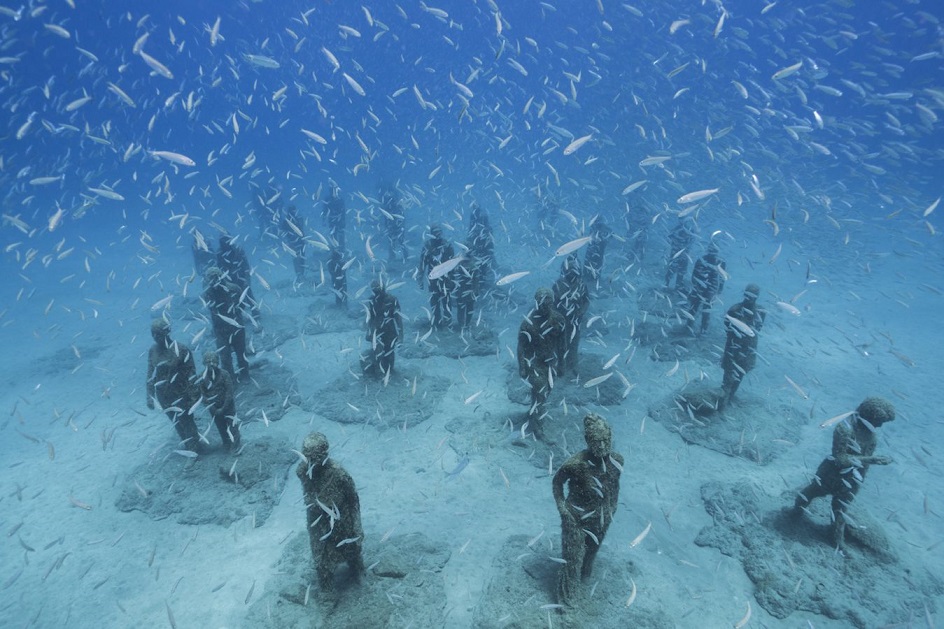 What is on display in such an amazing place? The exhibit includes works by British artist and sculptor Jason de Caires Taylor, who spent about three years on the island to create them. 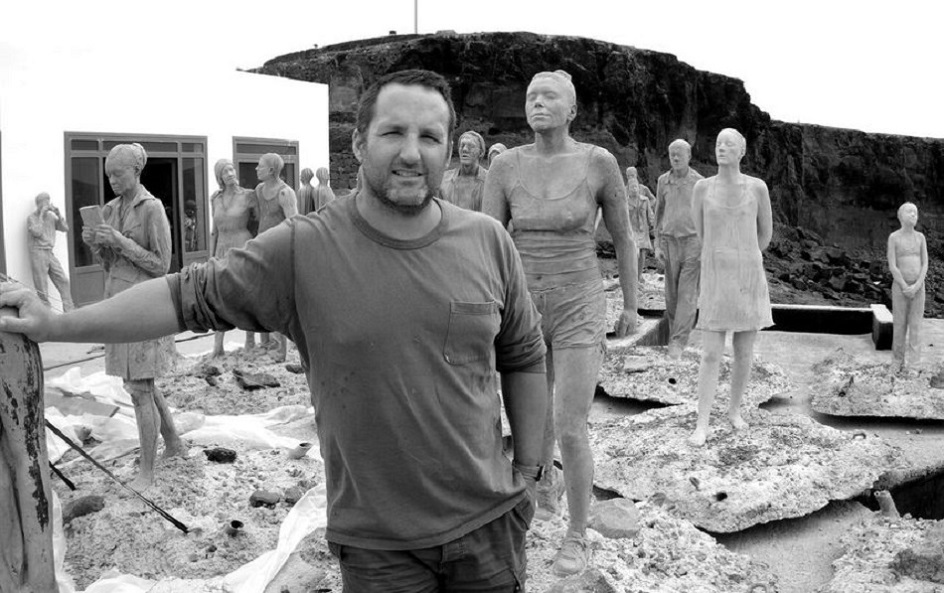 300 full-scale concrete sculptures prototyped by Lanzarote residents, as well as a 30-meter wall with gates now adorn the bottom of the bay, turning the already stunning underwater landscapes into truly fantastic ones. 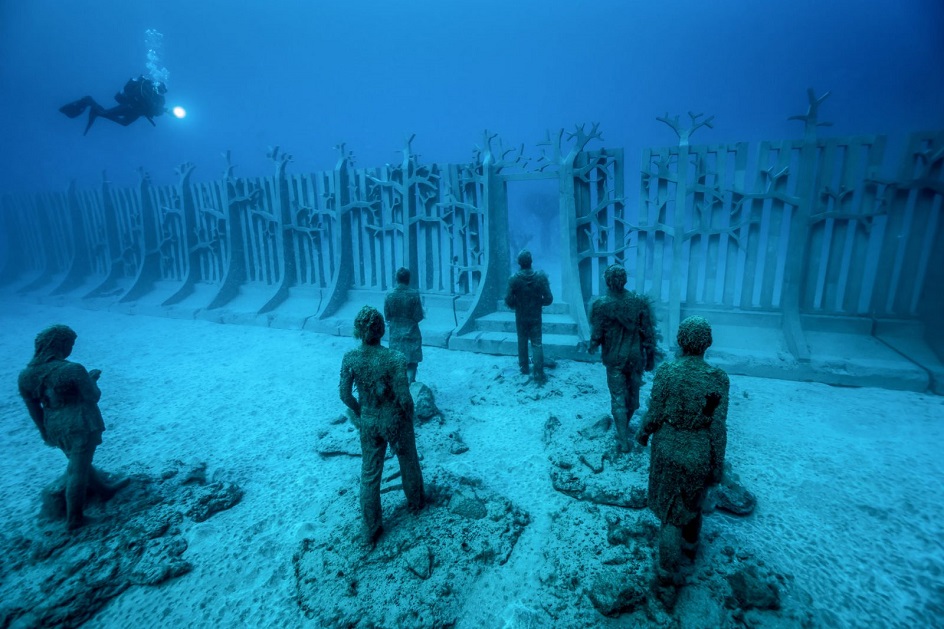 The main task of the museum, according to its creator, already famous as the creator of underwater parks and galleries, is to raise people’s awareness about the environment, draw attention to environmental problems and give understanding of collective responsibility for everything that happens on the planet. 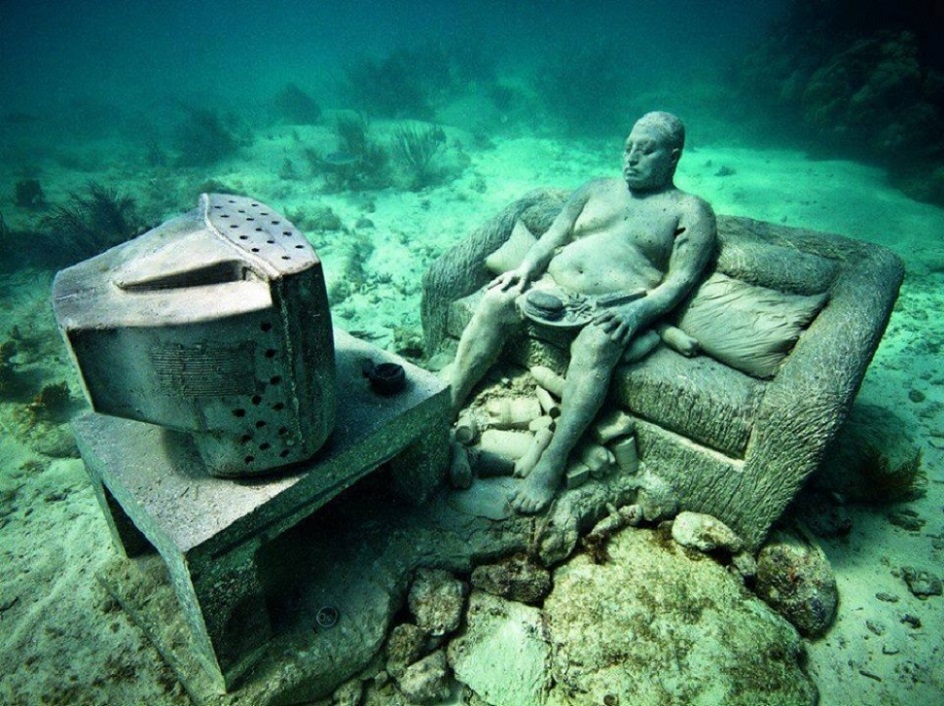 In the “Atlantico” exhibition, each of the 12 installations is extremely symbolic and metaphorical. Here is the largest one, “Crossing the Rubicon,” depicting a group of people heading for a gate in a huge wall. Some are staring into a gadget, most have their eyes closed. 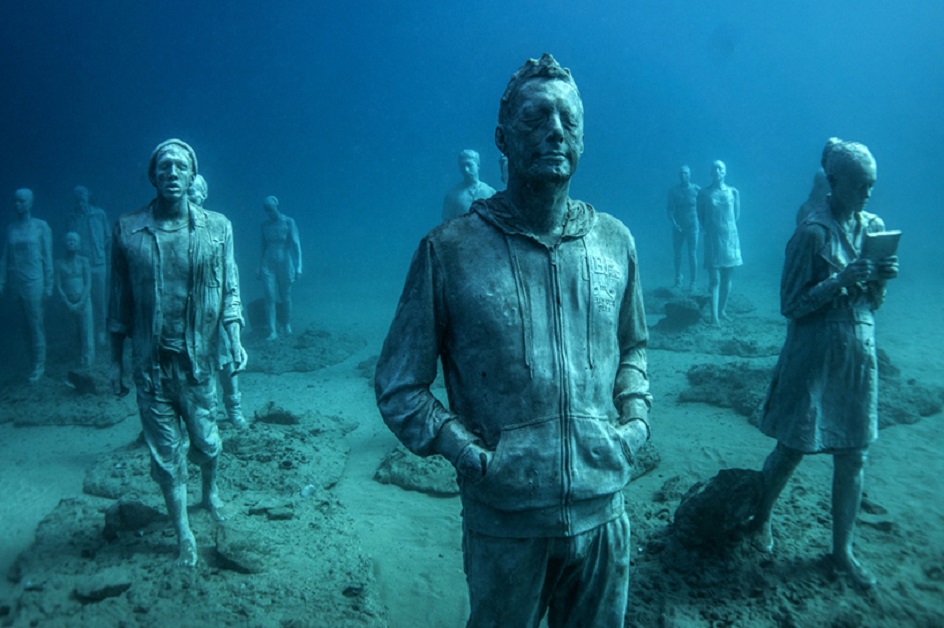 Not far from this installation is another, the refugee boat “Raft of Lampedusa.” 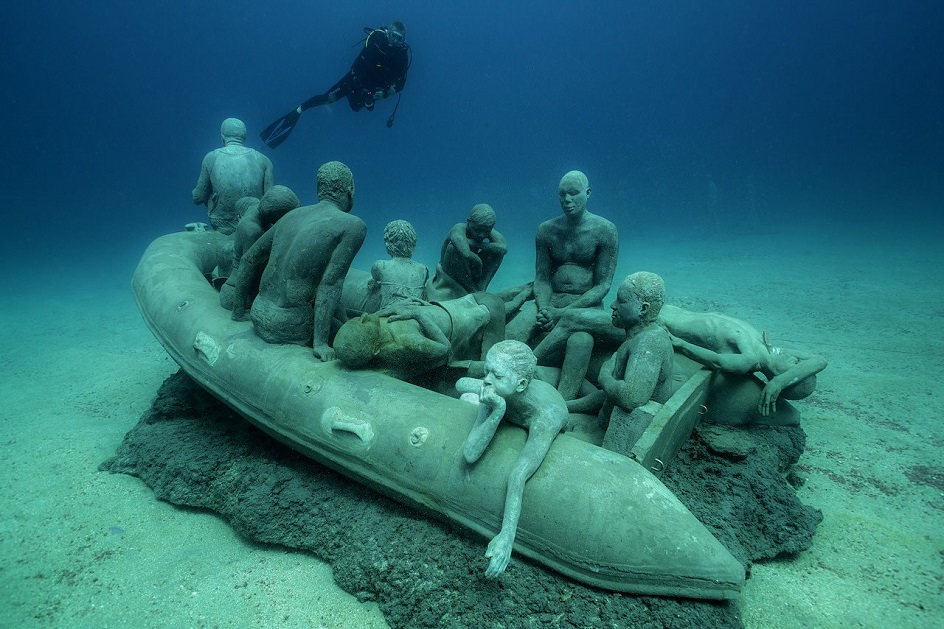 Here is a sculpture of a man lying on a funeral pyre. Nearby is the “Hybrid Garden,” depicting the fusion of man and nature. 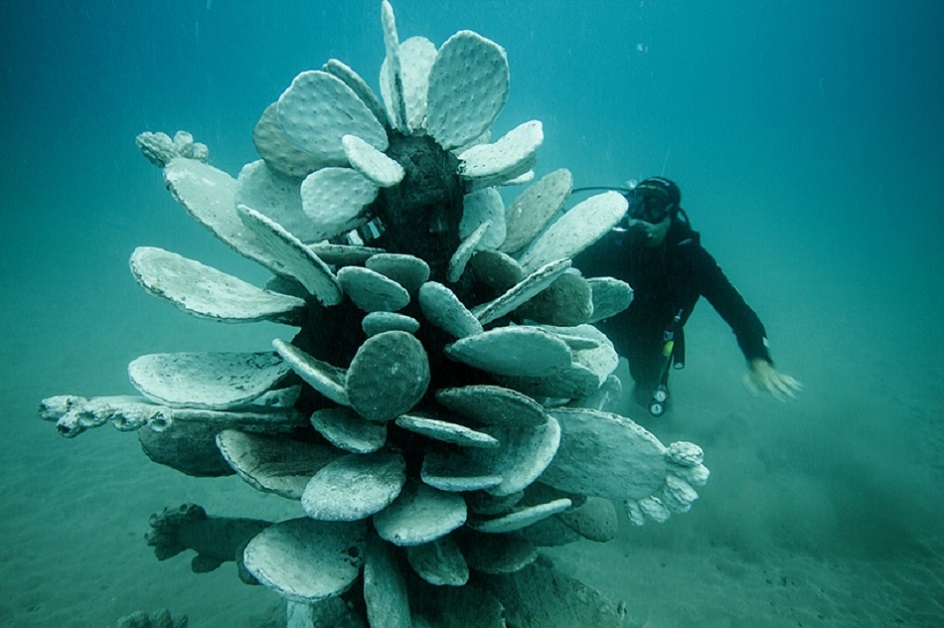 Here are businessmen in formal suits on children’s swings. Or is it an oil pump after all? 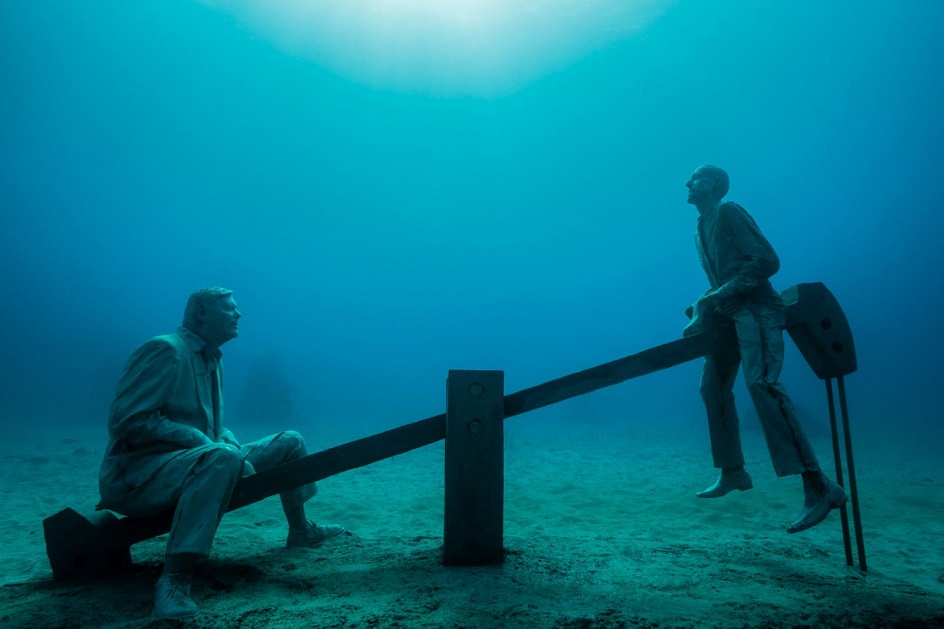 And the “Human Circle” is the most ambiguous composition of the exhibition. Two hundred human figures are arranged in a ring, in several layers. There are female, male and child sculptures. People of all ages and social strata in a single unbroken circle. 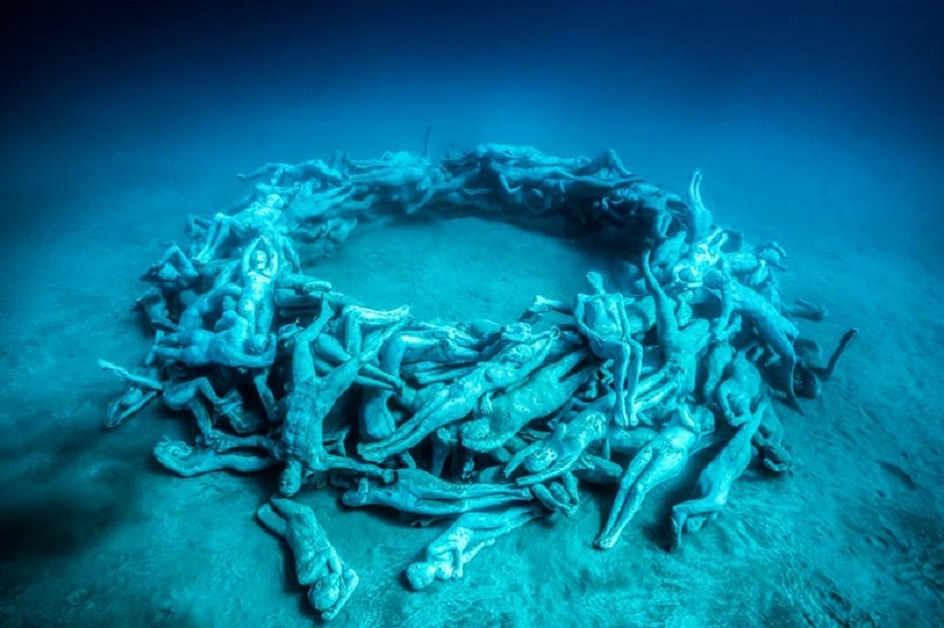 All sculptures of the museum are made of very dense PH-neutral concrete, which is almost indestructible in sea water, but at the same time is not harmful to the environment.

The artist plans that over time, the entire Atlantico collection of exhibits will turn into an artificial reef, overgrown with algae and inhabited by sea creatures. In fact, it is already happening-the first sculptures installed are already covered with sea plants, and angel fish, octopuses, menacing barracudas and flocks of sardines sometimes swim in to take a look at them.