There aren’t many waterfalls in Phuket in principle, let alone any large-scale sights that amaze the eye and the ear. Therefore, initially it makes sense to consider Phuket waterfalls rather just as a place to walk through the woods, but with the bonus – swimming in fresh water. Definitely, you should not expect an unusual spectacle from Bangphe. If you want really high waterfalls and spectacular views, then you have to go to the north of Thailand, where there are miles of mountains and hundred-meter waterfalls. However, for all this, the waterfall Bang Pae in Phuket is considered one of the biggest.

Bangpae Waterfall is only 15 meters high, but this is not just a number, but fifteen meters of steeply falling water, unlike most waterfalls in Phuket, which look like a cascade rushing over large rocks. Simply put, Bang Pae Waterfall is a classic of the genre, which looks very beautiful in photos and in person, it has a swimming pool, and overall, on the totality of the merits, it deserves a separate visit. From the parking lot walk along the path along the river bed for literally ten minutes, at a leisurely pace.

I note that the trail is uncomplicated, with occasional rises uphill, partially paved, so a person with any physical fitness can cope with trekking. As I said, the visit makes sense to consider just a walk in the jungle, although if you have been in a similar place before, such as Katu Falls, or somewhere on Samui, it will be the same. The same jungle and river. That is, if this 15-meter waterfall here in Phuket is the biggest, then you need to understand what waterfalls are basically on the island.

Since the trail goes along the river bed, on the way you will come across fonts of different depths and you will see for yourself which of them are bathing and which are not. I’ll give you a hint – everything is trampled around the bathing ones. By the way, while I remembered – the road to the attraction goes through a valley that is densely planted with rubber plantations. Keep in mind that if you go wild, you don’t want to wander into the gewea plantations – snakes like to hang out there. Also, there is an elephant farm on the way to Bang Pe waterfall where you can feed and ride elephants. Given the nuances of raising and training elephants, as well as their torn ears and hundreds of small scars on the head of the hook handler, these rides – for the amateur, of which I do not include myself. 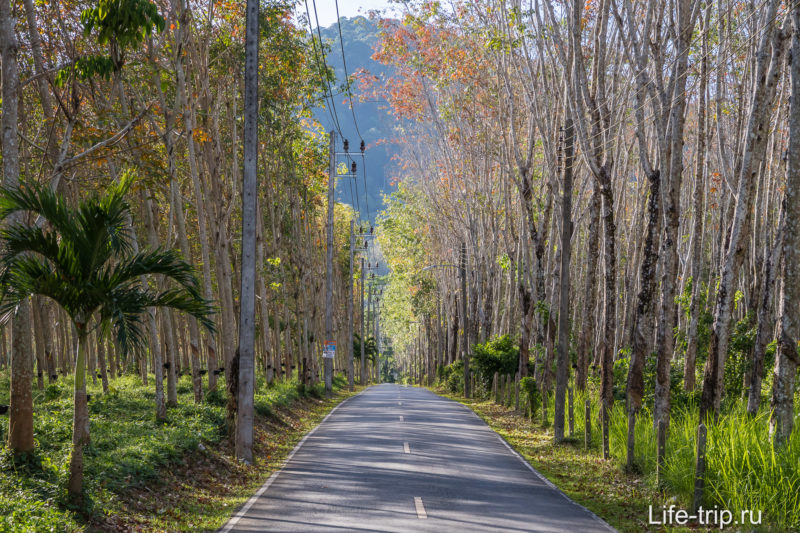 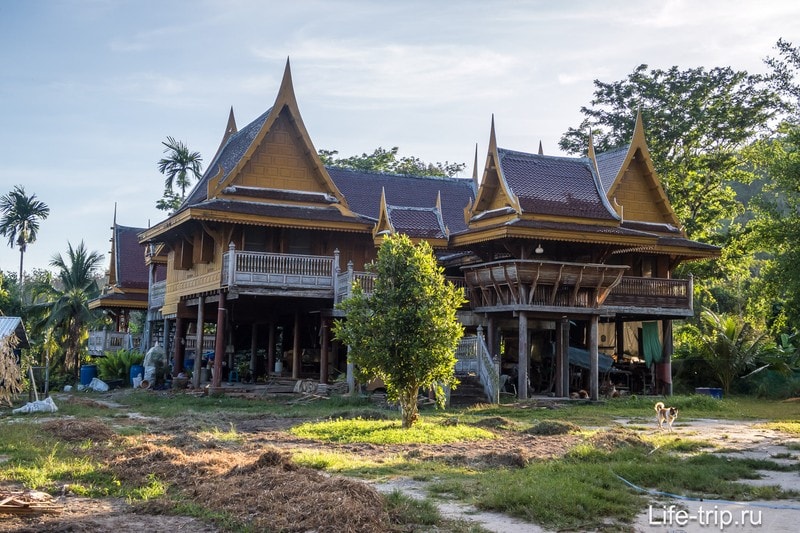 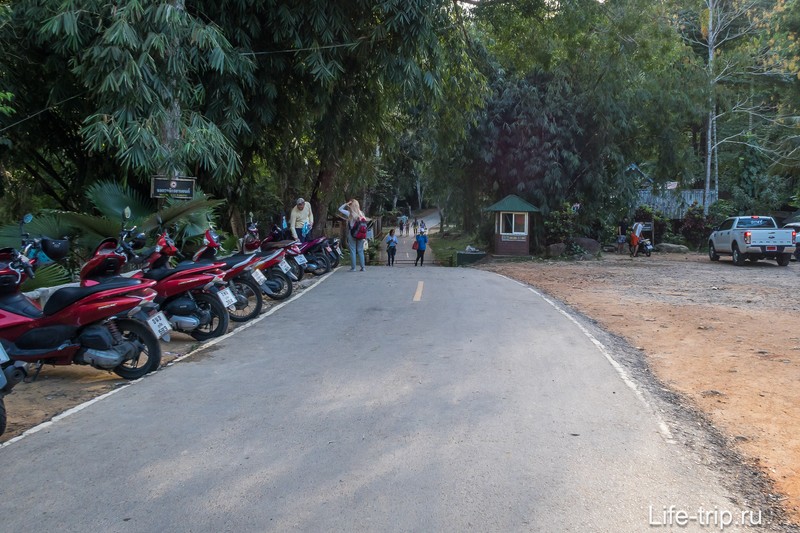 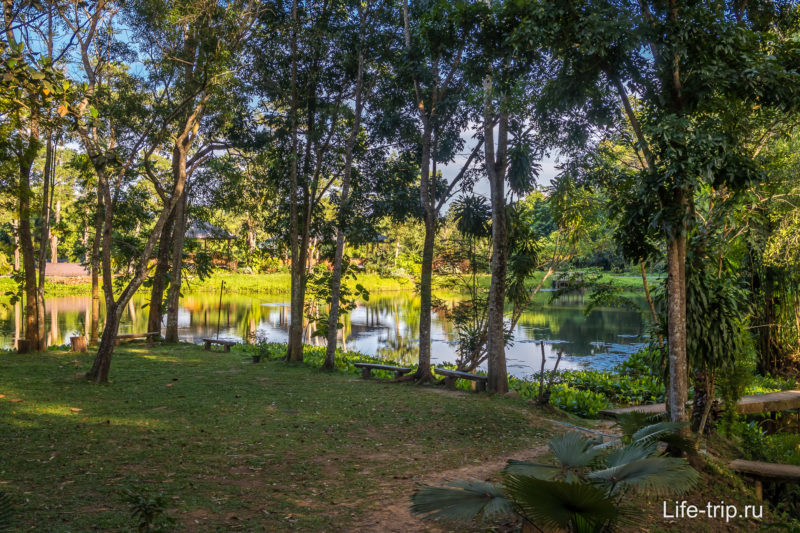 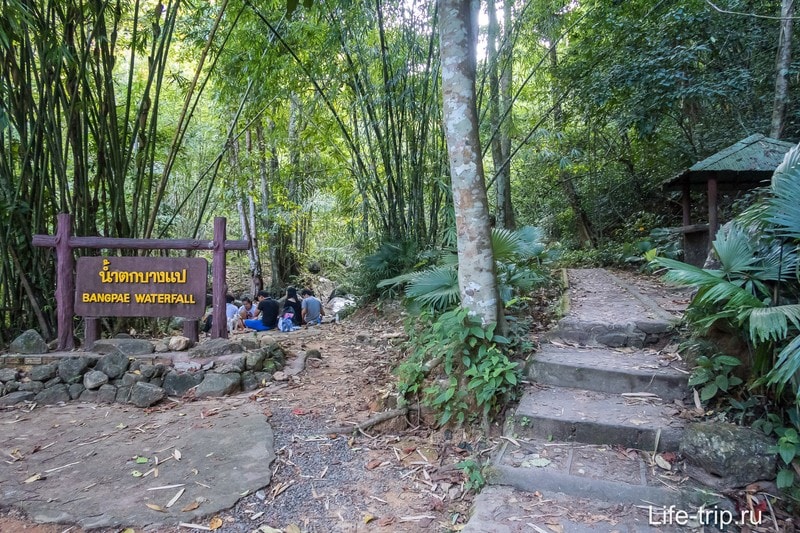 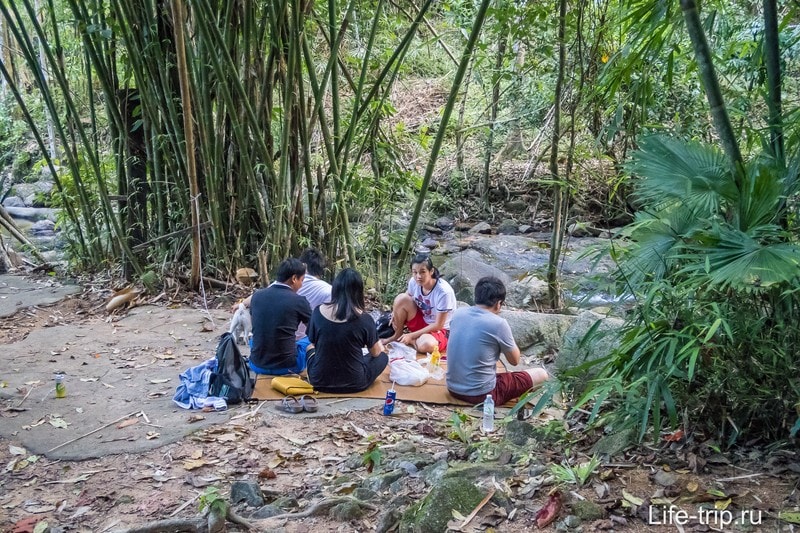 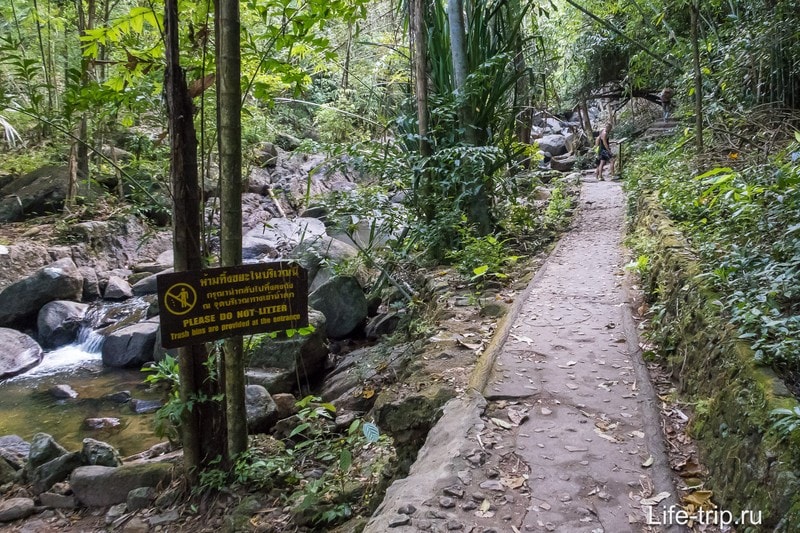 At the end of the trail you’ll come to a waterfall, there’s only one, and there’s a font near it. Moreover, in the place where water falls, the depth is more than two meters (not in the dry season, of course). Around this place is waist-deep. And the font is narrow enough, a large crowd there will not jump, and as tourists are found here in large numbers, you know, to bathe in proud solitude you do not threaten. On the way there are more pleasant and comfortable places just in terms of bathing. But this and only one place has a waterfall, where you can partially stand under the falling water.

I would also like to point out that if you come here to swim and spend time culturally – do not forget about the decency. This is the south of Thailand, there are a lot of Muslims, for whom swimming topless or in overly revealing bathing suits can be a shock, up to calling the police. The place is popular not only among tourists. Thais at Bangpe come in large numbers, and they usually spend their picnics with families and children. Despite the silly prejudices, they should be reckoned with, because the tourists here are us, not them. 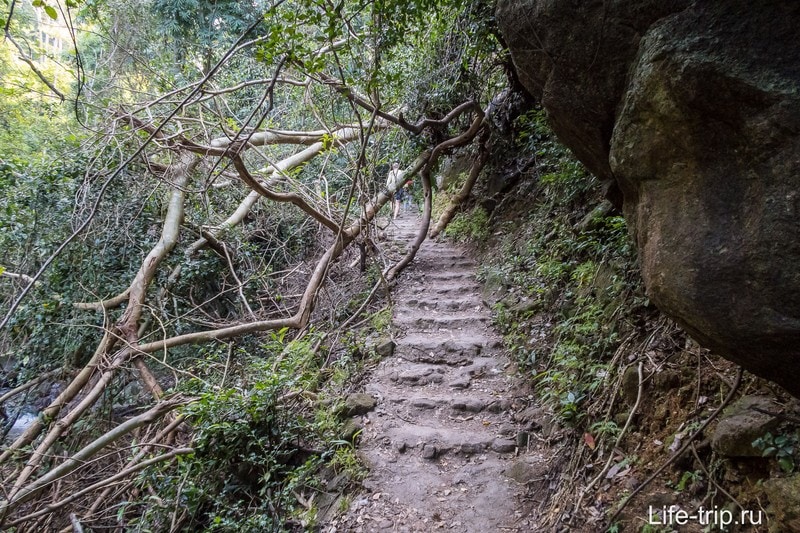 For 10 years, 16 hours a day, I made travel guides for travelers. 1.5 years ago, I was almost killed by a stroke. I survived, but am struggling with paralysis. 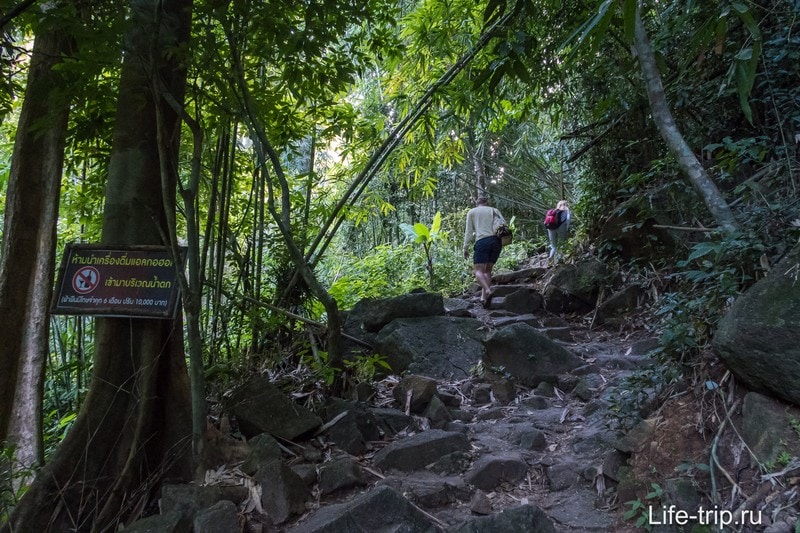 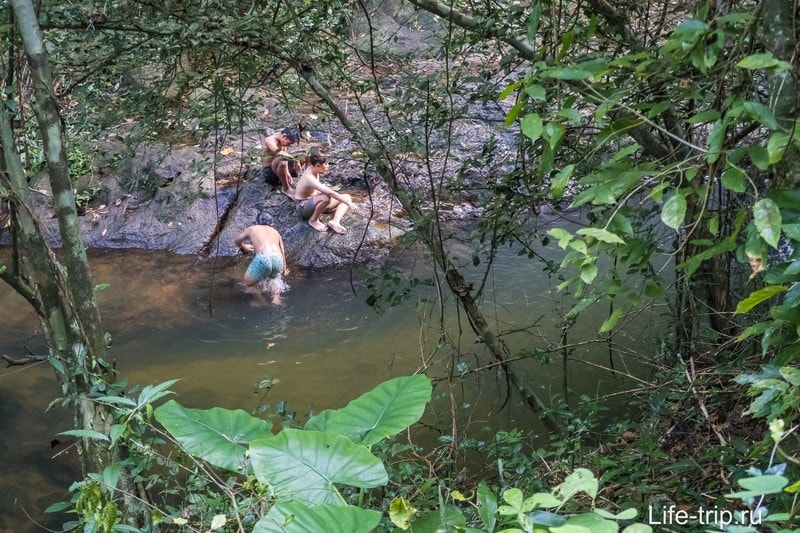 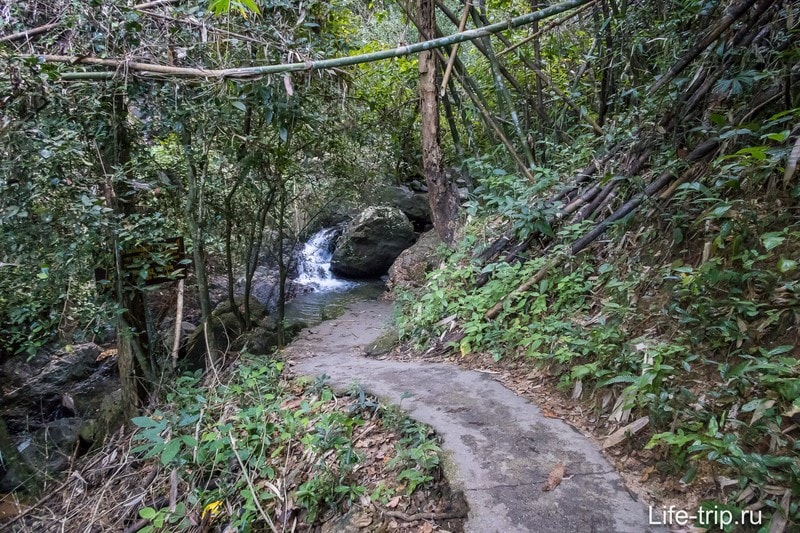 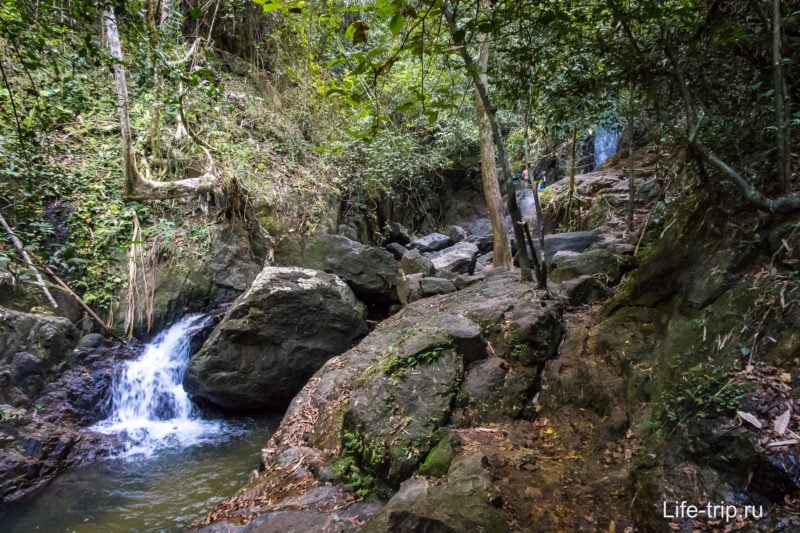 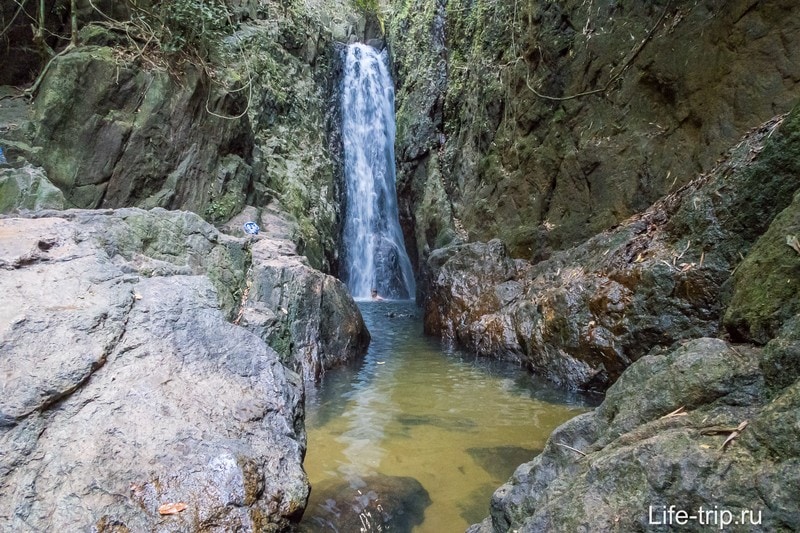 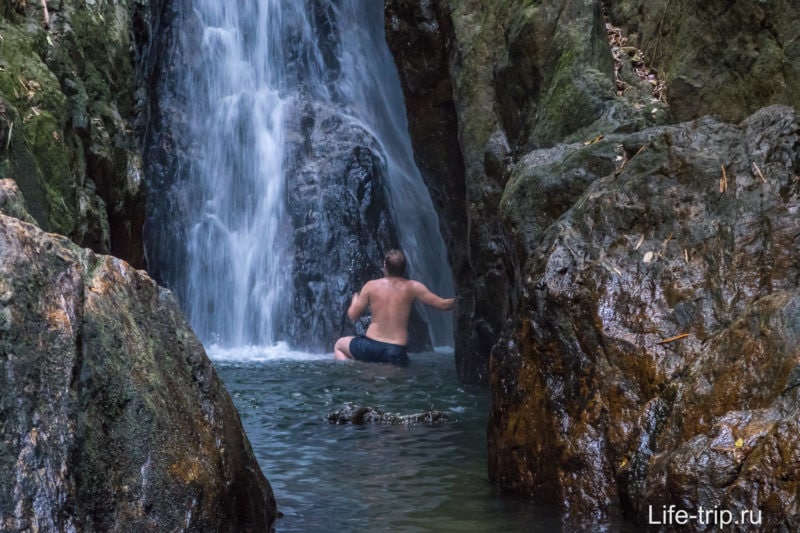 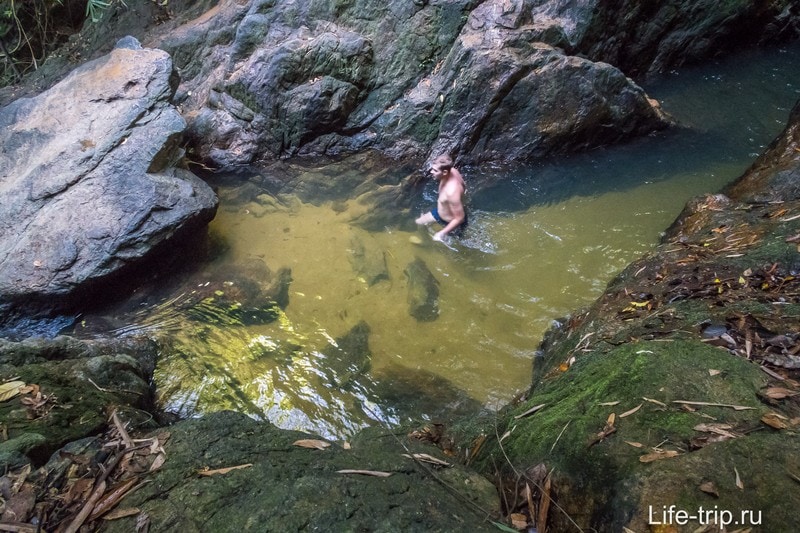 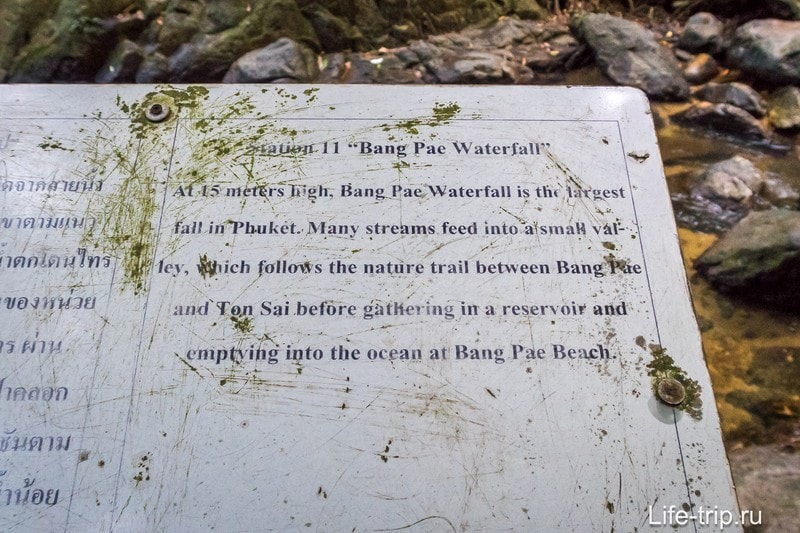 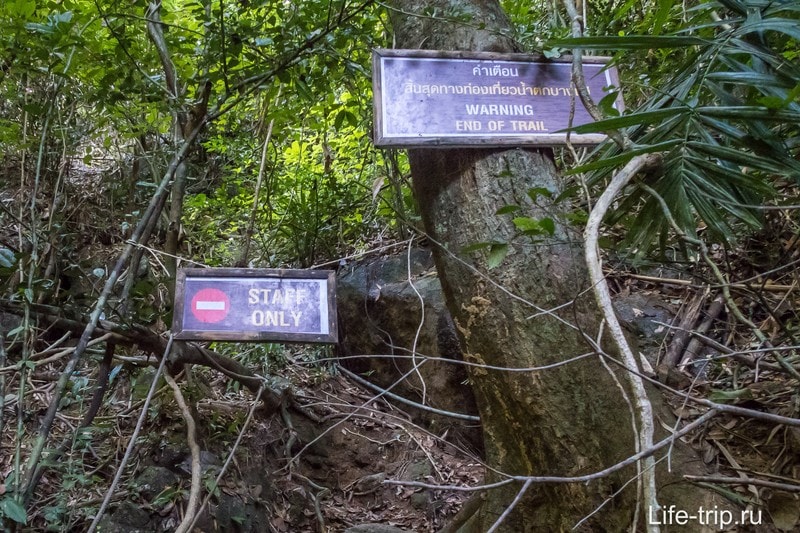 There is a rehabilitation center for gibbons before the entrance to the falls, I didn’t get there, but judging by the reviews there is not much to see, at best you will see gibbons from afar, they don’t let anyone close. Gibbons are confiscated from smugglers, illegal zoos, and simply from owners who mistreat animals. Of the sixteen species on the planet, four species of gibbons are found in the wild in Thailand.

The rehab center does not charge for admission, but does not refuse donations and offers a custodial service that will cost you 1,500 baht a year. 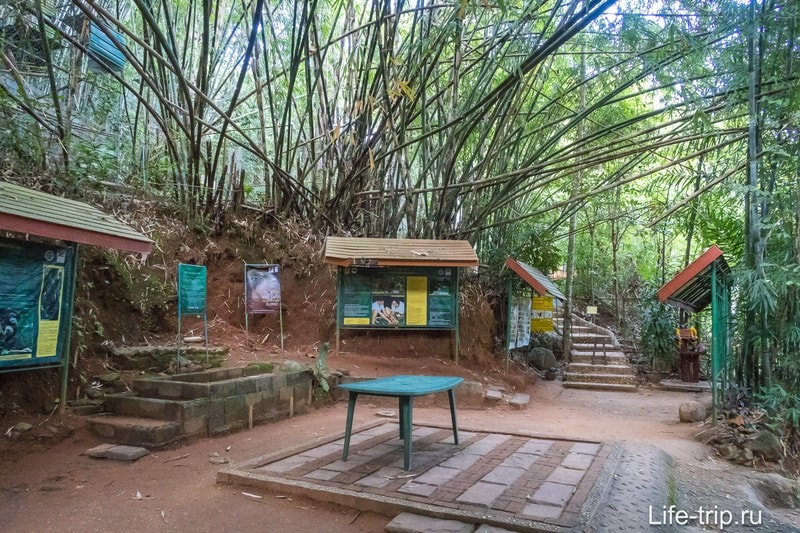 It costs 200 baht to enter the grounds with the Bang Pe waterfall. But I arrived at 16-45 and didn’t pay anyone anything anymore – there was no ticketeer at the booth, and I wasn’t the only lucky one. Think of it as a good luck tip for the thrifty. Moreover, at 5 pm there are not many people, you can hardly see the sun – it’s behind the mountain. And all in all – cool, nice and refreshing.

The gibbon center is open from 9 to 16-30 except Saturday, and the waterfall is open for entry from 9 to 17, but in fact I went out at 18, and people were still coming, that is, nothing is closed there and you can even come early in the morning quietly.

Bangpe waterfall in Phuket is located in the northeastern part of the island. If driving here from all the beaches, moving towards the airport, before reaching the Monument of the Heroine Sisters, you must turn right to the east coast. Google knows the place, and the navigator will take you there. On the way you’ll see signs that are hard to miss.

It’s hard to choose insurance, so here’s my top insurance in Asia to help you out. I am constantly reading the forums and use the insurance myself. From experience, the best place to buy in Polis812. They accept Russian cards.

Large database of hotels are on Yandex.Travel. Keshbek 10-30% points Yandex. Also need to check prices on the Russian copy of booking Ostrovka. All accept Russian cards.

Bang Pe waterfall is the largest in Phuket. Thailand

Phuket is one of the most famous islands of Thailand. Tourists love it for its gorgeous tropical nature and beautiful sandy beaches. In addition, there are many other attractions in Phuket. In particular, travelers and locals are attracted to its waterfalls. You can not say that there are a lot of them and they are high and majestic as Angel or Iguazu. But, nevertheless, they are of interest as wonderful places for relaxation.

The highest and largest waterfall of Phuket is Bang Pe. Its height is only 15 meters. If this is the biggest waterfall on the island, then you can imagine what the rest. But do not underestimate it. Still, it is quite an interesting place. 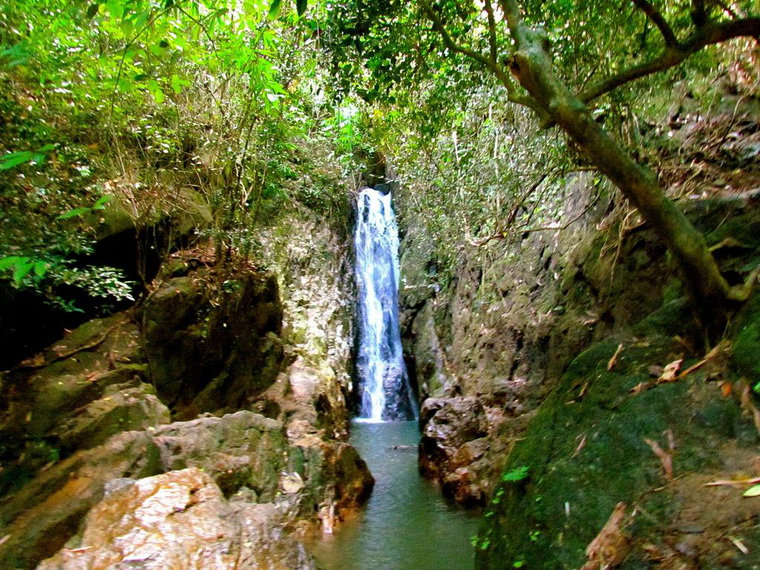 Bang Pe is located in the northeastern part of the island 2.5 kilometers from its east coast.

Bang Pe Waterfall on the map

Bang Pe is a relatively quiet and secluded area away from the standard tourist routes. 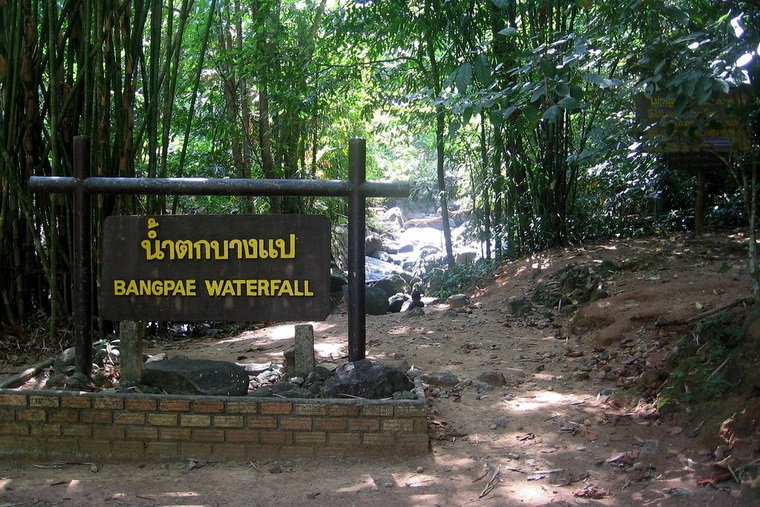 The difference between Bang Pe and its counterparts in Phuket is that it is a classic waterfall, that is, a stream of water falling down from a cliff. While most other waterfalls are water flowing over boulders, which is also no less interesting.

Bang Pe is a 10-minute leisurely walk from the parking lot. The trail is uncomplicated and tarmac and runs along the course of a small river. You should not go deep into the jungle, as there is a risk of meeting snakes.

So, after walking along the path, you get to the waterfall. It is unlikely to amaze you with its size and noise, but agree, it is still worthy of attention. 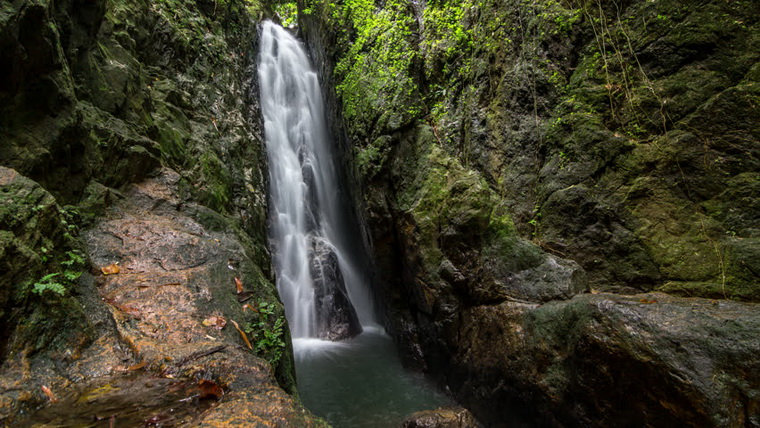 Tropical climate zone, in which Phuket in general and Bang Pa in particular, involves the change of the dry and wet seasons. So in the rainy season falls the most beautiful and plentiful water.

Bang Pe is one of the few waterfalls on the island, where you can stand under the jets of falling water. In addition, the small lake at the foot of the falls you can swim with pleasure. But there is not much space here, and the surrounding rocks are quite slippery, so be careful and cautious.

Access to the waterfall for a fee (200 baht for adults and 100 baht for children). But they charge from 9 am until 4 pm. If you come later, you can go for free. However, it is worth saying that the sun has already gone down and the day beauty of the waterfall begins to fade. It is better to visit it in the daytime. And the pictures will be more colorful, and swim at his feet is much more pleasant. 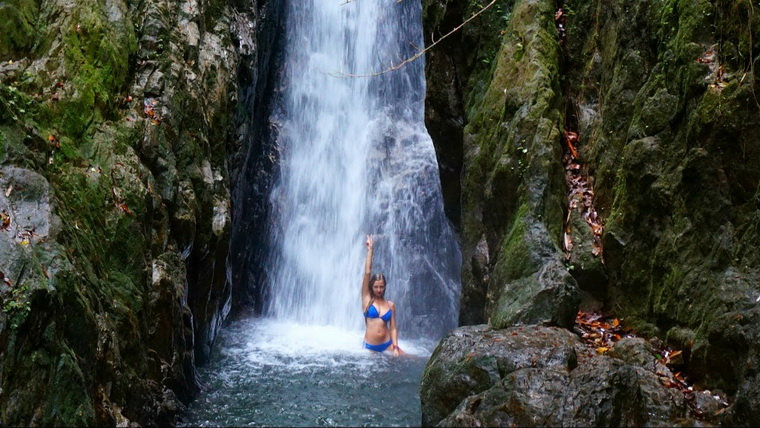 Local residents love to arrange in the neighborhood picnics and swim at the waterfall. It is worth considering the fact that in this part of Thailand, a lot of Muslims, so swimming topless or in too revealing swimwear is extremely undesirable. It is worth respecting the traditions and moral standards of the local population. 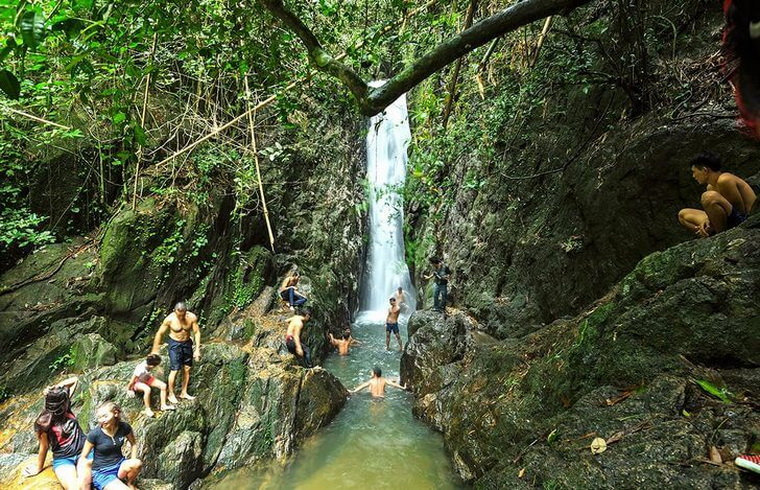 Both tourists and locals love this waterfall

There is an elephant farm and rehabilitation center for gibbons around Bang Pe Falls, where these primates live, confiscated from smugglers and underground zoos. Sometimes the animals are rescued from their cruel owners. Visitors to this center are allowed free of charge, but donations are not refused. You can learn about the lives of these animals from the information boards located nearby. You will not be able to pet a gibbon, but you can become a foster family for it, almost adopt it. They will not let you take the “stepson” with you, you will only be given a certificate of “guardianship”, which will cost 1500 baht per year (a little less than 3000 rubles). The center is open daily from 9:00 to 16:30, Saturday from 9:00 to 15:00. 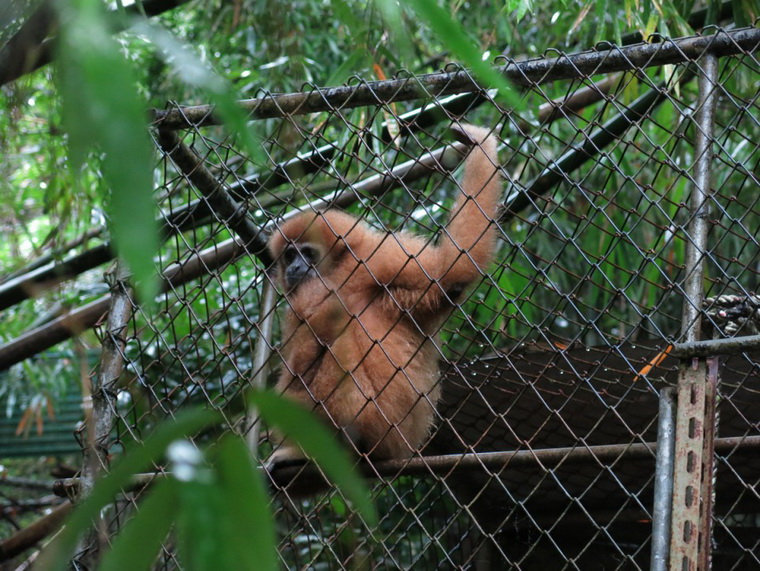 Gibbons at the rehabilitation center in Phuket

Bang Pe Falls can be accessed by road 4027. The starting point is the Sisters of Heroes Monument (Thao Thep Kasattri Thao Sri Sunthon Monument) in the central part of the island.

A brief historical reference. The monument is dedicated to two sisters who fought in the Burma-Siamese War (1785-1786). According to popular belief, in 1785 they led the defense against the Burmese for 5 weeks and proved so brave that they united the Siamese troops. 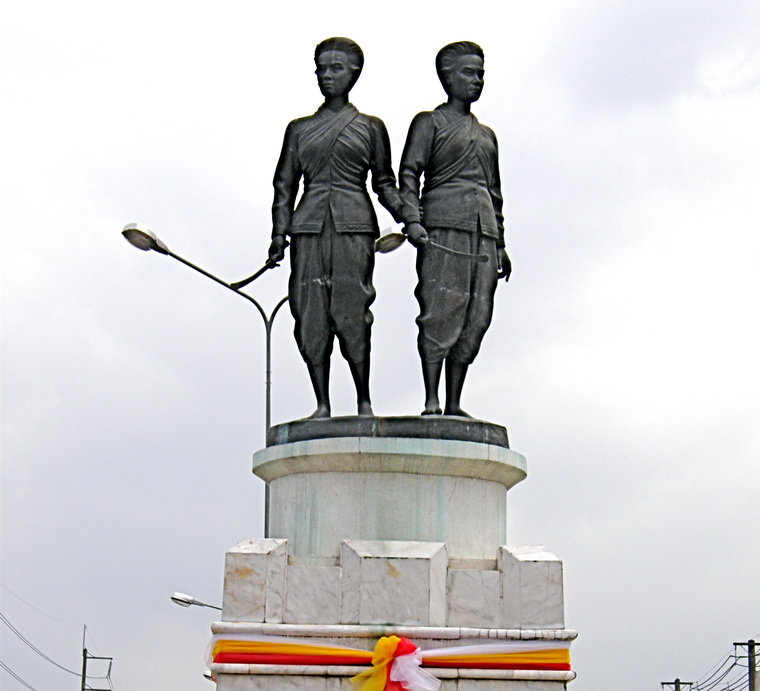 Monument to the Sisters of Heroes

At the Monument you need to turn off in the direction of the east coast and drive about 9 kilometers. Then turn left into an inconspicuous nook (follow the signs, there is a sign on the left side of the road for Bangpae Waterfall). You will drive about 1200 meters more and then you come to the ticket office and the parking lot. If you go slightly to the right, you’ll come to the gibbon sanctuary.