Barceloneta is a lively quarter of Barcelona’s Old Town, famous for its narrow streets, excellent seafood restaurants and the cleanest beaches of the Catalan capital, which are very popular with locals and tourists. Barceloneta or Little Barcelona was founded in the mid-18th century. It is built on the reclaimed land, which is a narrow triangle jutting out into the Mediterranean Sea. The area is characterized by a leisurely lifestyle, an attractive pedestrian zone and a picturesque green park.

Today, housing in Barceloneta is very much in demand among students. The reasons for this are the large number of libraries, sports fields, a modern sports center, green areas and the picturesque walking boulevard Joan de Borbo. Many people choose the coastal area because of the fresh sea breeze and because it takes only 10-15 minutes to reach the city center. Walking along the promenade of Barceloneta, it is not difficult to reach the tower of Saint Sebastian and take the cable car up to the Montjuïc hill.

The streets of modern Barceloneta resemble narrow grid-like corridors running parallel and perpendicular to the port. There are four plazas in the quarter, and all of the tourist infrastructure is located around the perimeter of the main development.

The oldest buildings in Barceloneta are more than 250 years old. At the western end, at Plaça de Pau Vila, 3, the former naval palace Palau de Mar is preserved. Today, there is a museum of Catalan history in the four-story stone mansion. In the center of the neighborhood, in the Carrer de Sant Miquel 39, stands the beautiful Baroque parish church of Sant Miguel del Port, built in 1755.

The history of Barceloneta

The development of Barceloneta began in the middle of the 18th century with the construction of a new marina, so first fishermen and seafarers settled in this part of town. The area was considered quite poor, and its inhabitants lived in barracks without any amenities.

Then the authorities decided to build capital houses in Barceloneta. The design of the new quarter was prepared by the Dutchman Prosper Verboom. It envisioned straight streets and alleys, built up with buildings of the same height with similar facades. It is noteworthy that despite subsequent adjustments and renovations, the neighborhood has largely retained its original appearance.

In 1992, before the 1992 Olympic Games, the host city of Catalonia, Barceloneta was renovated and landscaped. The industrial plants and warehouses that had existed there were closed, and Barceloneta became one of the tourist neighborhoods of the city.

The beaches at Barceloneta

The sea coast is divided into four beaches – San Sebastian, San Miguel, Barceloneta and Somorrostro. The sandy beach of Barceloneta stretches from the Olympic Port to the Carrer Almirall Cervera for 1.1 km. Its width is 89 meters, so there is enough space for everyone.

Thanks to the excellent infrastructure, the beach of Barceloneta suits both families with small children and young people. There are many good restaurants, bars and cafes along the beachfront. There are toilets and showers on the beach, a team of lifeguards and local police are on duty every day in the summer, and the season opens different activities for children. Those who want for 10 € can rent a deck chair and a sun umbrella and get a massage. For those who like active rest, there are volleyball and indoor soccer facilities on Barceloneta beach. Behind the sandy strip there is a long promenade where rollers, skateboarders and cyclists hang out.

San Sebastián beach adjoins Barceloneta beach to the south. It is the largest in the neighborhood. The beach of Somorrostro is located near the Olympic Port. It is 0,5 km long and can be recognized by the original sculpture Fish.

The museum, which tells the history of Catalonia since ancient times up to the XX century, was opened by the government in 1996. The museum building is the oldest building of the seaport and was renovated in 1992.

READ
Asian resorts and all the pros and cons, photos and descriptions

In the spacious halls are exhibited findings of archaeologists, medieval weapons and coins, maps and old photographs. Seasonal exhibitions are also held here. Many of the exhibitions are interactive in nature. Guests of the museum can try to grind grain with a hand millstone or cut the skin of an animal with a stone knife.

As a true fishing quarter, Barceloneta is known for its excellent fish cuisine. Grilled fish, paella and fish and seafood fideuas, clam dishes and other culinary delights surprise even the most experienced gourmet. There are many fish restaurants along the boulevard Joan de Borbo, known as the “main street” of Barceloneta.

The most popular restaurant “Can Majo” is on Carrer de l’ Almirall Aixada, 23. Here you can try risotto with cuttlefish ink. Despite the fact that the prices in this restaurant are high, it is very popular with the residents of Barcelona and tourists, so you should reserve a seat there in advance. In the old restaurant “Ramonet” the tables are made of big wine barrels, and noisy and cheerful restaurant “Casa Costa” is chosen by those who like dishes prepared according to old recipes of traditional Catalan cuisine.

Many tourists who come to Barcelona prefer to cook at home. Fresh produce is sold in small stores, supermarkets like DIA, Caprado and Condis, and in the Barceloneta market in Plaça Poeta Bosca.

Barceloneta stretches between the main port and the Olympic Village. The block starts from Boulevard Joan de Borbo and ends at Avenida Maritim. It is easy to get here on foot from the Barceloneta or Ciutadella Vila Olimpica metro stations. There are also buses 36, 45, 59, D20, N0, N6, N8, N28, V15, V27 to this part of town.

READ
All the beaches of Phuket, where to rest best 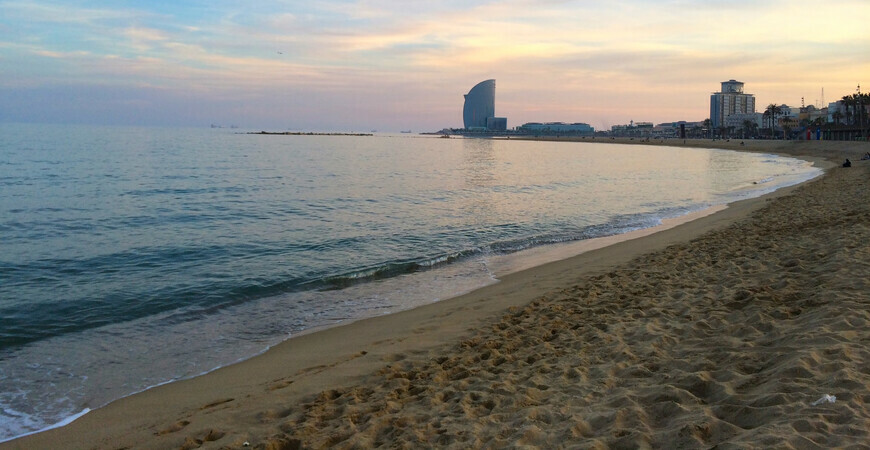 Barceloneta is not only a whole area of the city, attracting tourists with its promenade and port with snow-white expensive yachts, but also a beautiful public beach. It is considered one of the most popular places for recreation among tourists and locals. In the warm season here actively bathe citizens. Thanks to its vast area, the beach can accommodate a large number of vacationers, and they will not feel discomfort.

In the morning many people run out for a jog along the surf line, and in the evenings on the beach street music bands and artists often play. It also acts as a venue for city-wide events and concerts. It is always crowded and interesting to stay here.

Visitors have all the necessary conditions for recreation and entertainment. Visually, its territory can be divided into parts, each of which is separated from the other by stone embankments extending dozens of meters into the sea. To check the status of the beach you can use webcams installed nearby.

Barceloneta is a public beach with free access around the clock. It is completely sandy with a comfortable smooth entrance to the water. It has the necessary free infrastructure for bathers and sunbathers: showers and public toilets. There are no cabins for changing clothes. As an alternative, the beach clubs located in the northern part of Barceloneta are often used. They have a storage box for 2 euros.

Beach equipment rentals are located in various parts along the coastline. They charge extra for sun loungers and sun umbrellas. The average price for a set is 11 euros per day. For active pastime on the sand volleyball nets are stretched and installed tennis tables. Also here you can find partners in the game of soccer. There are convenient concrete sites for rollerblades and skateboards. Children’s recreation is organized in separate areas with swings and all kinds of small rides.

Safety on the water is closely monitored by a special squad of lifeguards, including medical staff on duty to provide emergency assistance. Barceloneta beach attracts visitors even at night. As the sun goes down, the evening lights come on on the beach, but at the same time, municipal beach cleanup workers show up.

Have a refreshing drink or a snack at any of the nearby cafes, bars, and pizzerias on the sand or at the edge of the alley of palm trees. In the area of Passeig Maritim de la Barceloneta there are Bicing public bike rental stations. They are rented for an hour or a whole day and ride along the entire coast, admiring the beauty of the sea. Tourists who want to stay near Barceloneta Beach can use the hotels in the area.

In the past, the beach of Barceloneta, as well as the area of the same name, had a depressing appearance, because this place was first a fishing village and later an industrial area with large factories and the seaport. It got its present appearance thanks to the Olympic Games in the 90s. Then the government decided to move all manufacturing companies from the area. Also conducted large-scale cleanup activities on land and sea floor.

Now the beach can be considered exemplary. For the cleanliness of the shoreline it received a special Blue Flag award. Barceloneta is the oldest public beach in the city. Over the decades it has become popular with both locals and visiting tourists. Barceloneta is a very interesting attraction and is one of the top beaches in the world.

The famous Barceloneta beach is located in the eastern part of Barcelona. Its coastline runs parallel to the main seaside promenade for five kilometers. It borders Somorrostro Beach and the Olympic Port to the north and Sant Miguel and San Sebastián beaches to the south, where there are nudist areas. Getting to the Barceloneta area is easy. The beach is connected to the entire public transport infrastructure. The city center is about a 15 to 20 minute drive by car or cab.

READ
Beaches of old Goa, How to get there and where to relax

The closest metro stations to Barceloneta Beach are within walking distance of the Estacio de Franca train station. There are two stops on the yellow L4 Metro line, the Barceloneta and Ciutadella Vila Olimpica. The distance from them to the sea can be covered in about 12-16 minutes. Travel along the Passeig de Joan de Borbo or Carrer de Ramon Trias Fargas, respectively.

Public land transport stops are located on the coastline along Passeig Maritim de la Barceloneta, which runs parallel to Barceloneta Beach. There are several of them here, you can get off at any of them and then walk to the place you like. The stop of the same name is called Platja de la Barceloneta. You can get to it by the following buses: Nos. 47, 59, D20, N28.

Another type of land transport is the streetcar (Trambesos). The nearest stop is five minutes from the metro station and is called Ciutadella | Vila Olimpica. The line leading here from Estacio de Sant Adria is number T4. The bus stop will take you to the beach in about 20 minutes.

Travelling around Spain by rent a car, you can easily get to any point in Barcelona. If you drive from the Sagrada Familia Cathedral, you will reach your destination in about 15-20 minutes, depending on traffic congestion. The distance between the sites is almost four kilometers. You should go in a southeasterly direction along the Carrer de Sardenya.

You can easily get from the center of Barcelona to Barceloneta Beach in a city cab. Their cars are usually painted yellow and black. On average, the trip will cost about 11 to 15 euros, depending on the distance from the coast.