Museum-diorama “The Battle of Kursk. Belgorod direction” is located in the city of Belgorod and is dedicated to Prokhorov tank battle.

History of the construction of the Museum-Diorama in Belgorod.

Construction began in December 1984, and it lasted only a year. On the most significant holiday, May 9, 1985, the Hall of Military Glory of the Belgorod Museum-Diorama received its first visitors. It housed a temporary photo exhibition. Then the museum was closed again for the completion of internal works in the rest of the building, as well as for the creation of the canvas and the subject plan of the diorama. For two more years the sculptors worked with historians and artists to complete this intricate work. The creative team for the creation of the canvas included N. But, G. Sevostyanov, V. Scherbakov, M. Sychev, G. Koltunov. And finally, on August 4, 1987 everyone could see the incredibly difficult and at the same time spectacular diorama of the Battle of Kursk.

In 2008, in the building of the museum-diorama in Belgorod sensory kiosks were opened, thanks to which it became possible to learn the forces and the composition of the warriors, biographies of the commanders and ordinary soldiers in more detail. The Belgorod museum also holds detailed information about the types of weapons and equipment and the soldiers’ everyday lives. Over the draft building of the museum-diorama “The Battle of Kursk. Belgorod direction” worked team institute “Belgorodgrazhdanproekt”, which included the chief architects of the city and the designers V.P. Veselov, S.S. Mikhalev, V.V. Pertsev.

The building of the museum-diorama “The battle of Kursk” is designed in a semi-circle, placed on a high foundation. If you look from a distance, the building resembles a white sail, developing in the wind. The legendary Soviet tank IS-3, a self-propelled artillery unit ISU-152, mortars and an antitank gun are placed on small pedestals in front of the central entrance.

In front and behind Belgorod Museum-diorama there are viewing platforms, lawns and alleys with wooden benches. In front of the central building in the park installed busts of heroes of the Battle of Kursk.

The area of the museum-diorama “The Battle of Kursk. Belgorod direction” is a total of 1477.2 square meters, plus another 2 hectares of parkland. The museum itself is divided into several departments: scientific-exhibition department, sector of exhibition works, department of funds registration and storage, department of information technologies, engineering and technical, archive and library.

The diorama “The Fiery Arc” is the main and the largest in the museum. This is a unique canvas, the area of which is 1005 m2, and the subject plan – 500 m2. Everything is thought out here down to the smallest detail. The diorama reproduces the events of the Prokhorov tank battle.

The diorama is made in a curved, semi-circular form. It depicts a picture, in front of which are arranged structures, as well as real and props. Artificial lighting is made so that the viewer can feel himself a participant in a tank battle. The canvas with the composition of the painting is fully woven, it was made by Sursky industrial textile mill especially for the diorama. The creative idea of the authors of the canvas was to convey the complexity of the Prokhorovka battle, to show the incredible heroism of Russian soldiers who defeated the enemy at the cost of their lives on July 12, 1943. Prokhorovka tank battle was a turning point in the defense of the Kursk Bulge. Thanks to the huge size of the diorama artists were able to depict practically the whole battle, the incredible scope and intensity, the heroic deeds of ordinary soldiers and skills of commanders. Soviet pilots, artillerymen, medics and signalers played an important role in the battle. Without these people it would be difficult to imagine victory in Prokhorov tank battle. 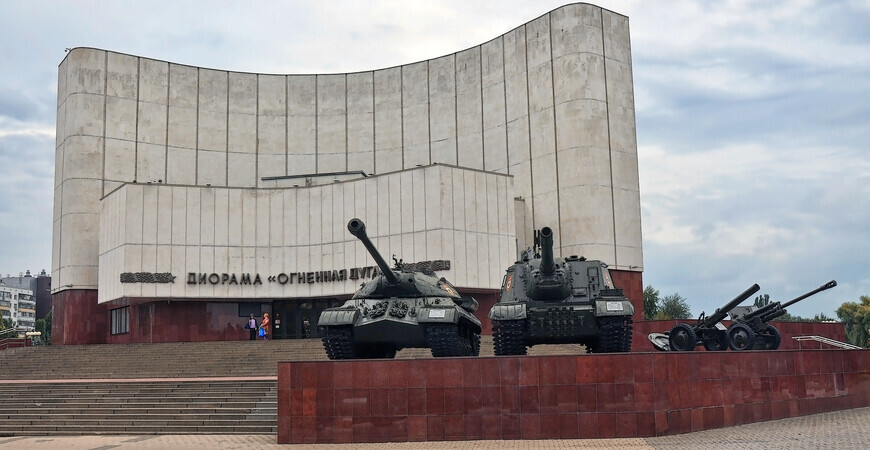 Belgorod State Historical and Art Museum-diorama “Battle of Kursk. Belgorod direction” (Fiery Arc) is the most visited museum of Belgorod. Dedicated to the largest tank battle – the Battle of Prokhorovka. The museum building is made in the form of an arc on a high plinth. In front of the museum there is an IS-3 tank, a self-propelled gun ISU-152, and three mortars.

In 1984, the construction of the museum began, especially for May 9, 1985 by the Victory Day was held a temporary opening, which was a photo exhibition dedicated to the heroes of the Second World War – the Hall of Military Glory. Then it was closed for renovation and artistic works on the diorama “The Fiery Bulge” and only in August 1987, the museum finally opened its doors to the public. In 1993 the permanent exhibition “On the Land of Scorched Land” was established.

Museum-diorama “The Battle of Kursk. Belgorod direction” attracts the attention of the inhabitants of the city, region and all over the country. Here are organized tours and themed events, film festivals and memorial days, meetings with young people and the day of the conscript. Theatrical holiday “Let’s praise those great years” with preparation of soldiers’ porridge is very popular with Belgorod residents and guests of the city.

The Fiery Arc Diorama is the largest diorama in Russia. Its conceptual and artistic idea is based on the Prokhorov Tank Battle of July 12, 1943, the victory of which was a turning point in the Battle of Kursk.

The area of the canvas painting of the diorama is 1005 m² (length – 67, height – 15 m). It is a unique whole-woven canvas, made at the Sura Combine in the Penza region, which was originally intended for the Bulgarians and by a happy coincidence fell into the hands of the museum founder Evgeny Savotchenko. Between the painting and the observation deck there is an object plan of the area – it is almost a detailed reconstruction of the battlefield, which occupies more than 500 square meters. Viewing angle 230 degrees. Artists have reproduced the events observed from a height of 252.2 meters. It is recommended to look at the canvas from right to left, only then you can see the battle in full from the beginning to the end. Although the images of soldiers are collective, but the picture depicts real people.

The dimensions of the diorama allowed artists to depict the total picture of the battle, to show its scope, heat, military skill, courage and heroism of tankers, infantrymen, artillerymen, pilots, armored men, signalers, medics and other soldiers of all kinds of troops.

In 2009 the canvas of the diorama “The Fiery Arc” became the winner in the regional competition “The Seven Wonders of Belgorod Region” in the category “Pictorial Art”.

Since the opening of the diorama the museum workers and historians have been constantly working on collecting and updating the exhibits, searching and clarifying the historical facts of the event. Due to this fact, in 1993 there opened a permanent exhibition “In the Land of the Disgraced” with the area of 1280.9 m².

It presents documents, weapons, decorations, photographs, personal belongings, maps, diagrams, materials that familiarize visitors with the military and strategic situation on the Soviet-German front before the Battle of Kursk.

All this recreates the image of the defenders of their Fatherland. The museum has a hall devoted to the second liberation of Belgorod.

In 2007, a touch-screen information terminal with a description of the military situation of those years and specifically the Battle of Prokhoro (detailed biographies of the commanders and participants, the composition of the German and Soviet armies, description of weapons and equipment of the battle participants), the electronic memory book with access to the Defense Memorial database site were installed.

The museum exhibits temporary displays of military history and art topics. The room for temporary exhibitions occupies about 124 m².