Bayon, a temple with huge stone heads found at every turn, is the jewel of Angkor Thom. In total there are 216 heads on the 54 towers of the temple. If you look closely, there are no identical faces – they are all very different, although at first glance they look similar. Depending on the light and time of day, the faces can be cheerful and kind or sad – and even horrifying. No matter where you are in the temple, at least five or six stone faces will be “looking at you.

Who is depicted on the faces in the Bayon Temple is not known for certain. Some sources believe it is Avalokiteshvara, the bodhisattva, the embodiment of boundless compassion in Buddhism. Others believe that the statues represent King Jayavarman VII himself. The latter theory is supported by the clear resemblance between King Jayavarman VII, whose portrait is kept in the Guimet Museum in Paris, and the stone faces on the Bayonne towers. There is also a theory that unites the two versions, that it is Avaloki Teshwara and that the king was the model for the sculptures. From afar, the temple is not particularly impressive; it seems compressed within a limited space, a stone chaos. This impression is created by the galleries on the sides of the temple and the upper terrace, between which there is almost no free space. But go up to the upper tier, sit between the stones, and you can feel that you are sitting somewhere in heaven, among the ancient gods. No other temple in Angkor has such a stunning atmosphere as the one at the top of Bayon. Spend at least half an hour here in the morning, try to feel this wonderful feeling.

At the top of the temple in the morning, while there is no heat, you can often see students stacked with books, or Europeans who came to Cambodia for a few months or years, with a book in hand. It’s hard to imagine a better place for a few hours of study or relaxation than high above the jungle. The bayonne consists of three finished tiers, the lower two being square, the upper one being a circular tower. King Jayawarman VII wanted to finish the temple in his lifetime, but was not sure he could wait until the end of construction, so on his orders, craftsmen completely finished each tier and only then began to build the next.

READ
The My Son Temple Complex in Vietnam, description and photos

The walls of Bayon are covered with intricately carved bas-reliefs, on 1200 meters of surface of the stone carved 11,000 figures depicting various scenes of Cambodian life. These depict scenes from battles with Cham’s troops, the fall of Angkor, scenes from daily life, royal hunting, and the worship of the gods. The best preserved bas-reliefs are on the first tier. It’s easier to view them from the east entrance to Bayon, moving in a clockwise direction. The bas-reliefs in the east gallery are depictions of a military campaign: soldiers, elephants, carts pulled by oxen, cavalrymen and musicians. In the south gallery can be seen scenes from the grand battle of Tonle Sap Lake in 1177. In the north gallery, the walls are elaborately carved with acrobats, jugglers, and native animals.

Bas-reliefs of the first tier (clockwise from the east gate):

One of the mysteries of Bayonne is that mankind today has proven physically unable to rebuild it without the use of cement as a binding material. Modern scientists and builders have not been able to cut stones of this size with a given accuracy so that they could be built into the temple without cement. They tried to reconstruct the Bayon Temple using the same methods that were used to build it, but this did not work and modern technology had to be employed. 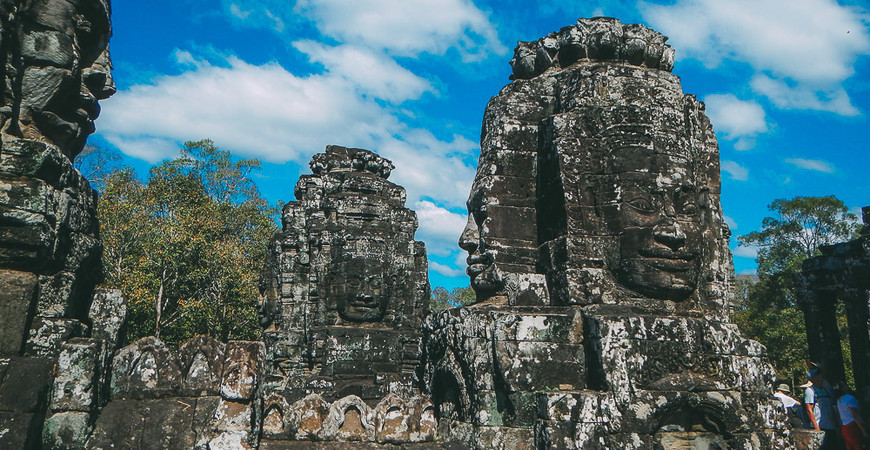 Bayon Temple is on the list of the main attractions of Cambodia. It is called the real pride of the country not only by locals, but also by tourists who have visited the place. Bayon is a three-tiered “temple-mountain”. Inside it is an intricate network of galleries and courtyards, which became so because of the rather frequent reconstructions of the temple. However, the main highlight of Bayon is the multiple bas-reliefs that tell travelers about the life of the Khmer kingdom.

Bayon is located in the area of Angkor, which in the Middle Ages was a prosperous center of the Khmer Empire. The temple complexes of Angkor – Angkor Thom (which includes Bayon Temple) and Angkor Wat – are well preserved to this day. Both complexes are rightfully the outstanding monuments of Khmer art and are included in the World Heritage List of UNESCO.

History of Bayon Temple in Angkor

Bayon Temple was built at the turn of the 12th and 13th centuries. It was supposed to commemorate the King Jawayarma VII who ruled at that time. To the great disappointment of tourists, it has not survived in its original form. The temple has been reconstructed and rebuilt many times by successive rulers.

Although Bayon was built in the spirit of Buddhism, there are clear features of Hinduism. The main highlight of the temple are the towers on which are carved stone faces. Each tower was carved with four faces. The architects arranged them in such a way that they look in different directions.

READ
Hawa Mahal or Palace of the Winds, photo and description

Another interesting fact – the countenances change their moods during the day. It is because the light that falls on them at different angles. As a result, if you observe them all day long, they can be both good and evil. From time to time, they laugh, and from time to time, they are sad. Sometimes they even scare the tourists walking around the temple.

Originally Bayon had 54 towers. Unfortunately, over time, some of them were destroyed for various reasons. Only 37 towers with 216 heads (countenances) have survived. All of them are different, although they seem the same at first. An interesting fact – no matter what point of the temple you are, at least five or six stone faces will be watching you at a time.

King Jawayarma VII decided to build Bayon on the site of a small temple. As conceived by the architects of the time, it was supposed to be a peculiar and beautiful place of the Khmer Empire, which was more than succeeded by the creators of the medieval project. The famous writer Somerset Maugham said of the temple, “Bayon is the most fantastic building in the world.

Fortunately for tourists, the temple has survived to this day very well. This is also due to the workers who built it, as they say, to the best of their abilities. Mainly stone blocks were used for its construction and only some parts of the building were made of wood. By its form the temple reminds a pyramid consisting of three tiers. Thus the two bottom tiers have the form of a square, and the upper one is designed in the form of a circle. In it the central sanctuary is located.

The bayonet is distinguished by the complex structure. Inside it there is a considerable quantity of corridors and galleries. They are made so that it is almost impossible to separate the different levels from each other. The rooms of the temple are quite dark. Tourists should also pay attention to the narrow passages and relatively low ceilings.

READ
White Temple in Thailand, How to get there description and photos

Bas-reliefs of the temple

The walls of the temple are decorated with bas-reliefs depicting various scenes from the life of medieval Cambodia. Most often they depicted battles with Cham’s troops and the fall of Angkor. You can also find scenes from the daily life of the people of that time, how the king and his family lived. The worship of the gods is also represented separately.

In total, the masters carved 11 thousand figures in stone.

How to get to Bayon Temple in Cambodia

Bayon Temple is located just a few kilometers from one of the largest and most famous cities in Cambodia – Siem Riep. The city has an international airport and because of the many attractions in the surrounding area is often visited by tourists.

From Siem Reap itself, there are no buses to the country’s famous landmark. Public transport within the provinces of Cambodia is practically non-existent. The exception is Phnom Penh, where recently they have gradually started to create intracity bus routes.

To see the temple one must take a cab or use the services of tourist companies. There are no usual operators in Cambodia, so you need to bargain, otherwise the cab driver will put too high a price. Another option is to rent a car. However, it is not very safe to drive in the country, local drivers neglect the usual rules that we are accustomed to and encourage reckless driving.