What happened to the Georgian fortress Bebristsikhe

Not far from Tbilisi and the former capital of ancient Georgia Mtskheta there is a monument of Georgian architecture – Bebristsikhe fortress.

Medieval fortress Bebristsikhe fortification on the northern border of the ancient capital of Georgia, Mtskheta.

History of the fortress

The history of the construction of this citadel goes back to the early feudal centuries and is shrouded in a veil of mystery. Bebristsikhe was first mentioned in Georgian historical sources in connection with the death within its walls of the king of the great dynasty of Bagration Demetre I. This happened in 1156.

However, the remains of ancient structures discovered by archaeologists during excavations date back to the I. AD. What were these constructions found on the site of a dilapidated fortress standing on a high hill, remains a mystery. The existing fortress walls were built in the IX century. Due to its location on a steep cliff on the right bank of the river Aragvi, where the surrounding mountains form a narrow gorge and the stream becomes a rough stream, in ancient times the fortress was called “the northern gate of Mtskheta. It was impossible to get into the city bypassing the citadel. Thus Bebristsikhe had an important defensive role in protecting the city from bellicose mountain tribes and other enemies who tried to attack from the north.

The Bebristsikhe fortress is built on a flat section of limestone hill of stone screed, and consists of a citadel and a lower courtyard (total dimensions 100×69 m). The plan of the citadel looks like a triangle. Each corner has a tower, and all three are damaged. The largest, the southwestern one, has three stories. The other two are badly damaged.

The north tower is a little better preserved, but only the foundations of the east tower are left.

The southwest and north towers are peculiar, with openings that are 2.5 m high and 1.5 m wide on the inside and 0.3 m narrow and 1 m low on the outside. In the eastern corner of the lower courtyard of the fortress there is a rectangular structure, similar to the towers of the citadel. All this shows that Bebristsikhe is an example of an ancient fortification structure.

Spring rains in 2010 caused a landslide that completely destroyed the north-eastern wall. The rest of the fortress walls were also cracked. So now it is just a ruin, requiring serious restoration work. We can only hope that these works will begin soon, as Bebristsikhe fortress is under the supervision of the Ministry of Culture and Monument Protection of Georgia.

How to get to Bebristsikhe from Tbilisi

The ancient city of Mtskheta, from the center of which you can walk to the fortress in 20-30 minutes, is very close to Tbilisi, just 25 kilometers north of the capital. And to get to Mtskheta is not difficult and inexpensive, almost by any mode of transport.

Not far from the exit of the subway station “Didube” there is a spontaneous bus station. From there every 15 minutes takes a bus to Mtskheta. In order not to make a mistake, you can ask local people. People here are friendly and will tell you everything with pleasure. So, just for 1.5 GEL (about 35 RUR) and 25-30 minutes ride you can be in the center of a small tourist town Mtskheta.

There are commuter trains from Tbilisi railway station, where you can buy a ticket to Mtskheta station for 1 GEL (about 23 RUR) just before the departure. The city center is about 1.5 km from the station.

This is the most expensive and sometimes unsafe way if you take a cab not through an official carrier, but on the street. But the cab driver for 50 GEL (1200 RUR) will take you to Mtskheta, wait as long as it takes to see the sights (including the fortress of Bebristsikhe), and bring back.

Bebristsikhe fortress is one of the many monuments of Georgian history, unfortunately, is now in a deplorable condition. Apart from the ancient walls, bearing the spirit of the time, there is nothing else here. There is no infrastructure around, no entrance fees, only stones and grass. So it is probably not worth the effort to visit this particular place. But if you find yourself in one of the main tourist centers of Georgia – Mtskheta, be sure to include in your program a walk to the steep cliff on the bank of the Aragvi, to touch the walls, which have seen a lot in their lifetime, and carefully guard their secrets. 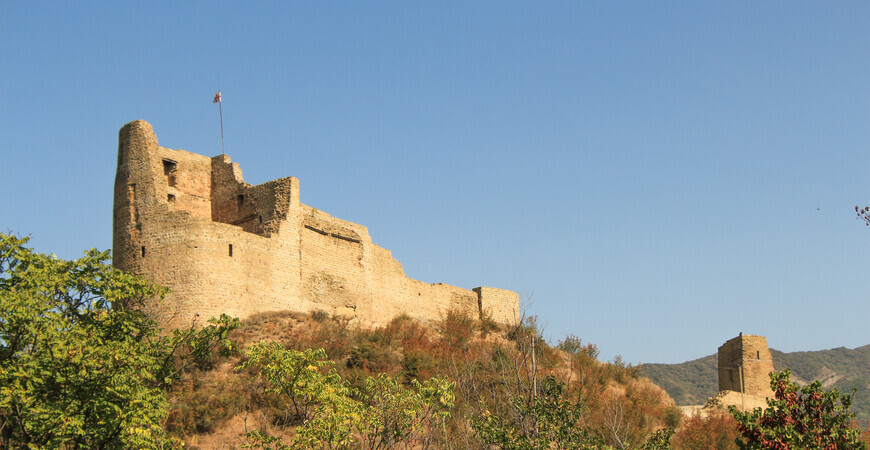 The Bebristsikhe Fortress (Georgian ბებრისციხე – Fortress of the Elder), also sometimes called Beltistsikhe or Natsikhari, is the ruins of an ancient Georgian fortification built approximately in the 9th century, which is under the control of the Ministry of Culture and Monument Protection of Georgia. At one time the fortress protected the only approach to the city from the north, lying between the river Aragvi and the rocky mountains, from raids of mountain tribes.

The citadel stands on an elevated site with picturesque views of the surrounding area: the park at the foot, the river, the mountains, several districts of Mtskheta (both the old city and the new quarters), and even the Jvari monastery.

According to archaeologists, the fortress of Bebristsikhe in Georgia was built in the ninth century, four centuries after Mtskheta ceased to be the capital. Recent excavations have also shown that there were even older stone buildings on the site of the current ruins, erected here much earlier – presumably as early as the first century BC. Antique objects were also found among the ruins.

One of the most famous events in Bebristsikhe is the death in 1156 of the King of Georgia Demeter I of the Bagration dynasty. The period of his reign was only one year, and his death was sudden and inexplicable.

One of the translations of the word “Bebristsikhe” is the Fortress of the Elder. The name comes from an old and little known legend about Prince Simon, who built this fortress in ancient times, and his children – his son Mamuka and daughter Makrina. After the death of the prince, power passed to his son Mamuk. The new ruler did not treat his subjects in a very charitable manner: he mocked them, raised taxes and otherwise made their lives more difficult. Seeing all this, Makrina tried to reason with her brother to stop his cruelty. But entreaties only enraged Mamuka and he imprisoned his sister in one of the towers of the fortress.

After that, Mamuka’s hatred and cruelty only continued to multiply. And one day he rushed at his subjects with a lash, as at the same moment the black snakes became firmly entangled in his legs. His sister, seeing what was happening from her tower, raised her hands to heaven and asked God to forgive her brother. God heard his sister’s prayers and saved the terrified Mamuka. After that Mamuka repented of his sins, gave away all his wealth and went on wandering. His sister took a monastic vow and remained in Mtskheta.

After 70 years Makrina died. At her funeral, an old man pressed his lips to her forehead and said: “My sister, I have fulfilled my vow. I have also fulfilled my vow.” After these words, the old man immediately died, as it turned out, next to his sister. After this the inhabitants began to call this place Bebristsikhe (The Fortress of the Elder).

The Bebristsikhe fortress in Georgia consists of a citadel and a lower courtyard, and its territory is a flat area of about 1,500 square meters, lying on top of a rocky and grassy cliff. The historical monument resembles a triangle with towers in the tops.

Today, only ruins remain of all the structures, among which are the remains of walls and other structures, as well as three half-destroyed towers. The southwest tower is the best preserved of all the others: it has three floors intact. The North Tower is in slightly worse condition. Only the base of the north tower remains.

Every year the castle becomes more and more aged. In 2010, as a result of a landslide, the northeast wall was completely destroyed. The rest of the buildings were also badly damaged and are now being restored. Restoration work is carried out gradually, and as of 2019 is still going on, due to which the inside of the fortress may not be allowed. But you don’t have to go upstairs at all, the fortress is clearly visible from the road.

Panoramic photo taken on the walls of the fortress:

How to get to the fortress Bebristsikhe

The half-ruined fortress of Beltistsikhe is to the north of the central part of Mtskheta, about 1.5 kilometers from the confluence of the rivers Aragvi and Kura. From the center of Mtskheta to the medieval monument can be reached on foot in 20-25 minutes, if you go north on the road to Narekvavi. From Tbilisi you can get here by car, train or bus.

From the railway station in Tbilisi to Mtskheta there are suburban electric trains. From the station to the castle Bebristsikhe – 3.3 kilometers, which can be covered in 5 minutes by car or on foot in 40 minutes (at the same time to appreciate the other attractions of the city).

Map of the walking route from Mtskheta railway station to the ruins of Bebristsikhe:

From the side of Tbilisi, a shuttle bus passes by the fortress. You can get there from Didube metro station, where every 15 minutes there are buses to Mtskheta. The trip will cost about 1.5 GEL (the price is better to clarify on the spot). Travel time is 25-30 minutes.

Cabs in Tbilisi are recommended to take from official carriers, for example, through the mobile app TaxiMaxim or Yandex. Cab. The price of the trip is about 20 GEL. To quickly order a transfer, for example from Tbilisi airport “Shota Rustaveli”, use online services such as Kiwi-Taxi.

Map of the car route from Tbilisi airport to the ruins of Bebristsikhe: