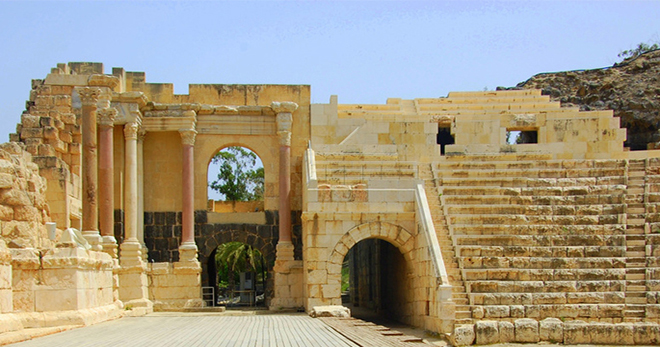 Hidden in the holy land of Israel is the modern city of Beit Shean, built on the site of a settlement whose history goes back 4 thousand years. Over the years it has experienced times of prosperity and power, decline and desolation, great losses and battles, one of which was lost forever. An earthquake in 749 almost completely destroyed all the buildings and structures, silencing the city for centuries.

A little history of the ancient city

At the site of the city of Beit Shean, which means “City of the Sun” in Greek, stood the ancient city of Scythopolis, which is one of the oldest in Israel. The fortunate location at the intersection of major trade routes, the large amount of water and the availability of fertile land made Scythopolis a strong and solid city.

The first mention of the local settlement was found in Egyptian papyri and dates back to the 19th century BC. Thanks to excavations that began in the 20th century and continue to this day (and excavated only 10% of the city), was discovered about 20 cultural layers, beginning with the ancient Egyptian. The findings tell a unique and rich history of this forgotten site. For comparison: the ancient city was populated by about 40 thousand people, while in the modern Beit Shean – only 17 thousand.

What can we see in the ancient city?

The main and unified historical attraction of Beit Shean are the excavations of the ancient civilization, where archaeologists have found perfectly preserved objects that anyone can walk around and take pictures:

READ
Jug Valley in Laos - a pottery workshop of giants

Since 2008, anyone can visit the ancient excavations at night with a unique laser program. Video images accompanied by sound are projected onto the remains of the ancient city. A short film, during which photography is prohibited, gives an insight into the life and ways of the inhabitants of that time. After the movie the guides will offer a night tour of the ruins. Tour times are Monday, Wednesday and Thursday from 8:30 to 10:45 p.m., Saturday from 9 a.m. to 10:45 p.m. The cost is $11 for an adult and $30 for a child. 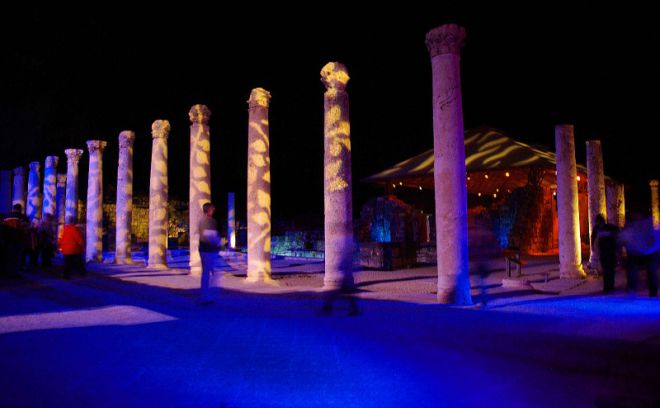 There are not many places to stay in the small, modern town of Beit She’an. For example, Gilad’s View Hotel, located at 1 Ben Gurion Street, offers apartments for two people starting at $100 per night.

There are a huge variety of cafes, restaurants, and pizzerias that offer a wide variety of meals. There is also a McDonald’s. So you can find food to your liking and your wallet.

The city of Beit Shean is located in the northern district of Israel, in the Jordan Valley, about 20 km south of Lake Tiberias.

If you are going to get to the ancient city on your own, then focus on the following routes:

Beit Shean. The ruins of the ancient Roman city in Israel.

Want to feel the glory days of ancient Rome? Then the city of Beit Shean in Israel is a great place to do this. This well-preserved historic monument is one of the best attractions in the country.

Much of the ancient Roman city is well preserved. The streets with columns and the remains of the temple give you a glimpse of the way of life during Roman rule. 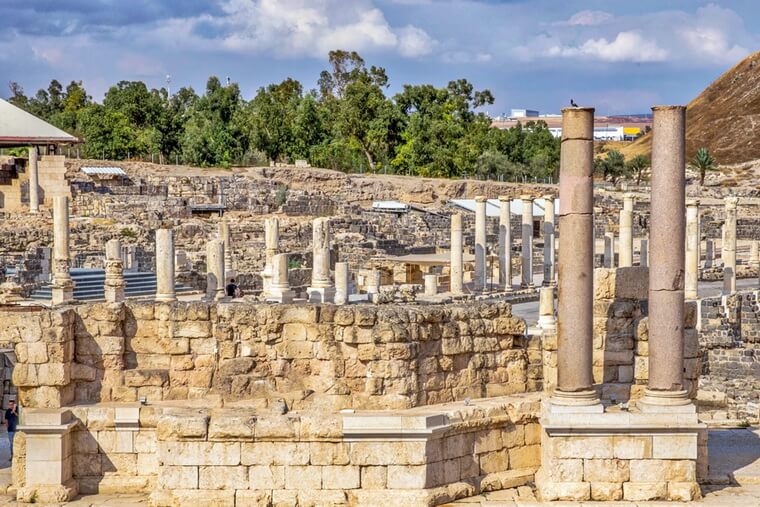 Start your tour of Beit Shean with the Roman Theater. It was built during the reign of Septimus Severus, at the end of the 2nd century. The theater is perfectly preserved here. 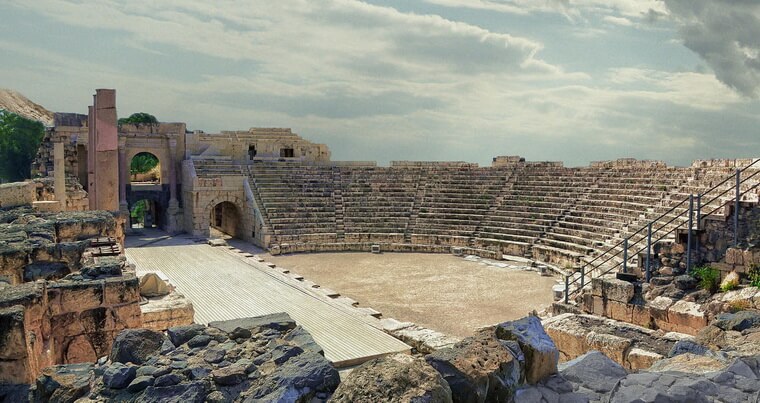 It once held about 6,000 spectators. The lower part of the building was built into the ground and had semicircular tiers for seating. The upper part was built on massive supports with nine entrances that lead to a horizontal aisle halfway up the auditorium. 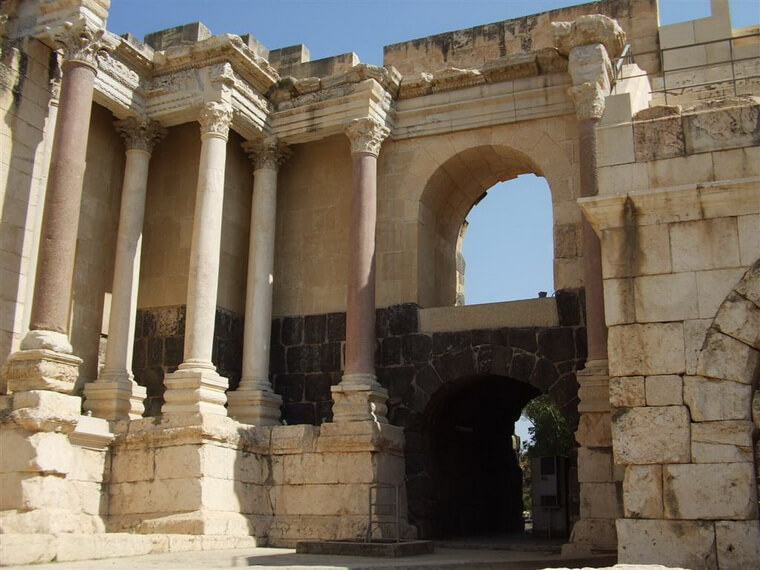 The entrance to the Roman theater

The upper tiers of seating are partially destroyed, but the lower tiers are well preserved. There are also large remains of the stage wall. Originally it was decorated with columns and statues.

To the north of the Roman theater you will see Tel el-Husn, the main attraction of the local archaeological excavations.

Excavations in this ancient site in the 1920s uncovered stele and sculptures from the Egyptian period.

Many of the finds, such as the stele of Pharaoh Setos I and the stele of the goddess of war, Anat, are now in the Rockefeller Museum in Jerusalem. Subsequent excavations since 1986 have produced such important results that Beit She’an has become one of the major archaeological sites in Israel. 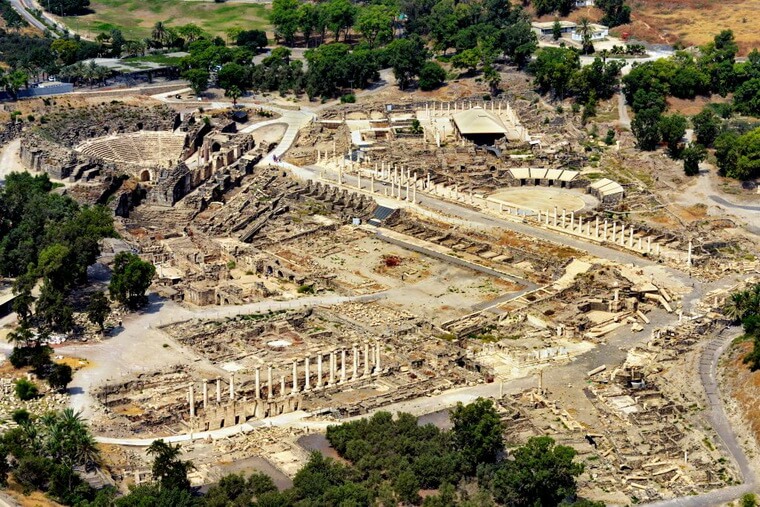 General view of Beit She’an from above

Beit She’an has a large number of ruins so it is not possible to see them all in one day. If you have a short trip here planned, then try to make sure that Tel el-Husn is first on the list of sights to see.

Since Beit Shean was destroyed by an earthquake almost immediately after its conquest by the Arabs, the building materials of the ruined city were not used afterwards. This made the job easier for archaeologists who only had to rebuild the walls and buildings destroyed by the earthquake.

Another well-preserved Roman-Byzantine theater was found in the southern part. It could also hold up to 6,000 spectators. To the north of it is a bathhouse from the Byzantine period. It is surrounded on three sides by colonnades and contains remnants of the original mosaics and marble. 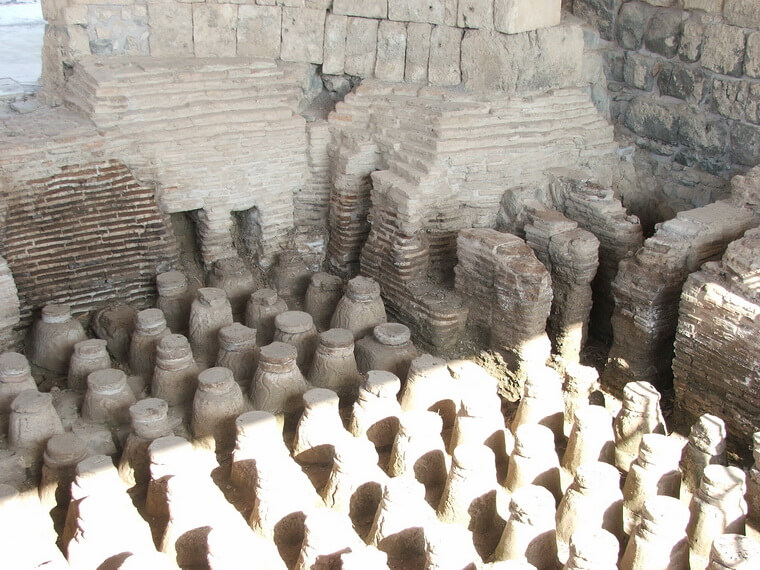 An excellent example is the mosaic of Tihe (ca. 6th century AD). It was found in a Byzantine building northeast of the baths. It depicts Tihe, goddess of fortune and good luck, with a horn of plenty. 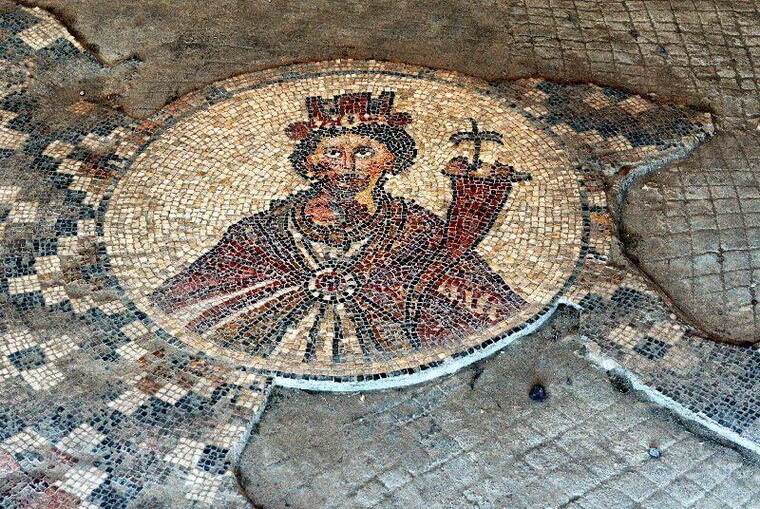 Mosaic of the goddess Tiché

From the baths the steps lead to a columned street connecting the theater and baths with the city center. At its northern end a wide staircase leads to the remains of the Roman temple of Dionysus. To the east of this temple are the foundations and architectural fragments belonging to the nymphaeum and the basilica, which served in Roman times as a marketplace and meeting place. To the southeast of the basilica, a series of monolithic Roman columns and part of a Byzantine street with stores lead to the southern part of the city.

An interesting fact is that nowadays you hardly ever hear the name Tel el-Husn, as it is simply called Beit Shean. That is, in fact, it is the same thing. The modern city of Beit Shean lies to the southwest of the excavations.

Remains of the Byzantine era

Byzantine artifacts were found north of Tel el-Husn, on the other side of the Harod Valley. Here, in 567 A.D., a noble lady named Mary and her son Maximus built a monastery decorated with mosaics.

The entrance goes into a large courtyard with a mosaic covering depicting animals and birds. 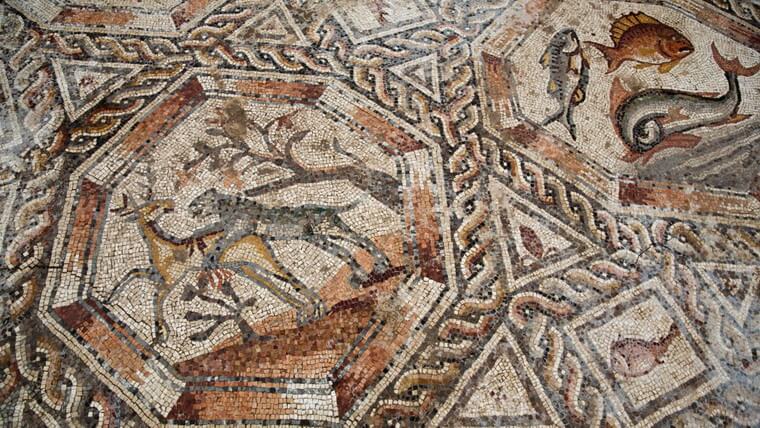 Two Greek inscriptions and in the center – in a circle of 12 figures representing the months – the sun god Helios and the moon goddess Selene. On the left you will see a rectangular room with a mosaic that reads “was completed in the time of Abbot George and his deputy Komitas”. 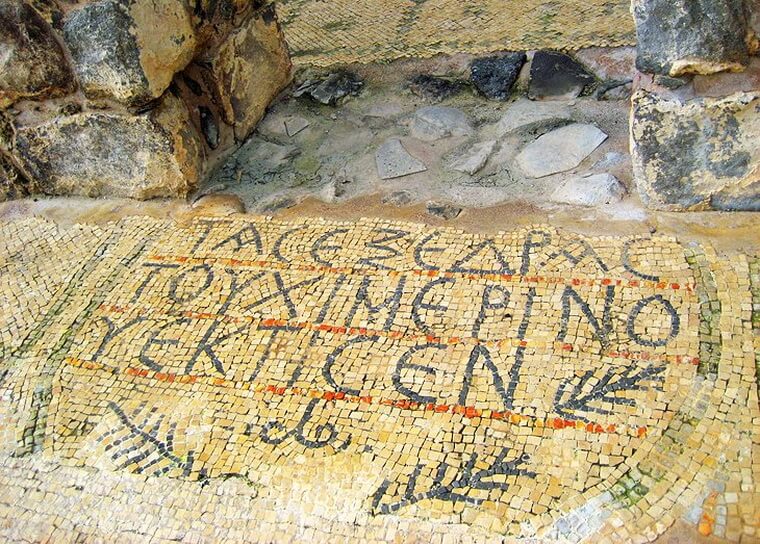 Other mosaics (grape tendrils, hunters, animals) are in a small room opposite the entrance, as well as in the eastern part of the monastery. The tombstones in the sanctuary are signed in Greek.

A little history of Beit Shean

American archaeologists from the University of Pennsylvania identified 18 different sites during excavations in 1921-23. The earliest date back to the 4th millennium B.C.

Beit Shean is first mentioned in Egyptian records from the 19th century B.C. After Pharaoh Thutmose III seized the city in the 15th century BC, he greatly fortified it. In the 11th century BC it was conquered by the Philistines. However after 3 centuries the city for unknown reasons was abandoned. 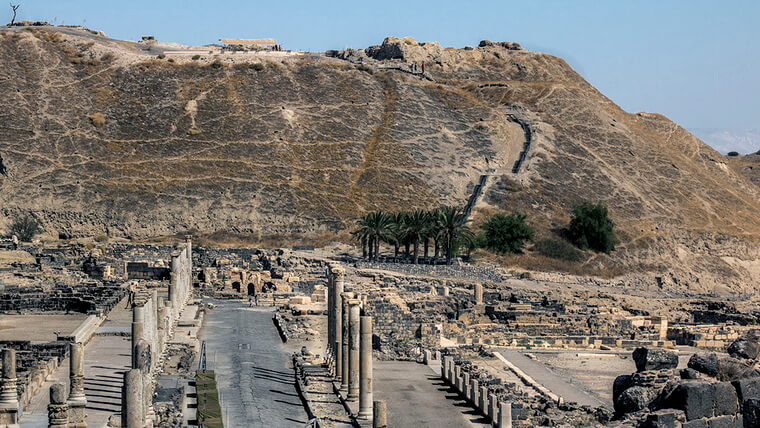 In the 3rd century BC it was inhabited by the Scythians. Then the city was called Scythopolis. In the 2-1 centuries BC the Jews began to settle there. The Roman consul Gnaeus Pompey in 63 BC declared it a free city, which became a member of the Decapolis, or the Decapolis Ten. This was the name given to the union of ten cities on the eastern border of the Roman Empire.

Under Roman rule, Beit Shean became prosperous due to its advanced agriculture and textile industry. Many historical artifacts testify to this.

During the Byzantine Empire, the city had about 40,000 inhabitants. Most were Christians, but there was also a Jewish community. The Arabs conquered Beit Shean in 639. But soon after the city was destroyed by an earthquake and almost abandoned.

READ
Cherapunji is the wettest place on Earth. India

A prime example of a modern abandoned city is the famous ghost town of Colmanskop in Namibia.