Beleuil Castle is the jewel among Belgian castles. This residence of the princely House of Linen is located 10 km south of the town of As in the department of Hainaut, 30 km east of Tournay and 80 km southwest of Brussels. Often dubbed the “Belgian Versailles”, Beleuil Castle’s classical Renaissance interior is befitting its high-ranking owners. Lavishly furnished halls and chambers hold gifts from famous guests – Catherine the Great, Marie Antoinette, Goethe, Voltaire and Rousseau. Thousands of travelers come here every year to admire the castle, which shows the life and manners of the aristocracy, to stroll through the picturesque park and get to one of the exhibitions.

Beleu Castle is located in the central part of the town of the same name. It stands at the base of the vast forested Forêt de Beleu, surrounded by man-made water channels. Chievres Airport is 20 minutes from the Château along the Chaussée de Mons.

It is known that in the XIII century there was a small stone fortress on the place of the present castle. In 1394 the land on which it stood, passed by inheritance from the Counts of Condé to the Princely House de Lignes, to whom the castle of Beleu belongs today. The new owners carried out several global reconstructions, until finally, by the 18th century, the castle took its present shape. And in 1664, around the castle was laid out a luxurious French-style garden with many small ponds.

Belej is quite an imposing building with an inner courtyard. There are four round towers at the corners, there is a basement and two residential floors, and there are also attic rooms. An artificial pond has been created around the building, which is home to some rather large carp. There are two marble busts in the vestibule, from which you can get to the Marshals’ Hall. One depicts the Russian Empress Catherine II and the other depicts Prince Charles-Joseph de Ligne, who was the most famous writer of Belgium in the 18th century. In the Marshals’ Hall hangs paintings by the Frenchman Leprens, painted by him during his stay at Catherine the Great’s court in 1758, about life in Russia.

In the Hall of Ambassadors are three large canvases recounting the most important moments of Prince de Ligne’s life. There are also two very valuable paintings in the dining room, and the table here can seat up to forty people. The second floor consists of several living rooms, including the suite of Charles de Ligne, the famous Belgian writer. The rooms and chambers are richly furnished and hold many gifts from venerable guests.

The unique library of the castle of Beleu counts more than twenty thousand ancient books. Bindings of many of them are made by famous masters. In addition to books, the library contains about 3,500 letters reflecting the connections of the de Ling family with members of the aristocracy and monarchs.

Belej Castle is surrounded by a park of about 25 hectares, created in 1664 in the French style. Its main feature is that there are many ponds, which previously served various purposes – from the usual bathing to the preparation of ice for the summer. The large pond is decorated with sculptures, the main of which is Neptune. In one part of the park there is a greenhouse, built in 1830 and previously used as a winter garden, but now has become a great place for weddings, various seminars and other events.

In late April and early May the castle hosts an “amaryllis extravaganza” – for ten days the castle grounds are transformed by splendid floral compositions of about two thousand amaryllis flowers and several hundred orchids. And at the end of summer in the castle are organized concerts of classical music.

Tourists can visit the castle at weekends and public holidays from Easter until the end of September and every day in July and August.

You can get to Belej only with your own or rented car. The castle is located between Athos and Mons, near the French border. 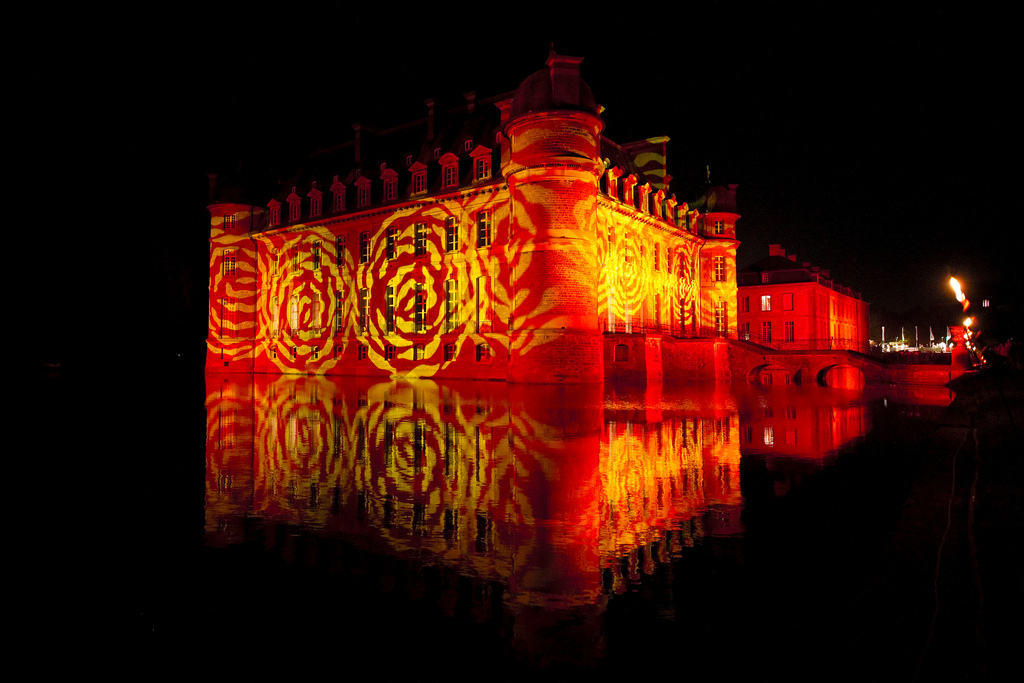 In the Belgian province Hainaut, not far from the French border, for several centuries the castle of Belleuil, nestled in shady gardens and surrounded by water, has been standing for a great castle. Originally a citadel, Belleuil is one of the most beautiful chateaux on the water, and is often called the “Belgian Versailles” for the splendid decoration of its state rooms and the elaborate French-style park.

Today, the elegant Belleuil castle has earned the flattering title of the jewel of Belgian chateaux, but the baroque building came much later than the history of Belleuil. In the Middle Ages the castle was the site of a fortress, and the local feudal lords were the Counts of Conde. In the spring of 1394, the Dukes de Ligne, whose family possessions were located nearby, in the picturesque village of Ligne on the river Dandr, became the heirs of these lands.

Over the centuries, the fortifications were repeatedly rebuilt, gradually acquiring the more elegant features of past aristocratic castles. By the 17th century there was practically no trace of the castle left, and Belej became a permanent residence of the princely family of the Lineys, who own the castle to this day. Only massive walls of the building, with round towers crowned with rounded domes in the corners, remind one of the old medieval times. 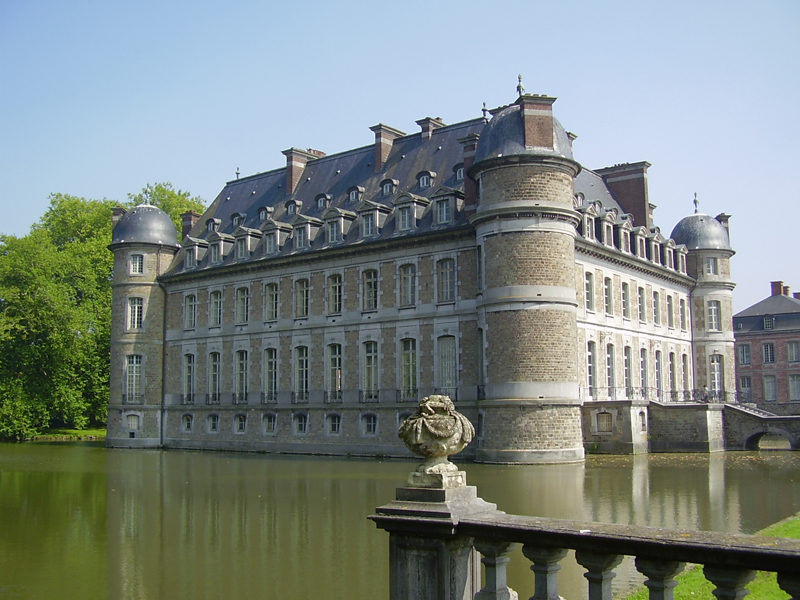 In the early 20th century the castle was badly damaged by fire, but by 1906 it had regained its former glory. Today, as with most European castles, Beleu is available to independent travelers and tour groups. Of course, walking around the residence and the park of one of the most influential families in Belgium is not a free pleasure, and the days and times of visits, although not too strict, but still regulated.

READ
What is Pernstein Castle in Bohemia

The classic interiors of the château are a vivid indication of the status of its owners: paintings by renowned painters, ancient tapestries, marble statues and gilded decorations are everywhere. The tour of Beleu Château includes several rooms with authentic period furnishings, including the private apartments of Charles-Joseph de Ligne, famous in the 18th century for his talent as a writer. 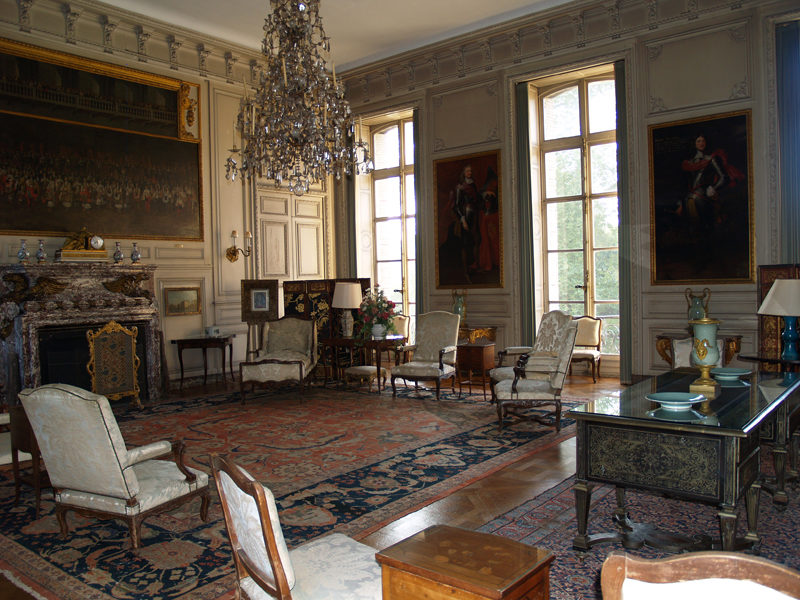 No less impressive than the lavish decoration of the salons and state rooms is the castle’s library, which has amassed over 20,000 books over the centuries. Some of the old folios have valuable bindings, decorated by hand by renowned bookmakers. The Beleu library also holds extensive archives of letters, which tell many interesting stories of the de Lignes’ relationships with various monarchs and other aristocrats. 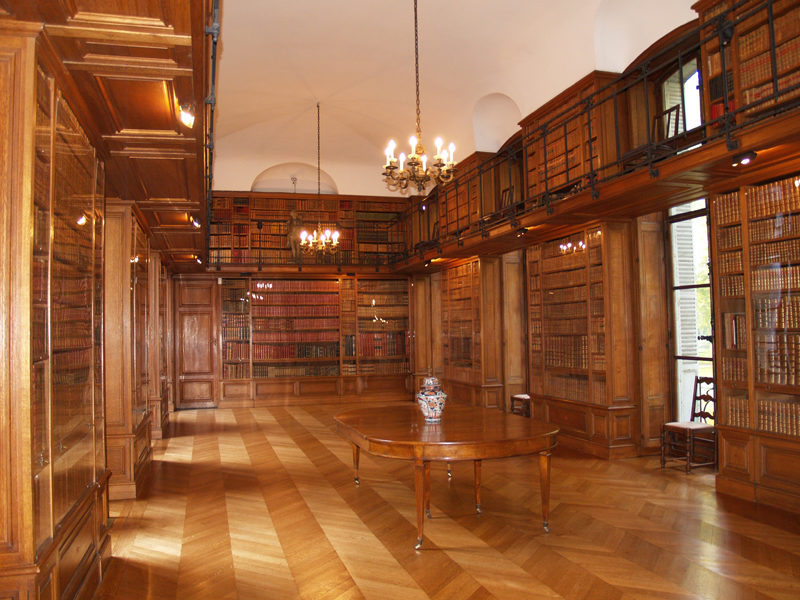 The ancient park of the castle, which was laid out in the 60s of the 17th century, deserves a separate story. To go around all the corners of the park will take a lot of time, as it is spread over an area of over 25 hectares, so on weekends you can see the splendor of the park on a special mini-train. Even a walk on foot will be a pleasure, as Beleuil carefully maintains the basic principles inherent in the parks of the French style: a harmonious alternation of shade and light, greenery and water. 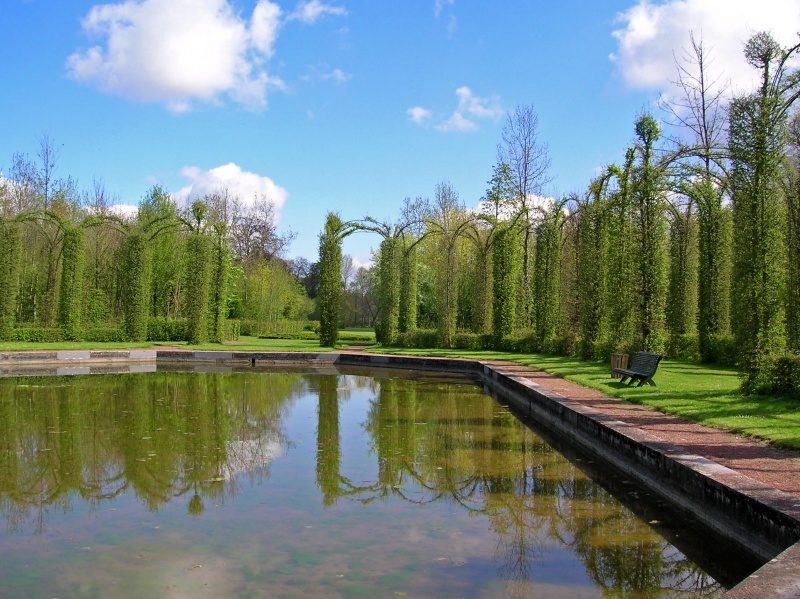 The artificial lake is not the only water body in the park, there are many lakes, ponds and springs, each of them interesting in its own way. For example, the Oval Lake, named for its shape, freezes only in severe frosts, and that is why ducks like to “live” here, they do not fly away to warmer lands. Near the sources like to linger superstitious tourists, because according to legend in the water sources need to throw a coin and if the bubbles in the water begin to increase, you can hope for the fulfillment of a cherished desire.

To the south-west of the park you can see the Orangery, built in 1830, where strange plants, many of which were introduced to Belgium for the first time, were grown for the park. Nowadays, the Orangery building is liked to rent for weddings and other celebrations. A very popular object for photographing in the park of Beleu is rightly considered a Great Pond, which in 1742 was decorated with sculptures of Neptune, Aeolus and Aquilon. 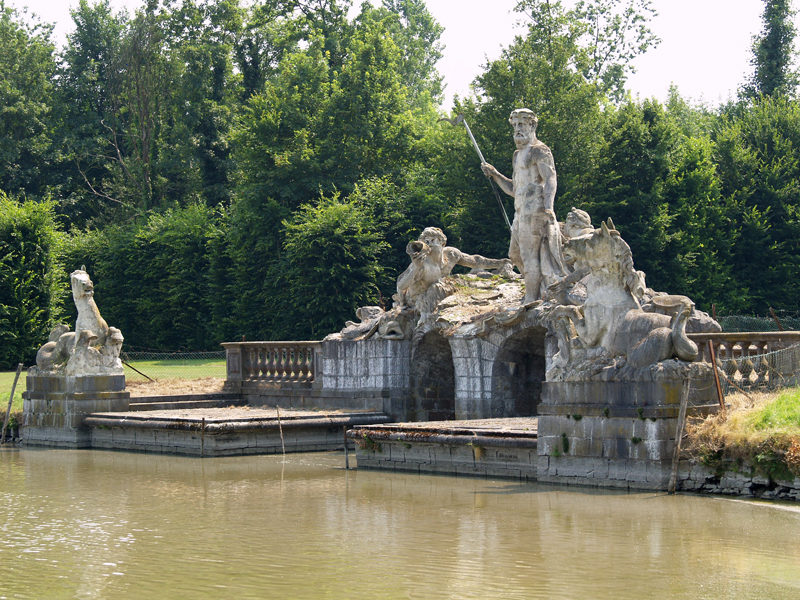 Sculptures of Neptune, Aeolus and Aquilon

In mid-Spring (end of April – May), Beleu Castle invites visitors to enjoy a spectacular Amaryllis flower show, during which all the rooms are bursting with flowers. Amaryllis and orchids adorn every empty corner of the rooms and even the lamps hanging from the ceiling. In total, this extravaganza of beauty and fragrance uses up to 5 thousand amaryllis and several hundred orchids, which are specially ordered from reputable floral companies in Holland. 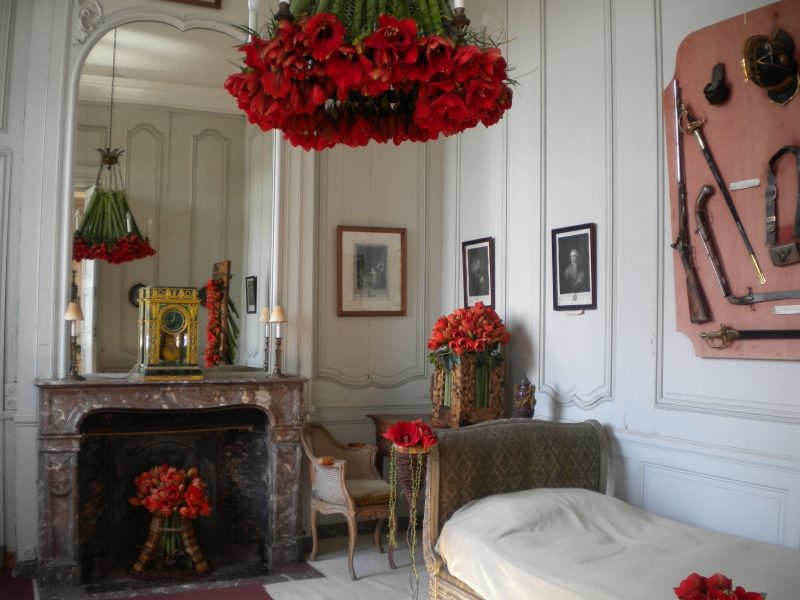 The open-air music festival, held in the Belej Park for a quarter of a century, is very popular with music lovers and lovers of all things beautiful. Over 25 years, the festival has become a prestigious music event, taking place in several stages and gathering on seven stages dozens of groups and hundreds of solo artists. Typically, the Beleu Music Festival begins on the first Saturday in September, when the tour stops and only festival-goers have access to the park to enjoy musical interpretations of classics from noon to midnight.