The Belvedere in Austria is the largest palace complex, and in translation, a beautiful view. This palace is the best representative of the Baroque palace in the world.

The sumptuous Belvedere palace complex in Vienna is rightly called the Austrian Versailles – so rich is the architecture of the buildings, and so elegant is the surrounding park. A few centuries ago the castles were built as a residence of Prince Eugene of Savoy. A couple of centuries later, it was in the halls of the palaces that the fateful Vienna Protocol was signed, and somewhat later the Declaration of Independence of Austria. Currently the palace houses the National Gallery, where every tourist can admire the best works of the famous Austrian impressionists and expressionists.

The name of the palace complex, located on the hillside, translates from Austrian as “beautiful view”. Indeed, it was the picturesque scenery that was one of the reasons why the area was chosen in 1716 to build the residence of Eugene of Savoy.

Returning after a grueling war with the Turks, the prince wished to have a luxurious castle for his summer vacation. The Belvedere built by the famous architect Johann Lukas von Hildebrandt fully met the great commander’s expectations.

But later it became clear that the prince needed another building, in which it would be possible to hold balls, official receptions and audiences. So began the construction of a second castle with an incredibly rich interior, a majestic hall, numerous frescoes and sculptures.

Since Eugene’s death the owners of the residence have changed several times: the buildings have been in the possession of the imperial family and the municipality. Today the Belvedere palace complex is home to many of Austria’s largest art galleries and one of its most famous landmarks.

Today the outwardly inconspicuous Lower Belvedere has the status of a museum of painting and sculpture of the Austrian Empire in the 17th and 18th centuries. The original furnishings of the castle with stucco bas-reliefs, frescoes, statues and unique wall paintings have been preserved. It is worth a visit:

The Upper Belvedere in Vienna is today a great pilgrimage place for art lovers of Gustav Klimt, Van Gogh, Renoir, and other 19th- and 20th-century painters. The value of the works in the castle is estimated at billions of euros. Although the ancient interior of the halls has not been preserved, the majestic facades, decorated with huge sculptures, are really impressive.

To make the museum visit more comfortable for tourists, each palace is equipped with dressing rooms, cafes and souvenir stores.

No less majestic are the grand stables of the castle, wrought iron gates decorated with statues and a huge three-level park with swimming pools and a waterfall.

Since you can reach Belvedere by metro or streetcar, it is not difficult to visit the site yourself. The nearest subway station is Taubstummengasse, from where you can quickly walk to the Upper Palace. However, if you are planning an extensive tourist itinerary, you should start with a tour of the Lower Belvedere. You can get here by streetcar with the following routes:

After visiting the prince’s former residence, you can stroll through the lush park, admire the paintings in the Upper Belvedere and then go to the Museum of Modern Art or to other sights in the city center.

If you are not quite sure where Belvedere is in Vienna and how to get to the castle, you can call a cab. The official address of the palace complex is Vienna, Prinz Eugen Str. 27.

Ticket prices vary depending on what is to be visited.

You can use the ticket more than once – it is valid for 30 days from the first visit.

Discounts on tickets are available to students and seniors (over 65 years) with supporting documents. Visitors under 18 years of age can tour the museums for free.

The doors of the palaces are open to visitors from 10 a.m. to 6 p.m. daily, and the museum is open until 9 p.m. on Wednesdays. Walking around the park complex is free during daylight hours.

The Belvedere – Vienna’s enormous palace and park complex is one of the most interesting sights in the Austrian capital. From the Italian word “belvedere” is translated as “beautiful view”. And you know, this fully corresponds to reality, because from the vast palace possessions spread out on the slopes of the mountain, there is a wonderful panorama of the streets of the Austrian capital and the Church of St. Stephen. 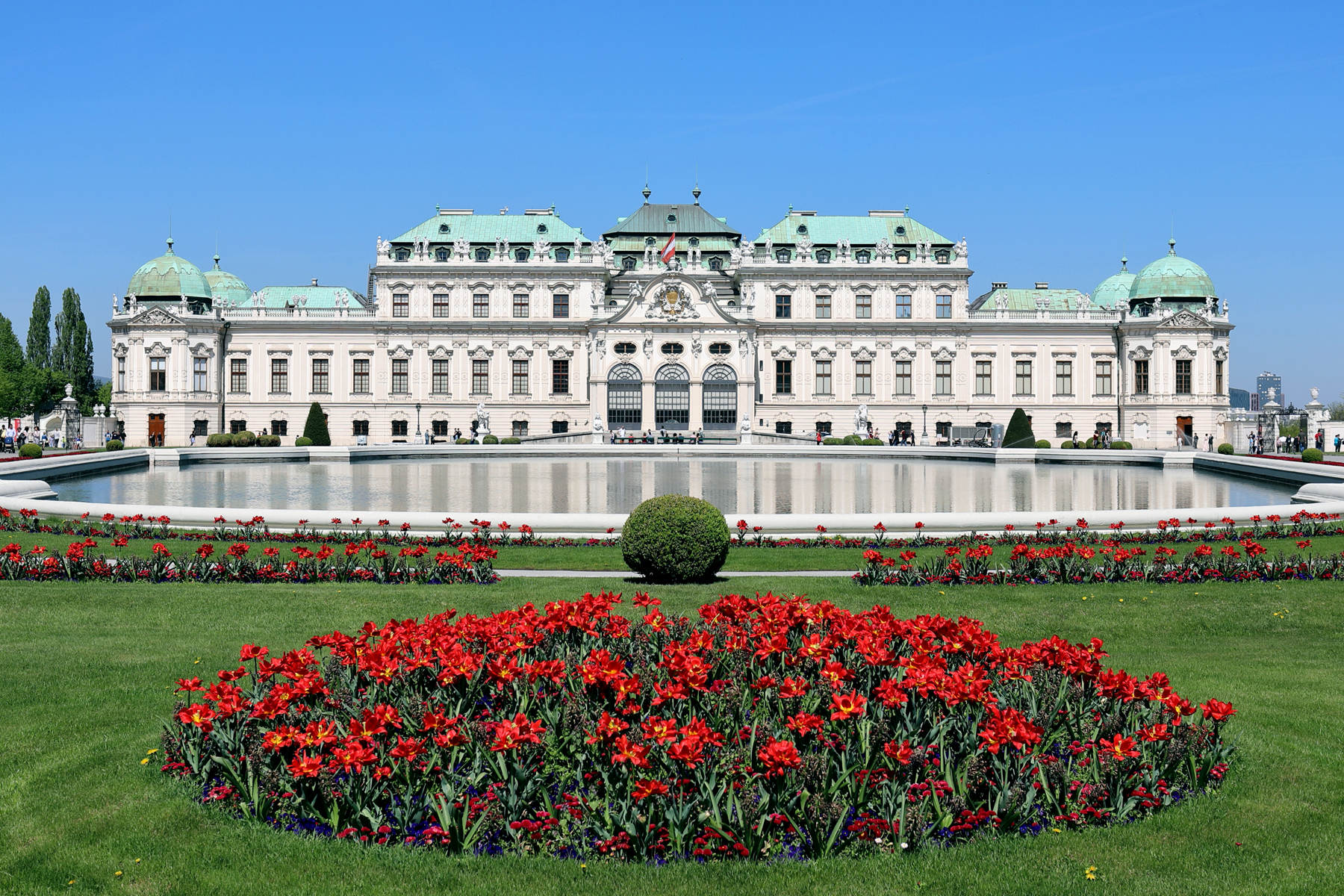 The structure of the complex

The Belvedere complex, often called the Austrian Versailles, consists of several parts, each with its own unique atmosphere. Take a virtual tour of Vienna’s main historical monument! 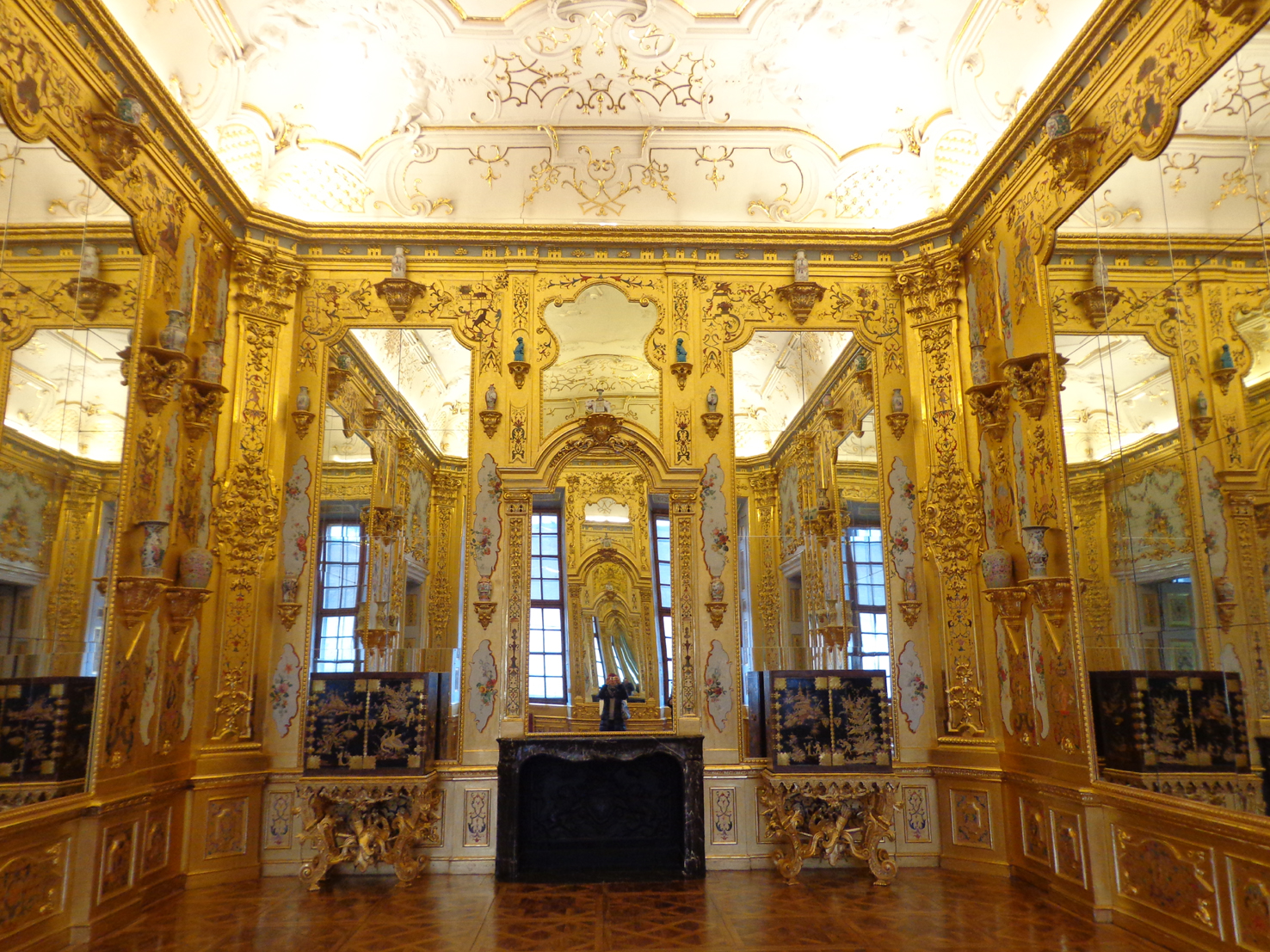 The history of Lower Belvedere might not have started if not for the French Revolution that forced the king and his relatives to seek a safe haven. It was then, back in 1714, that the Holy Roman Generalissimo Eugene of Savoy commissioned the architect Johann von Hildebrandt to build a new castle. The building turned out to be magnificent! The Prince’s state bedroom, the Mirror Room, the huge dining room, the Golden Study, the Marble Gallery… These places are still considered the main attractions of the Lower Palace. A few years later the unique art collection of Emperor Joseph II. was moved here, which made the Belvedere Museum in Vienna one of the most visited places in Austria. 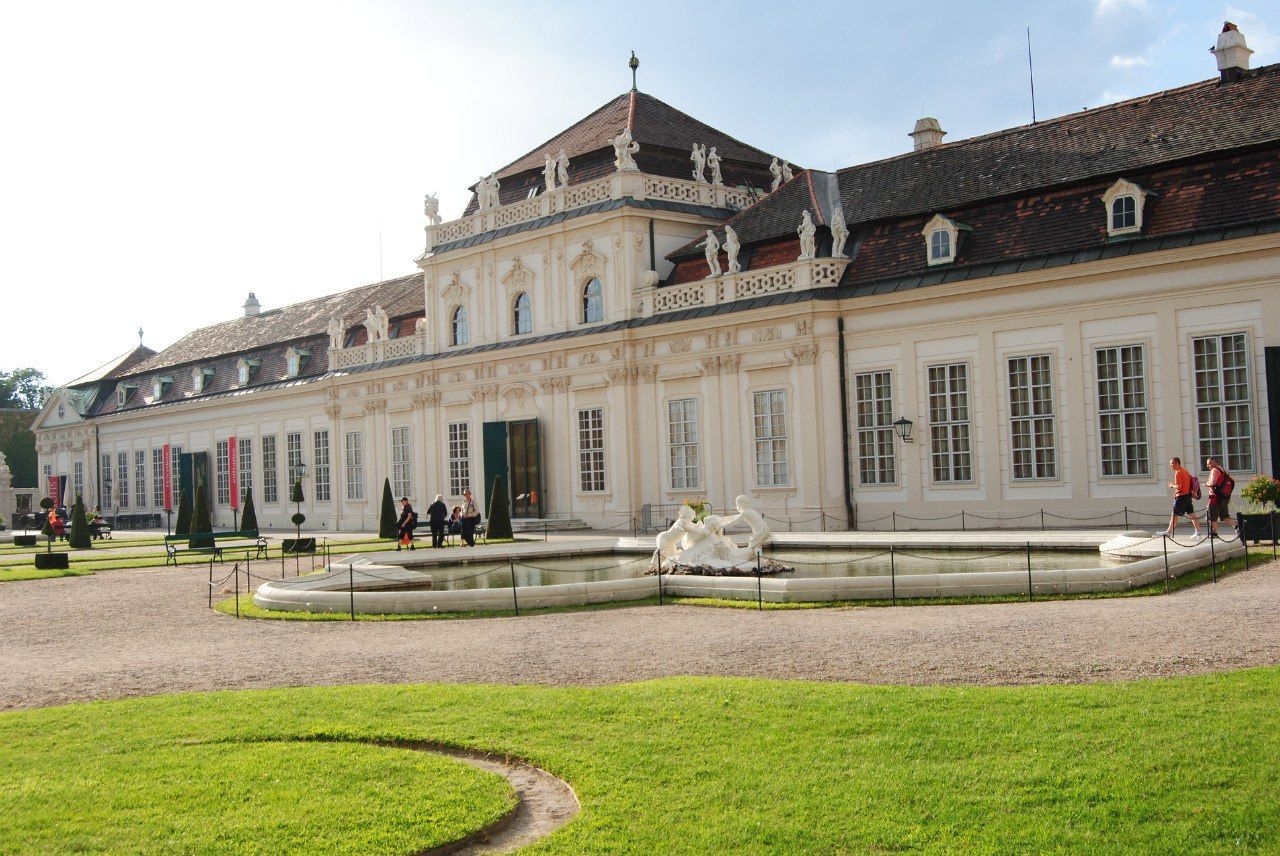 At the moment several Baroque and Medieval exhibitions are on display in the rooms of the castle. There are also frequent temporary exhibitions of contemporary art. Even if you are not interested in painting, you should come here just to enjoy the original setting of the palace with its stucco reliefs, murals and frescoes by A. Martino depicting the Prince of Savoy as Apollo. The real gem of the Lower Castle is the Hall of Grotesques, decorated in the ancient Roman style and adorned with allegorical sculptures with skewed faces. 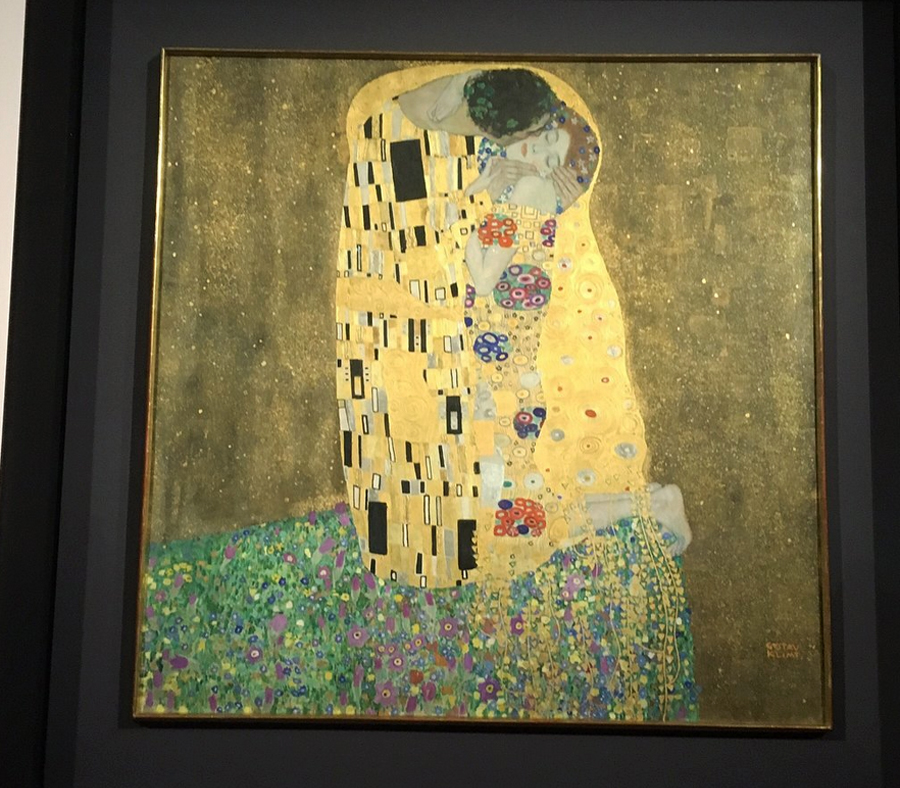 The Upper Belvedere in Vienna, completed only in 1722, is the former representative residence of Prince Eugene of Savoy and one of the oldest museums on the planet. Visitors are impressed not only by the majestic facades of the castle, decorated with huge sculptures, but also by the permanent exhibitions of works of Austrian painters of the 19th and 20th centuries (Monet, Beckman, Van Gogh, Renoir, Schiele, Kokoschka and others). The main highlight of the museum is a collection of paintings by Gustav Klimt, headed by the world-famous “Kiss”. Experts claim that the total value of the collection of paintings in the Upper Belvedere in Vienna is estimated at billions of euros. 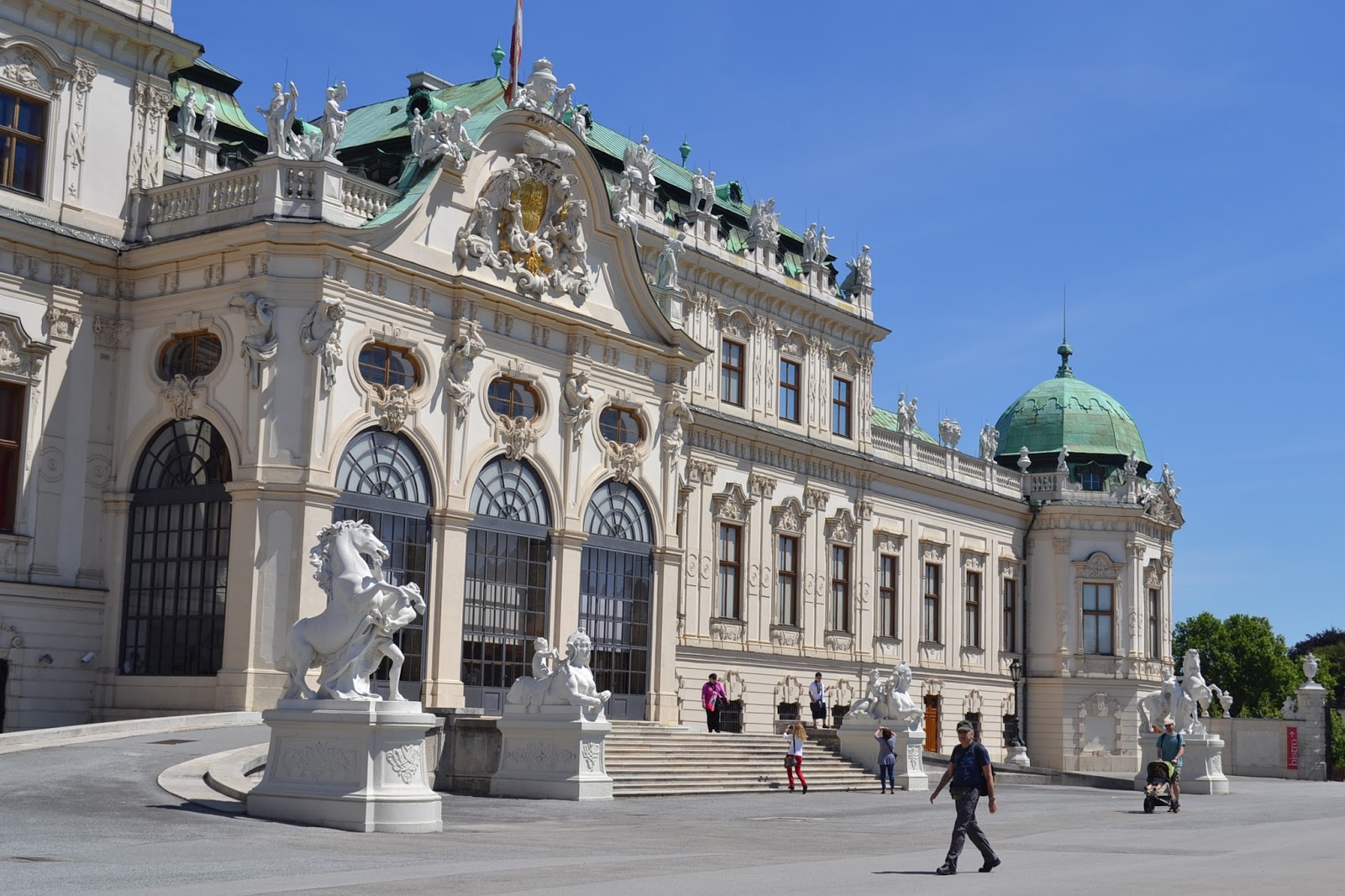 Due to the fact that it was here where balls and masquerades were once held, the central entrance to the palace passes through an openwork wrought iron gate guarded by statues of lions with coats of arms on their feet and sculptures of cupids. The entrance alley, made in the form of a three-arch pavilion, is surrounded by dense greenery, behind which you can hear the splash of a small lake. The stunning appearance of the building is complemented by lush interior decoration. But most of all – it almost merges with the surrounding nature. To emphasize the proximity of Upper Belvedere to the surrounding landscape, the architect has made the roof in the form of rounded multilevel tents reminiscent of the surrounding hills. 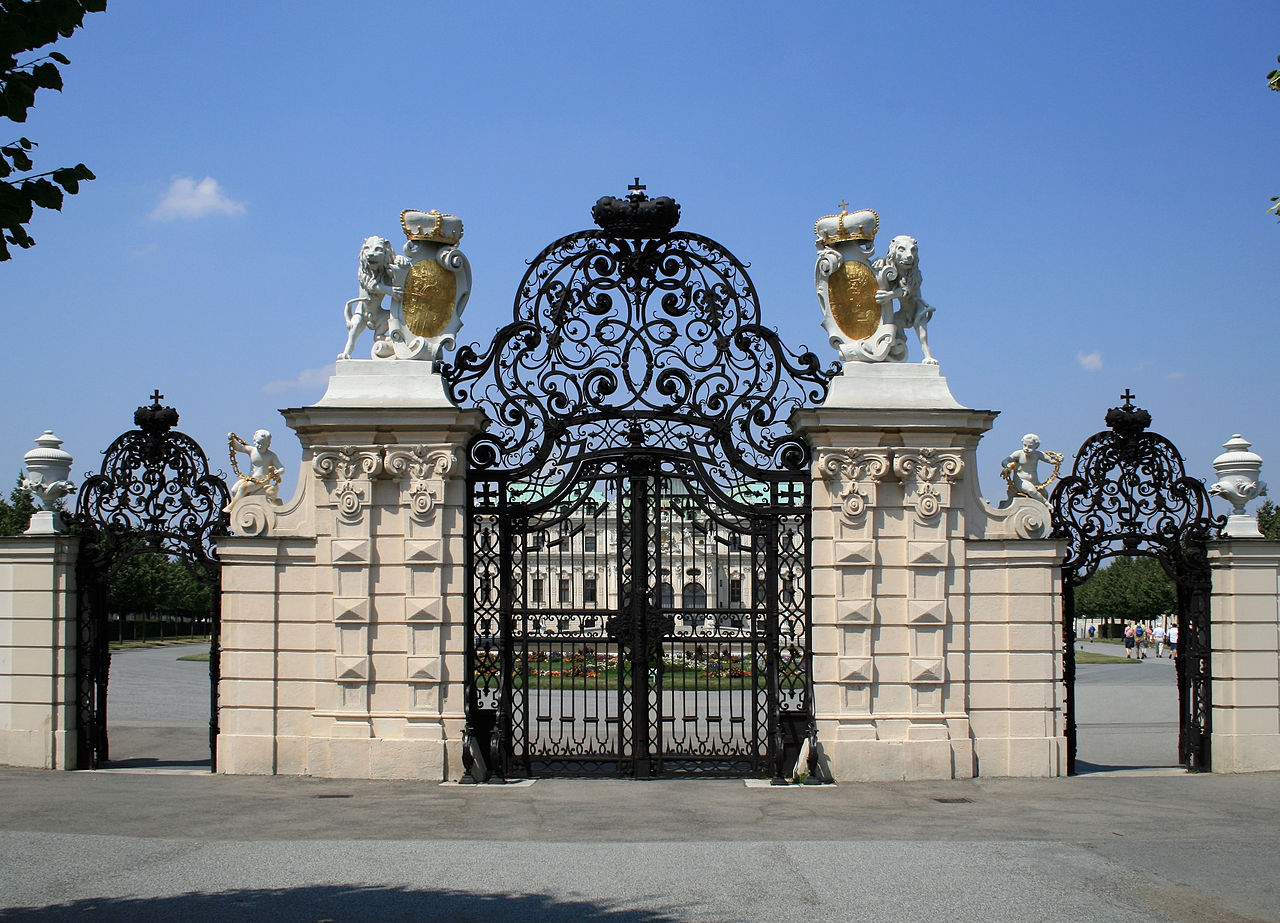 It should also be noted that this part of the complex is associated with several historical episodes. So in 1896 in one of the rooms of the palace the famous composer and conductor A. Bruckner died, and almost 60 years after that event, on May 15, 1955 in the front room, covered with red marble, an agreement was signed that ended the long German occupation and marked the beginning of Austria’s independence.

The cascading three-tiered park, which was the first Alpine plantation in Europe, was laid out in 1803 on the initiative of Archduke Johann. It is a symmetrical composition, made in the best traditions of old France and connecting the Upper Belvedere with the Lower. The author of this creation was the Bavarian architect Dominique Girard. 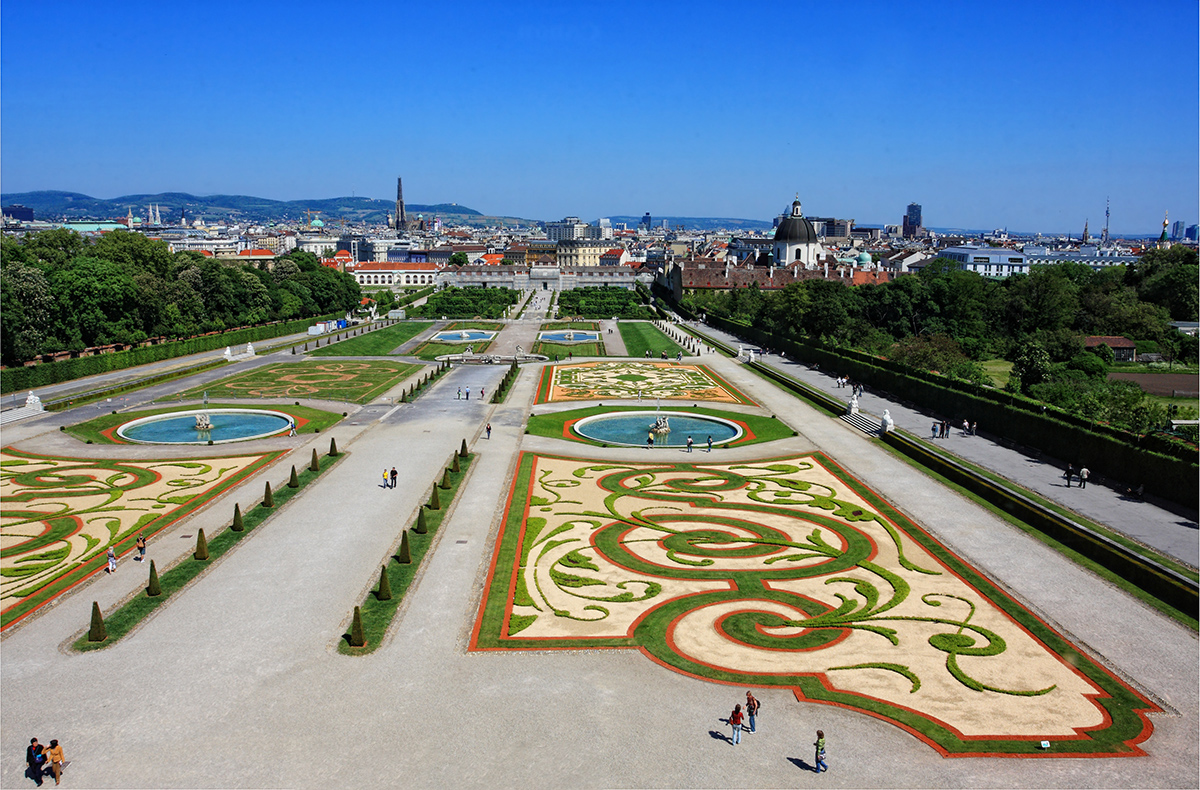 The main feature of the Belvedere park is a huge number of terraces, ponds, hedges, fountains, working from April to October, and decorative compositions, decorated with sculptures of nymphs, newts, sphinxes and other mythical creatures. In addition, its territory is planted with more than 4000 alpine plants, creating an original pattern on the lawns. 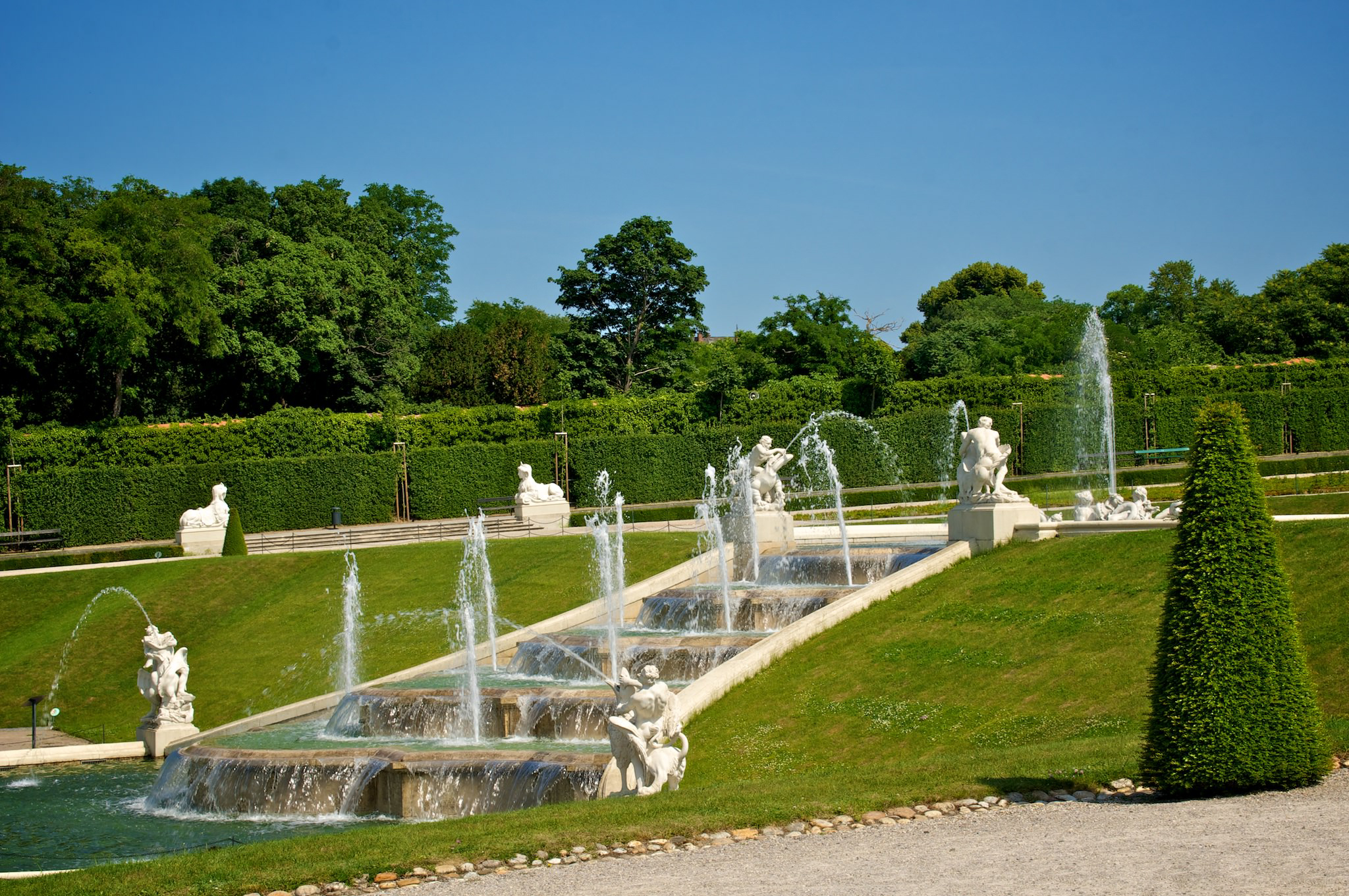 Nowadays this is a favorite resting place not only for visitors, but also for Viennese themselves. The locals come here with their families after a hard day’s work. Some picnic on the spacious green lawns, others simply stroll through the park alleys admiring the graceful architecture and the beautiful landscape.

The Orangery of the Belvedere in Vienna used to be a simple winter garden on the grounds of the Lower Palace. It was heated during the winter, and when summer came, the roof and south façade were removed so that the orange trees could enjoy the warm rays of the sun. At that time, Prince Eugene’s orangery was a masterpiece of carpentry, because unlike other similar structures, it had a convenient sliding structure. 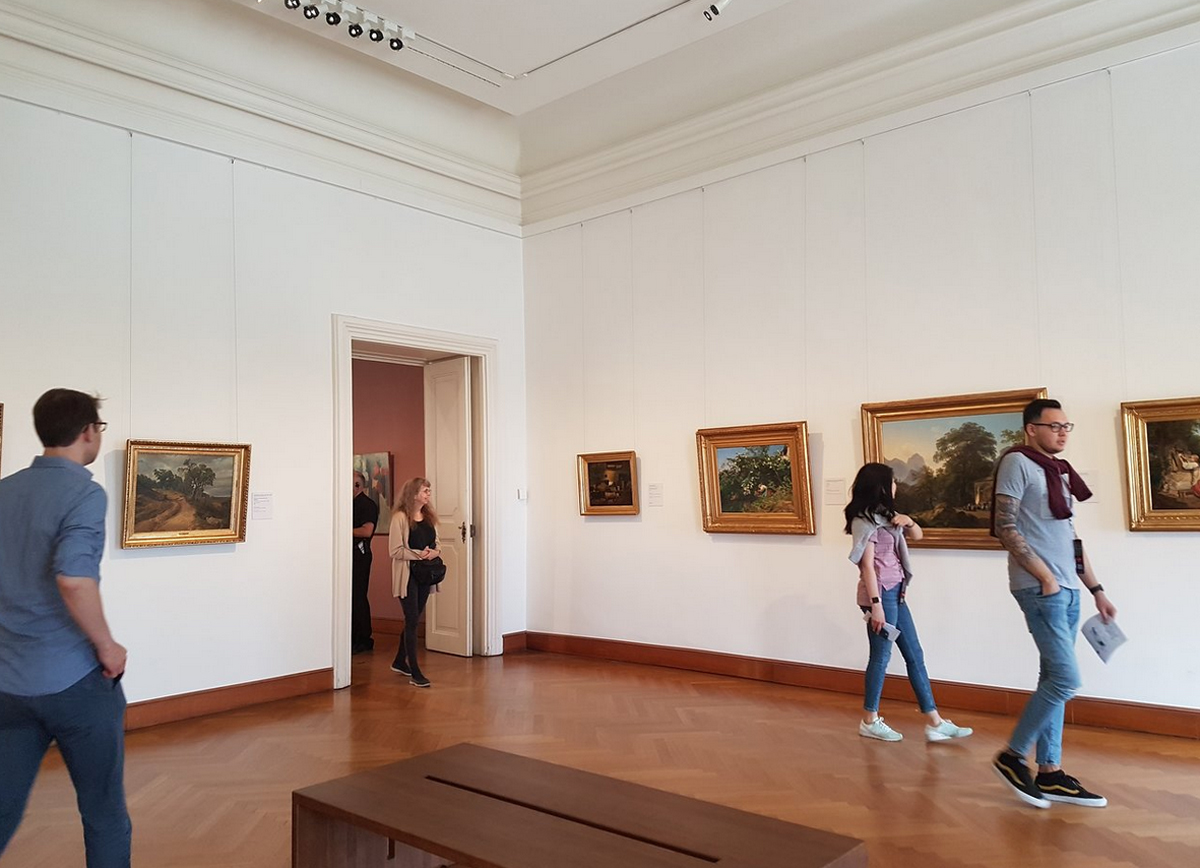 Unfortunately, after the death of the Generalissimo, the orange trees were moved to Schoenbrunn, and the building itself was converted for domestic purposes. The situation changed only in 1918, when the works of major Austrian modernists, expressionists and impressionists were exhibited there. And so the former greenhouse became the National Gallery of Belvedere in Vienna, attracting visitors from all over the world.

The castle’s stables deserve no less attention. Once upon a time they held horses, now they house the exhibition of the famous German architect, Kühn Malvezzi. The collection of this outstanding master has more than 150 works – from late Gothic panels to a Romanesque crucifix. But its main treasure is the altarpiece revealing Renaissance forms. In addition, the former stables are regularly used for teaching exhibitions on one subject or another and are closely linked to the activities of the research center. 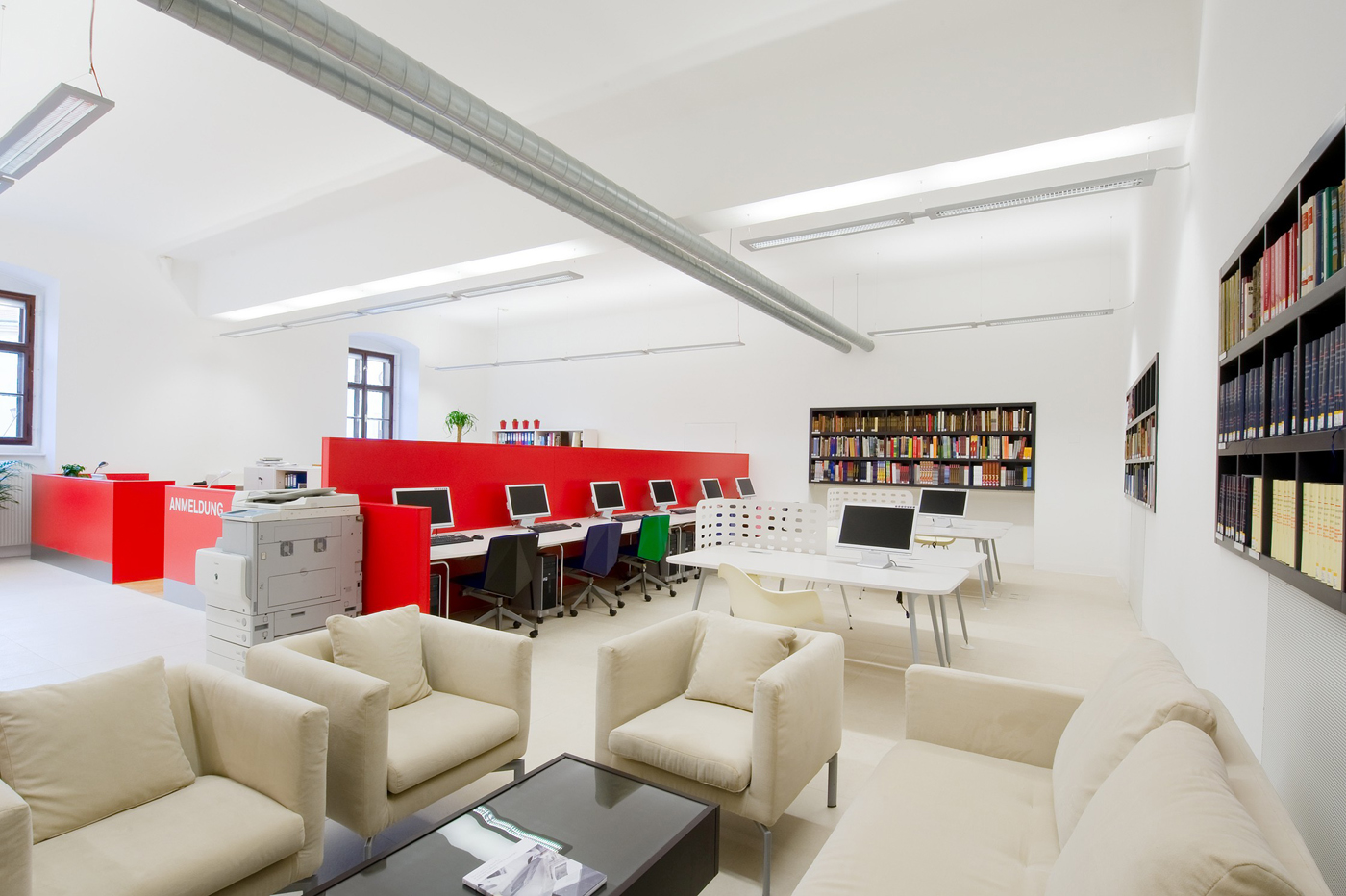 The Belvedere palace in Vienna is not only famous for its rich collection of art paintings, but also for its unique research center for the study and preservation of outstanding works of Austrian art. The center’s holdings include an enormous number of objects from various historical periods (from the 14th century to the present day). For a small fee, visitors can explore the collection, talk to the staff of the archive, browse the local library and view photographs from different eras of the Belvedere.

The Palace complex Belvedere in Vienna is located at Prinz Eugen-Straße 27, 1030 Wien, Austria. You can reach it in two ways. Consider each of them.

Way 1: To the Lower Castle:

Method 2. To the Upper Castle:

The Castle Belvedere in Vienna is open to visitors during specific hours. 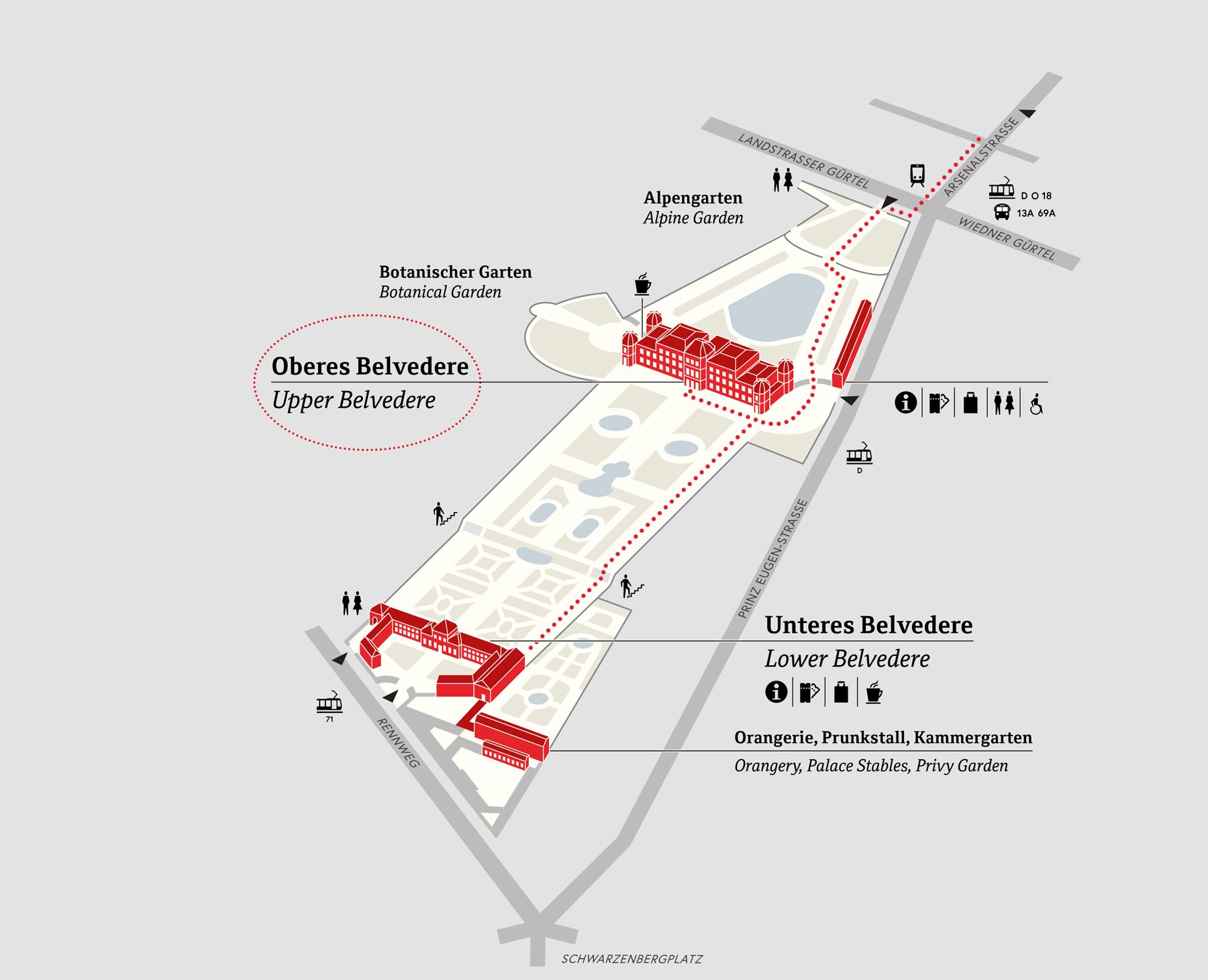 Entrance to the palace complex is carried out on several types of tickets. 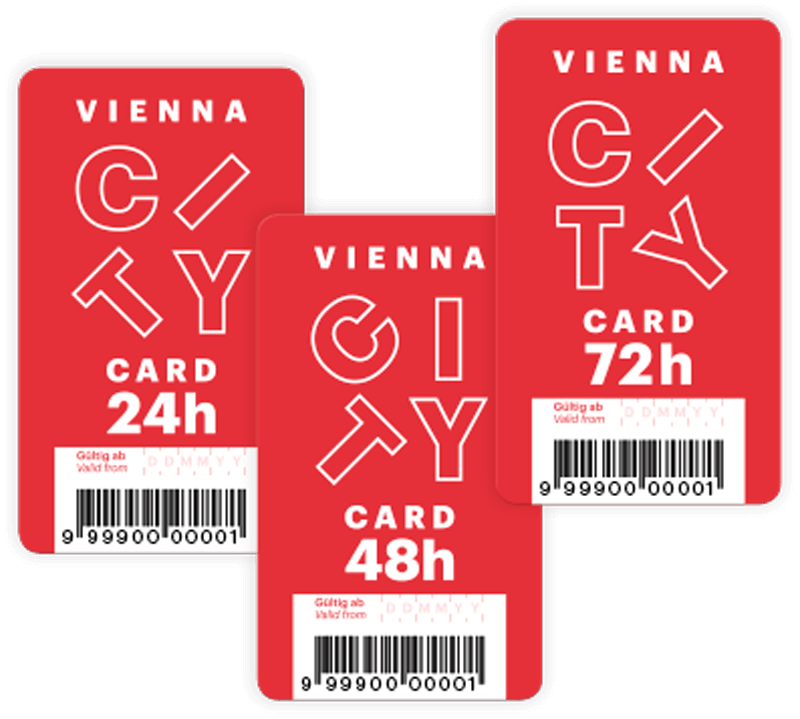 Belvedere Vienna is really a wonderful place, the memory of which will surely remain in the heart of every tourist. Everyone can find something for the soul here. Lovers of art – unique collections in museum halls, nature lovers – freshness of fountains and beauty of alpine flora, lovers of royal balls – rich palace halls, where people of blue blood shone. The atmosphere of the castle will take you back to wonderful times from which you never want to come back.

Updated: 27 Feb, 2019 Many people quite deservedly perceive Austria as a treasure trove of architectural…

Schönbrunn Palace, the summer castle of the Habsburg royal dynasty in Vienna, is today a…

Updated: 29 Jan, 2019 Any traveler wants to get the most out of the experience and knowledge…