Benin: West African photo journey in the footsteps of Voodoo, rituals and sacrifices, trance and kings of Africa.

After landing in Cotonou, I visited Abomey, Porto Novo, Ganvie, Ouidou and finally returned back to Cotonou with my monters, Ulrich and Serge David. They are very experienced Beninese journalists.

The mission was to document as much of Benin’s voodoo culture as possible, and thanks to the endless connections – and patience – of my guides, I was lucky enough to drink a fair amount of tea (and even gin) with kings, high priests and priestesses, witch doctors and clairvoyants. I have also attended numerous voodoo ceremonies, from personal family celebrations to boisterous events involving the entire community in dancing, singing and thanksgiving. I have met people in a trance state – and have seen countless chickens and goats being sacrificed as gifts to the gods.

The ancient city of Abomey, dawn. This was the site of the bloodthirsty Dahomey empire.

Gas station, Bohicon. Gasoline, illegally imported from Nigeria, is sold on the side of the road in large and small bottles. There are a few more traditional gas stations, but they are really only used for big trucks.

Dah Tegbesue with his wife Rosalyn and 3-month-old daughter. Dah is a significant voodoo priest in Abomey and an advisor to the king. He has two wives and four children.

The Zokoete ceremony, near Abomey, where 65 new voodoo recruits perform symbolic dances. Even at important religious ceremonies in remote villages like this one, there is no escape from phone cameras.

The dungeons of the Abomey Plateau are several created caves through which entire communities turned to flee from bloodthirsty kings and slave traders between the late seventeenth and early nineteenth centuries. More than 1,600 underground villages have been found. They are still being found today.

READ
Great Ocean Road on a map of Australia

Nan Huangre Kpojito, high priestess of Abomey. To enter her chambers, I had to crawl to her for a blessing, without looking, give her a gin and kiss the ground at her feet.

The road to Cotonou, dusk.

On the way to Ganvie, a village on stilts in the middle of Lake Nukuye.

Ganvie is the “Venice of West Africa,” located in the middle of Lake Nukuye, near Cotonou. This water village was formed in 1717 when the Tofinu people fled from a cruel king who refused to travel by water before starting a battle. The community has been in this village ever since, and it is now one of the country’s major tourist attractions.

Porto Novo is the official capital of Benin, though it is a small, sleepy town compared to the sprawling, crazy Cotonou. This picture was taken from the roof of the magnificent Hotel Les Ambassadeurs thanks to director Elvira Akpovi.

His Majesty De Gbeze Eontinme Toffa IX is the King of Porto Novo and a very significant figure in voodoo. He has been a ceremonial leader since 2007 and he told me that it is his duty to protect tradition, look out for temple followers and work for peace. He draws his power from voodoo.

The coastal road from Porto Novo to Cotonou.

Cotonou, dusk, from the Martin Luther King Bridge. On the right is a huge area of Dantokpa market the size of a small town.

Dantokpa Market, dusk. The market overlooks the Laguna de Cotonou, the canal that runs between the ocean and Lake Nukuyé, to the north.

This market vendor sells animals, living and dead, for use in voodoo ceremonies, including this python.

Valerie Winakpon. She has a TV show, a cookbook, and now a chain of restaurants, Saveurs du Benin.

Rat and fries – or Agouti and fries. Agouti is a type of rat, a Benin delicacy cooked here with carrots, eggplant and onions. The fries were served at my request, traditionally not eaten with this dish – but I recommend it.

A pair of Angbeto, the gods who protect the community. During ceremonies, they come to life and dance.

Dah Akplogen, the high voodoo priest in Godomey, Cotonou area. I describe a very different scene I witnessed: almost in total darkness, with only light behind him, I could not see Dah at all except for his sandals, when I kissed the ground at his feet and gave him the gin, which you can see in the photo.

With Dah Akplogen’s blessing, I was able to attend Houetanou the next day, an annual ceremony where the entire community (in this case Godomey, a slum in Cotonou) comes together to sacrifice hundreds of chickens and dozens of goats to their ancestors. Each family presents the sacrifice to the high priest, receives a blessing, and makes the offering.

To the high priest, Dahu Gbeze Locodenji, gifts are presented to the gods – countless chickens and a dozen goats, along with drinks, grains and other foods.

People stand in line to fall to their knees before the priest and the gods, singing and dancing.

Gin was an attribute of every ceremony I attended.

The blood is offered to the gods-the animals themselves are later eaten by the community at a festive banquet. Nothing goes to waste.

Most animals die quickly. This goat, however, took a little longer to suffer. It was hard to watch at times, but I have seen many animals die.

The path of the slaves in Ouidah is shown by statues symbolizing the voodoo gods.

Temple of Pythons, Ouida. Ouida is one of the most significant and sacred areas of Benin, whose name literally means “snake worship.” Tourists and worshippers line up here to be photographed with pythons.

READ
Do I need a visa to Croatia for Russians in 2017, price

His Majesty Dada Dagbo Houenon Houeno II is the high priest of voodoo in Ouidah and one of the most important figures in religion in all of West Africa, surrounded by his ministers.

Nan’s assistant pours palm oil on a statue of the god Gow Agbaounba.

Fa ceremony, where clairvoyants use nuts to predict the future. They are rolled in the palms of their hands and the gods express their opinions – there are 250 possible interpretations.

The Fa ceremony was held in Cromassa, a village near Ouidah. It took place late at night in the house of the priest, Dah Ahongnimon. He sacrificed some chickens and tried to sacrifice a goat to protect his family and increase his power. However, the entire ceremony, which lasted until 4:00, was wasted because the goat refused to eat the sacrificial leaves.

This woman is possessed by the gods and is in a trance state. People become aggressive and unpredictable in this state, and apparently remember nothing when they come out of the trance.

Ulrich, my mount, translator and guide, and editor of a prestigious Beninese newspaper. He raises chickens at his parents’ house in Cotonou as a hobby. 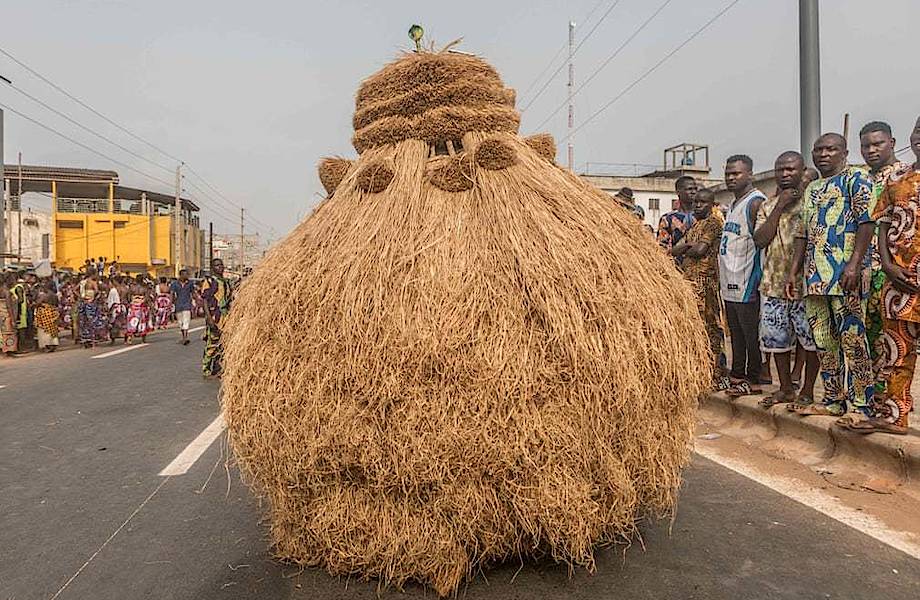 Despite the fact that the African state of Benin was a French colony for a long time and today the official language of the country is French, the African culture and traditions have not been changed by Europeans. Most Beninis profess Christianity and Islam (about 70% of the population), but their belief in the old gods and their adherence to ancient traditions is still strong. In order to emphasize their cultural diversity, the authorities of Benin have invented the International Festival of African Art, which was held for the third time this year. It may not be as large-scale as the carnival in Rio de Janeiro, but it is very colorful and interesting. The aim of the event is to highlight the rich historical heritage of West Africa and Benin in general. Hundreds of people from neighboring countries come to the festival. This year’s festival was dedicated to Ogun, one of the spiritual essences of voodoo. According to the beliefs of the Yoruba people who inhabit Benin and other countries of West Africa, Ogun is the god of war and iron, as well as the protector of the humiliated and insulted. It was he who brought civilization to the people by telling them about the working of metals.

READ
Fishing in Vietnam, how to fish and what to catch 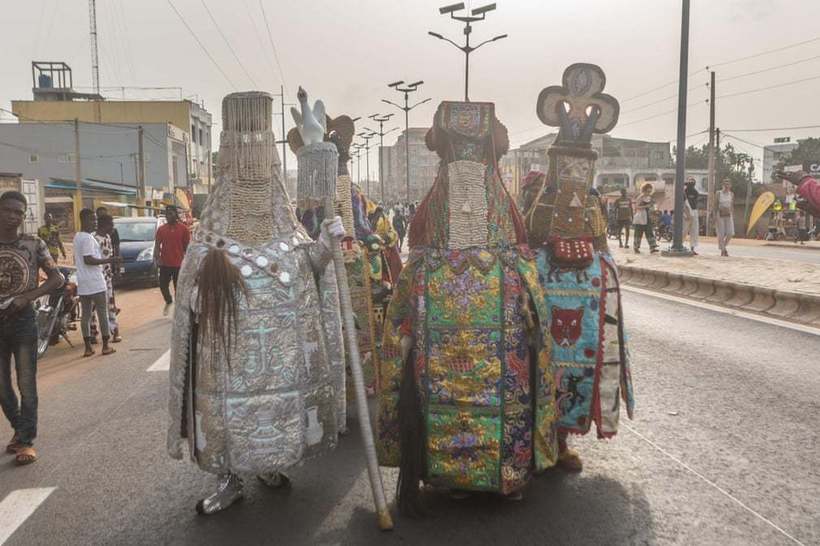 The zangbeto costume are the guardians of voodoo 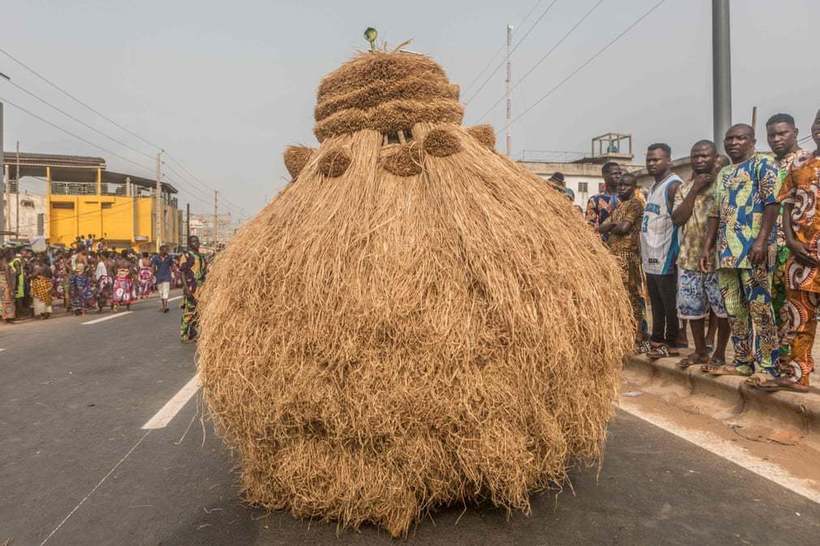 According to local beliefs, zangbetos are a kind of unofficial police officers: they hunt down criminals and punish them 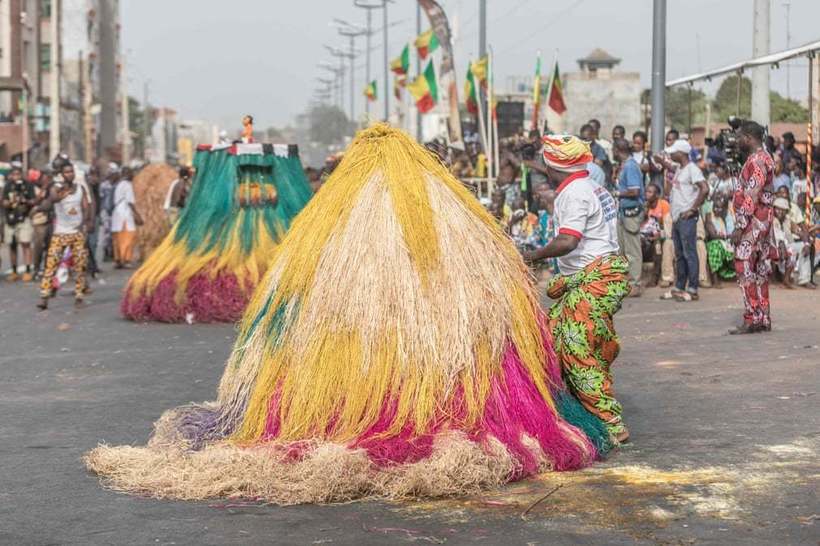 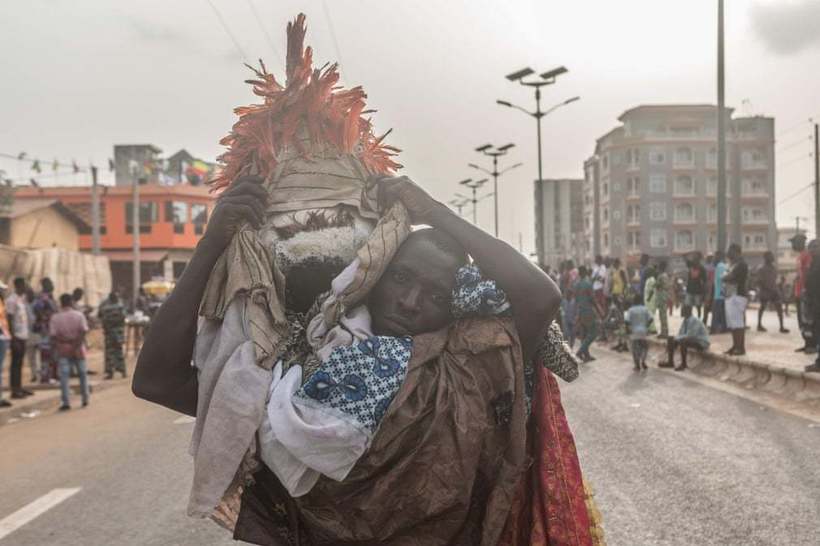 About 17% of Benin’s population are voodoo followers. 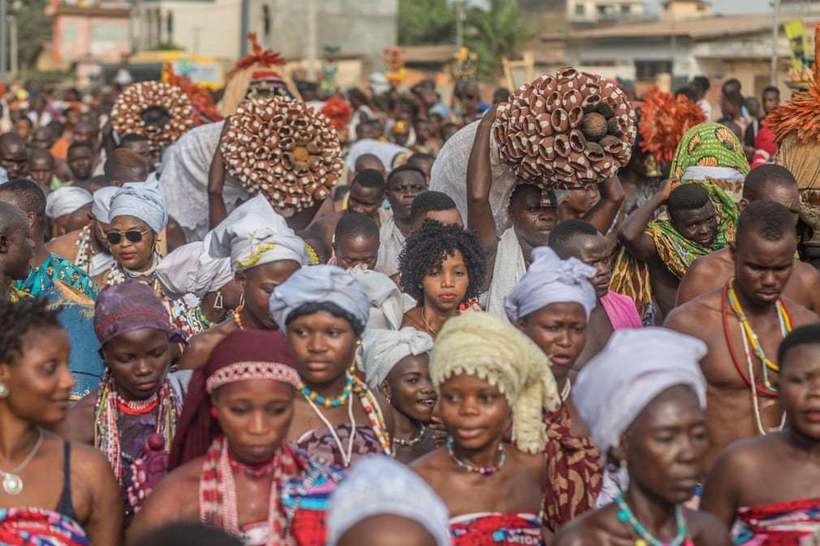 But almost all of those who consider themselves Christians (about 42% of the population) also believe in syncretic cults. 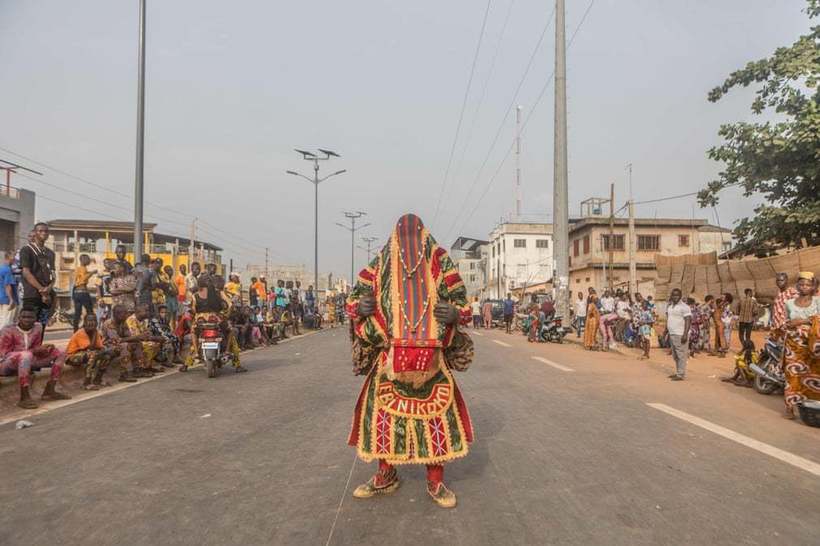 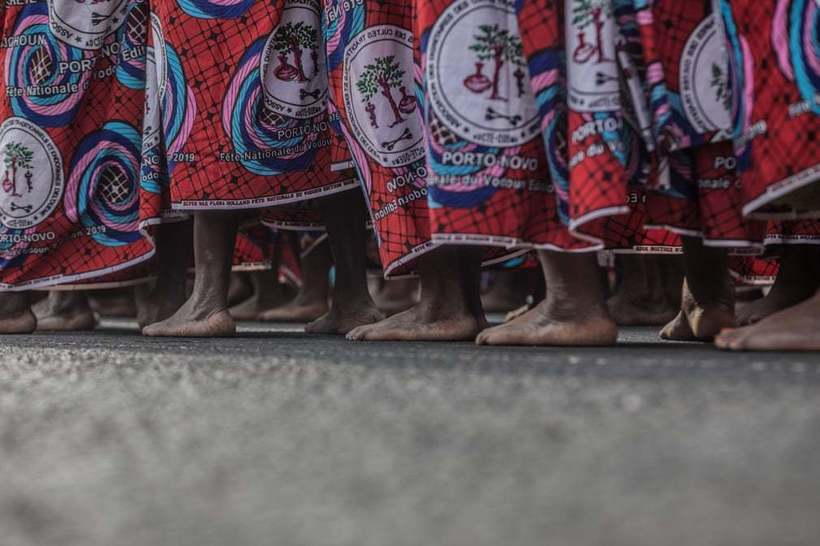 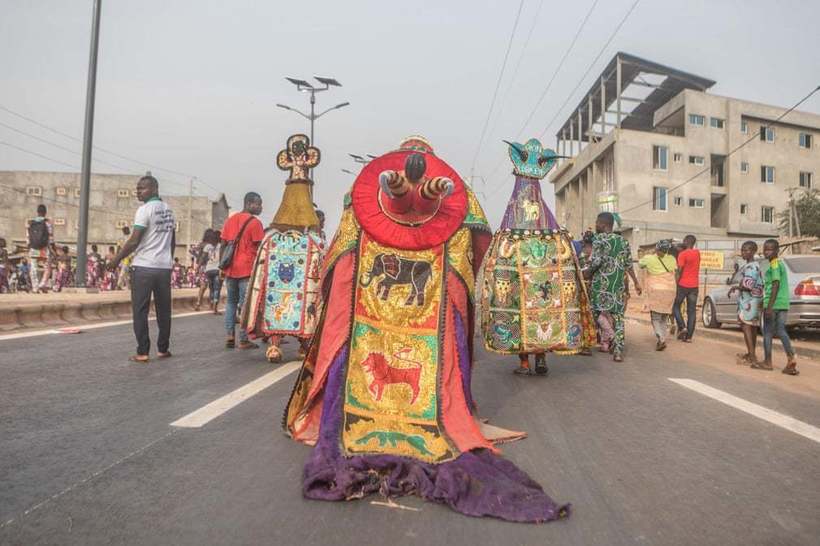 Spectators. Voodoo is very popular in the Caribbean, a belief brought to America by African slaves. 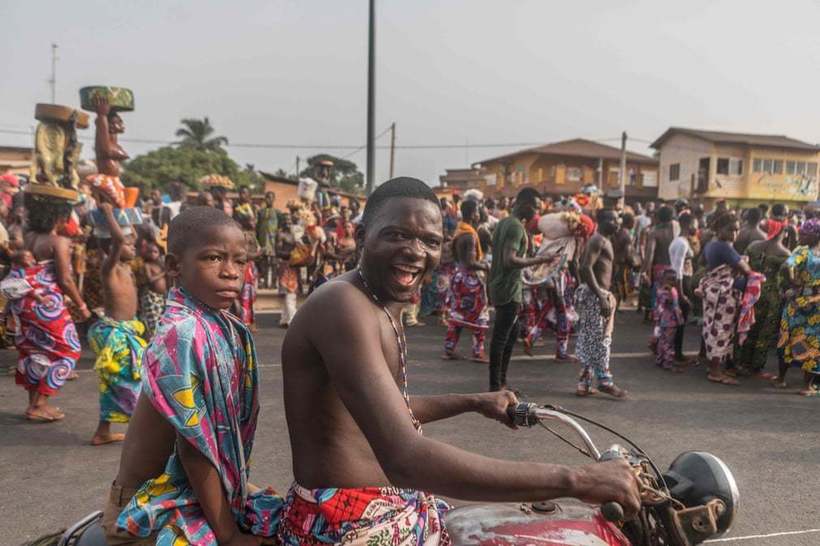 Women and children are also in the parade. 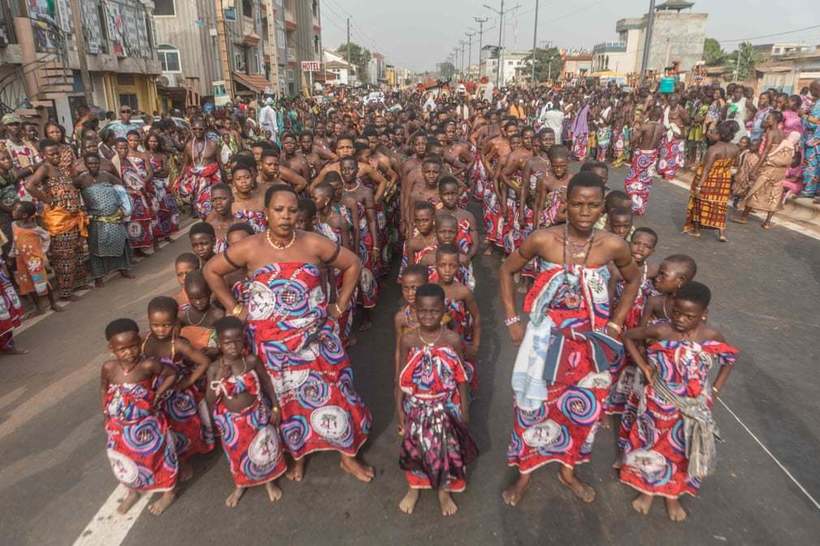 More than a thousand costumes and masks were used in the parade. 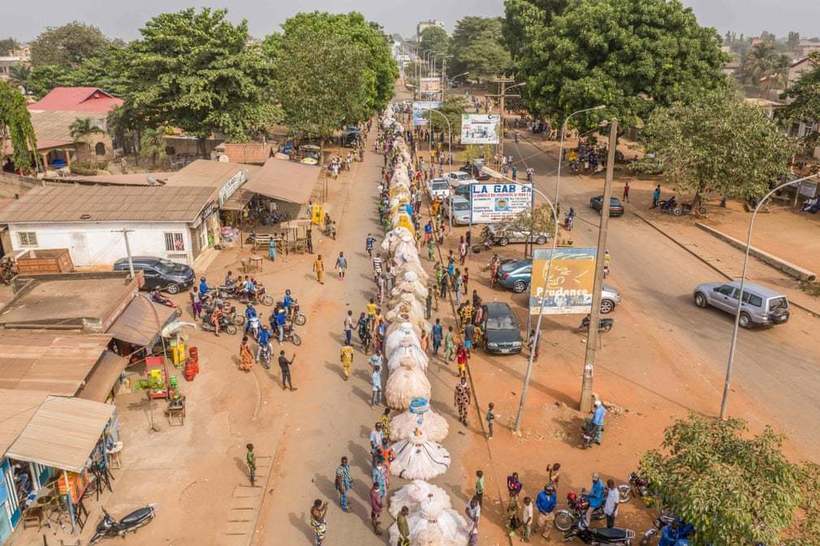 The festival is still young: it was first held in January 2017, but it has already become a tradition for Benin 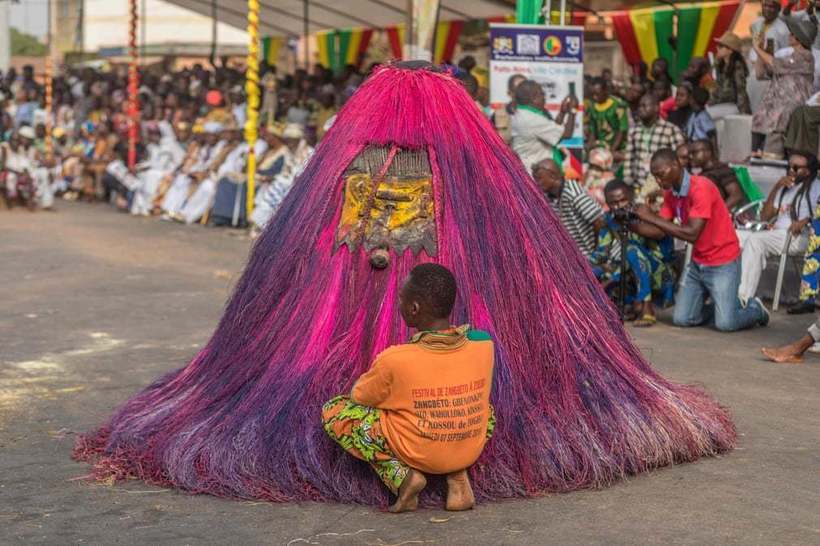