Berchtesgaden, Germany, is the name of a town, district, and park in the southeastern part of the Bavarian county. It spreads out in the German Alps and borders the Austrian lands.

How to get to Berchtesgaden

You can get here in two ways. The first: from the Austrian Salzburg. The distance to it is 30 kilometers. The second way is from German Munich, which is 180 kilometers.

There is a bus number 840 between these cities. Travel time is about 45 minutes. Departure in Salzburg – from the square in front of the railway station building. You can buy tickets from the driver. Journey price is around 15 EUR.

Trip by train will take a little longer. You have to change in Freilassing.

There is no direct connection between points. Trains will cost about 40 EUR. The trip takes 3 hours. Change in Freilassing. From Munich you can travel by bus through Salzburg. It takes more than 3 hours. The fare depends on the carrier. It is cheaper to use the service FlixBus.

When moving around Bavaria it is advantageous to get a “Bavarian Pass” for 30 EUR. With it, a group of up to five people has the right to use all local public transport throughout the day.

Berchtesgaden’s train and bus stations are close by, half a kilometer away from the center of the town.

The trip by private transport from Munich will take about two hours. You will have to spend about 30 EUR for gasoline.

Berchtesgaden National Park is located within walking distance from the city center. You can also get there by bus. Local hotels offer their guests “guest card”. It gives the right to free travel on public transport and discounts to visit some attractions Berchtesgaden and the surrounding area.

The first mention of the settlement dates back to 1102. From the Middle Ages to the beginning of the 20th century salt was produced there. Today the salt mines are one of the main tourist attractions. In the nineteenth century, the area was the residence of the aristocracy, dukes and royal family.

Today, many people associate the community with the personality of Hitler and the Third Reich. The Führer had stayed in this area since the early 1920s. In 1933, he bought a cottage in nearby Oberzalzberg and named it Berghof.

In 1938 the “tea house” Kelsteinhaus was erected not far from the villa for the Führer. It is better known as the Eagle’s Nest.

Adolf Hitler bought the Berghof for the money he earned from the sale of his book My Struggle. Here he lived, held meetings and meetings. “The Eagle’s Nest” was built as a gift to the Führer for his 50th birthday. The Führer only appeared in the Kelsteinhaus a few times.

On the grounds of Oberzalzberg were the residences of some high ranking Nazis, part of the Reich Chancellery, and bunkers. All structures were subjected to bombing and destroyed during and after the war.

The community and the surrounding area will appeal to fans of historical and cultural monuments, nature and winter sports.

The historic center of Berchtesgaden is attractive because of its ancient architecture. Most building facades are decorated with paintings, frescoes and stucco. Among the monuments of architecture:

The walk through the center can be completed by a visit to one of the viewing platforms. The Jenner mountain is very popular. It can be climbed by cable car from the pier of the lake Königsee.

The village belongs to the state of Berchtesgaden in Germany.

There is a documentary center-museum “Obersalzberg”. dedicated to the history of the Nazi era. It can be reached from the train station by bus number 838. The museum is open from November to March from 10.00 to 15.00, from April to October from 9.00 to 17.00. Day off – Monday. Ticket price – 3 EUR.

From museum “Oberzalzberg” daily from 8:30 to 16:00 p.m. tourist “beads” ply to “Eagle’s Nest” (Kehlsteinhaus) . The house is located on the mountain Kehlstein, which offers a picturesque panorama of the region. Private cars are not allowed to reach it. From the foot up through a tunnel in the rock rises the “Golden Elevator” (the brass finish is preserved from the time of Hitler). You can get into the cabin only as part of a tour group of 20 people or more. There is also a souvenir store and restaurant.

The entire complex is open from May to October. The cost of the tour with the road and the elevator will be about 20 EUR.

Visitors await: a train ride in and out of the adit, a ride down the chute and on a raft on the underground lake, a laser show. Guests are provided with special overalls. It is forbidden to take pictures. Employees of the complex take group photos of the tour group. The cost of one photo – 10 EUR.

You can take bus 840 from the station to the place. Or you can walk about 1.5 km to the north.

This is the deepest alpine lake, with underground springs and springs. Its water is clean and always cold. Boat trip costs about 15 EUR and lasts a total of an hour.

One of the stops is at the island of St. Bartholomew. There is a church of XII century.

It is also worth seeing:

You can choose a route on site at the information center at the entrance to the biosphere reserve. The second option: read the photos of the German national park Berchtesgaden in advance on the network and make a plan to visit in advance.

The ski season lasts from December to April.

In Berchtesgaden there are hotels, family pensions, guest houses in various price categories. Double room costs an average of 70 EUR per night. 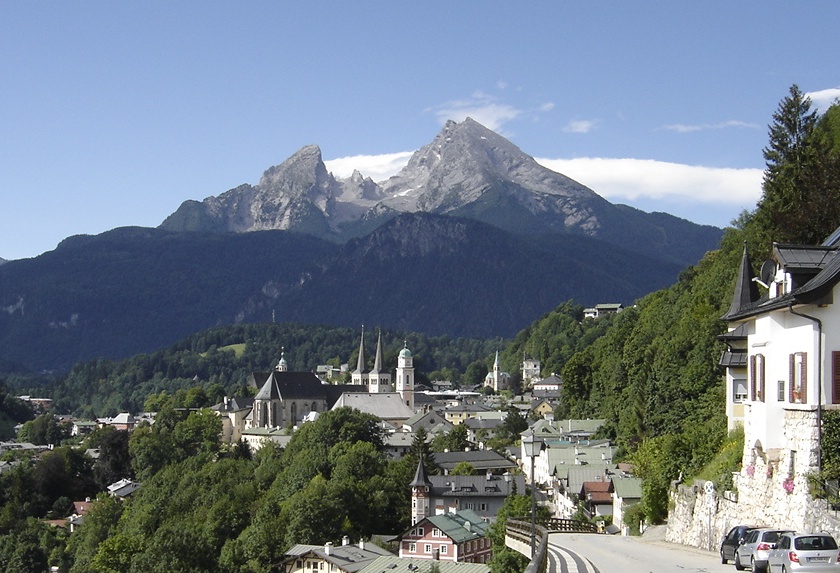 Surrounded by the Bavarian Alps, Berchtesgaden is a small town with picturesque nature and ancient architecture. What is this German region so famous for, and what significance did it have for the most sinister man in history, Adolf Hitler?

Tourists come here year-round to enjoy the alpine beauty and master the skiing sports. The main wonders of this southeastern region of Germany is the second highest peak Weimann (2713 m) and crystal clear emerald lake Königssee.

The uniqueness of the pristine nature has not gone unnoticed by UNESCO, which in 1990 included the National Park Berchtesgaden in its list of historical heritage. For hiking it is best to choose the village itself with its cobbled streets and colorful “gingerbread” houses.

However, Berchtesgaden became famous in modern history for completely different reasons. Nearby on top of the mountain is the Eagle’s Nest, a tea house built for Hitler. The Führer’s Villa Berghof, which had been the headquarters of the party leadership since 1933, was completely destroyed during World War II by the British Air Force and turned into a documentation center showcasing the country’s dark Nazi past. 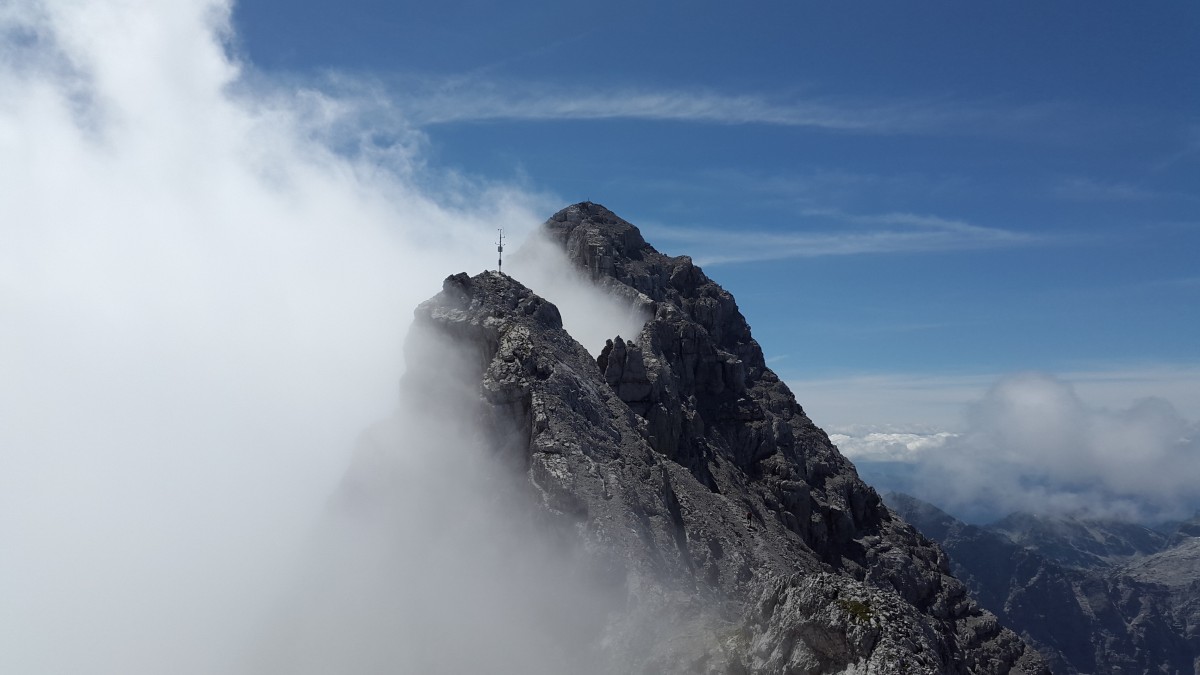 What’s a must-see in the city in Berchtesgaden

The main sights are located in the vicinity of Berchtesgaden. It seems to have emerged out of myth and legend, delighting tourists with a multitude of interesting places.

Eagle’s Nest. It is located on the mountain Kelstein with steep steep slopes at an altitude of 1834 meters above sea level. It was built by order of Martin Bormann as a gift for the 50th anniversary of Adolf Hitler, which involved 3,000 workers. The tea house boasts a picturesque view of the surroundings, but ironically, the Führer himself did not enjoy it due to severe vertigo. Address: Kehlsteinhaus, 83471 Berchtesgaden Open: May to October Ticket:

Obersalzberg Archive. Distance from the city – 3 km, since 1933 the building has been used as the southern headquarters of the Fuhrer government. The archive is an exhibition showing a dark era in the history of the region. It tells about the seizure of the neighborhood, the views and policies of Hitler, the life of the Nazi elite. Shuttle bus 838 runs hourly from the city to the archive. Open: from April to October each week. 09:00-17:00; from November to March Tues. Ticket: 3 EUR for adults, free of charge for children.

Königssee . The most beautiful natural attraction is located 3 kilometers south of Berchtesgaden. The crystal-clear emerald reservoir, surrounded by mighty mountains and forests at an altitude of 603 meters, gleams mysteriously. The church of St. Bartholomew is built on the western shore of the lake and can be accessed by motorboat (adult/children 13.30/6.70 euros). At the pier there is a trail leading to the Ice Chapel. From the city there is a shuttle bus number 841 to the lake every hour.

Salt Mine. Once renowned as the largest producer of salt, the salt mines are now used for excursions. They last an hour and a half and are especially fascinating for children. Visitors are encouraged to dress up as miners and descend a wooden chute into the bowels of the tunnel. The salt grottoes and the ride on a raft through the salt lake complete the experience. Open: May – October 9 a.m. – 5 p.m., November – April 11 a.m. – 3 p.m. Adult ticket: 15.50 €, children: 9.50 €.

The Royal Palace. Built as a monastery for the Augustinian Order, it was later converted into an estate by the Wittelsbach dynasty. Thirty rooms are open for viewing, preserving antique furniture, porcelain, tapestries, and art objects. There is also a beautiful rose garden with a view of the mountains. Address: Schlossplatz, 2 Ticket: adults 9.50 euros, children 3 euros 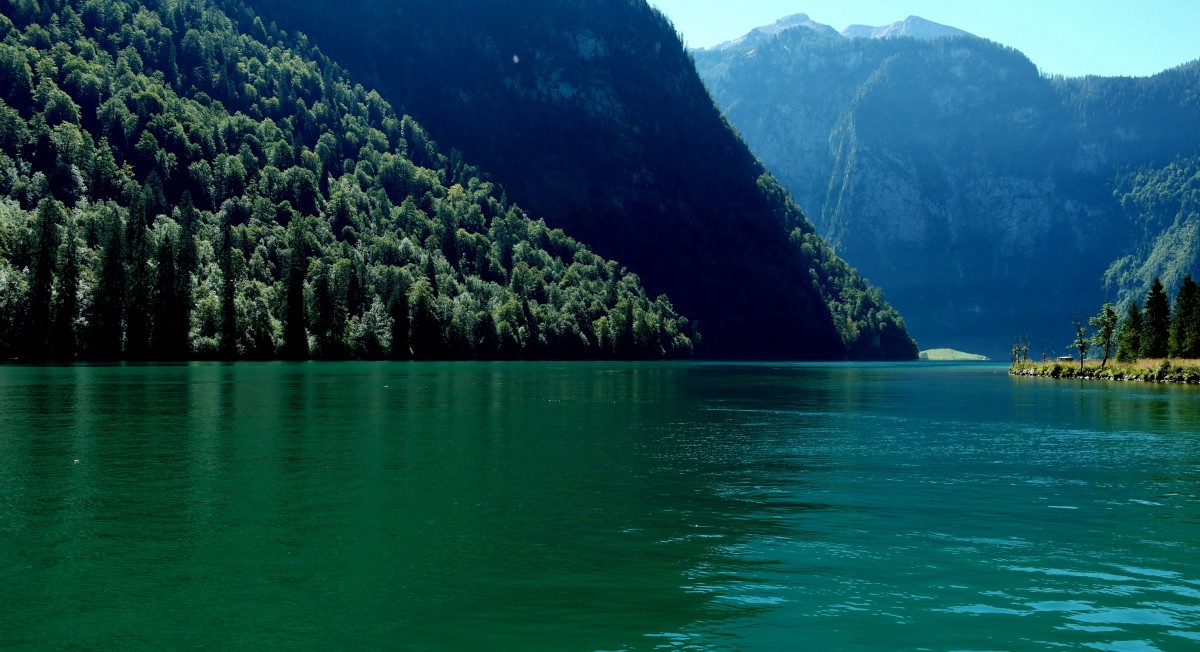 Interesting things to do in Berchtesgaden

READ
What sights to see in Budapest by yourself?

Where to taste the best national dishes in Berchtesgaden

You can buy fresh meat, vegetables and dairy products at the farmers’ market from April to October every Friday at the Markplatz.

After passing the arch with Bavarian diamonds and old beer barrels, you can find yourself in the secluded courtyard of the local brewery, which turns into a feast of Bavarian food every Saturday. Address: Brauhausstrasse, 13

Gastatte St Bartholoma. The restaurant can only be reached by boat, as it is located on the edge of the lake. An exceptional tourist spot, the dishes are made from everything collected in the vicinity or caught in the lake and forests. You must try the venison in mushroom sauce with sauerkraut and fragrant dumplings. Address: Barholoma

An unassuming-looking log cabin is actually a great place to socialize with the locals. The most popular dish is a juicy pork roast, which should definitely be washed down with dark Bavarian beer. 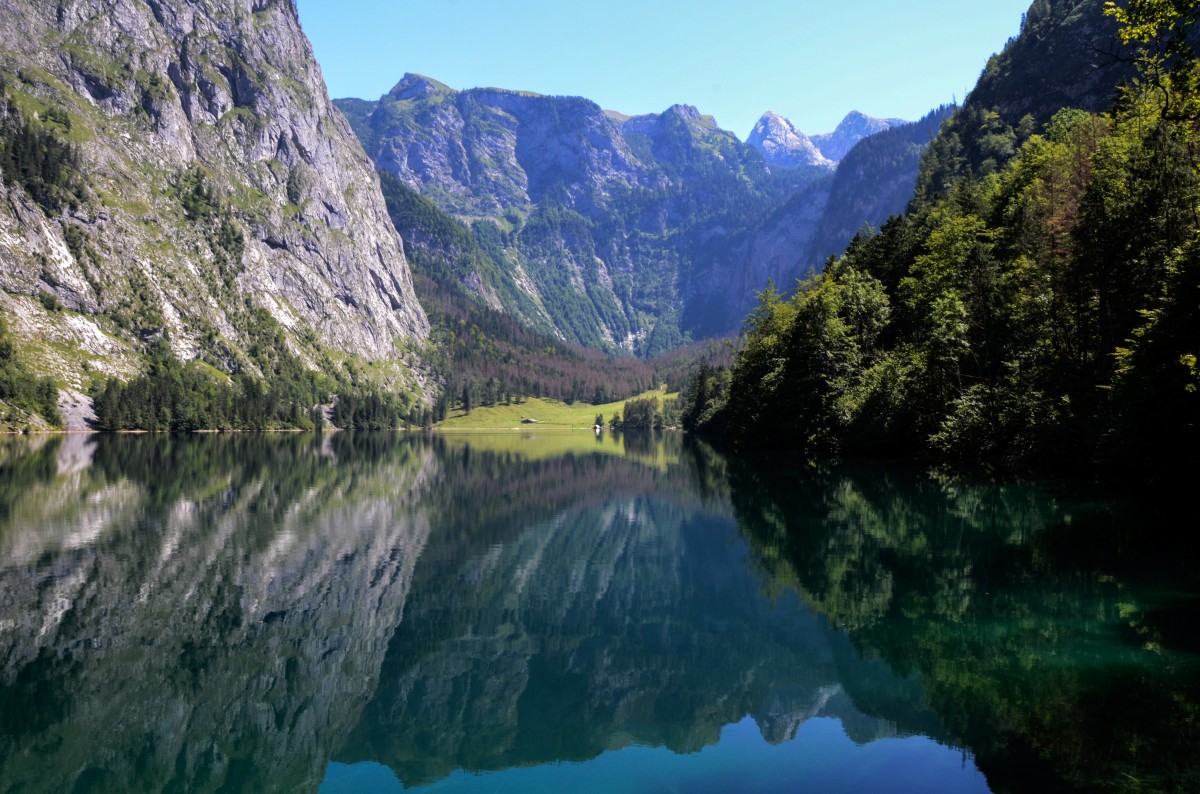 How to get to Berchtesgaden?

How to save on public transport?

Buy a tourist card for 2 euros and use public transport the whole day without restrictions. It also gives a discount to visit some museums and thermal springs. Cabs are very expensive – at least 20 euros.

What to bring back to your loved ones from a trip?

A bag of local salt, a salt lamp or a bottle of local schnapps. 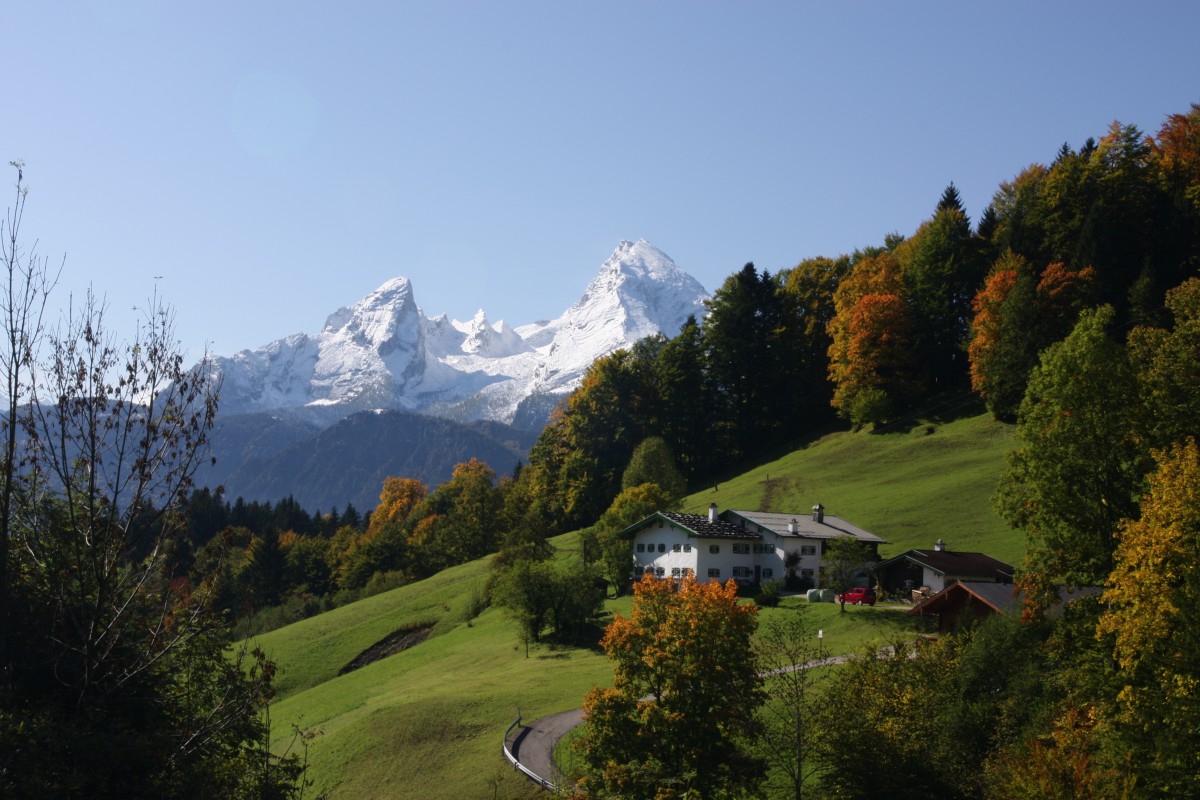 For a video about Berchtesgaden, see the link below:

Instead of hotels you can book an apartment (cheaper on average by 1.5-2 times) on AirBnB.com, a very convenient worldwide and well-known service for apartment rentals with a 2100-ruble bonus upon registration