Beria’s house is an ancient building built in the late 19th century and has a great history. Currently, the Embassy of Tunisia is located here. However, for Muscovites this building is associated with the Soviet era.

To control it press the left mouse button and turn in any direction. Watch the virtual tour on the full screen for full immersion.

MORE INFO: ADDRESS. TELEPHONE. HOW TO DO IT

Beria’s house is an ancient building built in the late 19th century and has a great history. Currently, the Embassy of Tunisia is located here. However, for Muscovites this building is associated with the Soviet era.

The history of the building goes back to 1885. It was built for the Moscow mayor S. Tarasov. He did not serve long in his position – he fell ill. After that he was appointed chairman of the Commission for the distribution of benefits from the capital for donations. In this position he worked for the rest of his life. Thanks to him, large sums were sent to the city treasury. It is worth noting that the architect of the Tarasov building was V. N. Korneev. He was known to a wide circle of people and was a member of the council of architects at the Moscow City Duma. However, after the Moscow Merchant Society building he designed collapsed, Korneev was brought to justice.

Since 1911, the Bakakin-Mindovsky family had lived in the Berea house. The daughter of the famous heir and leader of all the factories AI Mindovsky – Ivan Mindovsky, married Alexander Ivanovich Bakakin. He, in turn, was the son of Ivan Bakakin, the guardian of the young Peter Galaktionovich Mindovsky. A close relationship with Pyotr allowed the Bakakin family to become very wealthy. However, in 1914 Alexander Bakakin and his wife died. After their death in the 1930s, their house was purchased by Lavrenty Beria. He was an important state figure. He was the head of the NKVD and was also responsible for the construction and development of all of the country’s nuclear weapons. It was his name that stuck in the name of the current landmark with a creepy history. On July 26, 1953, Beria was murdered in his home by a capture team. He was accused of treason against the motherland. There is no evidence in the case. This and much more is discussed in detail in the investigative film by Sergei Medvedev.

Beria’s house is one of the top mystical places in Moscow because of the legends that pervade the building. Rumors circulated that even before Lavrenty Pavlovich moved here, citizens undesirable to the regime were regularly shot in the basement. Girls were afraid to pass by this building. At Beria’s order they could be grabbed and brought into the house by force, after which they would disappear forever. There is information that instruments of torture were found in the basement during the renovation of the building. According to the stories of citizens passing by, Beria’s ghost has not left his house and often shows itself to its visitors. And at night you can even hear someone’s footsteps and breathing. There is, of course, no scientific explanation for all this, but there are plenty of eyewitnesses. It is also noteworthy that in this building was filming the program “Battle of the Psychics”. Even the participants in the program felt the ominous aura of the house, associated with the terrible events that occurred here.

In addition to the house, Lavrentiy Pavlovich had a dacha, which was also permeated with ominous tales of the abduction and murder of girls. It is located at 5 Luchevoy prosek, 14, building 1, in the Sokolniki district. This building is a very atmospheric and frightening place. Many tourists come there with pleasure to learn more about Beria’s biography. Now the House of Beria is the embassy of Tunisia. Find it at 28, Malaya Nikitskaya Street. 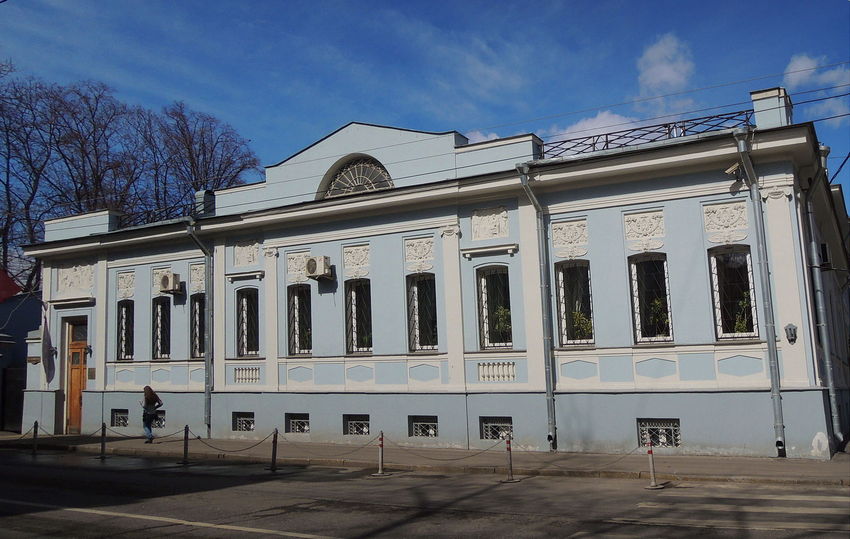 During Soviet times, Lavrenty Pavlovich Beria lived in a Moscow mansion on 28 Malaya Nikitskaya Street. Today the Tunisian Embassy is here, but some still bypass this building. There are many gloomy legends associated with the house, where the apartment of the former Commissar was located, and psychics claim to feel “fear vibes” and see vague outlines of frightened girls.

The mansion was built in the 19th century by the architect Vasily Karneev for the mayor S. Tarasov. He didn’t stay in his position for a long time, only half a year. In 1885 he resigned for health reasons. The Moscow mayor left a “neutral” trace in the history of the capital, since nothing outstanding happened during his rule.

Since 1911 the Bakanins-Mindovskys became the owners of the house. Later the building was reconstructed according to the project of architect Adolf Erichson – the ceilings were raised and the rooms were enfiladed. There appeared an additional two-storey annex with apartments for rent. The building was accomplished in neoclassic style. The garden and an apartment building were also included into the architectural complex.

The house used to be owned by different officials and businessmen, until in 1938 its new owner, Lavrenty Beria, appeared. The Commissar of Internal Affairs of the USSR settled there with his wife Nina, the first beauty among the wives of the ruling elite. The mansion generally met the construction standards of those times, despite the fact that it was built much earlier. Beria’s house had a gala appearance and the height of the rooms was 3.2 meters.

The head of the NKVD had a weakness for women. There were rumors about his numerous mistresses, and not everyone had an affair with a politician of their own free will. Women were brought by car to the mansion or to the summer house in Sokolniki, but some of them did not leave the mansion and disappeared without a trace. Nina Beria’s wife recalls freshly dug soil in her rose garden, which she would periodically discover. Her mind suggested that something wrong was going on, but the woman deceived herself, “turned a blind eye” to her husband’s adventures and continued to believe him sacredly.

Lavrenty Pavlovich was shot on December 23, 1953, a few months after Stalin’s death, after being accused of espionage. However, his son Sergo claimed that his father had been shot during his arrest back in June. And the trial was allegedly a mere farce. Nevertheless, it is still unknown where the body has gone. There is no record of burial or cremation.

Beria’s house was named after the last owner. Despite the fact that it now hosts the Embassy of Tunisia, historical facts firmly associated it with a famous Soviet figure.

Beria’s house has no outstanding architectural elements. The façade is unassuming in the white and blue colors typical of the early 20th century. But inside there is a wonderful interior with a marble staircase, glass doors with crystal, gilt mirrors, and ceiling molding. In the room – antique furniture upholstered in silk.

On the facade of the building – Empire relief with a scene from ancient mythology. 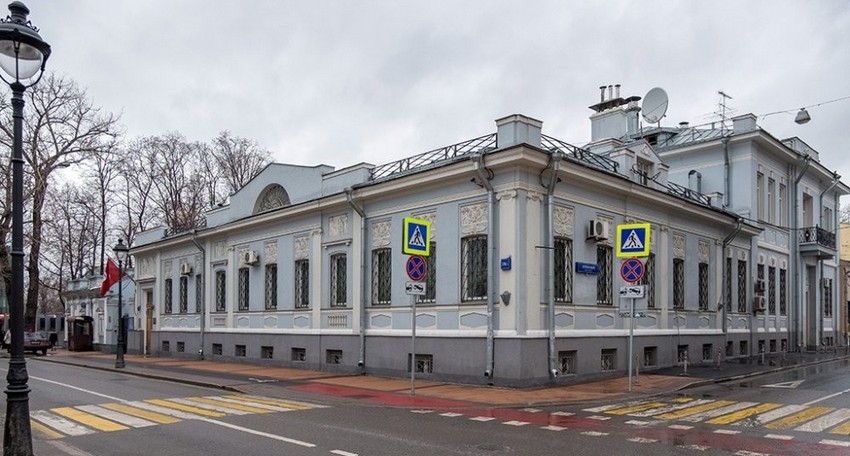 Until now there are legends about strange phenomena happening in the mansion and the adjoining territory. Allegedly the spirit of the former People’s Commissar periodically appears in the walls of the house. Eyewitnesses testify to this. They say that sometimes someone invisible messes with documents and moves objects. At night you can hear someone’s breathing, footsteps and coughing. And this happened more than once.

Other inexplicable phenomena are also known. For example, at night every month an invisible car drives up to the house. Eyewitnesses were able to discern a luminous dot and even heard the sound of an approaching car. The invisible car stops near the house, which is indicated by a turned off engine. Sometimes voices are heard, drunken laughter, footsteps heading inside the mansion, after which the car drives off in an unknown direction.

No one knows for sure if there is a place for mystical events, or if it is just a play on the imagination of frightened people. The fantasy is fueled by people’s tales of a terrible find in the basement of a house that was discovered during repairs by Tunisian embassy employees. There is talk of a torture instrument and a stone crusher, allegedly used to process the bodies of tortured victims. Rumor has it that Beria preferred to torture some “prisoners” himself.

According to other sources, a crematorium was discovered in the yard of the mansion, where the bodies were burned. In the house itself, found a lot of women’s things, because Beria often left something to remember his charming captives. Sometimes teenage girls became the victims of the junkie, as evidenced by the found clothes in children’s sizes. Rumor has it that the service record of Beria more than 200 members of the fairer sex.