Berry Pomeroy was built around the 12th century on land granted to Ralph de Pomeroy by William the 1st Conqueror as a reward for his loyalty and support during the Norman invasion of the island. For the next 500 years the castle was in the possession of this family. In 1549 the surrounding lands were given to Sir Edward Seymour when Thomas Pomeroy became implicated in a religious revolt against the king.

The new owner built a mansion on the estate inside the walls of the Norman castle. During the Civil War, the castle was overrun when Oliver Cromwell and his “Roundheads” confronted the Royalist cavalry. But on the whole it survived in those days, as it was an important stronghold, dominating the surrounding countryside. It was destroyed by a fire at the beginning of the 18th century, after which no one wanted to settle in it because of its grim history.

The castle is haunted by several ghosts of the Pomeroy family.

Legends about them were passed on among the locals for several centuries, but did not become widespread until the end of the 19th century. The castle owes its popularity to the famous physician Sir Walter Farquhar, who told part of these legends in his memoirs. In particular, Farquhar recounted how he was once summoned to see the sick wife of one of the servants. As the doctor was sitting in the room, a beautiful young lady dressed in all white entered. In desperation, wringing her hands, she approached the doctor, looked him straight in the eye, and disappeared.

The next day the doctor came to see the sick woman again and again saw the strange lady dressed in white. The sick woman’s husband was desperate. He explained to the doctor that the “white” lady was one of the omens of death, and her appearance meant the imminent death of either one of the family members of the castle owners, or someone directly related to them. A few hours later the sick woman passed away.

READ
Dunnottar Castle in Scotland, the story of the legend

If family legend is to be believed, the “white” lady is the ghost of the former castle owner’s daughter. During her lifetime she was unusually cruel. As punishment for her sins, the heavens condemned her to be a ghost in the castle. As the locals claimed, the “white” lady wandered around Berry Pomeroy Castle as well, luring those who saw her to dangerous places.

Another ghost said to appear in the ruins is Lady Margaret Pomeroy, who in her lifetime was in love with the same man as her sister Eleanor. Out of jealousy, the latter imprisoned Lady Margaret in one of the towers, where she starved to death. This tower is now called St. Margaret’s Tower. Sometimes the ghost of this unfortunate woman, clad in white robes, appears in the place where her dungeon once stood, and begins to wander around the ruins. On the same day of the year, a blue glow appears in St. Margaret’s Tower, usually visible in the evening. This blue light has been observed by people before, including Peter Underwood and his colleagues, during their nighttime explorations here several years ago.

Finally, the third ghost is a woman in a white robe with a blue hood, the “Blue Lady. She is dressed in long blue hooded robes, and there is a rumor about her that she tries to seduce men, driving them to their deaths in a vain search for salvation or help in dangerous corners of the castle.

This ghost seems to belong to the spirit of the baron’s daughter of Norman times, who, after a criminal affair with her own father, gave birth to a child, and the father soon killed the unfortunate child in one of the upper rooms of the main tower of the castle.

According to another version of the story, it was she herself who killed the child, hating it with all the strength of her soul. And now she herself has no peace and wrings her hands in despair. Sometimes she weeps for her dead child, and her cries can be heard throughout the castle.

Modern research at Berry Castle Pomeroy testifies to many cases of visions, shadows, photographic “errors”, paranormal sounds and other incomprehensible things. It has been documented that some visitors who have taken small “souvenirs” from the castle, such as pebbles or the like, have tried to take them back, because they felt that these objects gave off bad omens and a growing sense of terror that haunted them upon their return home. 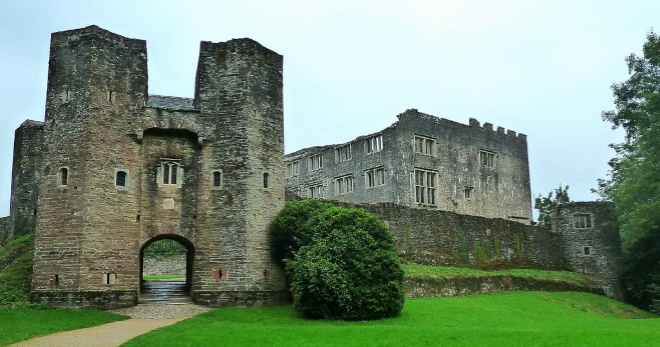 In south Devon, a mile from the village of Berry Powmroy is the castle of the same name. It is an old Tudor-style mansion built within the boundaries of an older Norman castle. Today Berry Powmroy Castle is a popular tourist attraction, mainly because of the legends of ghosts that supposedly can be seen on its territory. The castle is on the List of Protected Architectural and Historic Sites, Grade I.

The family name Poumroy, or rather, Pomeroy, has Norman roots. Having come here with William the Conqueror, the Pomeroys were rewarded for their loyal service. It is known that in 1268 it was members of this family who built the town of Bridgetown on their lands. In 1207, one of the Pomeroys, Henry, put up 10 acres of deer park and annexed it to his local village of Berry. The exact date when Berry Castle Pomeroy appeared on the map of England is unknown: it is first mentioned in 1496.

In 1547 the castle and its lands were sold to Edward Seymour but it retained its name. Edward Seymour was an important and influential political figure in England (including 2 years as President of the Court of Peers and Chief Marshal of England). He lost all his positions in 1549 and was executed in 1552. 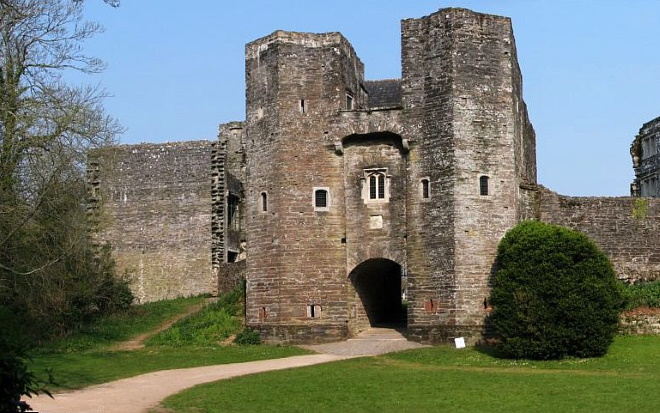 Edward Seymour’s eldest son, also Edward, for some reason did not inherit his father’s estate (it may have been confiscated by the Treasury), but in 1553 he bought it and made it his residence. He began erecting the mansion on the territory of the castle, inside its protective structures, in 1560.

A rather compact mansion with three wings was built in Tudor style in 1560. A new wing along the north-west wall of the castle was added by his son, another Edward. The new part of the building contained a huge hall with fashionable loggias, a study and another room, and a tall kitchen. Along the upper floor was a 63 m long gallery. Terraces were also begun, but were never completed.

In the last two decades of the 17th century the castle began to deteriorate – the family apparently had no money to buy expensive building materials. As a result, the Seymour family simply moved to another of their estates in Wiltshire, where there was a more modern (and more modest) house.

In the nineteenth century the ruins of the castle became very popular with artists who came here to depict what was left of the castle on their canvases. In 1830 the Duke of Somerset, the owner of the building, carried out restoration work during which part of the walls were rebuilt and much of it mothballed. At the end of the 20th century extensive archaeological excavations were carried out. 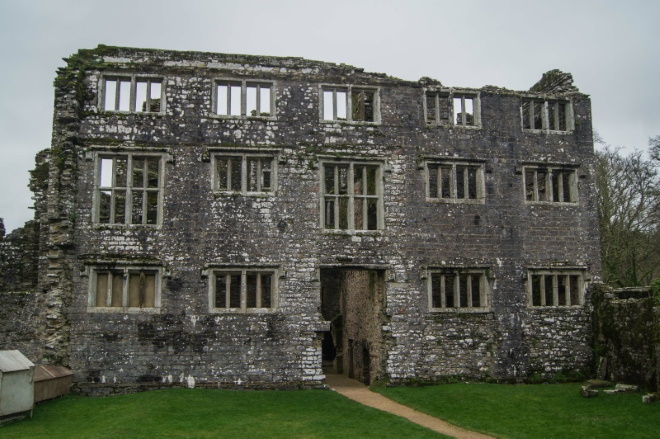 It is believed that the castle is haunted by 2 ghosts, both female: Lady-in-White and Lady-in-Blue. “The White Lady” is Margaret Powmroy, who died in prison because of the jealousy of her older and less beautiful sister Eleanor: the sisters were in love with the same man, and he favored the younger one. An encounter with this ghost does not bode ill, unlike an encounter with the Blue Lady. The latter is believed to be the ghost of Earl Norman’s daughter, who killed her own child, born as a result of her own father raping the girl. It is said that to see the “Lady in Blue” is to die soon. 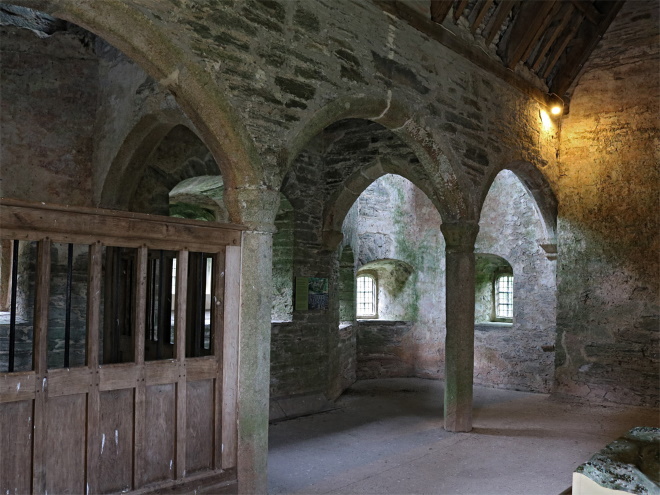 How to visit the castle?

Berry Powmroy Castle is 196 miles (about 315 km) from London and can be reached by car on the A303 in just over 4 hours, or by plane from London to Plymouth and from there by Devon Expy/A38 and A385 in under 50 minutes. Contact the reception to find out exactly when the castle is open for visits.