The Bimini Road is about 700 meters of track on the ocean floor, lined with rectangular, smooth limestone blocks. There is still controversy about the origins of the road, it is one of the world’s mysteries. The Bimini Road is located off the northwest shore of North Bimini Island.

Some scientists are inclined to believe that the Bimini Road is a trace of a lost civilization, while others are convinced that the path is of natural origin.

Many divers want to see this miracle of nature and try to understand whether man at one time had a hand in the road or the smooth stones are the result of some natural phenomenon.

By the way, the islands of Bimini are also known for other natural monuments, which have inexplicable properties. These include the Healing Grotto with water that makes you feel better mentally and bodily, and the Fountain of Youth, a lost source of eternal life and beauty, which is located somewhere off the coast of South Bimini.

In 1932, in a “reading” 364-3, the American psychic Edgar Casey, when asked where to find traces of the sunken Atlantis, stated that one such place was the coast of Bimini. And indeed in 1968 near North Bimini at a depth of 5.5 meters zoologist Manson Valentine found a group of stone blocks, collectively similar to the road.

This formation became widely known as the “Bimini Road”. The “road” is 0.8 km long. The square-shaped limestone blocks with rounded edges give the impression of being hand-carved.

A huge number of archaeologists, geologists and simply amateurs have surveyed the road. In addition to the main road, two additional roads, roughly parallel to the first one, were discovered. The roads are composed mainly of flat and rectangular stones. The large one (the first of those found) consists of stone blocks, with an average length of 2-4 meters. The other two are narrower and shorter, with stones 1-2 meters in length.

There are arguments both in favor of artificial origin and against it. Very few stones are located near these three formations. That is, the roads are formed by a concentration of stones well above the average for the region. There are no other shorter linear concentrations of stones nearby. And the roads found are more than half a kilometer long. Nowhere in the vicinity, except for these formations, is there a situation where one stone is located on top of another.

At the same time in different parts of the world there are various natural formations of rather strict geometric shape. That is why the opponents of the idea of man-made roads consider that these formations could have been formed by the forces of nature.

There have been attempts to determine the age of the find.

In 1978, the University of Miami conducted a radiocarbon analysis based on clam shells found in the formations. Several other laboratories also did the analysis. The average age of the shells was 3,500 years.

Analysis based on the uranium-thorium method and conducted by John Gifford, one of the most famous researchers of this place, showed an age of about 15 thousand years. But how much confidence can be placed in the accuracy of existing age determination analyses? It is known when charred trees were found under the lava basalts in Australia. The age of the tree according to radiocarbon analysis was 45 000 years, and the age of the basalt according to the potassium-argon method was 45 million years. Although they should obviously show the same age.

It is believed that this region was below sea level 15,000 years ago, so the limestone studied cannot be dated to this age.

Bimini in the movies

Take a plane to Nissau, the capital of the Bahamas, and then take Continental Airlines or Bimini Island Air domestic to North Bimini Island.

Bimini Island Air services are not recommended because the planes do not depart on time and luggage is often lost.

The Bimini Road is a stone sidewalk at the bottom of the ocean. The Bahamas

For half a century, historians, geologists, archaeologists, ordinary divers and amateur explorers have been trying to unravel one of the mysteries of the Atlantic Ocean. It is a well-known, but little-studied Bimini Road. It is sometimes called the “Bimini Underwater Road.”

It is a geometrically regular sidewalk, on which are stacked large flat and smooth rectangular stones. This megalithic composition is located at the bottom of the ocean near the island of North Bimini, at a depth of 3 to 9 meters. 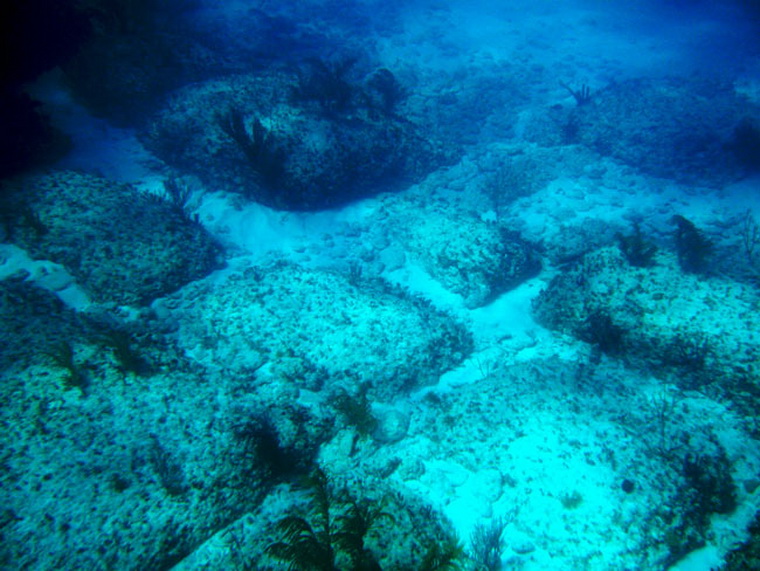 The Bimini Road on the map

It is a combination of properly stacked square and rectangular boulders that form an almost perfect road or runway that is about 800 meters long and up to 50 meters wide. And the road is not the only one. There are two more smaller roads that adjoin it at a slight angle.

The main road is paved with stones, the sides of which reach up to 2-4 meters, but the size of the stones of additional roads is less, about 1-2 meters. All blocks consist of limestone, have rounded edges and are very similar to the work of human (or non-human) hands.

If you look at the schematic layout of these roads, you get the impression that this is an ancient airfield.

Schematic diagram of the Bimini Road

History of the underwater road

The first mentions of this landmark appeared in the 30s of the last century. Then the famous American clairvoyant and soothsayer Edgar Casey said that the road to the legendary missing Atlantis should be sought off the coast of Bimini. Moreover, he claimed that in the late 60’s of the 20th century (tentatively 1968-1969), and it is off the coast of the Bimini Islands will certainly be found evidence of the existence of Atlantis. True, it was not specified then what exactly to look for. But the beginning of the history of discovery was made.

Coincidence or not, but exactly in 1968, the mysterious footprints have indeed been found. And they were found where Casey predicted.

On September 2, 1968, while diving off the northwest coast of North Bimini Island, Munson Valentin, Jacques Majol and Robert Angov first discovered this mysterious structure. As soon as news of the discovery spread across the planet, many interested people began to arrive. Among them were both professional scientists, and amateurs, and ordinary divers, who are not fed with honey, let only to dive deeper and see something incomprehensible and intriguing.

They didn’t bother with the name for long and christened the site simply “The Road of Bimini” after the nearby islands. 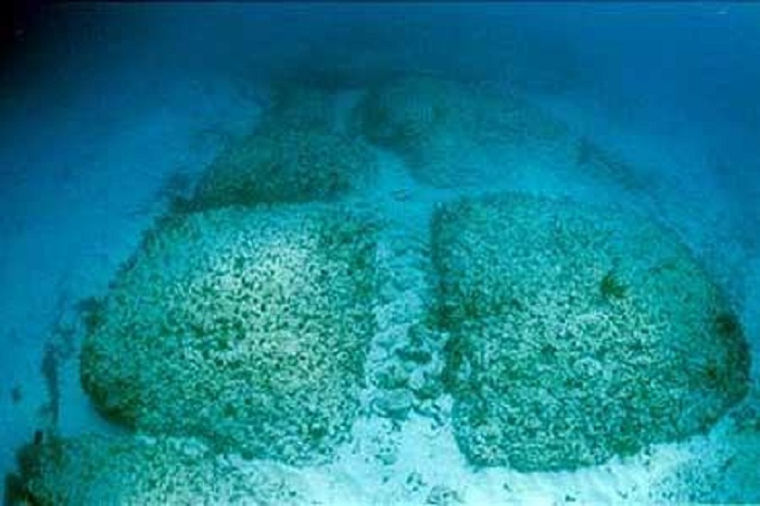 Scientists, of course, immediately put forward a lot of theories about the road’s origin, and began to wage war with each other, proving their version. And versions abounded.

Theories of origin of the Road Bimini

First, it is worth saying that all versions are divided into two types – an artificial and natural origin of the road.

In favor of the natural formation are the facts that on the planet are found the correct natural geometric shapes. For example, the famous Giant’s Path in Ireland. You can take a look, there are almost perfect hexagonal columns that literally sprinkle the entire coast. Or Prekestulen in Norway, where the right rectangular ledge has been overhanging the beautiful fjord for thousands of years. This is why some scientists see nothing supernatural in the Bimini Road. They prove that such a phenomenon could well have been formed by nature and polished by sea currents for centuries. 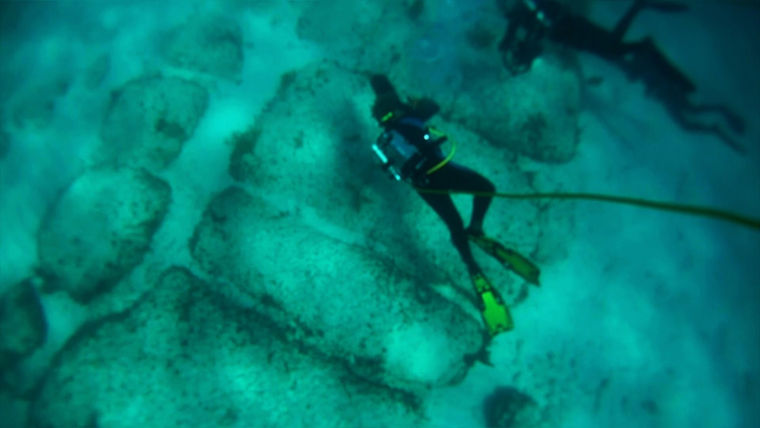 But there are considerably more theories of an artificial origin of the road. Either this is due to the human craving for the unknown, or (which is more likely) with a mass of inconsistencies that refute the versions of natural formation. For example, in this construction there is no chaotic, there is no disorderly piling of stones, none of the blocks “overlaps” with another one. In addition, there are very few stones of any kind in the vicinity.

These are the most common assumptions about the artificial origin of the Bimini Road. It is up to you to believe them or not.

– Bimini Road is an airfield built in ancient times by aliens. It’s a viable theory, considering how little we still know about our planet.

– is a trace of ancient, highly evolved civilizations or the result of dredging operations. The Bimini Road is part of the vanished Atlantis and the first step toward unraveling its fate

– The writer Gavin Menzies claimed that Chinese navigators before Columbus discovered the Americas, but were wrecked in these waters. He believed they had built the Bimini Road in order to haul their damaged ships to the island for repairs.

Several other factors speak in favor of the man-made origin. The blocks include limestone and siliceous shale, which is not found in the Bahamas. Some scientists believe that these are not stones at all and huge artificial blocks cast in ancient times from a kind of concrete. 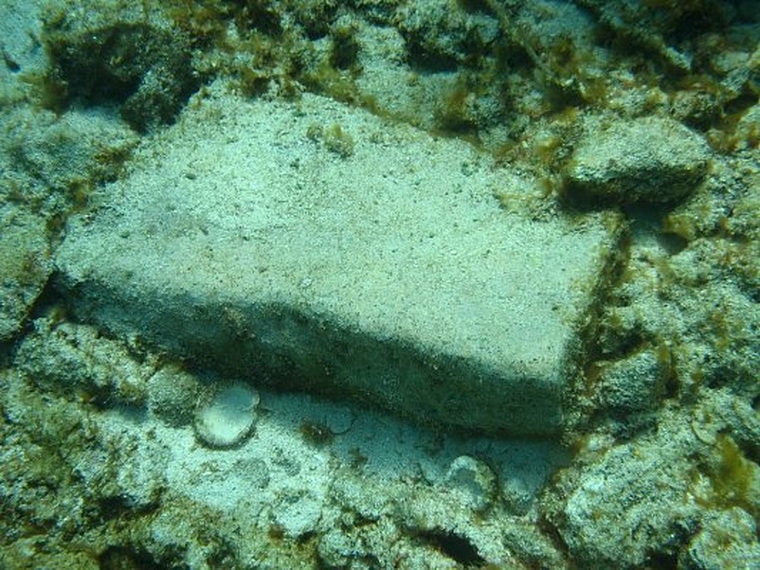 The age of the Bimini Road has not yet been precisely established. According to some sources it is about 3,600 years old, according to others it is about 15,000 years old. This is yet another reason for the battles of the scientific fraternity.

For a long time, scientists could not find out what lies beneath this road, but in 2003-2004, a group of researcher Greg Little discovered under these blocks at least two more similar layers. From this another version was born – the Bimini Road is not really a road, but rather the upper part of walls or some buildings. This is why it is sometimes called the Walls of Bimini. Perhaps it is part of an ancient pier or breakwater. Using modern instruments, the expedition members found that there are voids and even metal in the structure. This is extremely surprising, because there are no deposits of metal neither in the Bahamas, nor nearby the “road.

Myths, legends, and horror stories of the Bimini Trail

In addition to scientific research, the Bimini Road is shrouded in a mythical halo. There is a lot of information (mostly unconfirmed) about mysterious incidents in the vicinity of the Road.

Keep in mind that reliable corroboration of these stories has not been found, after all.

Until now, the Bimini Road remains a mysterious mystery of the Bahamas, attracting tourists from all over the world. This is successfully exploited by the local authorities. They invest a lot of money in the development of tourism business and popularization of local attractions.