An unusual castle made of stone, iron, and colored glass, built by one man, is located in the mountains near the San Isabel National Wildlife Refuge, Colorado, USA. The tall tower is circled by iron spiral staircases and parapets, a circular dome of metal mesh rotates on the roof, a dragon’s head spews fiery flames, and there is even its own bell tower. Jim Bishop single-handedly collected more than 1,000 tons of stones to build this marvel, which he calls “a monument to hard work.” It is the largest single man-made structure in America.

At age 15, Bishop bought 2.5 acres of land for $1,250. He always dreamed of living in the mountains, and in 1969 he left Pueblo and began building a cottage atop a scenic slope. Creating a castle was not part of Jim’s original plans. Because natural stone gathered from the mountains was used for the foundation (“We were too poor to buy ordinary building materials,” he said), passersby said the masonry resembled a medieval fortress. So Bishop had the idea of building a real castle.

Jim Bishop worked seven months a year at his family’s decorative ironwork store in Pueblo. With no architectural knowledge whatsoever, he built the building without any original plan or blueprints: “The project drew itself out, and the necessary details emerged in my mind. I built it with very few mistakes and a lot of testing.”

From the first stone in the foundation to the openwork wrought iron lattices, Jim did everything himself with his own hands. Only on one of the water cisterns in the far corner of the yard did he scrawl the inscription that his father only helped with that part. Bishop gave up his family’s help after a tragic accident in 1988 when his 4-year-old son, Roy, died at the lumber yard, whose ashes are buried in one of the castle towers named after him.

Today, Jim Bishop, now in his seventh decade, lives in the castle with his wife and hopes that his children and grandchildren will maintain and develop the castle as a tourist destination.

Bishop’s castle is wrapped in a network of intricate wrought iron bridges and passageways that cling to towers up to 50 meters high. A special feature of the castle is the dragon’s head protruding over a large hall, from whose open mouth flames periodically erupt and whose nostrils serve as a chimney for the fireplace. The windows of the hall are decorated with beautiful stained-glass windows.

Although the castle is nearly finished, Bishop continues to work. He plans to surround the courtyard with a moat, build a drawbridge, install slides on the outside wall of the castle and a large balcony to house the orchestra.

The castle has a bar and gift store where children are offered knight costumes, Viking helmets, swords, magic wands and dragon figurines.

History knows many examples of such dedication embodied in a beautiful structure: on the island of Trinidad (Caribbean Islands) an Indian built the beautiful Waterloo Temple with his own efforts, on the island of Maui (Hawaiian Islands) there is the beautiful Jedo-shu Temple built by a Japanese monk, in Thailand a contemporary artist dedicated his life to the construction of the Buddha’s abode on earth – the White Temple (Wat Rong Khun), in Japan a village headman founded the now most popular Sensoji Temple in Tokyo.

Bishop Castle is open daily from dawn to dusk. Admission is free, but donations are welcome. Upon entry, you will be asked to sign a guest book that exempts owners from liability for accidents on the castle grounds (insurance companies have refused to insure the outdoor construction site). Bishop’s Castle is located in south-central Colorado 21 km southeast of the intersection of highways 96 and 165, a 1.5-hour drive from Colorado Springs and less than an hour from Pueblo on a scenic mountain road. Official website: www.bishopcastle.org

READ
Konošpīte Castle, where it is and its history

Imagine a rugged stone castle set against a backdrop of mighty fir trees. Wrought iron bridges and balconies line the tall towers. A dragon’s head dangling fiercely above the main entrance, flames spewing from its mouth. This is not a setting for The Lord of the Rings, but Bishop’s Castle, an extraordinary creation created by the hands of one man. 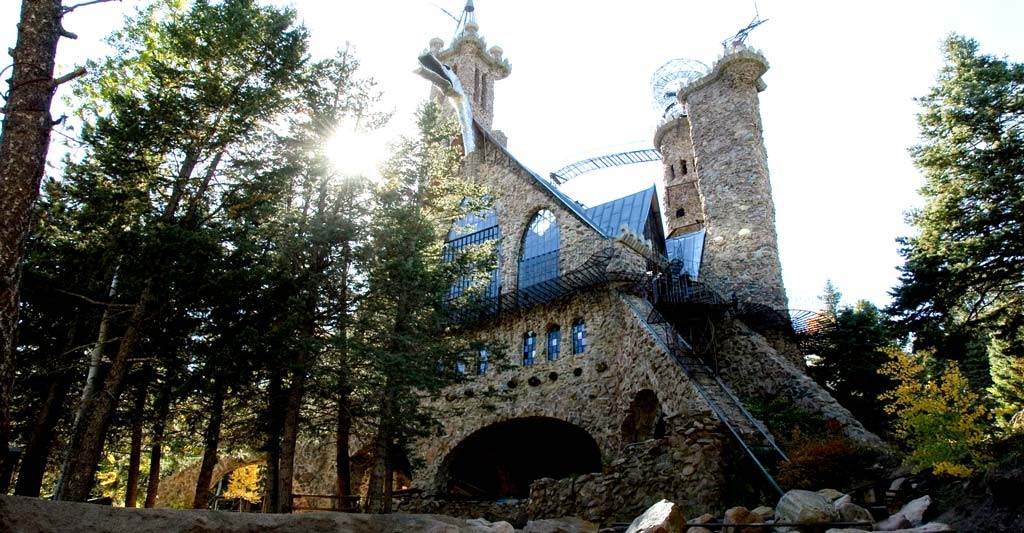 One of the most picturesque states of America – Colorado is known not only for its amazing national parks. Every year a lot of tourists come here, fascinated by such an unusual landscape of the state: on one side there are the Rocky Mountains, on the other – the famous Great Plains, the extraordinary Colorado Plateau with its famous canyons and semi-deserts. 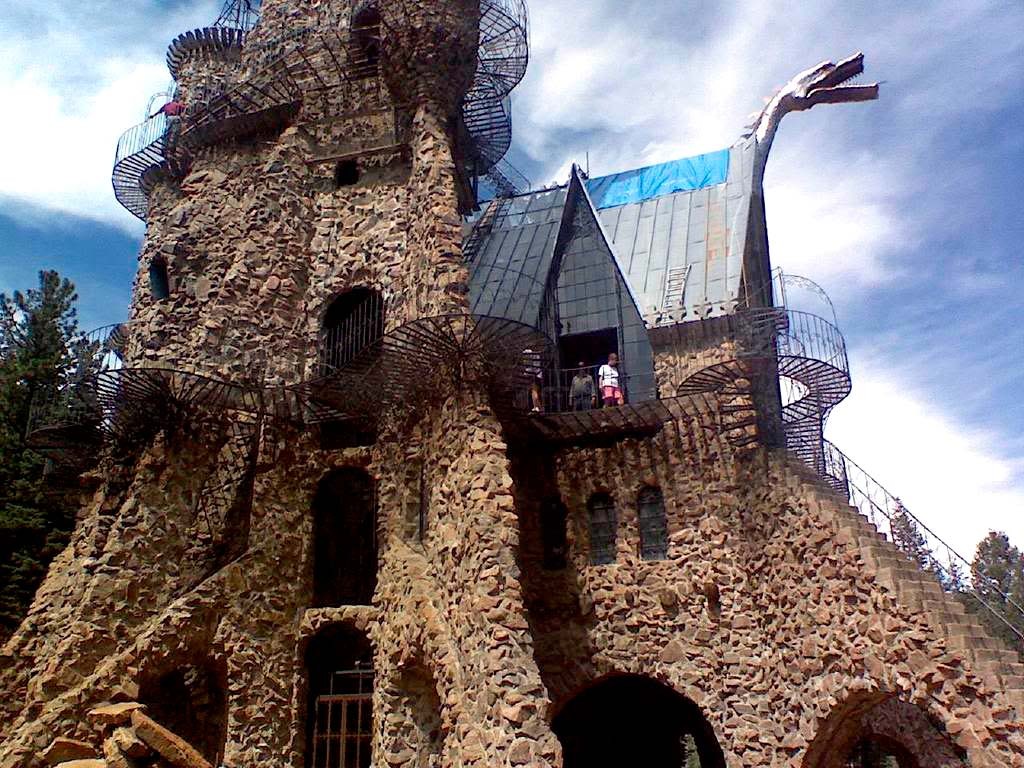 But besides all this, it is also home to one of the most famous castles on the planet. And it’s not about its inhabitants – the inhabitants of this wonderful place are not royalty. Bishop’s Castle is an amazing creation, which appeared thanks to persistence and thoroughness of its owner. Not without reason this unique architectural structure is called “a monument to hard work”.

From the history of emergence

It is known that most monuments of architecture have a long history of construction. Hundreds and thousands of people built famous structures for the nobility and to beautify their city. It is all the more incredible that Bishop’s Castle is the creation of one man. 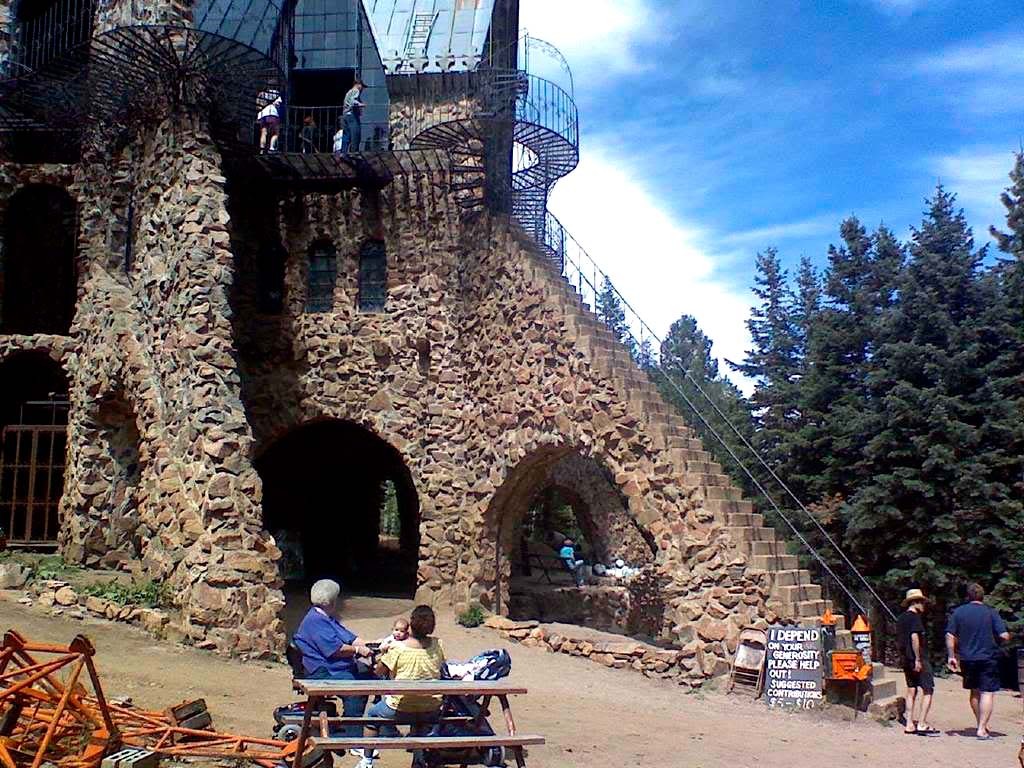 As a teenager, Jim Bishop bought a piece of land in the mountains with his last bit of money. After some time, he began to build his own house. As Bishop’s family did not have any more money, the young man began to use natural stones that he had gathered near the surrounding mountains for the foundation. Surprisingly, it was this practical decision that determined the whole appearance of the future family nest.

READ
Château of Amboise, where is it located and when was it built 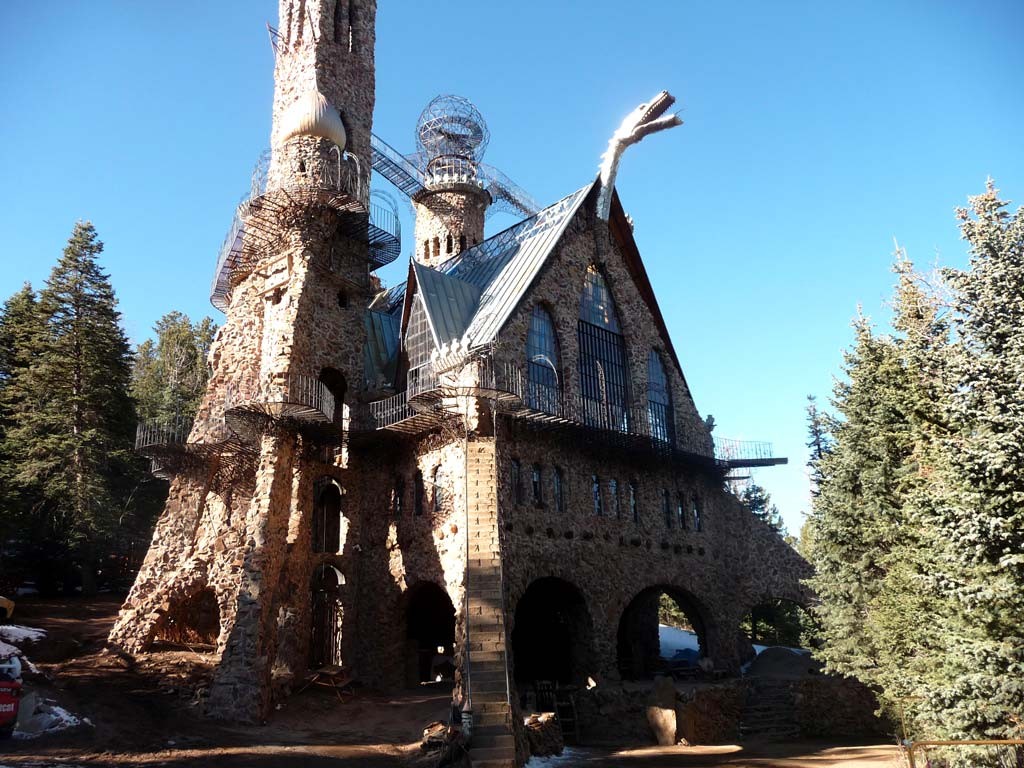 Seeing Bishop’s efforts, many people who saw the construction of the house, told the young man that his work produced not another nice house, but a strange medieval structure. Not only was the young American not upset by this, but he has since decided to actually build a real castle.

Without any special education or even any architectural knowledge, Bishop not only was not afraid of creating his own home, but began to build it without a single plan or drawing. All the forms of the future castle, the planning and design were only in the mind of the master, and then embodied in his skillful hands. Of course, such a bold decision led to a number of mistakes that slowed down and sometimes even stopped the construction, but Bishop worked hard on the blunders and eventually built a castle for himself and his family. 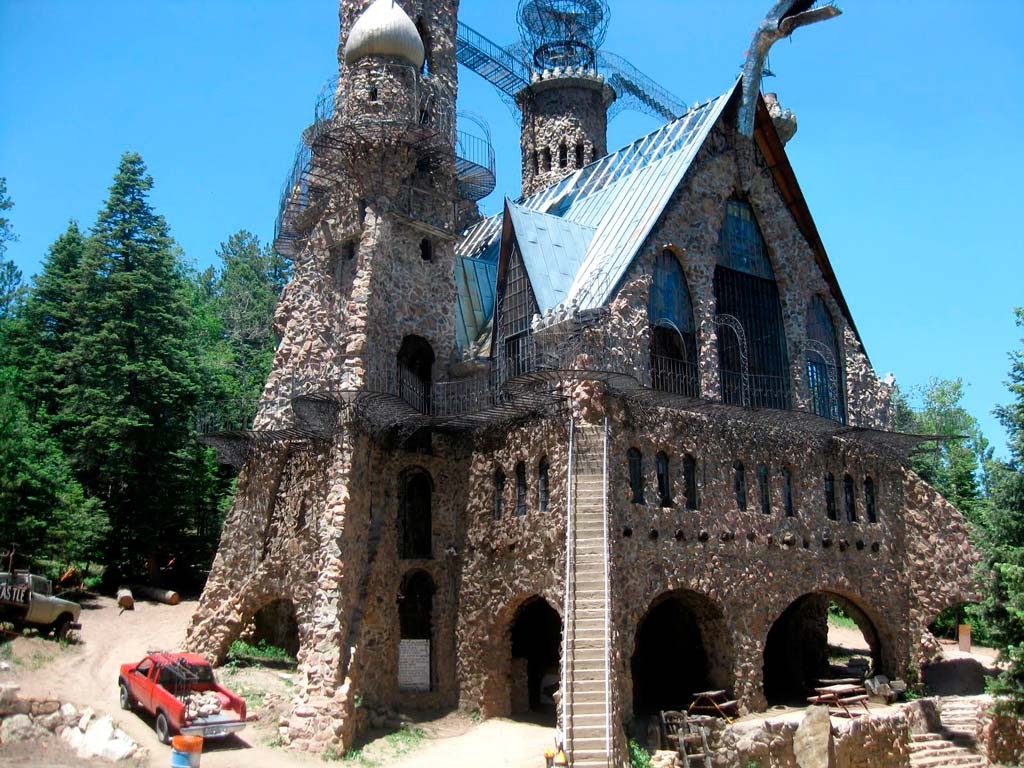 Today, Jim Bishop is a man of advanced age. However, this does not prevent him from continuing to put his plans for his dream place into practice. For example, in the near future he plans to create a moat around the castle, and to make a drawbridge for the passage. This, according to the master, will finally complete his idea.

Nevertheless, even today Bishop’s Castle is equipped with everything that is included in our idea of medieval castles. There are towers looking upward, bridges and balconies made of wrought iron and connected to each other, colored stained glass windows, a chapel and even a bell tower. The most unusual decoration of the castle is a fire-breathing dragon, which is located right above the main entrance. It is fire-breathing in the literal sense, as several times a day flames gush out of its mouth. The dragon’s nostrils serve as a special opening for the chimney, and because of that puffs of smoke are constantly blowing out. Isn’t it a fairy tale decoration? 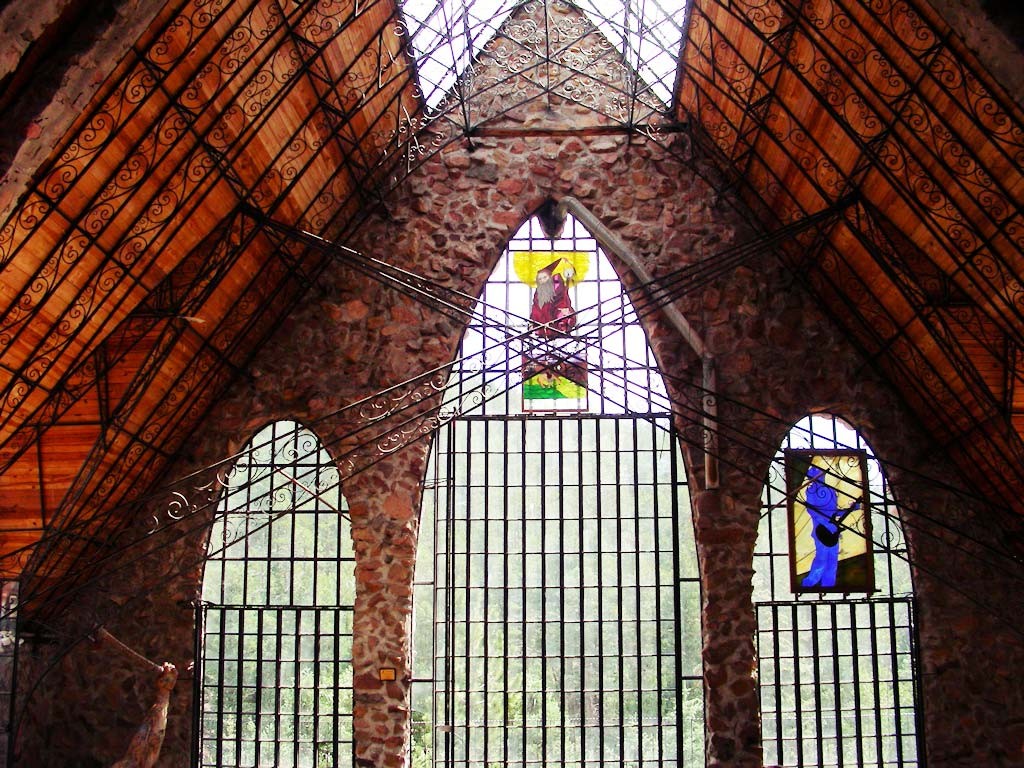 The Tower of Eternal Memory. Many do not believe that Bishop built this unique building of stone and iron alone. However, it is true. The master refused the help of his loved ones after an accident. While building the castle, his son, who had only recently turned 4 years old, died. Since then, one of the towers of the castle has been named after the boy. After that, Bishop decided he could not put his family in danger. The exception is the farthest corner of the courtyard, which was created with the help of Jim’s father. 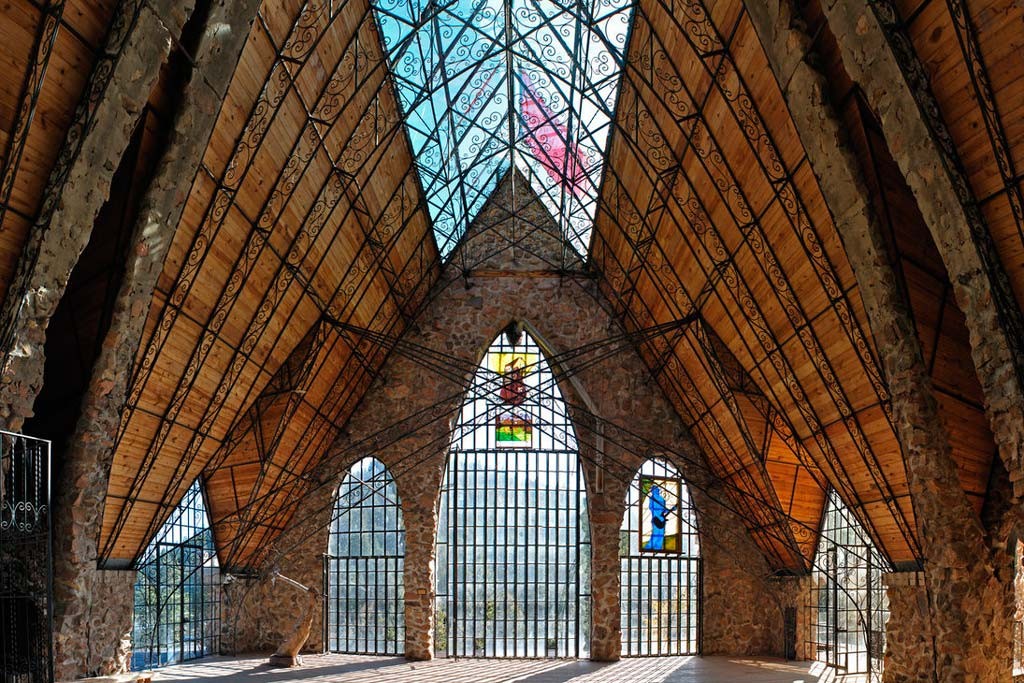 A monument to the struggling bureaucrats. Even after Bishop’s castle was erected, the local authorities grasped their heads in horror: how was it possible that instead of a small and unassuming house Bishop built such a stone giant, which attracts tourists from all over the world? And today the authorities are trying to challenge the legality of the grounds on which the wonder-builder got his plot. But Bishop pays no attention to this, and while his wife and a professional lawyer are dealing with the bureaucrats, he continues to build and fulfill his dreams. 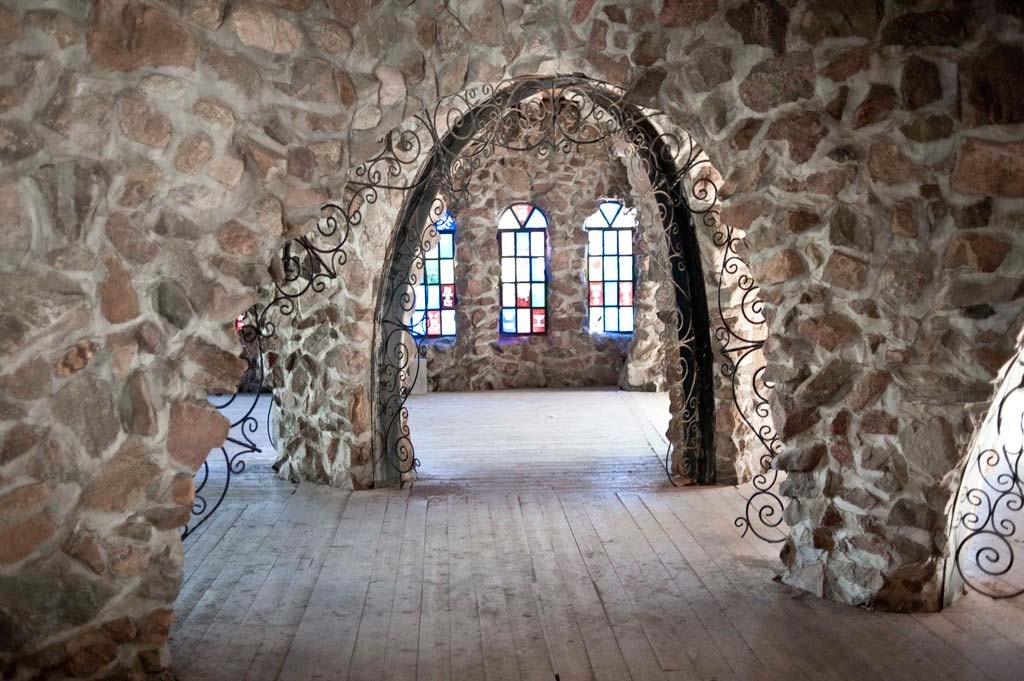 The Consent Book. Bishop enjoys inviting tourists to his house. With even more pleasure, he himself gives tours of every corner of the castle. But due to the fact that no professionals were involved in the construction, all the insurance companies amicably refused to cooperate with Bishop and those who are attracted to his family nest. That is why before entering the castle, every tourist is asked to sign a book that he has no claims in case of any accident, because Bishop’s Castle is still a construction site.

Jim Bishop was 15 years old when he decided to make his dream of building his own castle a reality.

It took Bishop more than 1,000 tons of rock to create the nest of his dreams.

2 meters – the length of the flame that shoots out of the dragon’s mouth. However, the master plans to increase the distance of the fire to 9 meters.

50 meters – the length of the tallest tower of the castle.

Free admission to Bishop’s Castle to date. That said, the creator himself provides interesting tours. In case this place makes the same impression on you, donations will be appreciated.

There is no limit for true romantics. Being on the openwork staircase made of wrought iron, or catching the reflection of the setting sun in the stained glass windows of this extraordinary structure – you will never doubt your powers again. After all, a person’s wish is just the first step toward the realization of his dreams, no matter how crazy they may be. And the Bishop’s Castle is a clear proof of it.