Alanya (Turkey) – the most detailed information about the city with photos. The main sights of Alanya with descriptions, travel guides and maps.

Alanya is a city in southwestern Turkey, a seaport and a popular resort. Located on the Mediterranean coast, 138 km from Antalya. Alanya is an ancient city, which is one of the best preserved Seljuk cities, has many ancient monuments and natural attractions. It is one of the most popular holiday destinations on the Mediterranean coast of Turkey with excellent sandy beaches and clean warm sea.

Things to do (Alanya): 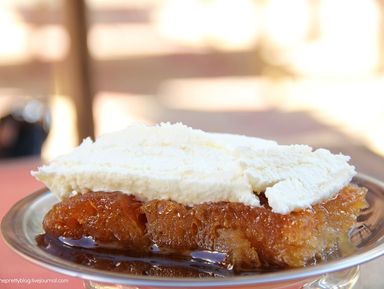 Sweet to eat and sweet to talk

Tasting and learning about oriental sweets 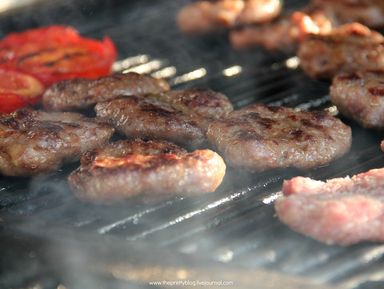 Turkish Cuisine – a delight in taste

Learn about the rich culinary traditions of different regions of Turkey through stories and dishes.

Alanya is located in the Anatolian Gulf on the Pamphylian plains between the Mediterranean Sea and the ranges of the Taurus Mountains. The city is divided by a rocky peninsula and is part of the Turkish Riviera. Alanya is located among picturesque landscapes with typical Mediterranean vegetation and craggy hills covered with coniferous and deciduous forests. 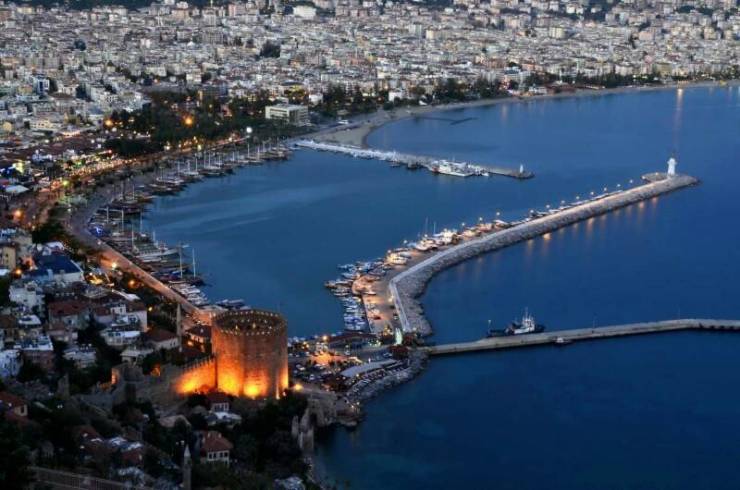 Alanya in the evening

Alanya is one of the most popular resorts in Turkey, which receives 9% of all tourists. Also 30% of all real estate, which is purchased in the country by foreigners, is located in Alanya. 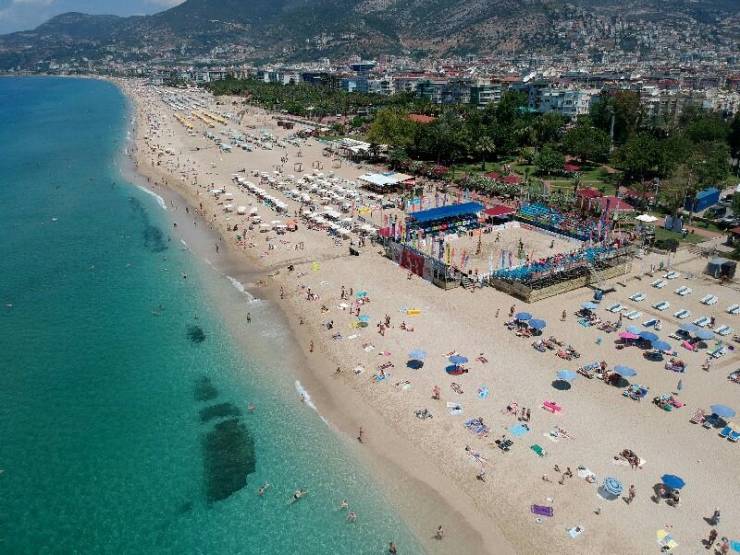 The best time to visit Alanya is from May to October. Already in late spring, the water temperature in the Mediterranean Sea reaches 21-23 ° C. In June and September the water temperature is about 25 ° C, and at the height of summer – 27-29 ° C. The hottest months are July and August. The most comfortable weather is, of course, in June and September.

Historically, Alanya is located between Cilicia and Pamphylia. The area around the city has been inhabited since the Paleolithic period. In the 4th century B.C. the Greek settlement Korakesion existed here. Later, the Cilician pirates settled here, who kept the entire Mediterranean coast in fear. The pirates were wiped out by the Roman army under the command of Gnaeus Pompey in the 1st century BC. Alanya was one of the most important cities of Antalya during the Roman period.

After the fall of the Roman Empire, the city became part of Byzantine dominion. The Byzantines named the town Kalonoros, which means “beautiful mountain. In the 13th century Alanya was conquered by the Seljuks, who called it Alaye. During this period numerous fortifications and cultural monuments were built and the city became one of the most important ports of the Mediterranean. In the 15th century Alanya became part of the Ottoman Empire. After that the importance of the city declined. The modern name Alanya got in 1933 under Ataturk.

The Medieval Walls of Alanya

The nearest airport is located two hours from Alanya in Antalya. Buses and Turkish shuttles (dolmuş) can be used to travel between cities.

Alanya is undoubtedly a shopaholic’s paradise – jewelry, leather, shoes and handbags, Turkish sweets and carpets. The main shopping areas are Cuma Bazaars, the port district and the neighborhood of Ataturk Street. In Alanya you can find a huge number of stores selling replicas of famous brands: clothes and shoes, eyeglasses and watches, handbags and purses.

Advice – in private stores be sure to haggle. Often the price of the goods is inflated by half. Also sweets are better to take by weight, pre-tasting, often beautiful large boxes do not guarantee the quality and size of the contents. 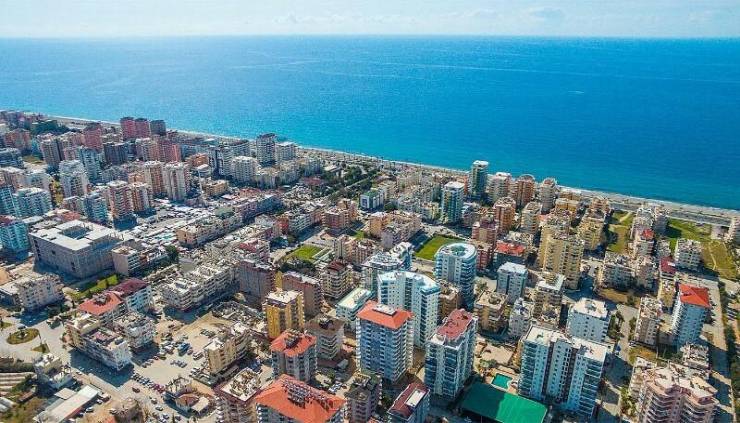 READ
ATMs in Thailand without commission

In Alanya you can try excellent Turkish cuisine, fish and seafood. Popular foods include lahmacun, şiş kebab and other varieties of kebab, baklava (Turkish sweet). Find a restaurant in Alanya to your liking and financial means is not a problem. Also the resort, which is logical, offers a bright and rich nightlife. Closer to the night start working numerous clubs and bars.

Despite the fact that Alanya was founded over two thousand years ago and the Greeks, Romans and Byzantines lived here, almost all of the most famous sights were built by the Seljuks. 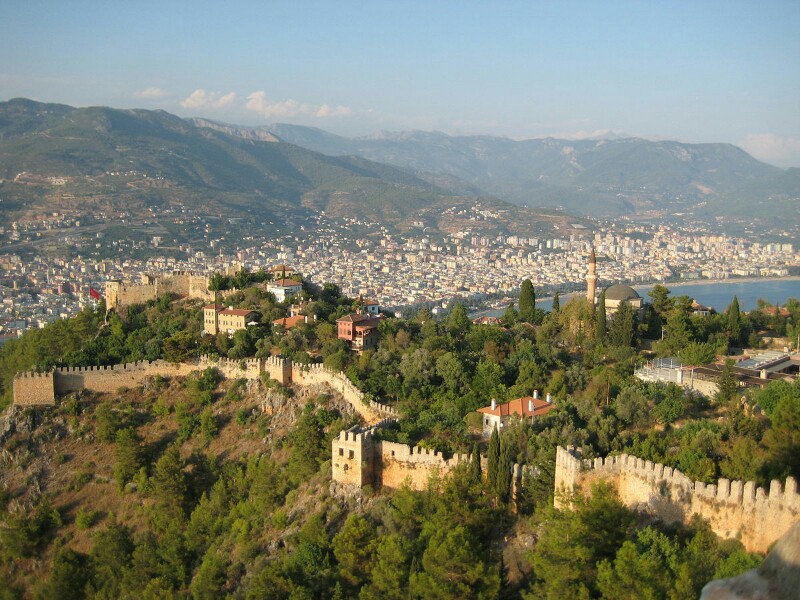 The Fortress of Alanya

The Fortress is one of the symbols of Alanya. Its medieval walls are 6.5 km long. They were equipped with 140 towers and included 400 cisterns. The eastern part of the fortress is very picturesque. Here the walls descend to the very sea up to the Red Tower. The castle of Alanya was built by the Seljuks in the 13th century, on Hellenistic foundations. There are several historical buildings in the castle: cisterns, baths and a Byzantine church. 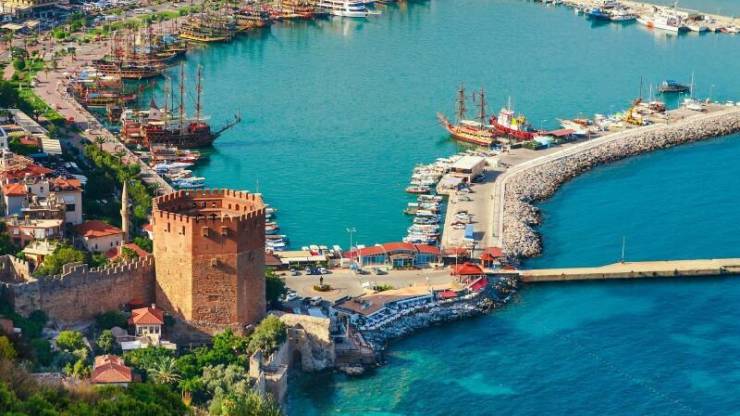 The Red Tower (Kizil Kule) is a powerful medieval octagonal structure, which is one of the most famous landmarks of Alanya. The tower is 33 meters high and was built in the 13th century with red bricks to observe the harbor. 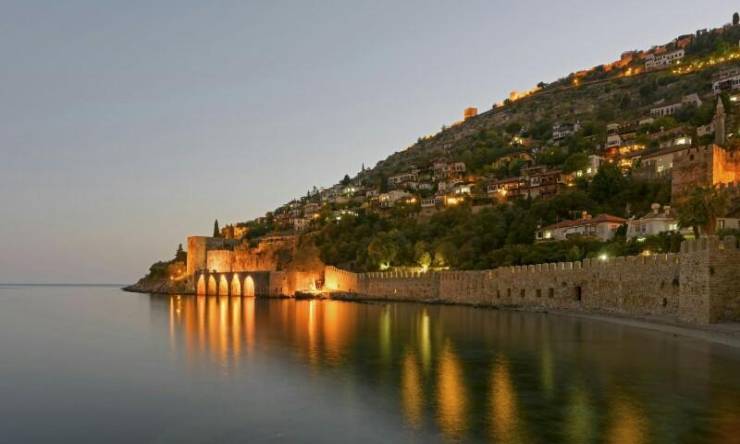 The Dockyard (Tersane) is a medieval shipbuilding structure built in the 13th century by the Seljuks. It is located to the south of the Red Tower. There are five arched galleries where ships used to be made. At the top of the rock is an armory where cannons were made. 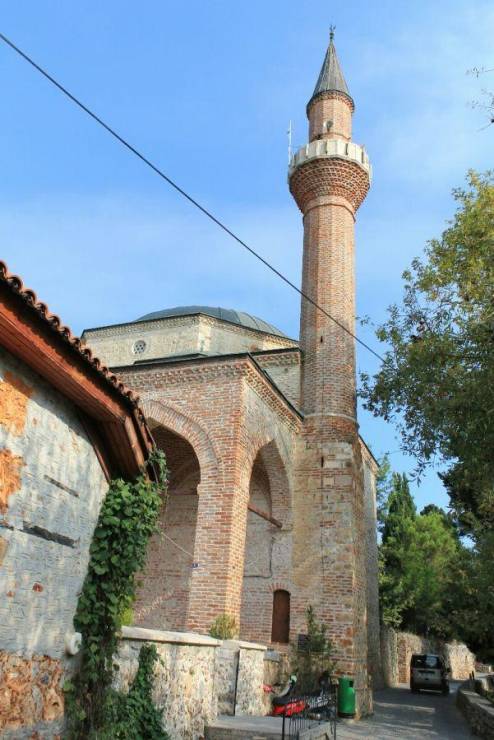 What to do in Alanya:

Interesting places in the neighborhood. 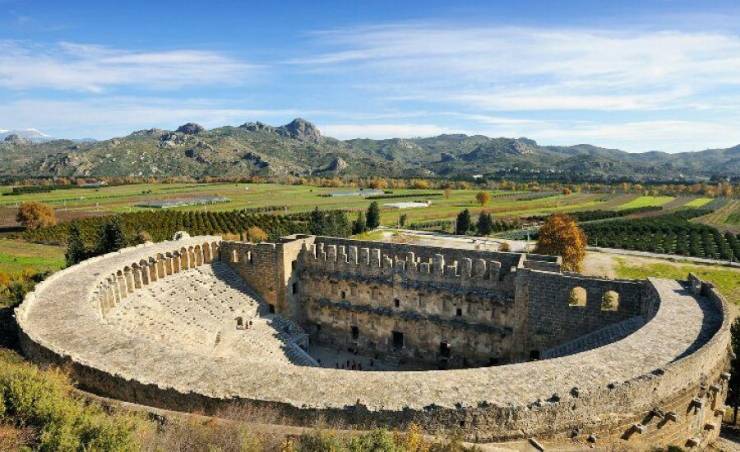 Aspendos, impressive ancient ruins of an ancient city with a magnificent Roman theater. 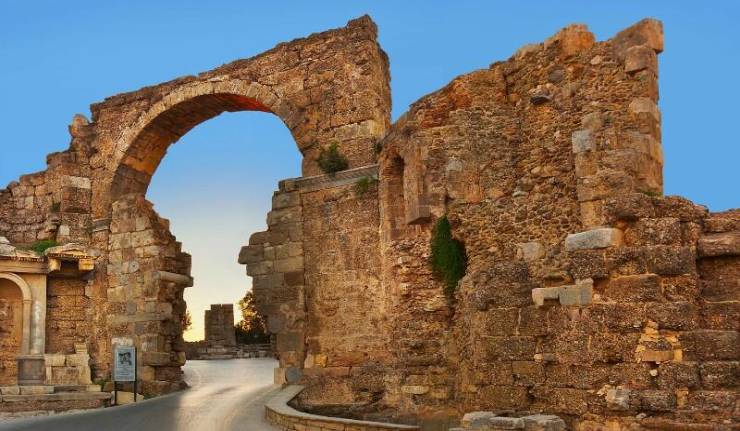 Side is the main city and port of ancient Pamphylia with a huge historical and cultural heritage in the form of Greek and Roman ruins.

READ
Fishing in Cambodia, prices and places to fish 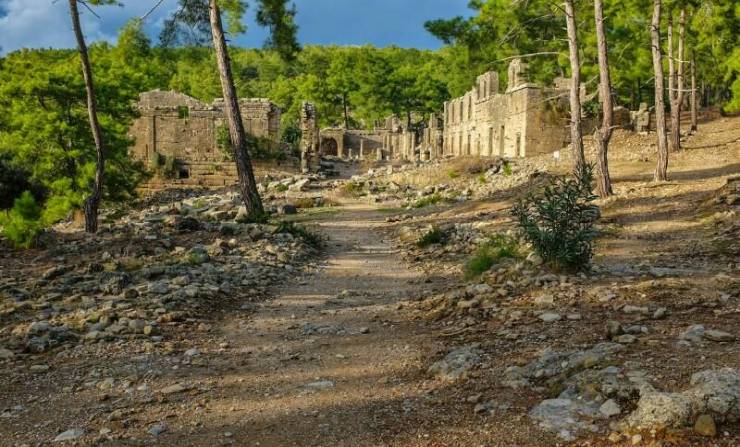 Seleucia is a romantic ruins of an ancient city set in a picturesque pine forest. 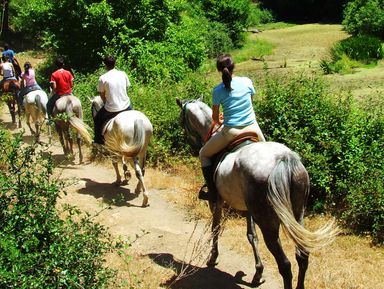 Horseback riding in a picturesque corner of Alanya 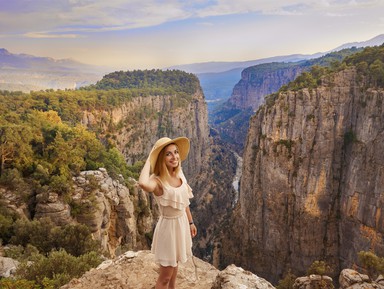 From Alanya to Tazy Canyon and the ancient Aspendos!

Admire the mountainous nature, see the ancient amphitheatre and taste the Kezleme flatbread

The Sea in Alanya Since Turkey is washed by four seas, tourists planning holidays in this country, wondering what sea in Alanya, Antalya and other popular resort towns.

Alanya is located on the Mediterranean coast. Places here are very beautiful and have a comfortable pastime. Not by chance this resort is often called one of the tourist centers of Turkey. Read more on ResortTurkey.

History of the resort The resort town of Alanya was not so long ago. Over a hundred years ago the inhabitants of these places were engaged mainly in the cultivation of banana palms and citrus trees. Farming brought them a good income, and therefore they did not even think about any other activity.

That all changed in the middle of the 19th century. During this period Alanya acquired a new status-it became a city with international heritage. It is understandable – the city has gone a long historical journey from antiquity to modern times, which was reflected in its appearance.

The event played a role in the further development of Alanya. Tourists from many countries drew attention to the proximity of the city to the Mediterranean Sea, covered with fine pebbles and sand banks, the salubrious sea air. Attracted them and unique architectural monuments – in the surrounding area of the resort there is really something to see.

Gradually Alanya became a popular holiday destination. Now tourists from all over the world come here. Many repeatedly returning to once again enjoy the wonderful atmosphere of the city and fertile sea air.

Features of the location of Alanya The curve of the Mediterranean Sea in Alanya resembles a horseshoe. Many tourists think this is a good sign: the stay here will bring happiness and good luck.

The water in the sea is clean and clear, the beaches are pebbly or sandy, many of them have a mark of the Blue Flag. In the Mediterranean Sea there are no dangerous animals like jellyfish or stingrays. Mediterranean resorts are ideal for families with children.

READ
Where can I go to rest inexpensively It in Alanya is quite long: you can come here from mid-April to the end of November. The hottest months are from June to August. During this time, the thermometer often reads +40 ° C in the shade, and the water gets up to 23-27 ° C above zero.

The beach season in Alanya lasts quite a long time: from late April to mid-November. The peak season is observed in summer, when the air and water temperatures are the highest. Many tourists prefer to go to Turkey in autumn, when the heat slowly recedes, and the water is still warm enough for swimming.

Particularly beneficial is the local air and climate for those who suffer from diseases of the heart and vessels, respiratory and nervous systems. Frequent guests of the resort are women, who need rehabilitation after pregnancy and childbirth, and children.

Where to stay in Alanya Those who come to Alanya not for the first time have their own favorite places. These include the beaches “Cleopatra”, “Kekubat”, “Portakal”, “Damtalash”. The first, for example, stretches for 2 km along the Mediterranean coast. “Cleopatra” annually becomes the holder of the Blue Flag – an international award, which since 1987 is given to the cleanest and safest beaches.

So lovers of beach holidays, dreaming to bask in the sun and giving preference to an all-inclusive system, Alanya is ideal.

With excursions in the city is a bit more complicated, because the main attractions are at a distance from the beaches. But people energetic, not used to sitting in place, this rarely stops.

READ
How to use Bangkok subway and line schematics You can have fun both on the territory of the hotel complex, and in the city itself. It is common practice for hotels in resorts such as Alanya to employ professional animators. They are responsible for organizing entertainment programs for adults and especially children.

The resort has a lot of children’s entertainment and playgrounds. In addition, the city has a water park and dolphinarium.

There are many kinds of recreation on the water in Alanya. Diving and scuba diving allow you to get acquainted with the inhabitants of the Mediterranean Sea. Parachute flights over the sea and water skiing will add adrenaline. Those who prefer peace and quiet will be interested in marine excursions on a yacht. A lot of positive emotions during these kinds of recreation is guaranteed.

Children love the rides in the water park and watching the dolphins, seals, sea lions at the local dolphinarium. Performances of unusual artists are arranged daily.

A special time for entertainment comes in the evening when the heat goes down. The most exciting of them is the foam party with fun contests and swimming in the open sea. It is held on a yacht from sunset until the morning.

It is safe to say: once you visit Alanya, you will always be a fan.