Do you like chocolates, like truffles? You open the box and a dozen or so flat, cone-shaped, tantalizing chocolates are staring at you. One by one you send them into your mouth, and here the box is already empty. And then you think – why are they so tiny and so few. If only there were hundreds of them and they were 40-50 meters high.

You think that does not happen, and you’re wrong. There’s a place on this planet where the Chocolate Hills are exactly that size, and there are hundreds of them. Yeah, I can see how your salivation has increased. Well, let me tell you, you can’t eat those hills. Or rather, you can eat them, but you won’t like them.

The Chocolate Hills are a natural geological formation that is located in the center of Bohol Island in the Philippines.

Chocolate Hills on a map

The island of Bohol is very attractive for lovers of tropical vacations. Excellent tourism infrastructure, beautiful beaches, palm trees and the gentle waters of the ocean sets up for a lazy pastime. But it’s worth saying that it’s not the only thing Bohol is famous for. Its main attraction – it’s famous Chocolate Hills. 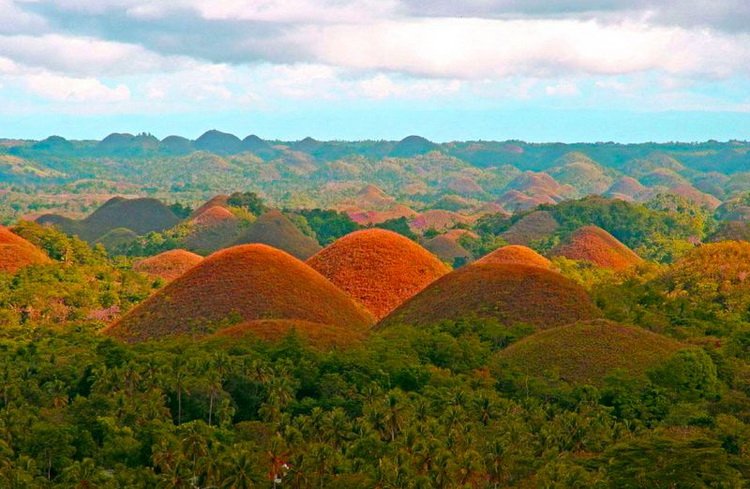 On an area of about 50 km 2 scattered a huge number of surprisingly flat cone-shaped hills. Their height varies from 30 to 121 meters. It is interesting that the exact number of hills is still unknown. They say the numbers range from 1268 to 1776.

Originally this attraction of the Philippines was called Carmen Hills (in the original Carmen hills) after the name of the area in which they are located. But once an American tourist compared these hills to the Hershey’s Kisses of the famous candy factory and called them Chocolate. And it so happened that the name stuck. Now all over the world, this place is called the Chocolate Hills.

In general, the hills are always covered with grass. Most of the time they resemble flat stacks in the countryside. 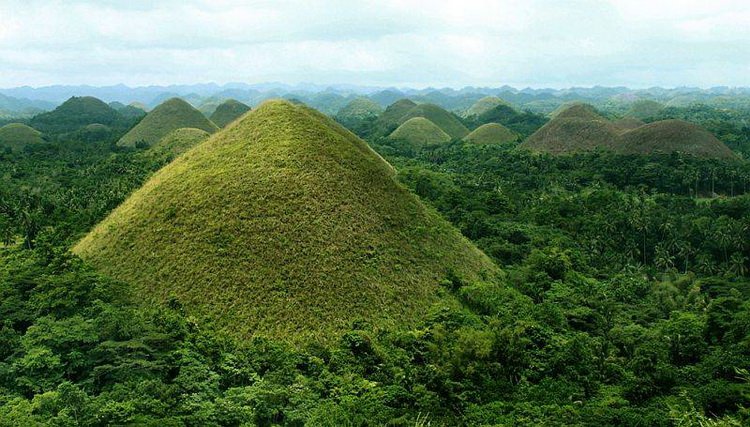 And chocolate, that is the color of milk or dark chocolate, they become only in the period from February to May, when the grass on the slopes dries up and gives the very chocolate charm of this area.

Do you like natural confections? Then read about the Bungle Bungle Hills in Australia. It’s a beautifully layered rock cake. But like the Chocolate Hills, it also can’t be eaten.

The Legends of the Chocolate Hills

The history of the origin of the hills is reliably unknown to scientists or locals. The natives associate their appearance with various ancient legends.

One legend has it that two giants lived here and feuded with each other. One day a big fight broke out between them. The giants pelted each other with huge boulders for days. When they were tired of fighting they settled their differences, made peace and left the island as friends. And the stones that they generously threw at each other remained in place, and in time they turned into magnificent hills.

Another legend tells of a giant named Arogo who lived in these parts. He fell in love with a beautiful but ordinary girl named Aloya. The giants lived much longer than ordinary people, and so Arogo outlived his beloved. After her death, he grieved and wept very much. And his tears turned into the very Chocolate Hills.

Scientists, too, have not come to a common opinion, but put forward more plausible scientific hypotheses.

According to one version, the hills were formed as a result of erosion and weathering of the raised coral strata. The second hypothesis suggests that the hills arose as a result of volcanic activity in ancient times.

Another version says that for a long time, this part of the land was under the water and the hills were formed by limestone deposits. But then the sea receded, the hills were on dry land, and the wind and rain had already carved such interesting landscapes. 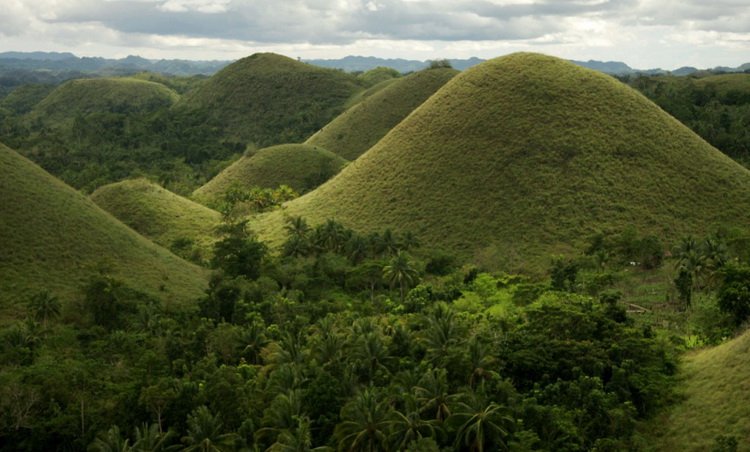 The version of the creation of the Chocolate Hills by man is rejected in view of the fact that, firstly, it is not clear why and who could have needed it. Secondly, an incredible amount of resources, both human and material, would be needed to build such a large number of rather high hills.

Chocolate Hills in the Philippines

The Chocolate Hills on Bohol Island (Bohol) are a unique natural formation, which is listed as a UNESCO World Heritage Site. They are the main attraction of the province. Even Bohol’s flag and coat of arms feature the image of the hills.

When you hear the name “Chocolate Hills”, you imagine that perhaps they are hills covered with cocoa trees. In fact, they got their sweet name because of the property of the grass that grows on them. The grass dries out and changes its color to brown – this explains the name. The hills look especially beautiful surrounded by green forests. 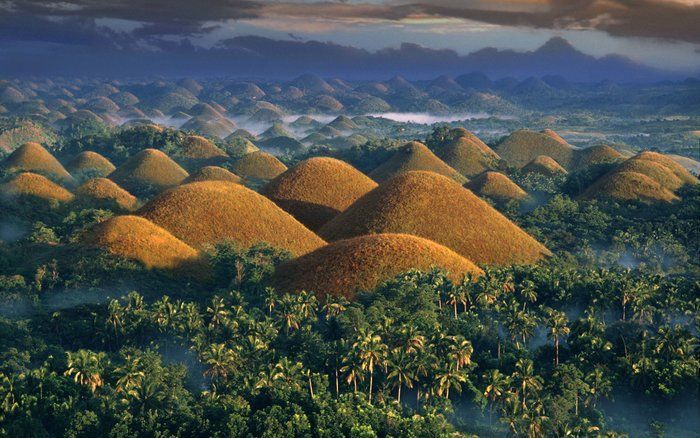 This extraordinarily beautiful natural spectacle has many legends and scientific hypotheses that are trying hard to understand the origin of such a natural wonder, but to this day there is no general consensus on the matter.

Chocolate hills have a regular cone shape, and each of the 1268 units, they differ only in height. The level of elevation ranges from 30 m to 100 m. In the fall and winter the hills are green, closer to spring they begin to darken. 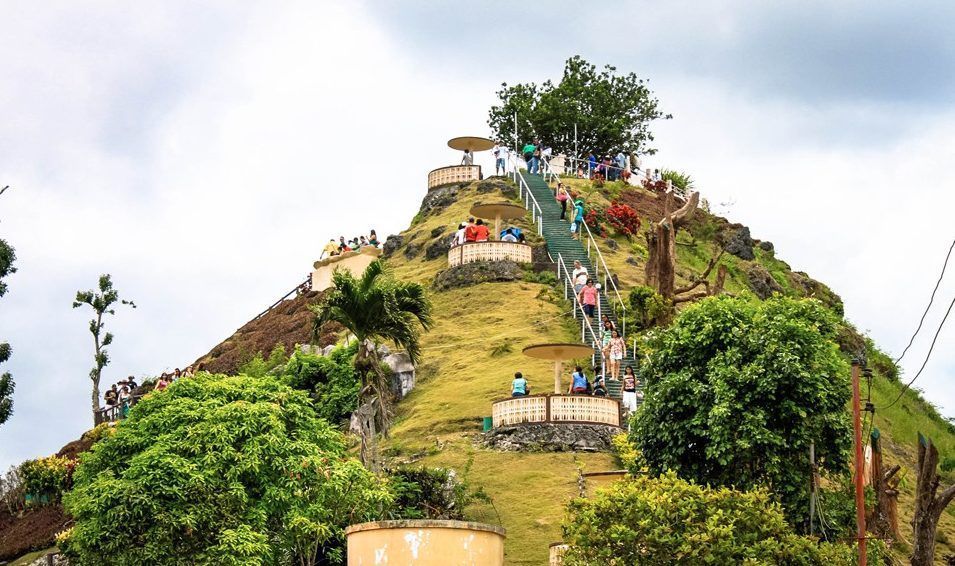 On the soil between the hills, the locals grow rice. Two of the hills have been equipped for tourists. At Sagbayan Peak there is an observation deck from which you can admire the chocolate hills. There is also a mountain health center. On the way to the observation deck, there are amazing views of the green rice fields below.

At the observation deck is a bell, which to strike is considered good luck. On the main hill, with the platform, there is a cafe, restaurant and hotel, for those who decide to linger in these places. There is a fee to enter the site, 50 pesos.

Not far from the town of Carmen is the Chocolate Hills complex with hotels.

Video about the Chocolate Hills:

Hypotheses and legends of origin:

Strange as it may seem, each of the versions has the right to be, but so far none of them acts as a reliable and affirmative option. But what scientists know for sure is that the hills are not man-made.

But local residents contrary to all scientists put forward their legends, which attract tourists to such mysterious natural beauty and give some mysticism.

According to the first legend, the hills were formed as a result of a fight between two giants who had been fighting for some time, pelting each other with rocks and sand, but eventually reconciled and dispersed. And the Chocolate Hills are their battlefield, which over the years has transformed and become fascinating.

The second legend is steeped in romance and the hardships of the love that the giant Arogo felt for an ordinary mortal girl named Aloya. But, unfortunately, he never got to know the reciprocal sincere feelings, in addition Aloya dies. And he, touched by this news, cannot hold back his tears, which are transformed into hills. 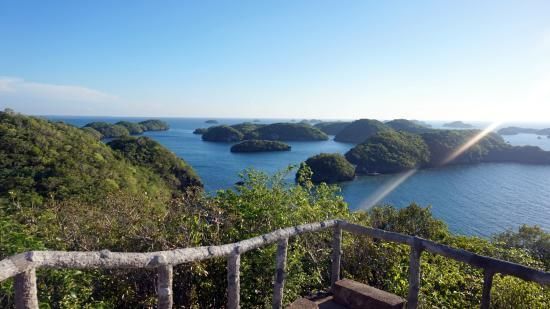 The best option is to get to the hills as part of your tour if your trip is organized by an agency.

However, you can also do it yourself. After arriving in Manila from Moscow, you can go to Bohol by local plane. Flights are operated by Cebu Pacific and Air Asia. The flight time is about an hour and a half. The ticket price is $85.

READ
The Churaumi Oceanarium, home to the largest fish in the world

Ferries run from Cebu Island and bring you to the island in about half an hour. The ticket price is $16 to $20. You can also fly in an airplane for $35. 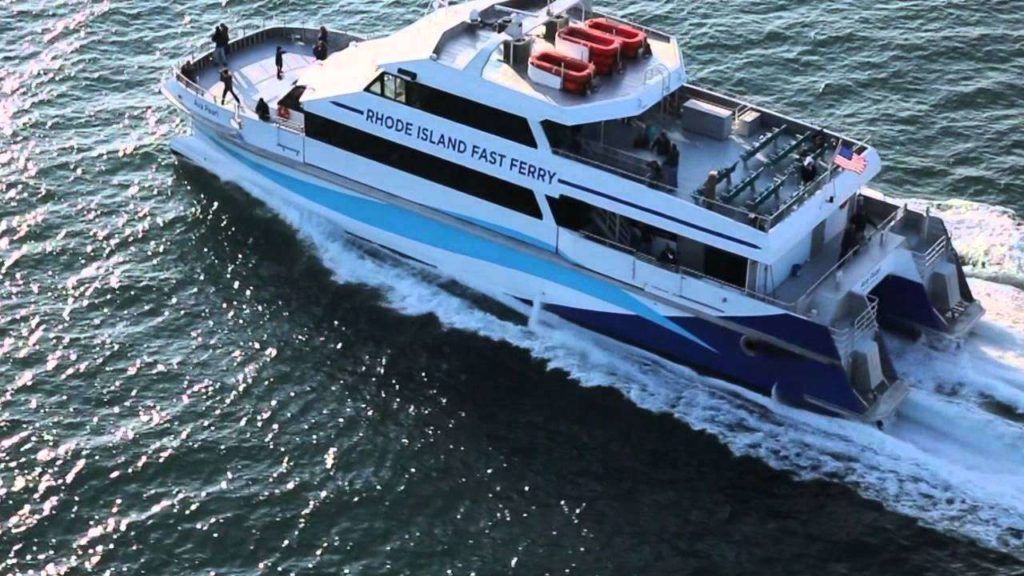 The administrative center of Bohol is Tagbilaran. From the bus station you can take a bus to Carmen. The chocolate hills are located before you reach the town. At the signpost to the hills you need to ask the driver to stop. Travel time is about 1.5 hours and the ticket costs 56 pesos. Buses leave for the hills every 20 minutes.

The Chocolate Hills are located on Bohol Island near the towns of Batuan, Sagbayan, and Carmen.

This area is known not only for the Chocolate Hills, but also the habitat of the smallest monkeys on earth.

Compared with the island of Cebu Bohol infrastructure is not as well developed. However, there are options for accommodation. In addition to the complexes directly on and near the hills, you can stay in a hotel in Cebu or in Tagbilaran.

There are many hotels on neighboring Pangalao, where you can also find lodging. There are great beaches and diving spots. The local Alona Beach is popular. 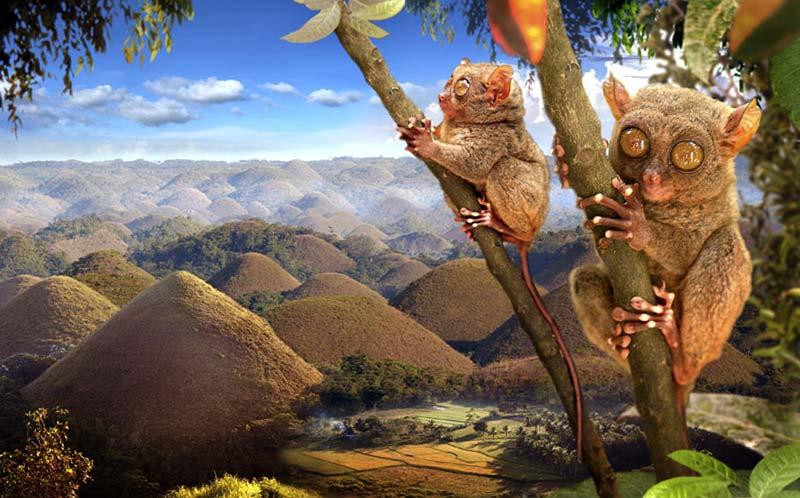 Therefore, for those who want to see the Chocolate Hills, it will not be difficult to get to this unique place. Chocolate Hills has charmed no tourist, it is a sight that will be imprinted in the memory for a lifetime.