Morne Trois Pitons National Park of the island nation of Dominica (not to be confused with the Dominican Republic), in the Caribbean, is an area of increased volcanic activity. The area of the park is about 7,000 hectares. Five of the island’s nine volcanoes, dozens of hot springs and fumaroles, and the famous Boiling Lake are located here. As you understood, the lake got its name because of its boiling water.

There is no exotic name for this lake. It is simply called Boiling Lake.

Where is Boiling Lake

Boiling Lake is located in southern Dominica on the slope of the volcano Morn Watt (1224 meters high) 10.5 kilometers east of the town of Roseau. The lake itself is located in a lush rainforest at an altitude of about 780 to 800 meters above sea level. 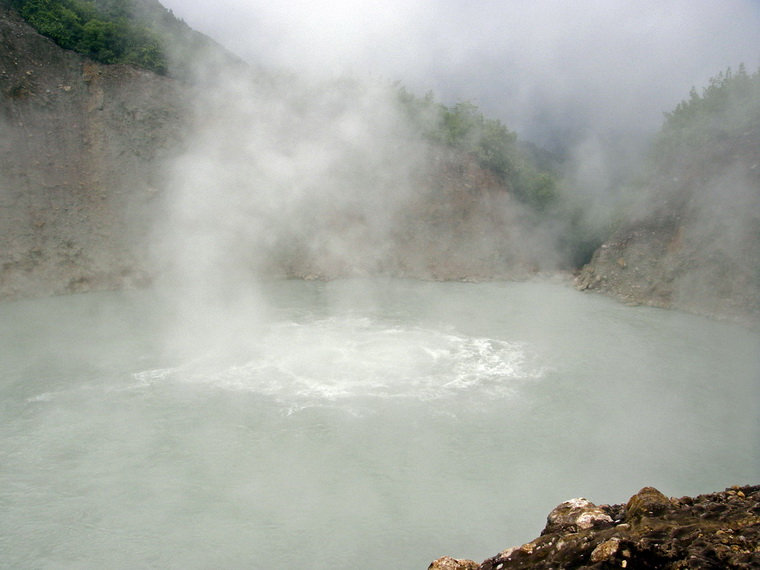 The lake is a submerged volcanic fumarole.

A fumarole is a crack or opening in the earth’s crust that can connect to underground magmatic masses.

The fumarole is filled with bubbling grayish-blue water, which has a temperature of about 90oC. The water is heated by hot steam and gases from the red-hot lava below. Steam clouds usually hang over the surface of the lake. 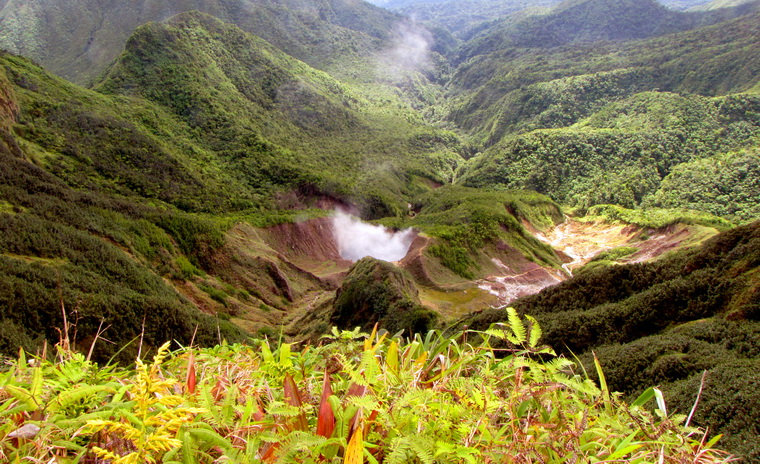 Steam clouds over the Boiling Lake

Boiling Lake is almost circular in shape with a diameter of about 70 meters, making it the second-largest hot lake on the planet after Frying Pan Lake in the Weymang Valley of New Zealand’s North Island. 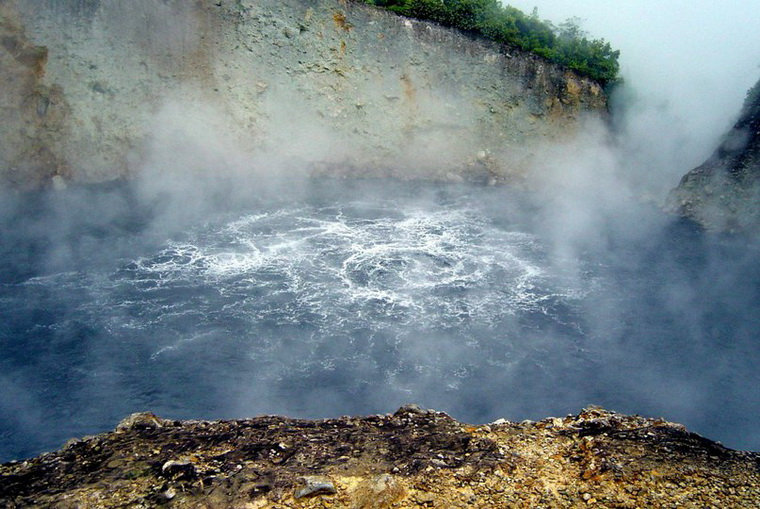 The lake was first discovered in 1870 by two Englishmen, Edmund Watt and Henry Alfred Nichols, who were working in Dominica at the time. In 1875, Henry Presto, a government botanist, and Henry Nichols were commissioned to investigate this remarkable natural phenomenon. The study found that the water temperature was in the 82-92oC range. Moreover, it was along the edges of the lake. It was not possible to get data on the temperature in the center because of the great danger.

READ
Mauna Kea is the highest mountain on the planet. Hawaii 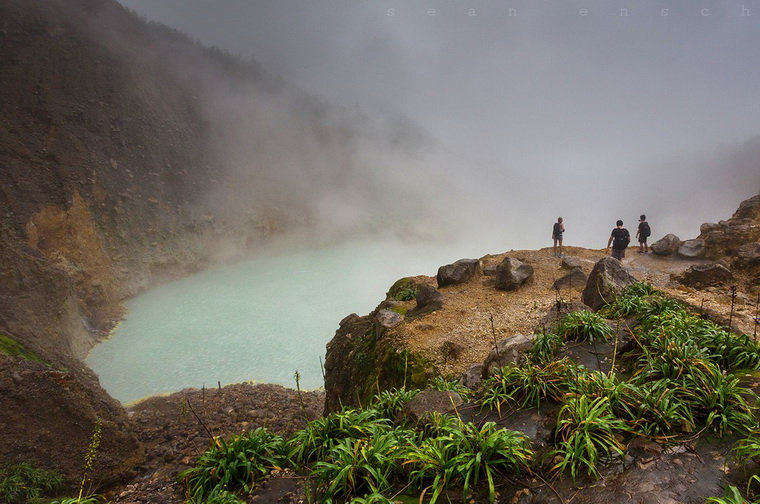 Why is the lake boiling?

As we said, this lake is a fumarole filled with water. The lake is fed by precipitation and two small streams. The water seeps to the lava in the upper layers of the earth’s crust and heats up to boiling point.

The lake’s water level and activity changes periodically. The depth and diameter of the reservoir depends directly on volcanic activity and the amount of precipitation in the region. Typically, the lake is 60 to 76 meters across. Once Boiling Lake almost disappeared after it erupted in 1880 and created a fountain of hot water and steam. Then it gradually recovered.

From recent history we know that at the end of 2004, as a result of a small eruption, the water level in Boiling Lake dropped rapidly by as much as 10 meters. This level held from December 2004 to April 2005. Later the level of the lake rose again and recovered in just one day. 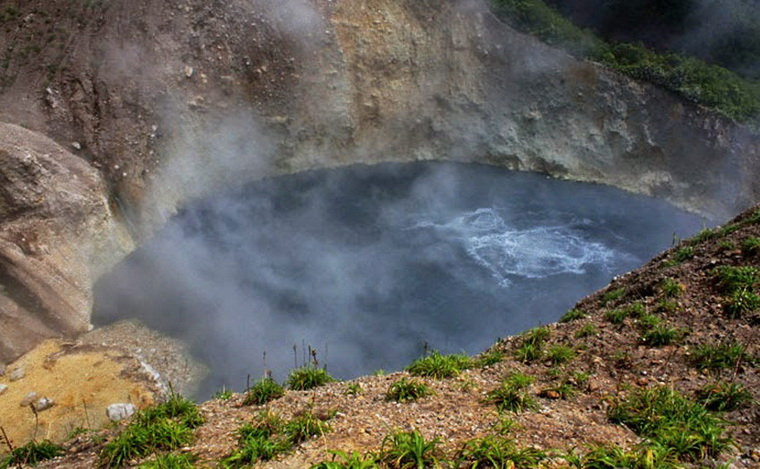 The boiling lake in tourism

Today, the Boiling Lake is a well-known but difficult-to-reach attraction in Dominica. There is no direct road leading directly to the lake. Tourists usually have to overcome a 13-kilometer climb towards it from the nearest road. The hike is conventionally divided into three sections, 1 hour each. The first section starts in Laudate, Titou Gorge, and ends at a small river where hikers can refill their fresh water supply. The second continues to the 965-meter-high Morne Nicholls Mountain and ends at the top of the Valley of Desolation. The third section begins with a perilous descent into the Valley of Desolation, followed by a long hike through sulfur springs and hot pools to Boiling Lake. 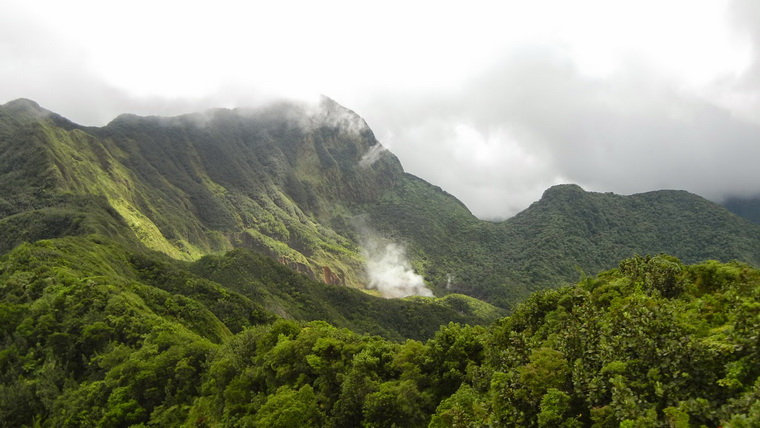 The vicinity of Boiling Lake.

What do you know about the warmest lake on the planet that you can boil alive in! 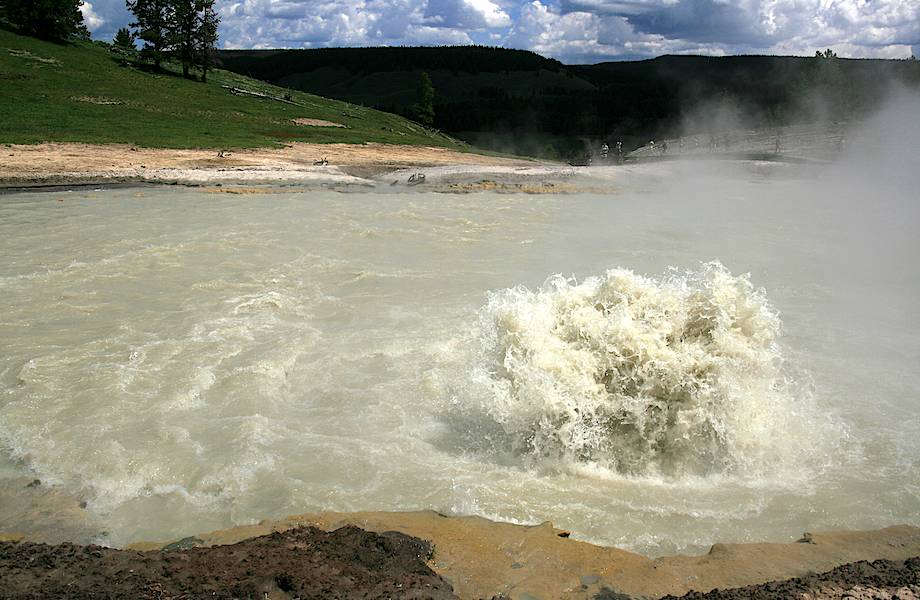 Today TravelAsk will tell you about the warmest lake in the world. However, we hasten to disappoint all those who want to enjoy the warm water: you can not swim in this body of water. Unless you want to be boiled alive.)

The name of the lake speaks for itself – Boiling Lake. It is a UNESCO World Heritage Site and indeed a natural wonder. 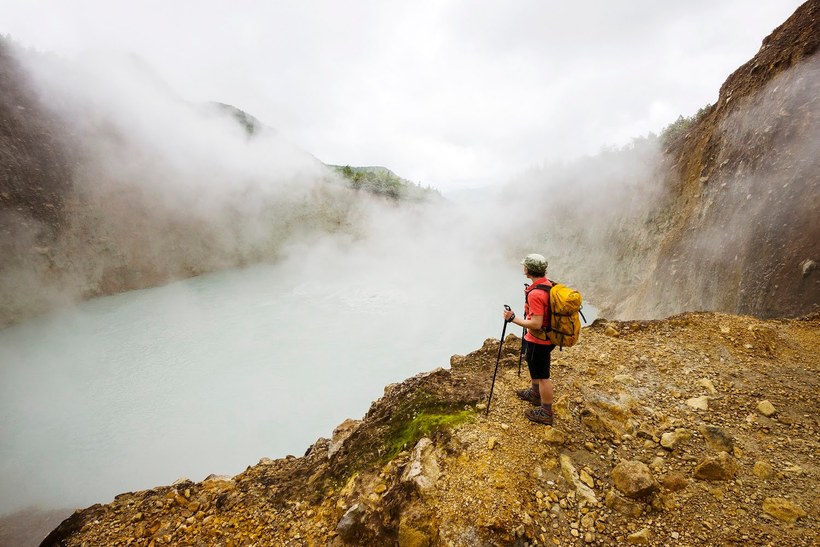 It is located in Dominica, a state located on the volcanic island of the same name in the Caribbean Sea. At the moment volcanic activity is not observed here, but its echoes are just such interesting bodies of water: geysers and lakes with hot water, as well as coasts with volcanic black and yellow sand.

The country, by the way, should not be confused with the Dominican Republic. Otherwise, the rest may not be what you expect) Although these two states are not far from each other.

The main attraction of the country

In fact, tourism in Dominica is underdeveloped, but the island’s main attraction, the Morne-Troix-Python National Park, is visited by all travelers. In addition to mountains, waterfalls and rainforest caves, there is the warmest, even the hottest lake in the world. The water in Boiling Lake during some periods reaches 92 degrees, but during the rainy season the temperature can drop to 10 degrees. Swimming, which is quite natural, in the lake is not allowed, as under the water can be hot springs and lava, even in the cold season. 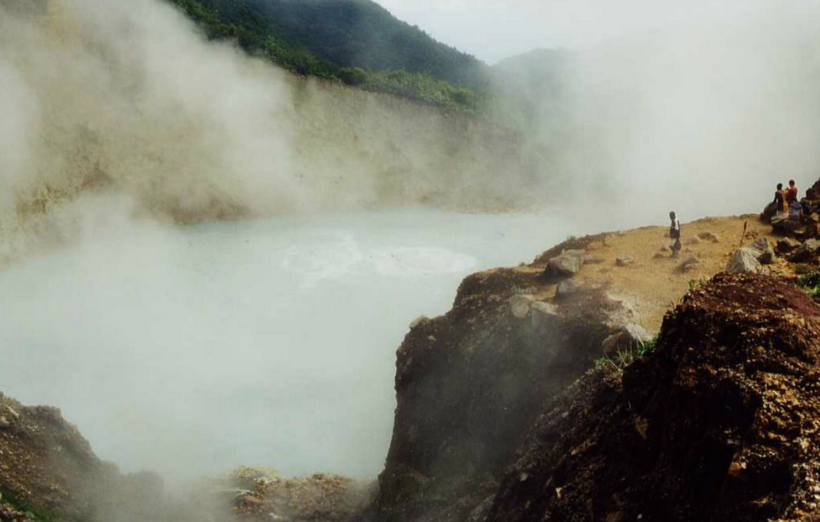 Do not go to the lake on your own, it is better to take a guide. Located on the lake from the capital of Dominica Roso not far – about 11 kilometers. There are mountains around the lake, so the ascent is quite difficult and can take all day. On the way to Boiling Lake you can see sulfur streams and the river, as well as columns of hot air and steam rising from the ground.

READ
Where are the Canary Islands, weather by month

By the way, the sulfur stream forms several natural pools, where you can swim and cheer up. Tourists also go through the so-called Valley of Desolation. It is located just on the approach to the reservoir, here is a hot air, saturated with vapor and a pungent smell of sulfur. Also here geysers are beating and hissing, so the view is rather ominous, just passing the circles of hell).

The envy of monarchs

The lake was formed in a fumarole. This is the name given to the fissure in or near the crater of the volcano. The lake is fed by the streams that flow through it, as well as by precipitation. There is lava at the bottom of the crack, and it makes the lake boil like a pot. 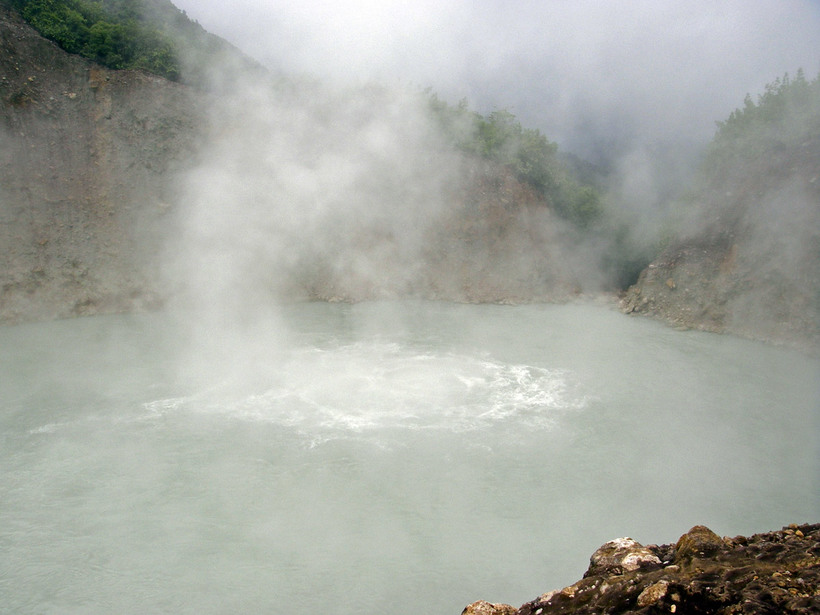 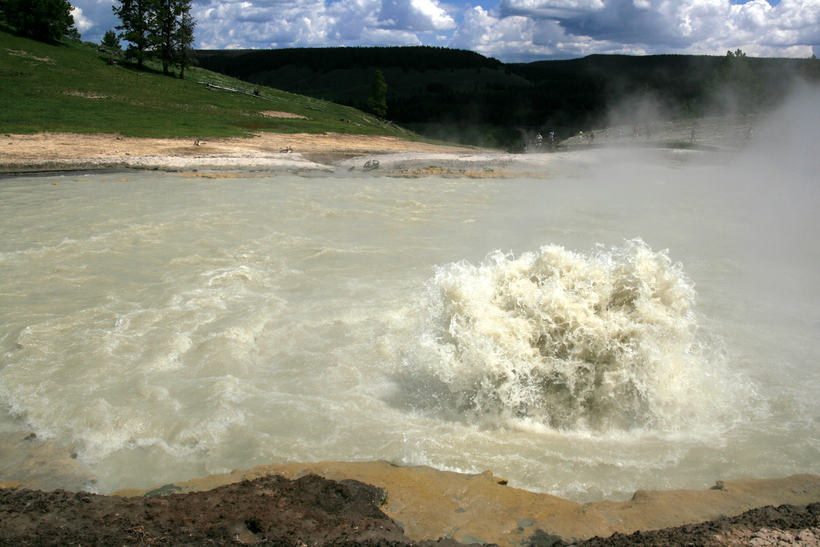 Surely the former kings of Europe dreamed of such a lake)). They had very popular executions, when the perpetrator of a crime was boiled in water.

For the first time the temperature of the lake near the shores was measured in the XIX century by the British, it reached a mark of 82-92 ° C. They did not manage to reach the center, where the water was boiling.

On the lake, by the way, filmed an episode of the popular Canadian TV series “Rugged Planet” (in the original Angry Planet). Director and extreme climber George Kourounis, suspended on ropes, crossed the lake from above at the hottest point. He was the first person to accomplish such a feat.

There is another “hero” of our today’s article, and he is, by the way, in one of the most picturesque places on our planet – New Zealand. The lake is called Frying Pan, which means “frying pan”. 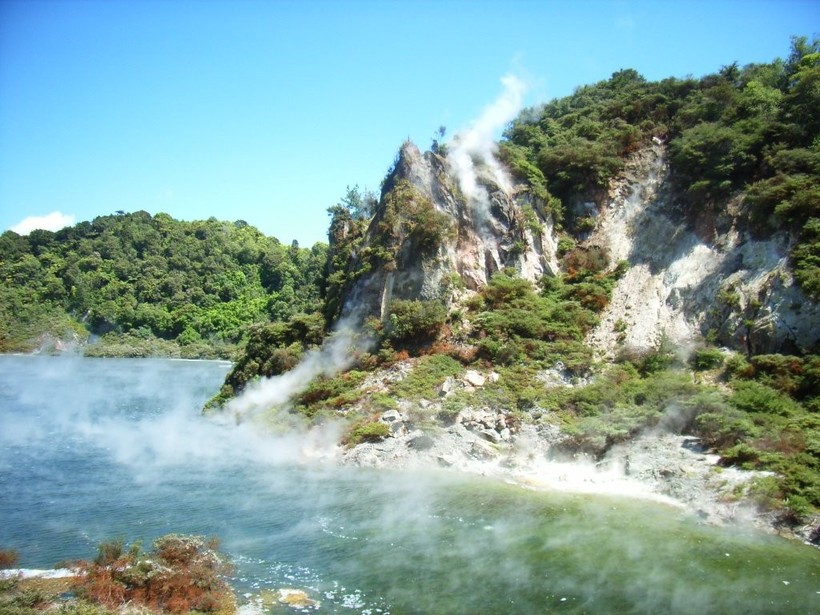 It is the largest hot lake in the world, Boiling Lake takes second place.

There is a cloud of steam hanging over this water body too, but unlike Boiling Lake, it is there all year round, and the water temperature is about the same all the time – about 55 degrees.

Frying pan appeared recently, in 1917 in the crater of the volcano Tarawera, which after the eruption filled with water. The average depth of the lake is 6 meters, and the area is 38 thousand square meters.

Frying Pan, too, seems to be boiling: the water is bubbling and bubbling. This is due to the hydrosulfate gases contained in the reservoir, which cause such a reaction. 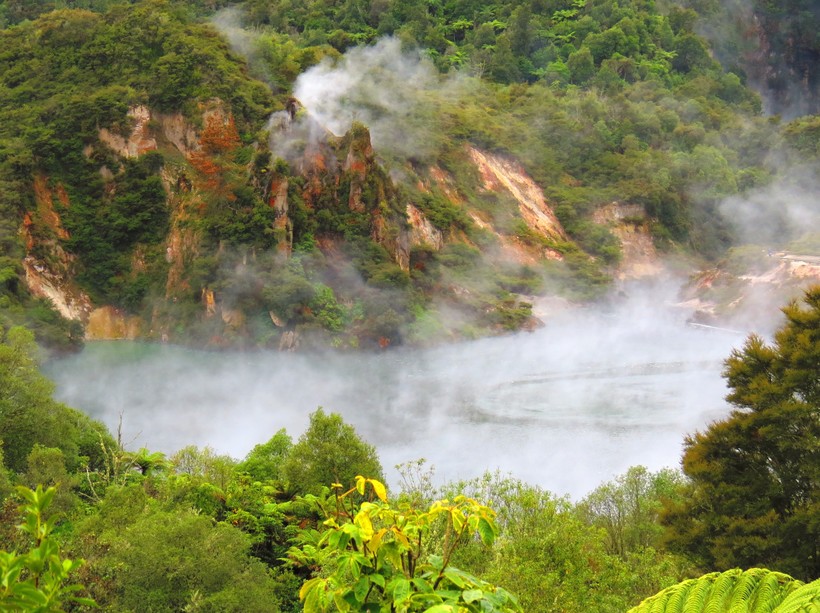 In general, the water in the lake has an average pH of 3.8, but some of the boiling hot springs at its bottom reach a pH of 8.2 to 8.7. It is quite understandable that it is dangerous to swim in such a body of water. 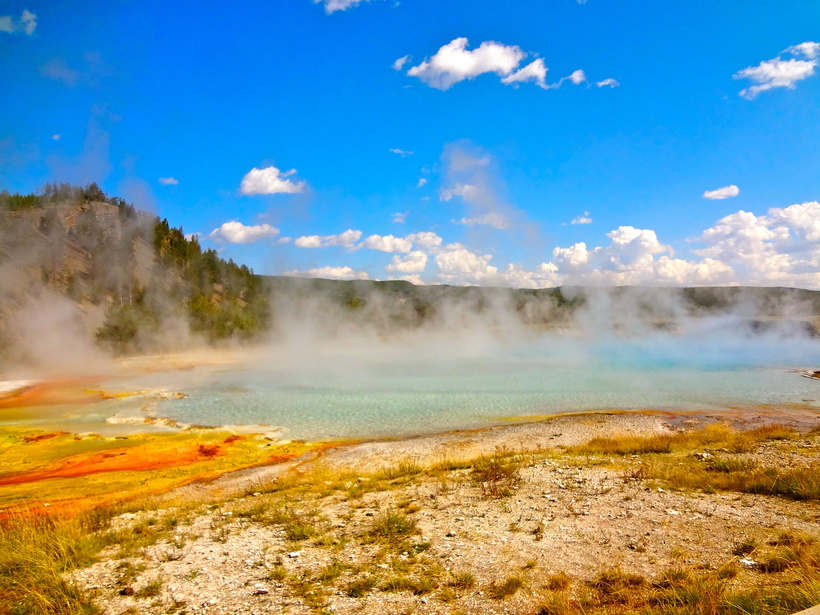 Near the lake there is a depression where streams of water flow out. Along them, chemical deposits (arsenic, antimony, tungsten and molybdenum) accumulate, which combine with algae to give a variety of colors near the shores.