Bojnický Castle, located in Slovakia, was rebuilt several times and acquired its present form in the 19th century.

It has been rightfully included in the list of Slovakia’s national cultural monuments. The castle museum is famous for its interesting exhibits, and the guided tours and festivals are excellently organized and realistic. Fairy tale movies, filmed in the castle, are popular with audiences.

The first mentions of Bojnice Castle are to be found in the documents of the abbey, dating back to the 12th century. It was a wooden fortress, which was rebuilt into a stone one as the danger to its inhabitants increased. The King of Hungary granted it to Matusz Čák, who at that time had great influence in the territory of western and central Slovakia.

In the 15th century the fortress came into the possession of King Matyáš Corvinus. Matyáš I was descended from a noble family of Transylvanian magnates. He owed his nickname (the Raven) to the bird depicted on the family coat of arms. He was proclaimed the new monarch of Hungary in the middle of the 15th century. He is known for capturing Vienna during the conflict with Friedrich III.

Matyáš Korvin succeeded in carrying out important reforms for society and restoring Hungarian statehood. He was also a patron of talented artists and architects, and thus can be rightly called one of the first monarchs of Renaissance Europe.

After the king’s death, the castle passed to the famous Zapoliai family. Members of the Turzo family added Renaissance features to the architectural ensemble of the building. From the 17th to the beginning of the 20th century, the fortress was in the hands of the Palfi family. Thanks to one of them, Jan Palfi, we can notice a certain resemblance of the castle to the French castles of the Loire. After the end of World War II, it was nationalized.

The landmark was badly damaged by a fire in 1950.

After the restoration works some part of the Slovak National Museum collection was moved there. After reconstruction works, some displays showing the development of the post-modernist architectural style were moved there.

Nowadays the Bojnice Chateau attracts visitors from all over the world not only as a historical monument. Within the walls of the intimate chapel, which is part of the chateau complex, couples in love get married. It was designed by an Italian architect in the early Baroque style.

Scenes involving noble ladies and brave knights come to life here several times a year, and ominous ghosts tell of their miserable fate. No, scientists have not yet invented a time machine, this ancient fortress thanks to its favorable location and rich natural landscapes has become an excellent place for various themed festivals.

The castle also has a hospital for birds, where rare species of eagles and owls are kept, and a zoo – children will not be bored, while the adults explore the castle and listen to stories about the events that once happened here.

There are various stories and legends about the castle associated with its owners. From them we can not only learn what the building looked like many centuries ago, what were the traditions of aristocratic families, but also relive the dramatic stories of the people who once lived here.

A talented craftsman can create a masterpiece that will be admired by many, but what can an architect and collector in love do? As it turned out, a lot – it is a joke to carry out the idea of transforming your own fortress into a castle, similar to the house of a capricious bride. Jan Palfi dared to do it, having personally developed the architectural project and design of the structure, because his beloved flatly refused to move from France to the land of the aristocrat.

Palfi did not want to leave the ancestral home, so he rebuilt the castle more than 20 years, with the hope that the lady of the heart will still accept his proposal. But while the groom was engrossed in large-scale works, she, not wanting to wait so long, married someone else. Palfi never found marital happiness, but we can admire the fruit of his grandiose labors through the ages.

The courtyard of Bojnice Chateau has a garden with a famous linden tree, a natural monument of Slovakia. It is said to have been planted by Matúš Čák, the first owner of the castle.

In the 15th century the ruler Matyáš Corvinus Hunyadi liked to spend time in its shade dictating his decrees, so the tree is called the Royal Tree.

Bojnice Castle has been reconstructed several times. Each reconstruction complemented the previous architecture. As a result, the castle has absorbed the best features of many architectural styles, but most of all it took from French Romanticism. 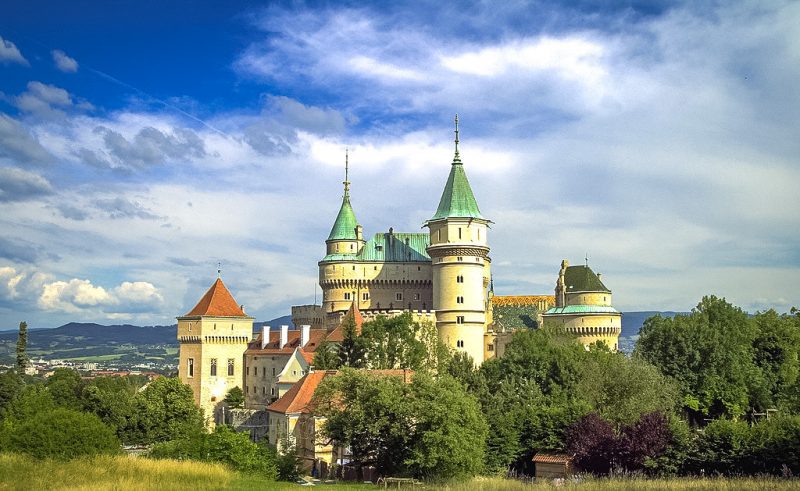 The colorful roofs and domes of Bojnický Chateau (Bojnický zámok) overlook the Slovak spa town of Bojnice, at the foot of Stražovské Vrchy. The romantic Versailles style castle is built on a rocky hill. A large natural cave stretches beneath the stone stronghold at a depth of 30 meters, containing two underground lakes.

The Bojnice Chateau holds the status of national cultural monument of Slovakia and the unofficial title of one of the most beautiful historical buildings in the country. There are several legends and mysterious facts about it, which are willingly told by the guides and the locals. It is also called the Castle with ghosts.

The history of Bojnice castle

The first evidence of the existence of the fortress on the southern slopes of Malaya Magura is found in the documents of 1113. On the travertine rampart there was a wooden fortress, which belonged to the monastery. It is known that in the XIII century it passed to the Poznanov family.

The wooden buildings were gradually replaced by stone ones, and in the Middle Ages the structure had already had a sewerage system and a water supply, which was rare at the time. The castle was owned by many noble families, it was also a royal possession – it belonged to King Matyas Korvin. The old tree, under which the ruler liked to sit, has been preserved and is referred to as the “King Matyáš Lime Tree”. 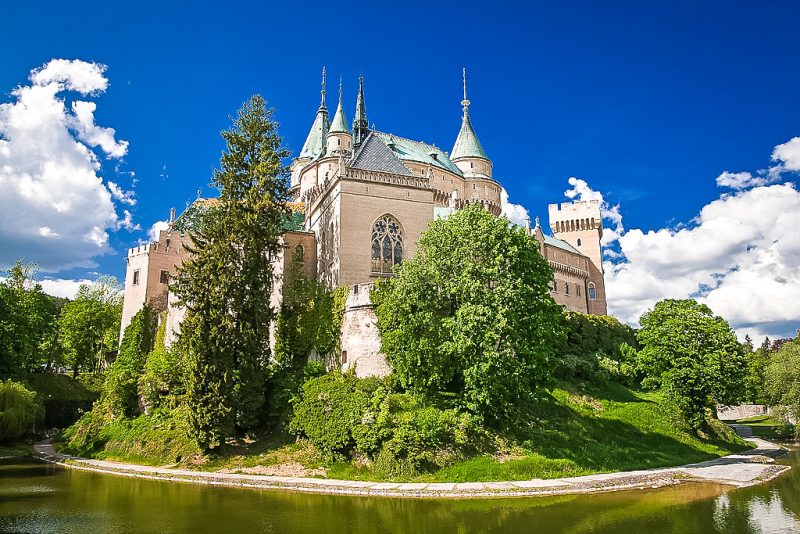 In the 16th century the next owners rebuilt the manor in the Renaissance style. In 1637 the Bojnice Chateau was given to Earl Paul Pálffy. By the end of the XVII century the manor was rebuilt in Baroque style.

In 1852 the new owner of the Palfi family castle became Earl Jan Frantisek, a romantic who was hopelessly in love with a young French aristocrat. The girl agreed to marry the count, but did not want to move to Bojnice – a squat palace in Slovakia was not like sophisticated French castles. Pálffy hired the renowned architect Josef Hubert and undertook a grandiose rebuilding. Thus an exquisite neo-Gothic palace modeled on the castles of the Loire was built.

While the twenty-year reconstruction was in progress, the beauty married. The inconsolable count remained a bachelor. As a sign of his bachelorhood, he decorated the spire of the castle’s main tower with a crown of thorns. Pálffy died in the summer of 1908, having ordered his tomb to be arranged in the castle cellar and the building to be turned into a museum. 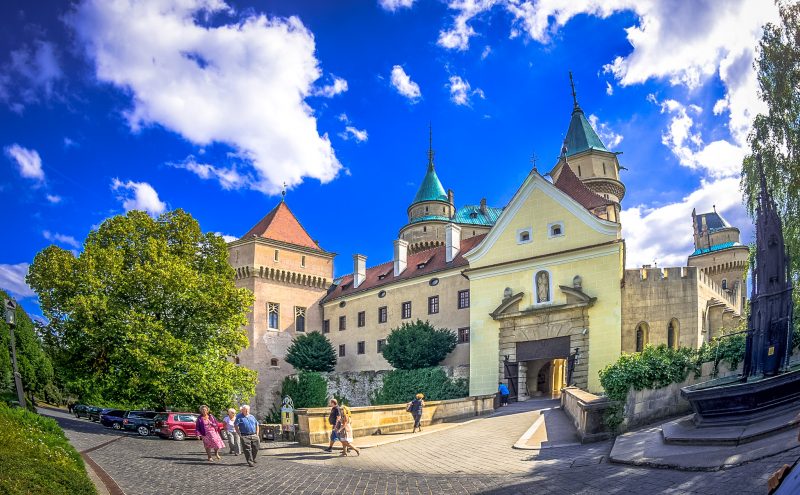 Entrance to the castle, photo by Kurt Bauschardt

The will of the deceased was not carried out immediately: the heirs resisted and quarrelled. As a result, both the castle and the collection of valuable art objects that Jan František Pálfi collected were sold.

The museum appeared only in 1950; by that time the building was nationalized. Many exhibits from the count’s collections were returned, and the interiors were restored. The Count was buried in a stone sarcophagus, the cracks in which began to leak in the 1970s a mysterious liquid that could not be chemically examined.

Today the Bojnice Chateau houses the Museum of Documentation and Presentation of Postmodernist Architecture (a branch of the Slovak National Museum). A tour of the natural limestone cave is also part of the program. 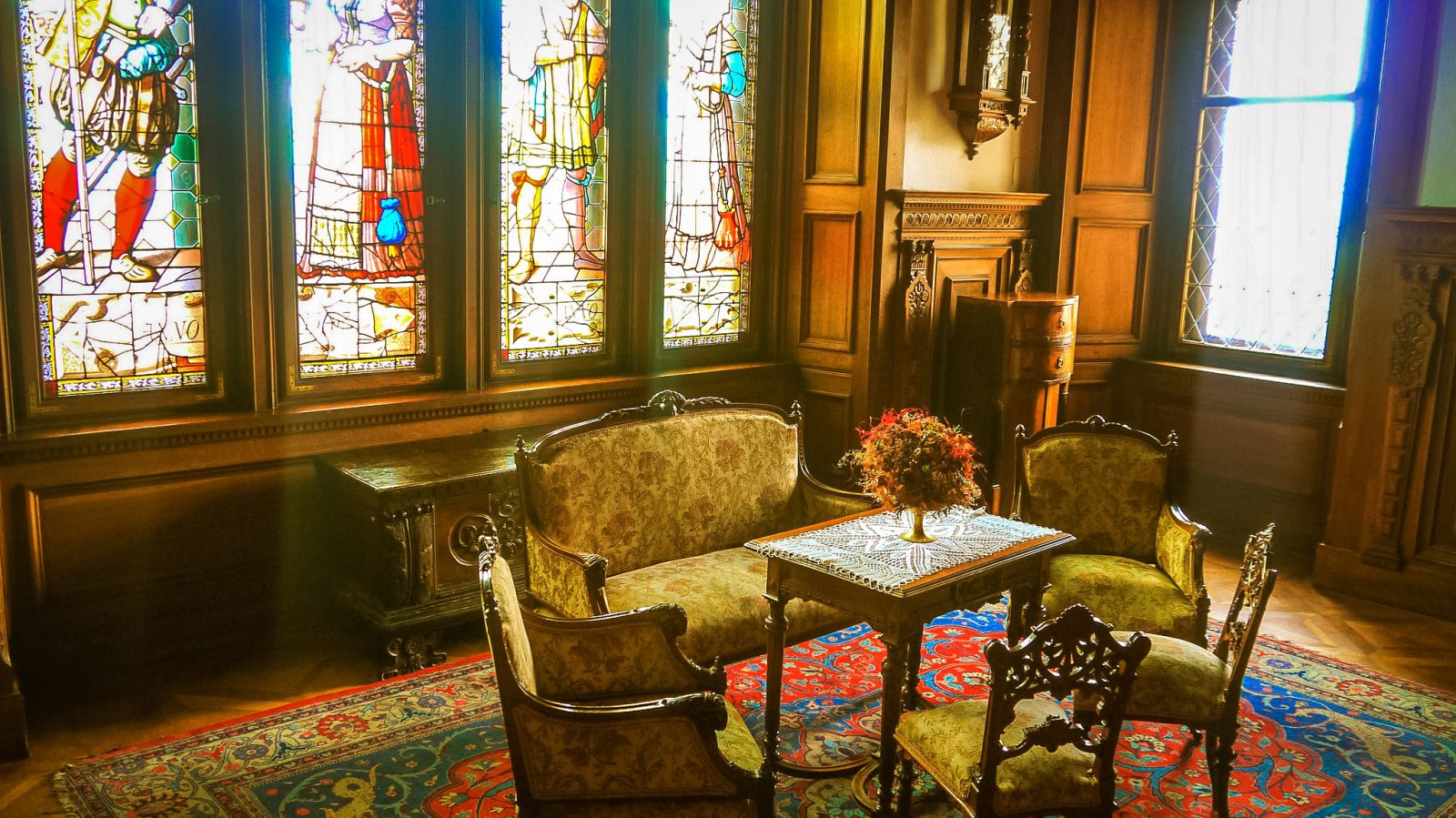 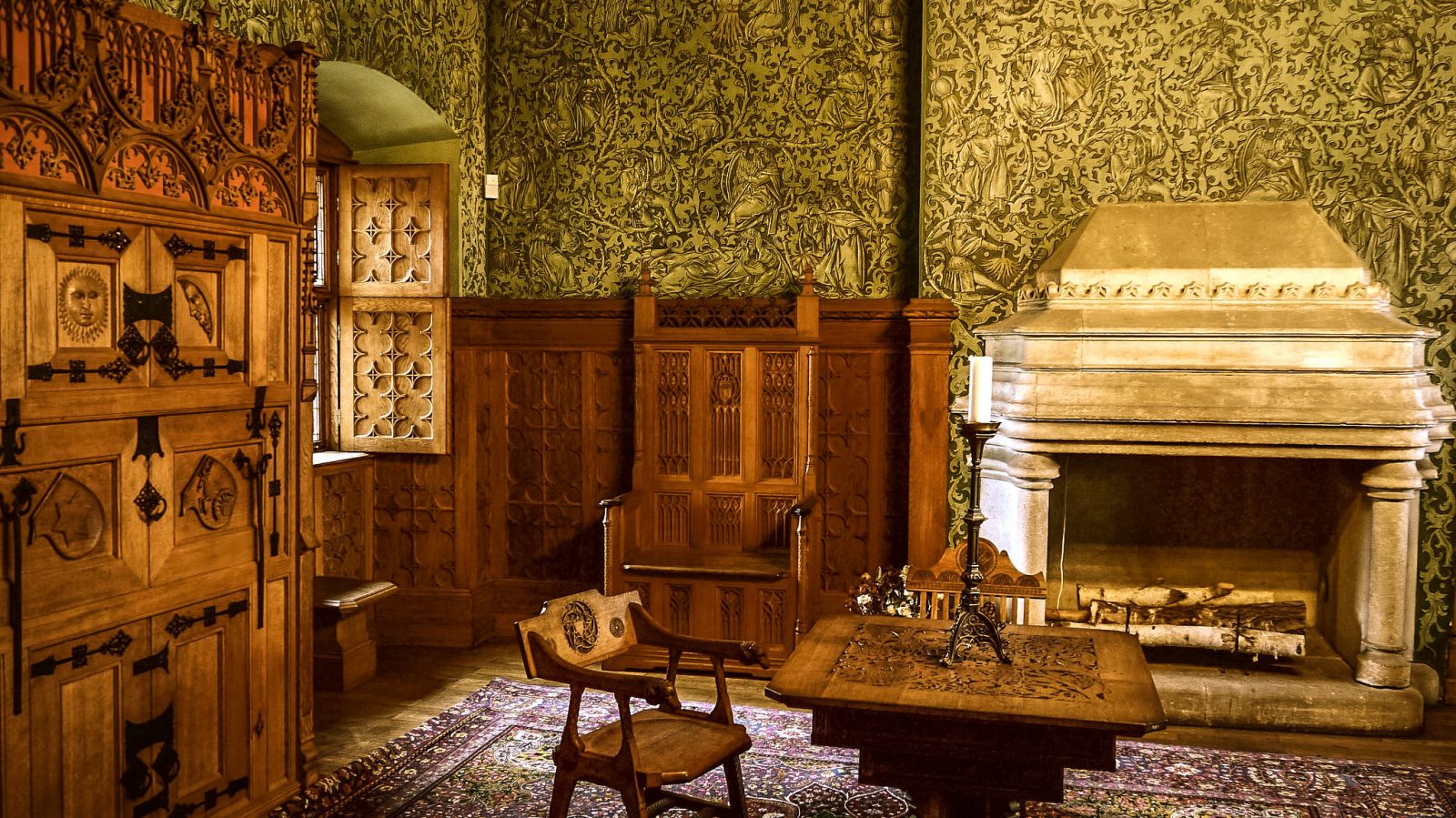 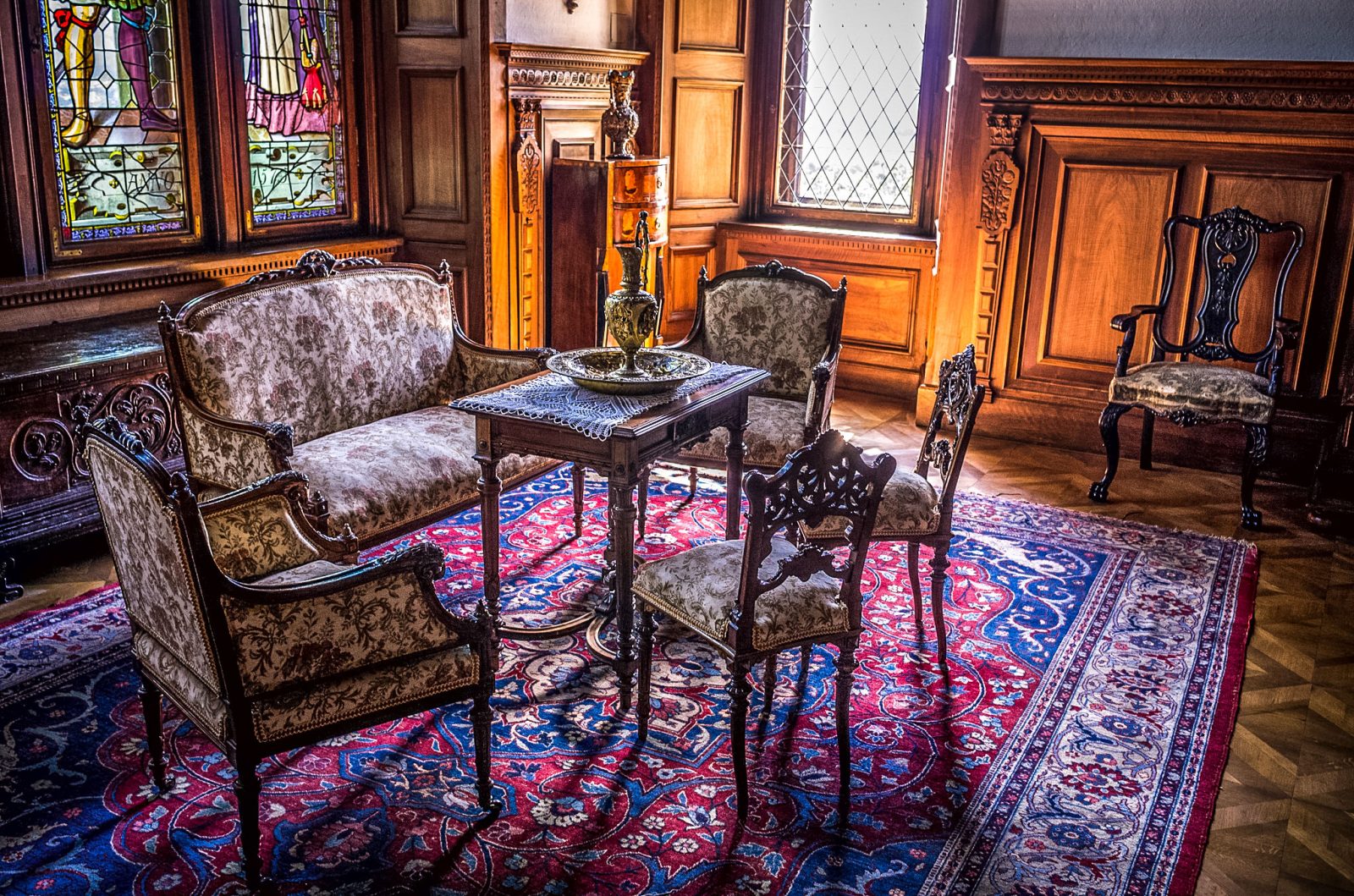 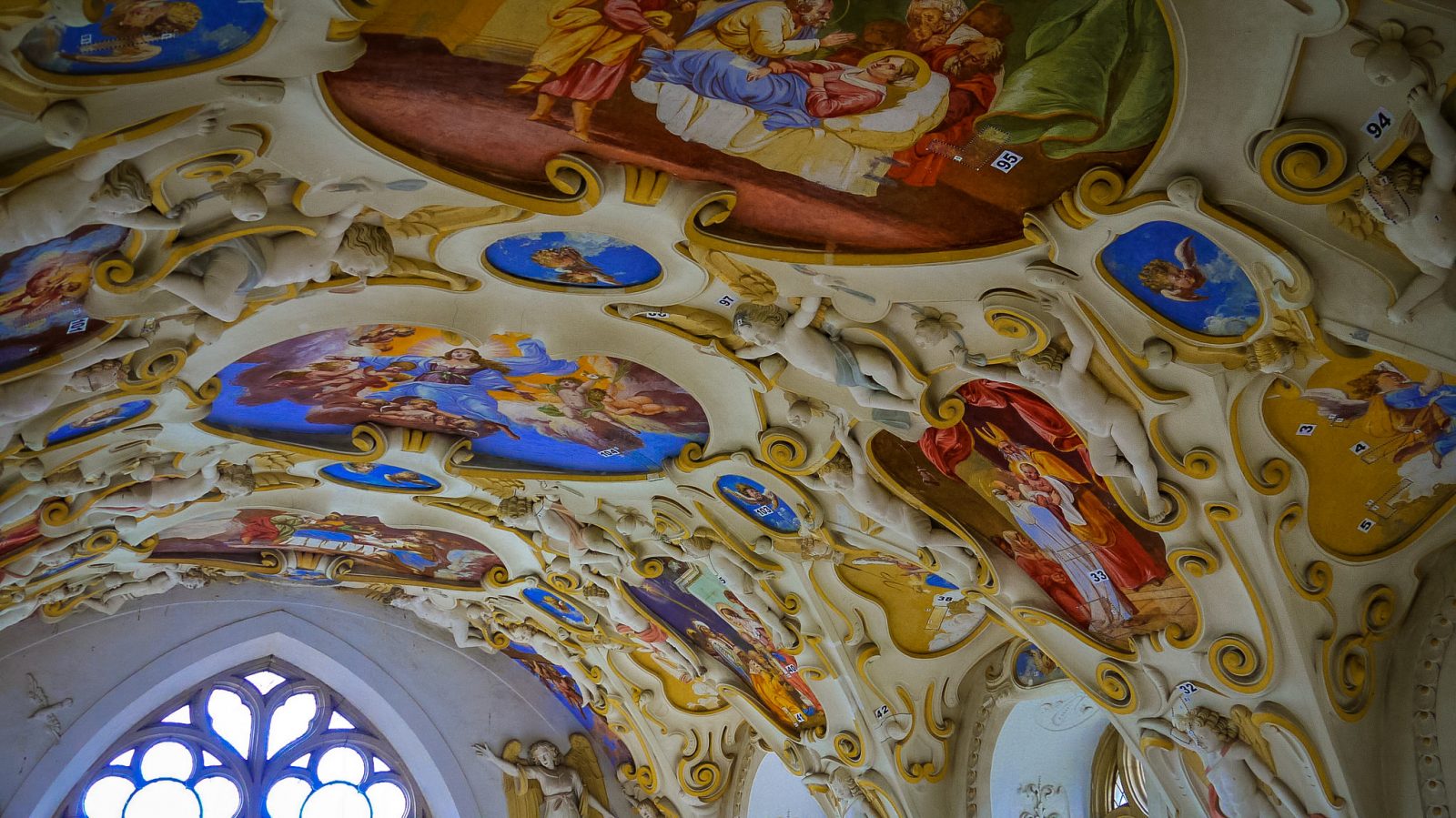 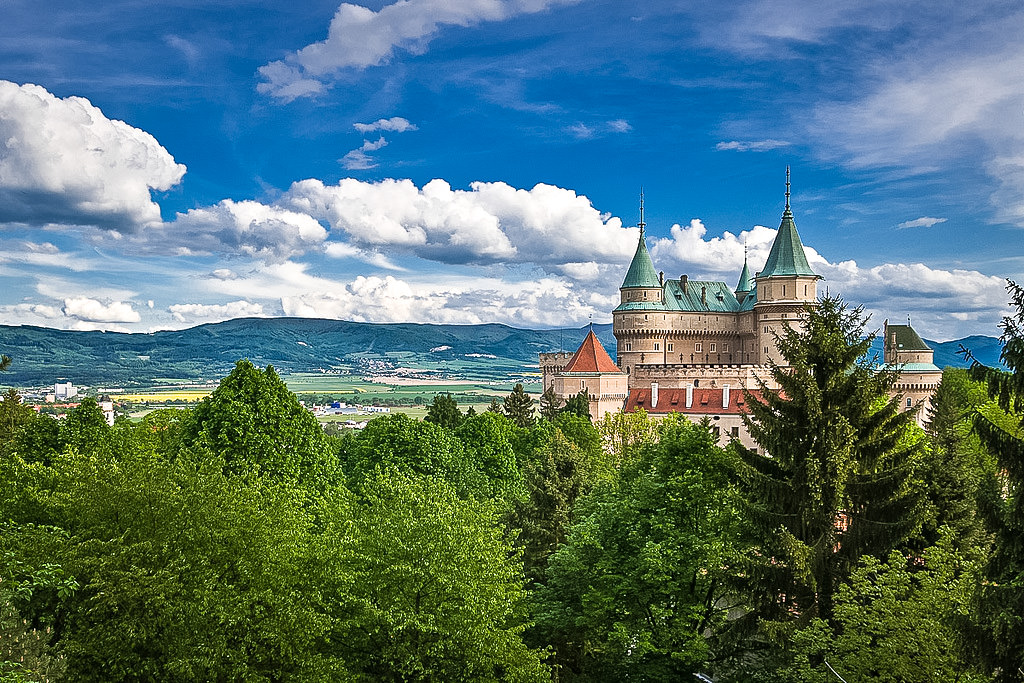 At the end of April and beginning of May the International Festival of Ghosts and Spirits takes place in Bojnice castle. Exhibitions, celebrations, fairy tale and fantasy films are filmed there. The fairy tale “The Sad Princess” was filmed in the castle.

It is advisable to stay in Bojnice for a whole day or more to explore the romantic castle and cave formed by one circular hall with a diameter of 22 meters. Afterwards you can have a swim in the thermal pool and take a walk through the zoo.

Bojnice Castle is open all year round, in summer and September without holidays, the rest of the months are Mondays off.

Admission costs €8. A fee of €2-5 is required for permission to take photos or make videos.