Bosco Verticale – a vertical forest among the stone jungle

Bosco Verticale is a unique residential complex in the center of Milan, Italy.

Amazing harmony of nature in the urban area. The sight of this engineering green miracle generates a sense of surrealism. But, let’s say at once, a pleasant feeling. 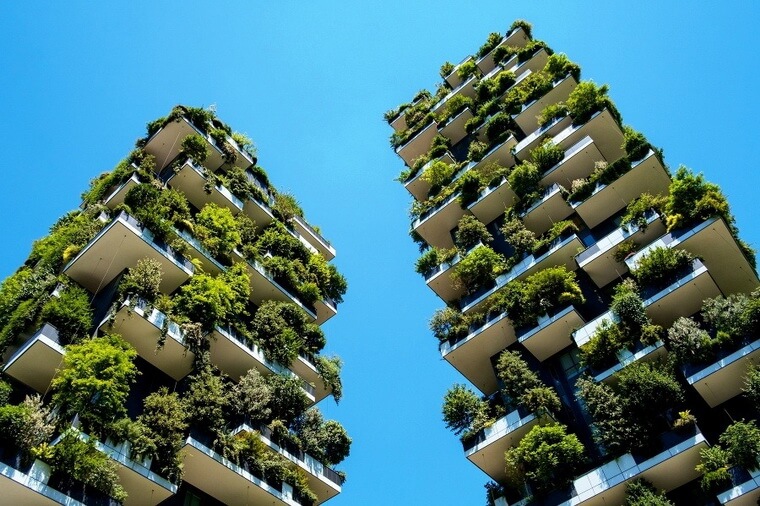 Stunning symbiosis of nature and city

What is a vertical forest

The complex consists of two towers with a height of 76 and 110 meters, with 18 and 26 floors, respectively.

The distinctive feature, as you have guessed, was the covering of the outer walls with plants and trees, giving them the appearance of an unusual forest. Since this forest extends upwards, it is called the Vertical Forest. 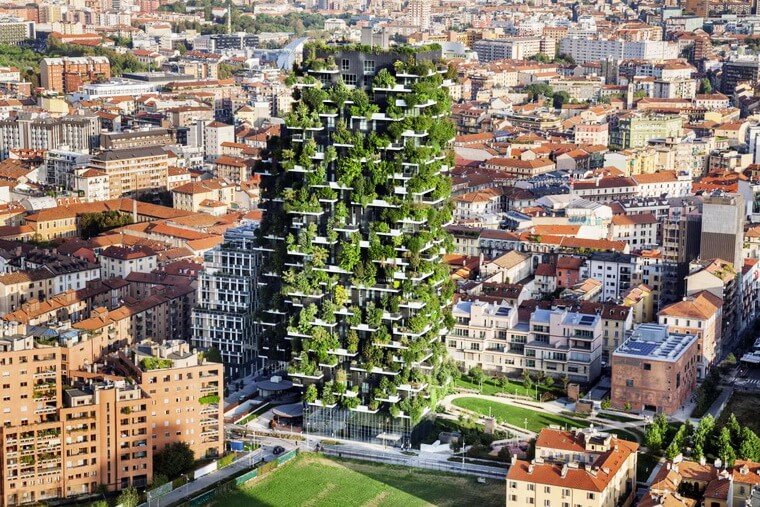 The vertical forest looks quite contrasting against the surrounding houses

Designed by a team of architects from Boeri Studio, Bosco Verticale was designed as “a home for trees, where people and birds also live”.

Interesting fact – According to architect Stefano Boeri, the construction of such a striking complex was inspired by Italo Calvino’s 1957 novel The Baron in the Trees. The protagonist of that novel decided to leave the earth and live in trees for the rest of his life.

Construction took place from 2009 to 2014 in Milan’s Porta Nuova Isola neighborhood. The complex was opened in October 2014 as part of an extensive renovation project.

Who grows in the Bosco Verticala 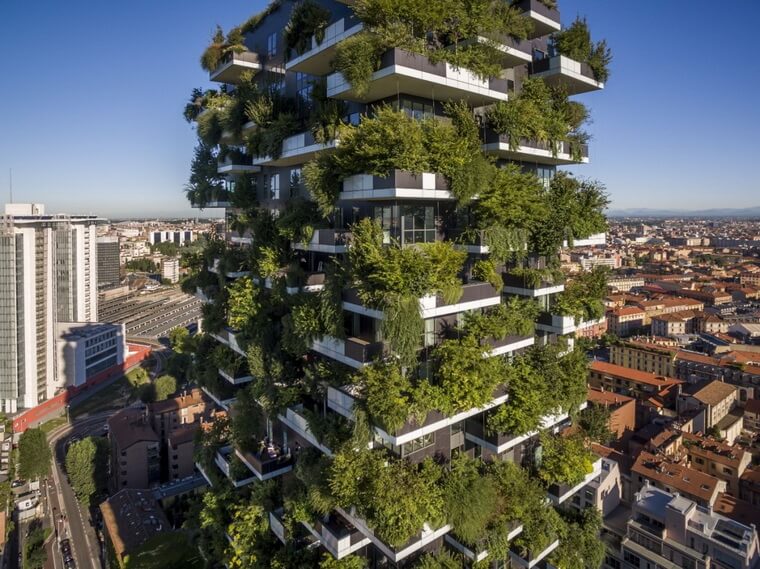 Did you know that the largest living organism on Earth is the forest? Not the entire forest on the Planet, of course, but a very specific Pando Forest.

Why this is done.

Note that the vegetation in Bosco Vertical is not just for beauty. Though it’s also for it.

READ
Lisbon and its attractions. Portugal.

Unlike standard facades of glass, stone and concrete, the vegetative shield does not reflect the sun’s rays, but filters them, creating a favorable indoor microclimate without harming the environment. In addition, such a green curtain regulates humidity, produces oxygen and absorbs carbon dioxide and microparticles. 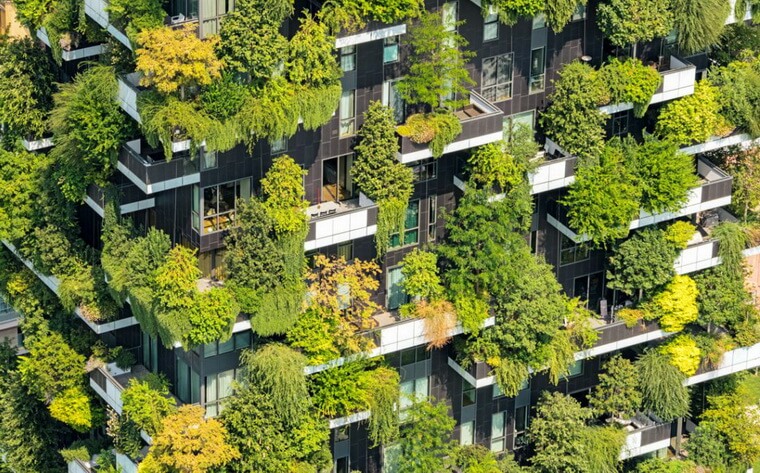 Some have violets on the balcony, and some have a whole forest.

In addition, the Vertical Forest can increase the biodiversity in the area. The amazing urban ecosystem is populated by birds and insects.

The combination of these characteristics has earned the project several awards.

The Bosco Verticale towers were recognized as the best skyscrapers of 2014. The project won the International Highrise Award, awarded every two years by the Museum of Architecture in Frankfurt.

In 2015, the jury of the Council on Tall Buildings and Urban Habitat (CTBUH) selected Bosco Verticale as the “Best Tall Building in the World 2015” at the 14th Annual Symposium held at the Illinois Institute of Technology in Chicago.

What’s missing from all this beauty is a waterfall. Do you think making a waterfall in a house is unrealistic? The Chinese would disagree with you; they’ve already made a skyscraper with a waterfall.

What do the residents think

It seems that all of the above sounds like a marketing ploy. But these words are confirmed by the inhabitants of the vertical forest (well, I mean people, not trees and birds). 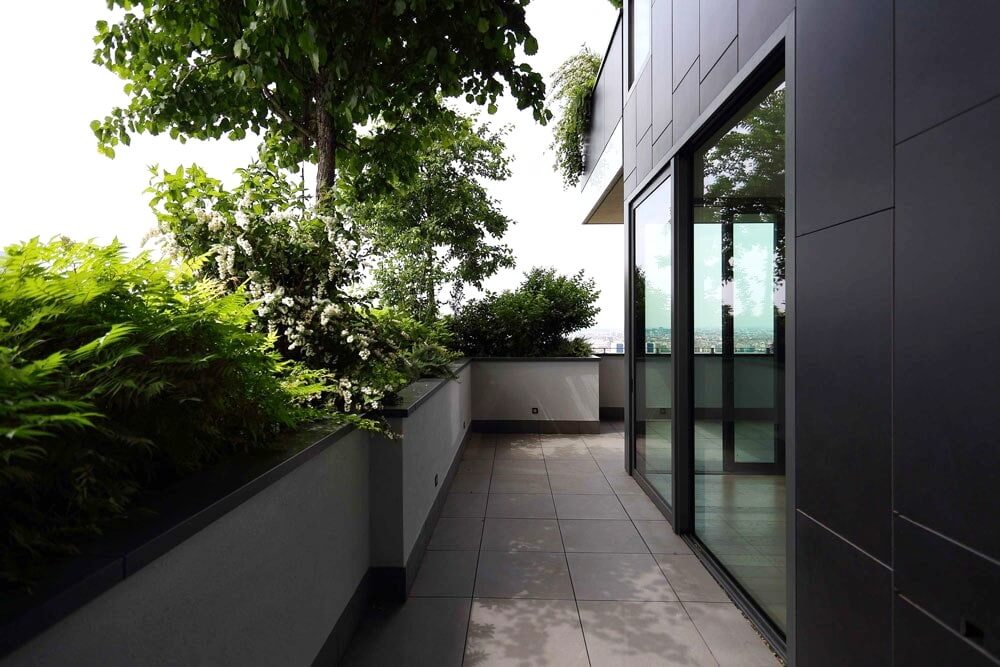 CNBC recently published an article about this unique apartment complex and found that the vegetation has a positive effect on the residents in many ways.

“I’ve lived in Bosco Verticale since it opened,” Simone Pizzi (one of the residents of Vertical Forest) told the news outlet. “It’s not like we live right in the middle of bustling Milan.”

“Having these plants right on the terrace, real trees, has definitely had a positive impact on my life,” Simone adds. “In the summer, the temperature drops and it feels like these plants have created a special microclimate, it’s very nice. We use less heat in the winter because of the greenhouse effect, and in the summer we use air conditioning less often because the air is cooler.” 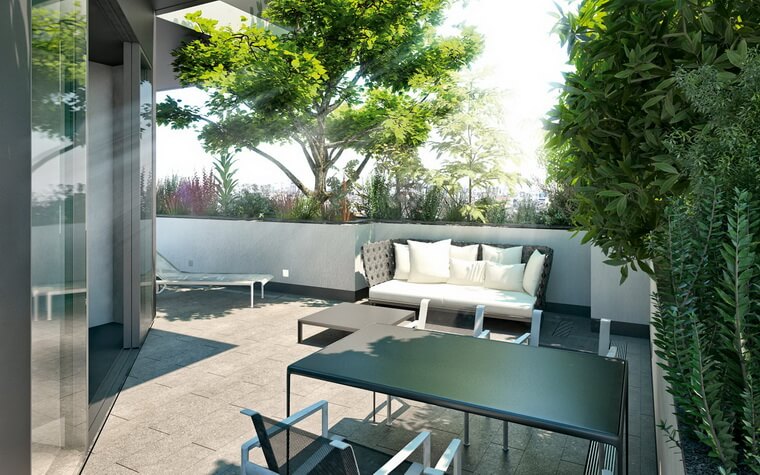 You wouldn’t know it’s in a skyscraper in the middle of a bustling metropolis.

The concept isn’t new, of course. There are similar buildings in other parts of the world. Edificio Santalaia, a plant-covered building in the center of Bogotá, Colombia. The Qiyi City Forest Garden residential complex in Chengdu, China. But not all are so successful with them. For example, the Chinese project recently made international news headlines after it turned into a mosquito-infested, ungroomed jungle.

In contrast, Bosco Verticale maintains its pristine appearance. How does it manage to do so?

Apparently, it’s thanks to the “flying gardeners.” This is the name of a specialized team of alpinist dendrologists. Once a year they descend from the roof of the towers, using climbing equipment, to carry out pruning, routine maintenance, treatment or other necessary work on the plants.

These people are called “flying gardeners.” Their work, while necessary, is very dangerous.

The irrigation system here is centralized. And the plants are constantly monitored by a digital automated system.

A few years after its opening Bosco Verticale in Milan is home to many animal species. According to some estimates, there are more than 1,600 birds and butterflies alone. It is noteworthy that all of them live in harmony with people (as, in fact, should be the case throughout the planet).

Among the cities of Italy, Milan is not very popular among tourists and Italians. The metropolis looks gray because of the lack of plants, life in it is expensive and the environment leaves much to be desired. In many respects the attitude to Milan has changed after the project Bosco Verticale, a “vertical forest” which changes its appearance depending on the season, was brought to life. There is a spring flowering of trees, and summer riot of greenery, and autumn colorful fading.

What is the Vertical Forest and where is it located 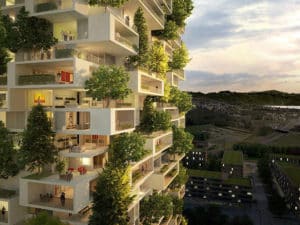 The Vertical Forest residential complex was built in Milan, in the fourteenth year of the twentieth century. It was built over five years in Porta Nuova, occupying the center of Milan. It is a kind of comfortable oasis with a park and luxury villas, with a refreshing coolness from the fountain flowing in the center of the city.

READ
Tunnel of Love and a steam locomotive as a dowry. Ukraine

Another amazing institution is the café, combined with a bookstore, called “Read. Eat. Dream”, which translates as “Read. Eat. Dream.” It is very pleasant to sit at a table with a cup of aromatic coffee and an interesting book.

It is an organic combination of a high-rise building with exquisite landscape design, designed to enrich the ecology of the city.

Two buildings, seventy-six and one hundred and ten meters high, on each floor are surrounded by terraces with green plants in a tiered style, which release oxygen and absorb carbon dioxide, protect those around them from dust and solar radiation, and humidify the indoor air.

To make the interior as green as possible, elevators for residents and lifting loads, stairs and other functional devices are placed on one side of the high-rise.

The idea for the creation of Bosco Verticale

In large cities, to improve the ecology and the environment have long planted trees, shrubs and other plants, creating alleys, parks and squares. This requires large areas, which Milan is woefully short of – land prices are too high. This gave rise to the idea of building a vertical forest, which was first voiced by Milan landscape designer Michel Brunello, but it was not so easy to bring it to life. 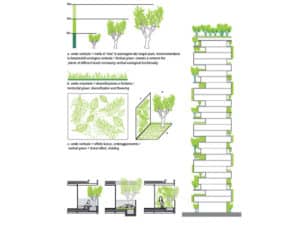 The Italian architects Boeri, Varra and Barreca, listened to the idea of landscaping in tandem with skyscrapers and created the Bosco Verticale project, which was conceived as an experimental in the field of architecture and botany. It was decided to build a complex of two high-rise buildings with a total of one hundred and thirteen apartments with five or seven rooms. Each apartment was to have a terrace with plantations. Small two-room and one-room apartments were not designed.

The project Bosco Verticale was developed by Italian architects, with the participation of horticulturists and botanists of Milan. The developers set a goal to improve the ecology of the city without occupying a large territory. As a result, the architects and their assistants managed to place a whole hectare of forest on the twenty-seven floors of the two buildings.

According to calculations, the cost of building the houses with trees and other plants was not much higher than it would have been necessary to erect an ordinary house. The construction costs only increased by five percent, but the benefits of the Vertical Forest were enormous. The Milan authorities supported the idea of building unusual houses in order to clean the city from pollution.

In 2012, the buildings of the right height were built, the next stage was the arrangement of facades and the creation of devices for greening the house. In the fall of 2014, the construction was fully completed. 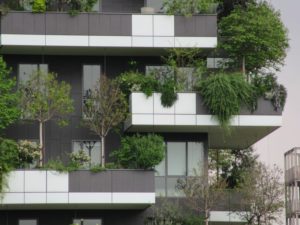 Incredibly beautiful house, erected in the center of the metropolis, not only pleases the residents with its appearance, but also brings tremendous benefits to the surrounding area. High quality and environmentally friendly materials were used in the construction. On the building are installed solar panels and generators of electricity, working through the power of wind. The high-rises were built in such a way as not to harm the environment, but to benefit the environment. At the same time, the goal was to make it comfortable for residents to live in these apartments.

In the summer, plants stop the sunlight from penetrating into the living space. Trees prevent dust from entering the rooms, absorb carbon dioxide and produce oxygen. In winter, they lose their foliage, which allows light to fully penetrate into the building.

An indisputable advantage of the Vertical Forest is the purification of urban air from dirt and dust, the production of oxygen, minimizing the radiation background. 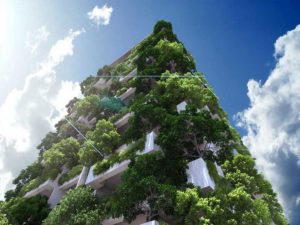 All types of seedlings were carefully selected by professionals. For two years, experts grew seedlings of tree cultures, thereby preparing them for unusual growing conditions. During this time more than two thousand species of plants were tested.

When planting the seedlings, the gardeners took care of safety. All trees have been tested for resistance to strong gusts of wind. The container for planting is securely fastened. All safety measures are taken to avoid further destruction and death of plantings.

Deciduous trees of different heights alternate with evergreen coniferous species. Such planting looks harmoniously in the autumn city, during the active leaf fall.

Watering and other subtleties of operation 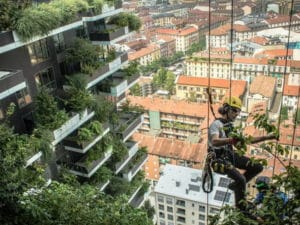 Equipped with an irrigation system – the water consumed by residents is purified, filtered, and then used for irrigation.

All plantings are supervised by specially trained people. The team monitors the growth, replanting if necessary, pruning, shaping bushes and trees.

For such work, cranes are installed on the roof of the building to lower workers to the desired level.

The Vertical Forest is located at 17 Via Gaetano de Castillia, Milano. You can reach the unusual buildings by metro from any point, get off at Porta Garibaldi station.

If tourists are in the center and have enough free time, we recommend to admire an unusual residential complex.