The oldest botanical garden in Paris

The botanical garden is part of the National Museum of Natural History, located in front of the main building in the 5th arrondissement of Paris.

It is also home to a small zoo known as the Ménagerie. Many people often miss the Jardin des Plantes, and yet this part of the Latin Quarter gives everyone a chance to see the most magnificent treasures of the French capital.

History of the garden since the 17th century

The botanical garden was first planted by the king’s physician in 1635, since as early as 1626 Louis XIII planned to turn the place into a cluster of medicinal herbs. Then in 1640 the inauguration and opening of the garden to the public took place. Today the Jardin des Plantes covers an area of 75 acres.

Interesting fact! The National Botanical Garden of France – one of the oldest in Europe – was planted in the XVII century on land that was used for mass graves during the plague. In 1635 it was a center for botanical research and home to naturalists from all over Europe.

When Colbert (the man responsible for the appearance of almost all of Paris) took over the management of the gardens at the end of the seventeenth century, he appointed a special team of botanists. Then in 1739 his authority passed to the Comte de Buffon, who greatly expanded the garden. Features such as a labyrinth were added (it still exists today) and the research center was improved.

The orange trees were the first fragile seedlings brought here. They needed protection from cold and freezing. “Orangeries” were built for this purpose before they were replaced by wooden and glass greenhouses to protect other plants brought back from exploratory voyages during the eighteenth century. During the Revolution (1793), when the garden became part of the Natural History Museum, its name was changed from “Jardin du Roi” to “Jardin des Plantes”.

What to see in the Jardin des Plantes

READ
The Black Forest National Park in Germany, in detail

The garden is divided into sections:

It has 5 structured sections where the flowers bloom from April to autumn. Their hues and appearance change throughout the year. It’s a great place to wander and refresh your memory with the names of your favorite flowers.

Demonstrates 4,500 varieties of plants and shrubs from various regions of the world. Students can explore the complex world of flora in a sort of classroom without walls or a ceiling.

Shows representatives of the plant and animal life of the French capital in their natural habitat, as well as the stages of their evolution.

This is where you can admire fruits and vegetables. The section demonstrates the variety of edible plants and the process of their cultivation.

It was created in 1990 and includes many varieties of roses and rose trees. It is the most romantic place in the Jardin des Plantes.

Demonstrates the “flowers of kings,” cultivated because of their beauty as well as their medicinal properties.

As the name implies, full of iris and other vibrant, distinctive flowers. It is a place of meditation and a cluster of self-taught artists.

This is a section sheltered from visitors where a variety of feathered and insects thrive.

It was built from an embankment that was a landfill during construction work in the fourteenth century. The limestone in the soil makes it dry and this is an ideal environment for Mediterranean plants to grow.

A step back in time, many millions of years. It shows what the world would have looked like in dinosaur times – complete with models of large animals.

The four tropical greenhouses contain plants and trees from around the world and have fully restored the original 17th century grandeur. The “Tropical Forest” maintains a temperature of 22°C and high humidity so that visitors can see fig and banana trees, palm trees, climbing and parasitic plants. The “Desert” features species that thrive in arid places, such as cacti, avocados, coffee and pepper trees. “New Caledonia” contains species from tropical and dry forests, shrubs, shrouds, and mangroves. The Plant History section shows fossil remains as well as the development of flora on Earth more than 430 million years ago.

You can see animals in the Ménagerie Zoo or, if you have time, visit the Natural History Museum.

Botanical Gardens on a map of Paris

Opening hours vary depending on the season – Jardin des Plantes is open from dawn to dusk. 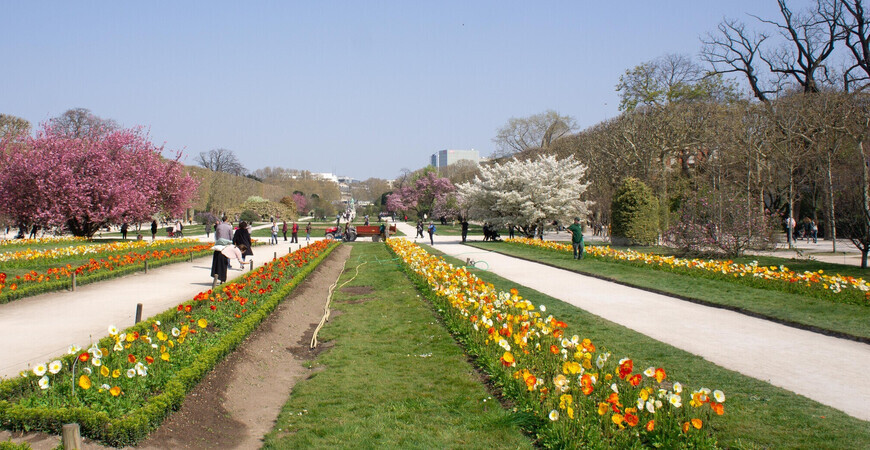 The botanical garden or Jardin des Plantes in Paris, located in the 5th district of Paris, on the left bank of the river Seine, covers 28 hectares of land. The garden is the headquarters of the National Museum of Natural History and all the buildings, archives, libraries, greenhouses, a zoo, works of art and collections of plant specimens are considered the national historical monuments of France.

The name “Jardin des plants” is derived from its official historical name “Jardin royal des plants médicinales” (“Royal Garden of Medicinal Plants”), which derives from the original purpose of the garden in the XVII century.

The area of the Jardin des Plantes in Paris includes several buildings with exhibits: The Paleontological Gallery, the Gallery of Mineralogy and Geology, the Gallery of Evolution, the Children’s Gallery and other greenhouses. All of these galleries are officially considered museums.

The Botanical Gallery was opened in 1935. It includes a botanical laboratory and the French National Herbarium Museum with the most impressive collection in the world (almost 8 million plant specimens). The building also houses a small permanent exhibit about botany. In addition to the greenhouses, the Paris Botanical Park also has a small zoo, founded in 1795 by Bernardin de Saint-Pierre.

The Garden of Plants has a botanical school that teaches botany to all comers and also exchanges various seeds to maintain the biotic diversity. About 4,500 plants are arranged here in families on a single plot of 10,000 square meters. Three hectares are set aside for ornamental plant displays. The alpine garden includes 3,000 species of plants. Specialized buildings, such as the large Art Deco winter garden, as well as Mexican and Australian greenhouses, grow regional plants not native to France. The Rose Garden, established in 1990, has hundreds of species of roses and rose trees.

The Orangery of the Botanical Gardens in Paris

A special pride of the park area are the orangeries. The large orangeries of the Botanical Gardens are a set of five metal-framed greenhouses. As part of the National Museum of Natural History, they serve to preserve and acclimatize plants brought back from trips by naturalists and to introduce the public to exotic plant species (of the five greenhouses, four are open to the public, while one is used as a nursery and reserved for horticulturalists and museum botanists). Even during the coldest winters (1945 and 1953), plants survived in both greenhouses.

The first greenhouse was built here back in 1836. Rogalt de Fleury built it of glass and metal. At the time it was the largest greenhouse in the world. The height of the structure reaches 15 meters, its area is 20 by 18 meters. At a constant temperature of 22 degrees, it grows plants from America and Mexico, South Africa and Madagascar, as well as other arid regions of the world. The New Caledonia greenhouse (the old Mexican greenhouse) is adjacent to the rainforest greenhouse. It is also known as the “succulent greenhouse” or “cactus greenhouse. It houses most of the plants that now make up the living collections of the desert and arid greenhouses, devoted entirely to the flora of the New Caledonian islands.

The second greenhouse was built in 1957 and named the Winter Garden (now the Rainforest Greenhouse). It measured 50 meters long and 15 meters high. The temperature inside is 22 degrees and the humidity is more than 80%, which provides the conditions of the humid tropics. The greenhouse includes: a creek, ficuses, palm trees, banana trees, climbing plants, orchids, and even an artificial cave. There is also a fig tree, a palm bamboo tree, a coconut tree, and three ferns.

READ
Lodi Gardens in Delhi, How to get there and description

The Desert and Dryland Orangery (replacing the colonial orangeries) is the newest, as it was built between 2005 and 2010 during the last major restoration of the complex. Opened in 2010, it runs along the right side of the rainforest greenhouse to which it is attached. In this greenhouse one can find characteristic plant species (cactus, thrush, agave, avocado, coffee, pepper) of arid territories: the United States, Mexico, South Africa, Madagascar, the Arabian Peninsula, Australia, as well as some others.

The Plant History Greenhouse allows every visitor to learn about fossil plant specimens in comparison to living species of modern plants. The greenhouse is also sometimes called “paleobotanical greenhouse” and presents the stages of development of flora since the emergence of terrestrial plants (embryophytes) 430 million years ago.

Formation of the Botanical Gardens of Paris

Founded in 1626, the garden was planted by Guy de La Brosse, Louis XIII’s physician, and existed until 1635 as a medicinal herb garden. It was originally known as the Jardin du Roi. In 1640, the garden was opened to the public. After a period of decline, Jean-Baptiste Colbert took over the management of the gardens. In 1792, the royal menagerie was moved to the gardens from Versailles.

On June 10, 1793, the National Museum of Natural History, the true heir to the Royal Garden of Medicinal Plants, was founded. Today, it is a great institution for scientific research and the exchange of knowledge, which brings together 12 attractions in France, including the Jardin des Plantes.

The Gallery of Mineralogy and Geology opened in 1841, the Gallery of Zoology in 1889, and the Gallery of Paleontology and Anatomy in 1898. In 1931-1936 the reorganization of the Alpine Garden took place. In 1935-1936 the Rainforest Greenhouse was built and in 1938 the Ecological Garden was established. In 1964 was founded Garden of irises and perennials), in 1990 – planted a rose garden, in 1992 – created the garden. In 1994, the Great Evolution Gallery was opened, and in 2010, the Children’s Gallery and the reconstructed School of Botany were opened. In 2017, the “Virtual Reality Cabinet” was opened.

The Paris plant garden in numbers:

Admission to the Jardin Botanique de Paris is free for all. You only need a ticket to visit the greenhouses. You can visit them by buying one ticket (cost from 5 to 7 euros) per person, which is valid for all four open greenhouses.

The Plant Garden, the Rose and Stone Garden, the Peony Garden and the Botanical School are open to visitors daily from 07:30 to 19:00 (summer) and from 08:00 to 17:30 (winter). The greenhouses are open every day except Tuesday from 10:00 a.m. to 5:00 p.m. The iris garden is open Monday to Friday from 08:00 to 16:00. The last entrance to the Jardin des Plantes de Paris is available 15 minutes before it closes. In case of bad weather (snow, ice, strong winds, high temperatures), the Jardin des Plantes may be closed to the public indefinitely.

How to get to the Jardin des Plantes in Paris

The Jardin des Plantes in Paris is located near the Austerlitz train station and is at the intersection of many urban public transport routes.

The nearest metro station to the garden is called “Gare d’Austerlitz”. It is located on lines 5 and 10. Also nearby are stations “Jussieu” lines 7 and 10, “Place Monge” line 7 and “Quai de la Rapée” line 5.