Several hundred large rocks have been lying on the picturesque beach of New Zealand for thousands of years. They are not just rocks, but one of the popular attractions of the southern part of the country.

Tourists from all over the world come to the beach of Kehoe Hohe for them. This wonder is called Boulders of Moeraki (after the nearby village). The attraction is well advertised, to attract travelers boulders even created a personal website.

Similar interesting places, where you can see unusual stones and boulders from different eras, are available in different parts of the world. But the Moeraki Boulders are considered the largest cluster of large stones of bizarre shapes. In addition to rocks, the area boasts a beautiful beach and charming sunsets.

The most unscientific versions of the origin of Moeraki Boulders

Mankind learned about the existence of Moeraki Boulders in the first half of the nineteenth century, during the colonization of New Zealand. Europeans saw a long beach, studded with hundreds of large boulders of oval and round shape. The size of the stones varies from one meter to two, some are on the beach, some rest in the sea, some barely peep out of the sand.

Some of the stones are perfectly flat and smooth, some have cracks, scraped surface. Some boulders split in half or scattered into pieces and lay like bizarre flowers or turtles.

Behind the rocks stand hills of bizarre shapes. The local aborigines told the white men the story of the appearance of large stones and hills on the coast. Long time ago a sailing canoe, in which the ancestors of local Aborigines sailed in the pitch dark approached the shore. The first people were looking for new lands, and on their way they took baskets filled with bread, potatoes and pumpkins.

The boat did not have time to dock and was broken up by a storm. Some people escaped, the baskets of food were thrown by the waves onto the sand. Morning came and for some reason some of the people turned into hills and the baskets and food became petrified and boulders.

White people themselves for years came up with different theories as to how such a mass accumulation of boulders could have arisen. They were called dinosaur eggs or dragon eggs, and some individuals spoke of fossilized excrement from prehistoric animals. The stones have even been mistaken for huge algae washed ashore millions of years ago.

People who believe in aliens from outer space do not lag behind the lovers of prehistoric nature. According to their version, the stones are the work of aliens who created disguised transmitters for their needs, or simply left their offspring.

What do scientists think of the Moeraki Boulders

Scientists, after carefully examining the rocks, have concluded that the stones come from the Cenozoic era. The age of the boulders is not less than 60 million years and each stone was “born” during 4-5 million years.

The essence of the stones is sand, silt, clay and calcite, which binds them together. Later quartz, iron and hard dolomite were added to the composition. The structure of the boulders is similar to an egg, with a soft filling on the inside and a hard shell on the outside. When the surface breaks apart under the influence of the environment, the stone falls apart. The pieces of stone look like shards of earthenware.

The stones were born, like pearls in a clam shell, in liquid mud. This factor conditioned their streamlined shape. The core, floating in the liquid, built up layers, absorbing all the available components, and then it solidified. Stone formations of this type are called concretion-septariums.

Scientists and tourists are also aware of other accumulations of giant stones. For example, the spheres of Champ Island, Koutou Boulders in the same New Zealand, “balls of the gods” in Costa Rica.

Good preservation of boulders was provided by the seabed. For millions of years they lay peacefully in the sediment until, after an earthquake or some other catastrophe, they rose up with the new patches of land. Some of the stones can be seen on the beach (they are gradually crumbling under the influence of the climate and waves), some peep out of the water, the rest still rest on the seabed.

How to get to Kehoehoe Beach

When planning yachting in New Zealand, you can include a visit to the southern part of the island and Koehohe Beach in your itinerary. You won’t be able to anchor near the boulders themselves, but you can dock in a nearby cove.

You can see Moeraki Boulders with your own eyes when you travel around New Zealand by car. You can stay in comfortable conditions in the large city of Dunedin (it has its own urban landmark – a road, very steeply descending the mountain). In the city there is the International Airport Danidin, so you can fly to your destination with connections.

In town you can stay in a comfortable hotel and rent a car. The road to the beach of Koehoehoe (75 km to the village of Moeraki) goes along the picturesque bay of Otago. The beach, dotted with ancient stones, is approximately 300 meters long.

You can combine sightseeing with sunbathing and swimming in the sea. You should take into account the stony terrain when entering the sea. Impressions of the trip will be unforgettable, especially since the beach is an ideal place for a photo shoot.

In New Zealand there is a unique place – the beach with perfectly round stones – Moeraki Boulders. 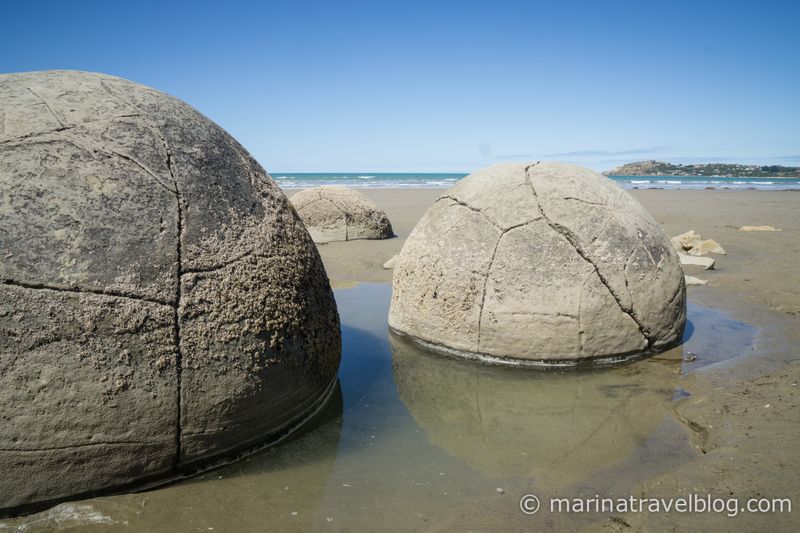 Today we will tell you about this mysterious place.

Bonus: a map of the main attractions in New Zealand.

What are the Moeraki Boulders

Wikipedia suggests that there are several hundred stone spheres lying on the 300-meter long beach of Koehohe. Some of them are on the beach, some are in the water, and some are split into pieces. 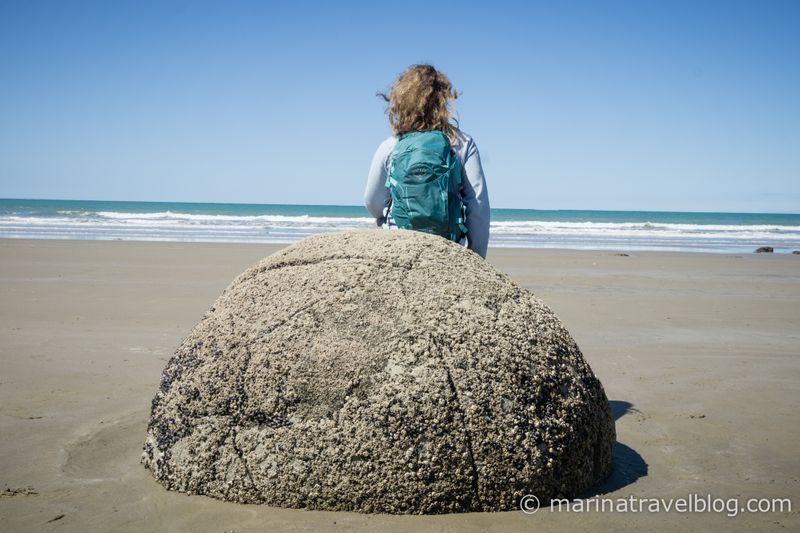 They were formed during the Paleocene 65-56 million years ago!

Some of the globules are smooth, some have patterns that resemble a tortoise shell.

The hypotheses about what these mysterious stones are are astounding: traces of aliens, remnants of ancient ships, bowling balls for the gods, dinosaur and dragon eggs. 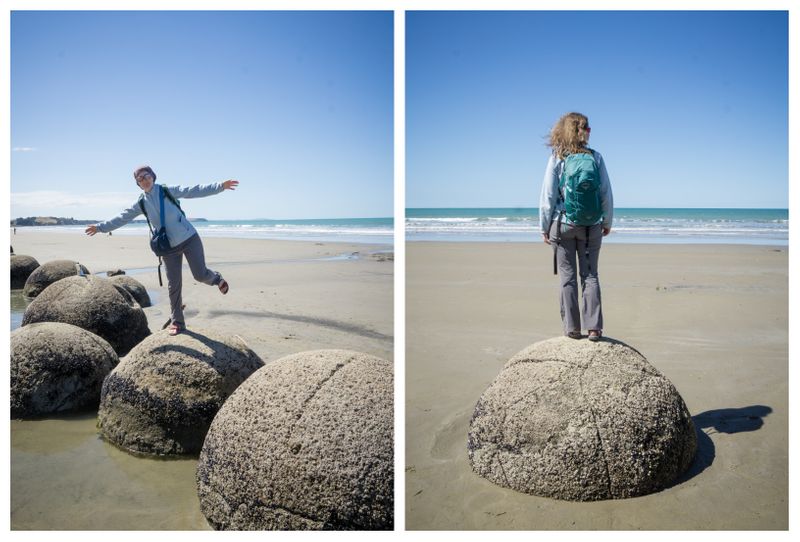 According to Maori legends, these boulders are just food

Namely pumpkins, potatoes and other vegetables that came here from the wrecked mythical canoe Arai-te-uru. It ran aground near the Krok Beach and finally broke up on Koheohe Beach. The rocky promontory above the beach is what the captain’s body turned into.

What do you think of the legend?

Scientists examined these round rocks and came to the conclusion that they consist of sand, silt and clay cemented with calcite. That’s how the beautiful legends and speculations were shattered. 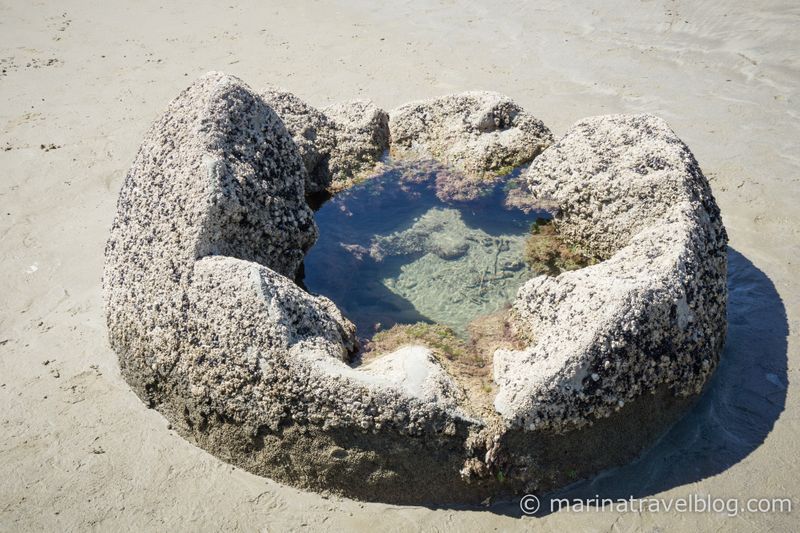 For photography it is better to come here at sunrise or sunset. At this time you can catch the reflection of the stones in the wet sand. Although, we were there in the daytime, and also liked it 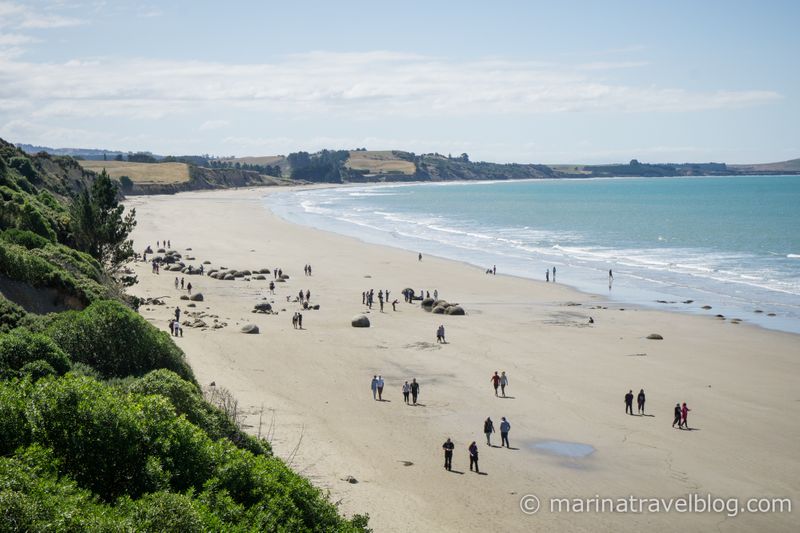 There is a restaurant near the beach – you can eat a huge plate of seafood for two for 36 NZD. They were a little overcooked, but still delicious.

The restaurant has a free toilet .

Moeraki Bolders on a map and how to get there

Koehohe Beach is located between the towns of Oamaru and Dunedin in the province of Otago on the South Island of New Zealand.

READ
The beach with the whitest sand in the world - Hyams Beach. Australia

The best way to get there is by rented car – it will bring you very close to the beach and you can not depend on bus schedules.

We usually compare prices and conditions on the aggregator sites, which collect offers from different rentals, and choose the best option:

The bus Danidin – Kreischerch (3 times a day) passes by Moeraki. From the fork it’s a 600 meter walk.

Tickets and schedules: https://www.intercity.co.nz/ (if you buy in advance, you can get promotional tickets for 1 NZD).

Hitchhiking is also common in New Zealand , especially since this is a busy route.

Our review of Moeraki Boulders

If you’re driving by, it’s definitely worth stopping by to see the boulders! Especially at sunrise or sunset. But making a long detour from the other side of the country just for them makes no sense.

Sign up and stay up to date with all the news!

Read about other natural beauties of the world:

Any questions left? Any clarifications or additions? Leave a comment!