The Inca Bridge and the dead hotel. Argentina

The majestic Andes mountain range holds many secrets, mysteries and sights. The Andes run through all of South America. Including the territory of Argentina. High-high in the mountains of western Argentina, 10 kilometers from the border with Chile is the Bridge of the Incas (originally Puente del Inca). Built it … no, not the Incas, but the forces of nature.

Bridge of the Incas on the map

The Inca Bridge is a unique natural formation about 50 meters long and about 28 meters wide. The arch of the bridge is 27 meters high and is located above the Mendoza River. The bridge is about 8 meters thick at its narrowest part. And if you look closely, you might think that this bridge was created artificially, and then was wrapped in a blanket of stone. But man was not involved in its construction. Everything was created by the forces and means of nature. 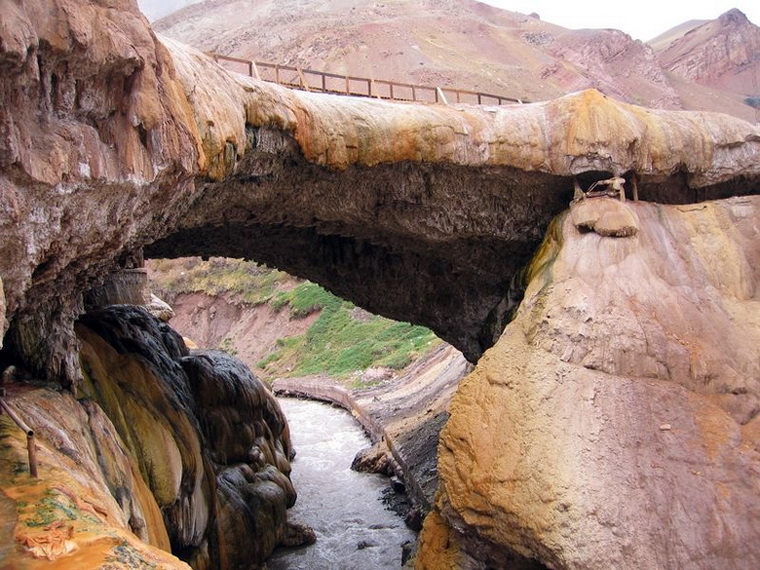 Bridge of the Incas

The theory of the Inca Bridge

The Inca Bridge is located at an altitude of 2,719 meters, surrounded by many mountain peaks. The accumulation of mountains tends to produce rockfalls and snow avalanches.

There are several geothermal springs in the vicinity. These factors have been fundamental in advancing the theory of the bridge’s origin.

Scientists suggest that this natural landmark appeared as follows: originally this formation consisted of several layers. The first one was formed by snow and ice, which avalanches descended from the mountain slopes. The second layer was already formed by hard rocks of rock debris and sand.

Gradually this layer became frozen and soaked with water from geothermal springs. The water in them had a high degree of mineralization and became a binding element, a kind of cement, of the future construction.

The Mendoza River, on which all this mass had fallen, began to patiently grind away the lower layer, as you remember, consisting mostly of ice. The event was not difficult for the river – it successfully made a passage under the layer of stones, which resulted in an arch and a bridge. 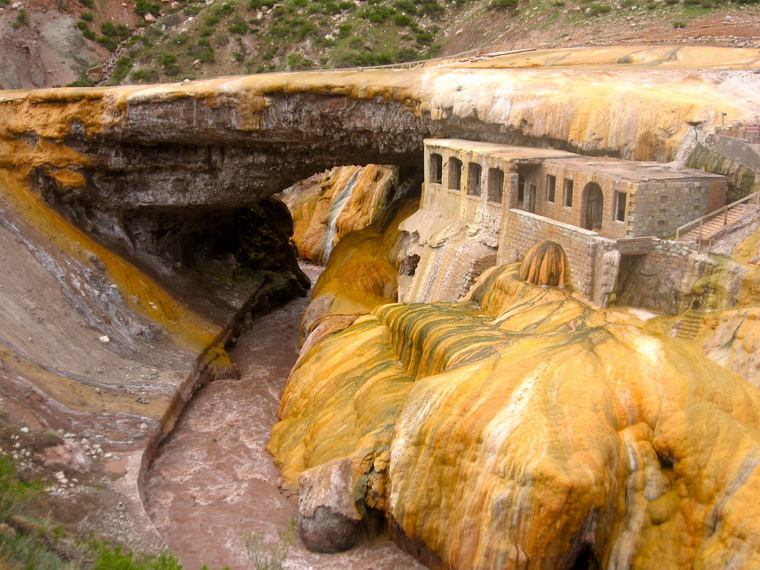 The legend of the Inca Bridge

In local folklore about the appearance of the bridge there is one legend in three variations. That is, the general concept and protagonists in the myth are the same. They differ only in the moment of the bridge formation.

An Incan chief had an heir who became severely ill and paralyzed. None of the treatments were effective. The chief was then approached by wise men, who told him that the heir could only be cured by miraculous springs located far to the south.

The chief had no choice, so he gathered a band of faithful warriors and took his son and set out from Cusco on a journey of more than 2,000 kilometers.

For many months they had been walking to the goal, and finally they reached a mountain gorge, at the bottom of which there was a stormy river. All they had to do was to cross it and get straight to the cherished healing springs.

Then the narrative diverges into three versions.

Geothermal Springs at the Inca Bridge

As you understand, the legends talk about those geothermal springs, which (according to scientists) were used to form the bridge.

There are five such springs with their own names in the vicinity of the bridge. These are Mercury, Venus, Mars, Saturn and … (who would have thought!) Champagne. All of them are saturated with many salts and minerals, including soda, sulfates, carbonates, alkali metals and sodium chloride. Interestingly, the water is clear and warm. Its temperature is 33-38 o C, which is very comfortable for swimming. This was the reason for the construction of a hotel near the Inca Bridge.

Hotel by the Inca Bridge

You probably noticed that almost under the bridge there is an abandoned building. It is one of the structures of the old Puente del Inca Hotel of the same name. 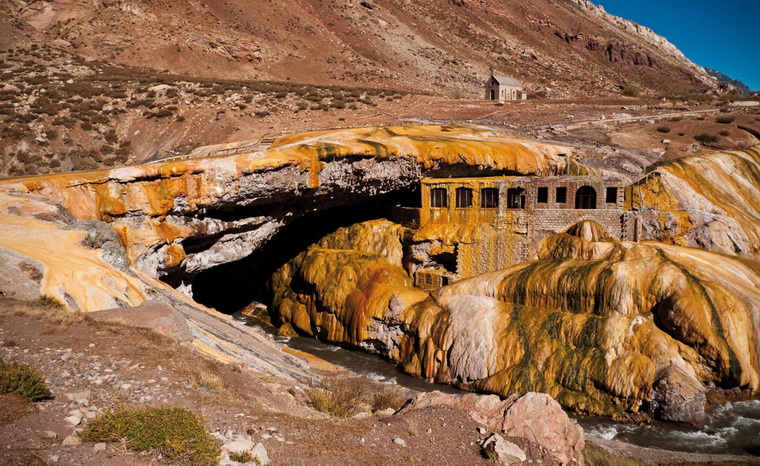 The building under the Inca Bridge

The geothermal springs in the area of the bridge are considered medicinal, so in 1925 a high-class, for those times, hotel was built here. Only the wealthiest people could afford to rest and heal there. 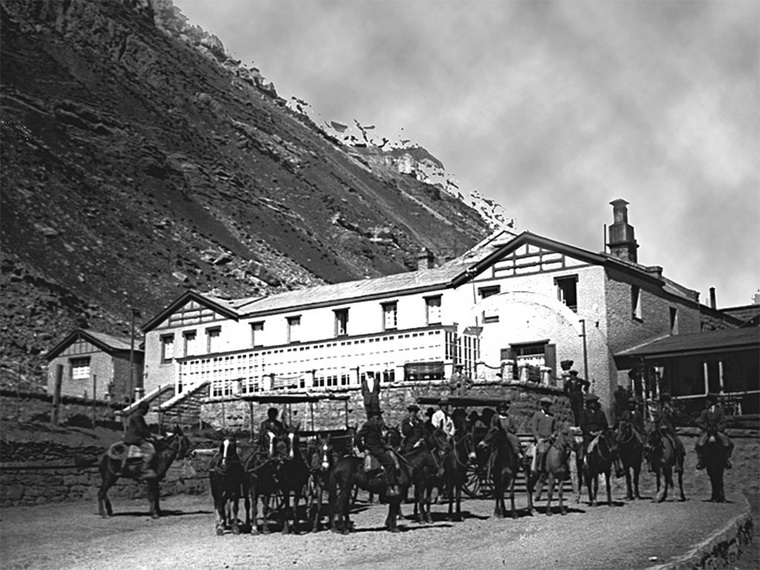 The high level of service and its own geothermal bath in each room were the hallmark of the hotel. But the hotel did not live long. In 1965 it was swept away by an avalanche. Only the small chapel remained untouched. Here it is in the picture. 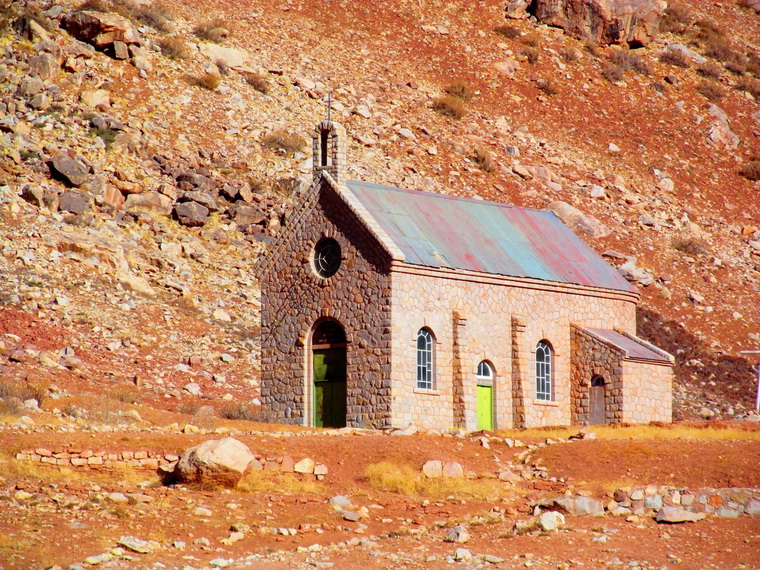 The chapel near the Inca Bridge

Almost the entire hotel was destroyed by the avalanche. In addition to the chapel, another building survived. The one you can see under the bridge.

Not far from the bridge there is a small village of the same name. The Pan-American Highway, which runs across the continent, runs through it. In the area around the bridge, this highway is called National Route 7. The bridge is located at its 175th kilometer.

In the village there is an abandoned train station, turned into a climbing museum “Museo del Andinista”. It is quite relevant because the Inca Bridge is the start of several routes for climbers who conquer the nearby Mount Aconcagua. 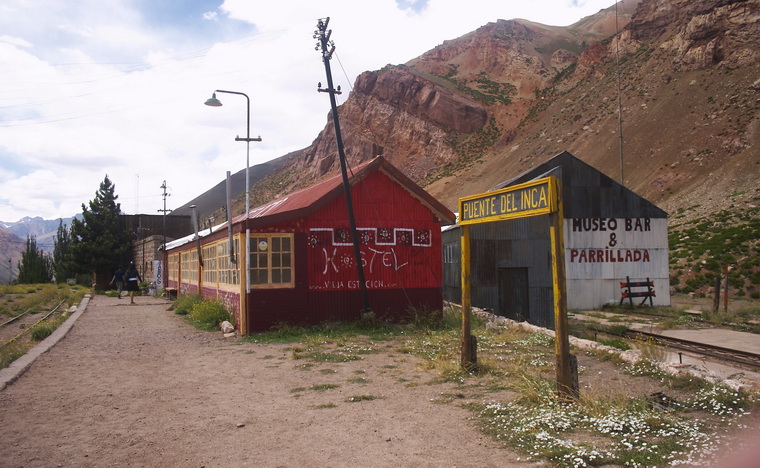 Abandoned station in the village of Puente del Inca

In ancient times the Inca Bridge was actively used as a natural river crossing, but since the beginning of the 20th century it has lost its importance because a modern bridge was built nearby across the Cuevas River (a tributary of the Mendoza River). 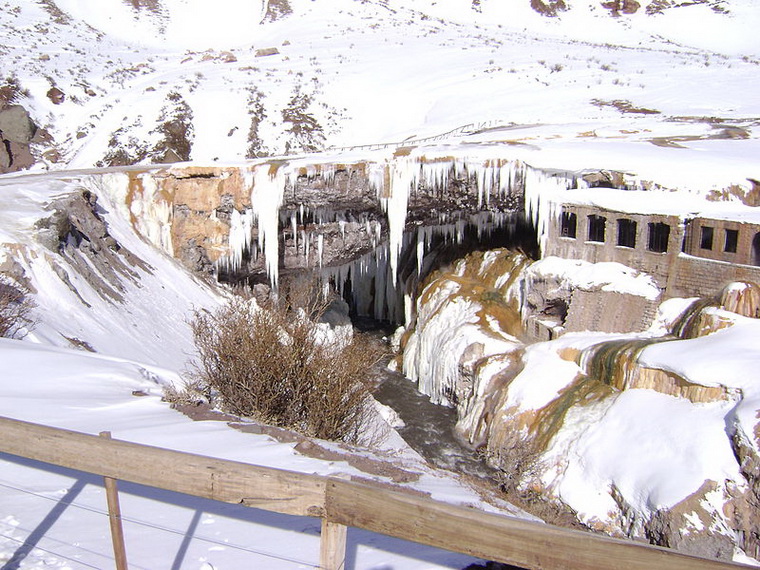 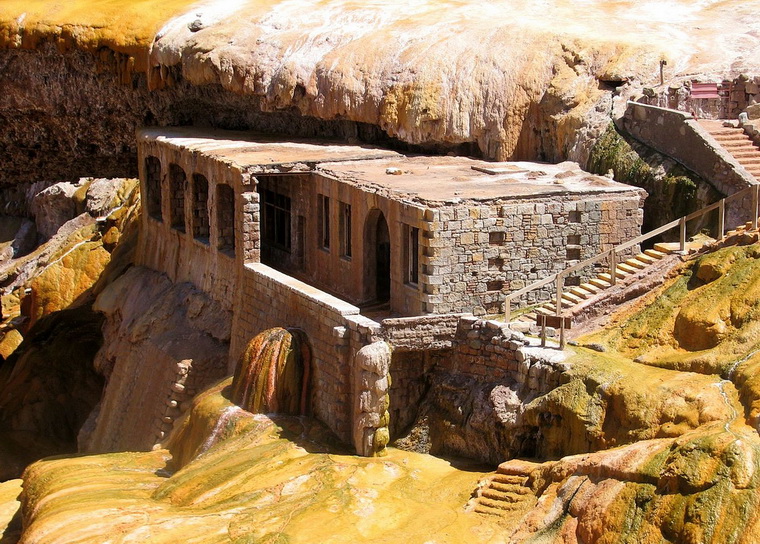 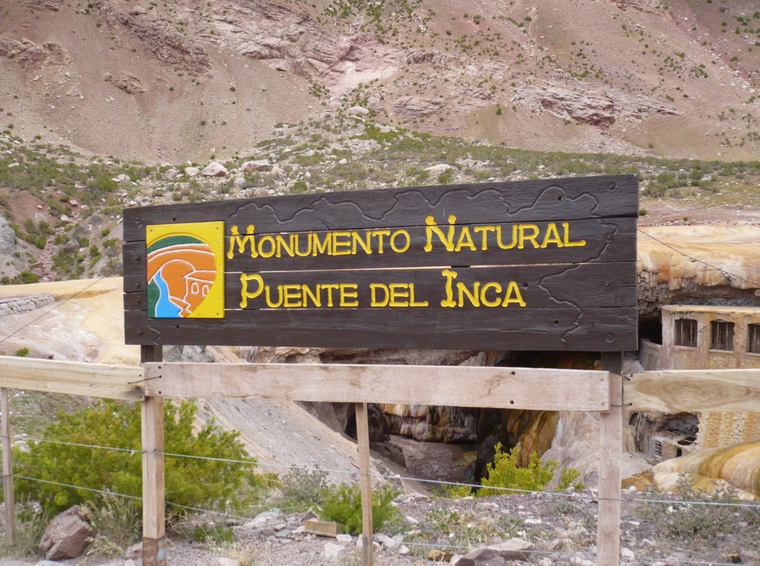 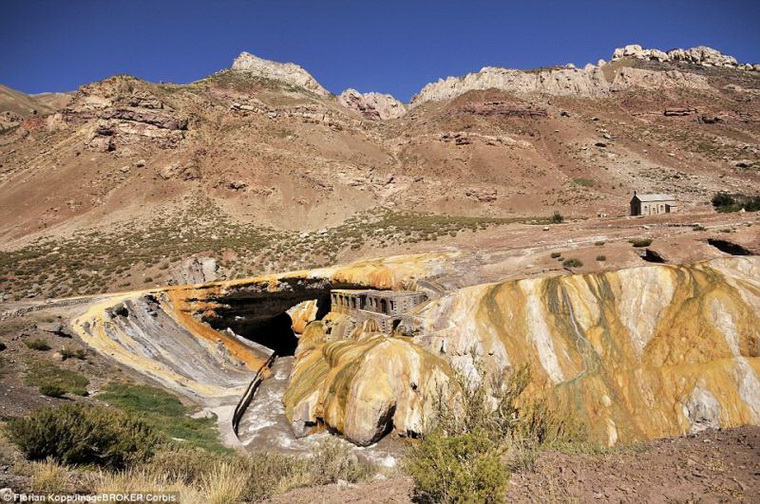 Argentina is a unique piece of the South American continent that holds many amazing and scenic, ancient and modern, natural and man-made wonders. One of them is located in the La Rioja Valley, near the city of Mendoza. It was here, above the river of the same name, there is an unusual attraction in Argentina – the uncreated stone Bridge of the Incas. This phenomenon for a long time makes you stop, look and admire the unsurpassed beauty.

Legends of the appearance of the bridge

For a long time many travelers have been trying to unravel the mystery of the natural origin of the bridge. There are several versions about the emergence of the non-handmade miracle. One legend from the times of the Quechua Indians says that the Inca Bridge was created by the almighty Sun God to save the life of the heir to the Inca throne. To cure the descendant’s paralysis, it was necessary to cross the river and let him drink water from the healing springs. A living bridge was built by the monarch’s warriors. Holding each other, they turned into stone forever, opening the way to the healing water.

A more modern version is that the Inca Bridge is thought to have appeared as a result of avalanches and rock falls. Chemical processes that occurred with the avalanche ice and snow formed the first layer over the Mendoza River. Rocks, dust, and various rock debris lay in the second layer. The water layer melted over time, and the rock deposits were deposited and gradually soaked in water from the geothermal springs. This is how the arch of a natural bridge was formed. The hot water reacted with oxygen and left colorful precipitates of salts. 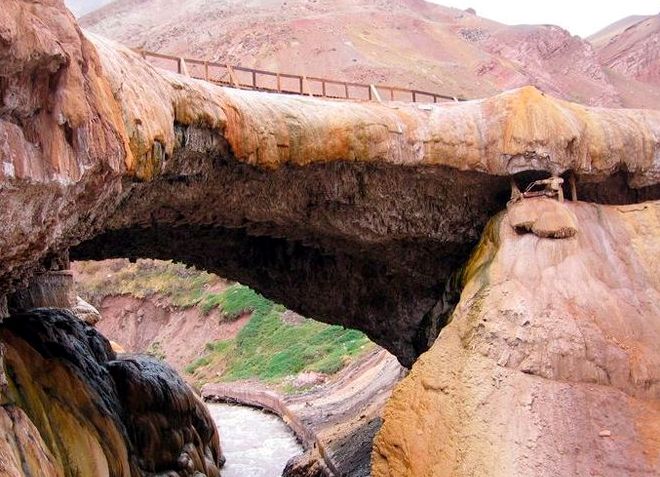 A true wonder of nature

The Inca Bridge fascinates tourists with its appearance. It consists of smooth smooth piled stones of green and yellow color, which picturesquely splash water from the thermal springs. Located at an altitude of 1719 m above sea level, the miracle bridge is 47 m long and 28 m. The thickness of the bridge mostly reaches 8 meters. The non-miraculous object is surrounded by thermal springs: Venus, Mars, Mercury, Saturn and Champagne. The local geothermal waters are believed to have healing properties. 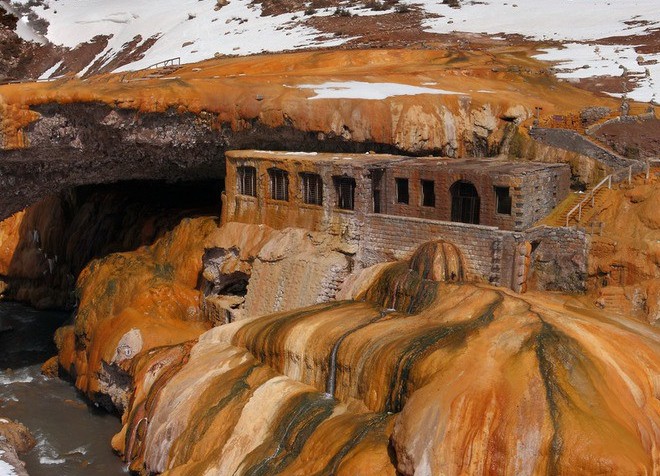 What is worth seeing?

The stone enigma of nature is located in the village of Puente Del Inca with a population of 150 people. In the early twentieth century, a health resort was built near the Bridge of the Incas, which has become very popular. Later, a resort area was formed here. An avalanche in 1986 turned the resort with all its buildings into a wasteland, leaving half-destroyed structures. The ruins give the area a mysterious and unique look. A small chapel has survived on the site of the former spa, which only extreme people will be able to see up close.

For a long time the Inca Bridge served as a crossing from one side of the gorge to the other. It lost its transport importance with the appearance in the early twentieth century of the Inca Bridge. Bridge with the railroad. The present-day Transanda Railroad passes through the village of Puente Del Inca. The station building now houses the Museo del Andinista climbing museum, where tourists can learn about the history of the Inca people, their customs and traditions, and the history of climbing Mount Aconcagua. From the bridge itself begin the routes for climbers. 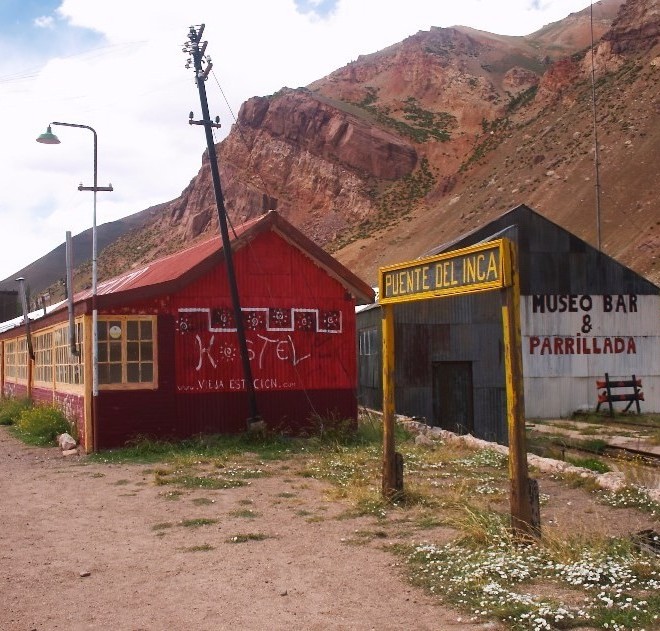 How to get to the Inca Bridge?

From the city of Mendoza towards Chile are the RP52 and RN7 highways. It takes an average of 3 hours to reach the landmark by car. Every day, except Wednesday, there is a public transport here. A one-way ticket for buses #094 and 401 costs about $5.