The British Museum in London is 13 million exhibits describing humanity from the Paleolithic period to the present. It is the second most visited on the planet, and in the UK is the most popular tourist attraction. More than 6.5 million people visit it every year. If you’re going to be one of them, check out some helpful tourist information about the exhibit, history, and how to visit.

You can see archaeological sites from around the world here. Descriptions of the British Museum include definitions of “largest” or “greatest outside the historic homeland” for most of the holdings. For example, more Egyptian antiquities can be found only in Cairo. The Middle East department is the greatest outside of Iraq. The collection of objects from the early European Middle Ages is the largest in the world.

In the British Museum, the works are exhibited in 100 galleries, formed on the basis of historical and territorial grounds. They are divided into thematic sections. The richest are the archaeological finds:

Colonial domination allowed Great Britain to form a large ethnographic collection devoted to Africa, North and South America. Of the works of art, the British Museum has 50,000 drawings and more than 2 million engravings, including graphics by Leonardo da Vinci, Raphael, Rembrandt and Dürer. Lovers of numismatics will be attracted by the extensive coin base – more than a million banknotes and medals from the 7th century BC.

Among the exhibits at the British Museum in London, there are some truly unique. The most famous are the following:

Many sightseers specifically come to Gallery 4 to see the most famous of the 110,000 Egyptian artifacts – the Rosetta Stone. This granite slab, on which is carved the same inscription in Ancient Greek and ancient Egyptian. Thanks to this finding, scientists were able to decipher ancient Egyptian writing and founded the science of Egyptology.

Even a brief description of the British Museum does not do without mentioning another masterpiece – the stucco from the Greek Parthenon, brought here in the 19th century, when Greece was under the rule of the Ottoman Empire. Of the Greek treasures also on display here:

There are disputes over these monuments between Great Britain and Greece, which demands their return to their homeland. Even at the time of their admission, not everyone thought this was right, for example, Lord Byron was opposed.

The clock display is the most significant in the world. One can trace the development of watchmaking in Europe. The most unusual exhibit is a clock in the shape of a ship, made in the 16th century in Prague.

When choosing what to see in the British Museum, don’t ignore the section devoted to Britain itself. It contains artifacts from the time of the first Celtic tribes. Unique is the only copy of the medieval epic Beowulf. You can admire the medieval details of church furnishings, jewelry, household utensils.

The museum was founded more than 250 years ago – it opened its doors to the public in 1759. The collection started with the bequest of naturalist and collector Hans Sloane, which passed 71 thousand unique items to the Crown after his death. Today a bust of the founder stands in front of the doors on the Great Russell Street side.

The history of the British Museum is linked to the period of English colonial rule. Thanks to him, treasures from all over the world were brought into the collections. Parliament organized special expeditions, which resulted in the delivery of archaeological and ethnographic material. Thus, items of natives collected in Cook’s circumnavigation of the globe were acquired. A special expedition during which cuneiform texts were discovered turned Britain into the most important center of Assyriology.

Important sources of replenishment of the holdings throughout their existence were also the purchase of private collections and generous gifts from patrons of the arts. For example, sculptures and bas-reliefs taken from Athens by Lord Elgin were purchased. A separate gallery is the gift of Baron Ferdinand de Rothschild.

The British Museum did not become a purely historical museum right away. At first, in addition to Sloane’s materials, it included two major libraries:

Natural Science objects were also represented in the holdings-they were separated into a separate museum institution in 1887 in order to increase the space for displaying historical materials. The book depository gained its independence as early as the twentieth century. – Only the reading room in the center of the courtyard remains as a reminder of it.

READ
Victoria and Albert Museum in London, photos and exhibits

Sloane’s legacy was originally housed in the Montague House mansion, which was purchased for that purpose.

Among the interesting facts about the British Museum is that it was originally considered to be placed in Buckingham Palace, but the organizers declined this option, finding it too expensive and inconveniently located.

With the rapid influx of storage units, space became scarce. Construction of a larger room on the former site began in 1823. By 1847 the work was completed and a modern building resembling an ancient Greek temple appeared.

In 1895, the Board of Trustees purchased 69 adjoining buildings to expand the exhibition space. In 1906 the construction began.

The architectural appearance of the rooms where the British Museum is located was finally formed in 2000 when a roofed courtyard with netted ceilings appeared around the circular reading hall.

The total area of the exhibition is 92,000 square meters, and to get around it all you have to walk more than 4 km.

There is no charge for all tourists. Only selected temporary exhibitions can be paid for. On regular days the entrance is open from 10 to 17-30, on Fridays the evening visiting time is increased to 20-30.

Guide services for groups must be booked in advance – for this it is necessary to write an email to groups@britishmuseum.org.

The tour service for individual tourists is provided in the format of audio guide, and an important fact about the British Museum is that it is also available in Russian. You can choose the duration of the tour from 60 minutes to a full day. The audio guide tells about 260 of the most noteworthy objects, offers a tour plan, and gives historiographical and cultural information. At the end you can send a souvenir of your trip by e-mail.

The price for the audio guide is 6 GBP, and there is a discount of 5.50 GBP for people under 19 years old, students, unemployed and elderly people aged 60 years and over.

In most of the rooms you can take photos for free, unless there is a special sign with a crossed out camera.

There are 4 souvenir stores with products for every taste and purse. Jewelry based on ancient art, replicas of museum artifacts, books, calendars, dishes, towels and, of course, magnets with images of museum items – all this can be chosen in the stores. A special selection of souvenirs is designed for children. For example, cuddly toys depicting Egyptian gods – the cat Bastet and the dog Anubis – are popular. They are on sale for 15.99 GBP.

The fridge magnets cost about 3,5€ on average.

There are 3 small cafes for visitors and a restaurant on the roof of the library. Tables at the restaurant should be booked in advance and the cafes offer a small range of snacks, salads and desserts at prices of 10-12 EUR. Two cafeterias operate in the large courtyard on the east and west sides, and a third larger café is located on the ground floor.

There are two entrances for visitors – the main one from Great Russell Street and the alternative one from Montague Place.

The best way to get there is by tube – there are four stations within a 500-800m radius, the nearest being Tottenham Court Road and Holborn.

There are also three bus stops nearby with over 20 bus routes:

There are also bicycle parking lots.

To visit England’s capital and pass by this treasure trove of world civilizations is an unforgivable oversight, especially since there is no charge for a tour. Even a quick run through it will leave you with unforgettable impressions, broaden your horizons and take colorful photos, which will get lots of likes on social networks. 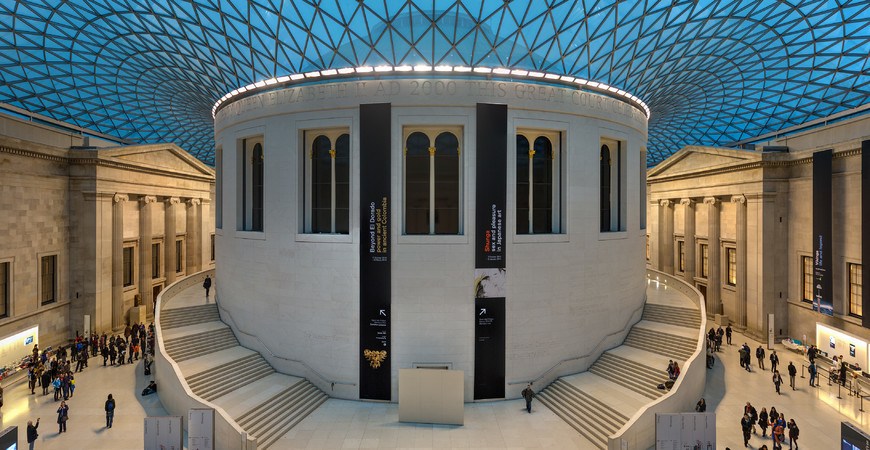 The British Museum is the largest and most popular history and art museum in Britain. Its permanent collection contains more than 8 million pieces of art, covering the history of world culture from its beginnings to the present day.

The British Museum has more than 250 years of history. It was founded in 1753 by King George II of Great Britain on the basis of the collection of the physician, naturalist and scientist Sir Hans Sloane. For visitors the museum was opened 6 years later in the mansion Montague House, on the same site stands the modern building of the British Museum.

Over the following years the museum’s collection was constantly enlarged as a result of the British Kingdom’s expansion into other countries, large-scale archaeological excavations, and the acquisition or donation of private collections.

The constantly expanding museum could not accommodate more and more objects, which led to the separation of some departments and the creation of new museums. So, on the basis of the zoological, botanical, geological and mineralogical departments, the Natural History Museum appeared in 1845. And in 1973, on the basis of the museum’s collection, the British National Library was created.

The unique collection of the British Museum is still systematically replenished with new objects: engravings, coins, drawings and medals of different epochs and civilizations.

The present British Museum building took 25 years to construct and was opened in 1847. The chief architect was Sir Robert Smerk, who conceived the project in the Neo-Greek style; the author of the pediment was Richard Westmacott.

A little later, in 1857, the Great Court was built, with the Round Reading Room in the center.

And at the end of the XX century the British Museum building underwent a new alteration designed by the famous architect Norman Foster. So a huge reticulated glass dome appeared, which became the recognizable symbol of the museum.

The British Museum in London displays less than 1% of its entire collection, which is true about 50,000 objects, located in nearly 100 galleries.

The museum’s collection is divided into 10 departments:

The most popular exposition is devoted to Egyptian art, which is rivaled only by the Cairo Egyptian Museum in the completeness of exhibits, and the halls of Ancient Rome and Ancient Greece.

READ
Museum of Arctic and Antarctic in Saint-Petersburg

Admission to the main exhibition of the British Museum in London is free for all categories of citizens, but you can leave a donation in specially equipped boxes.

The museum provides additional services. One of the most popular services is audio guide that is available in 10 languages, including Russian. The price of an audio guide for adults is £7.

There is a restaurant, two cozy cafes, and a souvenir store on the grounds of the British Museum.

The British Museum in London, located in the area of Bloomsbury, is easily accessible by public transport or by car.

The British Museum occupies a huge area and faces four streets, the main entrance is on Great Russel Street.

There are also many bus stops near the museum:

If you have a car, bear in mind that the museum is in a toll-free zone and parking spaces are extremely limited.

There are cab apps in London. The most popular are Uber, MyTaxi and Gett.

There is also bicycle parking on the Great Russell Street side .