Bryce Canyon is a national park in the United States in southern Utah, north of the Grand Canyon. The park is named after the pioneer explorer Ebeneyzer Bryce . It became a national park in 1924. Bryce Canyon is world famous for its unique geology and particularly clean and clear air. The water, ice, and limestone have created a grand museum of sculptural and architectural natural wonders. The majestic canyon amphitheater is filled with thousands of towers, spires called hoodoos, temples and minarets of reddish, pink and creamy hues. Together, these unique formations are intricately shaped, colored with many colors, and create an unprecedented, magical landscape.

As legend has it, a great Native American Spirit, saddened by the excess of evil on Earth, gathered all undeserving people here and turned them to stone. Whether the Spirit intended it or not, the spectacle was spectacular.

Bryce Canyon, situated at an altitude of 2.4-2.7 kilometers, is cool in summer and stunningly tranquil in winter under a cover of freshly fallen snow. The scenic 30-kilometer road from the Information Center snakes up to Evimpa Point, passing 13 viewpoints, where you can admire the canyons of the Colorado River for 160 kilometers around. Although driving your own car is allowed here, free, regular buses are offered for conservation purposes.

Most hikers love the Queen’s Garden, Navajo Loop, and Coo-coo Loop trails among the day hikes in the Bryce Amphitheater, where the sophistication of the rock formations is pleasing to the eye. Try to be in the park at sunset to watch the natural light show within the circus walls, when the red rocks turn reddish yellow and then dark purple.

READ
Caddo Lake is the realm of furry giants. USA

Bryce Canyon, the jewel of Red Mountain Country, will greet you with stone amphitheaters full of fantastic red arches, spires and hoodoos.

Pedestal Rocks , or Hoodoos (as they are commonly called) are mysterious figures of soft clay and sandy rock, protected from erosion by stone hats. Hoodoos tend to live in pits washed out and weathered over thousands of years, live in groups, and are always of considerable photographic interest. The best time to photograph them is at sunrise or sunset, when the low rays of the sun add contrast to the landscape and change the hues of the rocks in amazing ways. Rome Rock Hoodoos is one such fungus. Sent to the canyon in 1870 by the U.S. government, explorer Clarence Dutton rightly called Bryce Canyon the most remarkable phenomenon man can see on planet Earth, the tune “Old turkey buzzard” from the unforgettable western “McKenna’s Gold” will willy-nilly accompany you all the way.

The first point to visit was Sunset Point. From here you have a wonderful view of the amphitheater, Molot Torah, and Wall Street Gorge. From there you can not only see Bryce from above, but also go down and walk among the enchanting hoodoos.

The Navajo trail is ideal for this and connects with the Queen’s Garden trail. It’s best to start on the Navajo, as it’s steeper, and climb up the Queen’s Garden gently sloping trail on the way back. The hike takes about three hours (1.8 kilometers).

The Navajo Trail takes a steep incline right away and snakes you down 158 feet straight into Wall Street Gorge. The high walls make you feel tiny and lost.

Yes, be sure to wear special boots before you hike; ankle sprains are the most common injury on this trail.

Once out of the gorge, you find yourself at the bottom of Bryce Canyon, where you can admire its walls from below. You’ll have a feeling similar to those you get in a Russian spring forest, when even the air rings with purity. The road will take you to the Royal Garden Trail. The first thing that catches your eye is a huge piece of rock that looks like the sails of a ship. It is aptly named: “Sinking ship” . Many groups of Hudu have names related to the sea: Aquarius plateau, Boat mesa, Water canyon, Aqua canyon, Piracy point and so on.

Such a transparent hint that all the unusual shapes are carved by water. Another common use of the word “castle” in the name. For example, Gulliver’s Castle really looks like a huge impregnable fortress, as if surrounded by a powerful palisade. The Queen’s Castle has a more elegant and graceful architecture. Stone vases surround it, while Queen Victoria, the castle’s mistress, waits in her garden for weary travellers.

This dead-end section leads to a small picnic meadow, which you can put to good use or just sit back and relax. Be sure to take advantage of this opportunity, as it won’t be an easy climb up. But you’ll be rewarded with some spectacular views and, on a clear day, you can even see the Grand Canyon about 160 miles to the south.

The top point of the Kings Garden Trail is Sunrise Point . It’s only a half mile up the ridge of the canyon to Sunset Point, where you parked your car and started your hike. I can’t say both trails are too challenging, but the climb up takes strength.

Inspiration point is recommended as the next point to visit, overlooking Silent city. Indeed, the numerous hoodoos below seem to have made up the quarters of an abandoned city. The place has amazing acoustics. The voices of the birds that periodically fly into Silent City are carried very far and accompanied by a lingering echo.

Bryce Canyon is a national park in Utah. USA

Unique in its beauty and enchanting in its pristine nature the place is situated in the southern part of Utah (USA). It is Bryce Canyon National Park, a famous landmark in the United States.

A combination of interesting natural formations fills the park and makes it so unique. Fanciful piles of colored columns and amazing mazes created by nature are the signature features of Bryce Canyon. 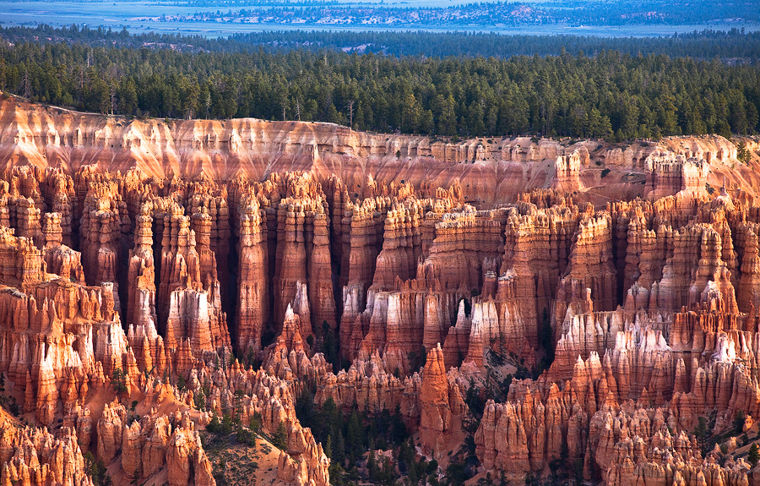 Bryce Canyon on the map