East of the Mississippi River in southern Illinois are the ruins of an American Indian village called the Cahokia Mounds. In the period from 1000 to 1200 B.C. it was a large city of 16 square kilometers. The inhabitants of Cahokia built many public buildings of all kinds, mounds, and even the Woodhenge Astronomical Observatory. Over the entire landscape of the city center in those days, as now, dominated the Mound of the Monks, whose terraces were located at a height of about 30 meters. According to archaeologists, the Cahokia Mounds were the center of the greatest civilization that passed between the deserts of Mexico and the North American Arctic, and it was here that the first city of North America was built. The site is now an Illinois State Historic Landmark, a National Historic Landmark, and a UNESCO World Heritage Site. However, until recently, only the locals knew about them. 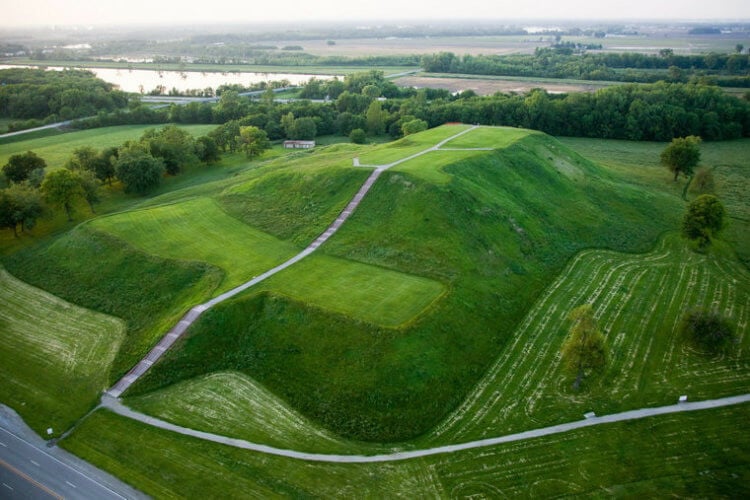 The first person to write a detailed account of the Cahokia Mounds was Henry M. Brackenridge, a lawyer and amateur historian, who stumbled upon the site and its massive central hill in 1811. As he wrote, the ruins are as astonishing as contemplating the Egyptian pyramids.

In those days, however, it was believed that the Indians were savages, incapable of properly managing the land or building anything on it. Evidence of the existence of a prehistoric city that was even larger than Washington at the time went against this notion.

Nineteenth-century historians speculated that the mounds were built by Phoenicians, Vikings, or even the lost tribe of Israel, but not by Native Americans.

U.S. universities paid little attention to Cahokia and other local sites until the second half of the 20th century. They preferred to send archaeologists to Greece, Mexico, and Egypt, where stories of ancient civilizations were quite distant and romantic. 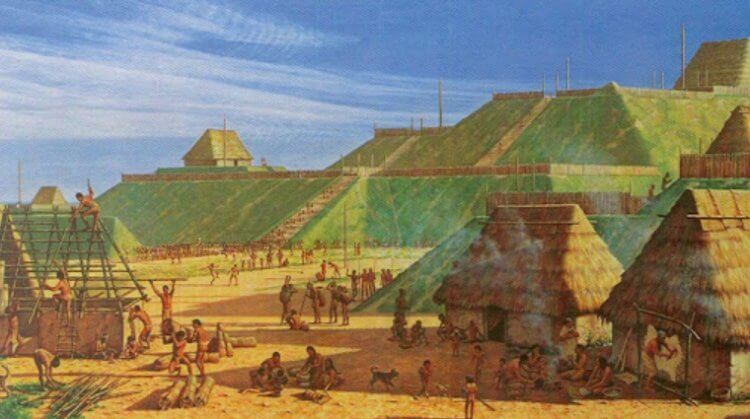 How Piles of Earth Became an Ancient Indian City

In 1925 the Monks’ Mound, named after the French monks who had once lived at its foot, was turned into a small state park. It was used for sledding and camping. The rest of Cahokia was largely ignored. The situation changed thanks to President Dwight Eisenhower’s Interstate Highway Program. It had a provision for the study of archaeological sites in the way of road construction. This meant good funding for excavations.

Subscribe to our Yandex.Zen-channel, where we have even more interesting information for you

In the process of research, it became clear that the mounds were not just mounds of soil. Almost everywhere the archaeologists worked, there were houses and other structures. Everything indicated that once lived here thousands of people. And all the houses were built in a very short period of time.

Studies have shown that the entire city, came to life practically overnight. People flocked from the surrounding area, building houses and the infrastructure of the new city. Several mounds represented a huge area, equal in size to 45 soccer fields. It was used for public festivals and sporting events. 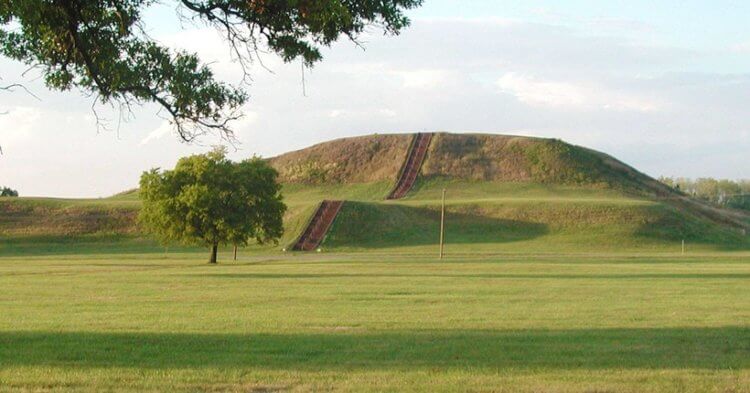 The largest site is the Monahov Mound, which is half a hectare in size. It offers a view of the surrounding land. As some scholars have suggested, a chief or high priest may have had a bird’s-eye view of the territory under his rule. This scenario suggests that Cahokia had a single leader. True, not everyone adheres to this view.

It must be said that the name of this city remains unknown. The modern name “Cahokia” is borrowed from a tribe that lived in the 1600s. Despite the many disagreements among Cahokia scholars, there are points of general consensus. Experts generally agree that the city quickly began to develop a couple of centuries after corn became part of the local diet. The town outshines other Mississippi villages in size and scope. 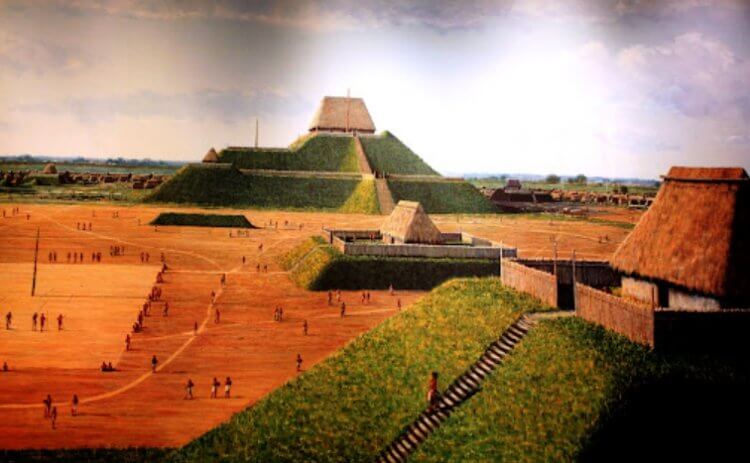 Indians who lived in the Cahokia Mounds area farmed

The history of Mississippi Indians remains a mystery

The mounds of Cahokia and the people who lived there belonged to what is now called the “Mississippi culture.” Although Cahokia is the largest settlement found to date, archaeologists have also found remnants of Mississippi settlements in the southeast, the Midwest, and north in the Great Lakes region. Like Cahokia, many have giant earth ramparts, wooden palisades and forts, as well as artifacts made of copper, shells, and stone.

Scientists cannot yet say when or where Mississippi cultures originated. Many experts put it down to the year 800 AD. Around this time, villages began to form along the central Mississippi River valley. Local farmers began to grow corn, which became a staple food, and beans. Similar settlements appeared in other river valleys in the Southeast and Midwest. In the fertile lands of North America, Mississippians for the most part enjoyed a mild climate, abundant water, and abundant natural resources, including timber, nuts, fish, and game. Recall that scientists believe that the first people came to the Americas from Siberia about 23,000 years ago. 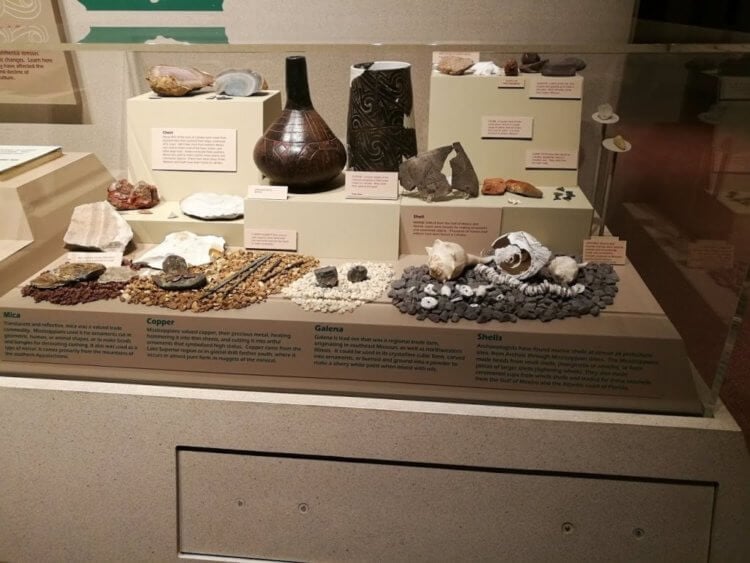 Artifacts found in Cahokia and other areas of Mississippi demonstrate the existence of large trading networks between various villages across North America. Mound 34 at this site turned out to be the only Native American copper smelter. Copper was brought to Cahokia from the Great Lakes region.

According to some accounts, at its peak Cahokia had about 15,000 inhabitants. By 1400, however, the city was deserted. The demise of Cahokia is even more of a mystery than its appearance. By the 1400s the village was abandoned. Historians note that the town gained prominence during a particularly favorable climatic phase and began to decline as the climate began to become cooler, drier, and less predictable. For an agricultural community dependent on regular yields, the changing conditions could have been disastrous. As a final note, large settlements flourished not only in North America but also in South America, the ruins of which scientists are discovering to this day.

Cahokia – the mounds of the ancient city of North America

The city of Cahokia existed a thousand years before Columbus came to the shores of America. Within just 50 years of its founding, it became the largest city ever built north of Mexico.

Cahokia reached its peak of prosperity between the 10th and 12th centuries AD. At that time the city covered an area of 16 km2 . It surpassed many European cities in size, even such large ones as London.

Cahokia had a population of up to 20,000 people. And if you take into account the small villages surrounding the city the number of inhabitants could be around 40,000.

A distinctive feature of the ancient city was a large number of earth mounds – mounds. Originally there were at least 120 of them, but less than 80 have survived to this day. 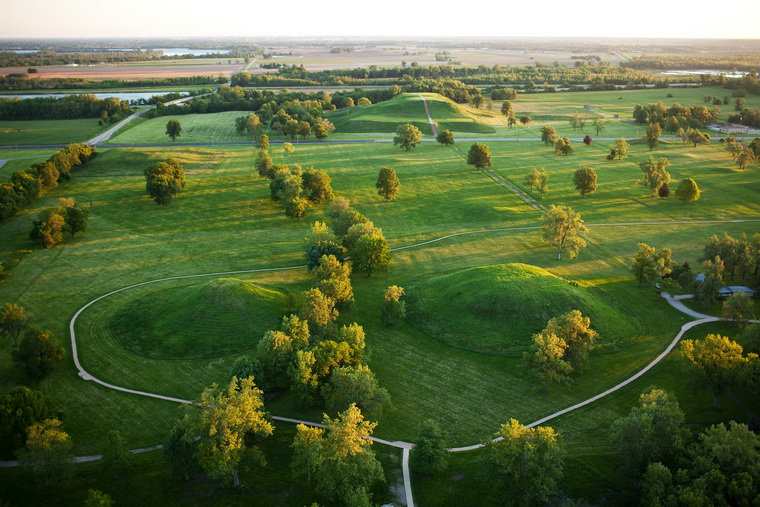 The mounds of Cahokia are located 15 kilometers northeast of present-day St. Louis between the towns of Fairmont City and State Park Place, in the center of the eastern United States. Notably, the city of St. Louis is located in Missouri and Cahokia lies in Illinois. They are separated by the great Mississippi River, which is the natural boundary between the states. Though one might think of them all as suburbs of St. Louis.

A brief glimpse into the history of Cahokia

According to scholars, Cahokia was founded around 600 A.D. by a band of Native American Indians who occupied much of the modern United States, from the Mississippi River to the shores of the Atlantic. These tribes had no written language, so we do not know for certain what they called themselves or their city.

The name Cahokia did not appear until the 17th century. French explorers began to name the mounds after the local Cahokia Indian tribe (cahokia) who lived in the area.

The structure of the city

Archaeological evidence suggests that the city was laid out around a vast urban center with clearly defined zones for administrative and ceremonial functions, elite and ordinary residential quarters and even suburbs, all with the same orientation along the main east-west and north-south axes. Around it were farmlands where the inhabitants grew corn, beans, and pumpkins. Cahokia was an important center for tribes belonging to the so-called Mississippian culture. Their settlements were located in the Midwest. 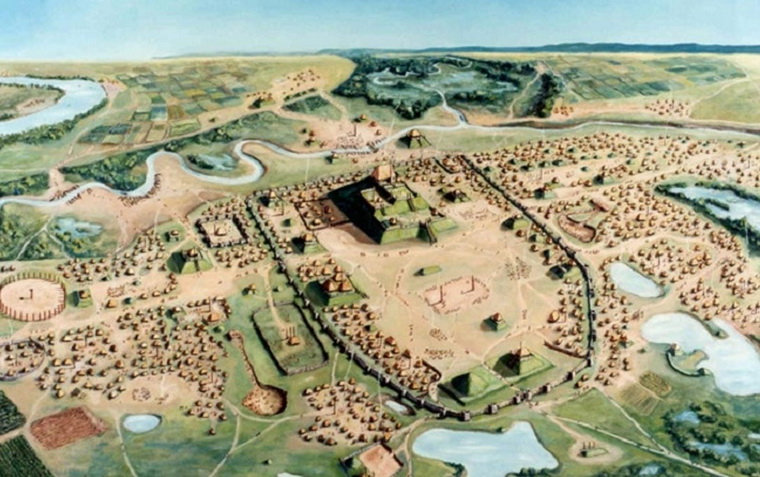 Cahokia lay in a strategically advantageous location near the confluence of the Mississippi, Missouri, and Illinois rivers. The city maintained trade ties with other communities as far north as the Great Lakes and the Gulf Coast to the south.

It is worth noting that money was not used in those days. There was mainly an active exchange of goods, i.e., barter.

Reasons for the oblivion of the ancient city

How and why Cahokia was abandoned remains one of the great mysteries of North America. The city reached its peak of development around 1100, after which the population began to decline and finally disappeared altogether by 1350.

There is no exact data on the causes of Cahokia’s withering. It may have been environmental degradation, climate change, disease, or war.

Many archaeologists agree that floods were the main cause of Cahokia’s oblivion. In 2015, soils several kilometers north of Cahokia were analyzed. It found evidence of at least two major floods between 1100 and 1400, corresponding to the period when Cahokia’s population began to decline.

Presumably the water level in the Mississippi River rose by 10 meters, causing fields to be flooded and crops to die. This in turn created food shortages. Eventually, Cahokians migrated and mingled with other Indian tribes.

The most notable feature of Cahokia is its earth mounds, the largest of which is the Monk’s Mound, which is about 30 meters high. 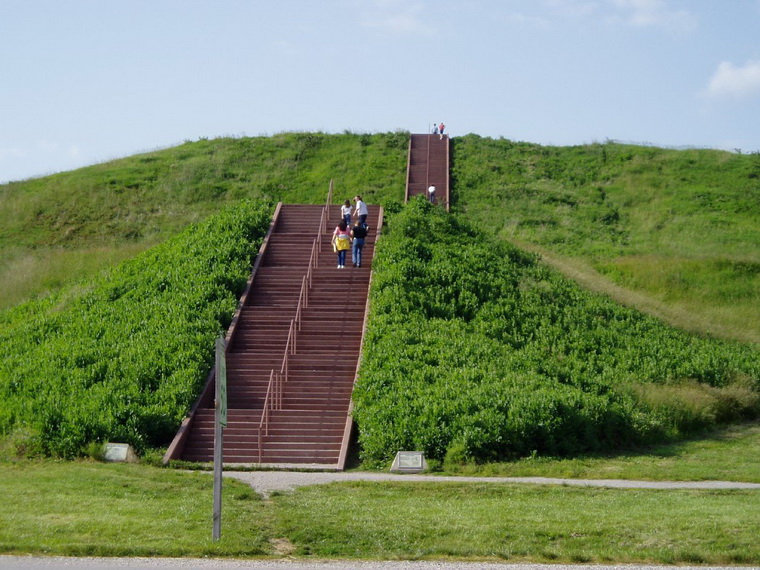 This mound is thought to have been the seat of Cahokia, and was originally topped by a building of about 460 m 2 and possibly reaching 15 meters in height.

Thousands of workers over several decades created the huge mound by hand. Archaeologists estimate that more than 1,600,000 m 3 of earth was dug up and moved.

The Monk’s Mound alone consists of 622,000 m 3 of earth. The original name of this mound is unknown, but it is now so named after the community of Trappist monks who lived here for a time after Europeans settled in the area.

The other mounds were simply numbered 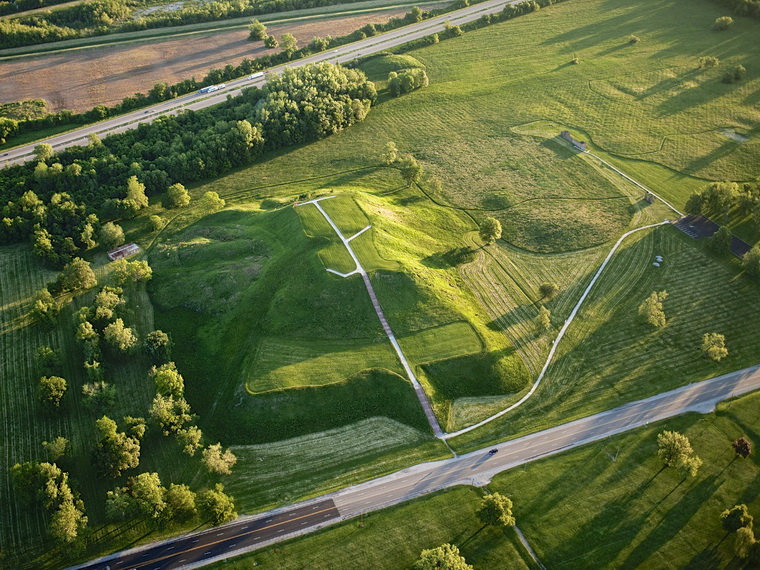 During the excavation of Mound 72, archaeologists discovered the remains of a man in his 40s who was probably an important ruler of Cahokia. He was buried on a bed inlaid with more than 20,000 beads of sea shells arranged in the shape of a falcon.

The falcon warrior or “bird” is a common motif in Mississippi culture. This burial site was clearly of great significance. In addition, finely worked arrowheads in a variety of styles and materials were found in this man’s grave. They were divided into four types, each from a different geographic region. This demonstrated Cahokia’s extensive trade connections in North America.

Archaeologists have recovered more than 250 other skeletons from this mound. They believe that more than 60% of them were victims of religious sacrifice.

An excavation near Mound 34 from 2002 to 2010 uncovered a copper workshop. This unique find was originally discovered in the 1950s by archaeologist Gregory Perino. It is the only known copper workshop to be found in the Mississippian culture. Analysis of the copper found during the excavation showed that it had been processed by repeated heating and cooling. This is roughly how iron was processed in blacksmiths.