10 Facts about Sumidero Canyon in Mexico

Cañón del Sumidero, located in the Mexican state of Chiapas, is perhaps the most famous, most colorful and most visited of all the canyons in Mexico. What’s more, it’s also easily accessible. Here are 10 basic suggested 10 facts about this amazing creation of nature.

1. The canyon is located in four state municipalities at once: Nuevo Usumacinta, Chiapa de Corzo, San Fernando and Tuxtla Gutiérrez, and the distance to the canyon from the state capital, Tuxtla Gutiérrez, is only five kilometers.

2. The canyon was formed about 70 million years ago, which is about the same time as the Grand Canyon in Arizona. It was then twice as long and deeper than the present one. Fifteen million years ago, the waters of the sea receded and the canyon became part of the land. This is how the Grijalva River was formed, flowing along the bottom of a tectonic fault, the walls of which are Upper Mesozoic limestone in which fossils of sea creatures are clearly visible. The river has a sharp bend of about 90 degrees in the narrowest and most picturesque place 13 km long.

And in total the Grihalva River has 32 rapids, on its banks five waterfalls flow out of the walls, and two freshwater streams flow into it. There are three major river beaches along the river.

3. There are five lookouts in Canyon Sumidero National Park, each with a different name: La Ceiba, La Coyota, El Roblar, El Tepehuaje, and Los Chiapa. The distance between the outermost of them is 17 km. The highest of them is El Roblar, from a height of 1200 meters you can perfectly see the bottom of the canyon and the bend of the river. The national park also has two mountain bike trails. Admission to the national park costs 35 pesos and the ticket is valid for two days.

READ
Haiku stairs on the island of Oahu. Hawaii

4. Until 1960, the canyon was practically unexplored. Then it was in an impenetrable jungle, with no vehicle access. In 1895, three Frenchmen attempted to explore the canyon, but drowned in the river. In 1932 the same fate befell an American. This gave rise to legends of witchcraft in these parts, as well as of the ferocity of the river crocodiles. The river, with its 30-meter waterfalls, was the only way into the canyon. In 1960 the explorers, accompanied by soldiers of the Mexican army, did so: they sailed the Cacahuaré River to the town of Chiapa de Corso, then entered the canyon and landed at what is now the Usumacinta River Beach.

5. The fauna and flora of the National Park are protected by the state. Several of the animal species found here are threatened with extinction. During a boat tour you can see spider monkeys, crocodiles (the largest in Mesoamerica), Central American tortoises, ocelots, green parrots, brown pelicans and even anteaters.

6. In 1974-1980 the Manuel Moreno Torres hydroelectric power plant was built in the canyon, whose cascade is one of the highest in the world. It provides 30% of the electricity consumed by the central regions of Mexico. After its construction, part of the canyon was flooded, which, however, allowed to increase the length of the riverbed to 32 km. Boats with tourists now sail up to the power plant dam. At the point where the dam is located, four rivers converge to form a new river, the Osumacinta.

7. Rock paintings have been found on the canyon walls. The most famous of them is Nido del Águila. There is also an archaeological area, Ruinas de Berlín, where there is a ball field and an ancient temple. It is believed that they were built by the ancient inhabitants of Chiapa, warriors who came here from Nicaragua or even Paraguay. According to legend, they threw themselves down from the rocks of the canyon to avoid being conquered by the Spaniards in 1535.

Ruinas de Berlín are named after the German explorer Heinrich Berlin, who visited the area in 1946 and named it “Sumidero.

8. Only five local cooperatives are authorized to provide tourist services in the canyon. Boats with tourists can make a route of 64 km. During the tour you can see numerous caves in the rocks. The most famous cave – “Cave of Flowers” – got its name because of the reflections of magnesium, potassium and other minerals on its walls, which have pink hues. Inside is an image of the Virgin of Guadalupe, usually surrounded by flowers and burning candles left by visitors. Bizarre natural formations on the canyon walls also leave a lasting impression, such as the “Christmas Tree” with a waterfall. “The branches” of the Christmas tree are sediments of the waterfall covered in moss. During the rainy season, when the waterfall is active, the falling water and light change the color of the “branches” to emerald. The cost of the tour is 180 to 250 pesos per person.

9. Sumidero Canyon is an important ecosystem. The dense vegetation cover of the banks, consisting mainly of rainforest, pine and oak mixed forests, absorbs carbon dioxide and produces oxygen. The climate here is always stable, with no drastic fluctuations in temperature. The average annual temperature in the canyon is 26C.

10. 10. The canyon expands about 2 centimeters a year. This geological process, going on for millions of years, has not yet stopped. The average depth of the canyon is 250 meters, and most of the walls are 200-700 meters high. The maximum width of the canyon is 2 kilometers. The highest point is 1200 meters, where El Roblar is located.

Canyon Sumidero – 30 km in search of the crocodile. Mexico

If there is a beautiful canyon in the country, it is likely to be made into a landmark or a National Park. Or both at the same time. That’s exactly what happened with the Sumidero Canyon in southern Mexico. 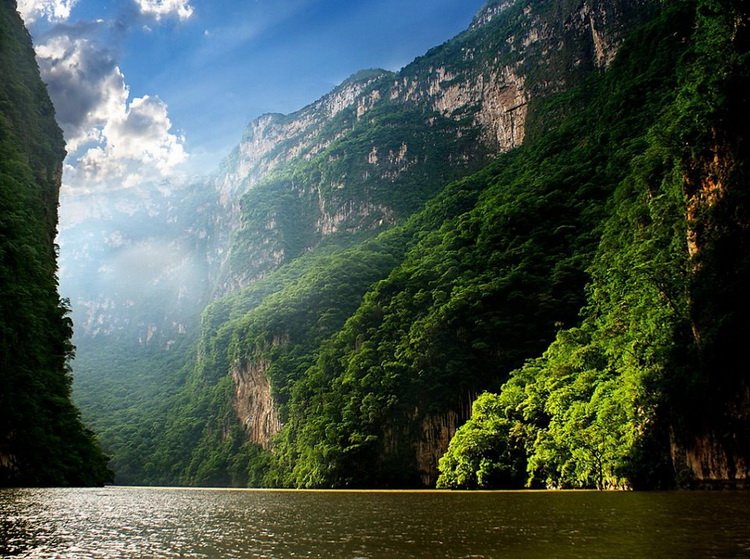 It is located near the towns of Tustla Gutiérrez and Chiapa de Corso in Chiapas (sometimes pronounced Chiapas).

Sumidero Canyon on a map

The canyon is a classic combination of mountains and the Grijalva River, which has cut through them for countless years. According to scientists, the formation of Sumidero Canyon began about 35 million years ago. The length of the canyon is just over 30 km. The height of the surrounding mountains is 200 to 700 meters, but there are also mountains up to 1000 meters high. 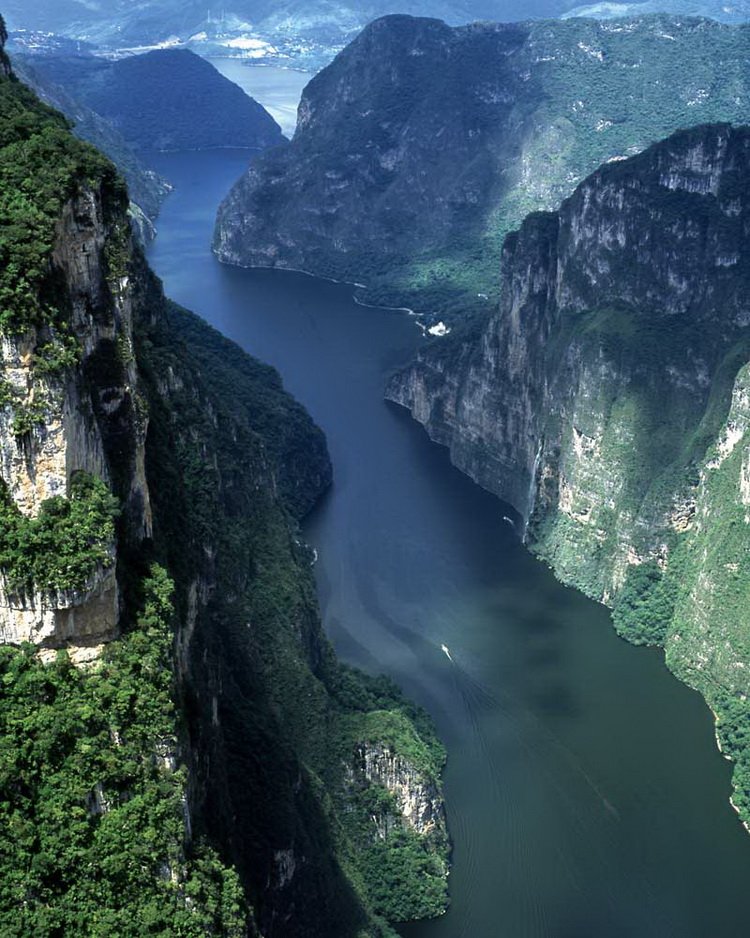 In 1972, Sumidero Canyon and the surrounding area of about 21 hectares has been declared a national park with the same name. Most of the territory is occupied by forests. Here you can meet monkeys, vultures, jaguars and other representatives of wildlife. On the banks of the canyon itself you can see crocodiles (locals call them cocodrilos).

Sumidero Canyon is one of the most visited attractions in southern Mexico. There are two ways to see the canyon.

The first is from above, with the help of viewing platforms called miradores (original miradores). There are a total of six viewing platforms. They are located in places with the best views. Views of the surrounding countryside are no worse than the famous observation deck “Five Fingers” in Austria. True, there is one significant disadvantage – because of the long length of the canyon, to move from one site to another on foot is quite difficult. A rental car will help.

The second way is to see the canyon from the inside by buying a tour by boat. Honestly, this is the best option for exploring the canyon. Excursions here are put on stream. From the pier in Chiapa de Corso periodically boats with tourists go. The cost is about $13 per person. Deeper into the Canyon, you will be taken under the Belisario Dominguez Bridge and up to the Chicoasen Dam. Throughout the trip you will have time to see the canyon in all its glory. 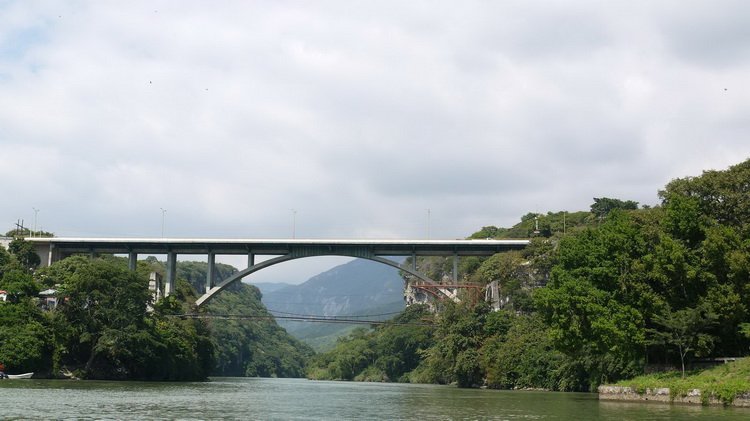 The canyon itself has its own attractions in its arsenal (you will definitely be shown them). It is a chapel depicting St. Mary of Guadalupe in a small cave. The word built is probably inappropriate here. Let’s just say they equipped it in honor of the scientist who founded this National Park. 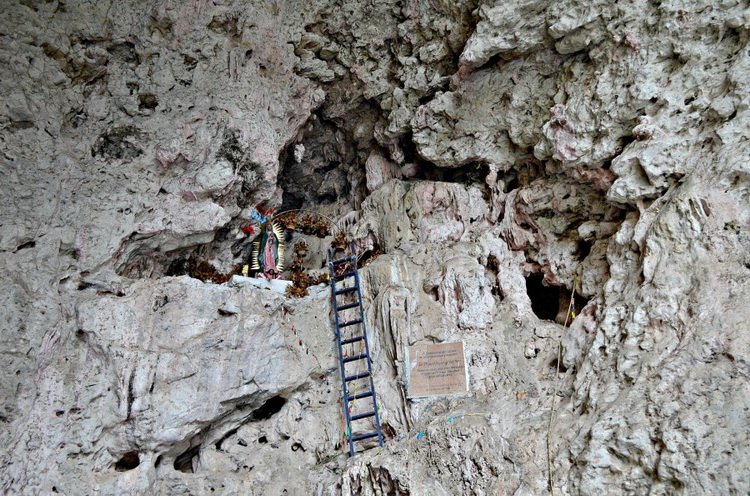 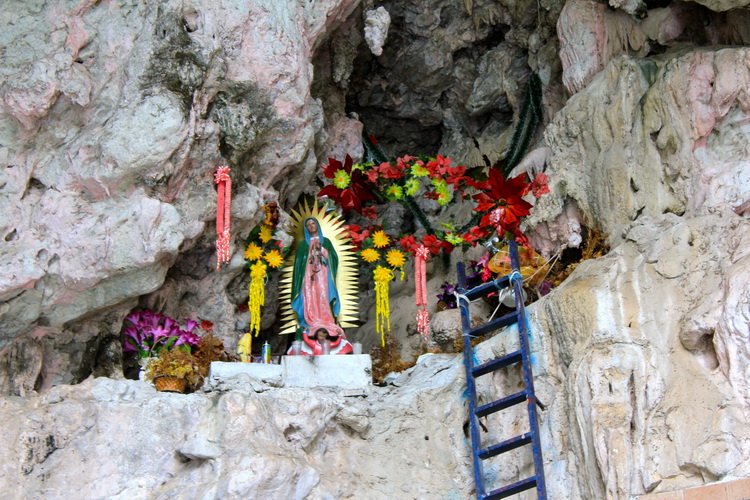 A little further away from the chapel there is an unusual natural formation – the waterfall New Year’s Tree. Streams of water flow through the green and very fluffy moss, which is shaped exactly like a Christmas tree. 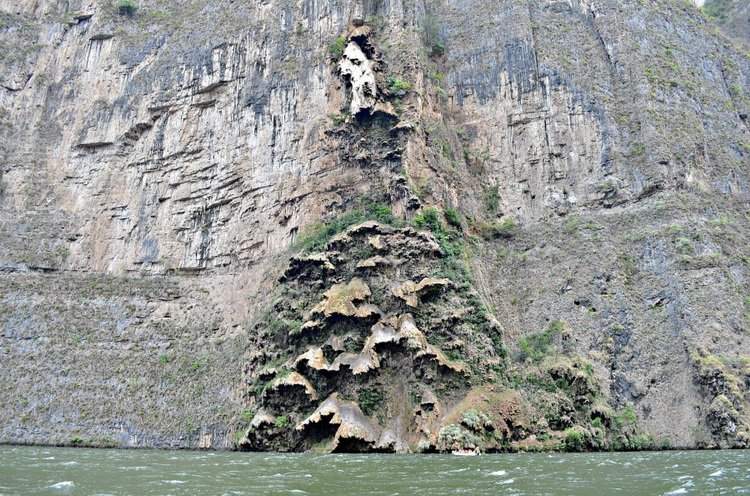 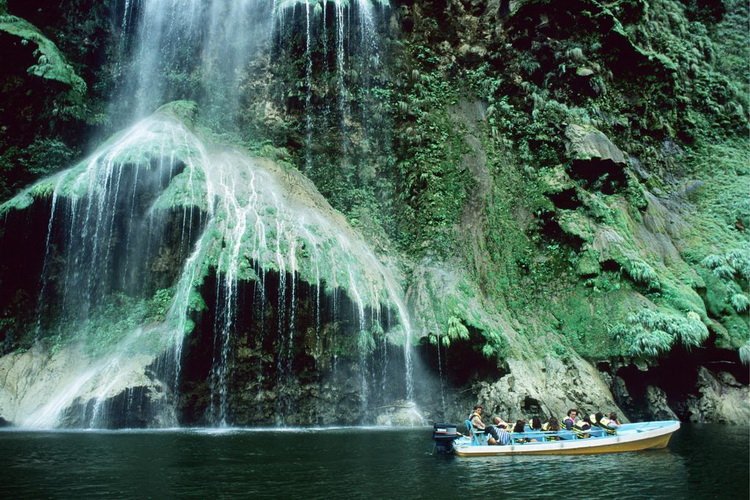 In addition, if you are lucky, you can meet crocodiles on the banks of the canyon and in the river Grihalva, and on the trees cheerful monkeys. But, unfortunately (or maybe fortunately) you can see neither of them. A sign at the departure point warns about the presence of crocodiles in the canyon, but tourists do not always manage to see them. 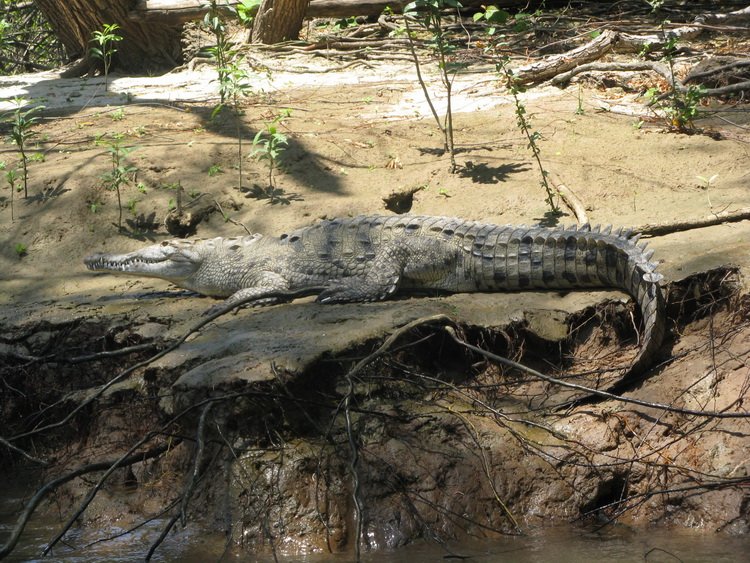 The route ends at Chicoasen Dam. In fact, it was only thanks to the dam that boat trips became possible. Previously, it was impossible to navigate the river in this area.