On September 8, 1898, the Exarch of the Bulgarian Orthodox Church, Joseph I, together with the metropolitans of the Principality of Bulgaria, consecrated the Bulgarian Iron Church of St. Stephen in Constantinople.

The St. Stefan Church (Aya Stefan, Bulgar Kilisesi), also known as the Iron Church, is an Orthodox Bulgarian church in Istanbul built of prefabricated iron (cast-iron) elements. It is the only iron orthodox church in the world. The building is a three-nave basilica with a cruciform shape. Its altar is turned to the Gulf of Golden Horn, and over the narthex built a bell tower 40 meters high. The temple was built at the end of the XIX century and cost the Bulgarian state more than one million francs.

In 1849 the influential Ottoman statesman of Bulgarian origin, Prince Stefan Bogoridi gifted the Bulgarian community in Constantinople for the church needs a large plot of land in the quarter Fener, between Balata and Fener on the very bank of the Golden Horn, near the residence of the Ecumenical Patriarch. There were three buildings on the plot – one wooden and two stone. 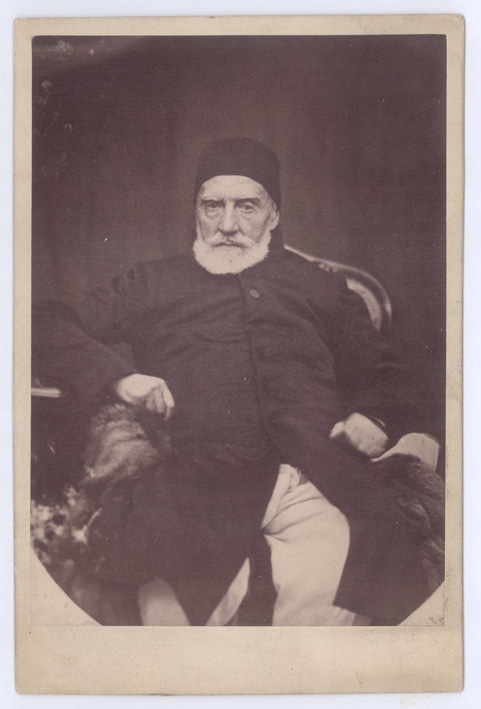 On October 17, 1849 an official Sultan firman was issued allowing the Bulgarians in Constantinople to have their own prayer house. The lower floor of the wooden building donated by Bogoridi was converted into a temporary paraklis (chapel) and solemnly consecrated on October 9, 1849. Later the paraklis became an independent church, known as the Wooden Church, dedicated to the first martyr Stephen in honor of Stephan Bogoridi. 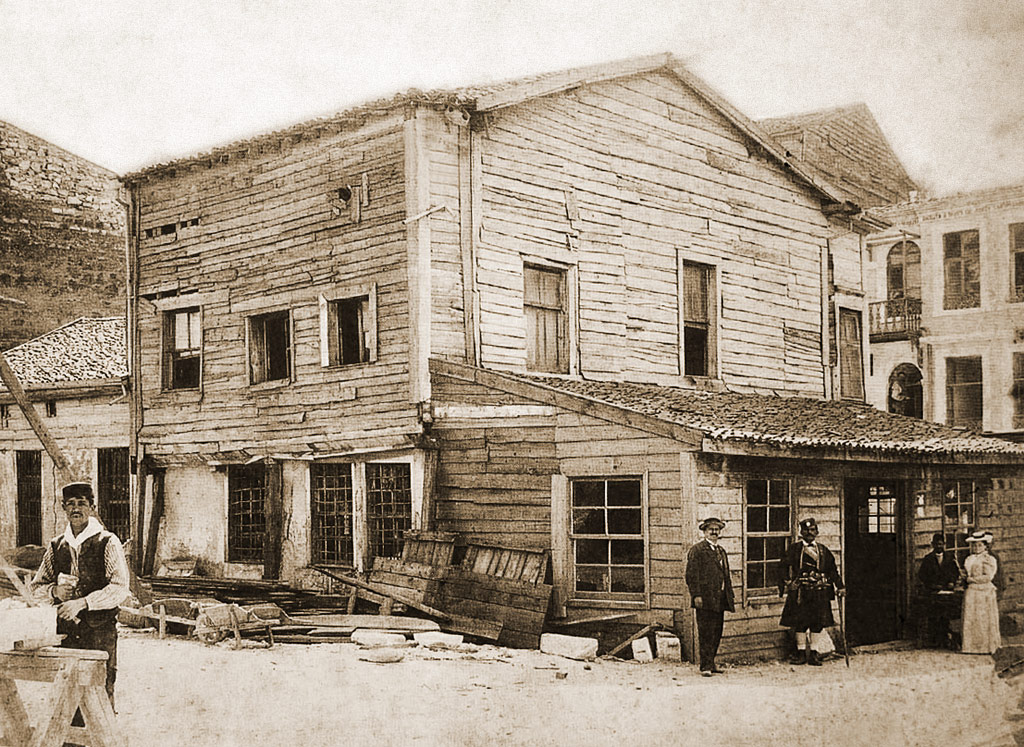 On October 25, 1859, Prince Nikola Bogoridi (son of Stefan) laid the first (main) stone of the new church. It was an extremely symbolic act, the real construction began only 33 years later.

In 1850 the stone buildings in the courtyard were demolished and their material was used to build a three-story building with 25 rooms, known as Metoha, which later became the seat of the Bulgarian Exarchate.

READ
Bangkok sights. What to see in Bangkok.

In the wooden church, the first Bulgarian exarch Anfim May 11, 1872, on the feast day of St. Methodius and Cyril, despite the ban on the Patriarchate, celebrated a liturgy, during which was solemnly read the act of proclamation of the autocephalous Bulgarian Church. After the original wooden building was damaged by fire, it was decided to build a larger building on the same site.

On June 25, 1890 the Sultan’s firmament was authorized to build a new temple on the site of the wooden church. The author of the project was Hovsep Aznavour, an Ottoman architect of Armenian origin. On April 27, 1892 Exarch of the Bulgarian Orthodox Church Joseph I also laid the foundation stone of the new church.

Because of the instability of the ground at the site, the architect proposed to build the church from prefabricated iron constructions, without a concrete foundation. The Viennese firm of Rudolf Philipp Wagner won the competition to produce the iron elements of the church, despite the fact that it had never built iron churches before. But Wagner had a great reputation in the field of metalwork – at the Vienna Exhibition of 1873 the company presented its products in a huge pavilion of glass and metal.

Manufacturer’s mark on one of the structures

The structures, weighing 500 tons, were made in Vienna in 1893-1895 and delivered by rail to Trieste and from there by steamer to Constantinople. The skeleton of the church was made of steel and the walls were of wrought iron. The elements were fastened to the base with bolts, nuts, and rivets-about 4 million in all. Assembly of the building was completed on July 14, 1896. 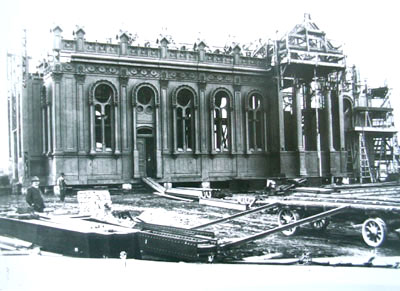 Assembly of the church 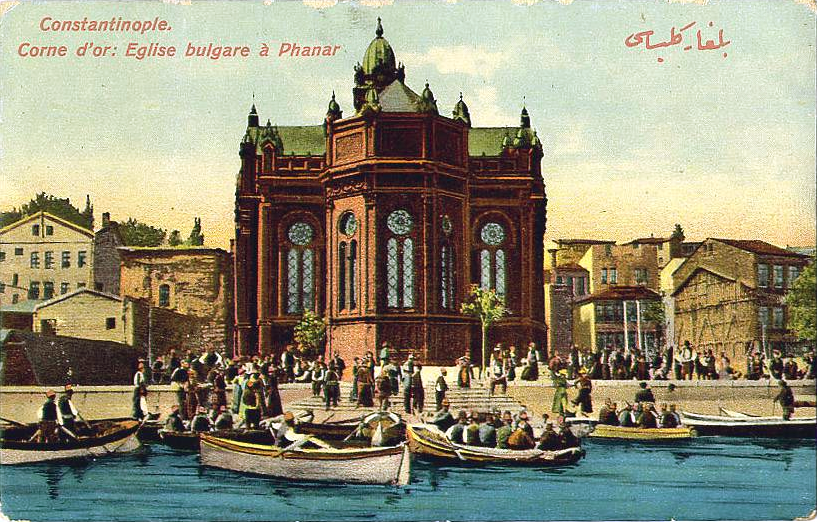 Architecturally, the church combines elements of Neo-Baroque, Neo-Gothic and Byzantine style. The interior was also made in Vienna. The interior style was strongly influenced by Art Nouveau – it was the first example of Art Nouveau in Istanbul. Viennese craftsmen made the iconostasis according to the Catholic model, and Atanas Chopov, secretary of the exarchate, and the architect Aznavour had to go to Russia to find a Russian company that would make an orthodox iconostasis. The iconostasis was made by Nikolai Akhapkin’s company in Moscow, the icons were painted by artist Klavdiy Lebedev, and the six bells were cast in Yaroslavl at Peter Olovyanishnikov’s factory. Two of these bells are still sounding today. 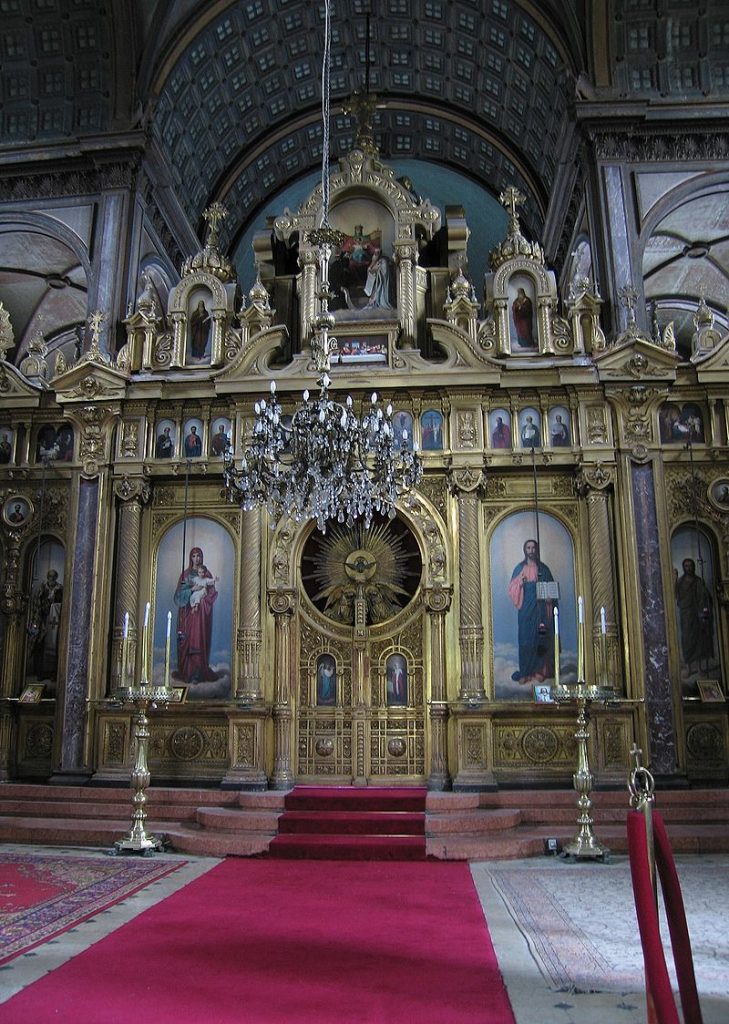 The solemn consecration of the new church was performed by Exarch Joseph I on September 8, 1898. From the old wooden church remained only the altar throne as a reminder of its historical role for half a century. 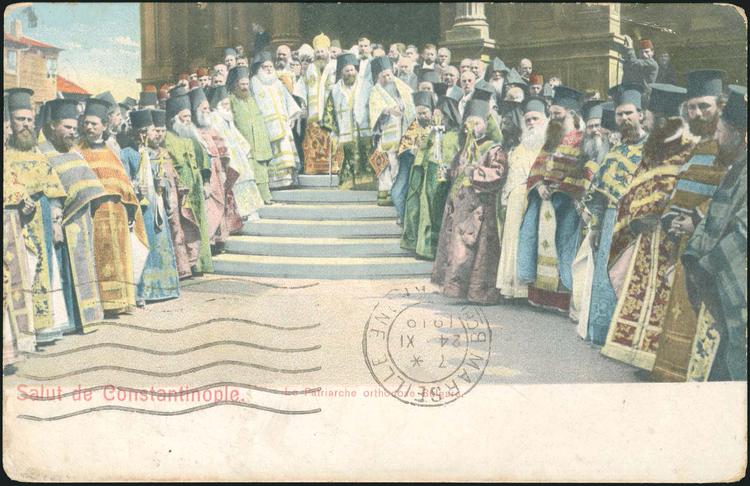 Consecration of the church in 1898, Ottoman postcard

Bulgarian church leaders – Hilarion of Makariopol, Avxentius of Velesh, Paisii of Plovdiv and Parthenios of Zograf – are buried in the church fence. 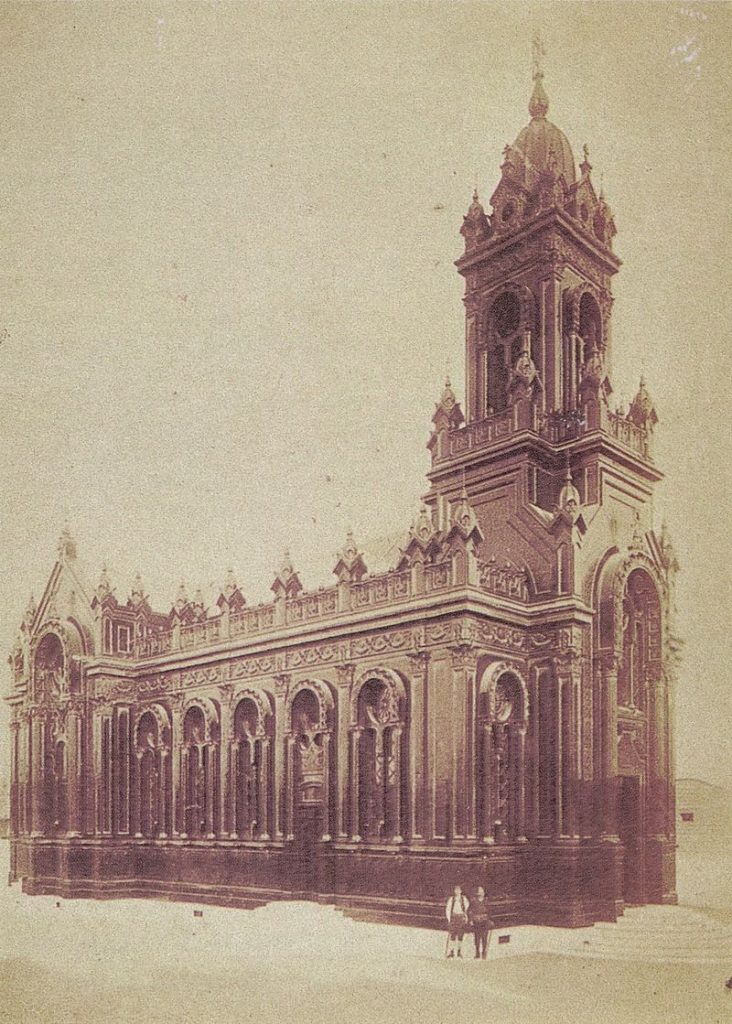 Prefabricated iron churches were a British invention. They were used for remote colonies like Australia. Such churches in the Philippines and Peru were built by French engineer Gustave Eiffel, creator of the famous tower in Paris. St. Stephen’s Church is one of the few iron churches that have survived to this day. 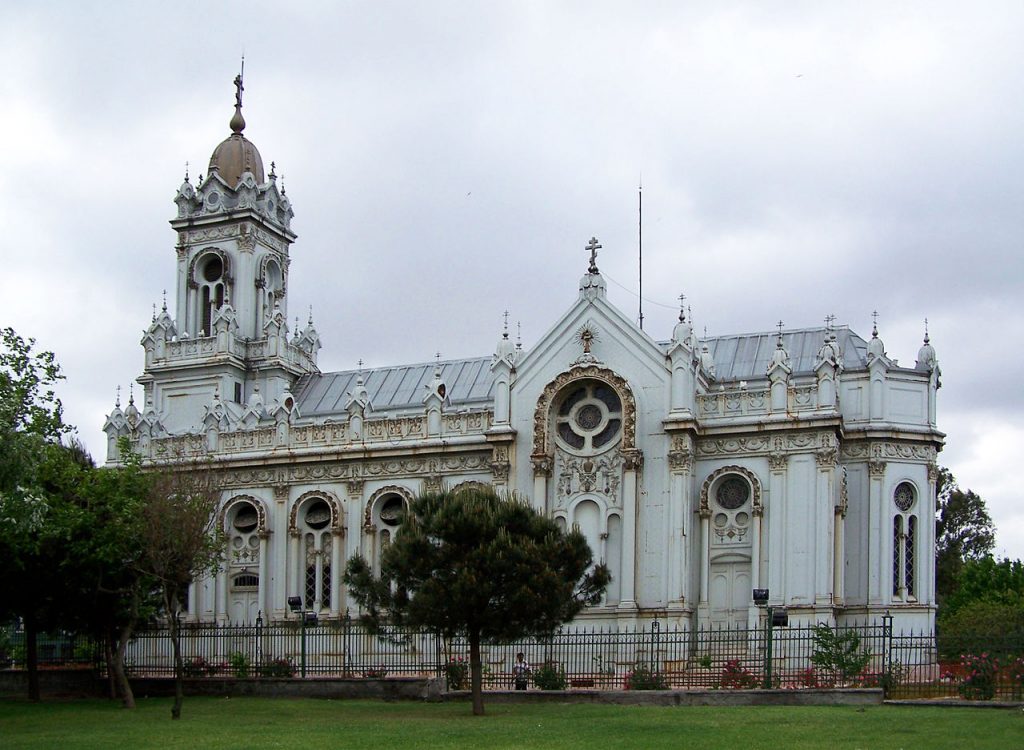 Until 1912, the church (first wooden, then iron) was the main cathedral of the exarchate. 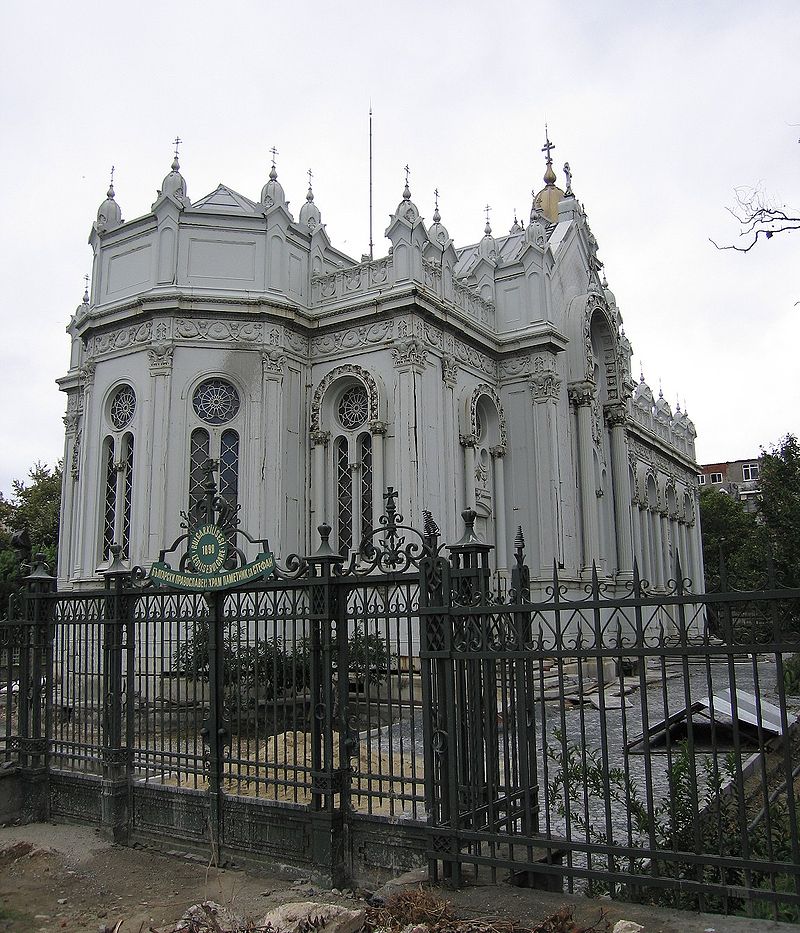 View from the Golden Horn Bay

On December 27, 2010, on St. Stephen’s Day, a memorial service was held in the church. The domes were covered with gold leaf the day before. On June 15, 2012, the church was returned to the Bulgarian community by a decree of the Turkish government. 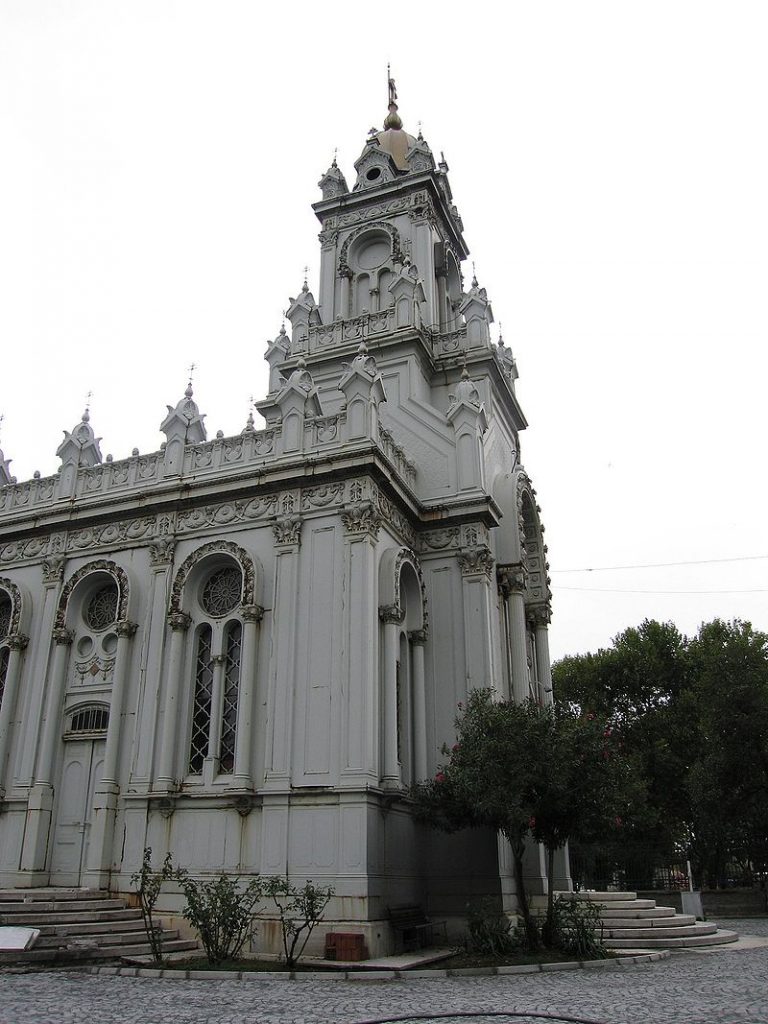 View from the entrance

The church was renovated (repairs took about seven years and included strengthening the supporting columns) and ceremonially opened to the public in January 2018, with Bulgarian Prime Minister Boyko Borisov and Turkish President R. T. Erdogan attending the ceremony. Most of the reconstruction costs were borne by the Turkish side within the framework of a mutual interstate program, under which the Juma Jamia Mosque in Plovdiv was restored in Bulgaria. The restoration cost about 3.5 million euros, of which Bulgaria provided 390,000. The Turkish media called the joint project to restore the church and the meeting of the two countries’ leaders “a symbol of good neighborliness and tolerance.

READ
Cherapunji is the wettest place on Earth. India

On September 30, 2018, celebrations were held to mark the 120th anniversary of the church, and a bust of Stefan Bogoridi was unveiled in the courtyard.

In addition, on this day.

On September 8, 1885, Prince Alexander Battenberg issued a decree recognizing the Unification of the Principality of Bulgaria and Eastern Rumelia.

On September 8, 1926, the kingdom of Bulgaria received from English and American banks, guaranteed by the League of Nations, a so-called “Refugee Loan” of 3,326,000 British liras, which was used to settle Bulgarian refugees who had moved into the country after World War I.

On September 8, 1944, the government of Konstantin Muravyev declared war on Hitler’s Germany. Despite this, the troops of the Third Ukrainian Front of the Red Army entered the territory of Bulgaria.

September 8, 1946 and in the kingdom of Bulgaria was a referendum on changing the form of government, in which 92.7% of voters chose the “People’s Republic” in preference to the monarchy.

On September 8, 1964 a new national anthem “Mila Rodino” was approved by a decree of the Presidium of the National Assembly of the NRB

The Cast-Iron Church is the name of the Bulgarian Church of St. Stephen (Sveti Stefan Kilisesi) in Turkish Istanbul. At first sight it has the characteristics of a stone Orthodox church. But in fact the church is made of prefabricated cast-iron elements. That is why it is called the Cast-Iron (or Iron) Church. 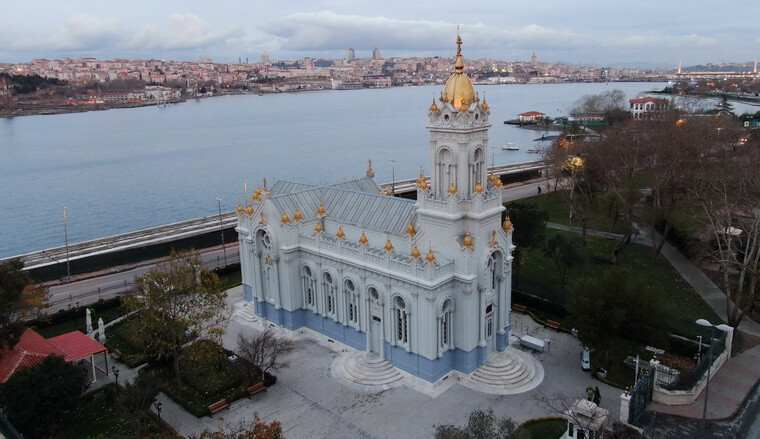 You would hardly notice that this church is made of cast iron.

The Iron Church is located on the Golden Horn Bay (which is part of the Bosphorus) on the European side of Istanbul.

What does the Cast Iron Church of Istanbul look like? 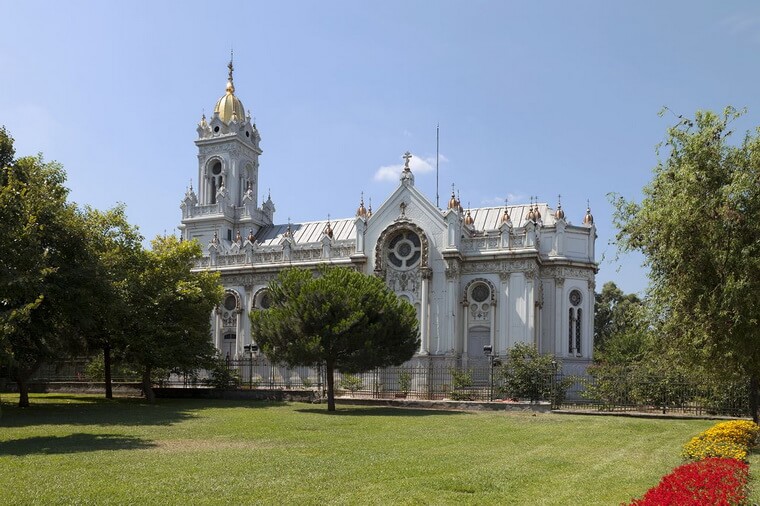 Everything from the walls to the little intricate decorations are made of metal. And the total weight of the entire structure is a little over 500 tons. Since the church is literally assembled from separate parts, a closer look reveals the heads of the large screws fastening them together.

The richly decorated church is a three-headed cruciform basilica. Its altar faces the Golden Horn and the bell tower reaches a height of 40 meters. 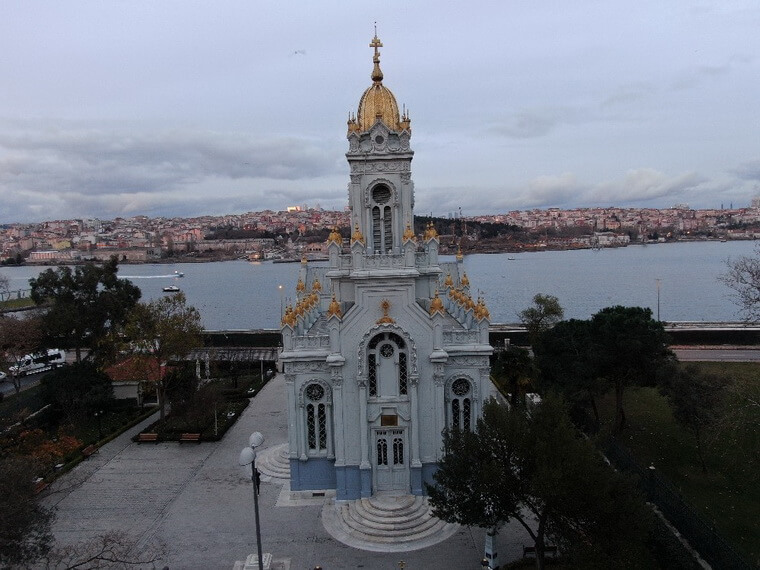 The bell tower of the Cast Iron Church

An interesting fact – six bells of the Chugunnaya Church were cast in Yaroslavl. And two of them still exist. The wooden iconostasis inside the church was also made in Russia 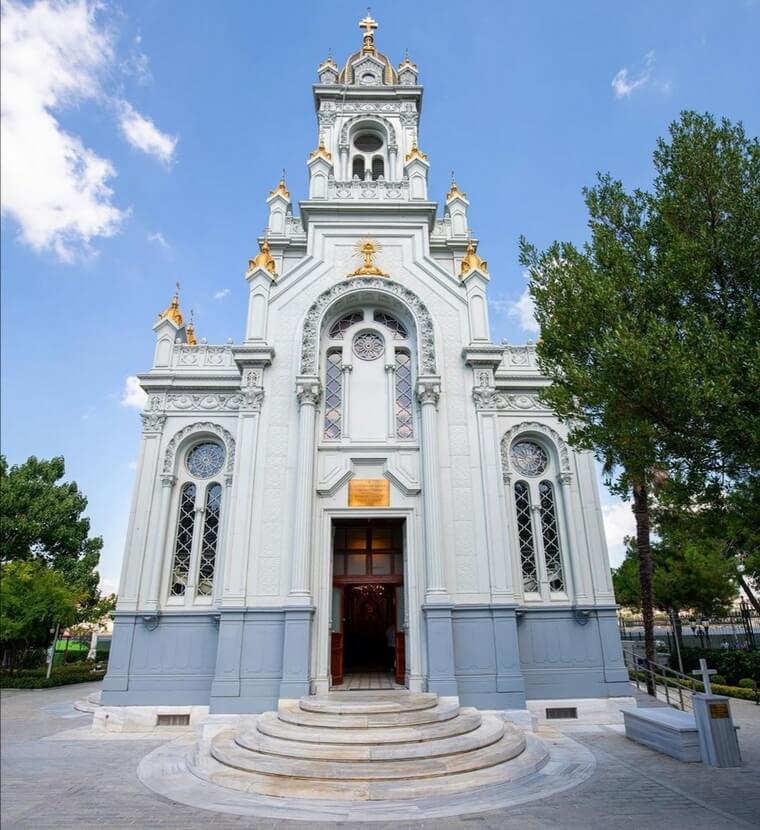 The central entrance to the Church of the Cast-iron

History of the Cast-iron Church

This interesting church appeared in Istanbul in the mid-19th century, at a time of growing Bulgarian influence. For decades, the Bulgarian population of the Ottoman Empire worshipped God along with the Greeks. But the Bulgarian diocese was unhappy with the superiority of the Greek clergy. The Bulgarians wanted their own places of worship.

To ease tensions between Bulgarian and Greek parishioners, Sultan Abdulaziz granted their wish.

The original donated building on the banks of the Golden Horn, between Istanbul’s Balat and Fener squares, was the first Bulgarian church in the Ottoman city. It was wooden, however, and soon burned down.

To replace the burned shrine, the Bulgarian government announced a competition to design a new church. The winning design was the Armenian architect Hovsep Aznavur, who proposed a construction made entirely of cast iron.

The Austrian company R. Ph. Waagner received an order to create thousands of prefabricated cast-iron items. The whole process took about three years (1893 – 1896). After that 500 tons of iron constructions were loaded on barges and sent from Vienna to Istanbul across the Danube River and the Black Sea.

The decision to build the church as a prefabricated structure made of steel and cast iron is due to the fact that the soil in this area is not very strong. A full brick building would definitely weigh considerably more. Accordingly, its collapse would be more likely.

Unfortunately, the Iron Church is very close to the salty Sea of Marmara. 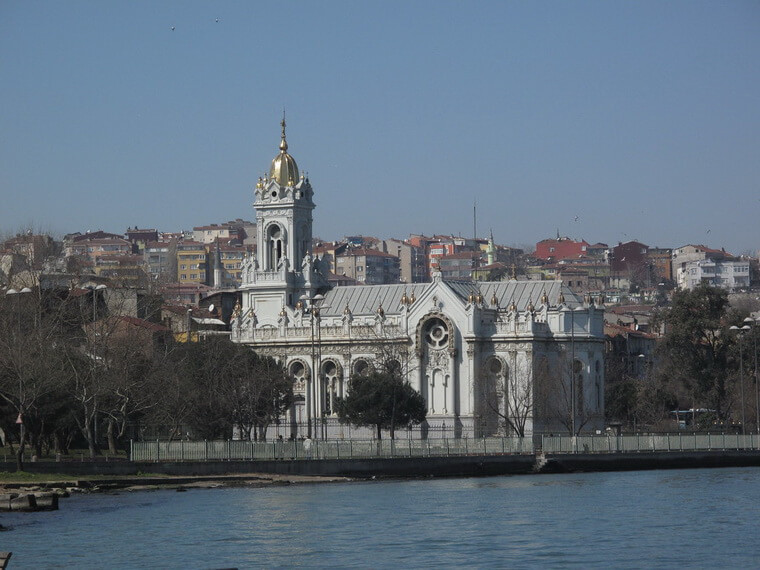 The cast-iron church was built right on the shore of the bay.

This proximity had a detrimental effect on the metal. The church simply began to rust soon after it was completed. 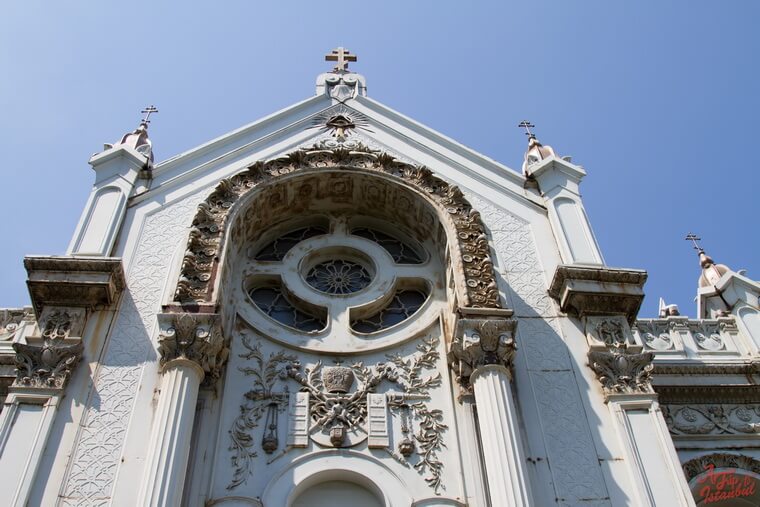 If you look closely, you can see the characteristic rust stains.

Fortunately, the governments of Turkey and Bulgaria agreed to carry out restoration work. In 2018, the temple reopened to the public.

The Legend of the Iron Church

According to legend, the Bulgarians had long asked the sultan for a church of their own in Istanbul. But the Ottoman ruler, unwilling to give them permission, gave the Bulgarians only one month to build it. And the architects came up with an ingenious plan to build St. Stephen’s Church from prefabricated parts somewhere else and then assemble it in Istanbul in less than a month. Whether this is true or not is unknown. But it sounds pretty original. 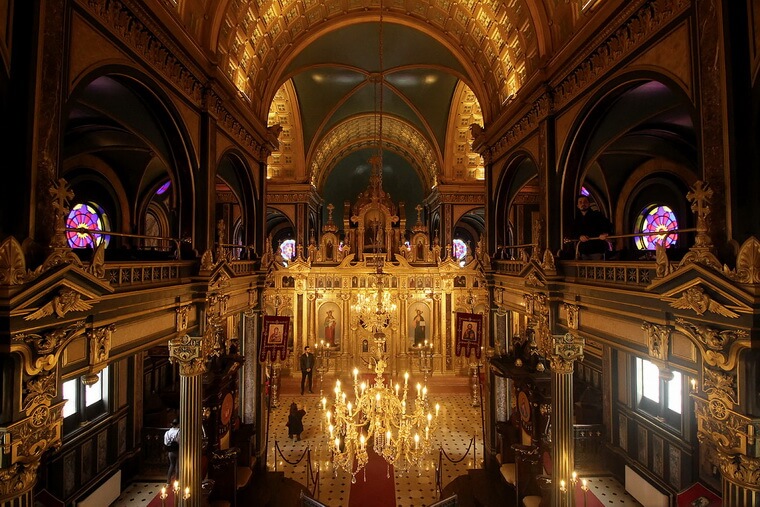 Stunning both inside and out, the Iron Church is one of the most interesting sights in Istanbul