Miramare Castle, surrounded by a flowering park, was a historical residence of the Habsburgs. It is a relatively modern castle, but in medieval style. 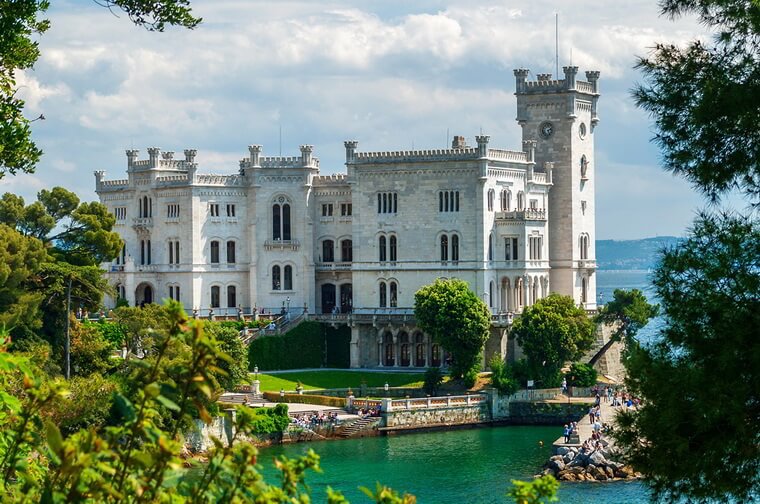 Where is Miramare Castle

It stands on the rocky promontory of Grignano in the Gulf of Trieste, 10 kilometers from the city of Trieste, in northeastern Italy. 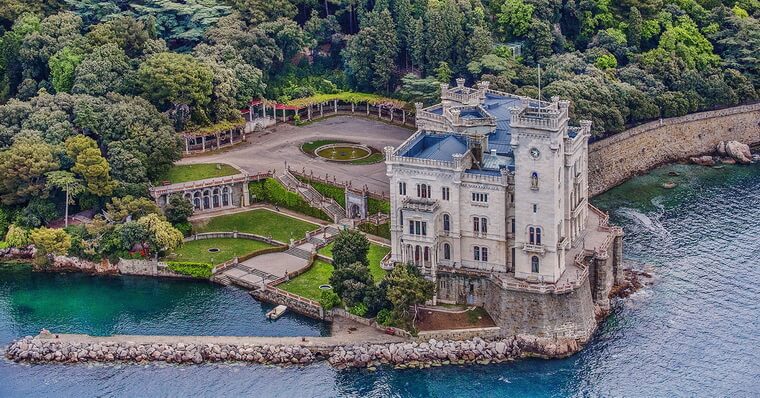 This is a classic castle in the spirit of the Middle Ages. It is in a surprisingly beautiful and serene location on the shores of the Gulf of Adriatic Sea. The castle is surrounded by well-kept gardens. On the territory there are fountains, sculptures and a museum. 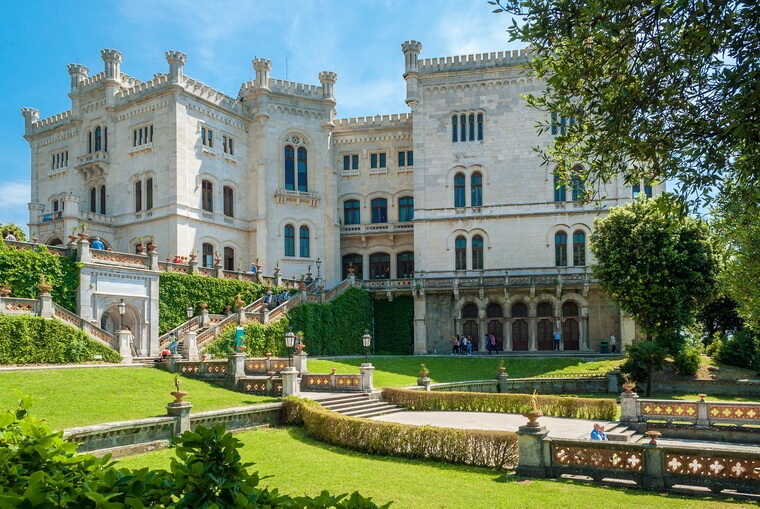 Miramare Castle and its park were built by order of the Austrian Archduke Ferdinand Maximilian of the Habsburg family. He decided to build for himself and his wife Charlotte of Belgium a residence befitting their rank.

Struck by the beauty of the area, Maximilian bought the land at the end of 1855. On March 1, 1856, construction of the castle began. Already in 1860, the Habsburgs moved into the castle. But work on the improvements were still going on. 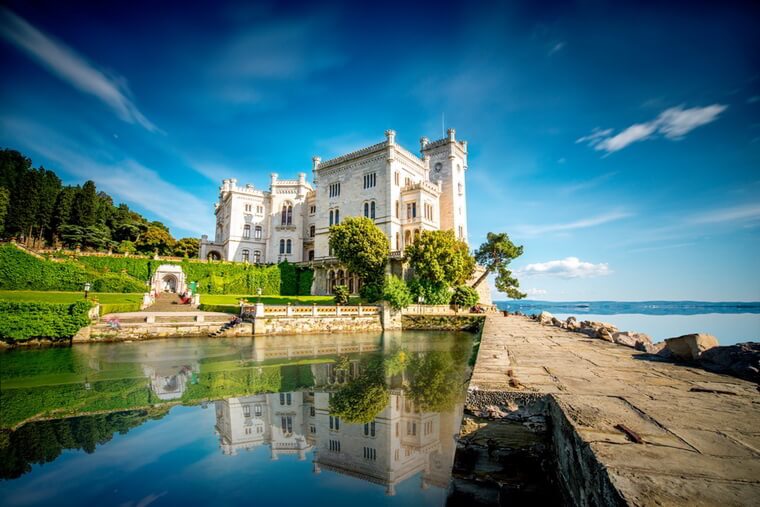 Architecture of the castle

The main architect was the Austrian Carl Junker. The style of the castle reflects the artistic preferences of the Archduke, who was well versed in architecture. Gothic, Medieval and Renaissance features are combined in this castle.

Franz Hoffmann and his son Julius were entrusted with creating the perfect interior. Today Miramare Castle is an excellent example of a luxurious aristocratic residence which has retained its original furnishings. 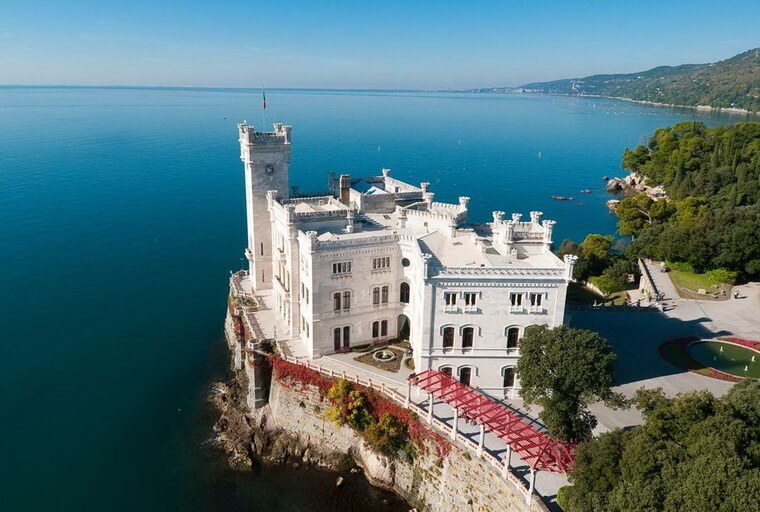 The park is laid out around the castle and covers an area of about 22 hectares. It is the result of much hard work. The site was planned by Karl Juncker, but Josef Laube and a little later Anton Jelinek were invited to work on the plants.

Much of the soil was brought in from Styria and Carinthia. Nurseries, mainly from the Lombardy-Veneto region, received a rich variety of trees and shrubs. Many plants are brought in from abroad.

A large part of the park is occupied by the “forest”. Trees alternating with meadows, winding paths, pavilions and ponds, reminiscent of the English landscape. 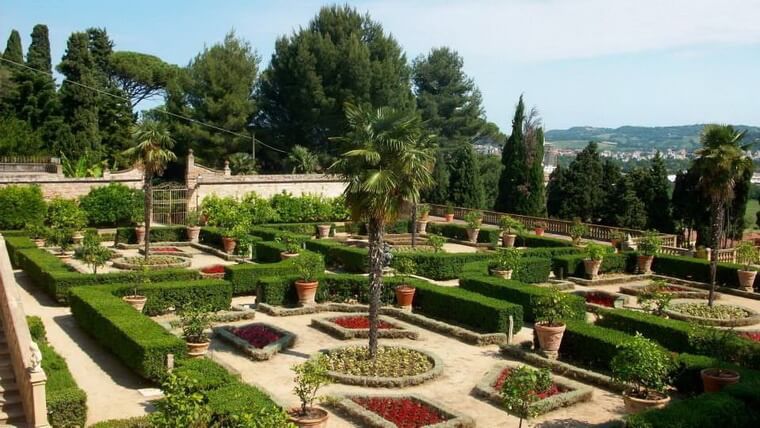 Separately, we would like to mention the sculptures made by the Berlin firm of Moritz Geiss. The so-called “Swiss Cottage” is on the edge of the swan pond. There is also a small square with cannons donated by King Leopold I of Belgium and the chapel of San Canciano.

On a small promontory at the north end of the castle you will find a sculpture of the sphinx. 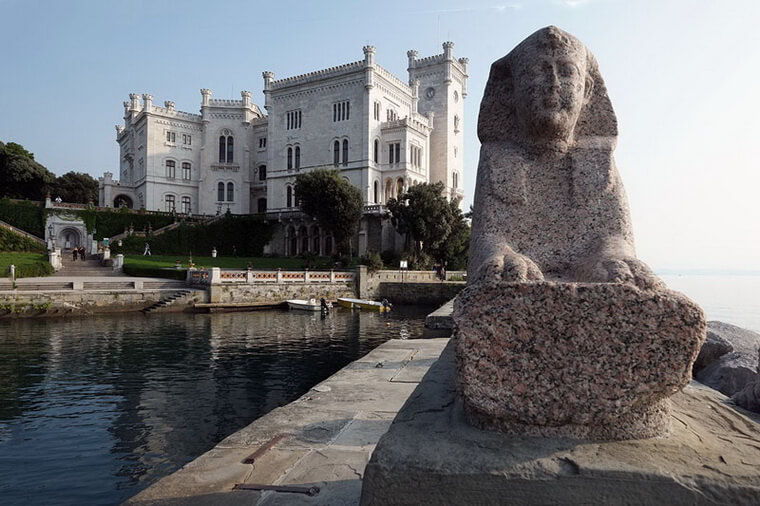 The sphinx sculpture on the stone promontory

A small replica of the Gartenhaus was built along with the castle. It is 300 meters north of the original. It is also called “Castelletto”, which means “little castle”. Maximilian and Charlotte sometimes lived here. 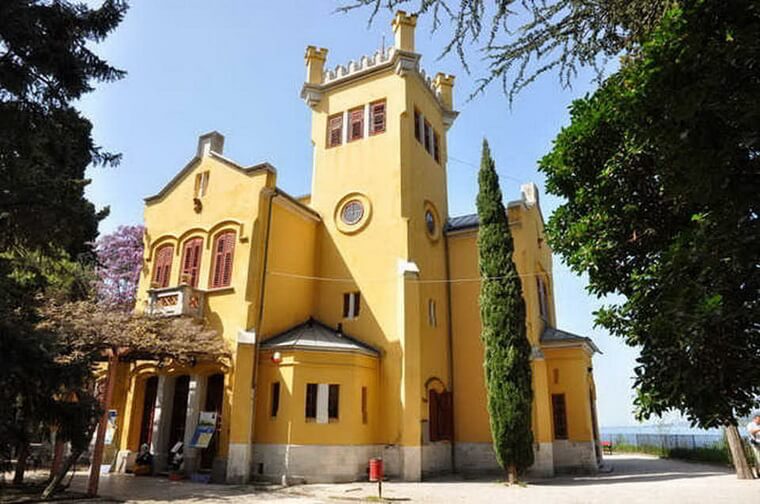 Castelletto is a smaller copy of Miramare Castle

Castelletto is associated with the tragedy of Maximilian and Charlotte’s family. It was here that Charlotte was locked up after her return from Mexico. She had a nervous breakdown. She spent some time here from late 1866 to early 1867.

The tragedy of Charlotte and Maximilian

In 1864 they traveled to Mexico. Napoleon III (Emperor of France) and the Mexican monarchists invited Maximilian to become emperor of Mexico. He accepted the offer. But Mexico was going through a civil war at the time. Although many European countries recognized Maximilian as emperor of Mexico, the United States supported the opposition led by President Juárez.

In 1866, Charlotte returns to Europe for support from Napoleon III and the Pope. But she does not receive it. Against this background, she had a severe nervous breakdown. She therefore remained in Castalletto until the beginning of 1867.

Meanwhile, Maximilian himself is imprisoned by Juarez’s troops. In 1867 he was executed. Charlotte is not told of her husband’s death for a long time. She is brought back to Belgium. She has never returned to the castle since. Her mental health did not recover until her death.

Further fate of the castle

Since 1867 Miramare Castle was occasionally used by the Habsburg family. The last Habsburgs here were Emperor Charles and his wife. With them, the history of the Habsburg Empire ended.

At the outbreak of the First World War in 1914, all the furniture from the castle was shipped to Vienna. Then the city of Trieste fell under Italian sovereignty. The castle became state property. An agreement was reached with Austria to reconstruct the castle and open it as a museum.

On March 24, 1929 the museum was opened. But already in 1931 the Duke Amedeo of Savoy-Aosta arrived here, who lived in the castle until 1937. During this time the castle was equipped with two elevators, telephone lines, neon lighting system, running water and central heating.

In 1943, during World War II, the Germans converted the castle into an officer training school. In 1945, New Zealand troops took possession of the castle. Then it passed to the British. Then the Americans took it over. They remained in the castle from 1951 to 1954. In 1954, the city of Trieste and the castle Miramare returned to Italy. In 1955, the park and museum are reopened to the public. 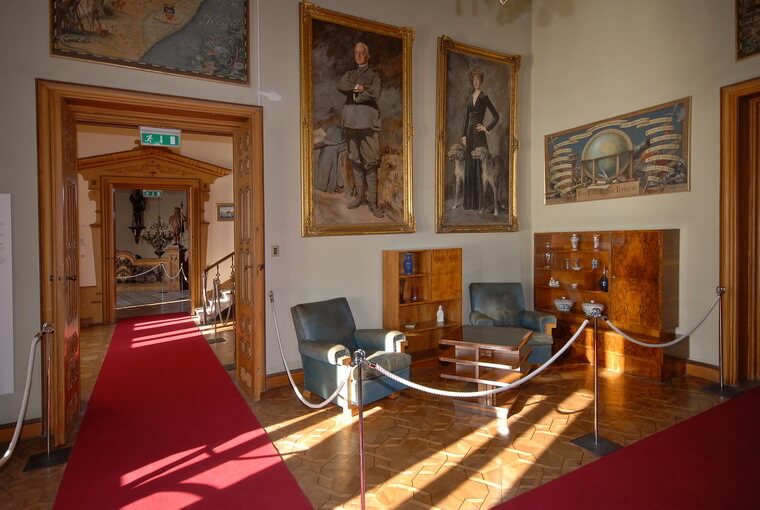 The Castle of Miramare in tourism

Today the castle has been restored and is available to tourists. There is a fee to visit the castle, but you can walk in the park for free. In the rooms of the castle there is furniture and paintings of the 19th century.

Visitors can see the rooms of Maximilian and his wife Charlotte, the guest rooms and information room, where you can learn the history of the castle and the surrounding park. Of note is the room in which Charlotte played the piano. 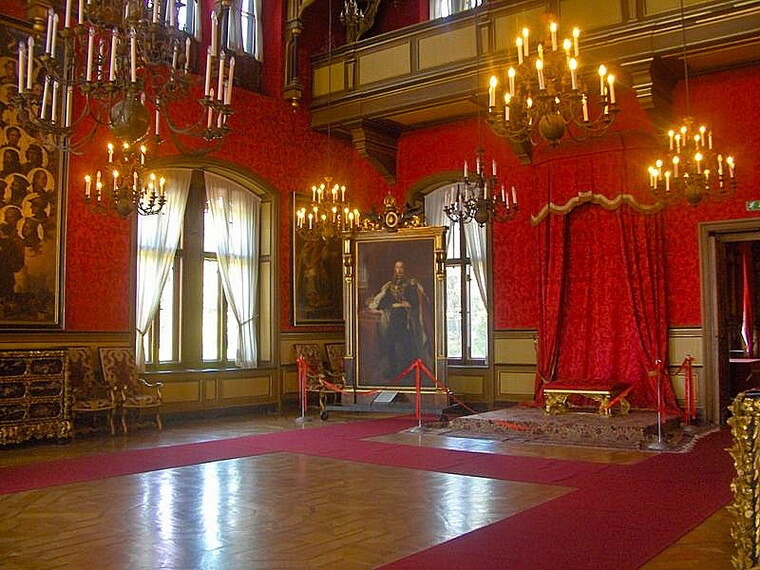 The interior of Miramare Castle 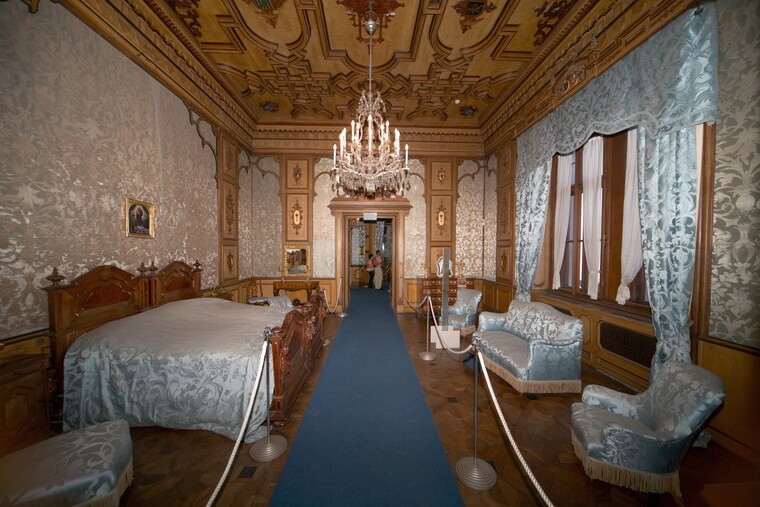 EU citizens aged 18 to 25 years (with ID) can visit the museum for free. Free admission is also provided for all visitors on the first Sunday of each month.

Miramare Castle: the white-washed symbol of Trieste that is cursed

Just a few kilometers from Trieste, in the bay of Grignano, is the snow-white symbol of the city, the romantic Miramare Castle, which offers a stunning view of the sea.

The white fairy-tale castle, surrounded by a green and lush park, overlooks the endless waters… A gentle breeze blows on the terrace, bringing with it the enchanting scent of the sea… This romantic description could not be better suited to the residence built by Archduke Maximilian of Habsburg for his beloved Charlotte of Belgium. It was between 1856 and 1860. 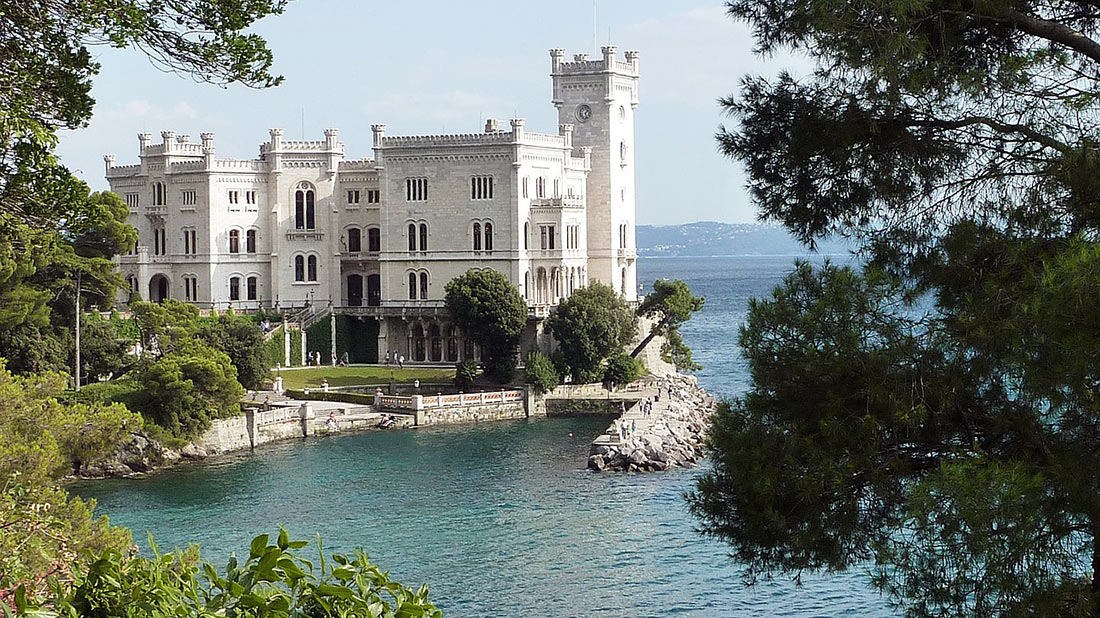 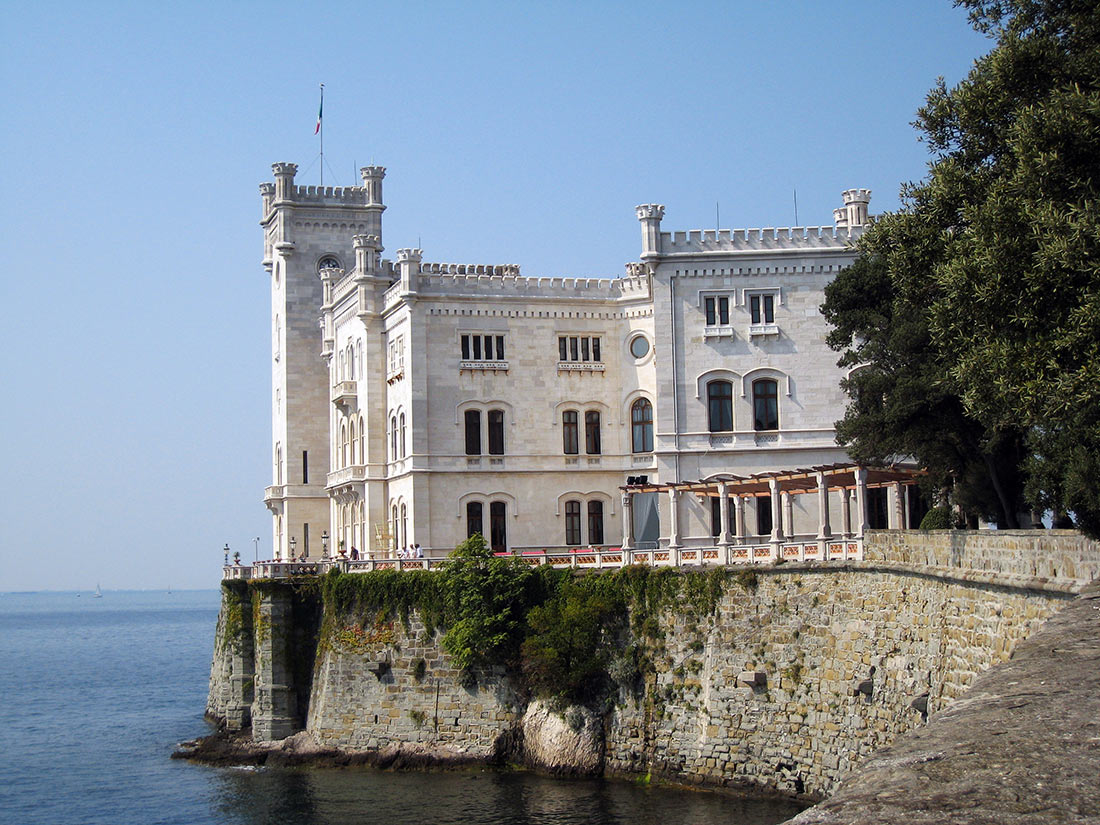 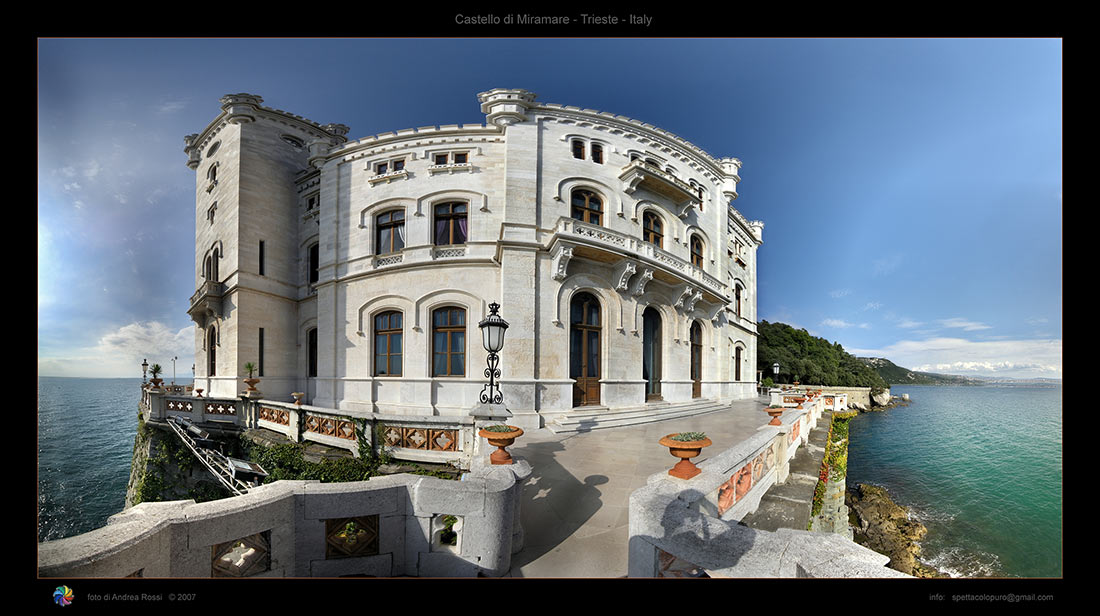 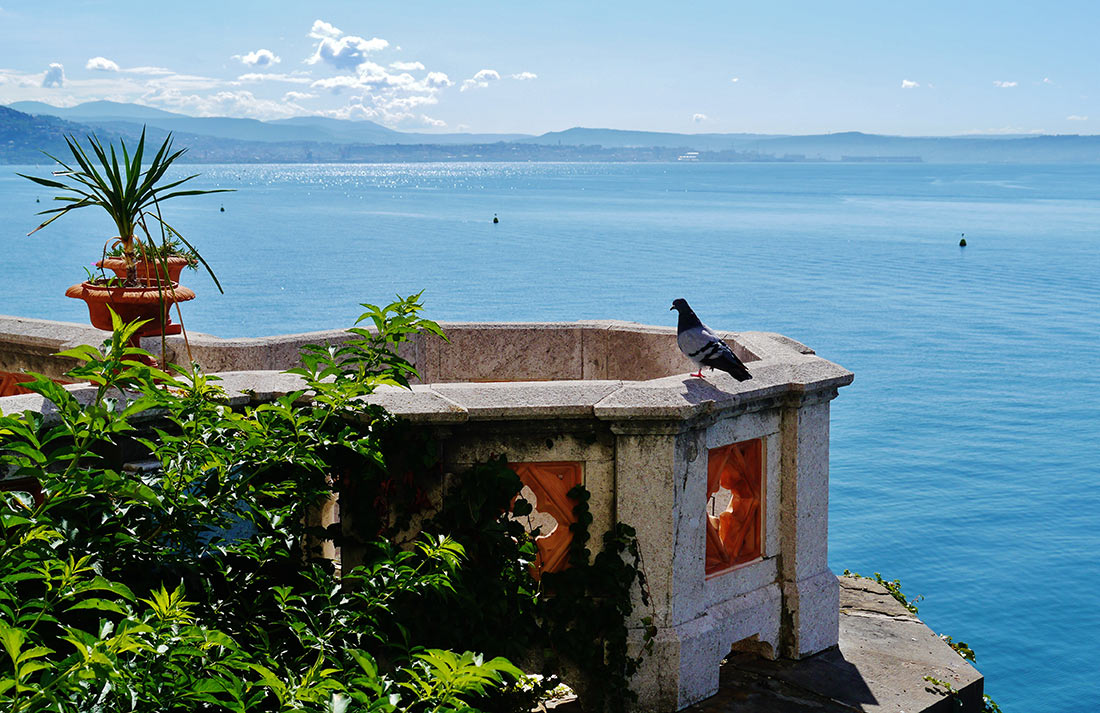 But Maximilian’s desire for power, and Charlotte’s desire for fame, drove them to leave for Mexico. There the archduke became emperor, but was soon assassinated. Charlotte returned to Trieste. But she lived not in a large castle, but in a small residence of Castelleto, surrounded by trees. The death of her husband affected her sanity. 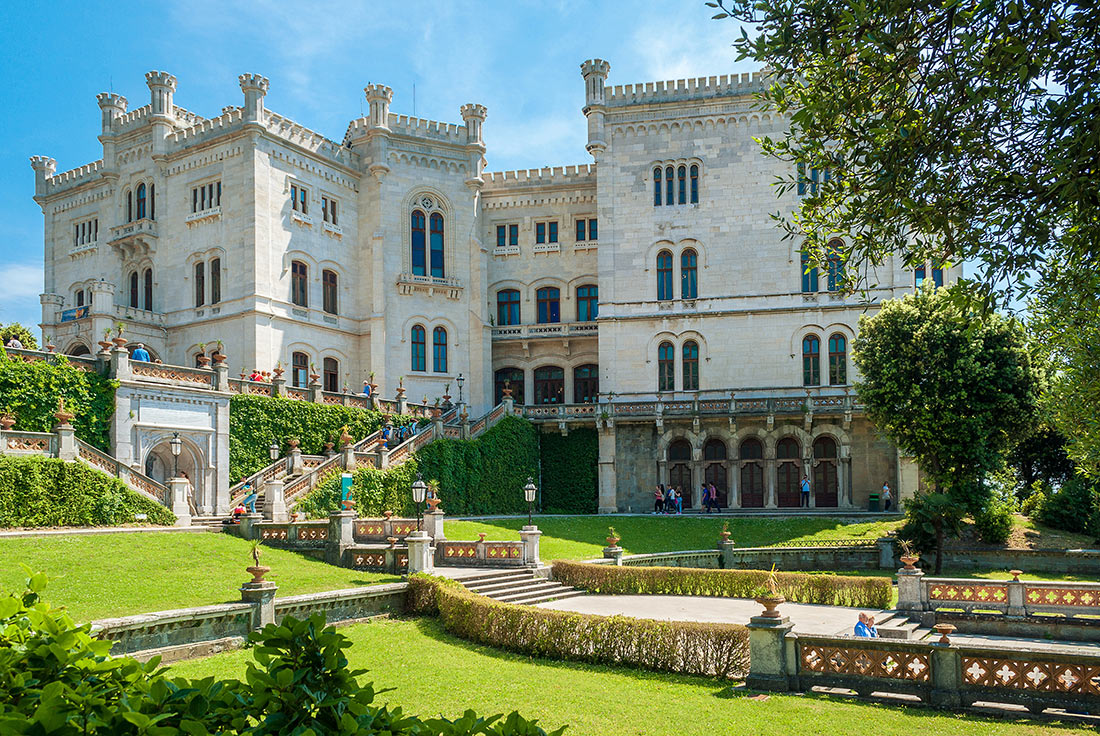 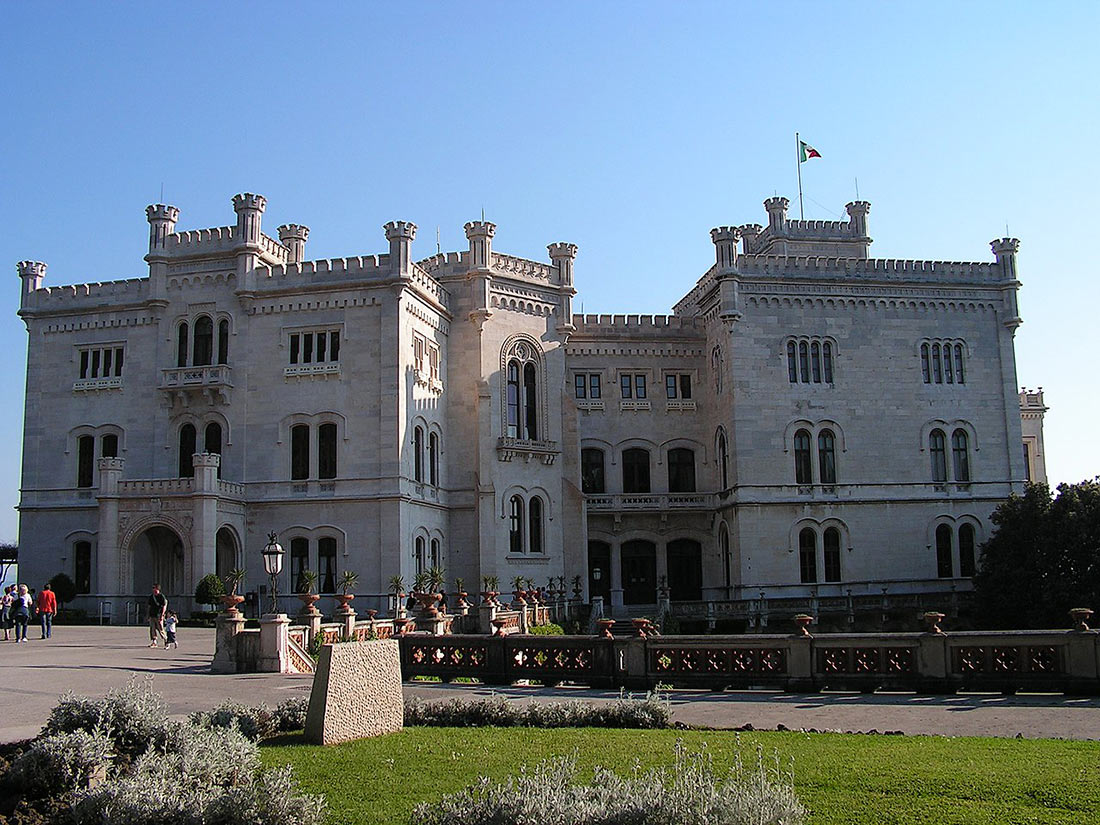 The legend of the Castle of Miramare

Legend has it that those living in the castle are destined to die prematurely in a foreign land. Perhaps this curse is linked to the majestic Egyptian Sphinx, as a silent guard on the dock of the castle’s small port, waiting for the return of the man who plucked it from the Land of the Pharaohs and brought it to this remote corner of the Adriatic? 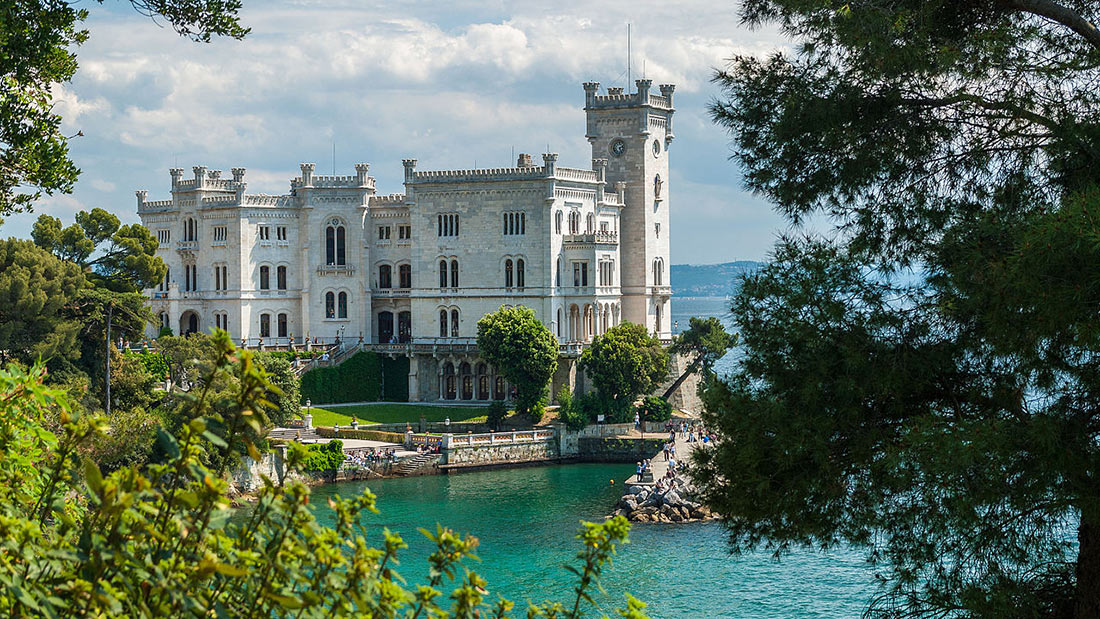 These days, the story of the curse seems more like a fiction for tourists. Be that as it may, the chain of mysterious deaths makes one wonder… Maximilian Habsburg died on the other side of the world, his wife went mad, and Duke Amedeo d’Aosta, who later lived in chambers on the upper floor of the castle, died in captivity in Ethiopia. The German General Friedrich Rainer, who lived in the castle during World War II, was shot by partisans. Archduke Franz Ferdinand of Austria was murdered in Sarajevo in an attack that led directly to the Great War. Some people believe in the curse, others do not, but New Zealand Colonel Bowman believed in it so much that during the Allied war government he preferred to sleep in a tent in the park rather than in the richly furnished bedrooms of the castle. 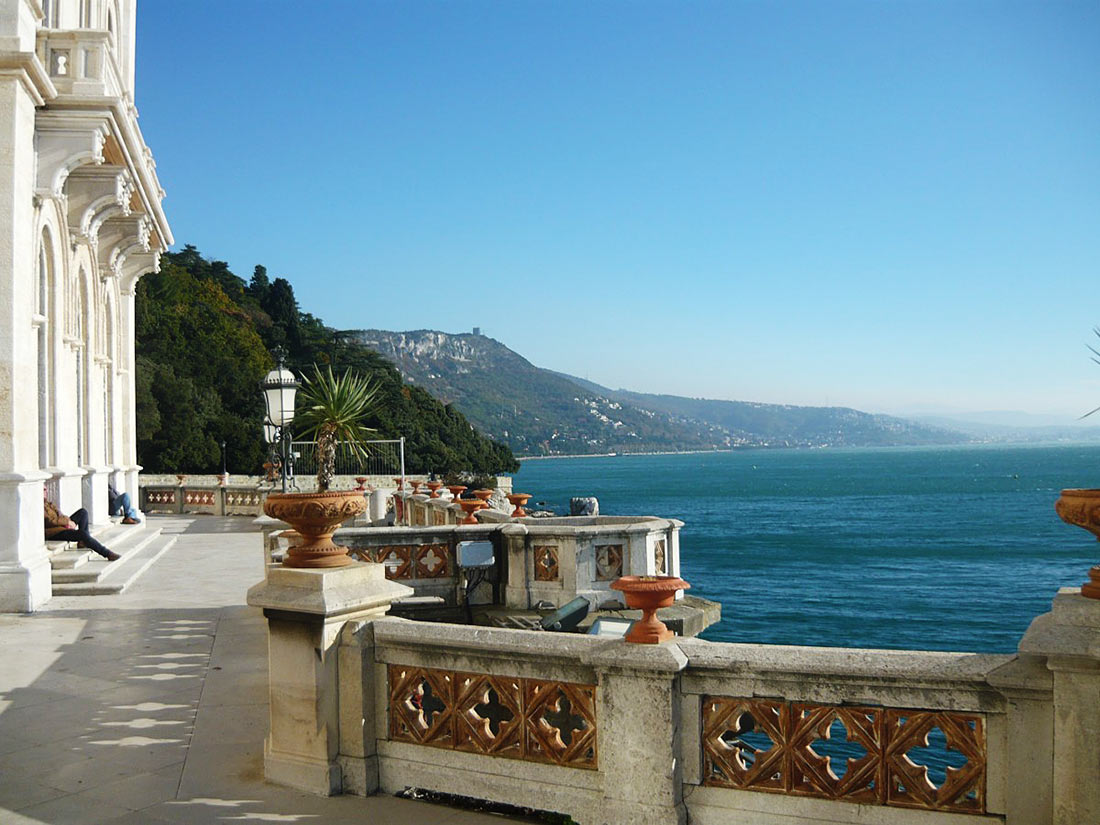 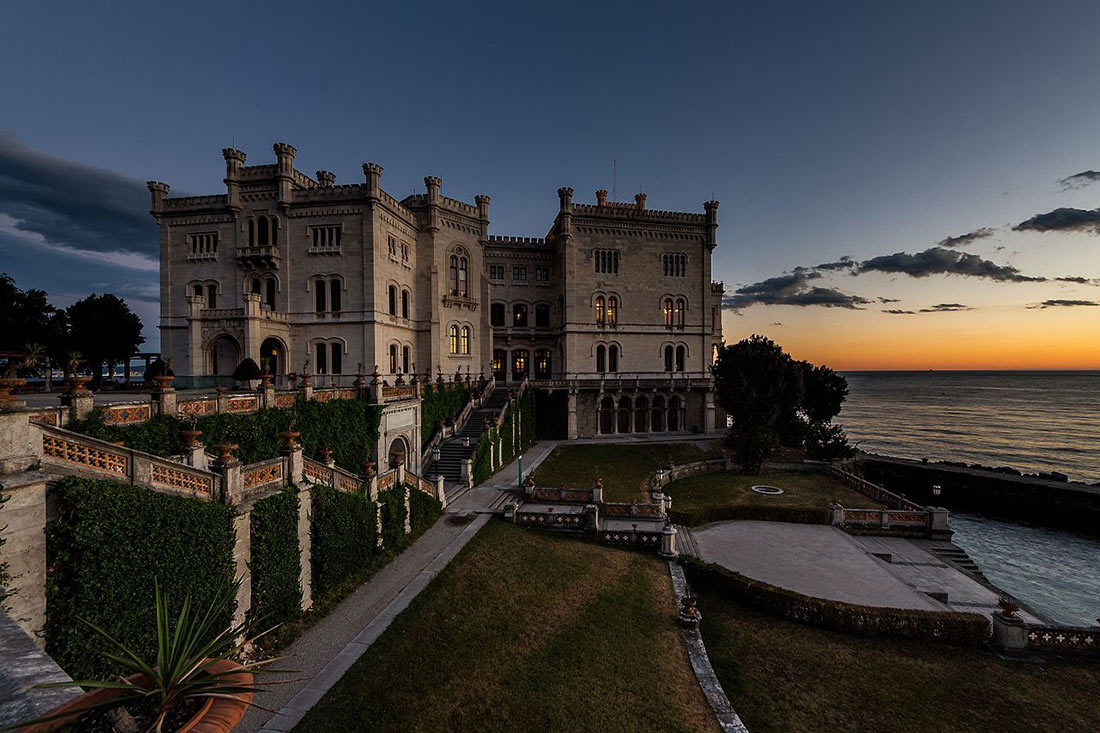 In 1955 Miramare Castle became a historical museum. It has a valuable collection of oriental vases. 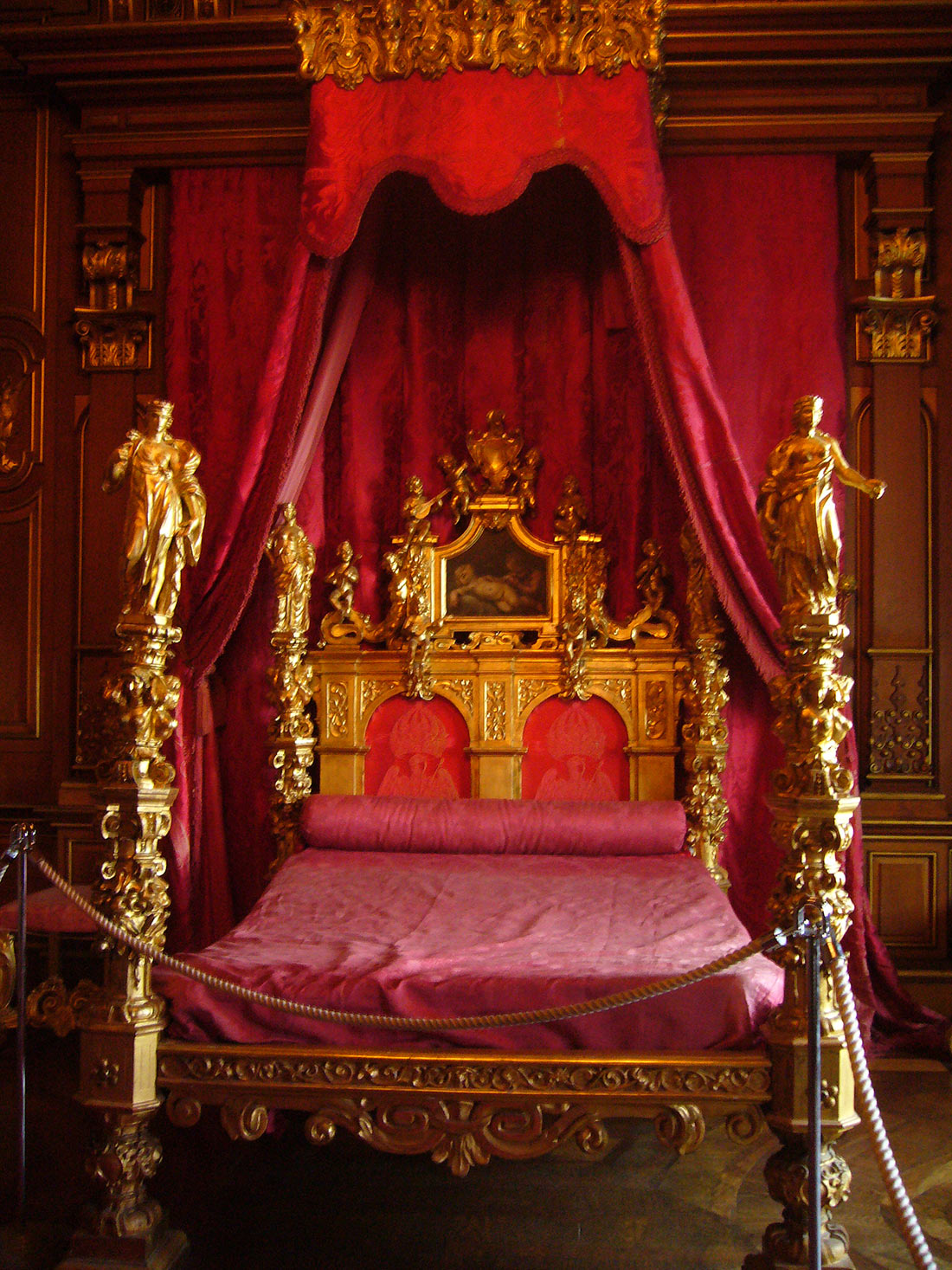 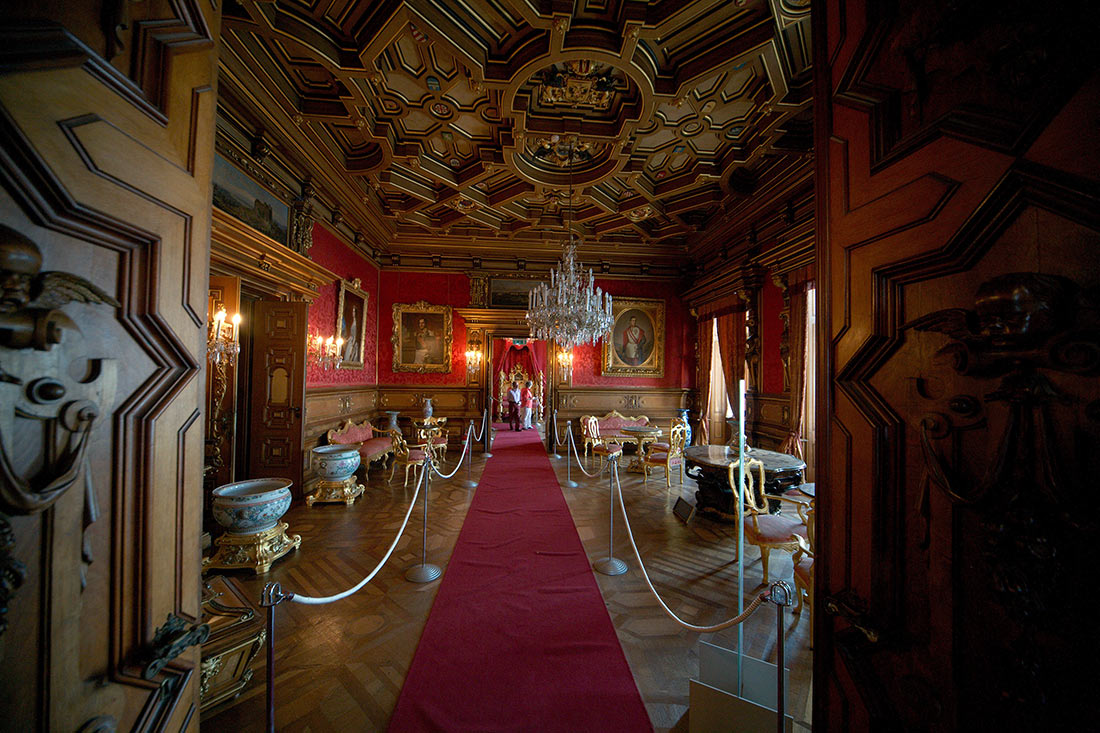 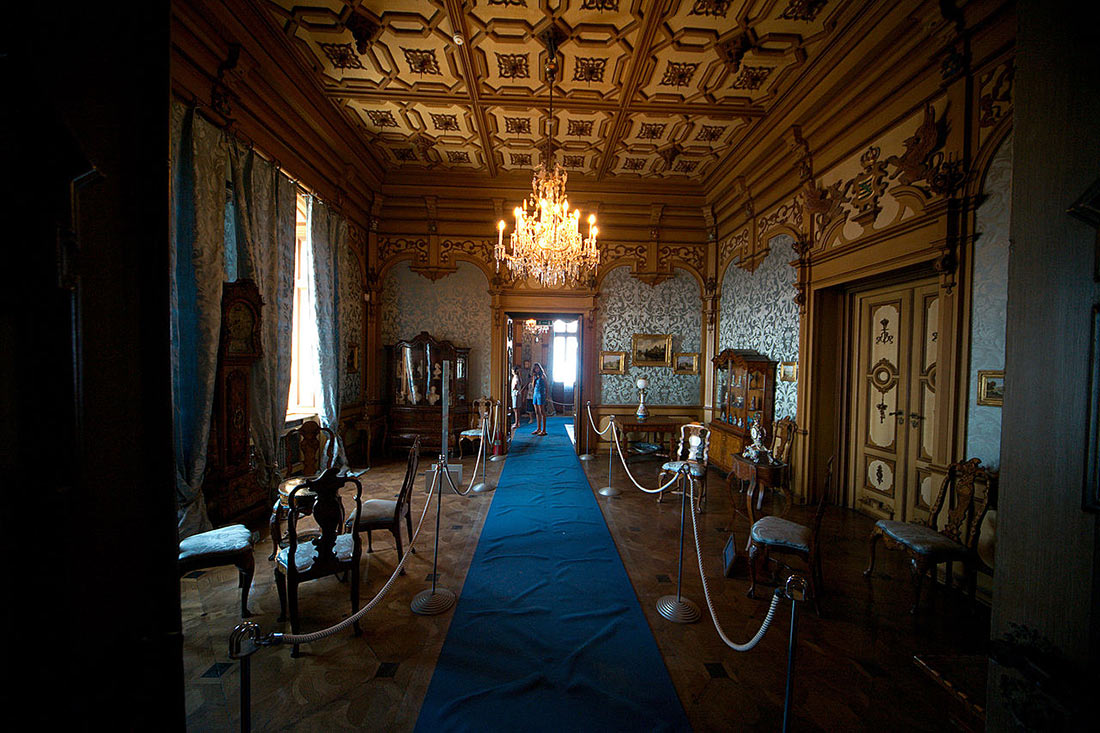 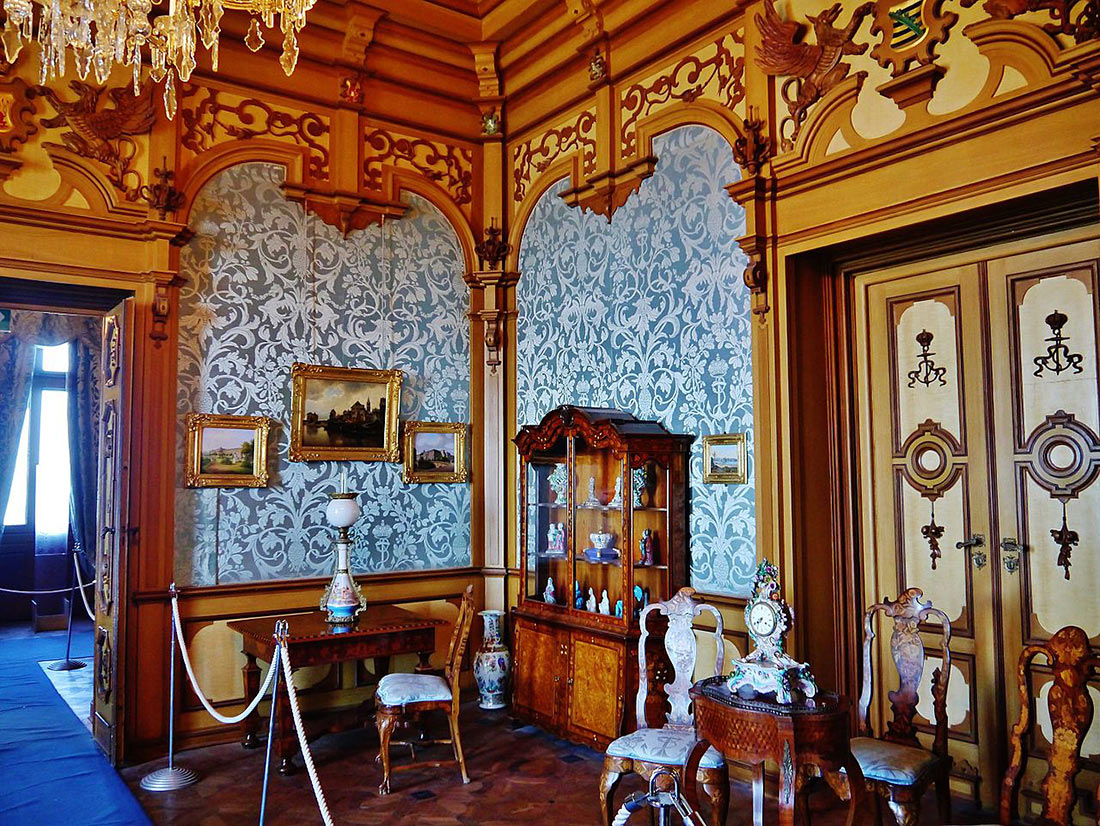 There are always a lot of visitors to the castle. Everyone wants to see the private apartments of the Archduke and his wife, the guest rooms, the library, which includes more than 7,000 volumes, and the majestic throne room, recently restored to its original splendor. It is the largest hall in the castle. It has many mirrors and the ceiling is decorated with wooden trusses. Very interesting is Maximilian’s workshop, which reproduces part of the stern of the Novara, the warship on which he served as commander-in-chief of the Austrian navy. 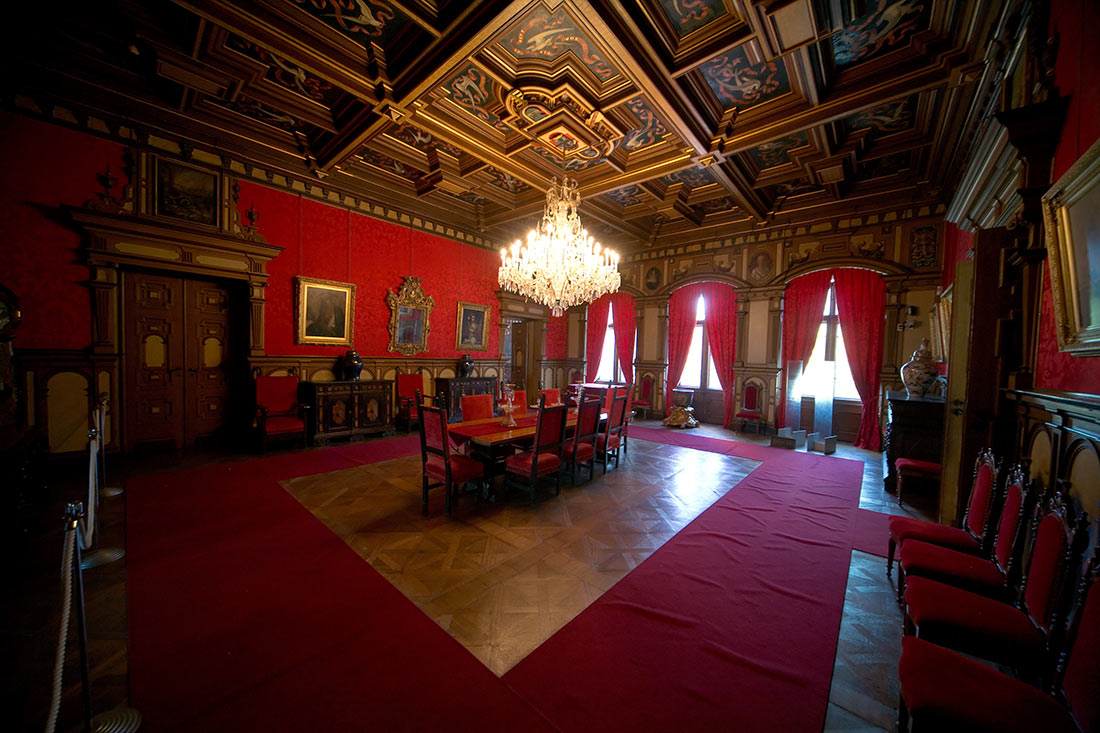 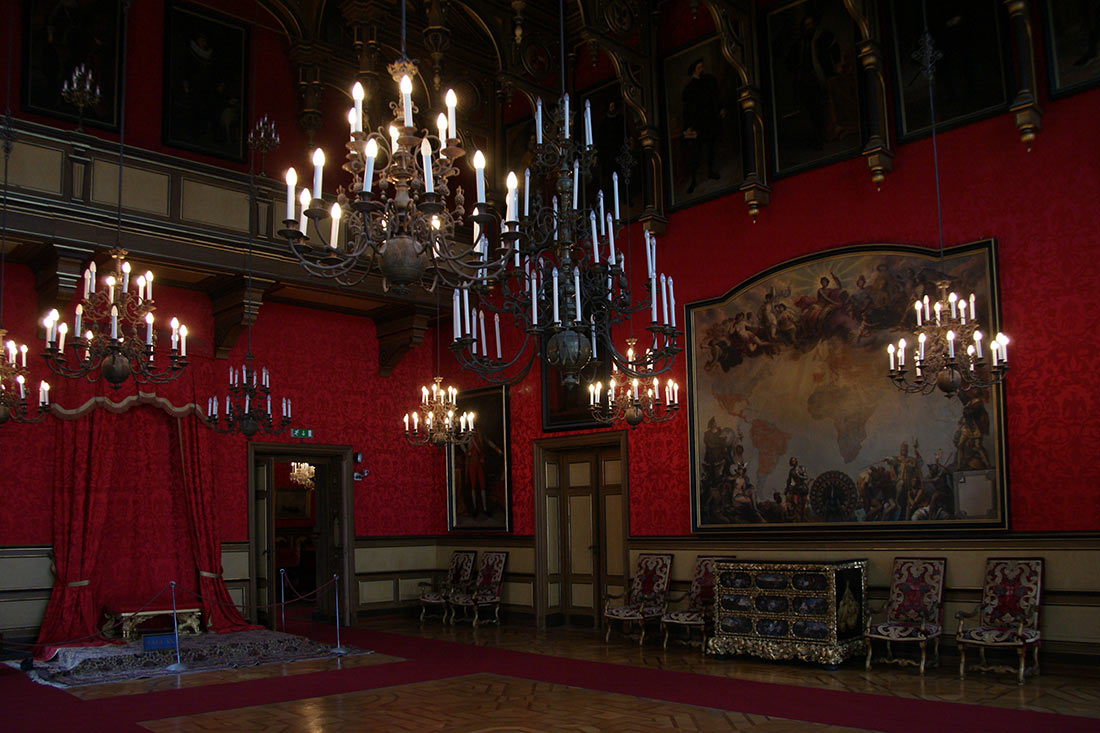 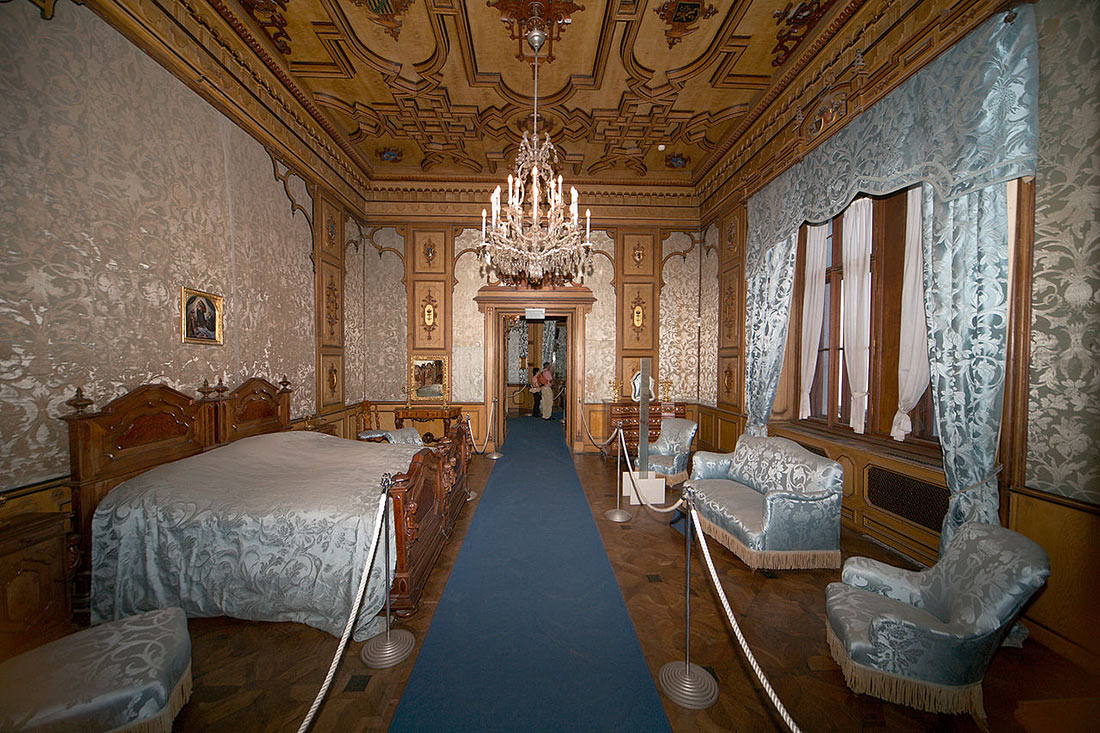 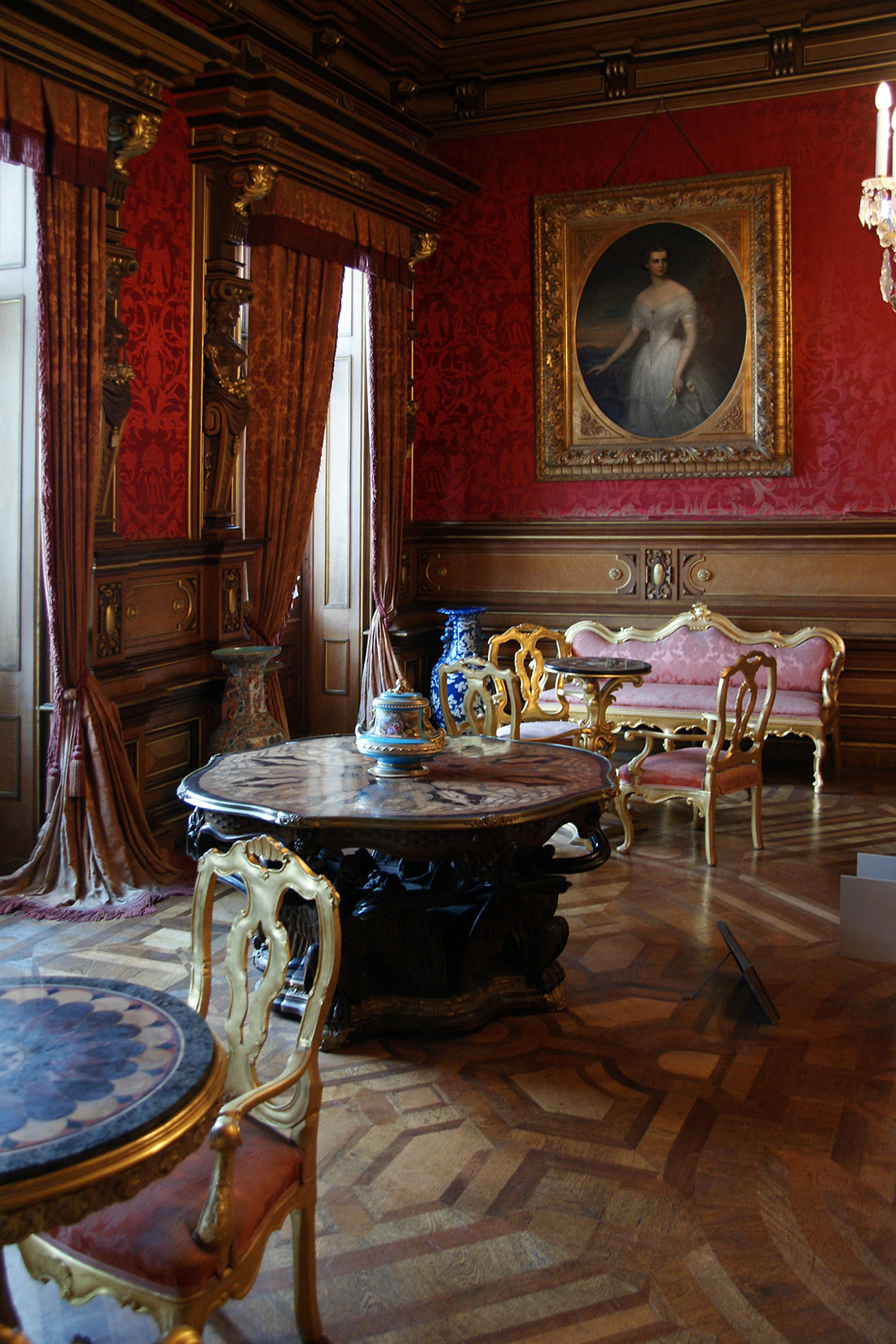 The castle is surrounded by a huge park of 22 hectares. It features magnificent plants, many of which Maximilian brought back from his travels around the world. There are Lebanese cedars, Spanish firs, Californian and Mexican cypresses, giant sequoias and ginkgo biloba. Paths and ponds alternate with flower gardens, there are greenhouses, an Italian garden and a small forest. There are many sculptures in the park, and near Swan Lake there is a “Swiss House”. In the chapel of San Canciano you can see a crucifix made of wood by the same “Novara”.