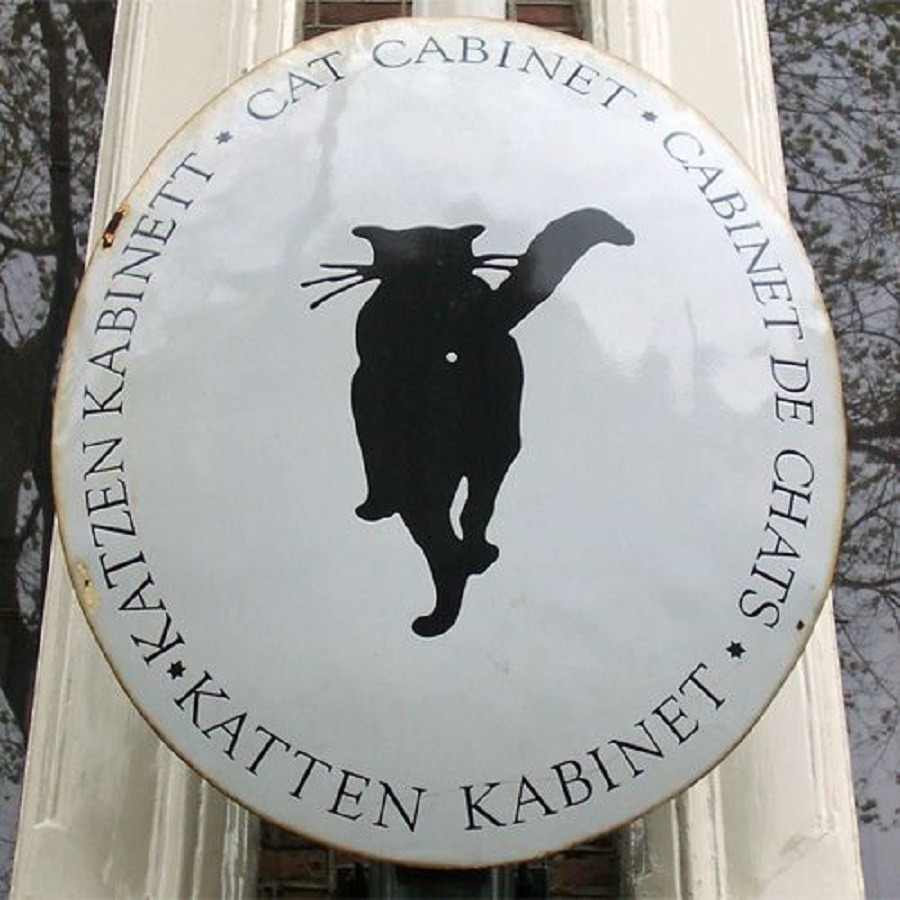 In the center of Amsterdam on the canal embankment at number 497 is a very unusual Cat Museum or as the people of Amsterdam call it – De Kattenkabinet. The vast exposition of the museum is entirely devoted to the theme of cats, and includes paintings, sculptures and other works created by various masters, including many world-famous geniuses: Picasso, Henri de Toulouse-Lautrec, Rembrandt, Sal Meyer, and others.

The Cat Museum was founded in 1990 by Bob Meyer to commemorate his pet fiery red cat named John Pierpont Morgan. Bob simply adored his G. P. Morgan, and so always gave him expensive birthday gifts. Of course, it’s doubtful that the cat could have appreciated them, but visitors could appreciate Bob Meyer’s imagination. And he was a real crank! On his first birthday the cat received a portrait as a present; on his tenth birthday the cat received a sculpture; his fifteenth birthday was marked by the album of poems, in which all of them were devoted to the cat Morgan, and also by the creation of a one-of-a-kind cat dollar, on which instead of the portrait of the president he painted his clever little face. P. Morgan. 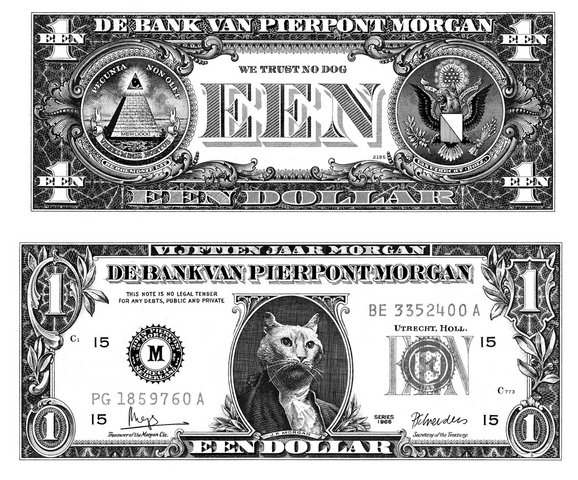 Not without reason, the cat was named after the American magnate, financier and philanthropist. And when Bob’s pet, who lived long enough for a cat – 17 years, passed away in 1983, the amazing owner set a goal to create a real museum in honor of his pet. And so a museum appeared in Amsterdam, which can satisfy the needs of several categories of tourists: those who love art, those who love cats, and finally, those who just like everything unusual! 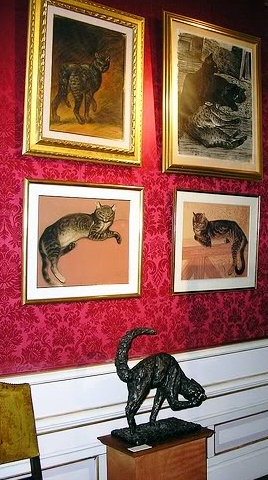 The building itself is astonishingly luxurious, this magnificent mansion, built in 1667, was once home to the mayor of Amsterdam and other prominent people. Before the Cat Museum opened, the building underwent nearly five years of restoration and restoration of the interiors. And now you can see it in all its glory: parquet floor, wooden panels and ceilings, old quality furniture, embossed leather wallpaper, mirrors in gilded frames; you can go up to another floor with wooden stairs with lacquered handrails. 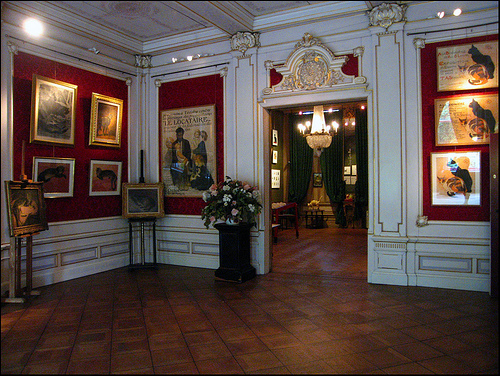 Amsterdam’s Cat Museum has everything a solid, old, Dutch mansion should have: a ballroom, dining room, music room, library with books about cats. And the walls, tables, shelves, mantelpiece and special stands are filled with a variety of cats. What only cats will not meet the visitors of the “Cat Room”: the statue cats made of wood and bronze, porcelain and ceramic cat sculptures, cat pictures, engravings and poster cats, tapestry cats and embroidery cats, fan cats and stage costumes cats (the same ones for the famous musical “Cats”). Here you can see pictures of famous people with their cats. Or maybe the opposite, pictures of cats with their famous owners? 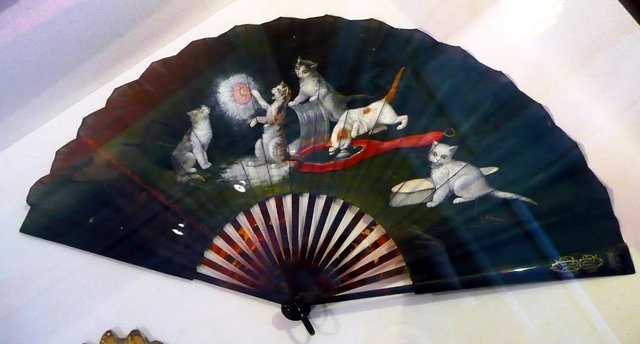 In the museum you can see cats of all times and peoples, cats from all continents and the most distant countries. There are cats created by unknown craftsmen, and there are cats depicted by famous masters like Rembrandt, Picasso… There are works, which in their work turned to the cat more than once, such as Sol Meyer.

Born into a respectable family, Sol did not follow in the footsteps of his parent, a diamond merchant, and traded his treasures for painting, which from a simple hobby has turned into a lifelong business! One of Saul’s favorite subjects was the image of cats, and when his paintings became famous and popular by his old age, art critics respectfully called him “the feline Raphael.” 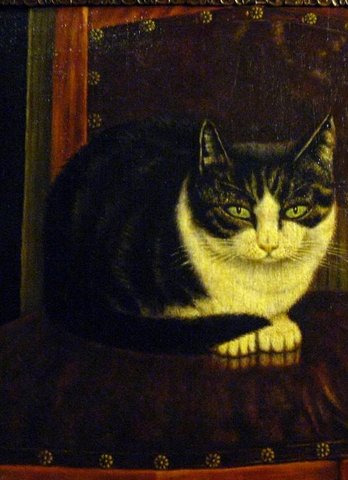 The ballroom itself is named after Theodore Alexander Steinlein, who began his artistic journey as an ordinary draftsman graphic artist and later became one of the founders of the modern poster. And not without the help of a cat! It was Steinlein who once drew the famous poster for the equally famous Montmartre cabaret, The Black Cat. 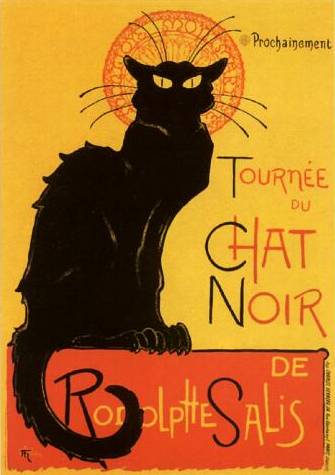 The French surrealist Léonore Fini was often compared to a cat by her contemporaries for her willful character and charming grace. In many of Leonore’s paintings you can see cats, and her favorite painting was “Sunday afternoon,” with which she never parted, and even when traveling always took the picture with her. It is an impressive painting that depicts such strong and intelligent cats that it makes you wonder who the pet is here. 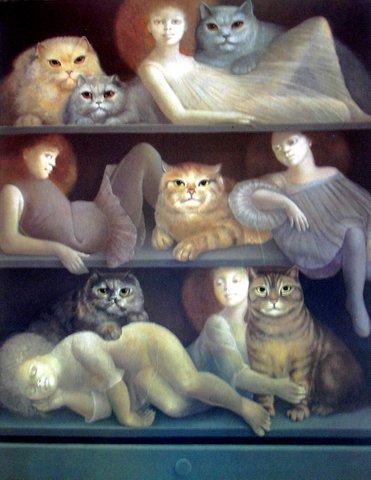 As you walk through the amazing rooms of the Cat Museum, don’t forget to look out the window at the garden patio. It, in the old Dutch architectural tradition, is hidden from view from the street. There in the green garden are garden sculptures of graceful cats, which are not afraid of atmospheric influences. And also in this green French-style garden you can find fluffy cats and cats that “walk by themselves” here.

The Cat Cabinet in Amsterdam 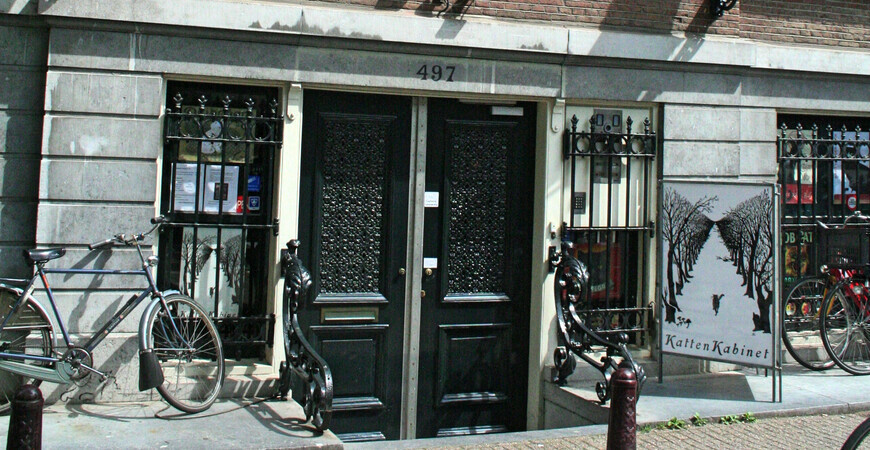 The Cat Cabinet is the name of a unique art museum in Amsterdam. Its collection includes paintings, drawings, sculptures, photographs and other works of visual art devoted to cats. Among the 3,000 exhibits are works by such masters as Rembrandt, Pablo Picasso, Henri Toulouse-Lautrec and Theophile-Alexander Steinlen. The Cat Museum is not usually on the standard tourist itinerary. However, many Amsterdamers know about it and recommend it for a visit. KattenKabinet has existed since 1990. It was founded by local financier Bob Meyer in memory of his much-loved ginger cat, who was nicknamed John Pierpont Morgan. Images of this special tailed friend are also on display.

KattenKabinet is located in an old building by the canal at Herengracht 497. This house is a landmark in its own right. It’s hard to believe now, but once the neighboring buildings numbered 497 and 499 looked exactly the same. They were built in the second half of the 17th century for brothers William and Adrian van Loon. It was decided by lot that William would get number 497 and Adrian 499. The van Loon family owned the building until 1725. After that, the owners periodically changed. For some time the mayor Jan Kalken lived in the house. In 1885, the banker Peter van Egen bought the building. It was on his initiative that the largest facade alterations were made. Bob Meyer moved into the building in the 1980s. He set up living quarters on the second floor and set up a cat memorial on the first floor, which later became the Cat Museum.

The Feline Study in Amsterdam was created by Bob Meyer in memory of his ginger cat John Pierpont Morgan, named after the famous banker and entrepreneur from the United States.

Morgan, a cat with an extraordinary character, lived with his master for 17 years, from 1966 to 1983. For Meyer, a very intelligent, intelligent and willful animal became a true friend and companion.

Every five years Morgan “received” from his master expensive, but extremely useless from the cat’s point of view gifts. In honor of his fifth birthday, the artist Ansel Sandberg painted a portrait of him. For his tenth birthday, Meyer ordered a bronze sculpture for his pet. And the cat had to spend time posing. To celebrate his fifteenth birthday, the cauda equina was presented with a book of 50 limericks (five lines of absurd content). It is easy to guess who the main character of these poems. That same year, Aart Clerk created a portrait in which Morgan took the place of George Washington on the American dollar bill. The inscription “We Trust in God” was replaced by “We Don’t Trust the Dog.” All of these gifts, except the sculpture, can be seen in the museum today. Unfortunately, the bronze statue was stolen before the CattenCabinet even opened.

The CattenCabinet collection is dedicated to images of cats in art and culture. Furry animals have been of interest at all times. Their images have often slipped in with the greatest masters of painting and sculpture. Currently, the fund of the Museum of Cats already numbers more than 3,000 items. Meyer collected them all over the world. Among the exhibits is even a few canvases by the Russian painter Nikolai Tarkhov, whose peak creativity came at the end of the XIX – beginning of the XX century.

Among the sculptural works, “Cat in Boots”, “The Skinniest Cat” and “Lord of the Dumpster” are of particular interest to visitors.

Exhibits also include furniture pieces decorated with figures or drawings of cats. The walls of the museum are hung with numerous posters showing the cat theme in great detail. There is a small store in the museum where you can buy duplicates of the pictures you like. Books, postcards and other souvenirs are also sold there.

How to get to the Cat Cabinet in Amsterdam

The Amsterdam Cat Museum is located in the heart of the city. It can be reached on foot, by public transportation, or by car.

For those already in the city center, the easiest way to get there is simply to walk to the intersection of the Heerengracht Canal and the Vijzelstraat.

The nearest metro station is “Rokin”. From there it is only about a 5-7 minute walk to the museum.

Travel by other means of public transport is no less comfortable. About 500 meters away is the stop “Rembrandtplein”, through which streetcars number 4, 14 and buses number 85 and 87.

When traveling by car to the Herengracht Canal, you can leave from the streets Vijzelstraat, Reguliersgracht or Amstel and then follow it to the museum building.

Tourists also often use a cab. The most convenient to call and understandable in terms of tariffs is an online service Uber.

KattenKabinet is open seven days a week. In order not to lose time at the ticket office, you can buy tickets in advance online.