On the Greek island of Kefalonia, twenty minutes from Argostoli, lies the legendary Melissani Cave, which contains in its depths an underground lake of amazing beauty of the same name.

The cave Lake Melissani: the real embodiment of the legend of the enamored nymph

On the Greek island of Kefalonia, just twenty minutes from Argostoli, lies the legendary Melissani cave, which contains an underground lake of amazing beauty of the same name. It was discovered in 1951 by a local resident, Yannis Petrochilos.

For tens of thousands of years, the sea water tunneled through the limestone rock away from the shore until a magnificent 160-meter wide cave was formed, almost 50 meters long. The most picturesque are the two majestic grottoes. In the center of the dome of one of them a huge hole is gaping – the result of an earthquake in 1953. The walls of the cave are overgrown with huge stalactites and stalagmites that cast bizarre shadows. The stalactites are estimated to be about 20,000 years old.

The uniqueness of the cave is that it is almost entirely filled with underground lake of the purest water. Floating in a boat, you have a mesmerizing sensation of floating in the air, because the water is not visible due to its incredible transparency. At a depth of a few meters you can clearly see every pebble at the bottom of the lake.

The natural entrance to the cave, measuring 40×50 meters, was formed by the collapse of part of the wall. The lake itself is at a depth of 20 meters from the surface. You can go down to the boat dock by a special passage. There begins the boat tour, first in the open and then in a closed grotto. The depth of the lake varies from 10 to 40 meters in some places.

The most stunning spectacle awaits tourists when you visit the first grotto. From above through the break the sun’s rays fall, refracting on the transparent surface of the lake diamond sparks. Lift your head and you can see the roots of growing trees and a piece of blue sky framed by the emerald greenery of their crowns.

In the second grotto, there is a small island in the middle of the water surface. It is there that archaeologists found the ancient artifacts mentioned below.

The Lake of Burning Tears: truth and fiction

In ancient times the Melissani cave was surrounded by a dense, lush forest and was considered sacred. The priests held religious rites here and worshipped the patron of hunters and shepherds, the forest god Pan. Archaeologists found in the cave clay statuettes with his image, as well as stone disks with drawings of female figures – nymphs.

Consequently, there are several theories about the origin of this amazing underground lake.

The Legend of the Nymph

According to an ancient legend, the nymphs lived in the cave. One of them, Melissani, fell in love with Pan, and from unrequited love drowned herself in the cave in the lake of her own tears. After her death both the cave and the lake were named after her.

Absolutely unromantic is the dry scientific theory of the origin of Lake Melissani, categorically put forward by scientists. They proved that the reason for the appearance of this underground body of water is the usual dissolution of rocks by sea and fresh water (but the salty tears of the nymph have nothing to do with it). The lake is fed by seawater, passing more than ten kilometers from the ocean through the eroded rock and returning back into the bosom of the ocean.

Boat trips have been offered in Melissani since 1963 by local boat guides. The entire trip back and forth across the lake takes no more than ten minutes, but will be an unforgettable experience for years to come. The pier with free boats is located inside the cave, where the trail leads on foot among the rocky debris and boulders. Then under the ground is the descent through a narrow tunnel to the lake.

It is desirable to choose a sunny weather for the water walk to feel all the charms of an incredibly beautiful sight. At noon the sun’s rays fall on the surface of the lake, so the water is colored by all kinds of shades of blue and emerald. The best pictures are taken at this time. The boats seem to hang in the sky, as the water column is invisible because of its crystal clarity.

For resting and refreshment you can choose a place Karavomilos, a few kilometers from the cave. It has everything you need: a couple of cafes in the shade of the trees, an alley of picturesque plane-trees, where you can hide from the heat. There is a small pond with waterfowl and playground for children. A boardwalk is thrown over the stream that carries water to the underground Lake Melissani.

In the video you can watch a tour of the lake. The girl is reporting in Greek, but I think the views of the cave speak for themselves).

The cave is located 2 km from the town of Sami:

When can you visit the cave

The Nymphs’ Cave with the beautiful and mysterious Lake Melissani is a must-see when visiting Kefalonia. If you want to visit this magical lake and many other interesting places, book tours to Greece from Kharkov on the website poehalisnami.kharkov.ua/ref/greece/.

This piece of sushi is a popular destination among those who want to see on.

Today I want to introduce you to the notes on Greece by publicist Eugene Panov. From e.

In the west of mainland Greece is the nome of Etoloakarnania, the official name. 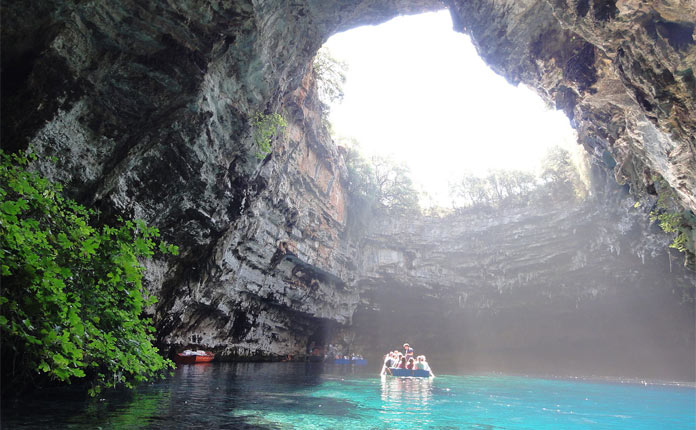 Melissani is an incredibly picturesque cave lake located on one of the Ionian Islands. It is considered one of the most beautiful among the natural attractions of Greece. Looking at the photos it is hard to disagree with this. The transparent azure lake, the cave with grottoes and bizarre stalactite formations, ancient myths – these are the main reasons why thousands of tourists seek to see this place. In ancient times, the cave was used for pagan rituals, then it was forgotten for several centuries. Melissani was rediscovered only in the 1950s. Today – it is a popular tourist attraction, a brief description of which you can read below.

A surprisingly beautiful cave and lake are located on the island of Kefalonia (east coast). The distance from the main city of Argostolion is 28 km. The nearest town Sami is 2 km. The distance to Athens is 270 km.

From Athens, there are two daily flights to the island.

The history of Melissani

Scientists believe that the age of the cave lake is 20,000 years old. The karst cave was formed by water. The main feature of Melissani is the hole in the dome, appeared later. Four thousand years ago there was a strong earthquake and part of the cave collapsed, creating a hole through which the sun’s rays enter. At different times of the day they illuminate the lake, giving the water different shades, from light azure to almost black. The walls of the cave also look unusual and mysterious thanks to such illumination. 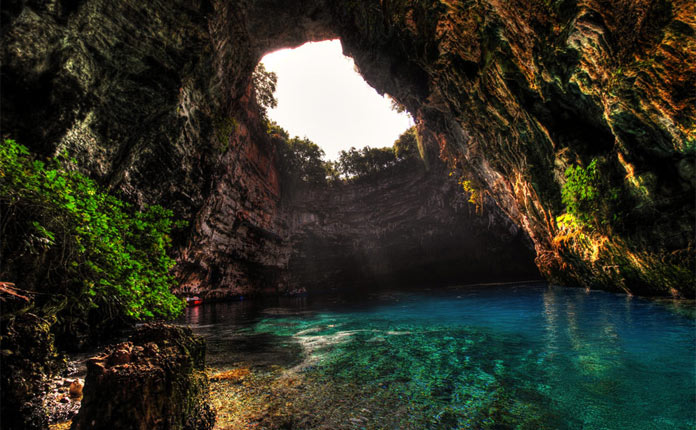 In ancient times, the locals believed that the nymphs lived in the cave and conducted pagan rituals. This was confirmed by the findings of archaeologists. Clay discs with images of nymphs and figurines of the god Pan were found, their age is approximately 5-6 thousand years.See the artifacts found in Melissani can be seen in the Argostolio Museum of Archaeology. Historians believe that not everyone knew about the cave, its location was kept secret. Perhaps that is why, over time, the cave was simply forgotten about for a very long time.

Rediscovery of the cave

In the 1950s, the cave was accidentally discovered by a local shepherd, he reported his discovery to the authorities. The study began, and it was then that the objects of a pagan cult were found. It took scientists more than 10 years to study the cave. Then it was opened to tourists in 1963.

And of course, this amazing place could not remain without myths.

The Myth of Nymph

The cave bears the name of the nymph Milissanti, who fell in love with the god Pan. She sat in the cave for a long time crying of her unhappy love. She cried a whole lake in which she drowned herself with grief. That’s why the lake water is salty.

This is interesting. Pan is the god of fertility, cattle breeding and wildlife. He was noted for his cheerful disposition and increased lovemaking. He had goat legs and horns. Nymphs were spirits of nature who looked like beautiful girls. They were responsible for rivers, seas, mountains, caves, and forests.

According to Wikipedia, the cave has a length of 160 m, its width is almost 40 m . The average depth of the lake is 14m, there are places up to 30m. The water is clean and transparent, you can see the bottom. The water level is maintained thanks to a rather rare phenomenon – it is fed by the water of the Ionian Sea. The water enters the ground at a distance of 14 km from the cave. This distance it covers in 2 weeks. To get into the lake, the sea water passes a difficult path – it breaks through the land, flows through the channels, loses some salt, passing through these natural filters. After passing this way and being in the cave lake, the sea water flows back into the sea. 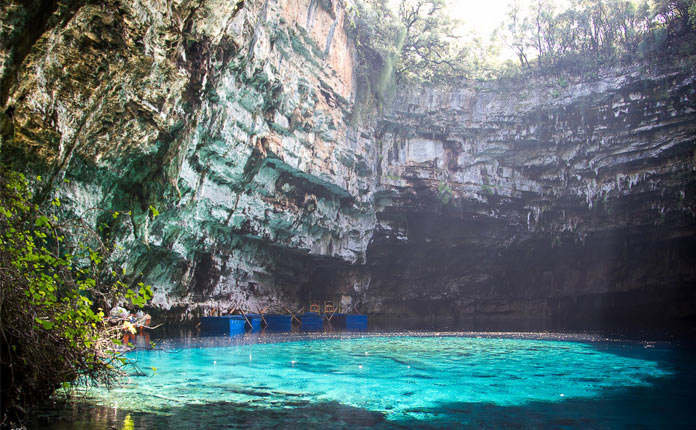 But the main thing, of course, is just the amazing beauty of the cave and the lake . Transparent water, changing color with the time of day. Mysterious cave, the walls of which are covered with stalactite formations of the most bizarre shapes. The hole in the dome allowing the sunlight to get into the cave. The combination of all these factors makes Melissani one of the most beautiful natural attractions in Greece.

The island of Kefalonia became a popular European resort in the 1980s. It was then that mass visits to the cave lake began. Tourists enter the cave through a tunnel. They come out to a small boat dock. The trip around the lake is by boat. The tour lasts about 15 minutes. It is enough to see two cave halls, a small island, and walls with stalactites. From the side it seems that the boats are not floating on the water, and float in the air.Nature has worked in this place in the glory. According to the reviews of tourists, just a fascinating sight.

Near the cave there is a cafe and a souvenir store. At 1 km is the village Karavomilos, there are hotels and beach. 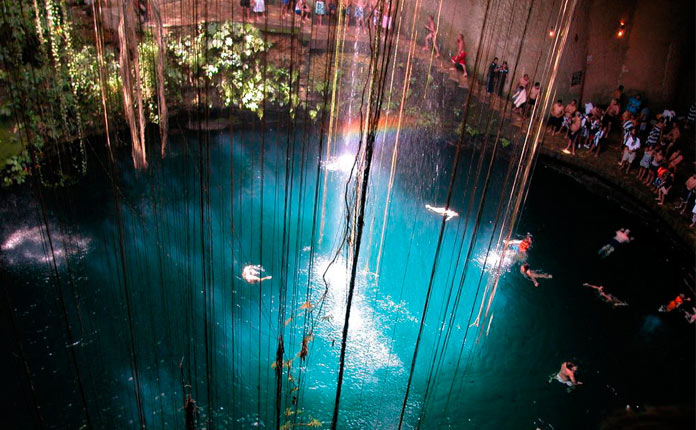 The island of Kefalonia is small but there is a lot to see.

Melissani is a unique natural attraction. Thousands of tourists visit this place to see the combination of a clear lake and cave walls, illuminated by the sunlight. The legends associated with this mysterious cave are also interesting.

✓Tripster is the largest online tour booking service in Russia.

✓Travelata.ru – search for the most profitable tours among 120 reliable tour operators.

✓Aviasales.ru – search and compare airfare prices among 100 agencies and 728 airlines.

✓Hotelook.ru – hotel search engine around the world. It compares prices from many booking systems, finding the best.

✓Airbnb.ru – the world’s most popular landlord rental service (often more convenient and cheaper than a hotel). Follow this link and get a gift of $25 for your first booking.