Central Museum of Tauris in Simferopol

If you want to find out more about Crimea’s past and the traditions of the people who used to live here, you should visit the Central Museum of Tauris in Simferopol. Its collection is considered one of the most interesting in the region. There are over 150 thousand exhibits stored here: numismatics collection, unique samples of 18-19 centuries’ graphics with views of the peninsula, clothes, household goods and art objects of different peoples living on the peninsula.

The Central Museum of Tavrida is the biggest museum of local lore in Crimea. Along with regional history, it tells also about its nature: landscapes, resources, flora and fauna.

The building of the Taurida Museum is an architectural monument and an object of cultural heritage. Photo: Vitaly PARUBOV, “KP”-Krym” The Central Museum of the Tauris is the largest museum of local lore in Crimea. Photo: Anastasia MEDYNTSEVA, “KP”-“Crimea”.

Probably the most interesting exposition of the Tavrida museum is located on the first floor and has an intriguing name “Golden Pantry”. There are unique pieces of jewelry, clothing details, accessories, coins and cult objects made of precious metals. In 2018, the collection of the “Golden Pantry” was renewed – there is an exhibition of ancient artifacts found in Crimea by “black” archaeologists and seized by the Federal Security Service.

The exposition of the second floor is devoted to the nature of the Crimea, its landscapes and geology. Halls of the third floor tell about the peninsula’s past: ancient and medieval periods, Russian-Turkish and civil wars, times of Taurida Governorate and the Crimean ASSR.

The Central Museum of Tavrida at different times of the year

The exhibitions in the museum are regularly renewed. So there is always something to see, no matter when you decide to come here.

Winter is the best time to visit the museum. You can spend dark and dank winter evenings wandering through the exhibition halls and listening to the guide’s fascinating story (the Taurida Museum offers daily guided tours).

Part of the museum collection is placed in the courtyard. In warm seasons – late spring, summer and early autumn – it is especially pleasant to take a walk here, looking at unique exhibits: stone idols, Scythian tombstones, gravestones with images and inscriptions, fragments of altars and architectural structures.

Where to make a beautiful photo 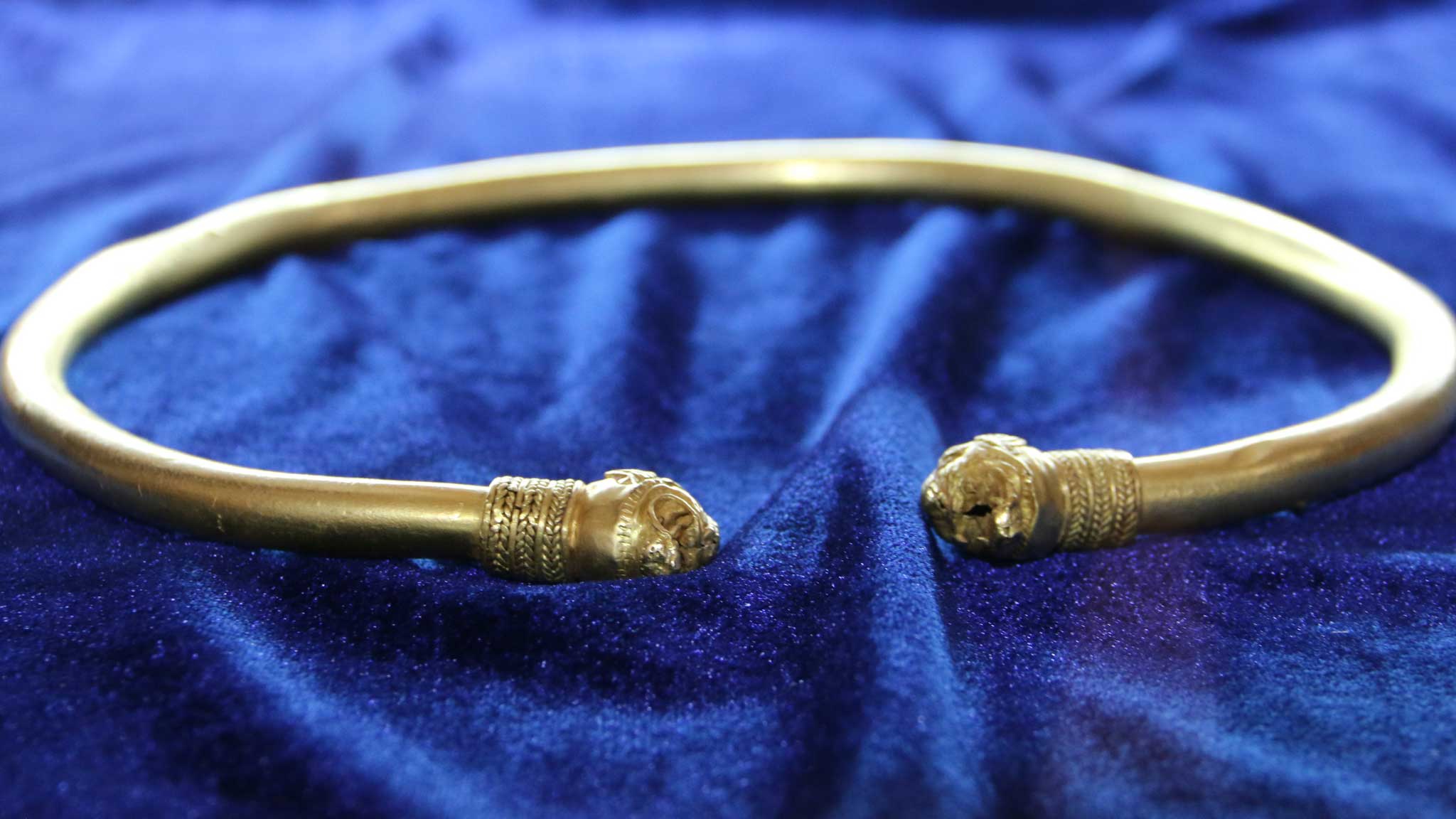 You can take interesting pictures against the exposition of the Golden Pantry. Photo: Anastasia MEDYNTSEVA, “KP”-“Crimea

You can take interesting pictures against the expositions of the Golden Pantry. Unusual shots are obtained in the Lapidarium – a courtyard with stone exhibits. Be sure to take a picture of the museum building, an architectural and heritage site. After visiting the museum go for a walk in the Seminary park behind it. It’s a romantic place to take pictures under the shade of the trees.

What to see at the Central Museum of Tavrida in Simferopol

The Central Museum of Tauris is the main historical and archeological museum of Crimea, dedicated to preserving the cultural heritage and natural riches of the peninsula.

The Central Museum of Tauris is located in the capital of the Republic of Crimea, Simferopol, at 14 Gogol Street.

How to get to the Central Museum

The museum is located in the central part of the city next to the Seminary Park and close to the K. Trenev Park, the Gogol Theater and the Museum of History of Simferopol. You can get to the Tavrida Museum by several types of public transport:

History of the Crimean Museum

The history of the modern museum dates back to two institutions: The Museum of Antiquities (1887) under the administration of the Tauris Scientific Archival Commission and the Zemstvo Natural History Museum (1899). The collection of the Museum of Antiquities was replenished with the donations of Crimean residents; the names of the donors could be found in annual reports, which were published by the TUAC. These were various cultural and historical artifacts: coins, pottery, maps, engravings, manuscripts and other art and life objects of different epochs and peoples, who had lived in Crimea.

The funds of the Natural History Museum were replenished with the help of independent expeditions. The exposition of the museum represented objects of natural origin: minerals, stuffed animals and birds, ancient fossils, prehistoric animal remains, etc. Both museums suffered from lack of space.

Both museums suffered from the lack of space for full exhibitions. The idea of union was born before the Revolution, but it was realized only in 1921, which should be considered the birth year of the Tavrida Museum. The museum was located in two buildings: former maiden shelter of countess Adlerberg and the building of Officers’ Assembly.

After the World War II the museum was renamed the Crimean Local History Museum. During the Perestroika the museum was given a pre-revolutionary building at Gogol Street, 18. It again received its historic name. The Tavrida Museum not only exhibits items in the central building, but also organizes guest exhibitions on the territory of the Crimea and in other regions of Russia. Besides the main building the complex of the Taurida Museum also owns:

Today the Central Museum of Tavrida has a collection of over 100,000 items, which are related to the material, natural and spiritual history of Crimea, from the Paleolithic Age until the present day. This is the largest collection of objects from all epochs on the peninsula’s territory, gathered during archeological expeditions and with donations from citizens concerned. The museum also keeps personal archives of such famous Crimean explorers as Christian Steven, Alexander Berthier-Delagard and Piotr Koeppen.

Of special value is the library “Tavrika”, which keeps more than 40 thousand volumes on the history and archeology of the region, as well as old books and manuscripts. Among them there are handwritten Pentateuch of XI century, volumes of Elsevier edition (XV century), Russian spiritual books and other works of great historical and cultural value.

All halls of the museum

Altogether there are several permanent exhibitions in the museum:

“Tavrida’s Past” – a collection of archaeological finds from the Paleolithic to the late Middle Ages (products of stone, bone, iron and bronze, the history of ancient peoples who inhabited the Crimea from the ancient era to the Great Migration of Peoples);

“Golden Pantry” – a collection of historical articles of precious metals and stones from the II century BC to the XV century;

“Lapidarium” – a collection of tombstones, steles, slabs of different epochs and peoples, from exhibits of antiquity and Polovtsian stone women to sculptures of the 19th century;

“Crimea during the Russian-Turkish wars” – a collection of military articles of the 16th-18th centuries, including items found on the battlefields (cold steel and firearms, banners, maps, bullets, kernels, body crosses, etc.)

the exhibition “Tauride Province” is dedicated to the history of the peninsula from the end of the 18th century to the Revolution of 1917 when it was a part of the Russian Empire;

“Crimea during the Great Patriotic War” – a collection of items related to the most important battles on the peninsula and the period of occupation.

There are 2 museum expositions, devoted to the natural history of the Crimean peninsula:

“Nature of the Crimea: paleontology, geology, relief” – samples of minerals, minerals and rocks of the peninsula, fossils of plants and animals of the prehistoric era;

“Protected landscapes of Crimea” – collection of flora and fauna exhibits, typical for different landscape zones of the peninsula.

Along with permanent exhibitions there are also temporary thematic exhibitions, devoted to the history of the Crimean peninsula. For instance, there is a virtual one-exhibit “Rarity” hall, in which a single exhibit item is presented in an informal light and changes from time to time.

The Central Museum of Tauris is one of the main attractions in Simferopol – a relatively young and not very rich in historical monuments. It is this museum that manages to embody the whole history of the Crimea and its natural riches.