Tatar cuisine is famous for its pastries and complicated names of dishes for the ear. But this, of course, does not stop gastro-enthusiasts. More and more people, going to Tatarstan, want to discover all facets of the national cuisine.

When planning such a gastronomic tour, visit the Chak-chak Museum in Kazan, dedicated to the main delicacy of the whole republic. They will not only feed you with tea and feed you the beloved Tatar sweet, but also teach you how to make it. The museum is located in the Old Tatarskaya Sloboda – a historical area, which is almost entirely composed of merchant houses of the 19th and 20th centuries.

The Chak-chak Museum in Kazan is a private one, created by enthusiasts with their own money. Many of the items that make up the exhibition either belong to the creators’ families or were donated by the townspeople. Now ongoing restoration of some of the rooms of the house in which the museum is located, so not all rooms are open to visitors.

READ
Museum of the History of Cognac in Moscow, description and tasting

The bright, gingerbread house attracts the eye. Chak-chak Museum in Kazan occupies a historical building – it is a merchant’s house of the 19th century, a restored architectural monument. Just as it used to be, there are two entrances here – for men and for women, but everyone enters the museum through the common doors, regardless of gender. 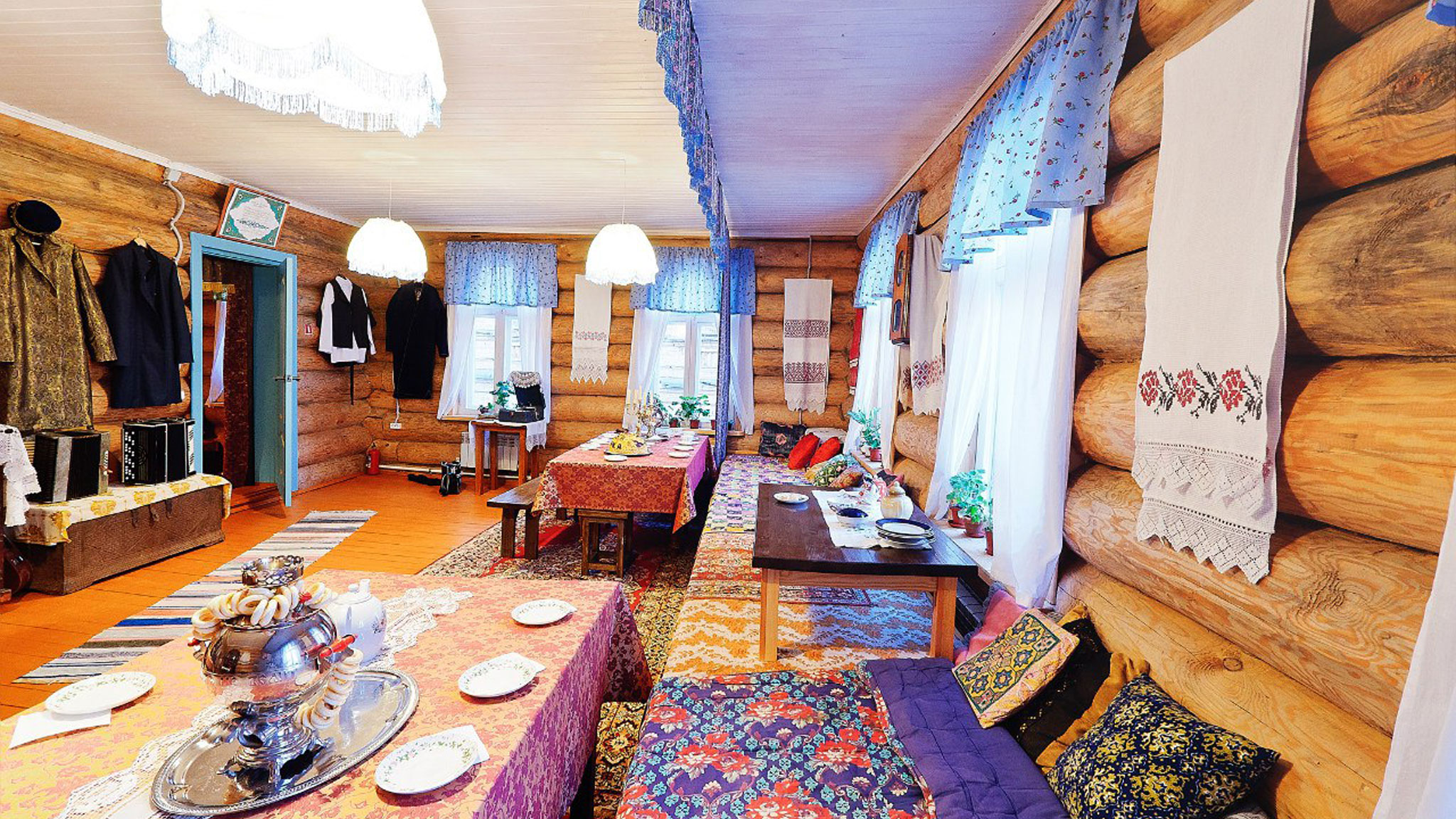 The vibrant interior of the museum is like a place for beautiful photographs – you want to take pictures at every step. Photo: Chak-chak Museum

When you get to the Chak Chak Museum, you feel like you’re visiting a wealthy Tatar family from the early 20th century. This feeling will only intensify when you are asked to take off your shoes and wash your hands at the entrance. Guests of the museum listen to a fascinating story about chak-chak in the recreated interior. Fabrics, furniture, dishes – everything here has its own history.

At the master class you will learn the secrets of cooking the main Tatar sweet. Photo: Nurmukhammad SHAMS, commons.wikimedia.org

Go to the master class, it’s paid for separately, but it’s worth it. You’ll make chak-chak in the kitchen in the company of artisans dressed in traditional Tatar clothing. They will not give you an exact recipe, you will have to mix the ingredients by eye, listening to your own feelings. But the tricks of cooking will be shared with you, and you can repeat the dish at home, too. Master-classes are held in groups of 6-7 people, so a homely atmosphere is guaranteed.

Chak-chak Museum in Kazan is named after the national dish – a fragrant sweet chak-chak, which is a symbol of Tatar hospitality. Here you can get acquainted with national customs, legends, and everyday life of Kazan prosperous families who lived 100-150 years ago, and taste the chak-chak, handmade according to an ancient recipe.

Information about the museum

The exposition was created in 2014 at the initiative and with their own funds of the couple D. Polosin and R. Suleymanova. They restored the life of the Tatar merchant class of the late 19th – early 20th centuries by photos of that time, books of ethnographers-travelers, encyclopedist Kayum Nasyri and other historical documents. D. Polosin and R. Suleimanova told about the traditions of the Tatar people through chak-chak, which is indispensable for Sabantuy, matchmaking, weddings, anniversaries and other festive tea-parties.

Chak-chak is a dish that not a single holiday of the Tatar people goes without.

The spouses were awarded state awards for the successful implementation of the idea. And the museum itself, which belongs to the historical, domestic and ethnographic, every year since 2014 wins national and all-Russian tourist competitions.

For example, it took 4 first places in the international gastronomic contest Tour-taste in the categories:

Since 2015, the museum is located at the address: Paris Commune Street, house number 18 – it is the center of Starotatarskaya Sloboda. The museum building is an architectural monument, built in the 30s of the nineteenth century, belonged to the merchant Bigaev. In 2015, it was restored by the Ministry of Forestry. The basement of the house is made of stone, and above it there are 2 floors of wood.

Attendance of the museum is growing: if in the first 2 years 7.5 thousand people came for a tour, then only for 10 days of the New Year vacations in 2019 – 1.4 thousand.

The entrance to the building is in the courtyard. The two doors in the end used to lead to separate – male and female – halves of the house. The exhibition is located on the second floor, where there is a steep staircase. One should take his shoes off at the entrance. The wooden floor is covered with soft homespun mats.

READ
Tula samovars museum in Tula, How to get there and exposition

The interior of the museum in Kazan.

The main part of the interior items are the originals, the rest are exact copies. The museum has no storage room, and in the rooms where the exhibits are, there are no showcases and fence posts. Objects can be photographed and most are allowed to be touched, tried out in action or viewed by holding them in one’s hands.

Chak-chak museum is not an exhibition of things, but a museum of impressions. The rooms are decorated in such a way that they look lived in, and the sightseers already feel like guests on the doorstep.

Excursions and their prices

Groups are formed of 8-10 people. Guests are greeted by a girl-guide in national costume and, when they are seated around the table, begins the story.

Excursion to the museum, meeting of the guests.

The topics of the excursions change seasonally, the guide tells:

The visitor can wear the national costume and take pictures in it. In the second room is a table with tea and chak-chak. You can also try other sweets. The tour lasts 1 hour. It is conducted in Russian, and at the request of visitors – in Tatar or English. The museum provides a lesson of a professional on how to make chak-chak.

There are privileges for labor veterans and disabled people.

On weekdays visitors can use the parking lot for free, on weekends – with payment at the parking lot. It is recommended to sign up for a tour in advance by phone. The museum’s official website presents photos of the exhibit.

READ
Museum of cunning and wit in Pereslavl-Zalessky

Master class can be attended by 6-7 people at a time, the kitchen does not allow to accommodate a larger group. Chak-chak is a deep-fried pieces of unleavened dough, which are then poured and fastened with honey syrup. Masters teach how to prepare the dough, feel its readiness for frying, etc.

The master class lasts 1 hour. You can take chak-chak cooked by yourself or drink tea with it in the cozy home atmosphere of the museum.

The shop is located at the entrance, on the 1st floor of the museum. Here you can buy:

Chak-chak can be stored for up to 3 months.

Working hours and how to get there

Nearby there are routes:

The distance from the nearest stops to the museum:

The nearest metro station is Tukai Square. From it you need to exit to Pushkin Street and move so that the lake Nizhny Kaban is on the left side. Behind it there are fountains, sculptures, dedicated to the characters of Pushkin’s fairy tale (Chert and Balda), and the building of Kamal Theater. Go around it on the right and along Moskovskaya Street head in the direction of the minaret of Nurullah Mosque (its green roof is visible from afar). Behind the mosque there is a pedestrian street of Paris Commune.